Last year the first KONgres took place. It was the first Polish convention for conrunners. This year it was held again in Wrocław and was both similar to and different than the previous year. It was much smaller than in 2017 when it was a new idea. Now it didn’t have the freshness but still there were over 80 members what, I believe, is a decent number for this kind of event.

This year KONgres was starting on the Friday evening. At first I was going to attend the first programme items but unfortunately, I didn’t manage to do so. It was a pity as the opening ceremony (followed by a debate) took place in the historical Town Hall of Wrocław. It is a lovely building and I really regret I couldn’t visit it. 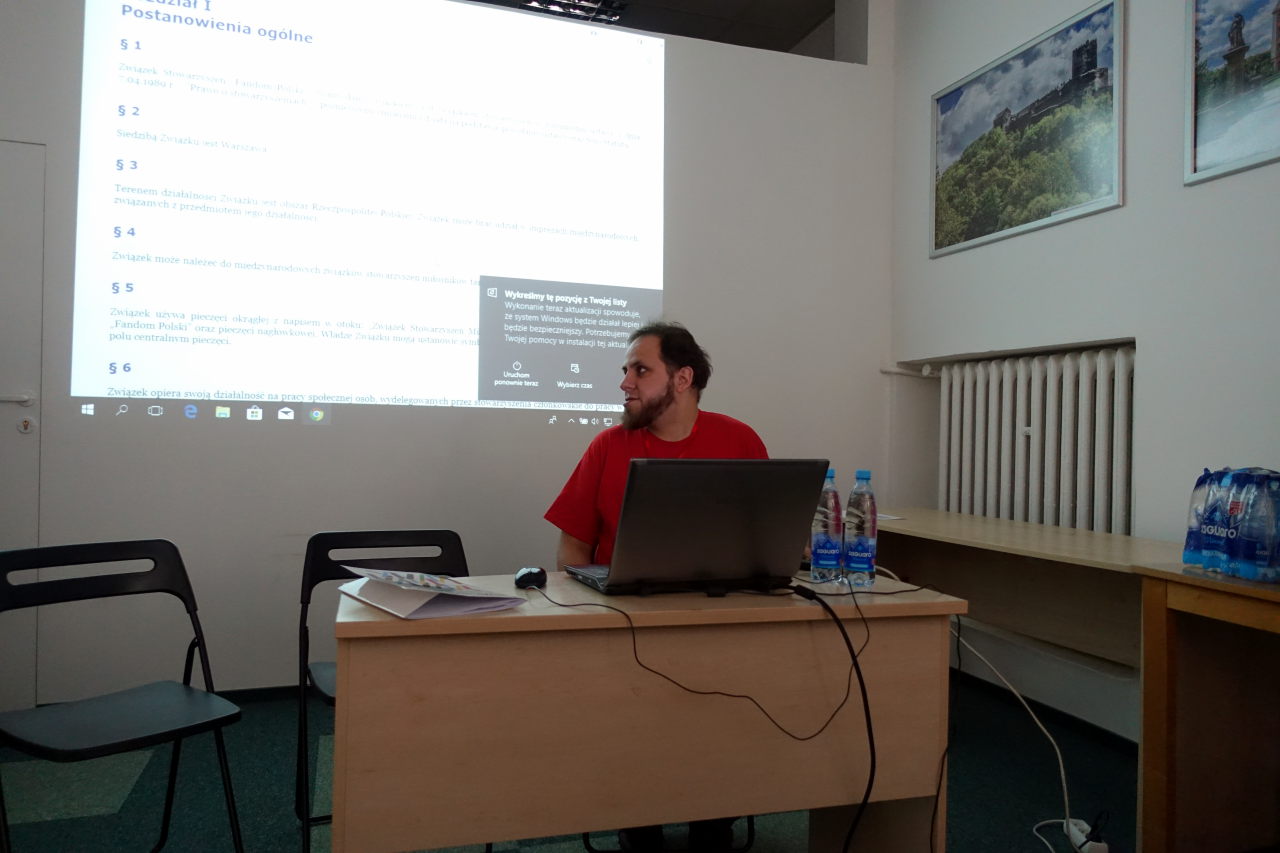 Saturday programme was starting late – at 12:00 what, I believe, is a little bit too late (especially considering that for many members it was the second day of the con). At this hour we had a Fandom Council that was quite constructive and although it lasted for two hours, we didn’t have time to discuss everything we wanted to.

After the Fandom Council I participated in a new (for me) type of a programme item – Q & A session with an expert. It was dedicated to the Polish law and conrunning. Later I participated in other types of programme items. What I was missing were panels. There were not enough of those and not all of them were meeting my interests. The truth is that the last year there were much more panels and if I recall correctly, the evaluation performed by concom showed that people preferred other types of items. I’m afraid that there is no way to create a con that will be perfect for everyone. 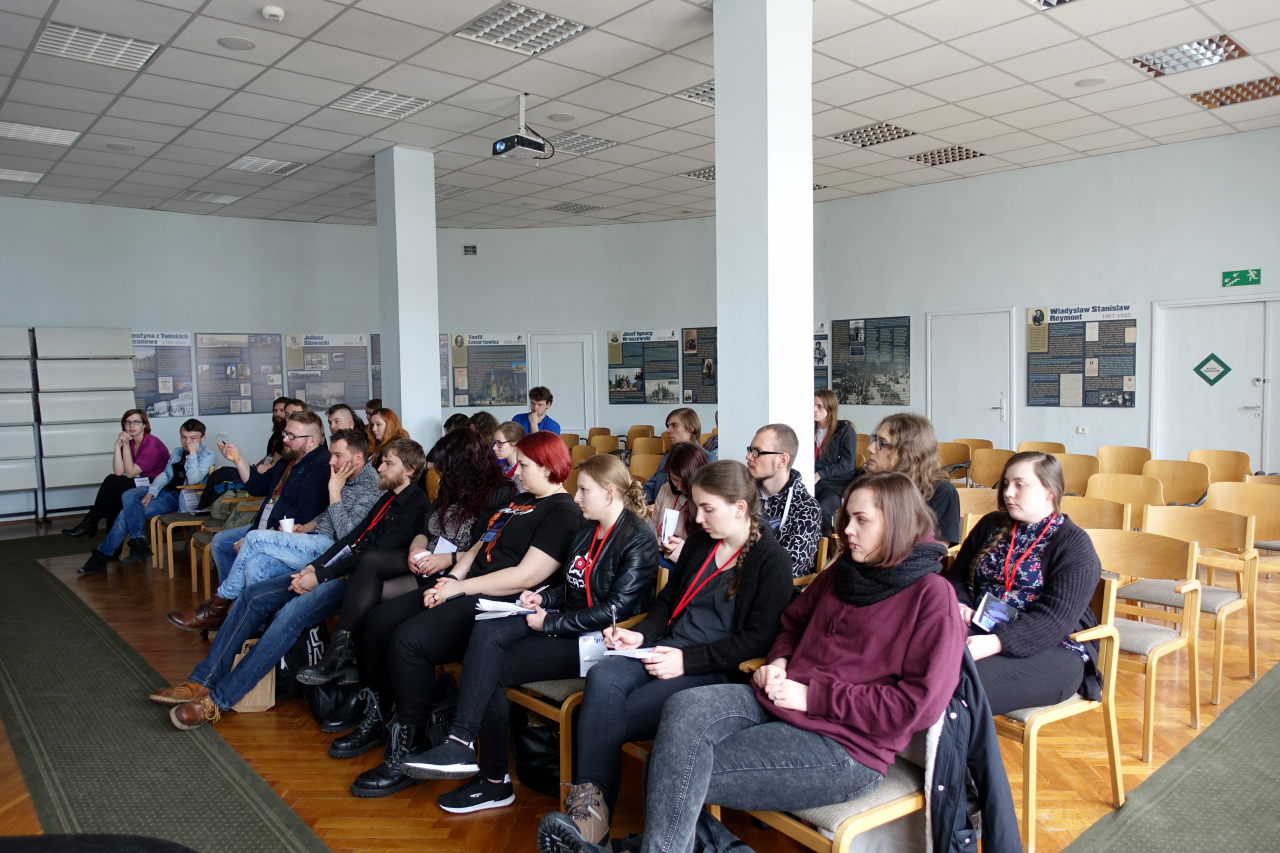 Q&A session regarding liability of the conrunners

I really enjoy the way KONgres is handling the lunch break. Similarly as the last year, it was possible to order food together with a membership. It was simple stuff – a sandwich and a good soup but it is a great solution. You don’t need to run around the city to find something to eat and, what is more important, eating together gives you an opportunity to talk with fellow organizers. I managed to exchange some words with my friends and also meet new people. 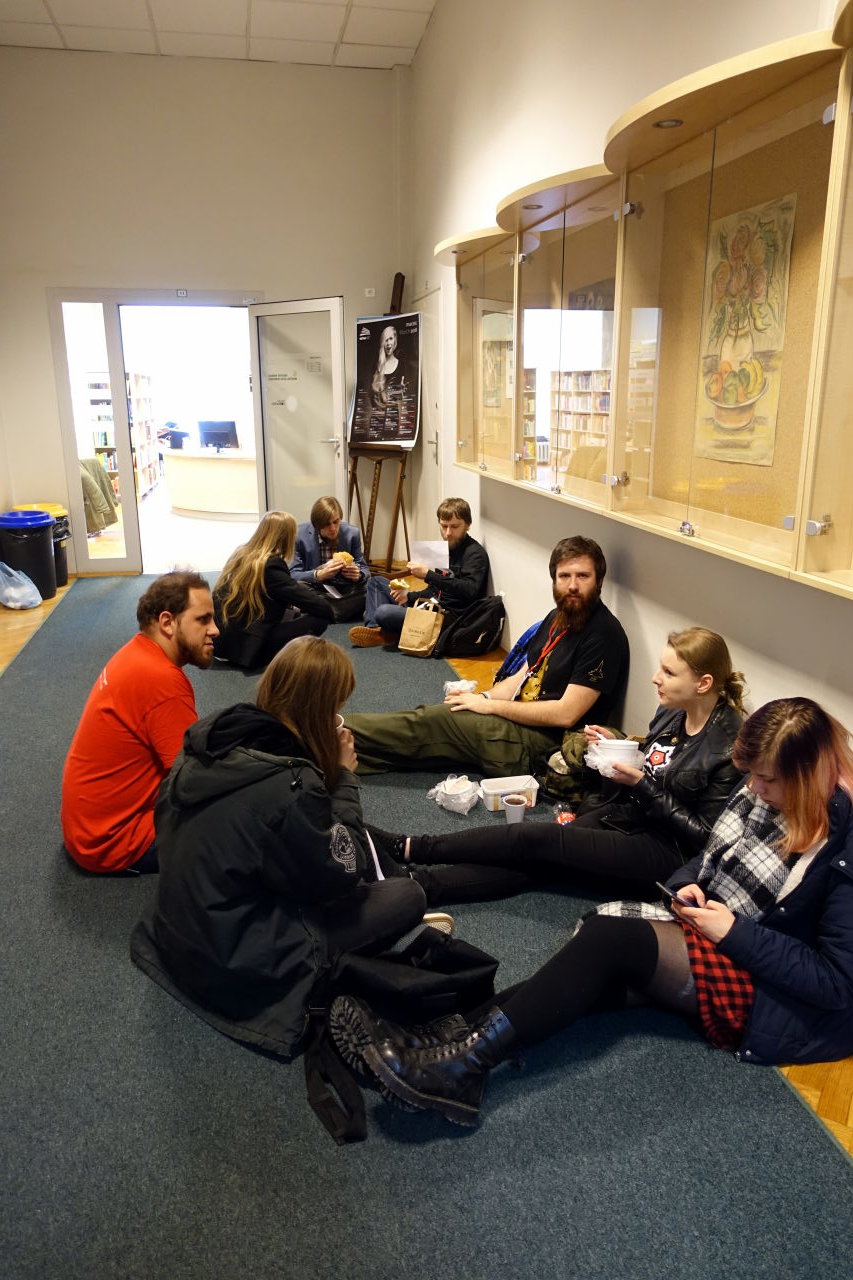 Some of members decided to had the lunch on the corridor

The social aspect of the con doesn’t end at lunch. After the programme on Friday and Saturday there was an official pub evening. The pub was 15 minutes walk from the con. It was a nice place. I didn’t visit it on Friday but Saturday evening was quite busy for the bartenders. I got to talk to some new people and I spent the evening pleasantly. What I was missing was some kind of thorough integration as many people tended to sit with their groups of friends. There is nothing bad in such behaviour but I think that an icebreaker would be a good idea to start that evening. 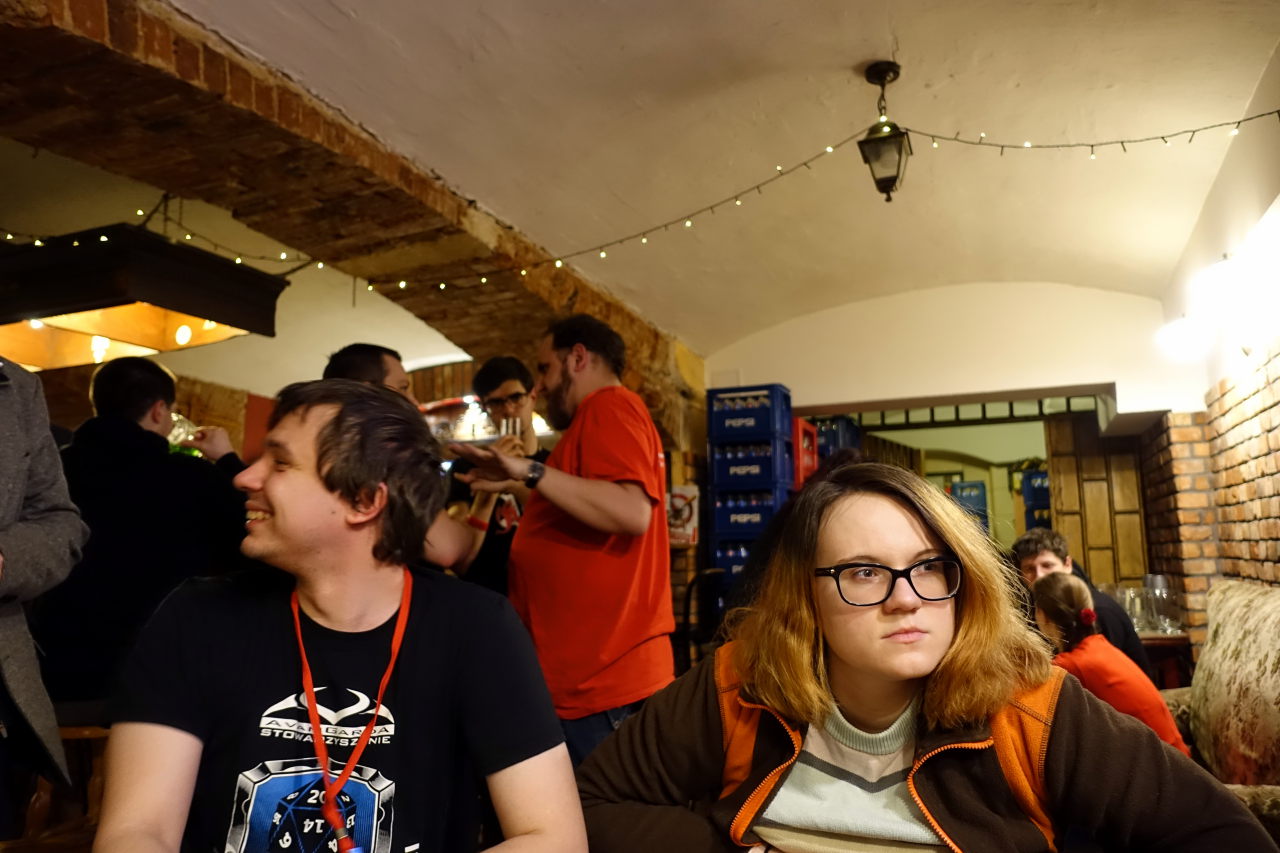 I got a chance to present If I ran the Zoo Con to Polish fans. Unfortunately people were not really interested in it. There were only four players (plus myself) to run the game. I really enjoyed it and I think players did as well. In fact one of them asked me later in the pub where the game can be bought. I hope that the next time the interest will be bigger as the game is really worth playing and, in my opinion, it also helps to develop some useful skills.

What have I brought back?

I obtained several important things. First of all, some new contacts and knowledge. Those are the things that are maybe difficult to measure but very valuable. I had also some more knowledge on the paper since I got a copy of the second KONgres publication – KONteksty (CONtexts). I am very happy as I was one of the editors and it is really difficult for me to express how happy I am that we managed to prepare it. 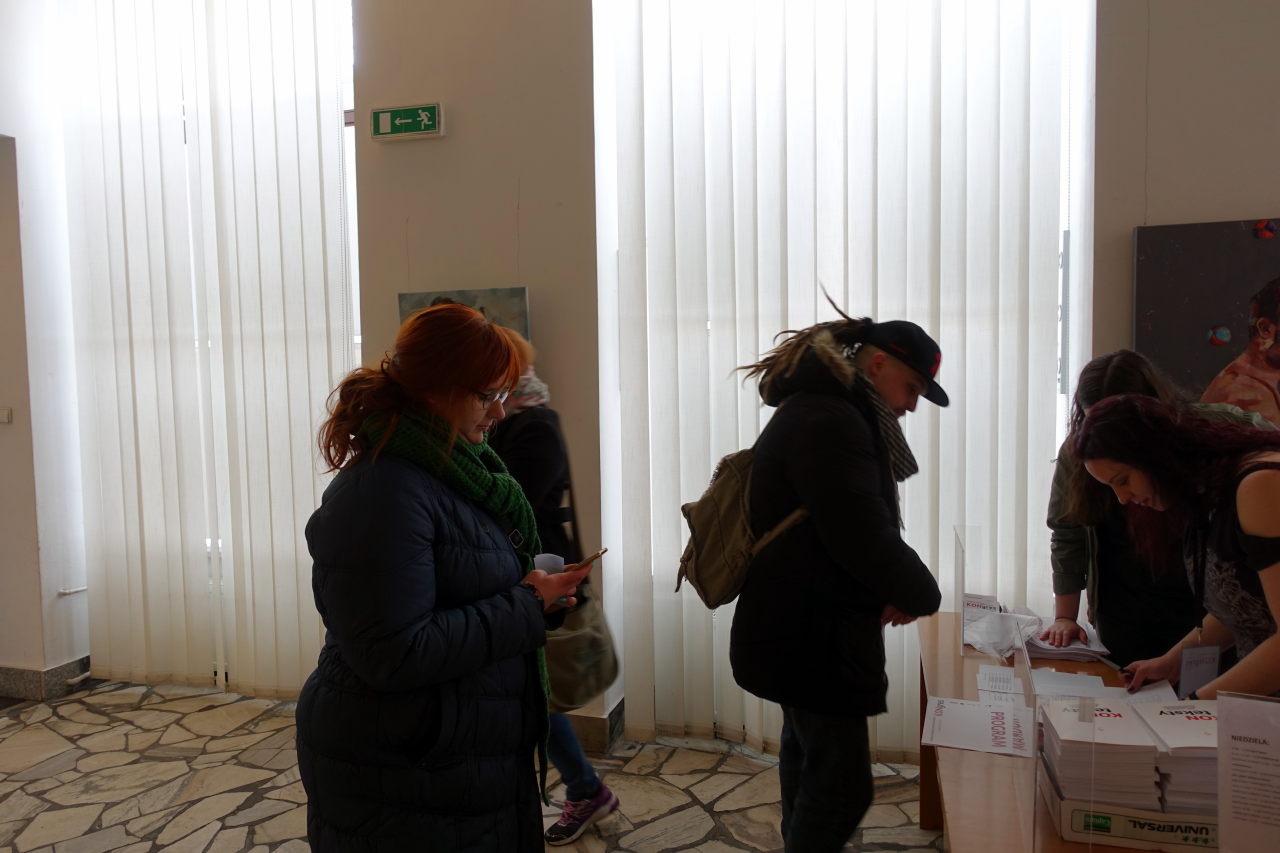 Pile of KONteksty at the registration desk

Last but not least I brought home a nice piece of paper. It stated that Krakowska Sieć Fantastyki (SF club from Kraków that I am chairing) received the right to organize KONgres 2019. Just after the announcement of the winning bid (we had one competitor) we started to discuss the topic. It seems I will be chairing the con and several members of the concom have already let me know what they would like to do. We have our heads full of ideas and I hope we will manage to make great KONgres next year. Of course we need also to prepare the next publication for conrunners. 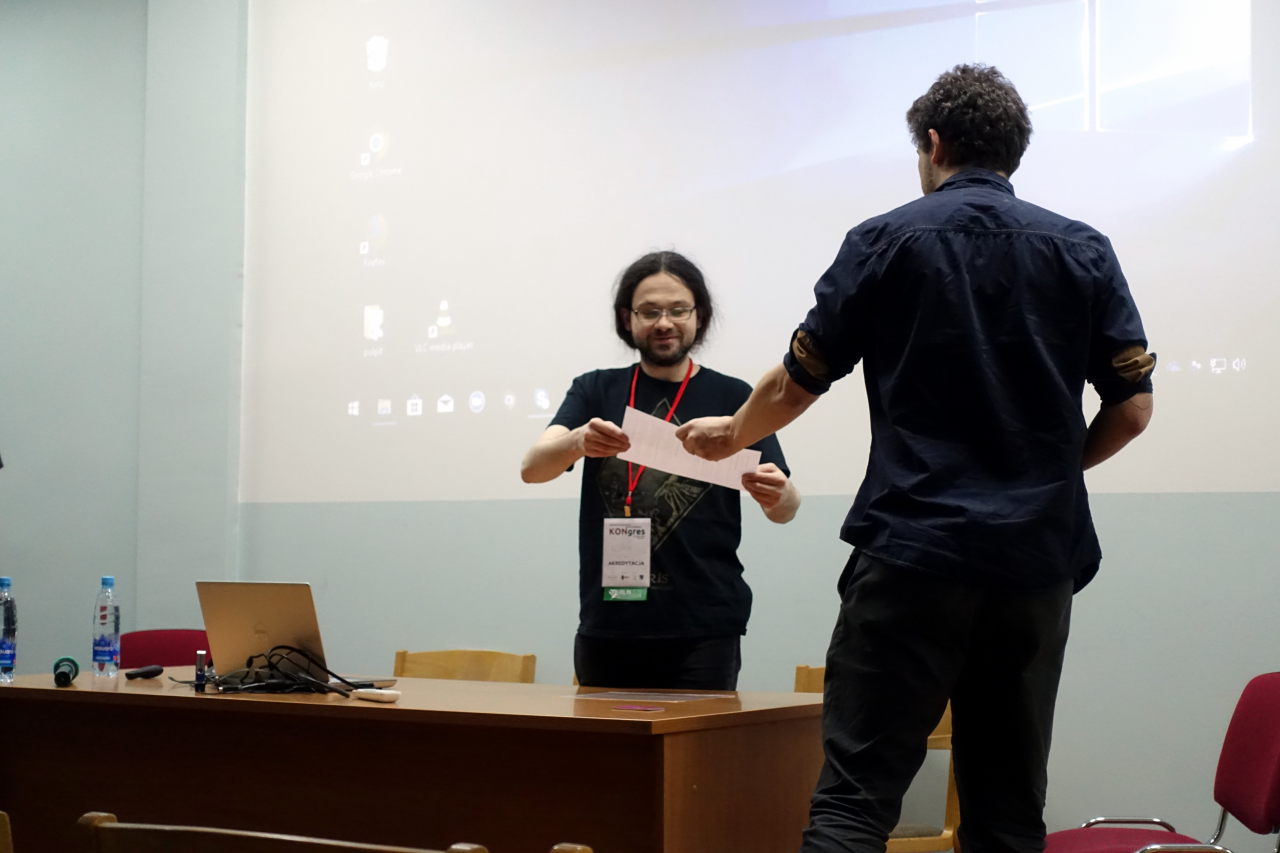 I am receiving decision regarding KONgres 2019

So I enjoyed the con. It gave me some energy (although I was coming back really tired) and it inspired me for the next year. I hope that people will enjoy KONgres in Kraków. And here I need to stop but for sure I will write something about our plans in the upcoming months.

My next post will be about Śląskie Dni Fantastyki convention and will be published on April 18th.