I wanted to visit Eastercon since several years but as it is held during Easter (which I am spending with my family) such trip wasn’t possible for me. Yet this year I decided to run for GUFF and thus I excused my family and headed for Eastercon to participate in Fan Fund related items.

The venue in which Follycon was held was truly majestic. Not only because the hotel was called The Majestic Hotel but mainly because how it looks like. The hotel was opened over 100 years ago and although it suffered from fire at least two times in its history, it looks great. Maybe not everything is perfect (especially from the accessibility point of view) but visually I think it was the nicest convention venue I have ever been to. 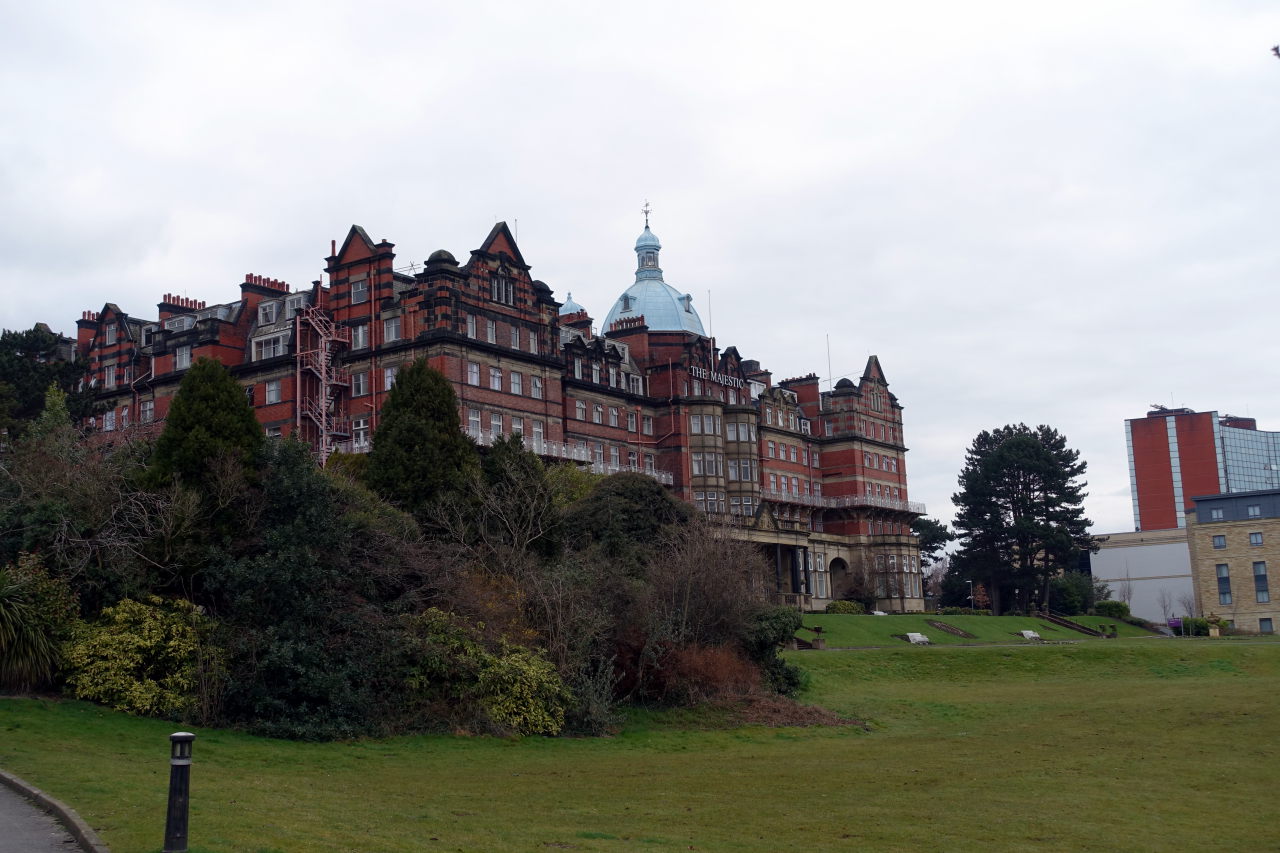 Convention venue as visibble from its garden.

Not all of the decorations inside were visible during the con – e.g. beautiful fireplace screen was hidden behind the scene in one of the programme rooms. Still the atmosphere of the building was really nice (and I hope you can see this on some pictures).

I really love Souvenir Books that are given on some conventions. I know it is not a very environment friendly tradition but I do love collecting them. Most of the cons I have attended did not publish such books but fortunately, Follycon did. It was a simple paperback booklet but inside there was some interesting reading.

Apart from the Souvenir Book we all received also, a comparable in size, Lake’s Folly – a collection of writing by Christina Lake, the Fan Guest of Honour. It will take me some time to read through it but some of the articles I’ve read so far were really interesting. 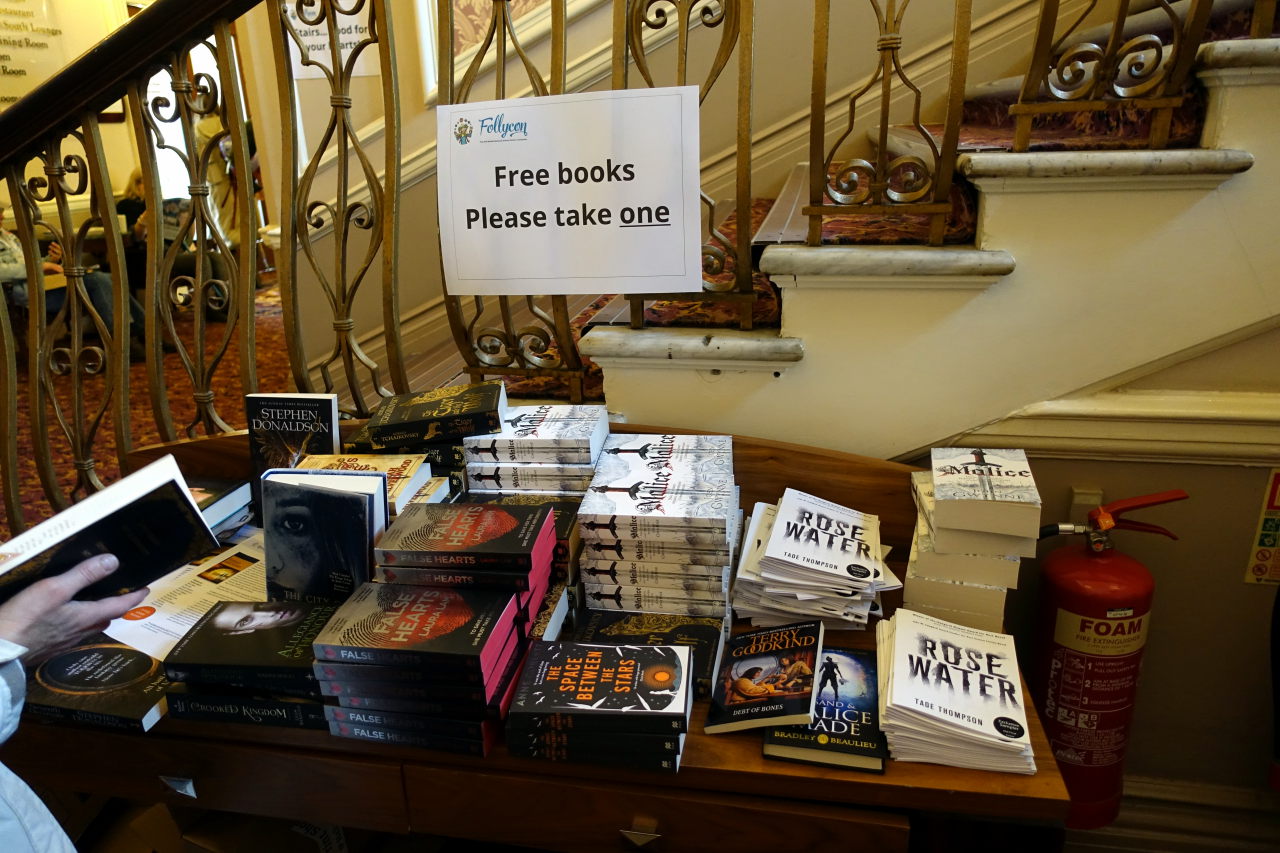 Lastly I have seen an amazing thing. At least amazing for me. Dublin 2019 table was offering Warhoon 28 fanzine. If you haven’t heard about it (I didn’t until that moment), it is a collection of fan writing by Walter Willis. It was published in 1978 and printed on mimeograph. The quality is so good I was sure it was a recent printing using a font looking like typewriting.

Being busy all the time

I like to be busy at the con so usually I am offering my help. This time I received quite a few tasks what was kinda fun (although I haven’t participated in some of the programme items I planned). I was in two programme items – one as a GUFF candidate and one as a RPG player. I was also gophering. Two people asked me for help in this area – Lesley (general gophering) and John (Games room). Last but not least I was helping a bit (just two hours) at the Dublin 2019 table. 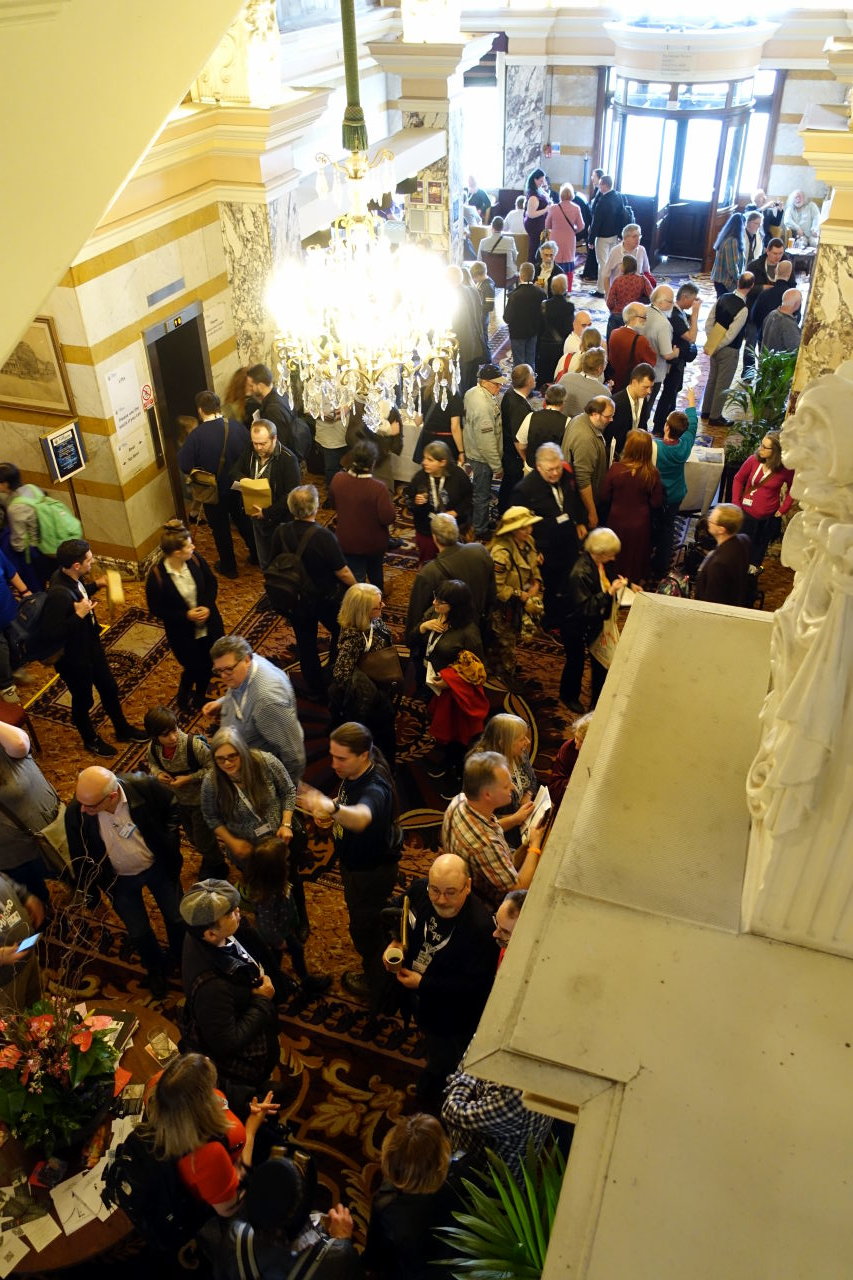 Hall near one of the hotel entrances.

In fact I have the feeling that most of the time I was either doing something, preparing to do something or resting after doing something. This is of course not the truth – I spent a lot of time talking with people and I visited a few programme items (maybe less than I planned but still more than nothing). I quite enjoyed this buzz all the time. As I had to work I spent a lot of time meeting people and chatting. 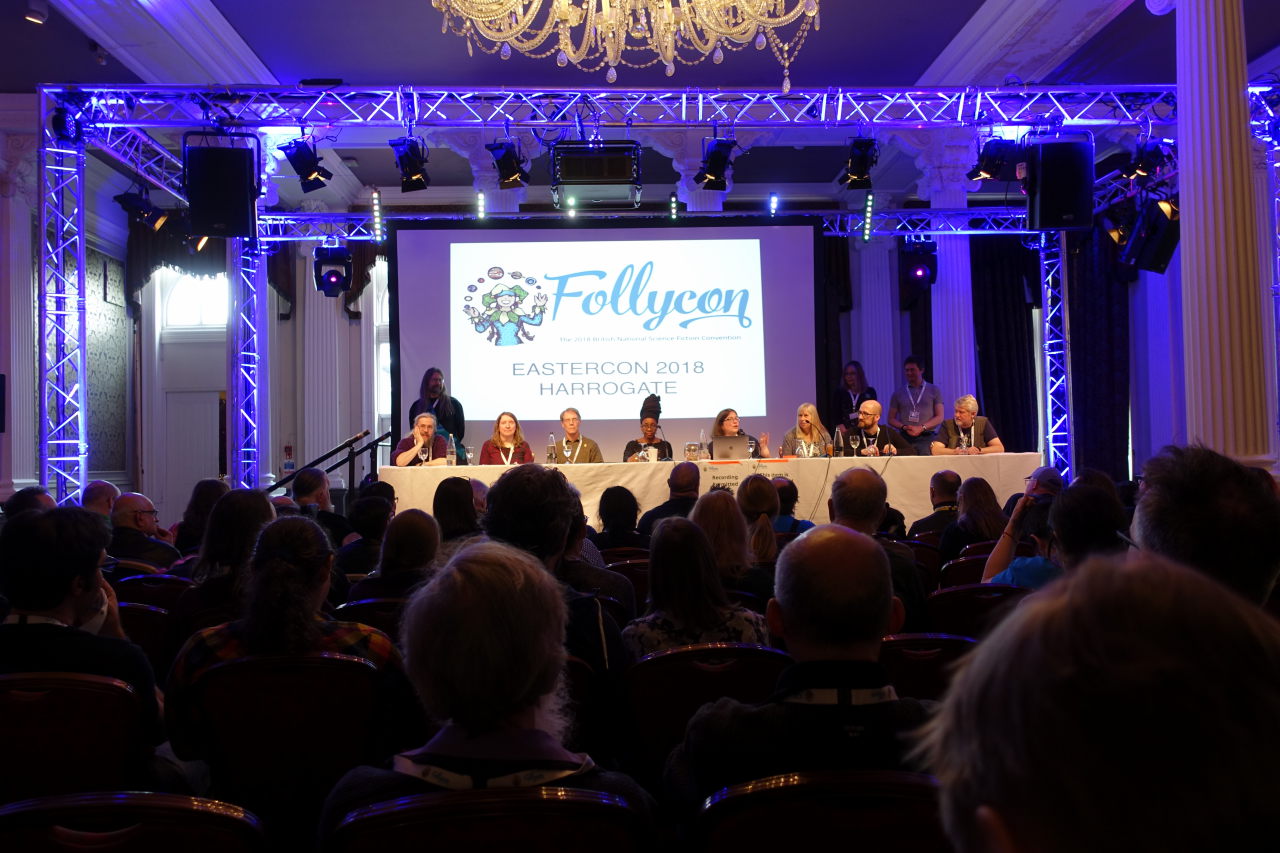 I really enjoyed manning the Dublin table as I was joined by Ben Yalow who revealed some of the fandom histories to me (including the story behind Warhoon 28). It was really an interesting conversation I am grateful for.

Out of the programme items I have visited some were very important to me. Firstly, the interview with Nnedi Okorafor. She was really a great speaker and the interviewer did a good job (both in terms of preparation and leading the interview). This is the item I will remember for sure.

I really enjoyed Remembering Le Guin panel discussion. Being a great fan of her writing I wanted to listen to others speaking about her and her works. Some of the panelists had more personal remarks and some slightly more academic. Still it was a nice panel and the one very close to my heart. 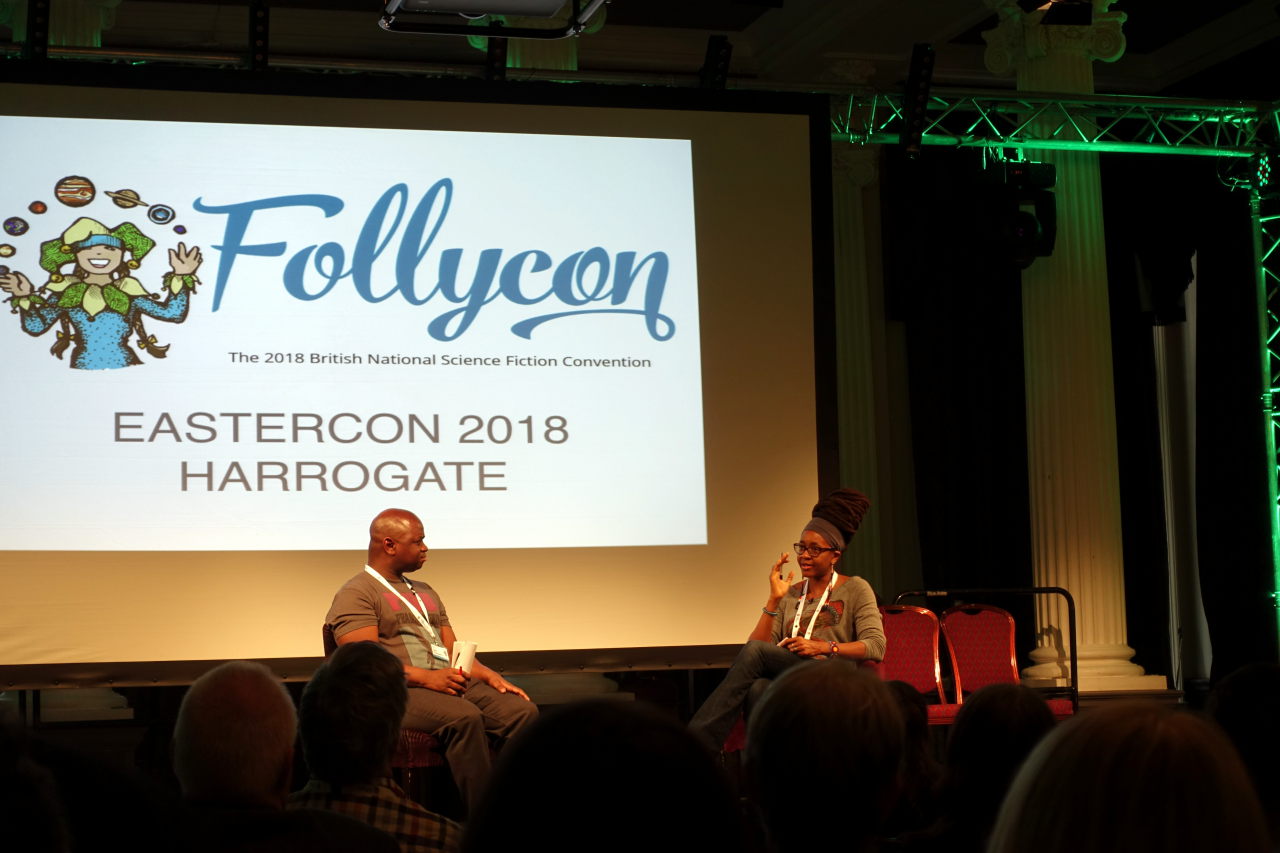 Interview with Nnedi Okarafor – one of the Guests of Honour.

I really wanted to participate in the filk circle. On the first night I couldn’t as I had to leave early. On the second I had plans to attend but I spent whole evening chatting with group of fellow fans (and such a great evening it was!). Lastly, on the third night, I managed to go to the filk circle. It was the first time in my life when during filk circle I decided to sing solo and not only help in chorus. I did two songs by Leslie Fish – Hymn to the NightMare and Sun is also a warrior. In the second one I lost the melody and had to stop… What is important is that filk circle accepts that you may make such mistake. I really treasure this openness of filkers that helped me to sing with people around. 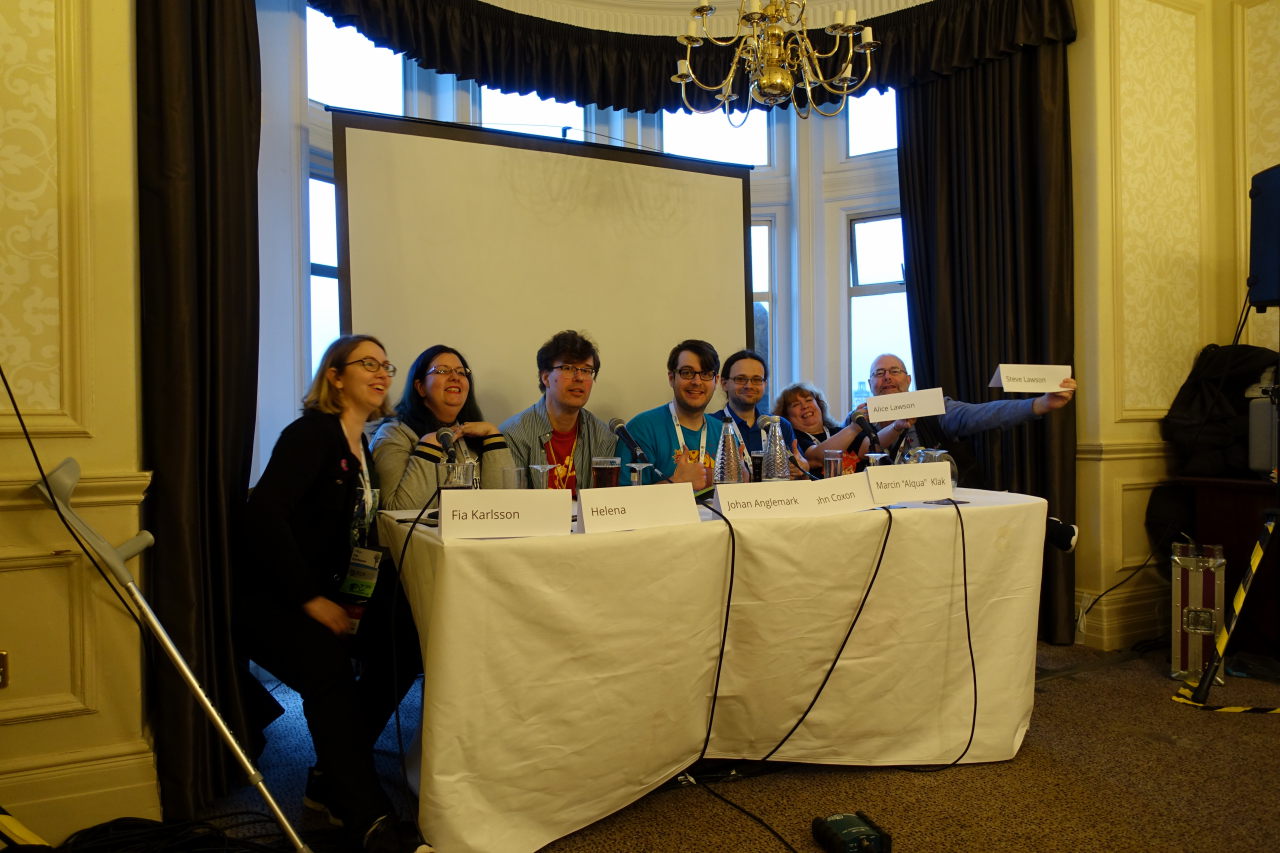 You can always do something for the first time

I love art shows. On each convention where one is organized I am looking at the pieces of art and I enjoy them. It was not different this time. I have seen numerous great works. Especially the painting of Bilbo Baggins was terrific (and unfortunately way too expensive for me to afford). Still there was something I wanted to buy and I did it. It was a small enamel pin – one of the limited edition made for Follycon concom. I have fallen in love with the design since I saw it and well, somehow it happened that I won the auction (and it was the first time I was bidding in art show ever). 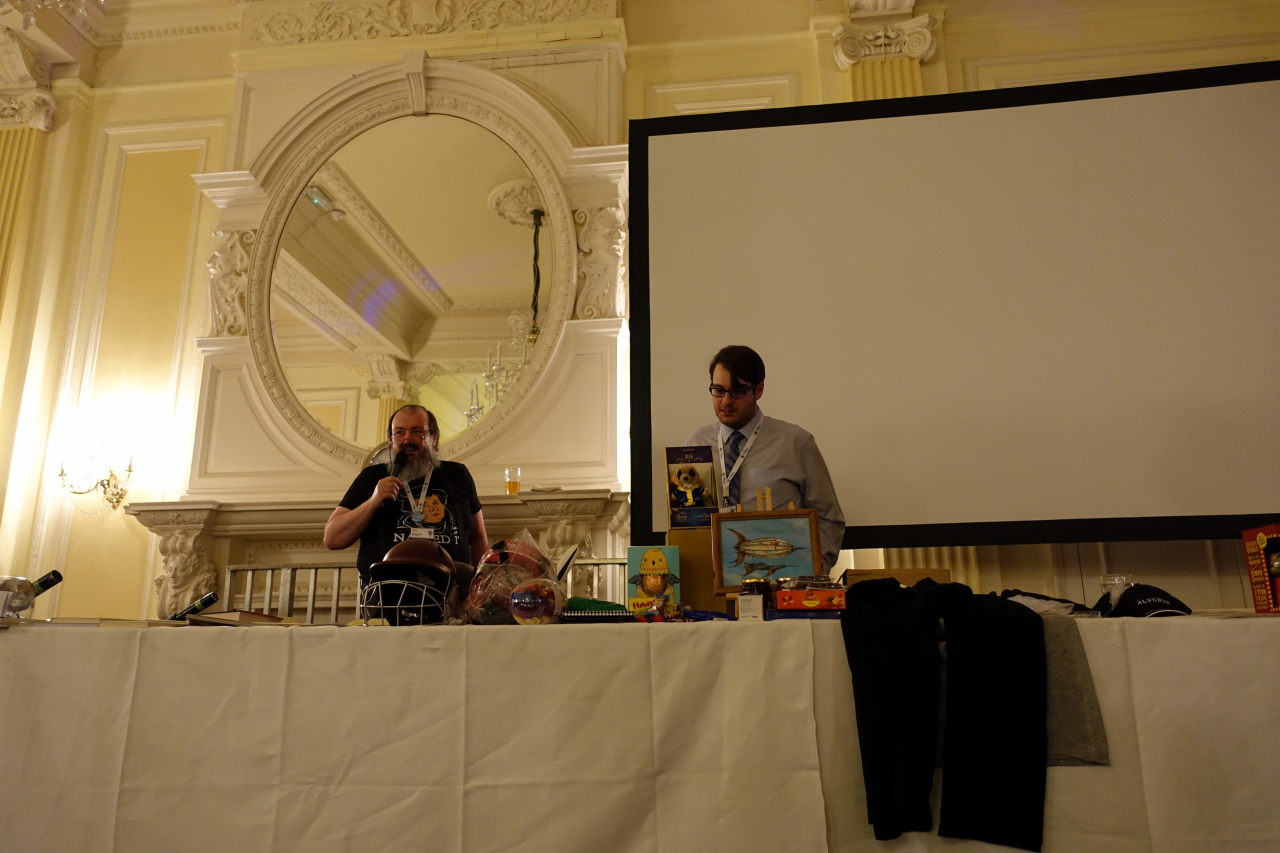 Also at Follycon it was the first time I was bidding in the Fan Fund auction and I was able to buy the beautiful painting of zeppelin. In general Fan Fund auctions are fun. People are quite willing to buy stuff and the auctioneers also knew how to made it all fun. The auction lasted for 1.5 hour but it was nice enough that I would have absolutely nothing against spending one more hour there 🙂

I didn’t know British fandom too well and I was a little bit lost in the beginning. There were some people who really helped me and to whom I would like to direct my deepest thanks. Once I became more self-confident, I spent a lot of time talking to fans and discussing different matters. From language differences, through learning Polish pronunciation and discussing art, to talking about the programme items we have been to. I don’t know whether I’ll manage to visit Ytterbium next year but if so, I know there will be more people whom I know even if just a little bit 🙂

My next post will be about Lituanicon and will be published on 16th May.