SMOFCon 38 was supposed to take place this year in Montreal but it was rescheduled because of the pandemic. Yet it was decided to hold a smaller online event on the first Saturday of December. It was named SMOFCon 37 ¼. I managed to not only attend it but also help a little bit.

Postponing a travelling convention is not as easy as one may think. Different groups are preparing ahead, starting several years before the event takes place at their location, so it requires a lot of discussions. Although the location of 2021 SMOFCon was not selected, there was only one uncontested bid (Lisboa, Portugal). Everyone expected that this city will receive the right to organize SMOFCon 39. The team was not able to move it to 2022 so all in all a very interesting thing happened. SMOFCon 39 is going to be held in December 2021 in Lisboa and SMOFCon 38 will take place in Montreal in December 2022.

This would not be possible without discussions that Montreal team undertook with all the involved parties. The team contacted their selected hotel, the Lisboa team and the bidding teams for 2022 and 2023. You can find the announcement with some details here. 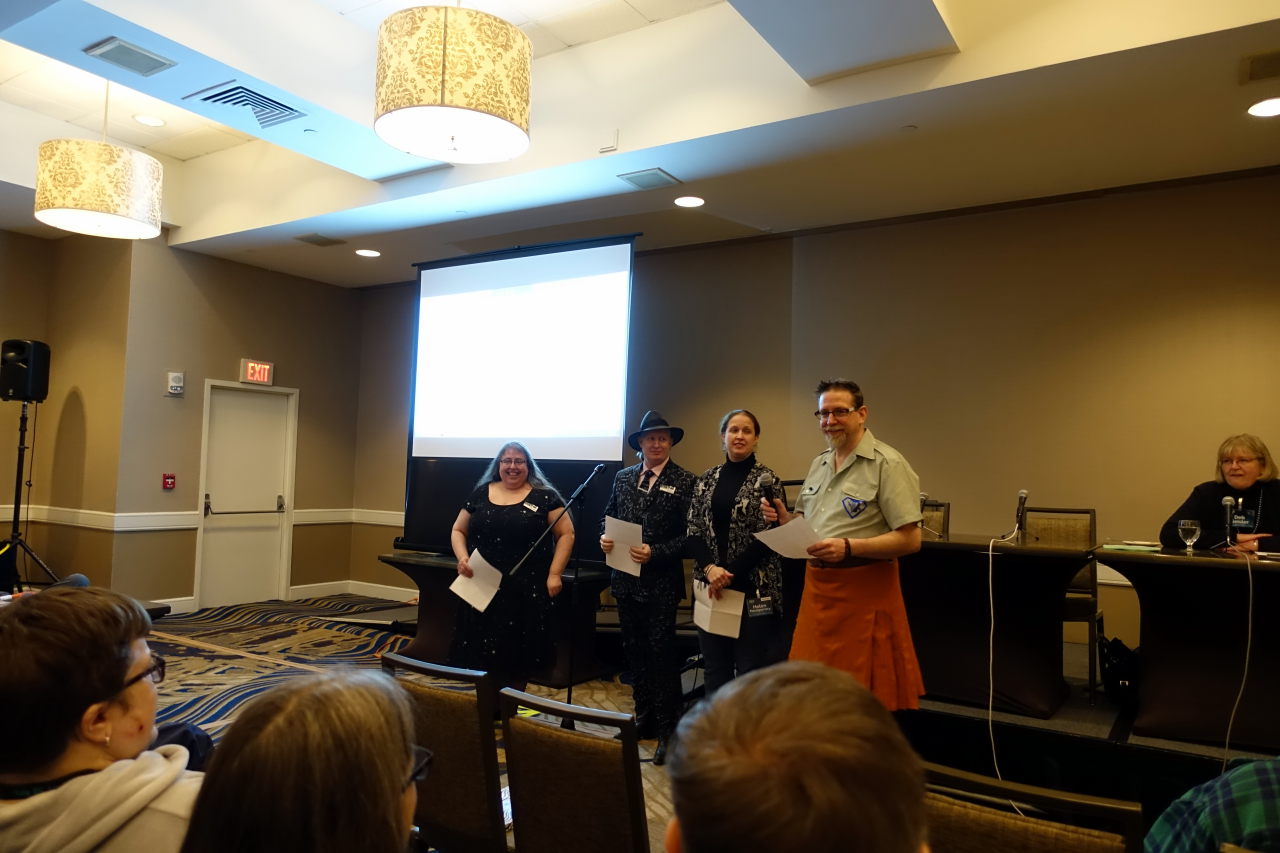 I am using the picture I took at SMOFCon 35 as I made just one picture this year.

The first SMOFCon I attended in 2017 had a full programme that I enjoyed. The 37 ¼ edition was a completely different animal. There was only one programme room and a consuite. It also lasted only for one day. The programming focused mainly on items that are at the core of SMOFCons. Out of five programme items, three were in fact a ’Fannish Inquisition’. First one for Worldcon bids, then seated Worldcons and lastly for both seated and bidding SMOFCons. It was interesting to listen to the presentations and questions.

I learned about a few bids for Worldcon. I was aware only about the Jeddah in Saudi Arabia bid for 2026. At SMOFCon, I heard about two US bids (Orlando and Los Angeles) and Nice in France. The latest is interesting as they were initially bidding for 2023. Also the first bid was announced for 2027. Gadi Evron presented the proposal to hold Worldcon in Tel Aviv, Israel. It seems that in recent years more and more countries want to host Worldcon and it is a good sign. 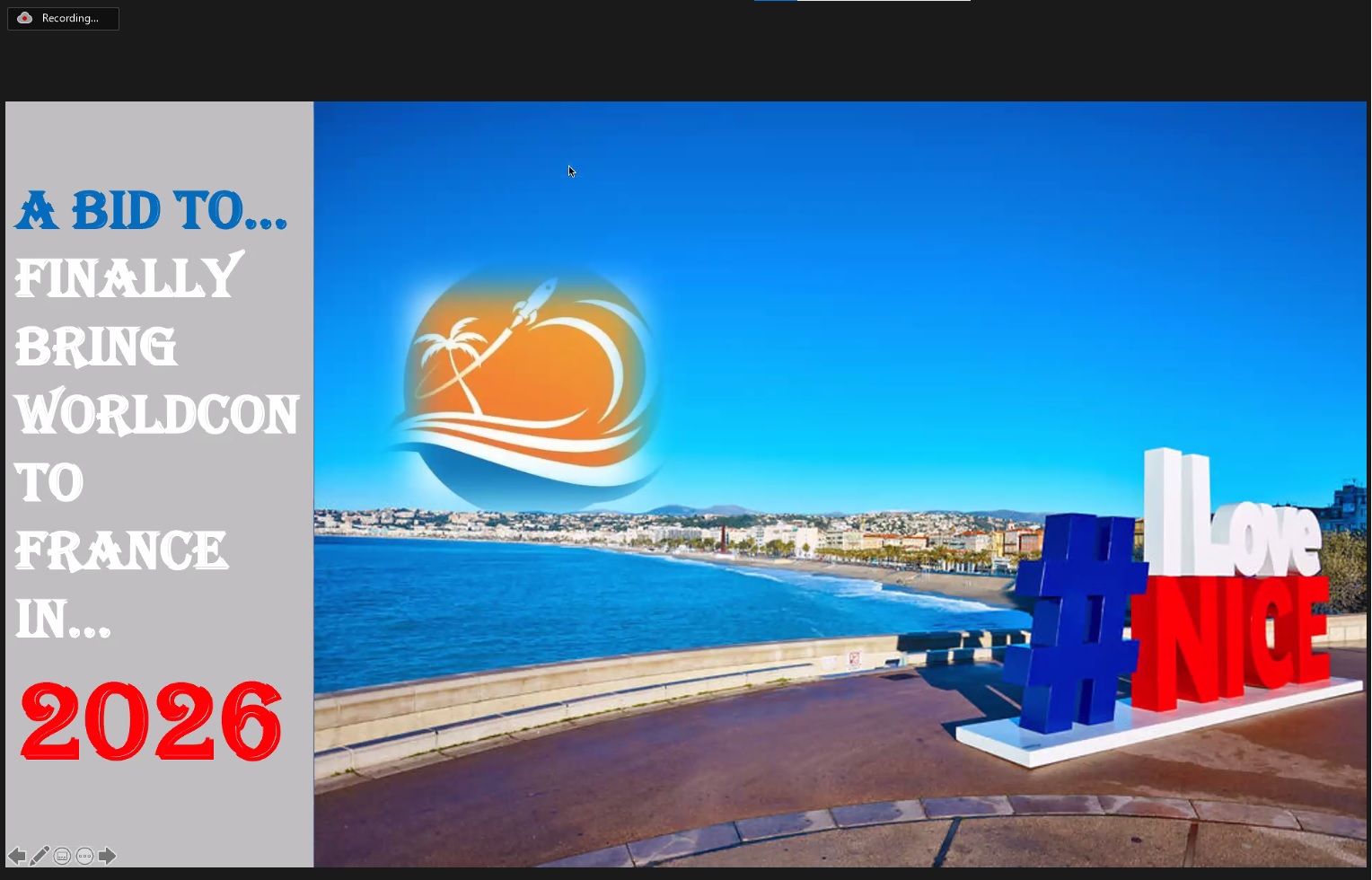 The only picture I took during the SMOFCon.

Apart from the items mentioned above, there were two more I attended. They both concerned virtual cons (this should not be surprising this year). The first one was an interview with the chairs of CoNZealand (this year’s Worldcon). Norman and Kelly who coordinated this con answered some questions and shared their experiences. I am grateful to them for this interview. The last item was called Pivoting to a virtual convention and best practices. I was hoping for it to be more educational but it was still ok.

The virtual consuite worked pretty well. I did not spend too much time there though. Still I managed to have some nice conversations with other fans, both whom I’ve known from before and the ones who I just met. I regret I didn’t manage to spend more time there but I was occupied with the main programme (and I had to go to sleep later on). One thing I am especially unhappy about missing out on are the planned discussion groups. There were a few of them scheduled over the day. I wanted to listen to two of them – Sponsorships Discussion and Virtual Art Show discussion.

All in all, I am happy that SMOFCon 37 ¼ took place and that I managed to attend it. It was also good to see that I was not the only Pole at the con. According to the Roundup published on File770, out of 21 countries, Poland was on the sixth position in the number of participants.

The number of attendees was a bit surprising to me. Most of the programme items had over 100 members. The two that were less popular had 89 and 91 members in the audience – quite impressive.

And this was the last convention for me in 2020. I’m planning topost a summary of the year in the beginning of 2021.