When I learned that Philcon would go online I knew that I had to try attending it. The history of the con is really long and I was curious how the convention would look like. When the day came I took some days off work so that I would be able to rest before and after the con due to time zone differences.

Somehow I was oblivious to the fact that “Philcon” sounds quite like “Filkon”. I realized it when I mentioned to someone that I would attend it and I heard ’-’I am not into filk’-’. I was sure that it was only a coincidence. In fact, I still think so, yet the filk programme at the con was quite extensive and enjoyable. 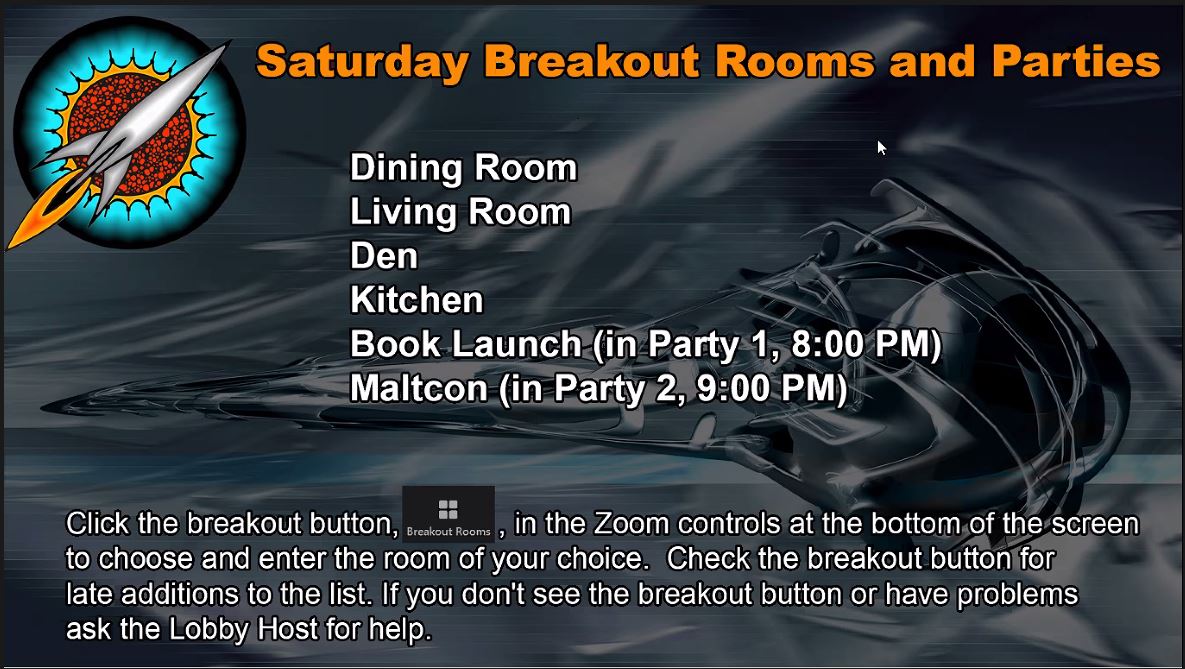 In general Philcon had nicely prepared the information panels in Zoom.

Because of the time difference, I was not able to attend the whole Philcon. I had to limit myself only to the morning and afternoon items. On Friday those were almost exclusively filk-related hours. I managed to listen to two concerts and attend a few filk circles. On Saturday and Sunday I managed to attend more items that were not music-related. Still, it would be a lie to say that I didn’t visit any filk items on those days.

If I would have to choose the best filk item at Philcon, it would be a concert by Rhiannon’s Lark. The first time I heard her playing was when I was watching recordings from the Festival of the Living Rooms. Since the beginning I was astonished by Rhiannon’s Lark’s work. When I saw that the concert was scheduled I knew I must attend it. I am definitely not disappointed. She played some songs I already knew and some that were new to me. It was delightful. I learned about the Kickstarter campaign to fund her new album.

I would be unfair to other filkers if I would mention only Rhiannon’s Lark. Apart from her concert, I enjoyed the one given by Roberta Rogow. I also had a great time at filk circles where I listened to others. I am not going to list them all here, because I don’t want to omit anyone. Yet I still want to thank everyone who sang and played. 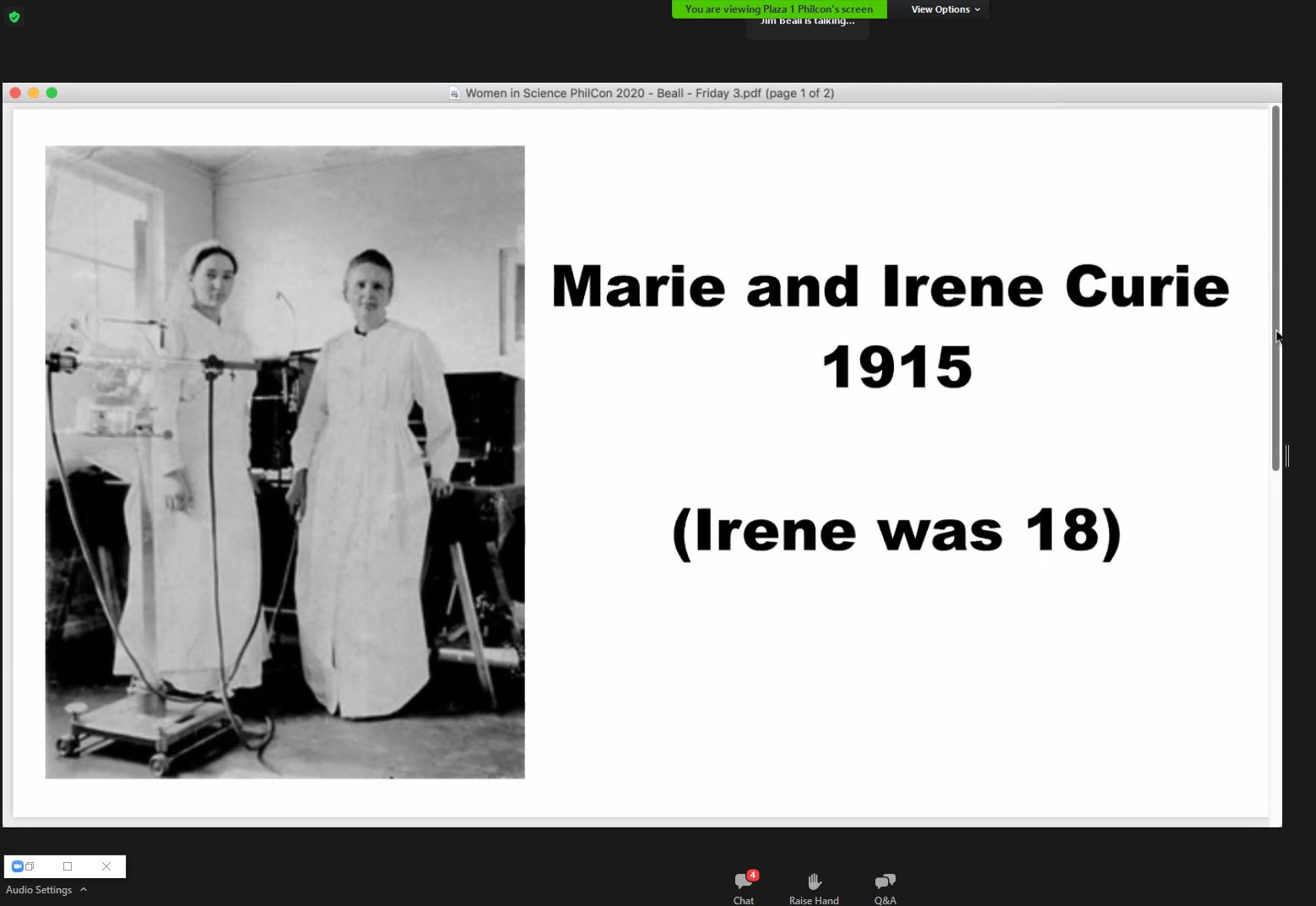 Screen taken during the panel on Women in Science.

When I was not filking I managed to attend some panels and talks. I gladly listened to the Women in Science panel. It was nice to see that Marie Curie was mentioned a lot. I regret that her maiden name was omitted but maybe it is only in Poland where it is always used. The lecture Artificial Intelligence: Past, Present, Futures was also quite interesting.

The history and what was missing

Philcon’s history dates back to 1936 when a few New York fans visited fans in Philadelphia. This meeting is called the first ever SF convention (although it is disputable). Whether one believes that the event in October 1936 was the first convention or only a meeting of fans it doesn’t change the fact that it is the beginning of the Philcon’s history. This (at least to my knowledge) means that Philcon is the con with the longest history in the world. I must admit that this was quite exciting to me. I was curious how this would be reflected during the con. 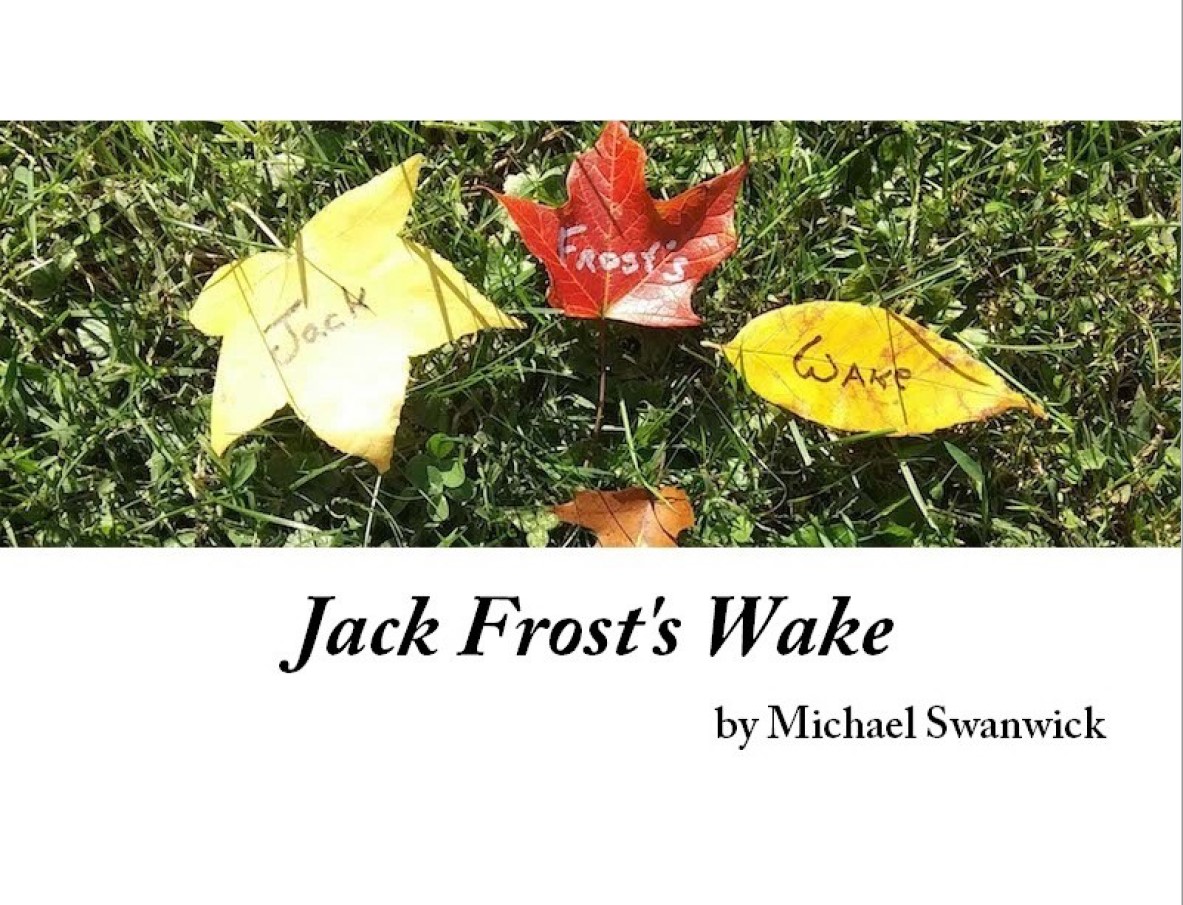 The cover of Jack Frost’s Wake.

Sadly, there were very few fandom-related programme items. It was somehow disappointing. Don’t understand me wrong. I don’t mean that a convention must include such items to be enjoyable. Being a con with history also doesn’t mean that this is a “must-have” part. As there was a possibility to reach the fans who usually don’t attend Philcon I was sure there would be some local fan history items. I must point out that the fannish topics were to a certain extent explored in the Programme Book.

Everyone who attended Philcon received the possibility to download two things. The first one was the Programme Book and the second – a book by Michael Swanwick – Jack Frost’s Wake. I did not yet finish reading them but I still want to mention a few things. The book by Michael Swanwick has an intriguing form. Each page consists of a single photograph of autumn leaves with the words on them. The story is quite simple but the whole project is amazing. 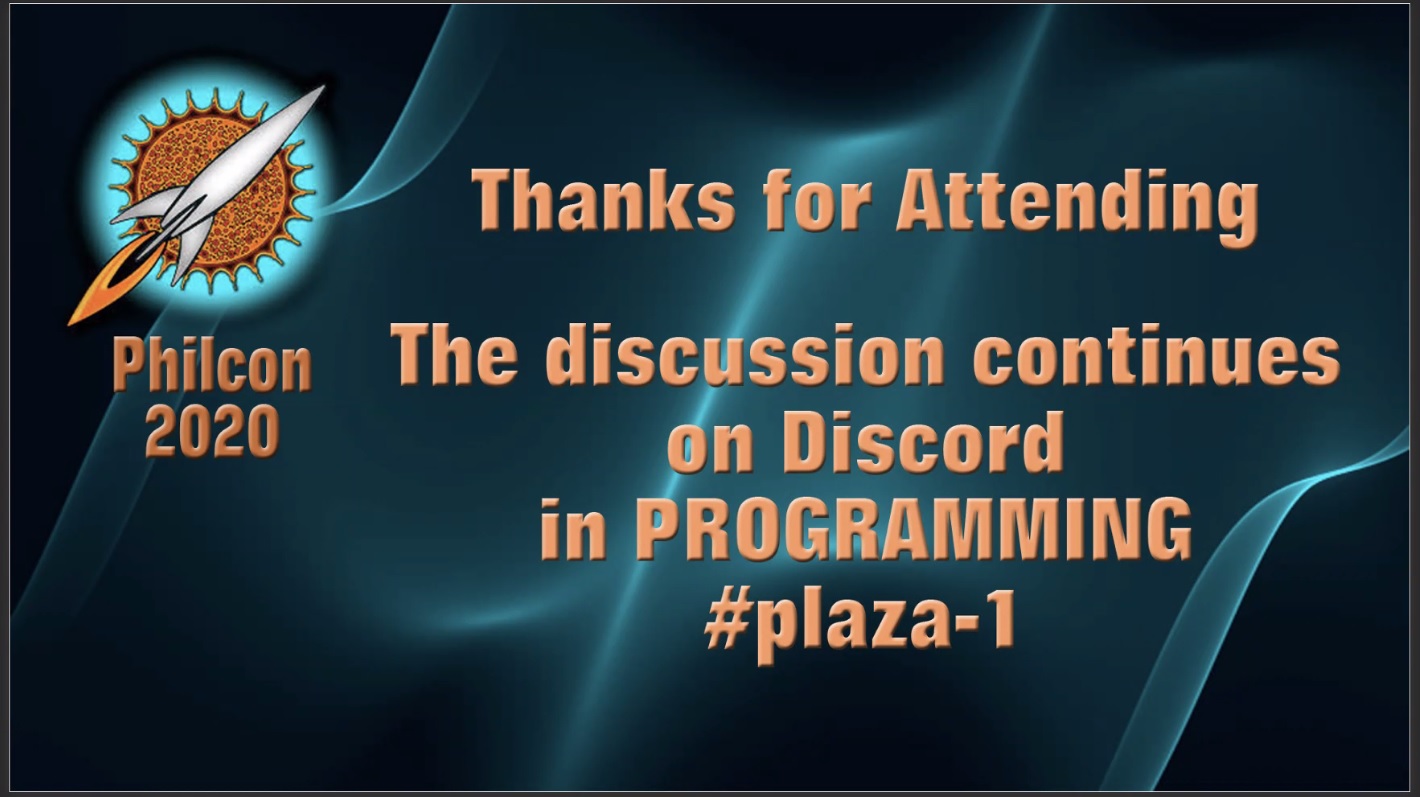 Another example of information on Zoom.

When it comes to the Programme book, apart from the things one usually expects in such publication, it contains quite extensive extras. This section was called Special Feature – Non-Fiction, Fiction & Art from Philadelphia Region Talent & Philcon Regulars. As mentioned above, I will need to read through it all but it is a valuable souvenir from the con. When it comes to souvenirs, I regret that there was no badge. Still, the programme book is definitely worth to have.

The year’s end is coming

Not so long ago I expected that Philcon would be my last con this year. Now I know that I attended Smofcon 37 ¼ so Philcon wasn’t my season’s closing event. Still, it is almost the end of 2020. I do hope that next year we will all be able to return to more standard approach to conventing. We know it won’t happen in the first few months of 2021 but hopefully it will change later on.

My next post will treat about Smofcon 37 1/4 and will be posted before this year ends.