DisCon III may not be the first hybrid convention yet for sure it was the first hybrid Worldcon. This means it came with its own set of challenges. The situation was very unique (as it was the case for CoNZealand) and some of the solutions were not tested before. So how did it go?

Chairing conventions is a hard work, chairing a Worldcon must be harder. Still the situation with DisCon III was even more complicated. The convention was quite unlucky. For quite some time the hotel where DisCon was held was in an unclear status due to bankruptcy. It made any discussions with the facilities way more difficult. During 2021 both co-chairs of the con decided to resign from their function. In July a new person became a new chair of DisCon III – Mary Robinette Kowal. As far as I know she was not previously involved with the con so it was a challenge.

I cannot imagine how much work Mary Robinette Kowal had to perform to take over a convention of this scale just a few months in advance. Yet she decided to do that and I am thankful for that. She also received a very nice thanks from her concom. During the closing ceremony at the last afternoon of DisCon III they gave a moving speech. 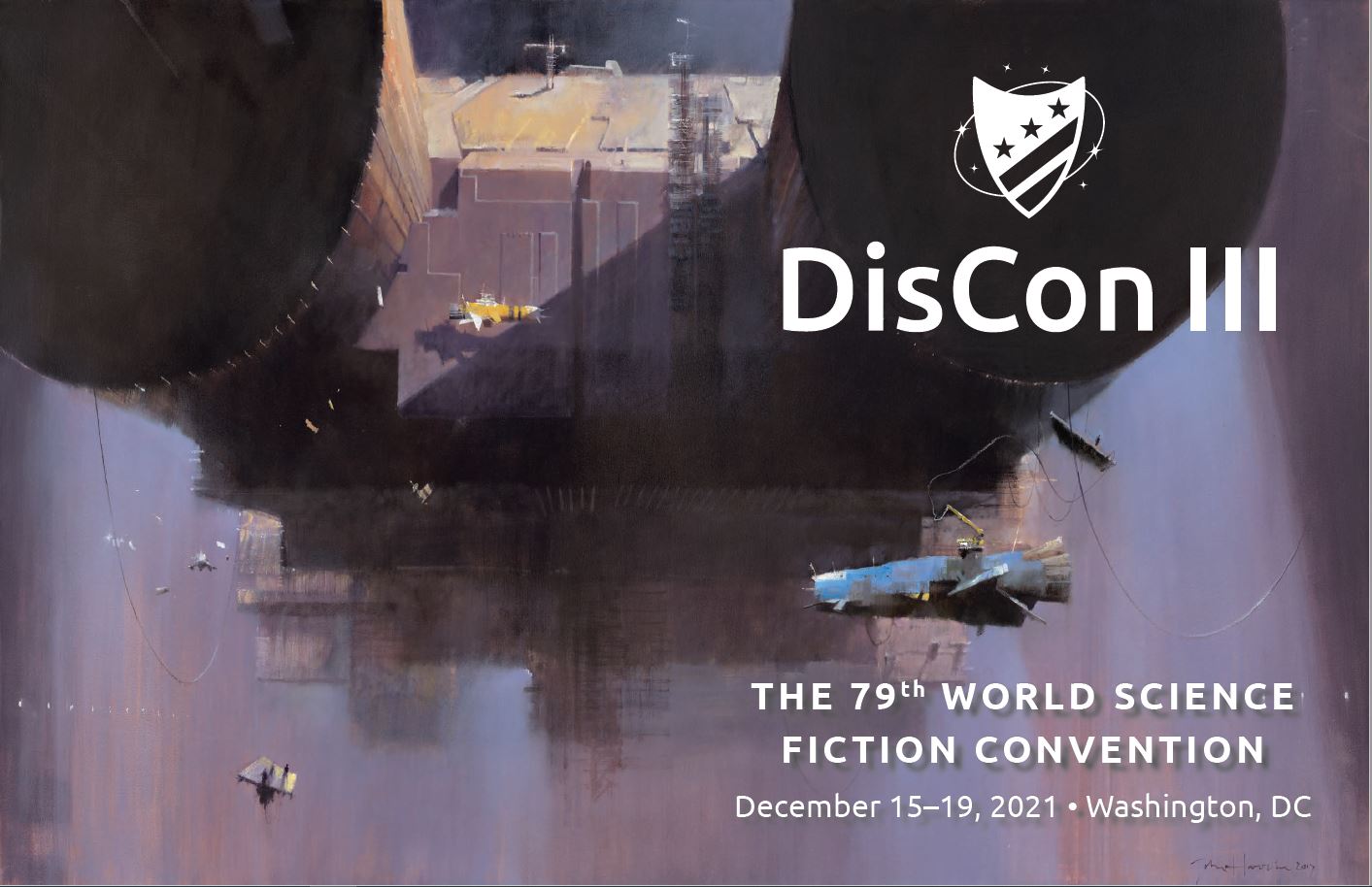 I am waiting for the physical copy but I aready got a PDF of Souvenir book.

On top of all those difficult circumstances it was, as stated above, the first hybrid Worldcon. What can I say – the mistakes were made. Some of them were big issues – others – smaller. I am sure a lot of us – conrunners, learned from those experiences. Although I am unhappy about some of the things that happen I don’t want to complain too much. Of course I will point out some of them but I want to concentrate more on positive aspects of the con – and there were many!

One day I was told that the best way to experience Worldcon is to volunteer. This is why I did it at every Worldcon I attended so far. At DisCon III I helped only remotely (as I was not attending in person). I didn’t do a lot – just some hours spent as party host and some more as an Ops rover checking virtual programme items. The work was not hard (although it meant I did not attend some programme items I wanted to see). I regret that virtual volunteers did not have the chance to get convention t-shirt. I understand why such a decision was made yet I simply regret I won’t have my special t-shirt from 2021. On the bright side one of my bosses decided he would mail the volunteers convention badges. I am so grateful about that!

As a volunteer I had a chance to see a bit behind the scenes. And what I can say that there was a lot of effort put in place to make this con a success. I am impressed how smooth certain things went considering how little time some members of the concom had to work on them. I am full of respect towards the people who took care of preparing the virtual aspect of DisCon III.

At this point I want to thank all the volunteers who helped with Glasgow in 2024 bid promotions. We had two tables – virtual and physical one. We also had some parties both in Washington DC and online. Lastly there were some other promotional activities on-site. I am thankful to all of you who made all this possible.

The convention programme was very good. I found so many items I wanted to attend, and I checked only those that were available online. I haven’t listened even to half of what I wanted. At most times there were a few items I found interesting. Fandom, literature, science, music… There were all of those. I want to watch the recordings of some of those that I missed. I cannot wait for them to become available. 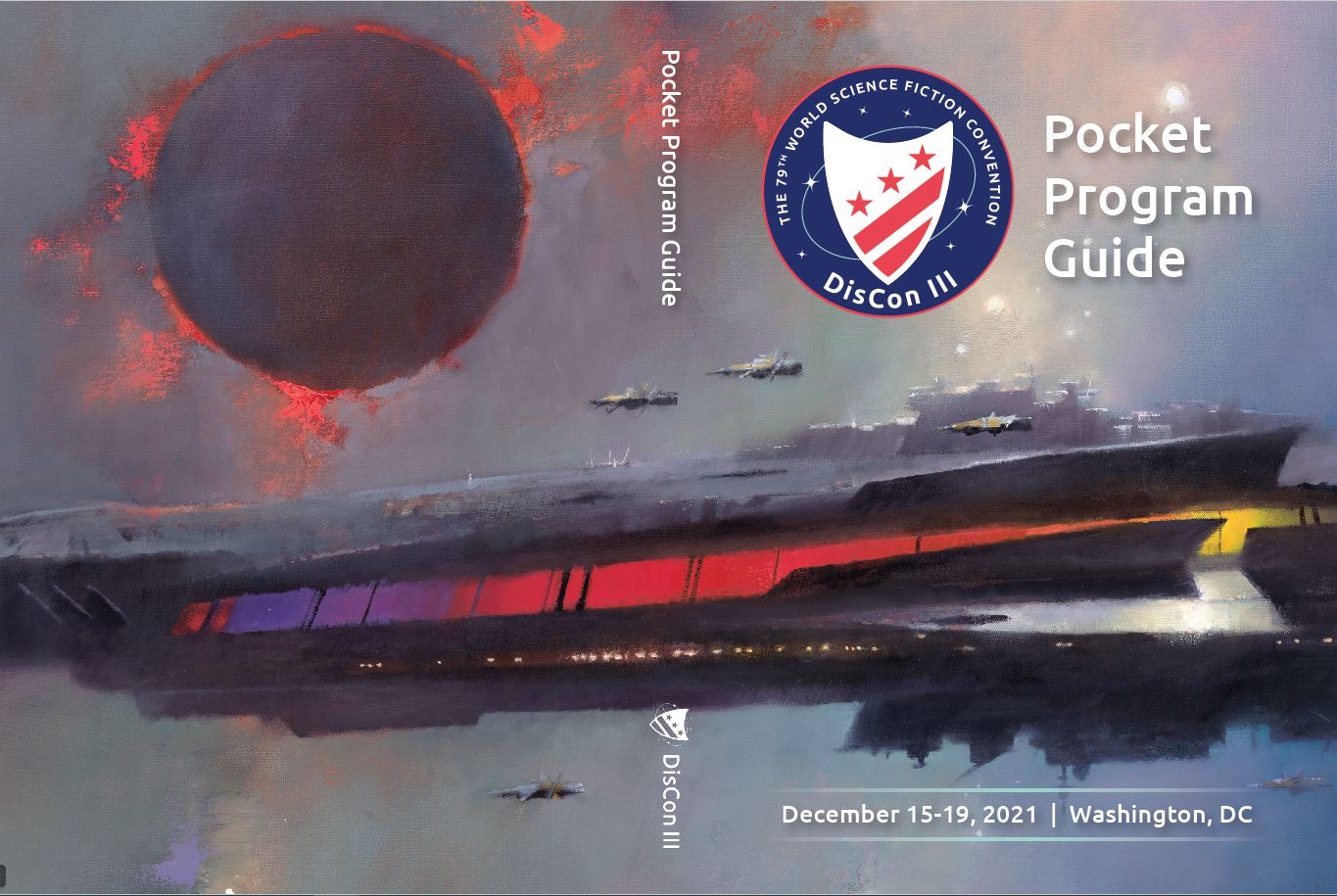 There were two types of items from my perspective. Those that took place online and those that were on-site but were streamed to the internet. The first group went quite smooth. The second was more complicated. During most of the items the sound was rather bad. I had to concentrate to be able to understand what was being said. I am not sure what caused this yet for sure this is a learning point for the future hybrid conventions.

DisCon III did a good job at bringing more World into Worldcon. There were a few levels where this was observable. First of all I want to mention the mini-stream related to the genre in Africa. At the con I managed to listen only to two items: Being African Is Tougher Than You Think and Gender and African SF. Still there are some more I hope to check on recordings.

Another very important part of bringing more World to Worldcon was financial accessibility. Virtual membership was a waaaay cheaper option to join Worldcon than attending a physical con. Of course the financial barrier still existed but it was smaller. I saw some people mentioning that this was a good opportunity. I am sure that some virtual presence for Worldcons will become more usual.

There were also other programme items that allowed to show SF from non anglophone countries. I was glad to see panellists from non English speaking countries on these panels.

There were two main options for remote participants to socialize – Discord and Zoom. Both quite well known from virtual conventions. I was expecting Zoom to be busier. There were occasions when only the staff was present there. Maybe it was related to the hours when I visited it? Still the time I spent there was awesome. Of course there were some other occasions when more of us was on Zoom. Those were as good as the calmer periods.

The header from convention newsletter.

As for Discord it was a bit too big for me. I mean – this is what I would expect from a server at a big convention. It was not the first con where I was not able to follow all the conversations. I limited myself to the Glasgow in 2024 channel and to one more place – “counting” channel. It was a brilliant idea that started long before DisCon. The idea was very simple – to have a channel where we can count. Yes you are right – it was just to count from one to… many. The first dozen or so were simply digits – later on there were pictures with a number visible on them. Right now – ofer a week after the con I pasted the picture of Commodore 1570 floppy drive. As silly as this concept may sound it worked pretty well. And it works still – even after the con finished.

Time I spent at the con

I am happy that I attended DisCon III. I am sure I would be even happier should I be there in person. When I try comparing my experiences at DisCon III and CoNZealand I see some things that worked better for me last year. I loved the exhibitions that allowed me to feel a bit more in New Zealand. I missed something comparable this year. On the other hand I felt so good being able to see the people together in Washington DC. Even though sound on the panels streamed from the hotel was bad it was so good to see people.

Speaking about seeing the con. One morning Spike was kind enough to offer some of us a virtual tour of the conplace. I am not sure how long did it last but seeing the hotel was almost like being there (well not so close but you get the point).

So all in all I had the good time. I can see some areas where improvement for the future is possible. Still considering everything I believe that DisCon III went quite good. It was not perfect, but I enjoyed my time.

My next post will be published early next year.