That was a weekend! I hope people had good time. As for me I was too busy to properly enjoy the con. I liked it! Yet as I spent most of it doing things it is hard for me to say how it looked for members.

Bringing Polcon back to Kraków

The last time Polcon was in Kraków was in 2002. I was thinking about bringing it here for many years. Still we didn’t have the team to make it happen. Organizing Polcon was in a way difficult. This lead to certain problems. Yet the fandom was discussing ways to fix those issues and one of the ideas was to change the constitution a bit. We agreed that making Polcon (stand alone convention) and “convention in the rank of Polcon” (attached to existing con) should be the same. This meant that the pressure on the organization making Polcon will be lower. And this allowed the team running Imladris to invite Polcon back to Kraków. 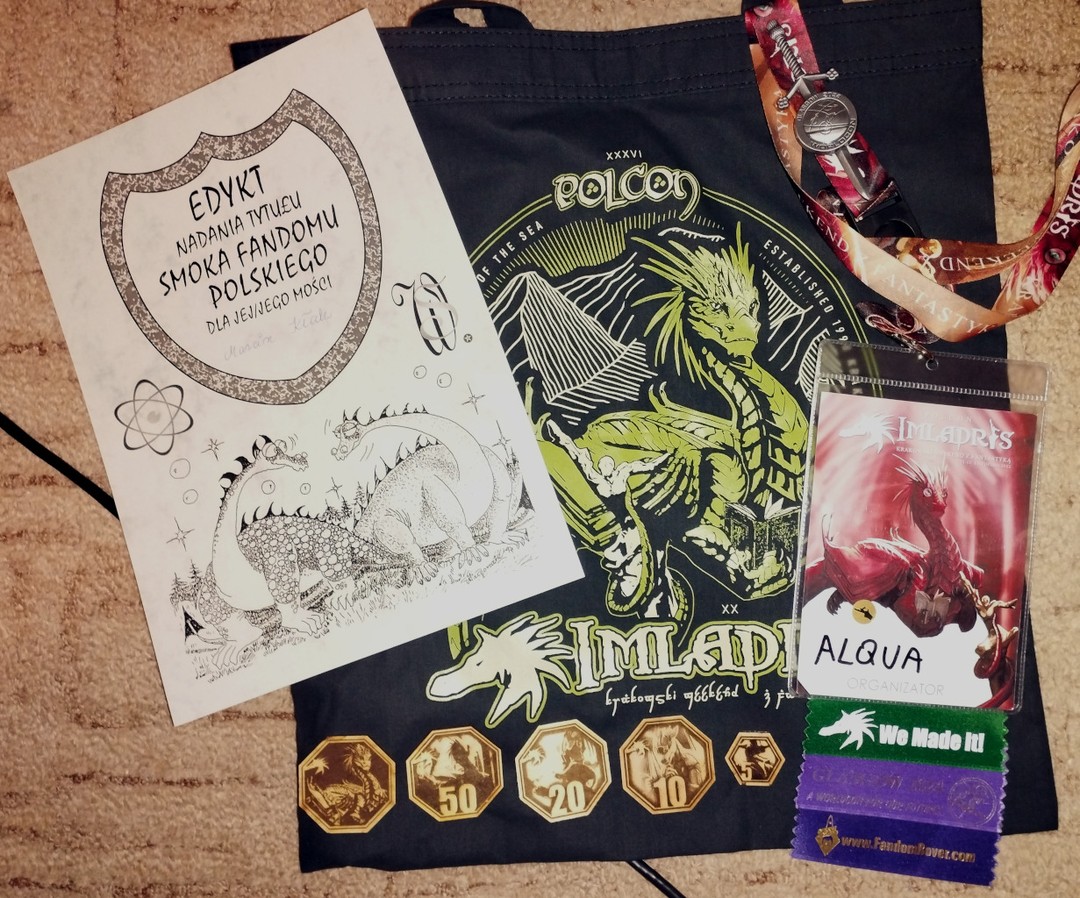 One may think this is my convention swag but this is just a small part of it!

Of course I couldn’t resist and had to engage myself in it. It was my dream for a long time. Initially I was supposed to be responsible only for certain matters related strictly to Polcon. Yet “because of reasons” I was also involved in the programming team. This was a great experience. Our initial leader (Seji) had to step down but Toothie who replaced him did a terrific job. It was great to work with her.

I was so happy when the programme came out. We had a nice mixture of interesting programme items. Probably I should not be complimenting the results of what my team did. Still in my opinion it was others who had the job done. It is not a false modesty. I had certain tasks which I did but the selection of programme items was not one of those tasks (at least not to a large degree). I planned to attend so many items! 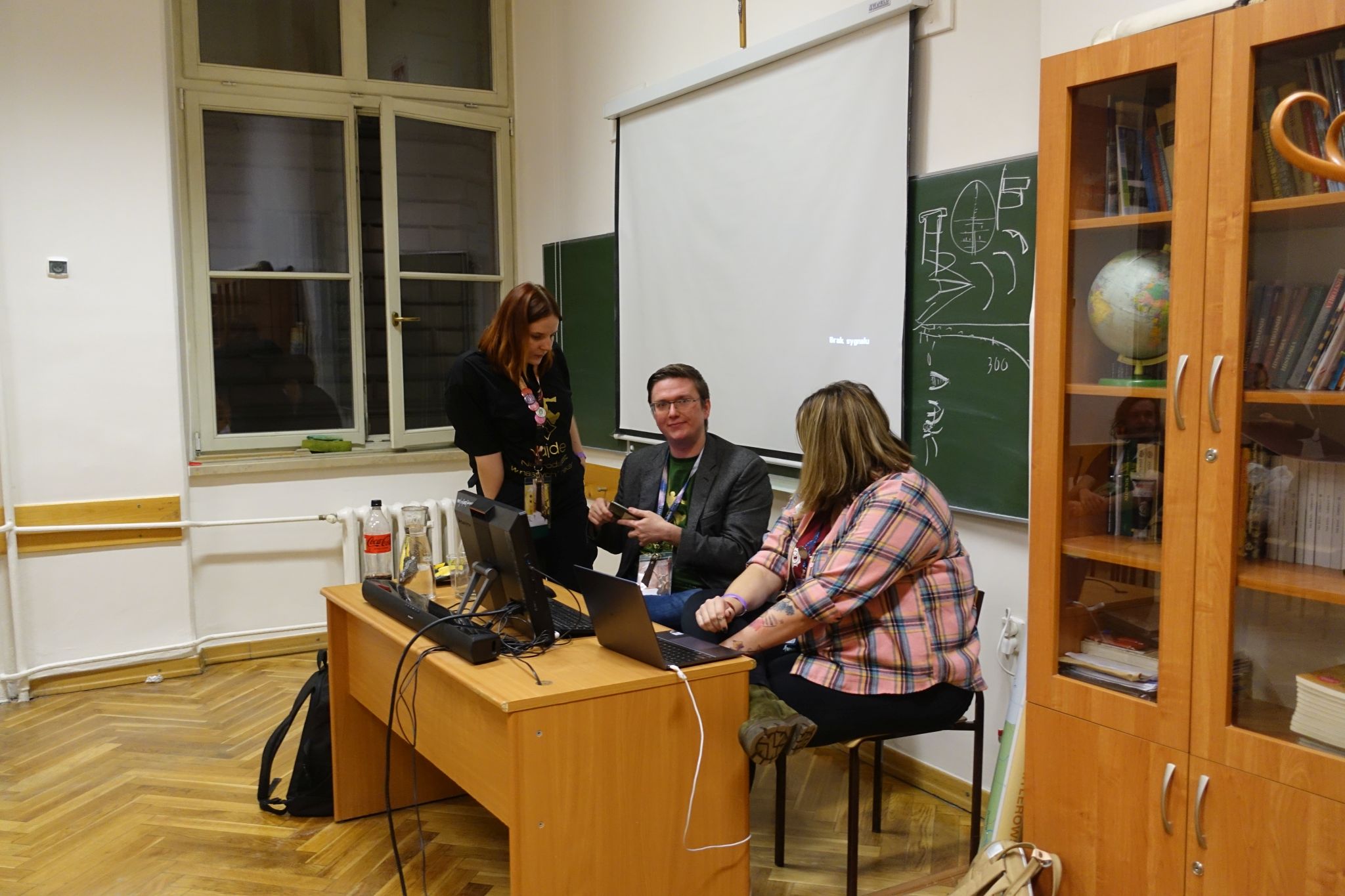 Before one of the programme items.

And my plans were ruined! Over the course of the pandemic years I completely forgot that there is no way to attend many items on the convention one runs. I had to do a lot of things, I had to rest, I was too stressed to enjoy the programme. All in all I was able to attend only a few items. I can only hope that members were able to visit more and that they enjoyed them.

I was very happy for our Guests of Honour and Special Guests. We invited Glasgow 2024 A Worldcon for Our Futures to be our guests. It was not done because I am involved in Glasgow, in fact it was neither my decision nor my initiative. It was cool to see Worldcon so nicely presented at Polcon! Esther, Fionna and James were present and from the parts I have seen it went pretty well! From the GoHs from Poland we had Agnieszka Hałas as a creator and Copernicus Corporation as a publisher. 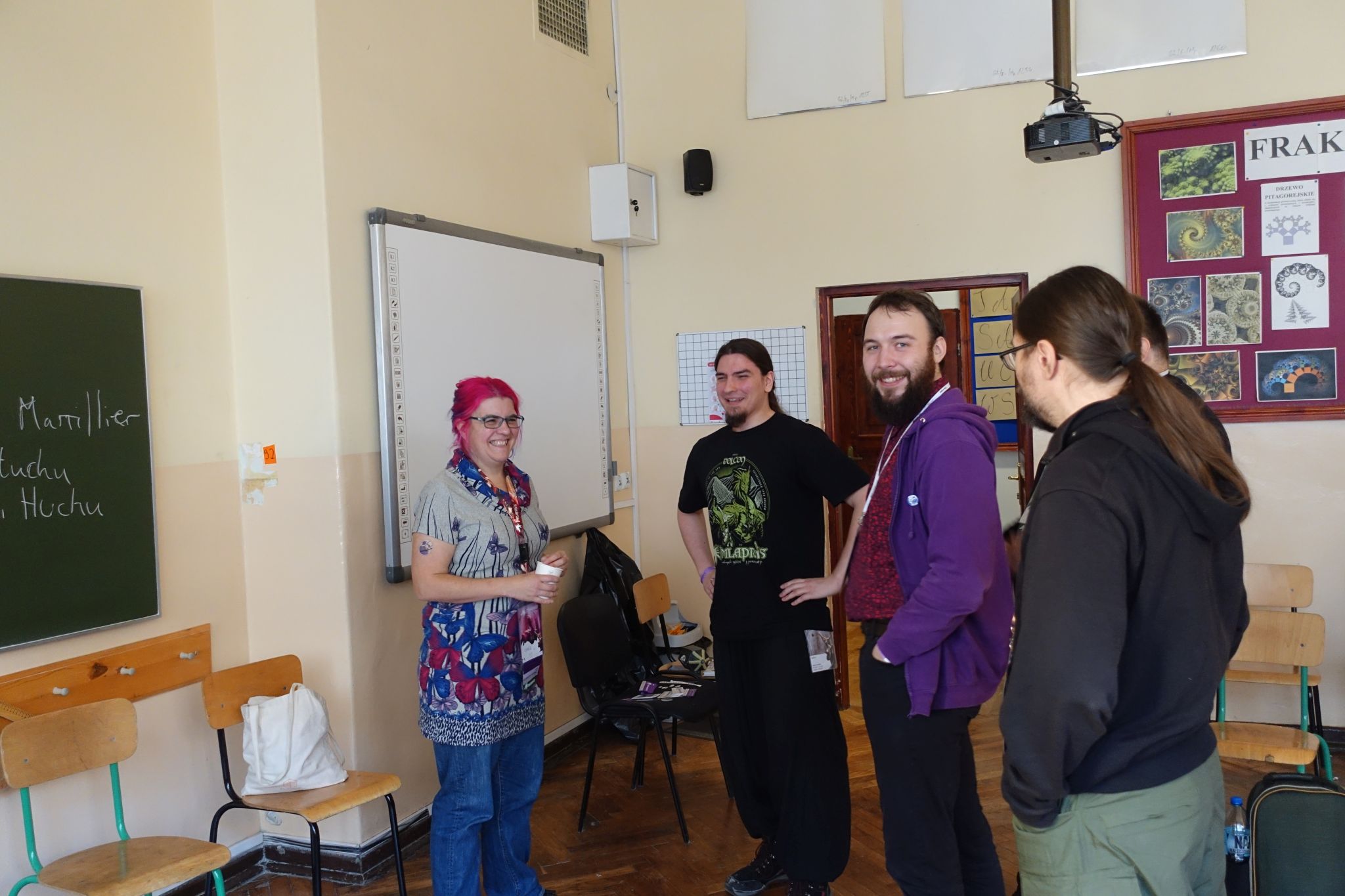 I was too busy during Imladris – Polcon. I didn’t have time too take proper pictures of all our GoHs. Here we have Esther mingling with Polish fans at the Glasgow 2024 party.

I believe that both Agnieszka Hałas and Copernicus Corporation deserved this recognition. They are both active for years and have never before received the GoH title at Polcon. It was a serious omission and I am more than happy that we managed to correct it.

As mentioned because of my duties I only managed to attend a few programme items. This included especially Council of Fandom and Fandom Forum. Those are two Business Meetings we have at each Polcon. They went quite smoothly although we had serious discussions on some of the ideas.

I was a moderator at one panel. It was called Worldcon as an experience and I still cannot comprehend how fast the time flew by. We had fifty minutes for a discussion and it felt like only a few minutes. I also was helping a bit at the Glasgow 2024 party (which took place during the day). Well my help was limited to handing away leaflets and then mingling with people a bit so I didn’t do a lot. On the last day I managed to attend A Brief History of Imladris Convention – a talk given by Seji. It was quite interesting as every programme item he makes.

I was accoladed as the Dragon of Fandom.

There was also one item where I was but stayed only for a short time – Smoki Fandomu (The Dragons of Fandom). At each Polcon people who are active in fandom for at least ten years can become Dragons of Fandoms. Initially it was limited to people who attended ten Polcons but it changed. I qualified some years ago but this year I finally got my diploma. I am happy that it happened in Kraków. The ceremony was pretty nice. I got accoladed with a sword. It may sound a bit silly but it was deeply moving. I would love to stay longer but it was clashing with Glasgow party on which I had to be. Apart from the Dragons of Fandoms some “Little Dragons of Fandom” titles were given too. They are awarded for at leats eight years of fannish activity. The Polish word for Little Dragon is “Smoczek” which also means “pacifier” so they received a candy pacifiers.

The Janusz A. Zajdel Award Ceremony

One of my tasks was to direct the Janusz A. Zajdel Award Ceremony. One of the suggestions we got is that it will be better to have a speech instead of the artistic programme. This was the case last year and people liked it. The artistic programme over the years received mixed opinions (depending on the year). As the room we had was a university hall it was also not the best for certain type of events. 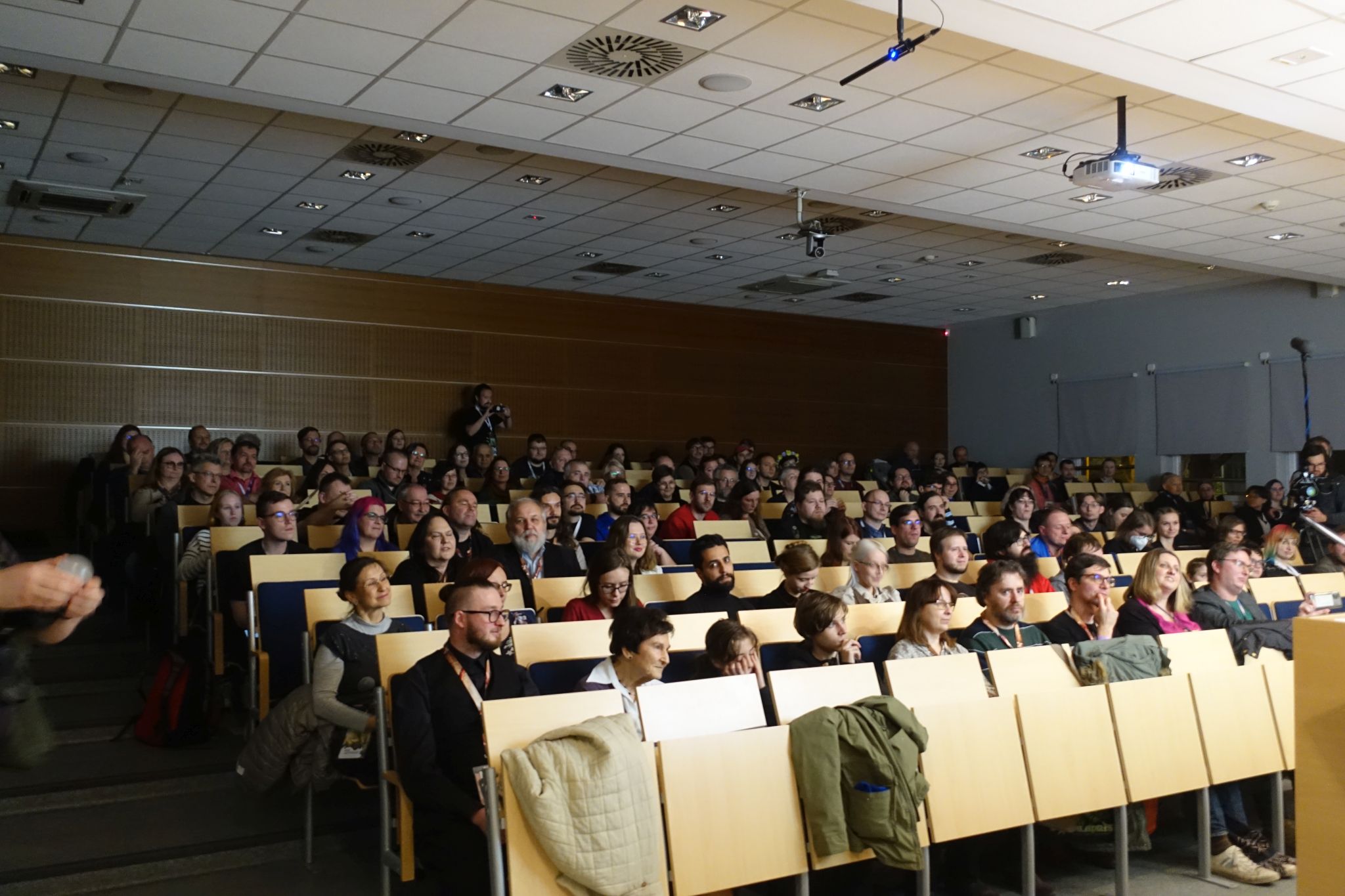 During the Zajdel Award ceremony I was on the stage so I have no pictures showing what happened. Instead I managed to sneak a picture of the audience.

You may imagine how “happy” I was when because of some unforeseen issues University changed our building. Instead of a short – 10 minutes walk from our main venue we got a space in a building 2.5 km away. We got the information just a few days before the con. This means we had to print announcements and organize “trips” to lead people to the new venue. I’m glad we didn’t have any artistic programme as the hall we were in had a desk fixed to the stage with no option to move it.

Still despite the venue issue the ceremony went pretty well. The person who we asked for speech firstly refused yet later he agreed. And so a writer from Kraków – Paweł Majka was giving it. I must say I was enchanted by his speech. It was deeply personal and I am more than happy that finally he decided to accept our proposal. 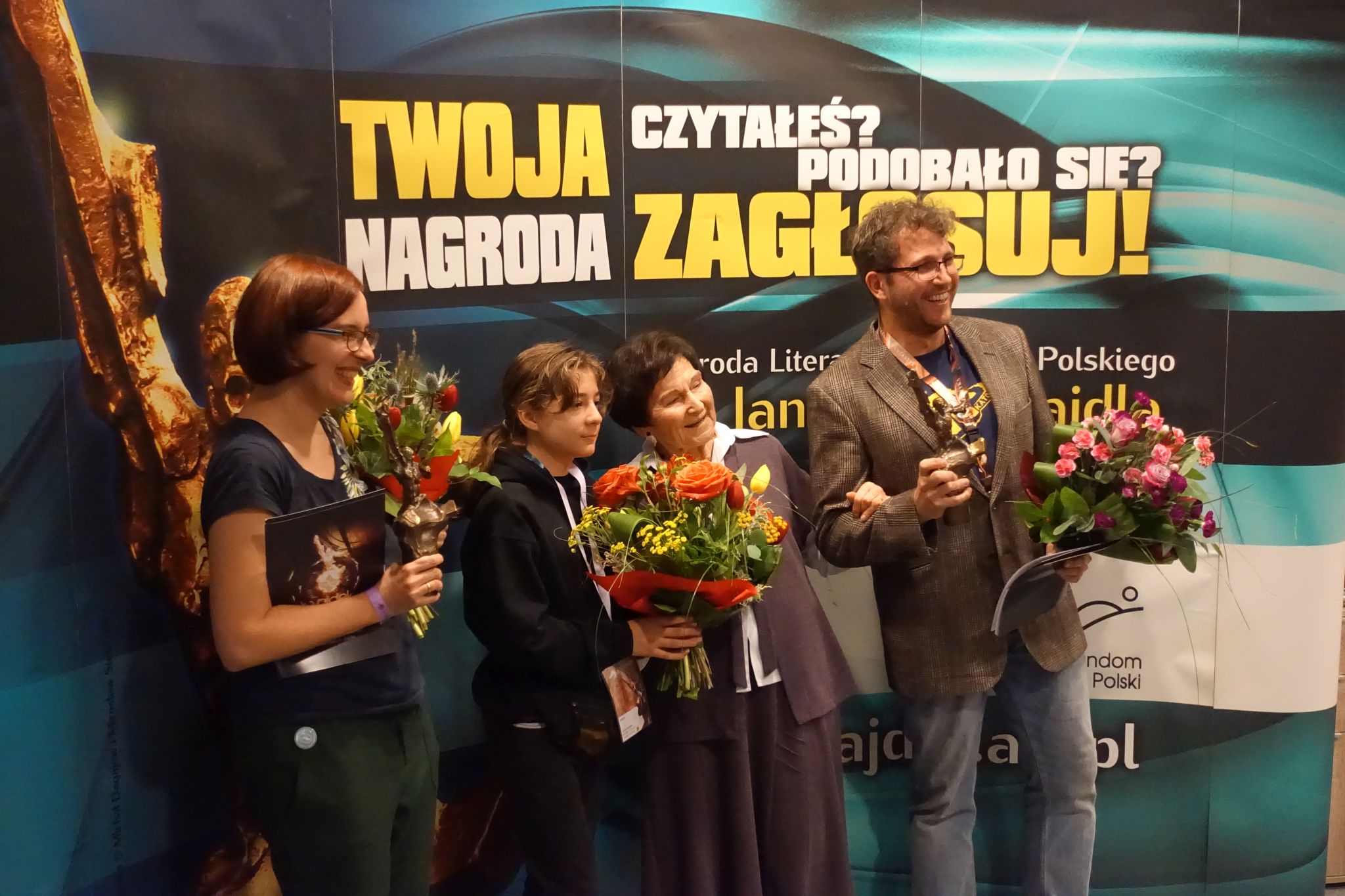 Winners of the Janusz A. Zajdel Award – Magdalena Salik (to the left) and Michał Cholewa (to the right). Between them there is Jadwiga Zajdel and her grandson.

I stated it many times but will repeat myself – conventions are about meeting people. I spent most of Imladris – Polcon in Green room (it was called VIP room but I like the Green room name better). There I was socializing with Toothie and programme participants and guests. It was a good time. I regret I didn’t have enough time to go and talk more to friends “on the corridors”. Yet at least I had some nice conversations in the room where I spent most of my time. 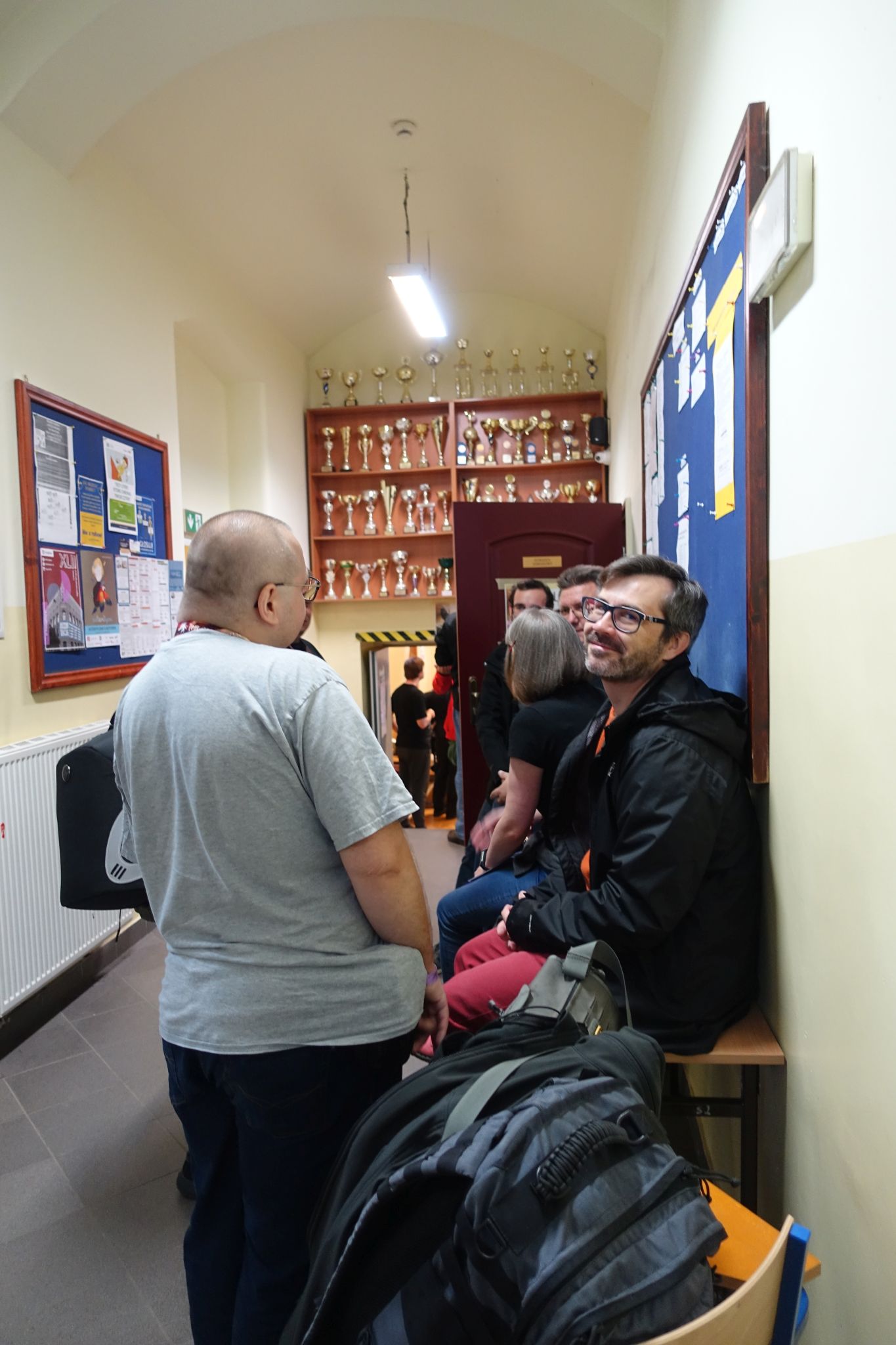 People socialising at the school corridor during Imladris – Polcon.

On the evenings we had parties in a nearby pub. I didn’t stay for long on Friday and Saturday but I was there a bit longer on The Dead Dog on Sunday. Yet after Saturday evening I got falsely accused! It seems someone ate a full bar of chocolate in the toilet and left the wrapping there. I understand why people thought about me… ;). I could eat a full bar of chocolate myself but I would throw away the wrapping! Still my explanations were not enough and the incident was assigned to me. It even landed in the convention newsletter ;). Now I need to find who framed me!

Overall I enjoyed the con

What can I say? I am in no position to judge how well the convention went. I can only say that I enjoyed it. One of my dreams came true and Polcon was again in Kraków. We had to wait for twenty years for that but it happened! I was able to help a bit and I hope that what we did was good. I have some nice memorabilia and am pretty excited both the next Polcon (in Łódź) and next Imladris (in Kraków).