Pyrkon is the biggest Polish convention – last year there were over 40 000 people. This year the number of participants has not been yet announced but I really doubt it will be significantly smaller. Being so big has some perks but also some disadvantages. All in all Pyrkon is doing a great job promoting SF/F and overall geekiness, however for me this edition wasn’t as good as the previous ones.

Being busy is not as fun when you are missing Pyrkon

It is hard for me to properly review the entirety of the convention as I have spent large part of it sitting at a fantable and promoting Worldcon 75, Imladris and last but not least – our fanzine Smokopolitan. This took me almost whole Friday and large part of Saturday (and „only” 2 hours on Sunday). 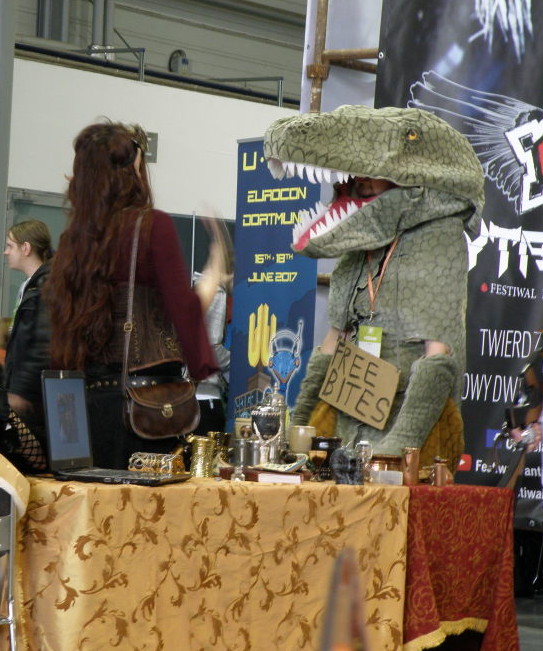 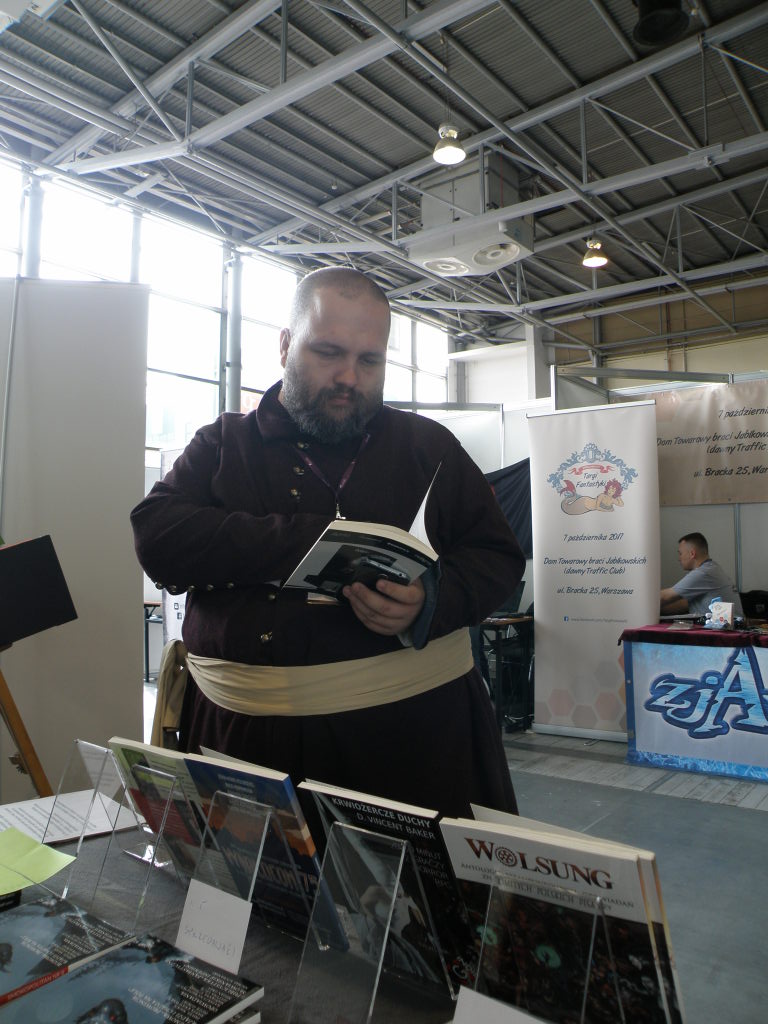 One of Smokopolitan’s authors checking out the newest issue

Unfortunately because of the small walls separating the tables it was not as easy to speak to our neighbours so sitting at a table was not as fun as it was during Eurocon in Barcelona. Also because Pyrkon is so large people were less keen to stay longer at a fantable to have a chat. They were rather asking questions, sometimes buying fanzine and then moving on to gosomewhere else. This is of course one of the disadvantages of such a big event – one does not have enough time to visit everything they would like to.

Since 2011 Pyrkon is taking place at the Poznan International Fair. This is a very huge space with multiple buildings (not all of them being open for Pyrkon members). It is the biggest conferencing and fair space in Poland. Pyrkon 2017 was using 10 buildings and a lot of the open space between them. Some of the buildings were hosting programme while other were simply large pavilions used for dealers hall, enormous food court, video games, board games etc. When I have firstly visited this venue in 2011 (and smaller part of it was available for us) I found it extremely easy to get lost in there and it took me some time before I was able to find certain programme rooms without a map. 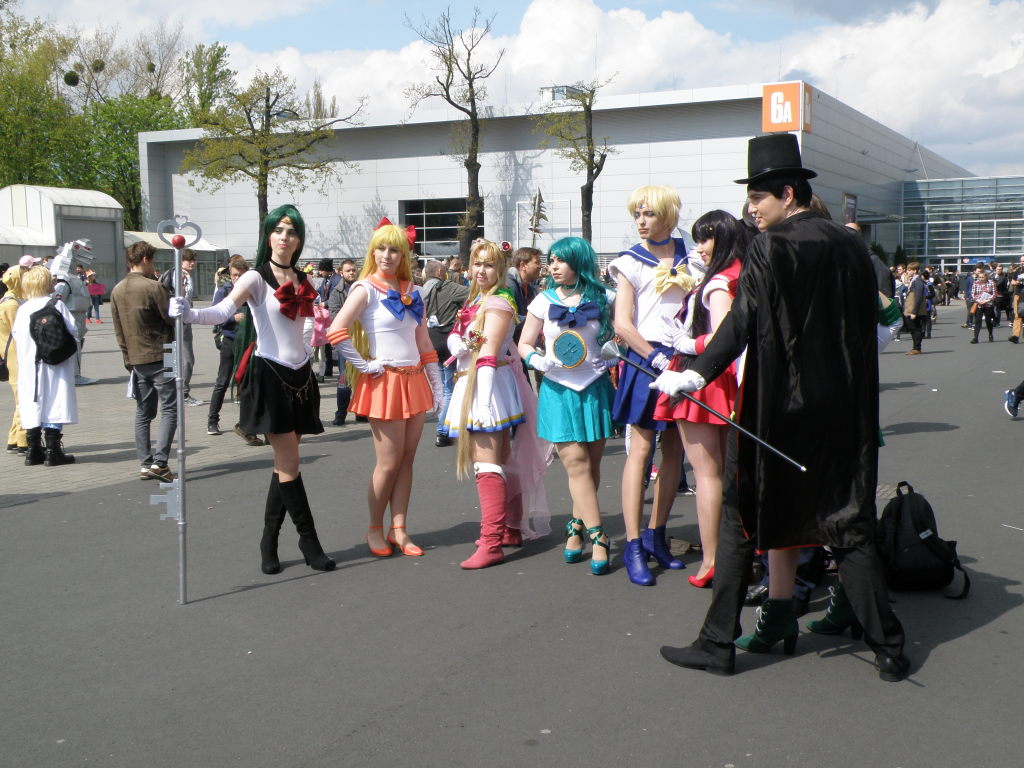 Cosplayers in front of 6A building

When whole venue is filled with crowds of fans, many of them wearing cosplay, it looks like a city district constructed to celebrate geekiness in all its variety. If the weather is nice it is simply a pleasure to just walk and watch people having fun. 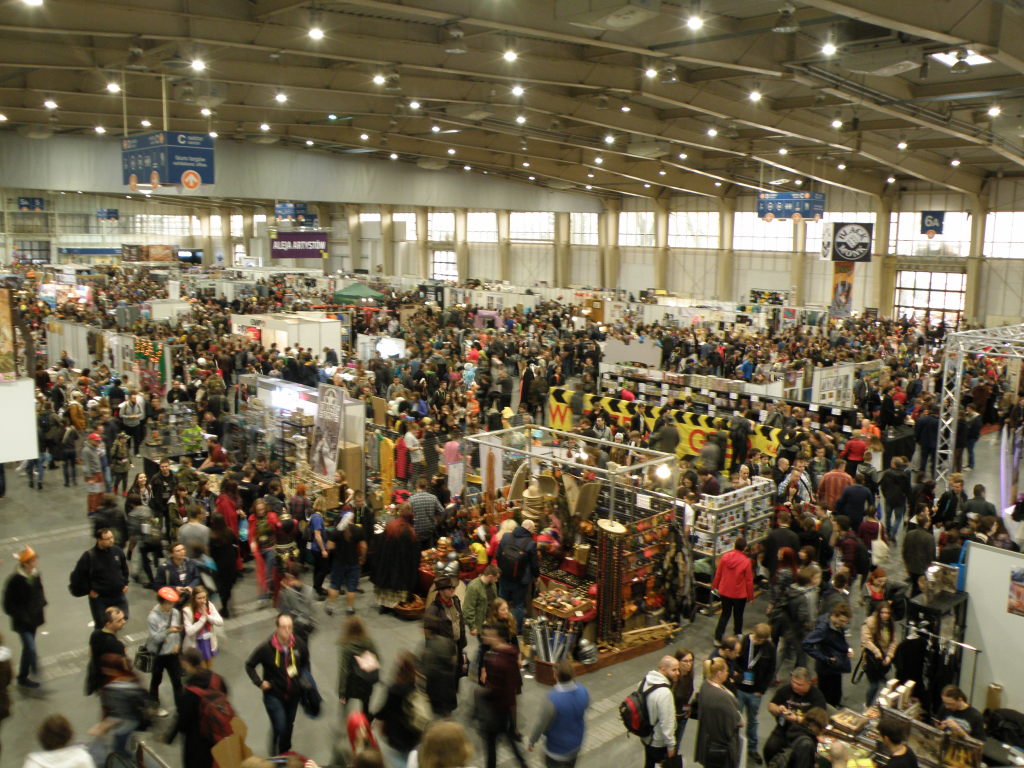 The queue is out there

Having the programme membership I did not have to wait in line to get to the convention but some of the other members were less lucky. Still, the entry queue for sure was only the first one. I have heard about people who were waiting for two hours in front of the programme room just to be sure that they will be able to enter the programme item they wanted. I had the occasion to visit only one speech (apart from those taking place in fan initiatives programme zone) and despite the fact it was Sunday morning the line was quite long (but at least everyone was able to come into the room). While I was walking through the buildings I have seen other queues standing in front of the door to every programme room I have seen (again, I haven’t visited all of the programme buildings).

Even when I was planning to eat something there was a large group of people waiting for the same in front of me. I think that presence of the queues at almost every step is the price we are paying for having such a big event. With so many people in the venue it is almost impossible to avoid it. I haven’t been to San Diego Comic Con but as far as I know queues there are even longer and one needs to carefully choose the programme they would like to visit. 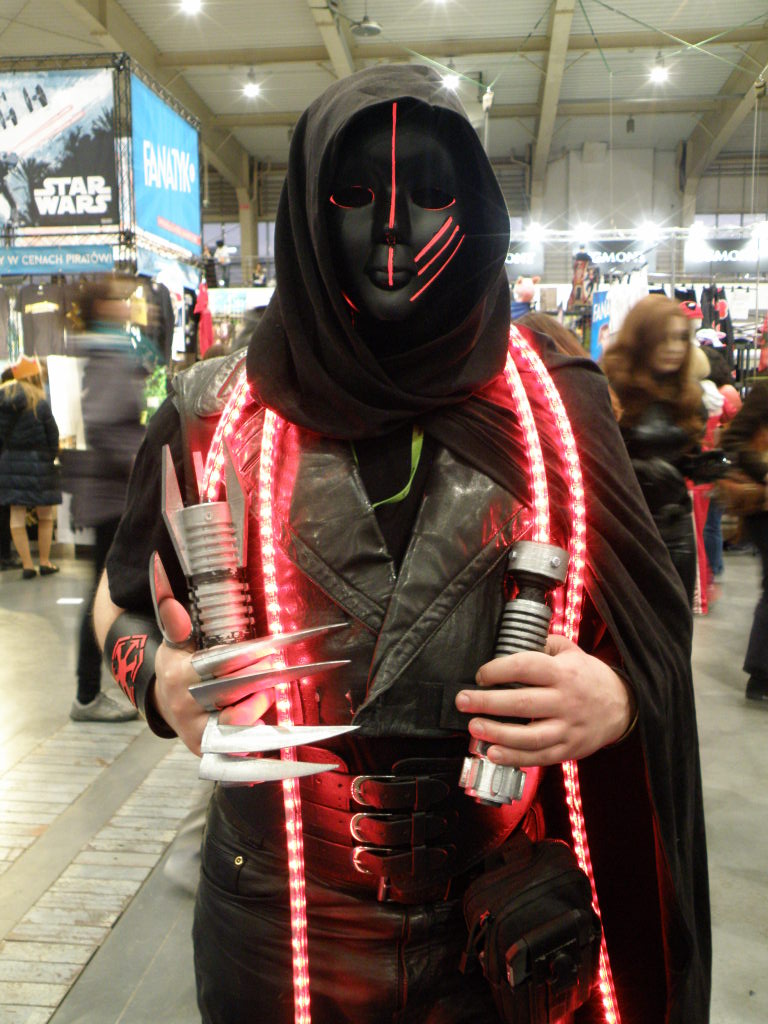 One of the cosplayers

As I have mentioned before, I have spent more than half of the convention manning our fantable and this means I was not able to visit large part of programme items. Unfortunately when I was free the programme was not as interesting as in previous years. Also knowing about large queues I was less keen to try to attend programme items that were less interesting to me. I really regret that because usually Pyrkon had a great programme I really loved to participate in. 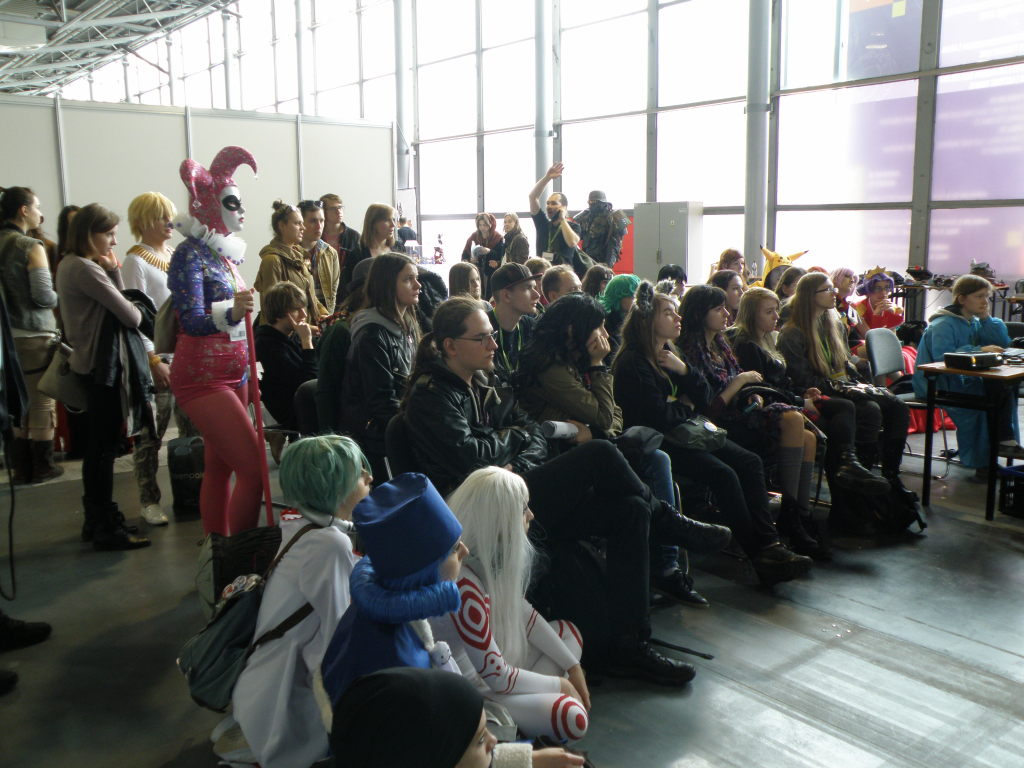 Programme in the fan initiatives space

What is good is that the only typical programme item I have attended was a great speech about predicting future. It was held by Michal Protasiuk – Polish writer whose book (Struktura) was awarded with Jerzy Zulawski award. If the whole programme stood on such level then I must really regret not having time to visit more items. Speaking about regretting I was not able to see any programme item of Peter Watts and Michael Pondsmith, and this is really a pity :(. 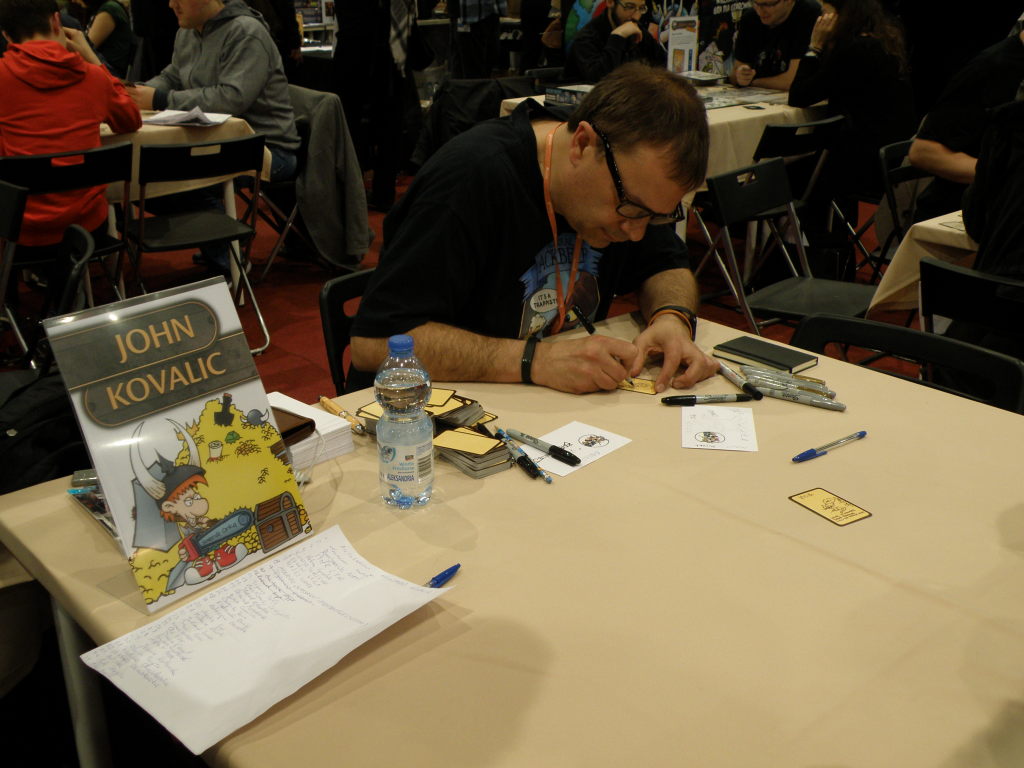 Apart from guests mentioned in previous paragraph many others were invited either by Pyrkon itself or one of the dealers. It would take a lot of space to list them all here but I was really happy that I had a chance to meet John Kovalic. Instead of giving only standard autographs he was also drawing portraits/simple drawings on Munchkin cards and yes, I am extremely happy to have myself portrayed on a card allowing to get a level in Munchkin ;). If you would like to check other guests the full list is here.

I do believe that Pyrkon is doing a great work with promotion of geek culture as a whole. Convention is drawing the attention of multiple people, including those who would probably never attend any other con. With such a vast venue and multiple attractions (both in buildings and outside of them) it shows to everyone that being geek is cool and that there are multiple possibilities to enjoy oneself with SF/F culture. Whether someone prefers gaming or literature, for sure they will find a lot to do during Pyrkon. Families with children also had possibility to spend a nice weekend and I do believe that this openness of Pyrkon to everyone is extremely important. I hope it will help the fandom to grow and that disadvantages I have spotted will not discourage people from coming. 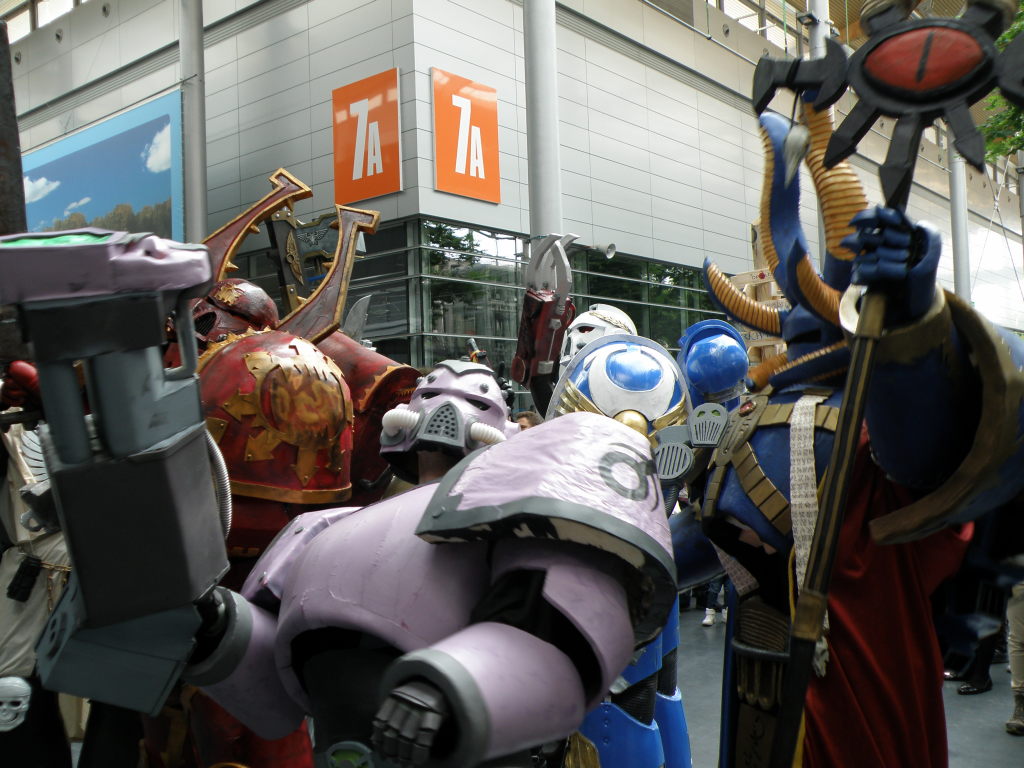 On the other hand for me the programme part was not as interesting as in previous years. I hope that this will change and in 2018 Pyrkon will have not only a lot of great guests but also programme that I will find really interesting. I am crossing my fingers to see Pyrkon 2018 as big as this year with tons of good programme items and some minor issues being solved.

The next post will treat about Whomanikon – Doctor Who convention and will be published on 19th May.