This is the most difficult post till today. It’s the case because of two reasons – it is the first time I’m writing about convention which I was running myself and secondly I am not a Doctor Who fan – I’m just helping my friends to organize this convention. So how did Whomanikon 2 go?

Beginnings of Whomanikon – the Polish Doctor Who convention

I do remember the beginnings when three future-to-be organizers came to our SF/F club asking for help with a Doctor Who convention. At first I was a little bit skeptical but if there is such an idea – why shouldn’t I help? A few months later first Whomanikon took place. It is always hard to judge convention you were involved in but in my opinion it went very well and by looking at how people were enjoying it, I think that their opinion was the similar to mine. And now – one year later – the second Whomanikon took place. Just as the year before, admission was free but this time the convention lasted for two days (1st & 2nd April 2017). 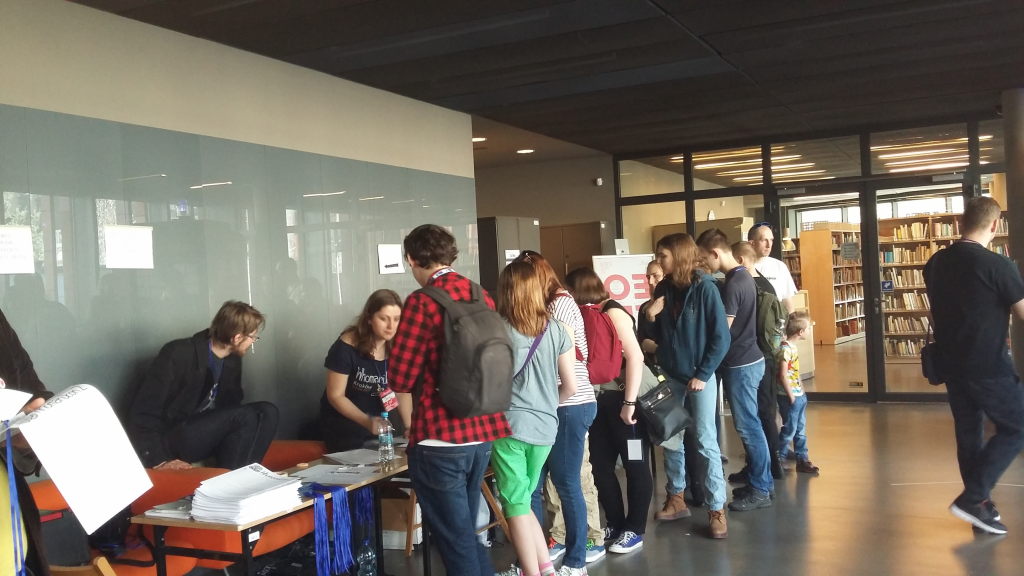 Whomanikon 2 started on the April Fool’s Day and therefore a few jokes were prepared. They included giving plastic daffodils to people (a reference to Terror of the Autons episode from the 70s). Of course other tricks were not so cliquish – they included putting part of the programme titles in foreign languages, adding some funny stuff to the programme book (well, calling it “book” is a little bit to much for one A3 and one A4 pieces of paper, but still). The second day of the convention was the World Autism Awareness Day and in order to support it, we have announced taking a group picture of convention members dressed in blue.

The programme is always important

I cannot judge how good or bad the programme was – as I saw only two episodes of the series and during convention I attended just one presentation. On the other hand I spotted that on some programme items a lot people were present. As a change, when compared to the last year, a part of the programme was in English and although we didn’t have too many visitors from abroad (mostly from Czech Republic), I hope it will change during the next edition. Apart from standard speeches and panel discussions, there were also competitions and, of course, games. The last included Doctor Who themed board games (and other board games as well), RPG sessions and even LARP. The latter was not very popular but several participants had (hopefully) a good time. 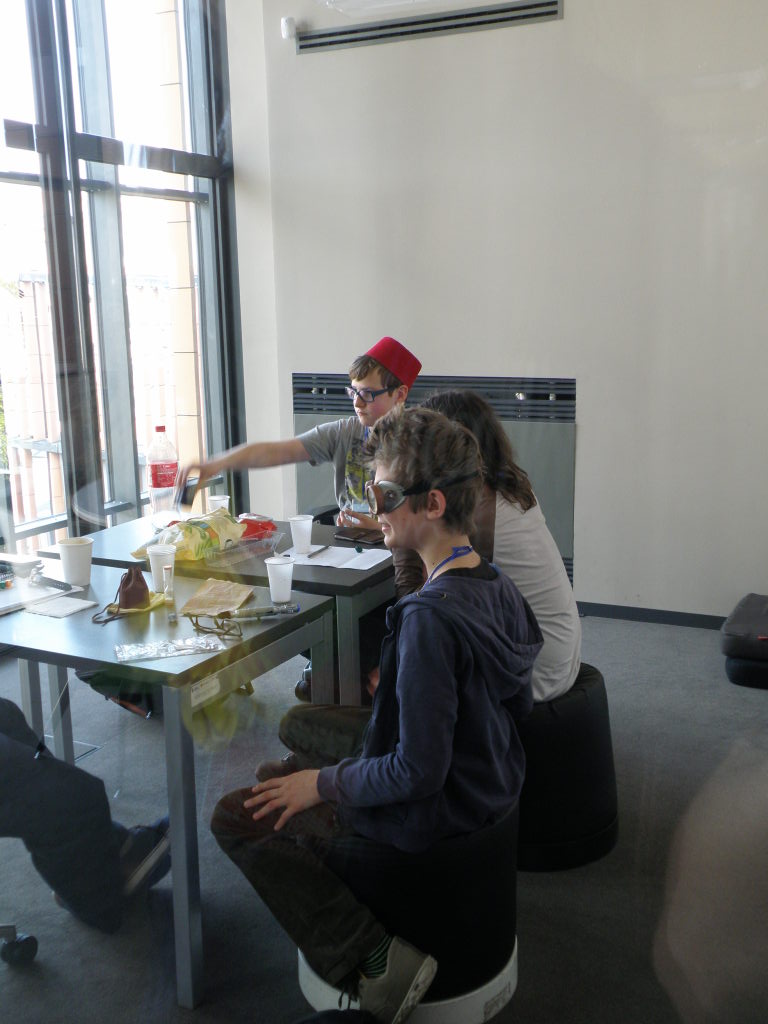 One of the best ideas was to invite people who created Doctor Who object replicas. Thanks to that we had both TARDIS replica (the same was present last year) as well as mobile Dalek replica. The latter was absolutely awesome and a lot of people were interested in it. Its constructor gave a speech on how he made it (basing on Project Dalek website). A few of the lucky members and organizers even got a chance to enter into the Dalek and have a ride. Despite the fact that I am not a fan of the series (yet!), it was terrific to watch it moving. Creating it required definitely a lot of time, money and heart, and the effect is really awesome. We just regret that it is probably the only Dalek in Poland :(. As for the TARDIS, inside it (it was not bigger on the inside 🙁 ) one was able to find a few gadgets (sonic screwdriver, fez, etc) that were meant to help the attendees to make some nice photos. In general both replicas were quite popular among the participants (including organization team…).

Although the convention was not very big (just around 500 people participated), there were a lot of dealers. None of them was specializing in Doctor Who merchandise (that is generally very hard to get in Poland) but most of them had some products that were related to the series (including awesome “clothes” for the mugs that were resembling the Doctor’s clothes!).

Helping on a convention when you are not really into the topic is the better the more things you have to do. This year I did not have too many tasks and that was a pity. I hope I will have more time to help with the next edition. 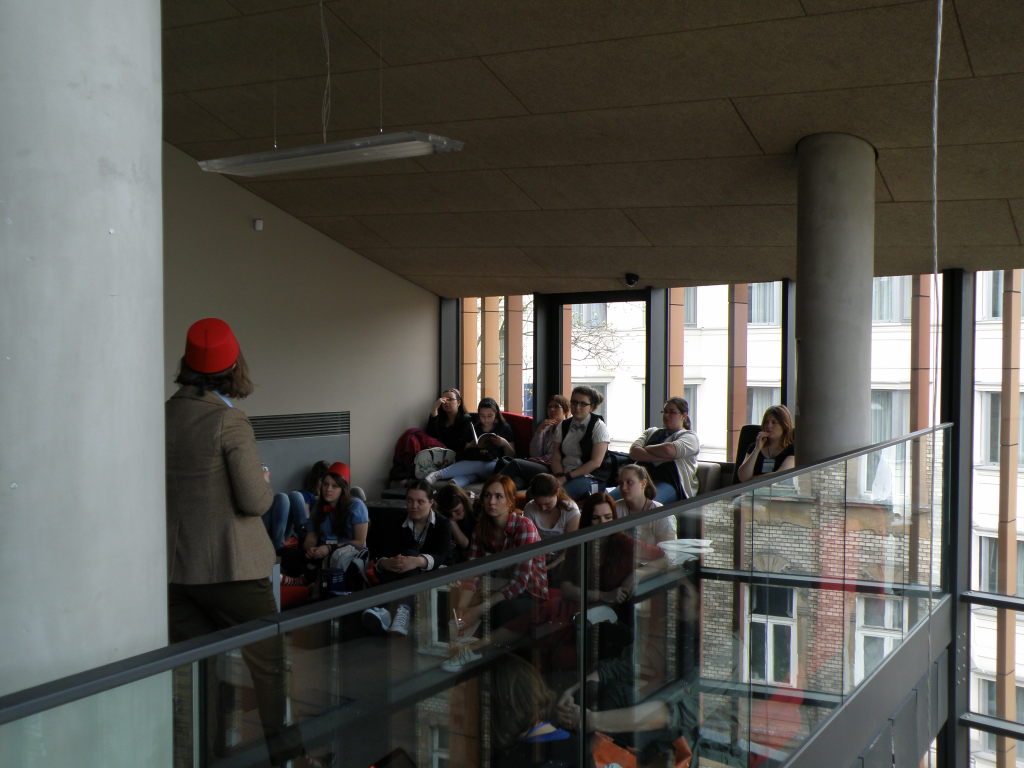 One of the lectures

In general I think that Whomanikon went well. There were no accidents and the majority of the programme happened on time. I am not sure what will be the future of the con but I hope next edition will take place. I also hope that till this happens I will watch at least one season of Doctor Who as it would be strange to help on this convention for the third time and not know the series at all.

The next post will be published on 1st of June and will treat about Polish fan culture and traditions.