The 18th Falkon took place this year. It belongs to the biggest conventions in Poland and although it cannot be compared with Pyrkon, it is still huge. Unfortunately, almost every year I am at Falkon, there are some issues. Still, I really like this convention and I am always eager to visit Lublin in November.

My first Falkon was in 2010. At that time, it was held at WSPiA (one of the universities in Lublin). The convention was really awesome. I enjoyed the programme so much that I really wanted to go to the next edition. Unfortunately, the programme was not so good in 2011, but it was still a decent con. 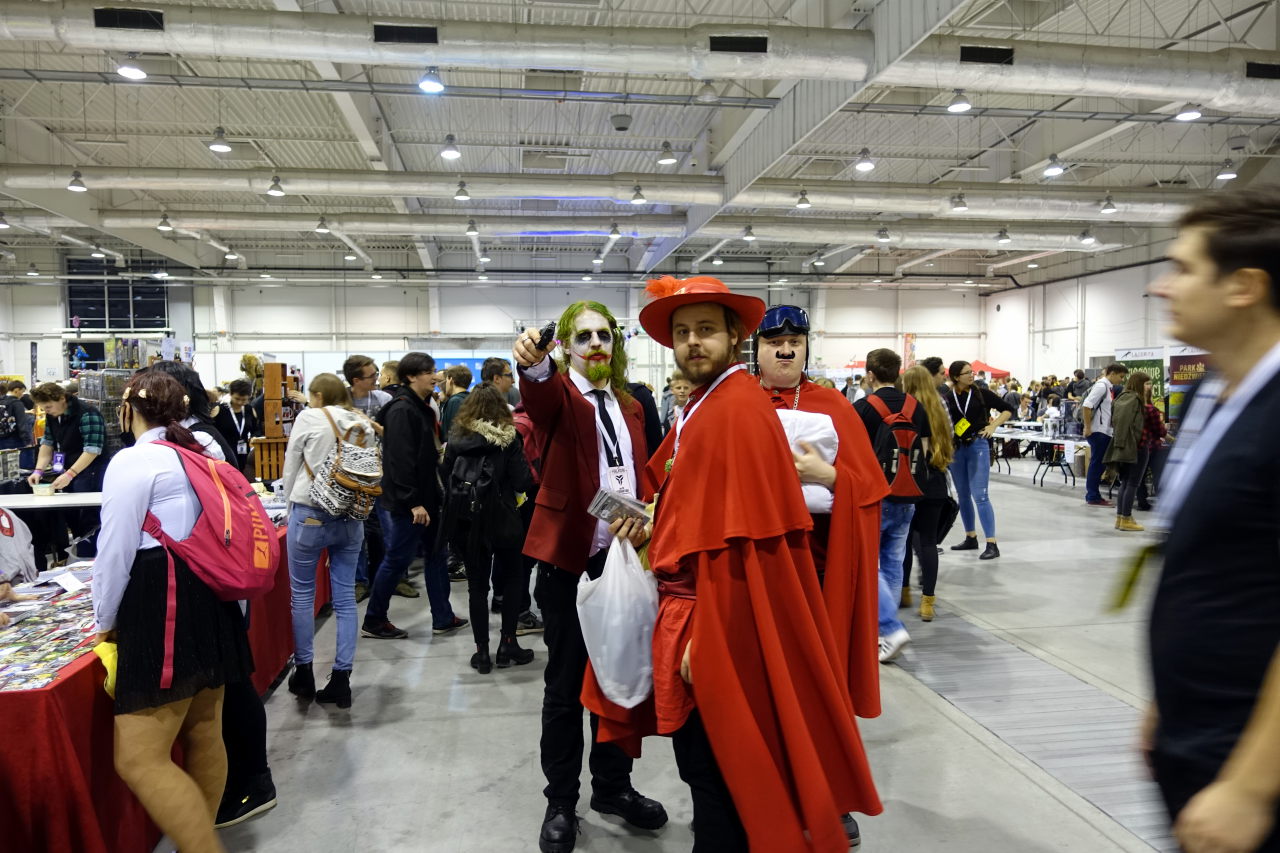 Falkon was full of cosplayers

Then, in 2012, convention moved to Targi Lublin (Lublin’s Fair) in the city center. I don’t remember too much things from 2012, but one year later the programme was disappointing. At the same time Falkon became an important social event for me. I met a group of fellow fans with whom I had a great time. Since then, the social part (especially the time after the programme hours) has become very important. Two years ago, I was extremely disappointed with the programme and I was even thinking about skipping the next Falkon. In fact, I really skipped it, as it was held the same weekend as the Barcelona Eurocon. Yet I regretted it, as the convention had a new person responsible for the programme and the new blood made the programme more interesting, in my opinion.

Was it worth to Join the Federation in 2017?

This year, Falkon was held under the motto “Join the Federation”. The programme was managed by the same person as last year and I quite enjoyed it. Maybe it was not as good as in 2010, but I was still satisfied with it. I think that the “Fedeartion” part was missing, though. While at the convention, I was unable to see and feel the Federation theme. It was not clearly visible in the programme and it was not “in the air”. For me, it looked just like the name someone had to put on the poster and in the convention materials. 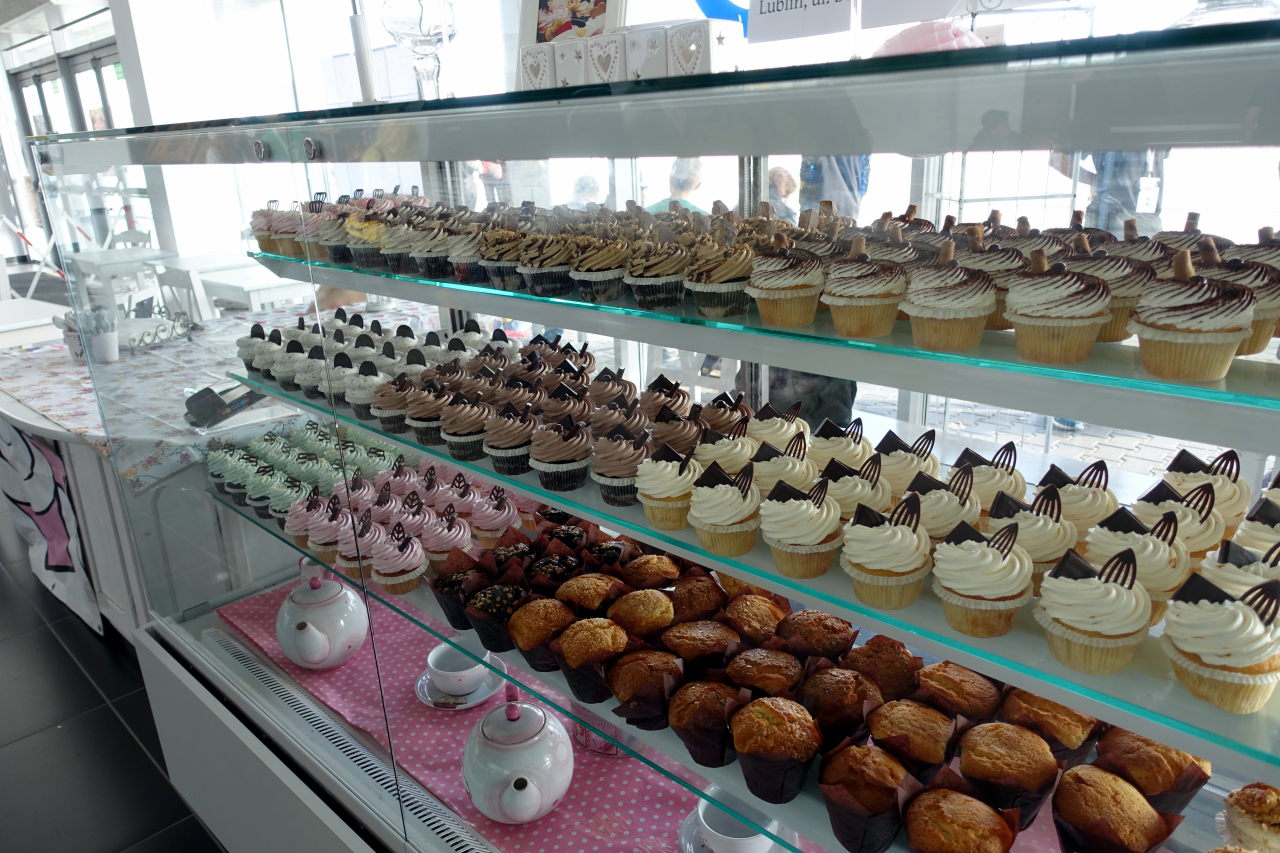 One cannot simply eat only one cupcake

The growing membership numbers were not good for Falkon. It had to move from the old venue to a new one. Although it is located way closer to the city centre, it is also not really suitable for the conventions we grew to love and expect. Targi Lublin has very few spaces that can be used as programme rooms. Because of that, every year a part of the programme is held at a school nearby. As November is Poland is rather cold, it is not the best solution. 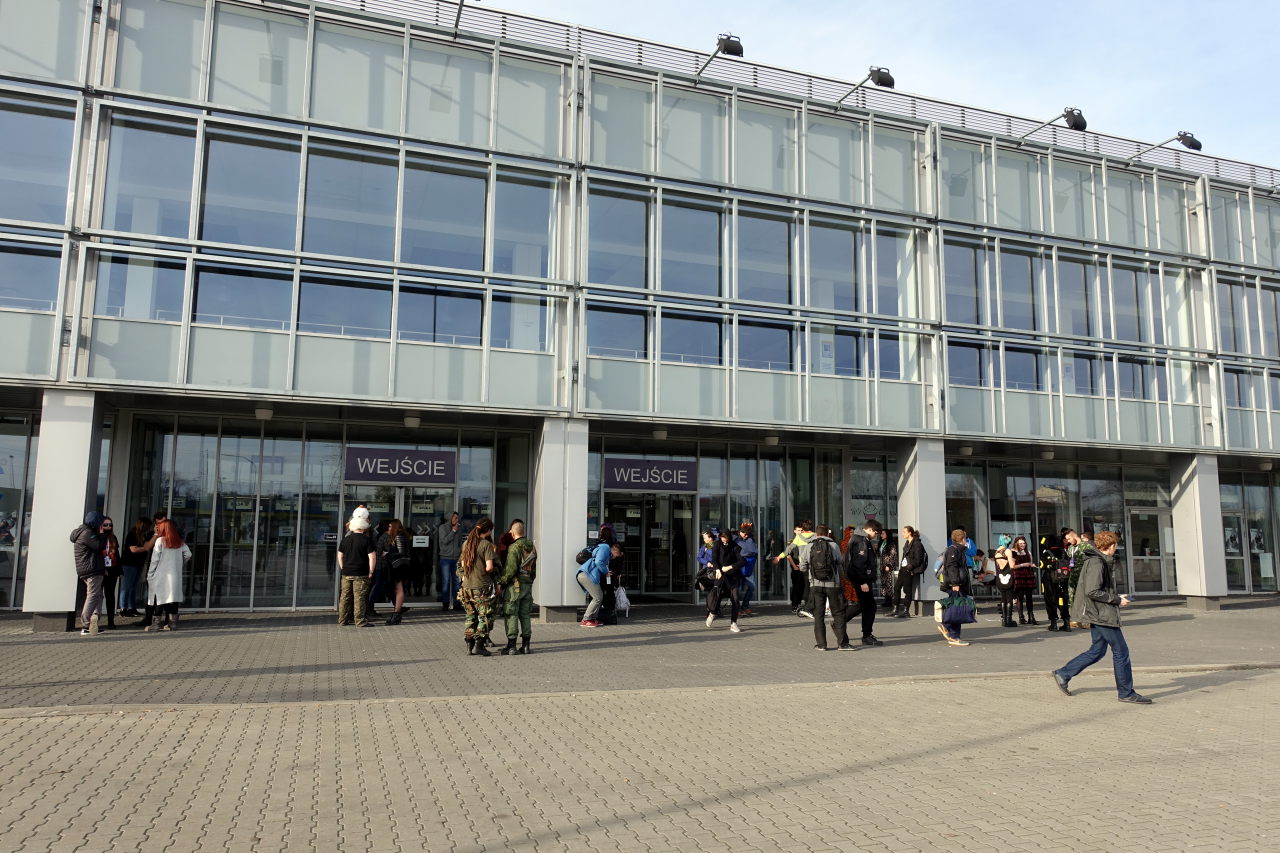 Entrance to the Lublin’s Fair building

As there is still not enough room for the programme items, some of them are held in tents connected to the Fair’s building. Unfortunately, those tents tend to be really cold (two years ago I went just to one item there and I decided not to even try another one).

The good part about Lublin’s Fair is that it has two big halls. One of them was full of dealers, fantables and it contained the e-sport zone. The other one housed a big Games Room and a food court. A part of the other hall was also arranged so that it could accommodate two programme rooms and the Green Room. 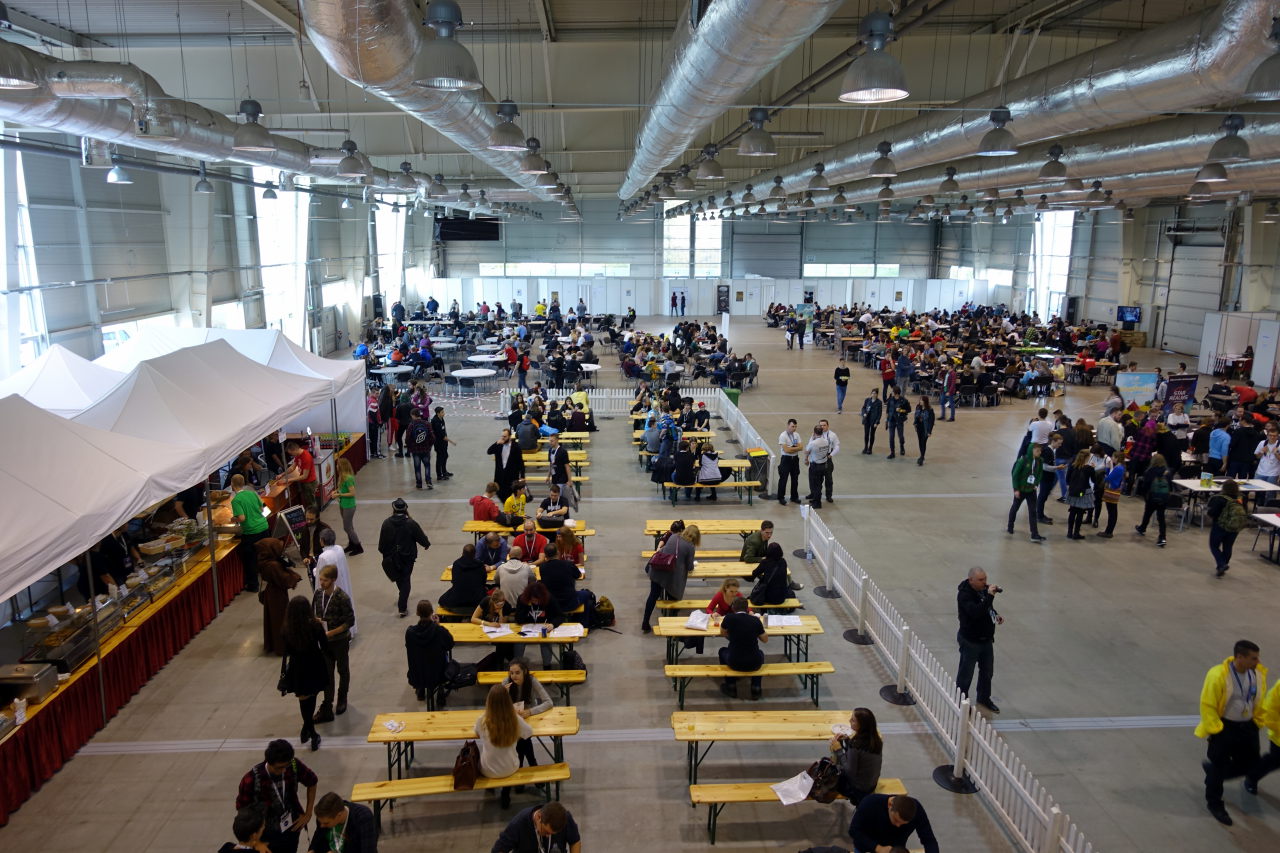 Food court and Games room visible from above.

The school, in which the programme items were held, is really nice. It gave the feeling of a “classic” Polish con (which, as I suppose you figured out by now, I really like). The building was used for RPG and LARPing programme as well as for the M&A part of the con. There was also a second school used for sleeping rooms, but I haven’t been there.

Spending my time on programme…

I am afraid I tend to write too much about the conventions without mentioning what I am doing there. This is not the best approach so I will try for a better balance from now on. This Falkon was relatively “lazy” con. I attended a few programme items and I learned that there is a species of shrimp that is using plasma guns. Well, these aren’t plasma guns, not really – but as the shrimp uses its claws to stun prey with a shock wave, it generates plasma. As my friend published Metamorphosis Alpha RPG in Polish, I really had to let him know it. Shrimps with biological plasma guns would make for an awesome monster 😉 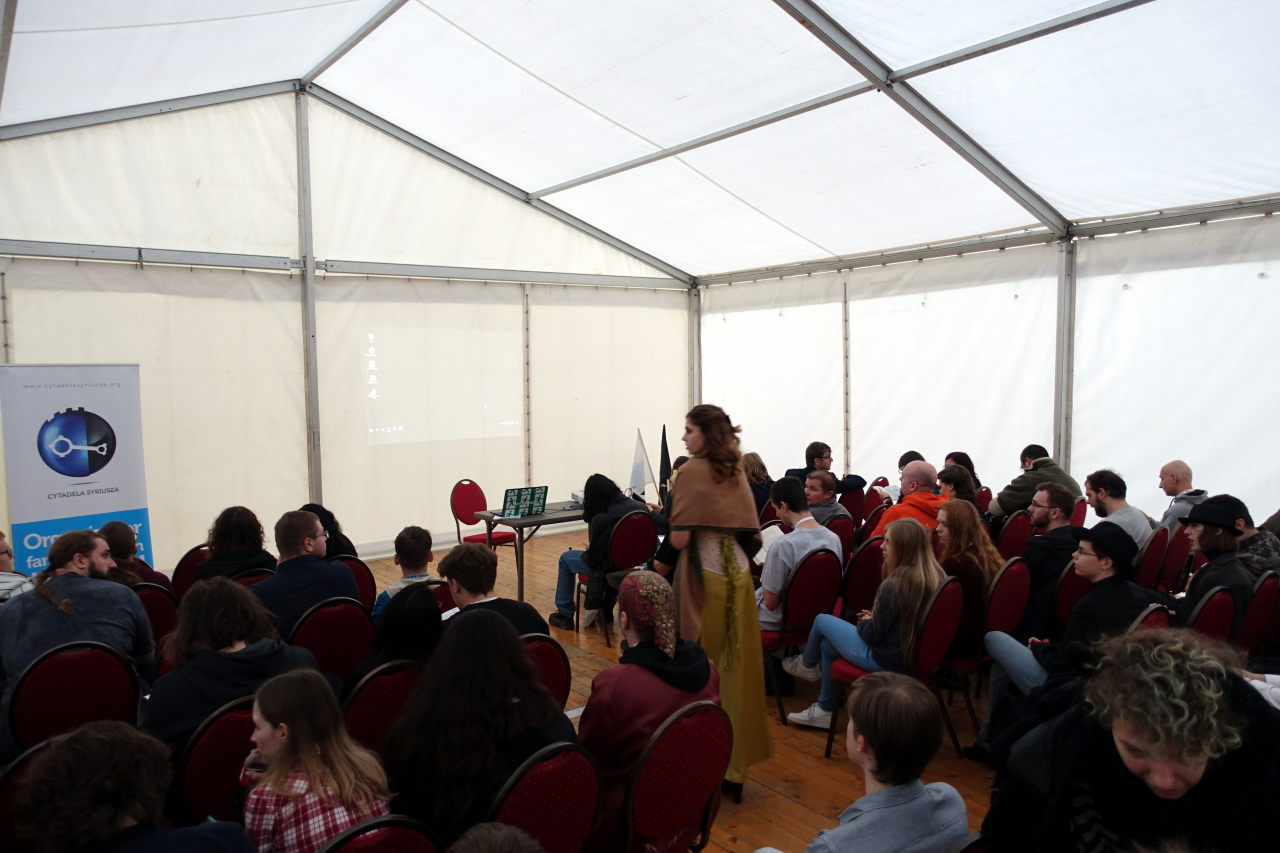 Programme tent – this year it was relatively warm

There was one very interesting panel entitled What the fandom is about? I was surprised to see that the panelists were representing mainly media fandoms (Doctor Who, Star Wars, Supernatural…) and one panelist represented the Manga and Anime fandom. What was missing was a representative of the traditional SF fandom. Of course, all panelists are attending typical SF cons, but that was not their main point in what they were saying. The entire discussion allowed me to see the fandom (or fandoms) from a totally different angle. I am not a media person myself and I don’t participate in online fandoms concentrating around some franchise, so this is why listening to the panelists gave me a really nice insight into this unknown territory. 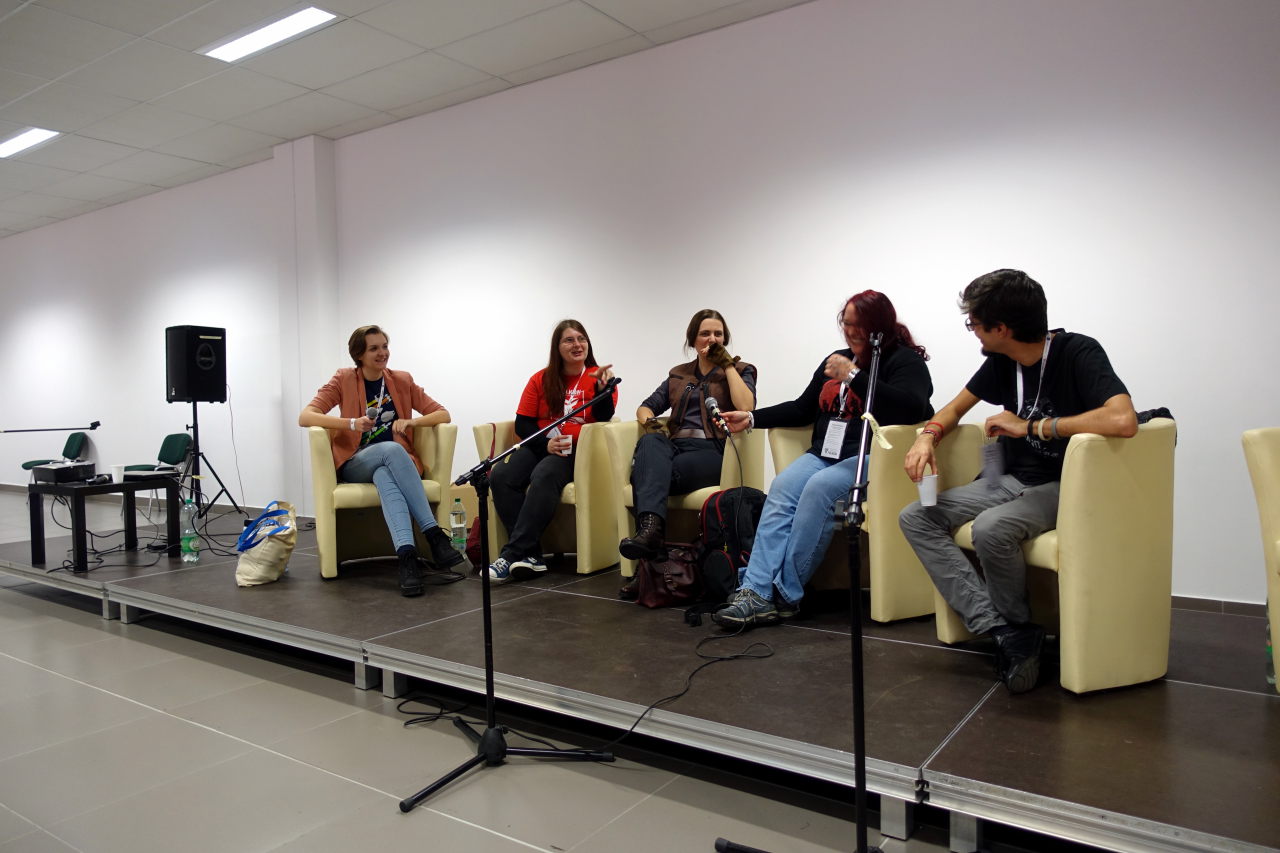 What the fandom is about panel

…and walking around the con

Apart from attending the programme, I spent a lot of time walking around the dealers hall and chatting with friends. I am happy that apart from dealers and typical fantables there were also other non-fandom related organizations showing what they do. There were two universities looking for new students, there was also another group – Mądry Dzieciak (Smart Kid) whose representatives were showing science stuff to kids (and I could not resist to check if Van de Graaff generator would make my hair stand). There were also students from the Technical University in Lublin presenting a prototype of the Mars rover they are preparing for the Mars rover competition. 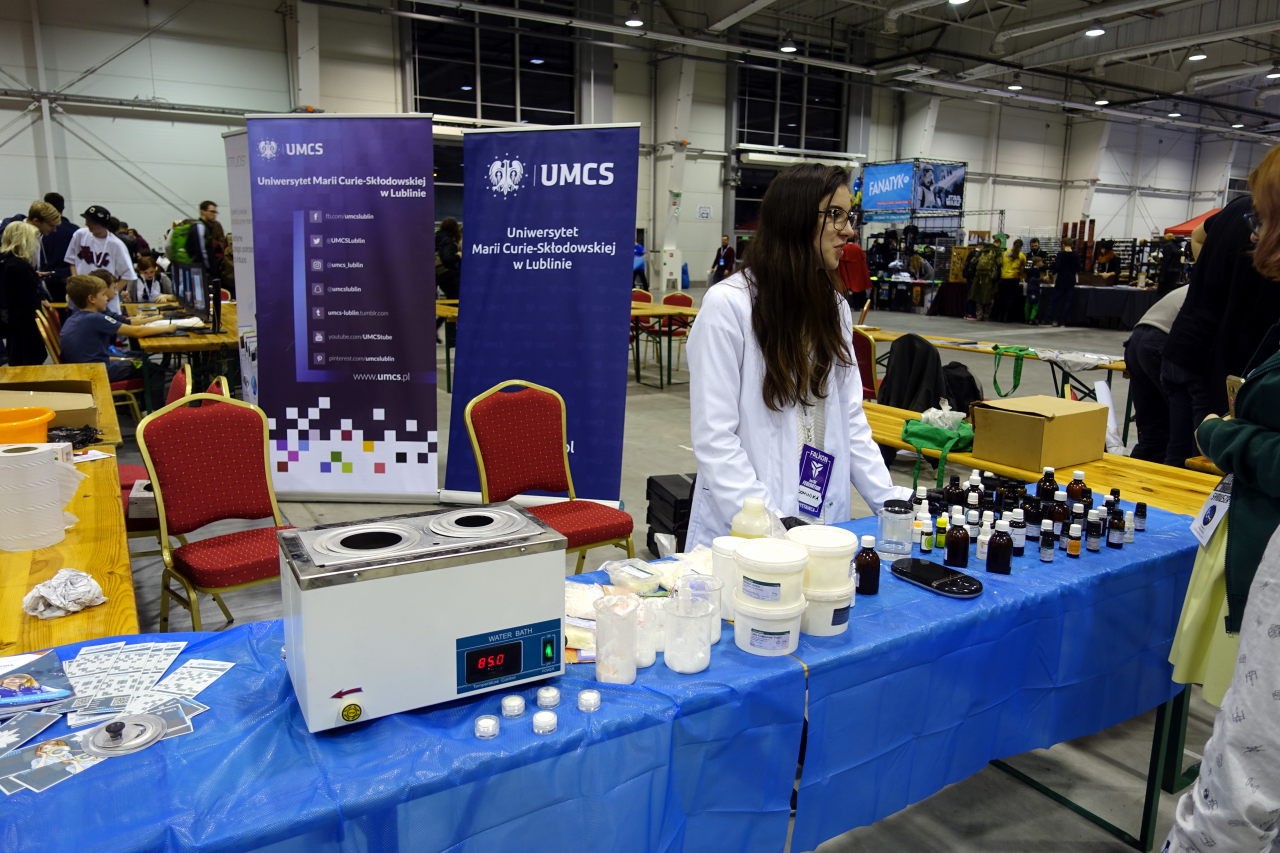 “Chemical” table of one of the Universities

What I really regret is that I didn’t have enough time in the evenings to spend with my friends. I can’t understand myself here – I was simply not in the mood to stay long in the pub and now I regret it. This is unfortunate, as over the past few years, those pub evenings were giving me a lot of energy. 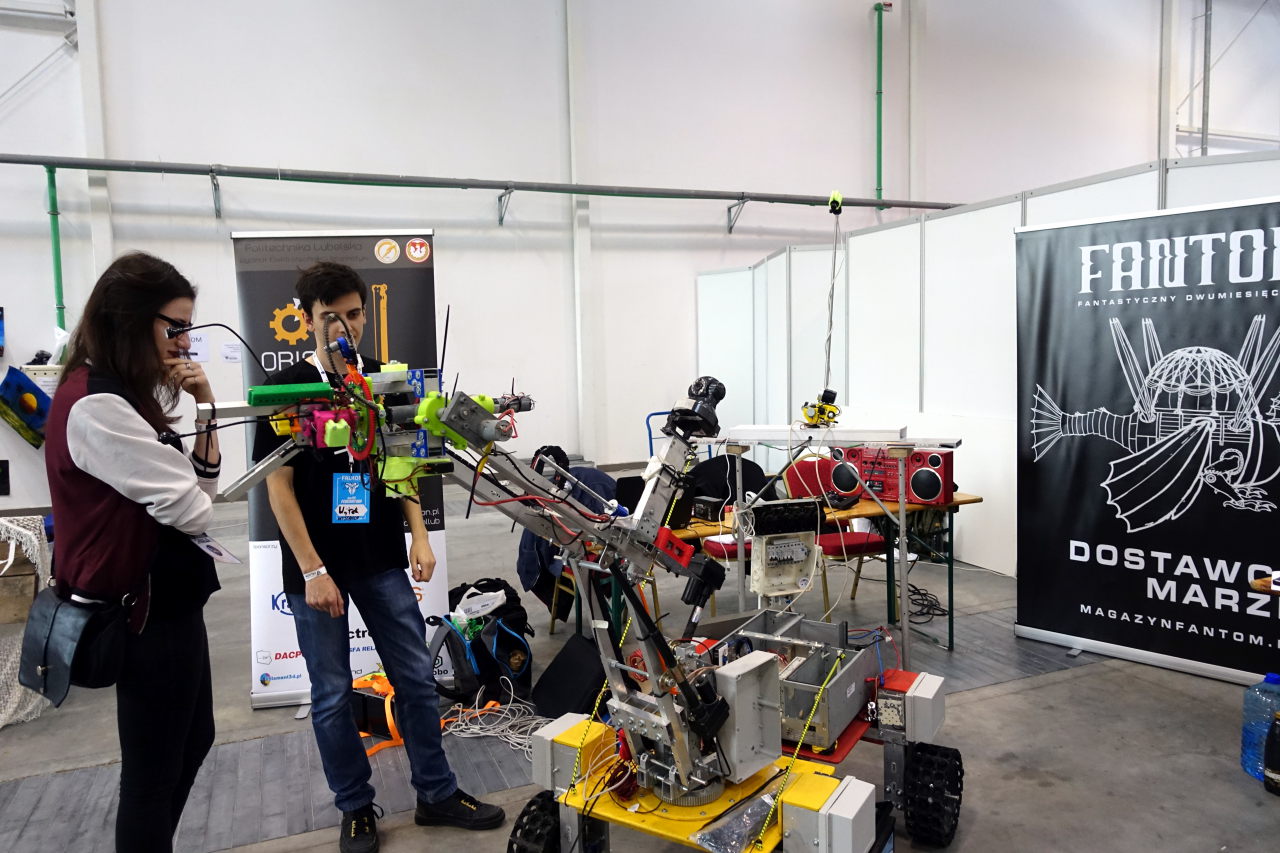 There were a few things that surprised me. Firstly, apart from convention badges, we also received wrist bands that we had to show upon entering the venue. I really don’t like wrist bands and adding them on top of the standard badges is useless (but maybe it was the venue who forced the concom to do that).

I was a guest of the con and I regret that the only thing I did was that I moderated one panel. Still, it was nice that as a guest I received the convention backpack and a glass. In fact, Falkon prepared a lot of convention merchandise – apart from the ones I mentioned, there were also t-shirts, gloves and knit hats. 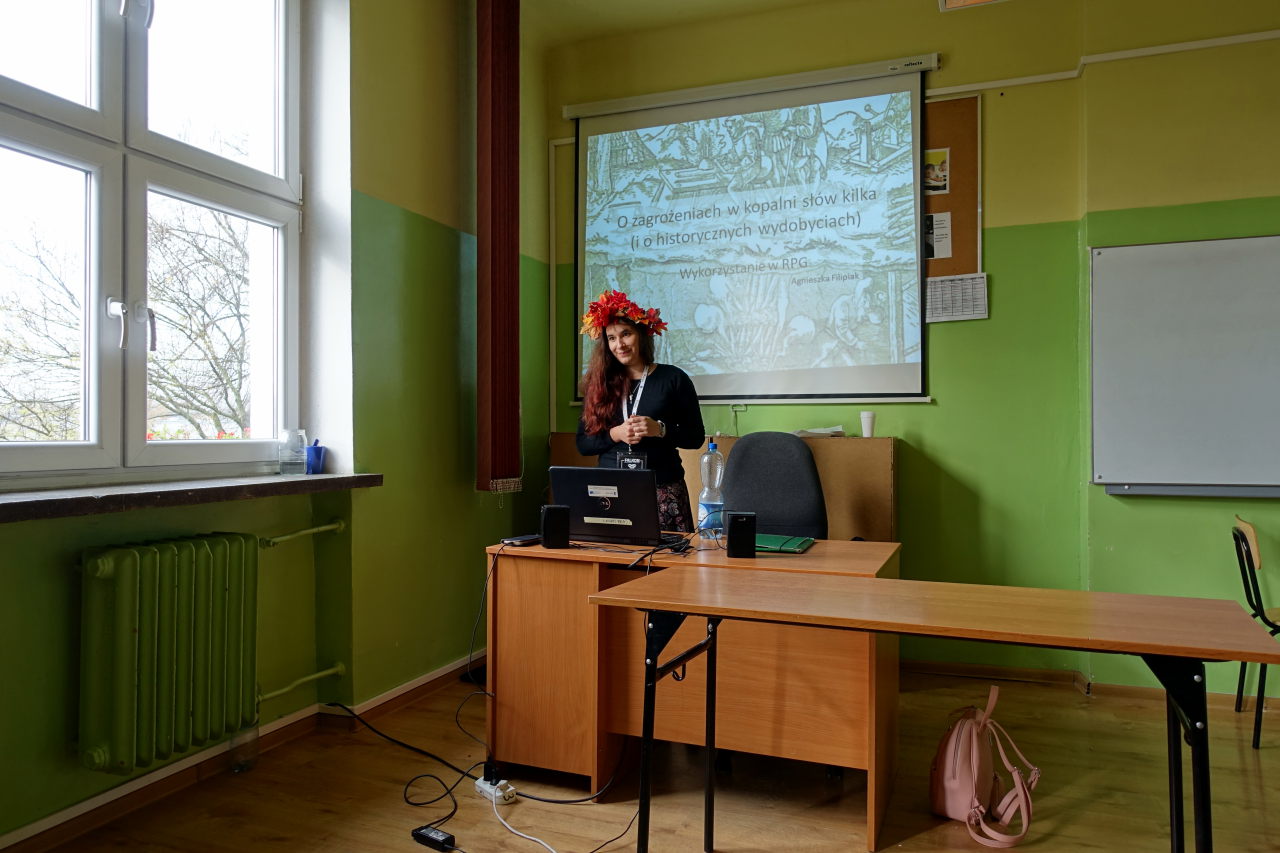 What I treat as a mistake in a fan-ran convention was a VIP room. It served a function similar to the Green Room, but was available only to “VIPs”. I think that on fan events we are all equal and having a special VIP room is not a good choice, as it only creates barriers. It would be way better if there was just one Green Room for all programme participants, including guests. 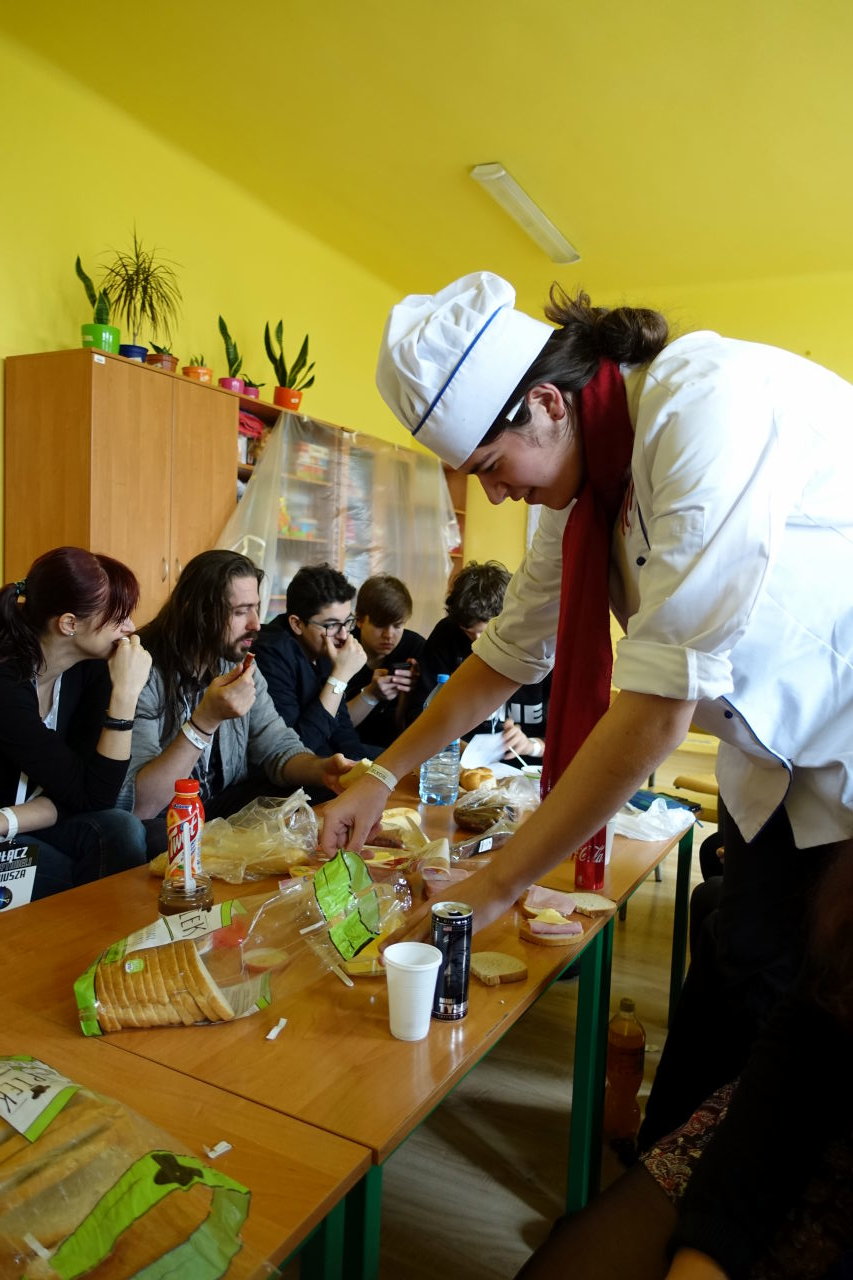 LARP breakfast held in school. LARP and RPG players brought the food and were eating together

All in all, Falkon was ok this year and I am almost sure I will attend it next year, too. I hope that the quality of the con will go up again and that I will have more time for my friends.

My next post will treat about Smofcon 35 and will appear in second half of December. In the meantime I’ll upload set of Falkon badges on FB.