Imladris has a special place in my heart. It was not the first convention I was a member of (this title belongs to DOJIcon 2), but it was the first SF convention I had the pleasure to attend. A few years ago I was very disappointed to learn that the con would be discontinued. To my delight, the convention was revived in 2013 after several years on hiatus. I suppose it is not a big surprise that I’ve been doing my best to visit Imladris every year since then. This year was no exception.

Imladris venue – it’s nicer on the outside

Imladris XVI was held for the third time in its current venue. It is a school right in the center of Kraków. The location is truly excellent but the interior of it is not the best one can imagine. The building looks really nice from the outside. Classrooms are ok and they are nicely equipped, but the interior corridors have seen better times. Of course, it is not an issue for the con, but you might be in for quite a surprise when you enter the building for the first time. 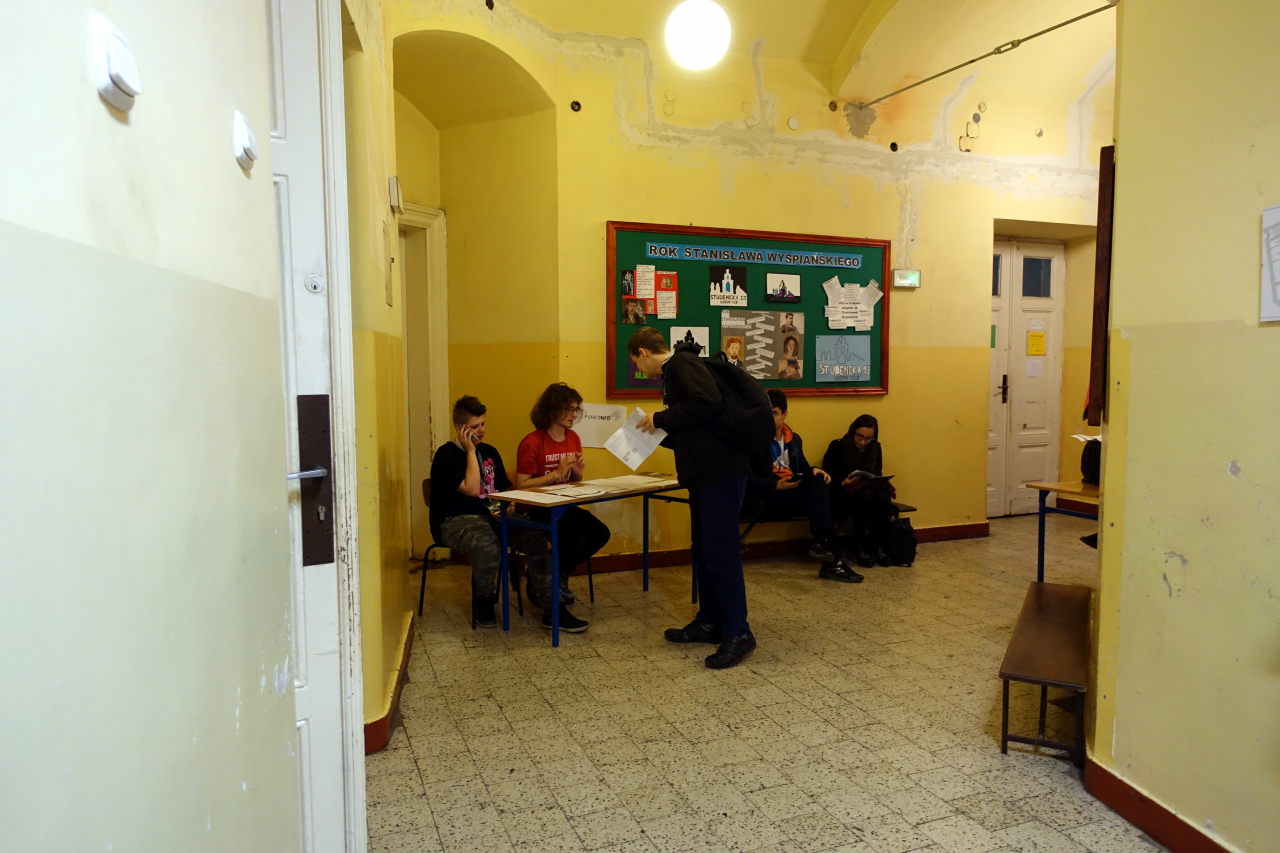 Guess where the power cord is

Over the last three years, I helped to organize the con. This year, it somehow happened that I was just a programme participant. On one hand I regret it – I really love this con and would like to do more. On the other hand it was a great opportunity for me to participate in more programme items than in the previous editions. All in all, it is good to have such break but I hope next year I will join the team again.

The programme itself was quite good. It was not very extensive, but all the items I visited were interesting. It would be difficult to choose the best one. For sure, we had an important discussion about the RPG market in Poland. It is a pity that publishers were not present (apart from K6 Trolli – a fan publisher translating early RPG systems into Polish). The filk presentation held by Kruffachi (one of the few Polish filkers) was a pleasure to listen to. More importantly, some plans regarding the future of filk in Poland were made – only time will tell what will come out of them. 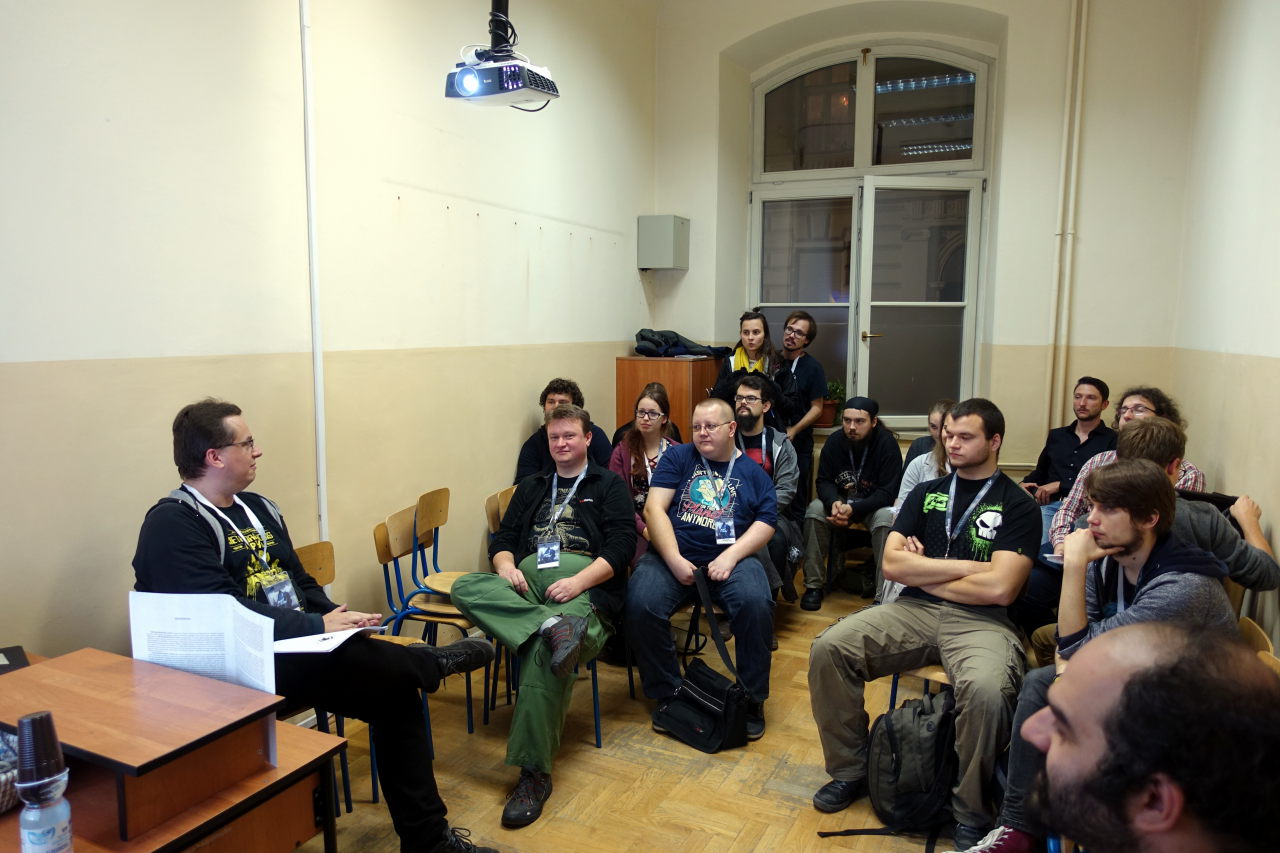 Seji from K6 Trolli gives a presentation of Metamorphosis Alpha

I gave a speech about Worldcon 75 and I took this opportunity to promote the Dublin event in 2019. To my surprise, more people were interested in Dublin than I expected. I do hope it means that more Poles will come the Irish Worldcon.

You may always try to win something

Competitions formed another programme category. I took part only in a speed-painting competition. I am not good at painting miniature figures, but my friend was looking for people to join the competition so I asked myself: why not?

We received a space marine figure, a small brush, some water and a drop of black and white paints. Then we received some paint in a random colour and we had 5 minutes to paint the figure – short break and the next colour came in – again we had 5 minutes. The process was repeated until we had 4 colours. We had 5 more minutes to finish painting (and we received silver paint at this stage). All in all, we had 25 minutes and 4 random colours to make a figure look – maybe not pretty but at least decent. I was lucky enough to land on the second place, which gave me an award and Imladris Thalers. 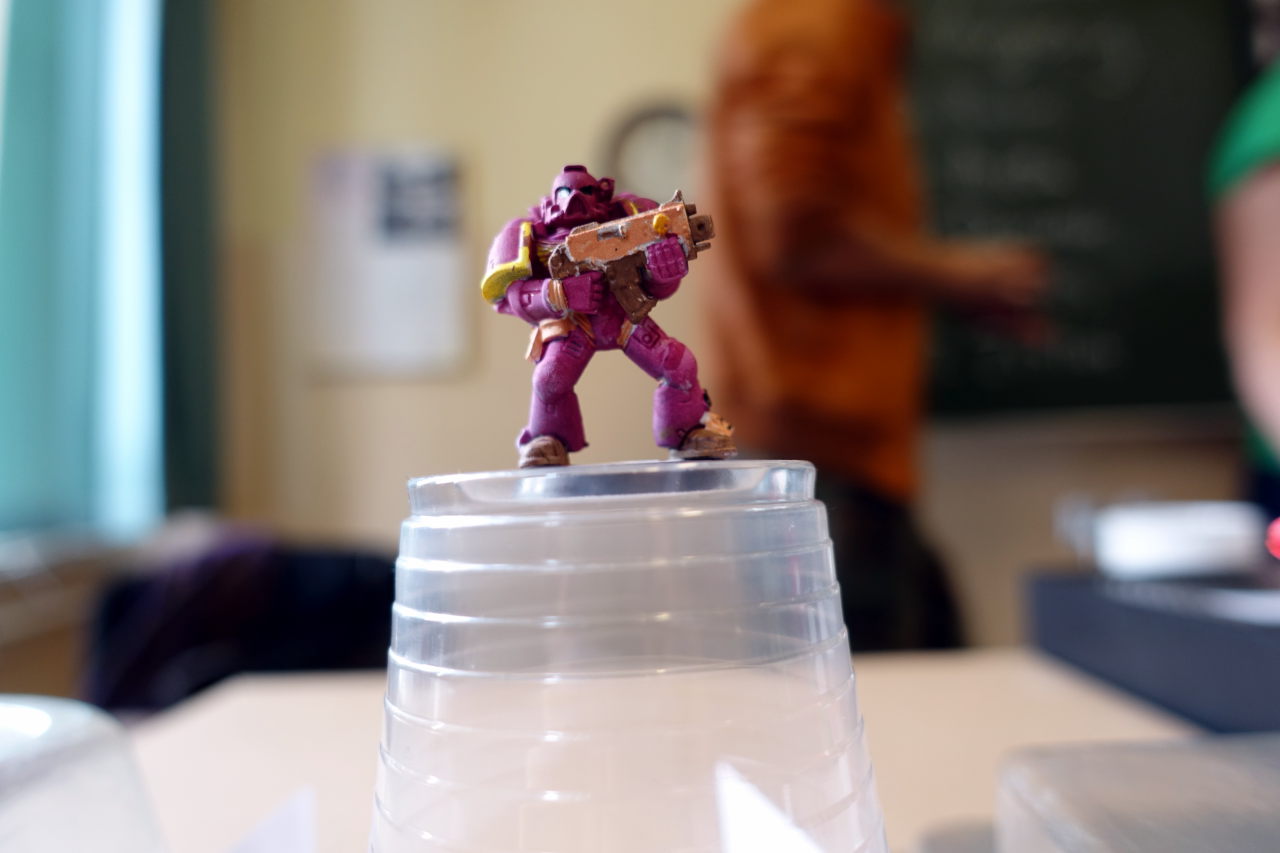 Competitions are quite commonplace during Polish cons and it is popular to have some kind of convention currency. This way organizers allow people to choose their awards instead of deciding what someone should get for a given competition. Of course choice is limited to the awards that the convention can offer, but it surely offers a way greater flexibility and increases the members’ satisfaction. This way, you can collect currency from several competitions, where you landed on lower places, to get one award, but of a greater value. 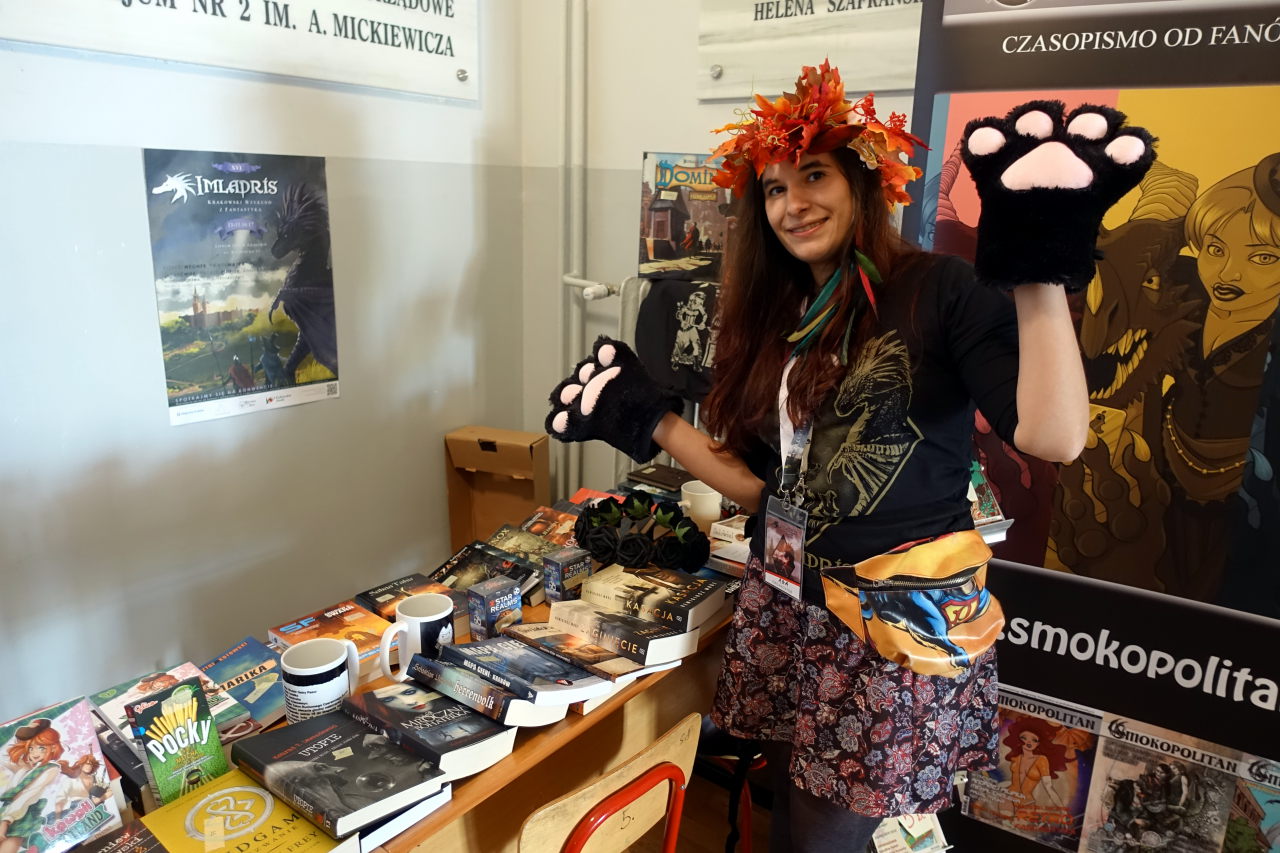 I really need to mention the atmosphere at Imladris. For me it was really, really good. This year I had the time to talk to my friends. I spent an entire hour chatting with Anna Kańtoch – one of the best Polish genre authors. I was also able to do some smoffing with a few of the organizers and I am now slightly more confident about future plans. One thing I regret is that I was too tired to join other members in a convention pub. Usually, pub evenings during Imladris are fun and good to visit but I was too tired :(. On Sunday morning I was told that the previous night involved a lot of glitter. Some of the members were still partially covered in it… 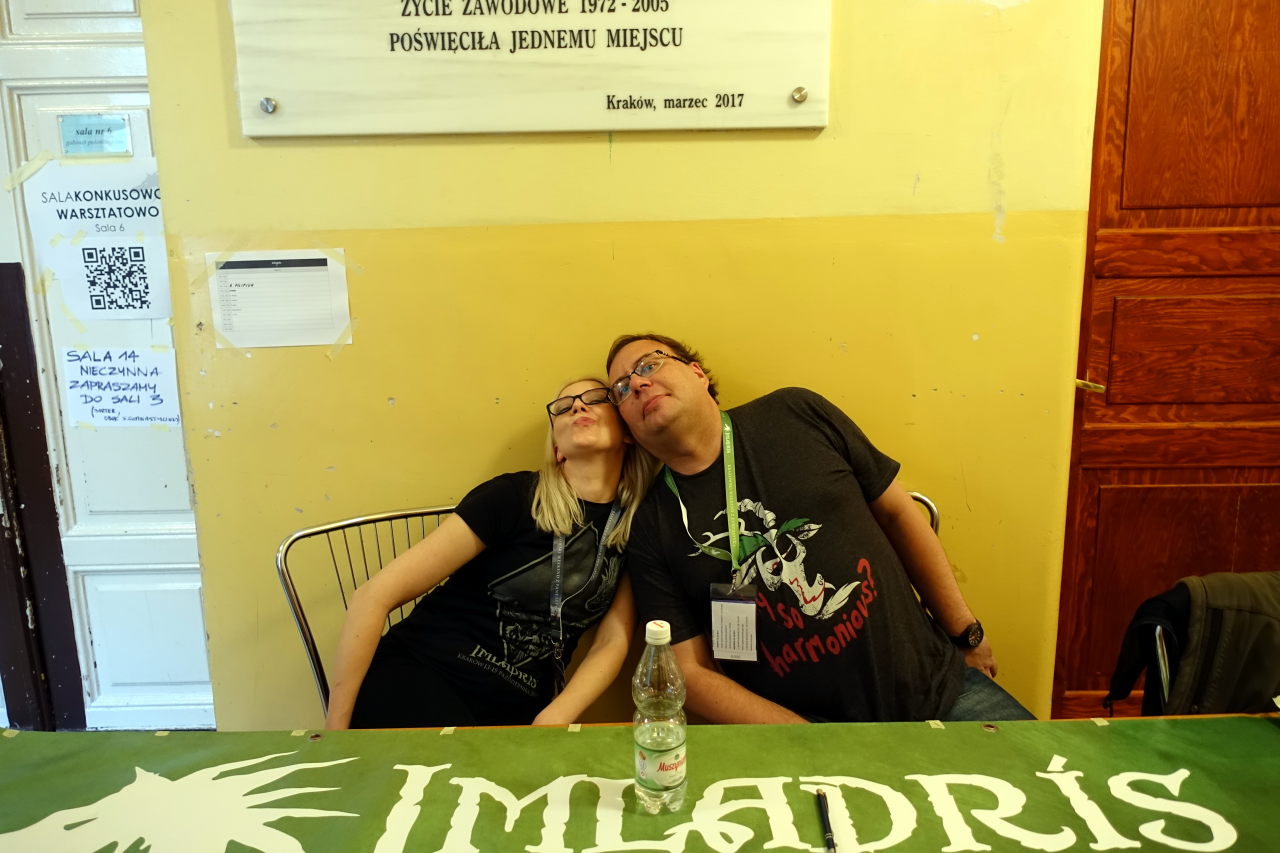 Look how friendly we are!

One thing I found really awesome was the fact that chair of the con gave his team some kind of a “Thank you for your work” gift. All of the organization committee received mugs with the convention graphic art and their name. It is truly a great idea and of course I am slightly jealous 😉

Make it more appealing to the eye

A good side of the con was also its graphic design. I wasn’t a great fan of the previous year’s programme book cover, while this year it was really good. Also, the badges where way better (although the place left for writing your name was too small). Last but not least, t-shirt design was good, but I can say the same about t-shirts from the last few years, so this is simply keeping up the good practice. 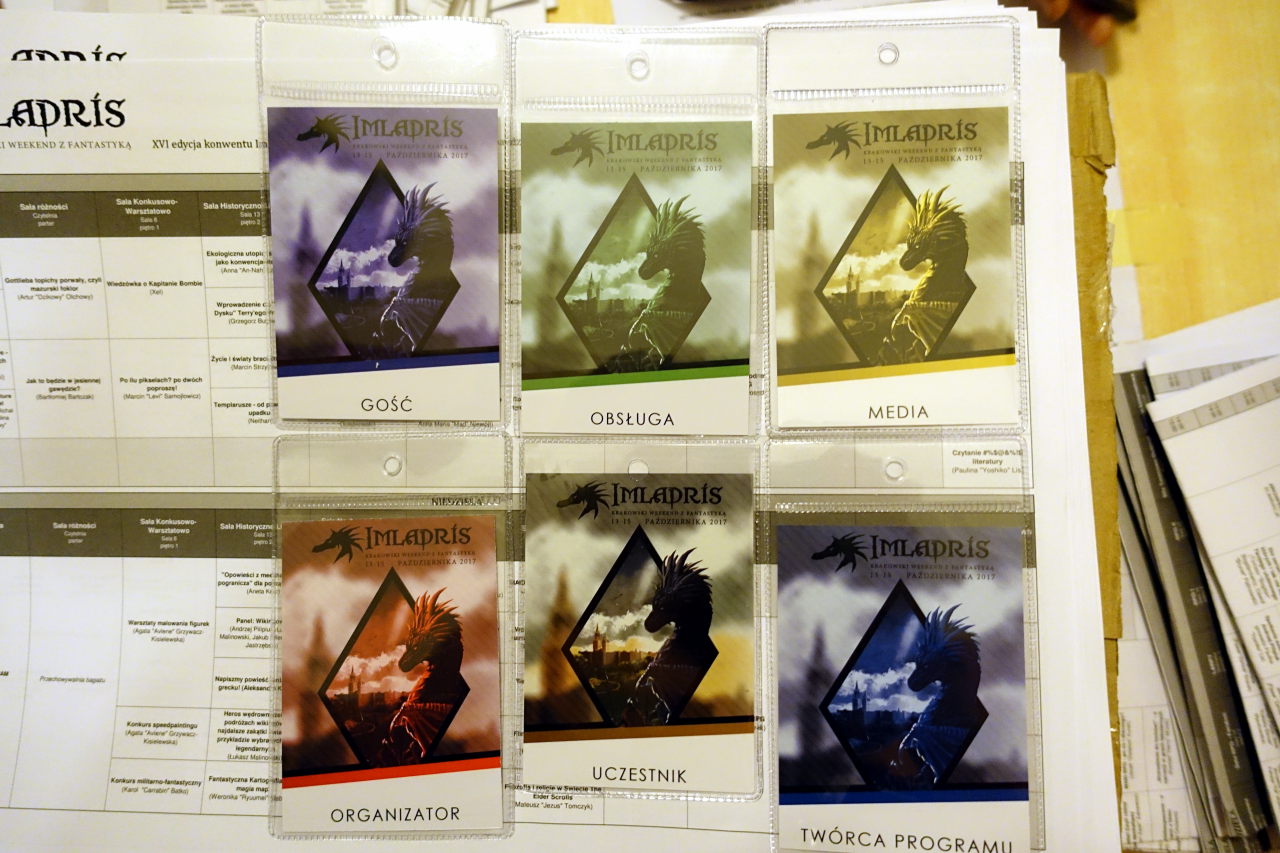 When I am comparing this years’ Imladris to the previous edition, it was way better. I cannot give you one specific reason for my opinion – it was probably the combination of multiple factors, including the fact that I simply had more time to enjoy the convention. Whatever the reason, I came back from Imladris full of energy. I am really tired but also very happy and I already look forward to Imladris XVII, which was officially announced to take place between 12th and 14th October 2018. I hope that the next year’s con will be as good as this year’s event, as the I really enjoyed my weekend there thanks to the efforts of the con team.