I wanted to go to Octocon for a few years, but it was usually held on the same weekend as Imladris in my home city and therefore I didn’t have the chance to visit the Irish national convention until now. Fortunately, this year Octocon and Imladris were not held at the same time so I finally was able to visit the Dublin-based convention.

Before the con, I was slightly surprised by the fact that there were not many members registered. The website lists just 330 members and I supposed there would be more people in attendance. In fact, I prefer smaller conventions so it was a positive surprise. I am not sure how many members there were, as it was possible to buy the memberships at the door. What is important is the fact that the convention was neither empty nor overcrowded – the amount of members was almost perfect.

While walking through the Dublin streets I spotted Octocon posters in one of the bookstores. It was really good to see them there, as I hope that it helps to attract new potential members of fandom. I would like to see the same thing happening in Poland more often – not big billboards (as it happened for Pyrkon) but small posters in libraries and bookshops. 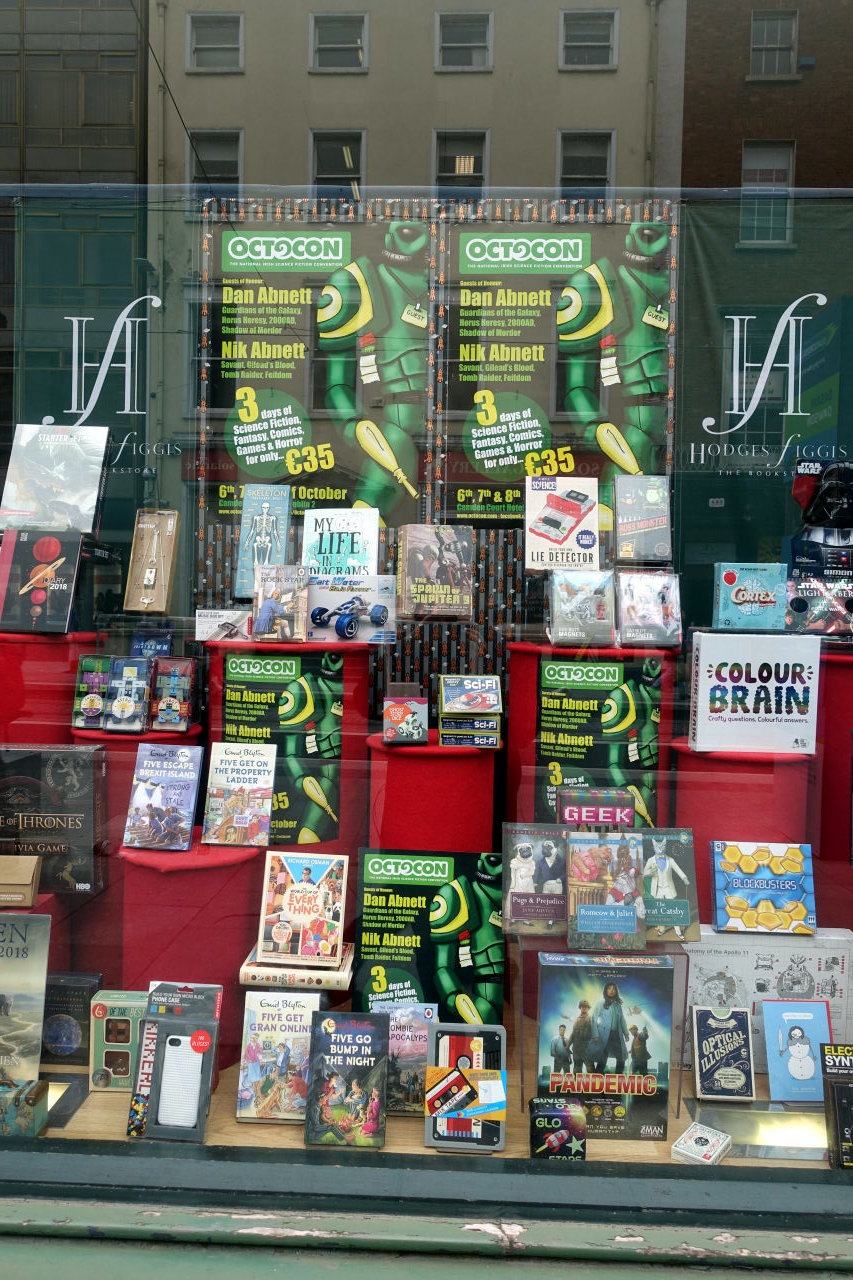 Octocon’s posters in one of the Dublin bookshops

There were four “major” events happening during Octocon. The first and the last ones were very modest opening and closing ceremonies, which lasted for a short time. They were serving a rather informative purpose and didn’t include any performances. On Saturday night there was an Octocon’s Monster Ball. I was able to stay only at the beginning, but it started with some music and dancing. I am not sure how long it lasted. The last one of the major events I participated in was the Golden Blasters film festival. 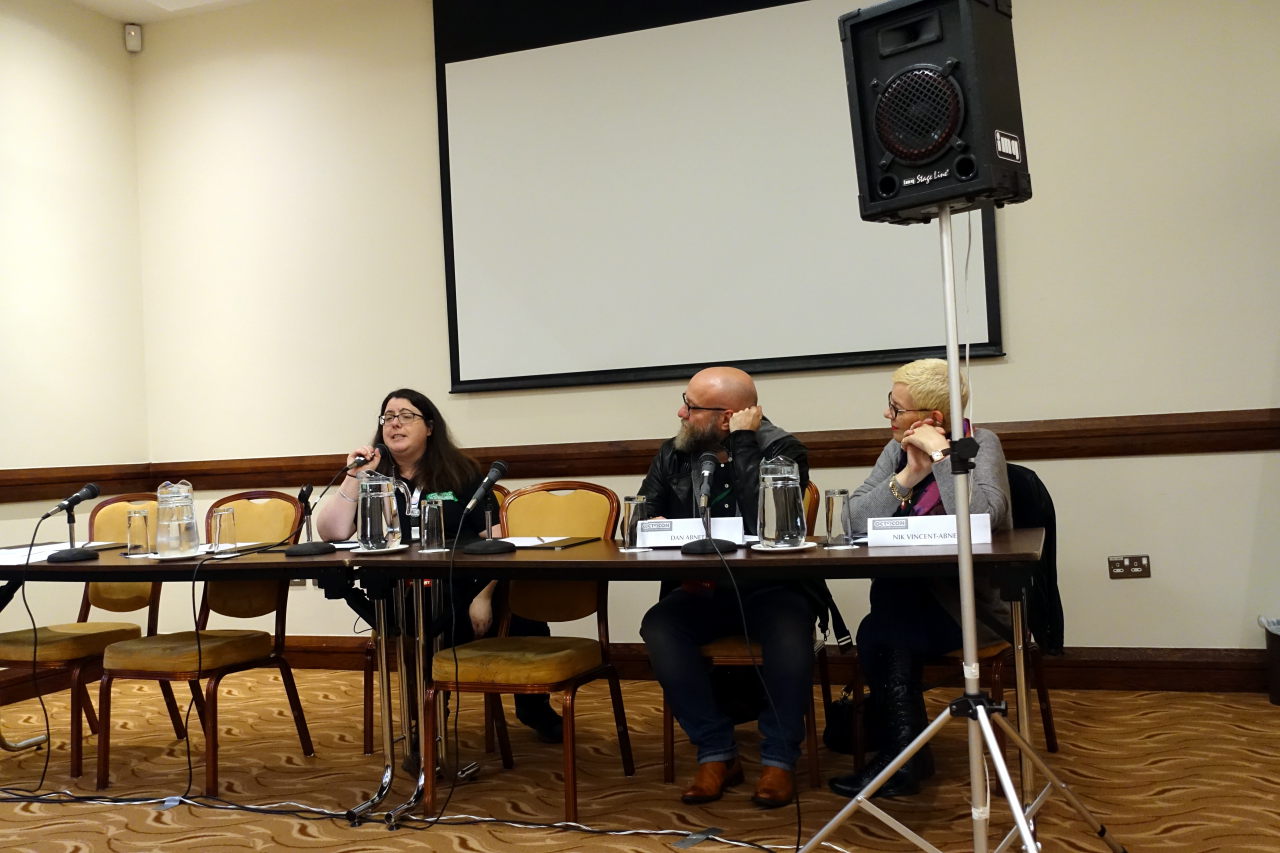 Ever since I heard about Octocon for the first time, I have had the impression that the Golden Blasters are an important part of this convention. It is a short film festival presenting SF/F/H movies from different countries. Although I am not a film person, I wanted to see the festival myself as I wanted to really understand what does it mean to be at Octocon. This year, the festival lasted for around two hours on Sunday. There were eight films shown in total. The jury awarded the Golden Blaster to the best movie and we – the participants – cast our votes for the Silver Blaster. 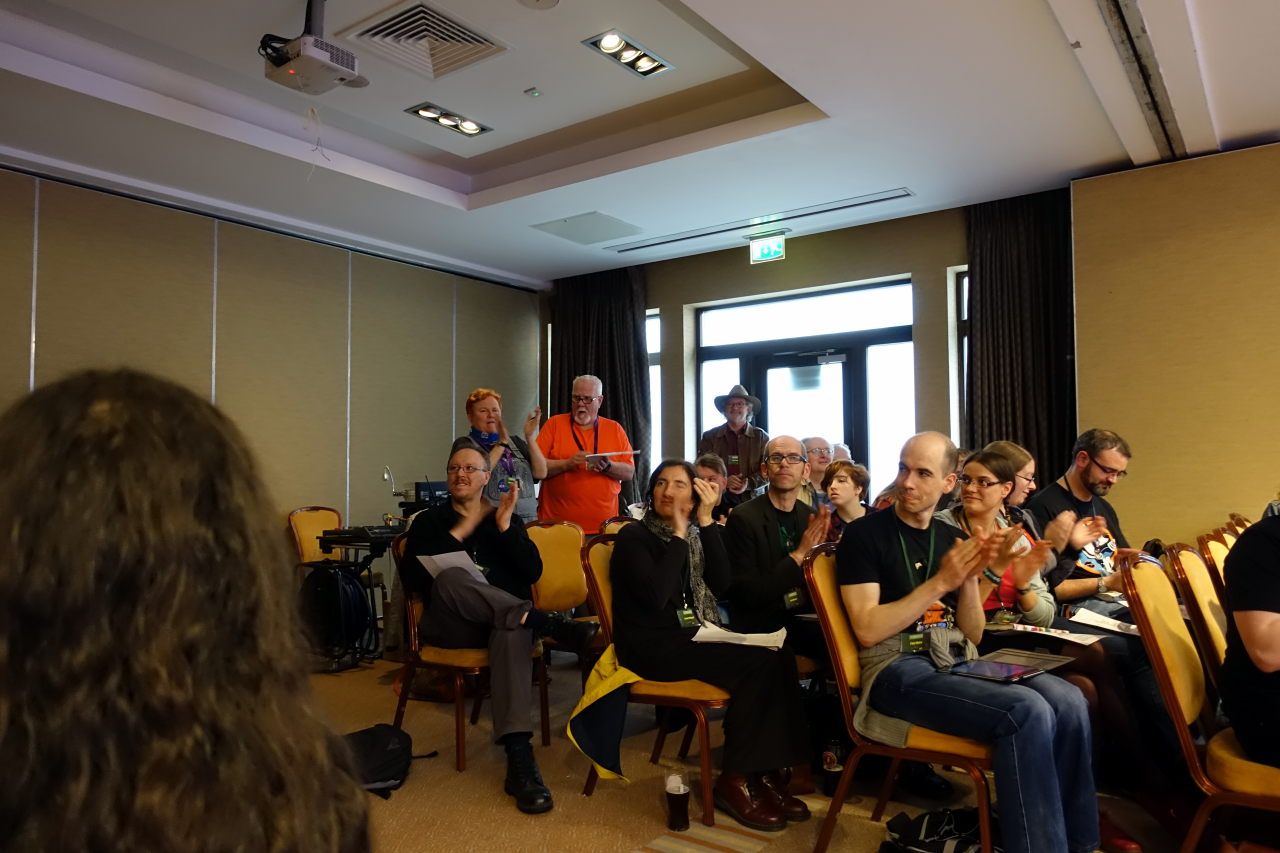 This year both the jury and the audience chose the same film – Einstein-Rosen, written and directed by Olga Osorio from Spain. I must admit that it was my second choice. I preferred the grimmer Biomass written by Robert Jauregui and directed by Larry McKee. Still, both movies were good and I definitely don’t regret that my choice hadn’t won. If I were to choose the third place, it would probably be They’re Made Out Of Meat (writer: Tim Mcgill, director: Jason Housecroft). 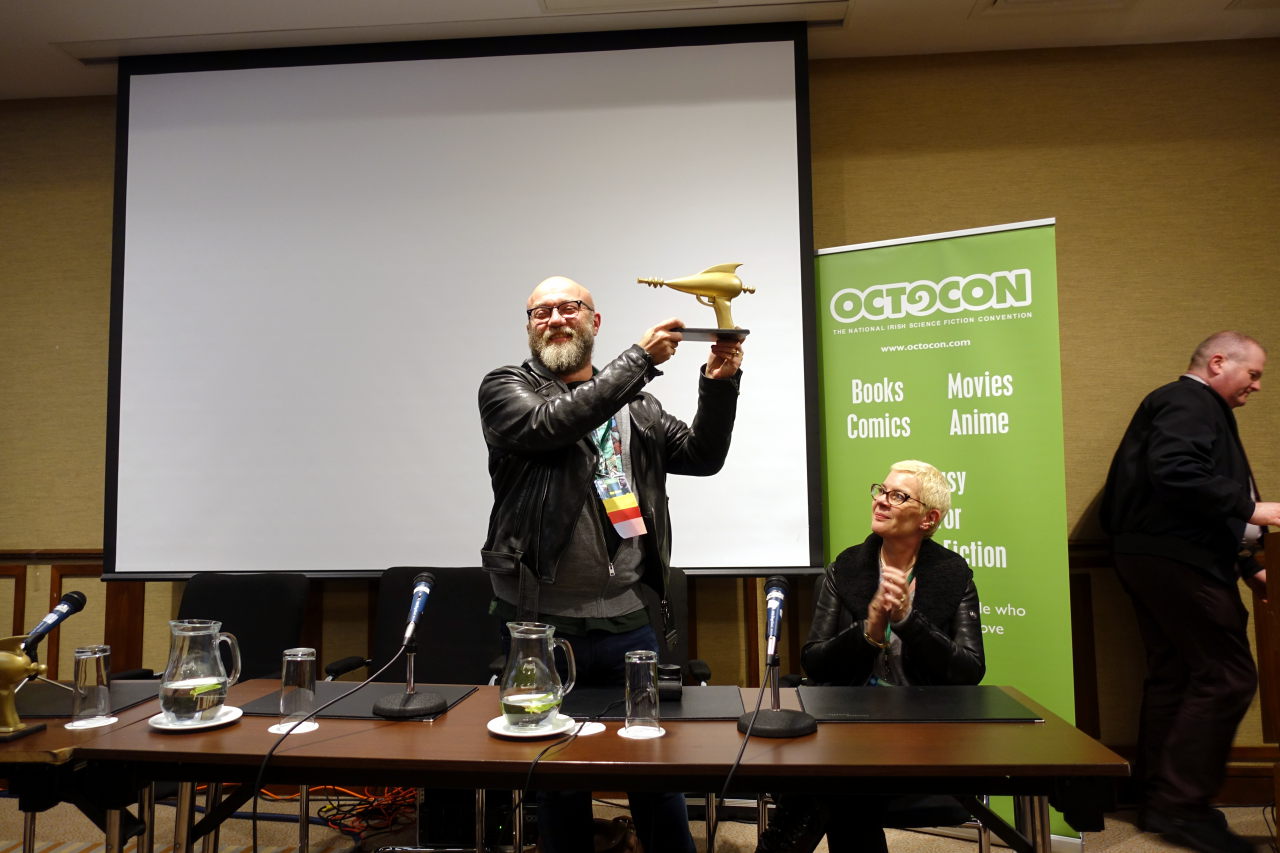 In general, I was happy to see the whole festival. I didn’t like all of the films, but the event was interesting and now I have more appetite for short SF/F movies. If you can recommend any good ones, please let me know in comments.

There was one programme item that tells a lot about Octocon. It was called Ice Breaker and took place just after the opening ceremony. It was a moment to greet first time Octocon members and tell them it is fun to be there and it is fun to start helping next year. The person who took care of this activity gave us some sweets and did her best to make sure we all felt welcome at the con. I would like to see such small things on other conventions – they have the possibility to function as an ice breakers for the fans who are rather on the shy side. 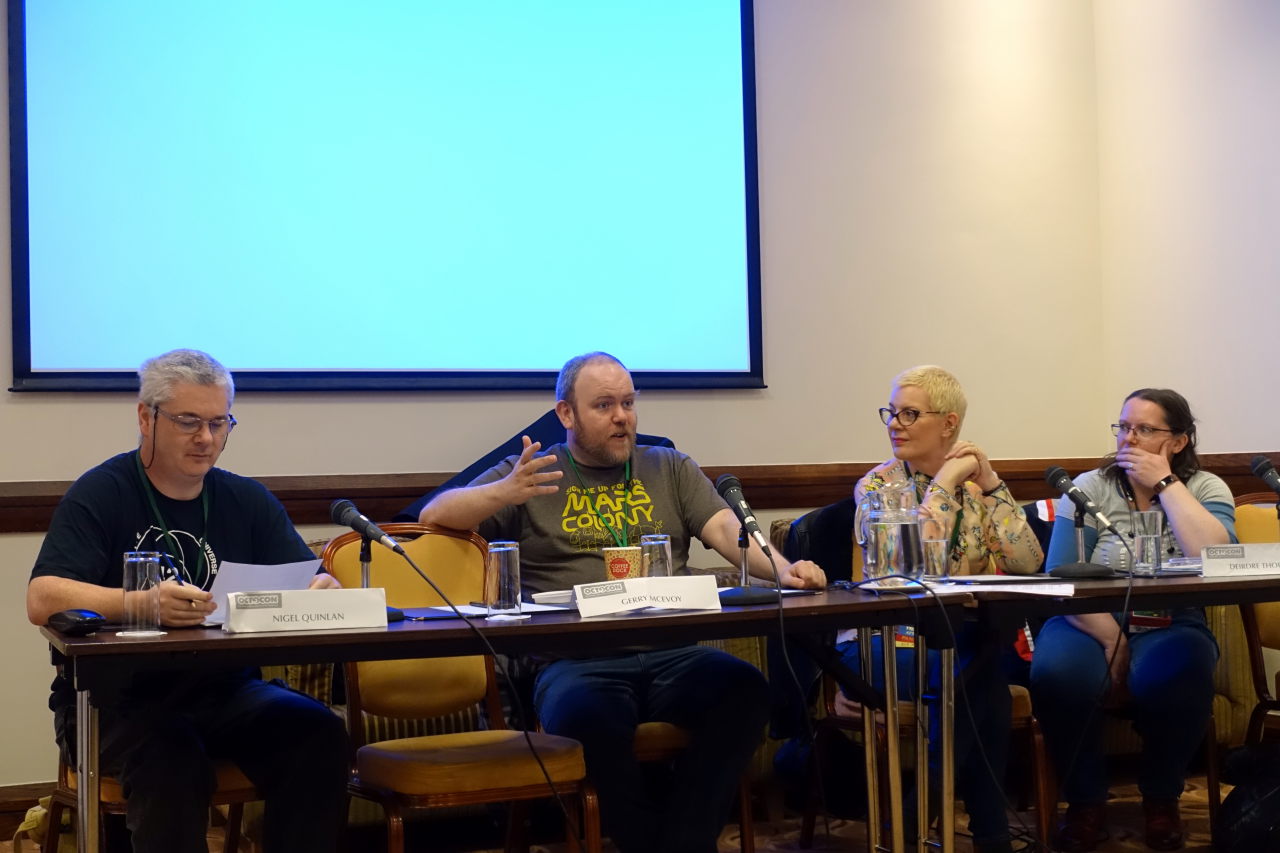 One of the panels with Nik Abnett

As for the rest of the programme, there were some interesting items. I noticed that I kept seeing the same faces on many programme items, which probably shows that my interests are going in certain directions. It was very good to listen to the Future Fashions panel, where I learned a lot about how we can already use technology for the clothes and tattoos which will do more than only cover and beautify our bodies. Also, the panel entitled Physics of Single Biome Worlds was quite interesting.

Other things to do during Octocon

Dealers room was rather small. There was one big bookstore and a few authors/smaller publishers selling their works. C. E. Murphy was treating visitors to excellent cocoa chocolate fudge. I even asked her for a recipe as I want to try making it a home. There was only one fantable – that of the Dublin 2019 Worldcon (I finally bought the lovely t-shirt!). Right next to the Dublin table was a booth of Seal Rescue Ireland – charity partner of Octocon. 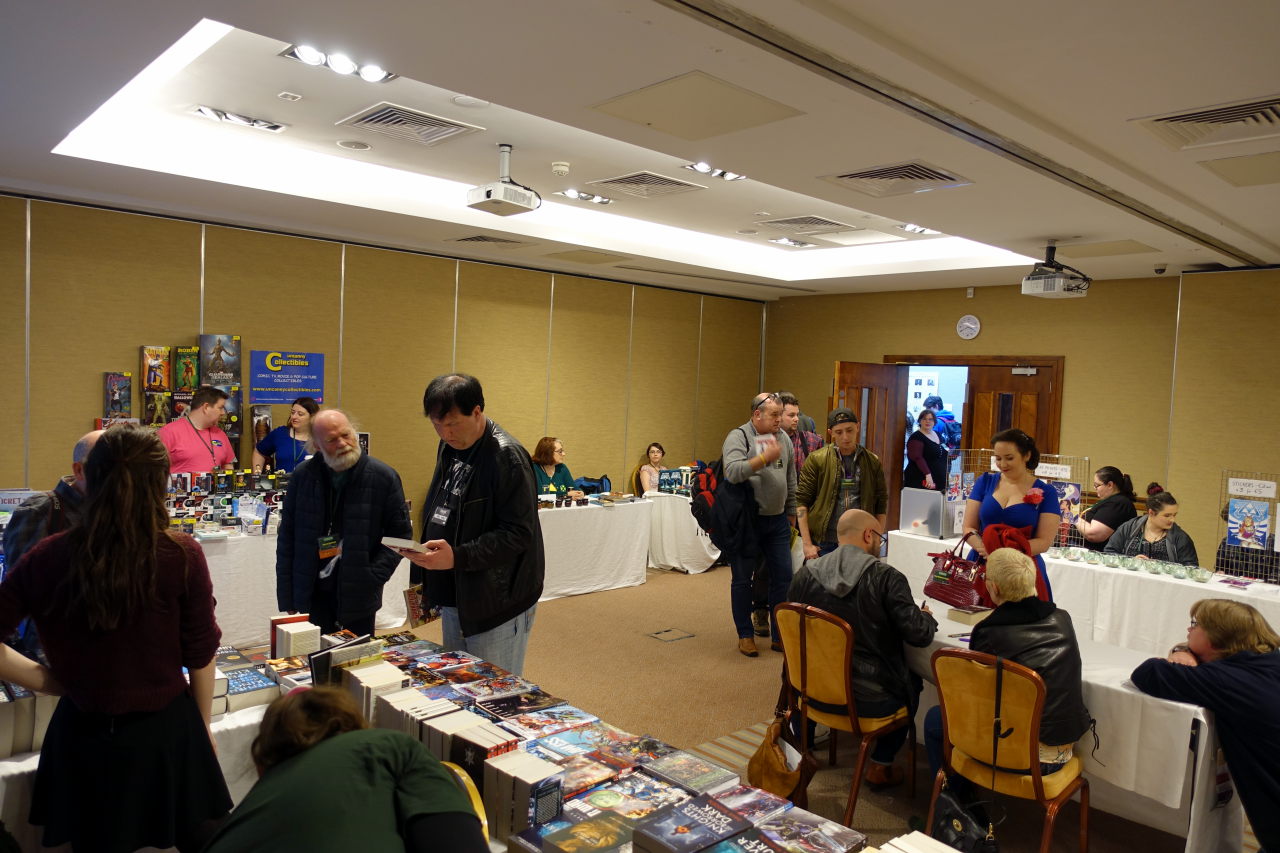 There were not a lot of things for gamers. There was a Dune LARP scheduled, but I didn’t take part in it. Board gamers were able to learn to play some games by Steve Jacksons Games, as there were some fans presenting them. I am not sure if they love the SJG so much or if it was the company who asked them to present the games. For me, it was a good opportunity to learn what types of games are made by the Steve Jacksons Games, apart from Munchkin. 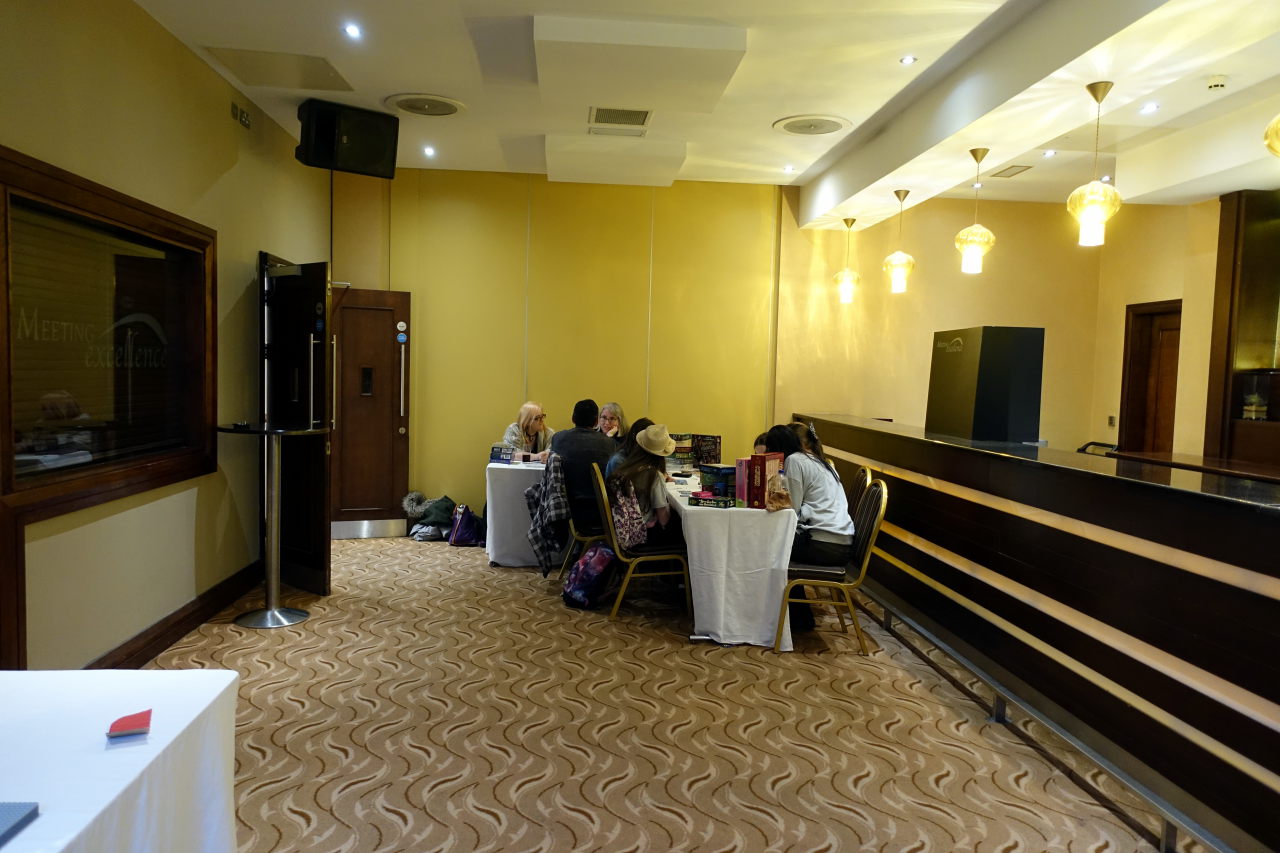 All in all, Octocon was a good convention. I really enjoyed some of the programme items. There was awesome design of the badges, with the small Groot picture. The Golden Blasters film festival is an event I will certainly remember. I hope I will be able to see some more of the nominated works – either from future or from previous editions.