It has been a while since Pyrkon but I have started my GUFF trip just after the convention and therefore I didn’t have time to write about the con before. Now I am trying to recollect my memories and this is not so easy after three weeks I have spent in Australia doing fannish things. There is however one thing that stick to my memory apart from the size of this convention – guests.

There were quite many international guests at Pyrkon this year. When announced some of them made me really happy and some of them I didn’t know before. Still, I believe that the broad variety of guests was a great thing to do and I really admire Pyrkon for organising all of this. Personally, I had the great pleasure to meet and interview two of the writers – Robin Hobb and Patricia Briggs. I was really stressed before interviews but I hope they went quite well. For me, personally, this was a great opportunity to meet these writers and understand them a little bit more.

One of the other guests I really want to mention was Felicia Day. I am really disappointed by my stupidity as I did not attend any programme item where she was participating and this was a mistake. What I managed to do was to ask her for a picture. I was really stressed and I felt quite fanboyish. Usually I do not react this way, but it happened somehow – and probably we all are allowed to behave this way once in a while :). I know Felicia Day from The Guild and I am really happy that in real life she appeared to be just as nice as in the series. 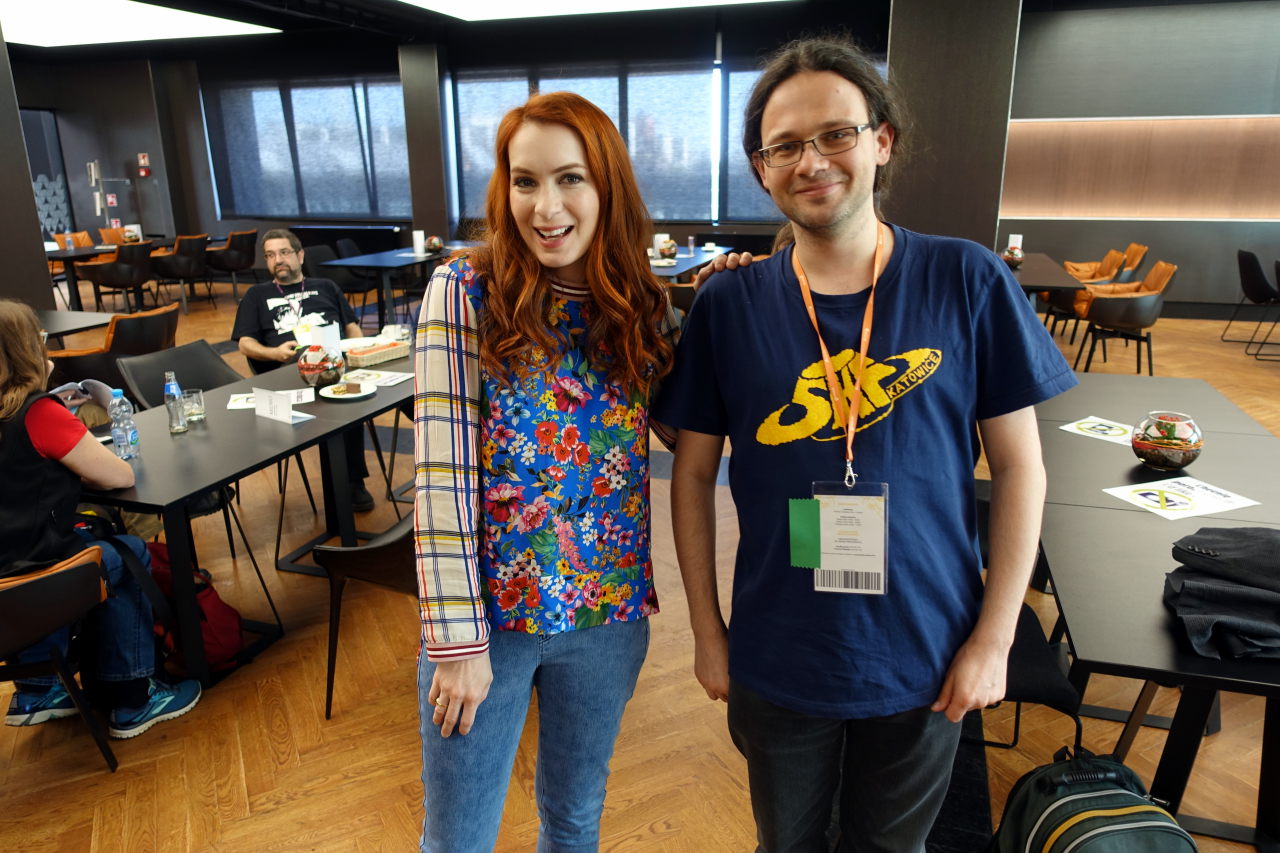 My picture with felicia Day

As for the programme items – this is a difficult part of Pyrkon. Due to the convention size (43 000 members this year) it was really hard to get to the programme items. The queues were enormous and this was really discouraging from even trying to attend a programme item. As I paid my membership before the con I got the chance to reserve a place at four programme items and I did it only for two of them (why oh why did I not reserve a place for an interview with Felicia Day?), but I had to skip one of them as it had been moved to an earlier time spot and I could not make it. So I attended only one item on quantum mechanics. It was quite interesting but not detailed enough, so I was still looking for more. 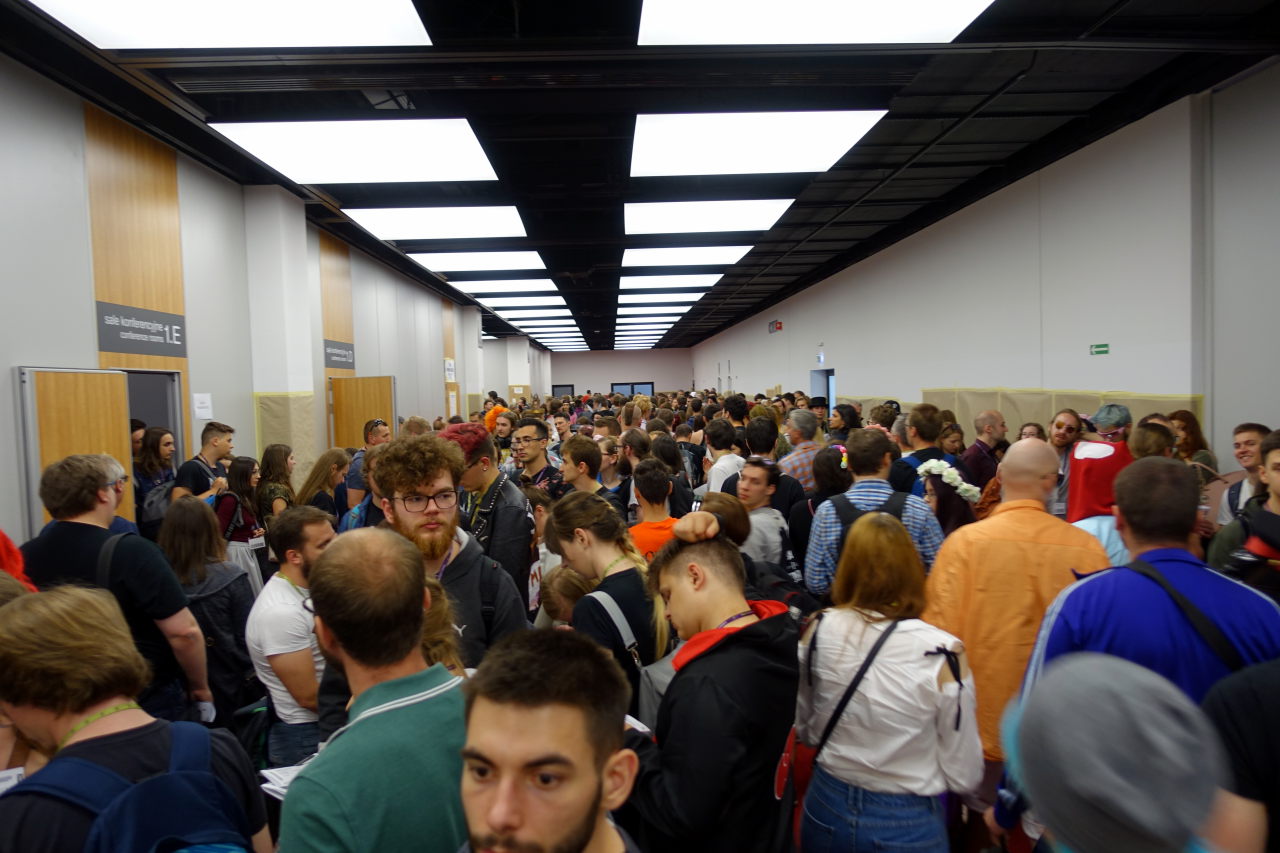 Corridor in front of few programme rooms. It is crowded as new item will start in few minutes.

Truth to be told I attended one more item – I was a moderator of a panel on whether it is still possible to write science fiction. Here I must mention that as a moderator I usually don’t remember a lot after the programme as I am too strongly concentrated on following the discussion and I keep forgetting it after the con. 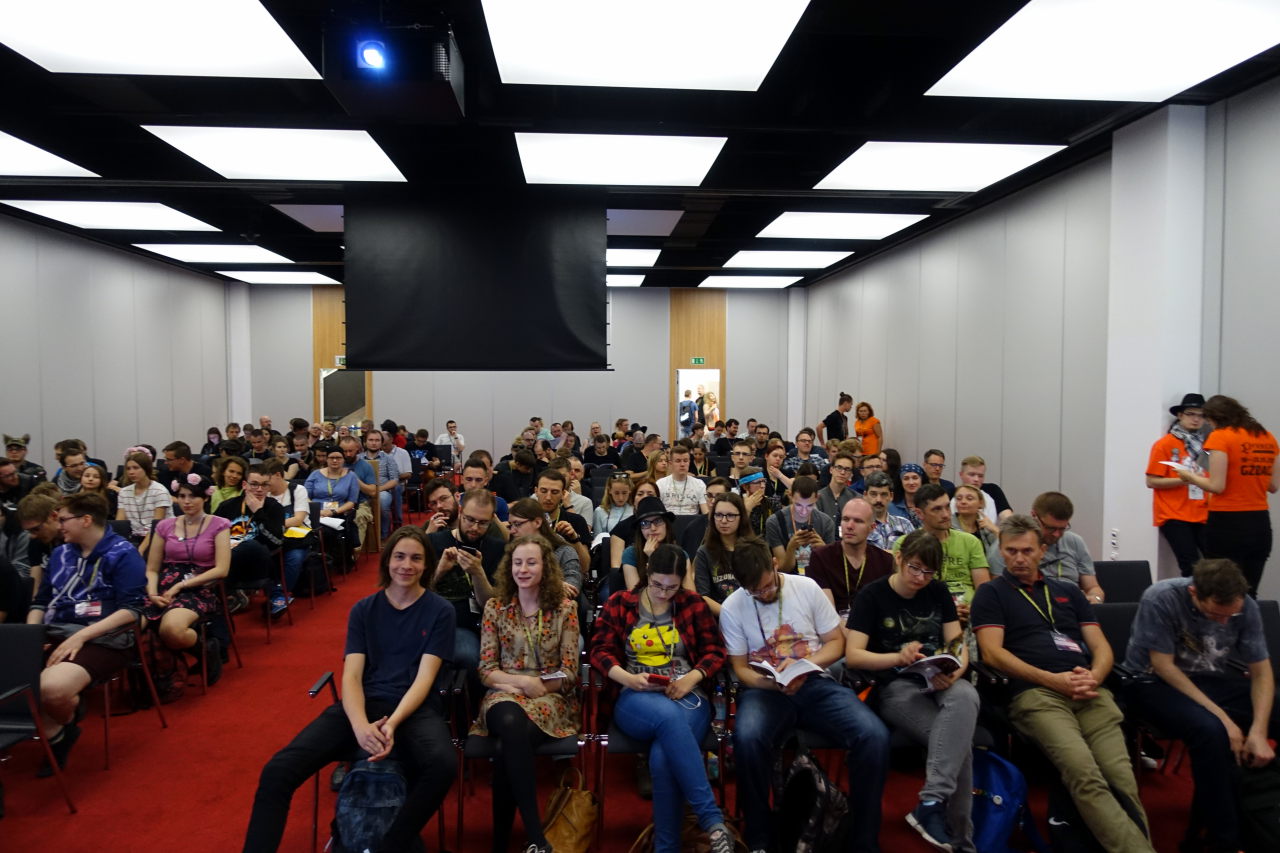 Audience during the panel as visible from moderator’s chair.

I am now browsing through the Pyrkon’s programme and I keep regretting I haven’t attended more of the programme items. It seems there was a lot panels and talks on interesting topics. I want to promise myself that next year I will not make such a mistake, but I know that next year I will probably be quite busy with many things and probably won’t make it to too many items… again!

Large part of the convention I have spent at the Śląski Klub Fantastyki fan table (still others spent more time there). We were promoting conventions and other ŚKF’s activities, but also Dublin 2019 – an Irish Worldcon. I am not sure how successful Worldcon promotion in Poland is, but I do hope every now and then one person will decide to try it.

One of the things I really enjoyed here (but I did not participate myself) was possibility to write a story together with other people. Whoever wanted to join, could write a part of the story following what was already done by other fans. I did not yet have the occasion to read the final story, but I am quite interested. We also recorded the whole project on a camera, so possibly there will be a movie available. After I left the con, two of the literary guests – Robin Hobb and Orson Scott Card came to our table and they also added something from themselves. 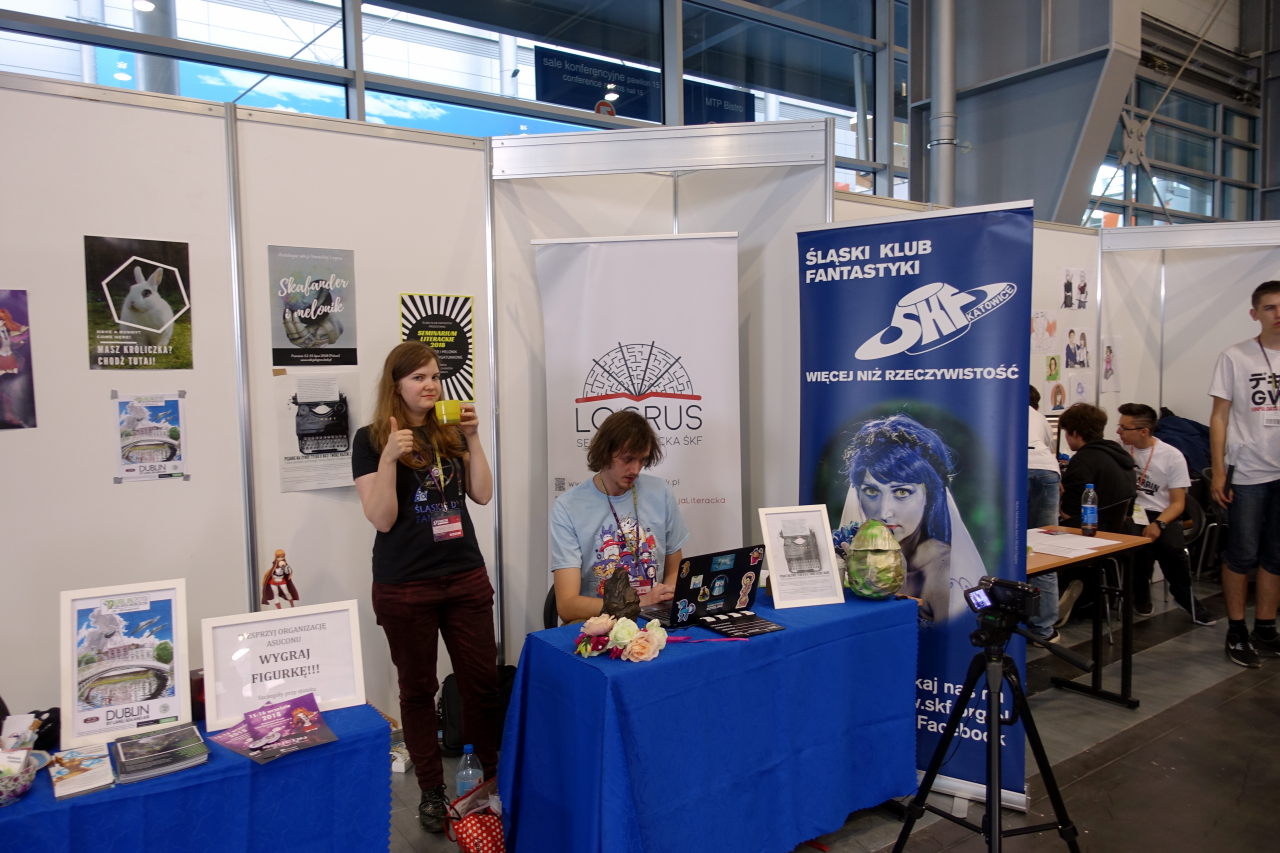 I quite enjoyed my time at Pyrkon. It was really a nice convetnion. I got the chance to meet many friends and also to get to know some more people. I chatted with them a lot and felt this cool convention atmosphere. Even if I didn’t attend enough programme items, I am happy that I visited the con and I am looking forward to going to Poznań next year, in April, for Pyrkon 2019.

My next post will be related to my GUFF trip and should be published on 4th July.