As some of you know I was a GUFF delegate this year and I got the opportunity to visit a convention in Australia. The convention was Continuum 14: Conjugation that was held in Melbourne between 8th and 11th June. It was my first convention on the southern hemisphere and I was really interested in how similar/different it will be compared to all other cons I have visited.

Are we any different?

Continuum was smaller than many conventions I have attended in Poland. I don’t know how many members went to the con but my estimation is around 250 – 300. I really like conventions of all sizes as the size is one of the factors determining what kind of fun I can have at the con. The great advantage of smaller conventions is that you have more time and opportunity to meet other fans. Here this opportunity was boosted even more, as I was a GUFF delegate and I was introduced to a lot of people. I really enjoyed mingling with fans. With some I have just exchanged a few sentences, with others I have spent a lot of time talking and eating. 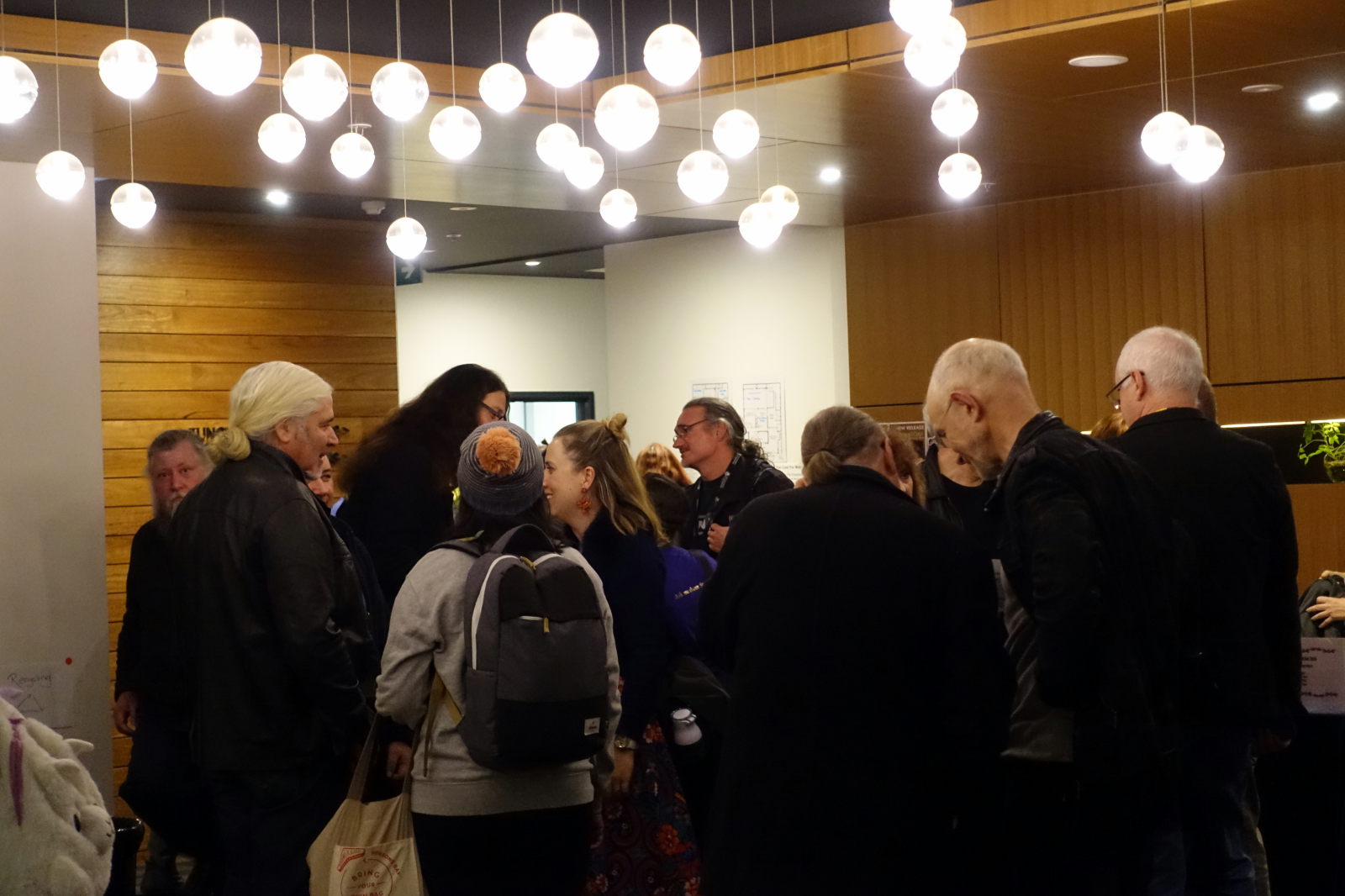 Fans meeting in a “broadend” corridor in the center of the function space.

What was similar to many other cons I am used to was the atmosphere and the general fannish feel. Everyone were really nice and there was this great geeky atmosphere hanging around. When, during interview with me, I was showing pictures from Pyrkon (over 40,000 members), I described them as “people doing strange things”. This comment was perfectly understood by the audience. This type of fannish behaviour is simply common among fans.

How good was the programme?

I was quite busy doing things. Chatting, manning the Fan Fund fantable, participating in the programme items and organizing a tour (please see below). That meant I didn’t get a lot of time to attend programme (if I was not a participant). Still, there were two programme items I really enjoyed. Both were quite informal. The first was a discussion about zines and their publication. Second was a confab about conrunning. Both were rather small and allowed for great discussions. 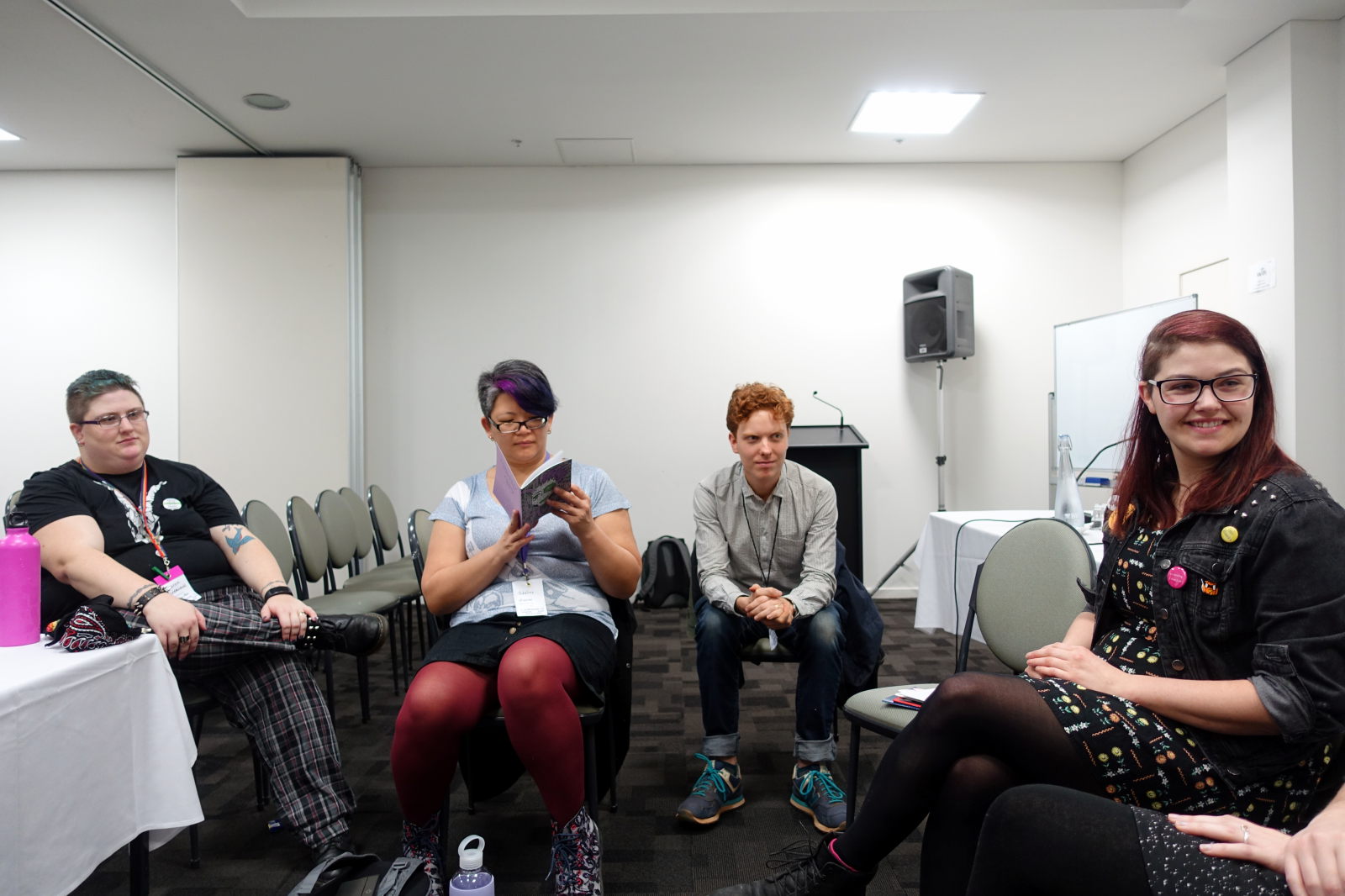 Informal zines panel that changed into general discussion about zines.

As for the programme I did participate in, the first item was an interview with me. That was an extremely strange feeling. You see – I am used to giving talks, moderating panels or even participating in panels. But being interviewed is a totally different thing. I don’t see myself as a “star” who should be interviewed. Yet this form was chosen to allow people to meet the GUFF delegate (that happened to be myself). I am really thankful to Kat, who was the interviewer, as she made this experience easier for me. Now I know I spent too much time looking at the microphone but later I realised that and I started to look at the audience. 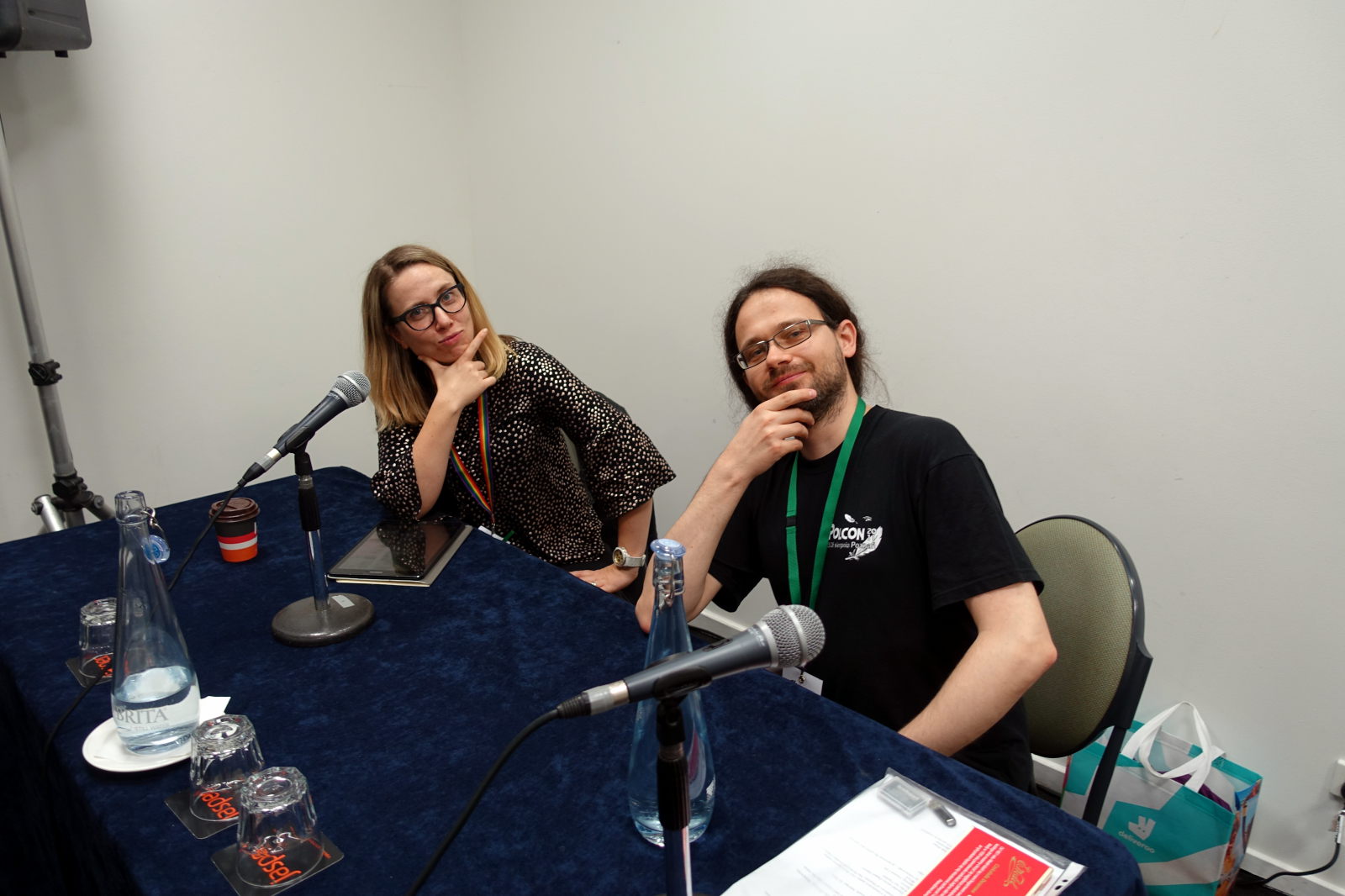 Kat and myself posing for the picture before my interview.

I was also a member of a panel – Legacy of le Guin. I am not sure how well I contributed to the panel as there were some others participants with deeper expertise, but I hope that my fannish voice added some value to the discussion. On Monday I ran an additional item devoted to European fandom. There were just three other people in the room but I hope it was interesting for them.

One of my duties now is to raise the money for the future GUFF delegates so that they can enjoy their trips. Continuum was a good opportunity to start. Thanks to Donna we had a fantable with a lot of stuff that was donated for this purpose. Secondly, we had a Fan Fund auction that lasted two hours. It was different than the one I saw in the UK. It was way faster and more items were auctioned. One thing was similar, though – I couldn’t understand what determined why people were bidding for certain items and not the others. All in all (as I was told) the fundraising went pretty well. 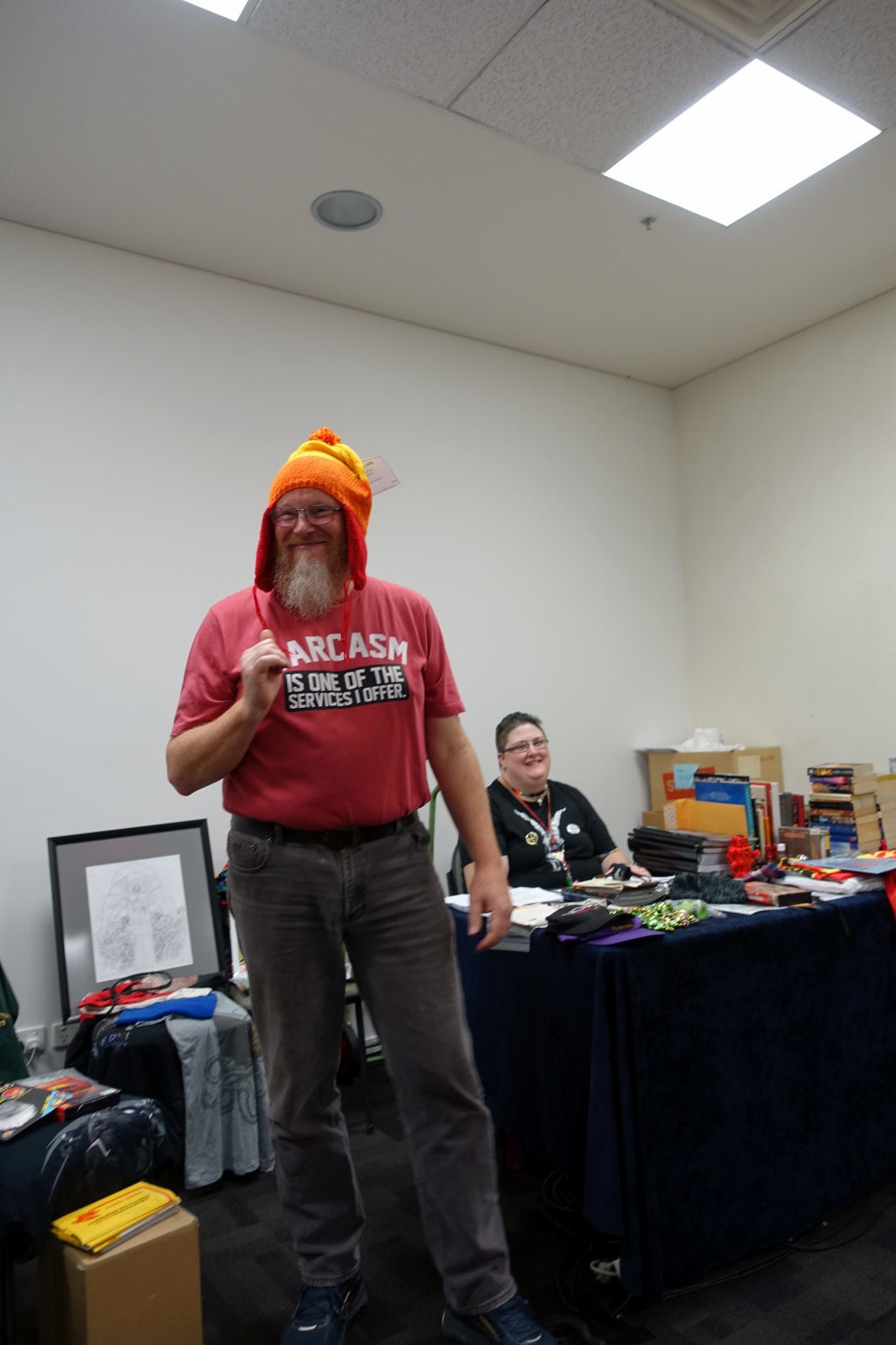 The day before the convention I spent at Trudi Canavan’s place and we talked about many things, including chocolate places. She recommended that I visit Koko Black and gave me a map showing where I could find the nearest one to the convention. The map also showed other chocolate places and I got an idea…

… an idea to invite other fans for a chocolate tour! 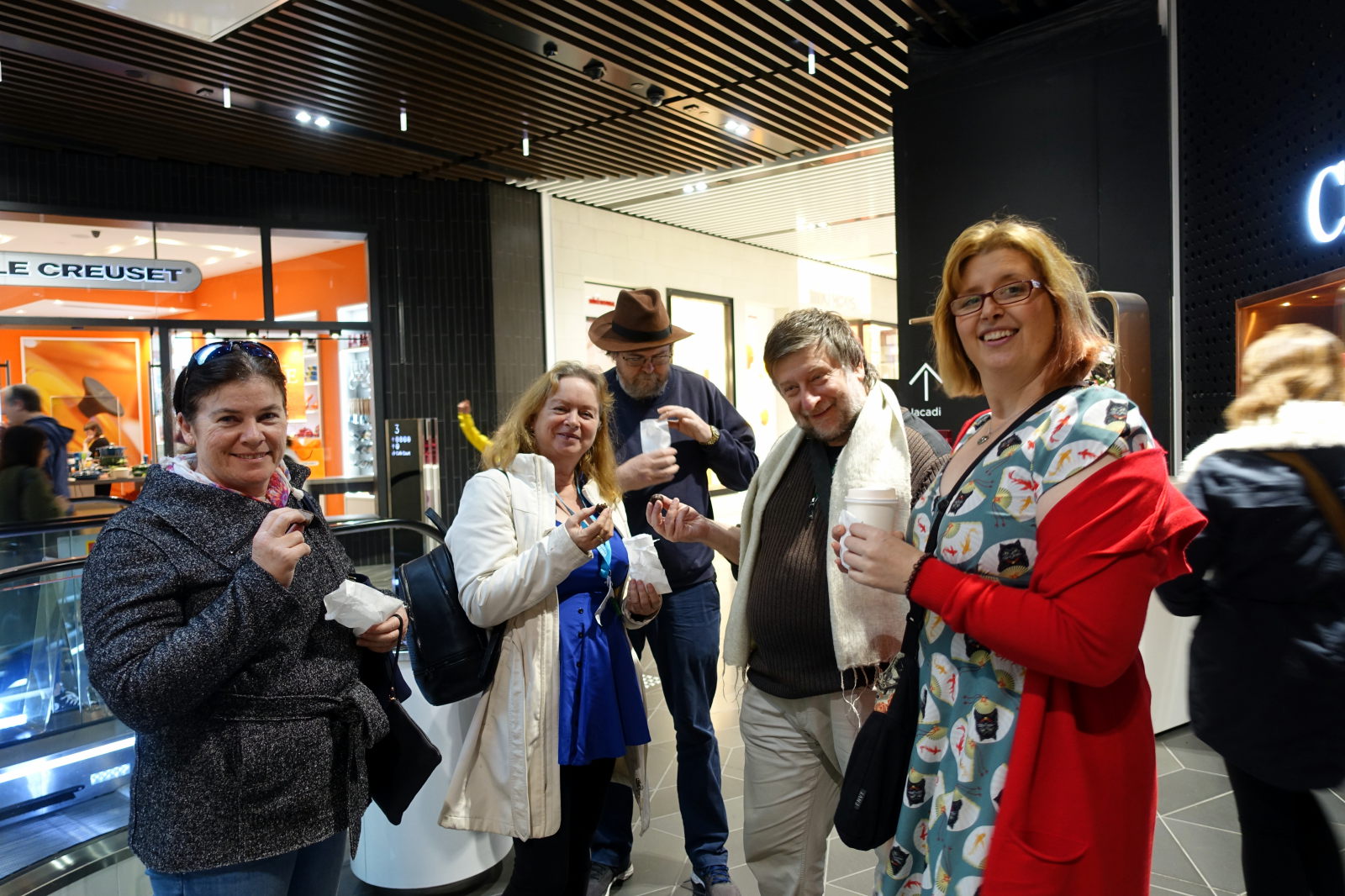 The Great GUFF Chocolate Tour – five fans who went with me to taste the chocolates of Melbourne.

We planned the tour for Sunday afternoon and including myself there were six of us. Enough to have some conversations (about chocolate and fandom) but not too many so everything was quite easy. Over a period of two hours, we visited five different chocolate shops/cafes. It was a great experience but I did not manage to eat anything in last two places – so I made some purchases for the days to come.

We have only one planet

I was positively surprised with Continuum’s efforts to minimize the negative impact of the convention on the planet. At the same time I am ashamed I did not take the proper steps myself. The con decided that printed programme will be available on demand instead of being given to everyone. Also badges were designed in an environment friendly way. The entire badges were easily recyclable and did not contain any plastic parts. Members were also asked to bring their own lanyards, etc. I am thinking of introducing a similar approach on some of the future cons I will be chairing. 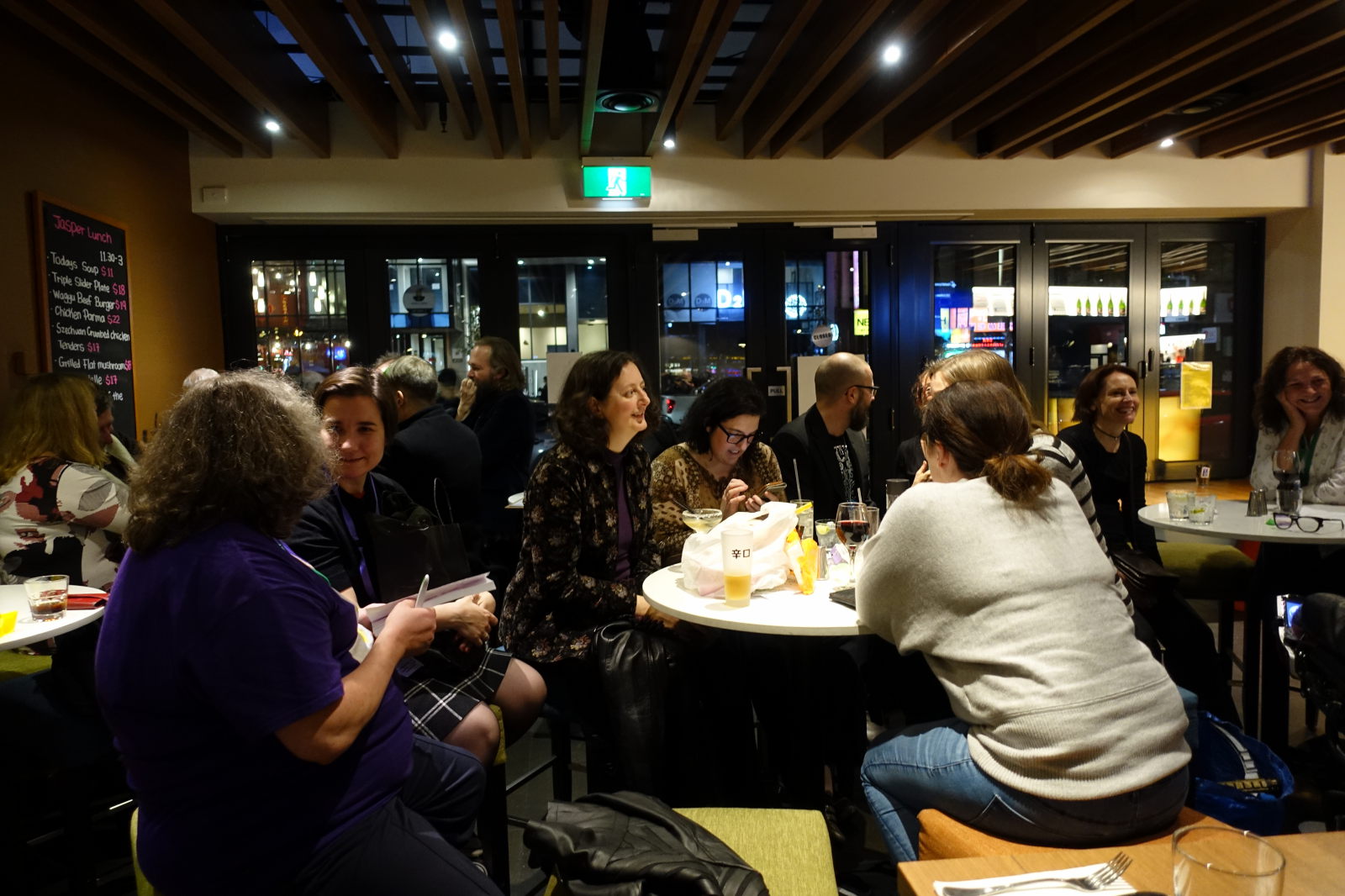 Hotel Bar in the evening.

I really enjoyed Continuum. It was an interesting event with some good programme (and some programme I wanted but didn’t manage to attend) and great people. Far be it from me to say that I now understand the Australian way of doing conventions, but at least I know a little bit about it. The thing I regret the most is that I won’t be able to visit the next Continuum, but maybe one day in the future…

My next post will treat about my GUFF trip. It will be published on 11th July.