I am back from my GUFF trip and it was such a great adventure. I kept writing my trip report while I was in Australia and New Zealand and it is so far around 25 pages long. Keep your fingers crossed as I should be able to publish it later this year or prepare it for Ytterbium next April. Anyway, I think some of you may be interested in what happened and here I want to describe the trip a little bit, hoping you still would be waiting for the report.

I think that the most important, but at the same time most precious memories are those related to people. Do not understand me wrong – I loved the views, enjoyed cute animals and was delighted by some sweets. Yet it was people who made this time such an awesome experience. Before the trip I knew almost no one in Australia or New Zealand. I met few people before but most of them I did not know really well. Yet despite this fact with the big help from Donna, I managed to find fans who were kind enough to host me in each of the cities I wanted to visit. 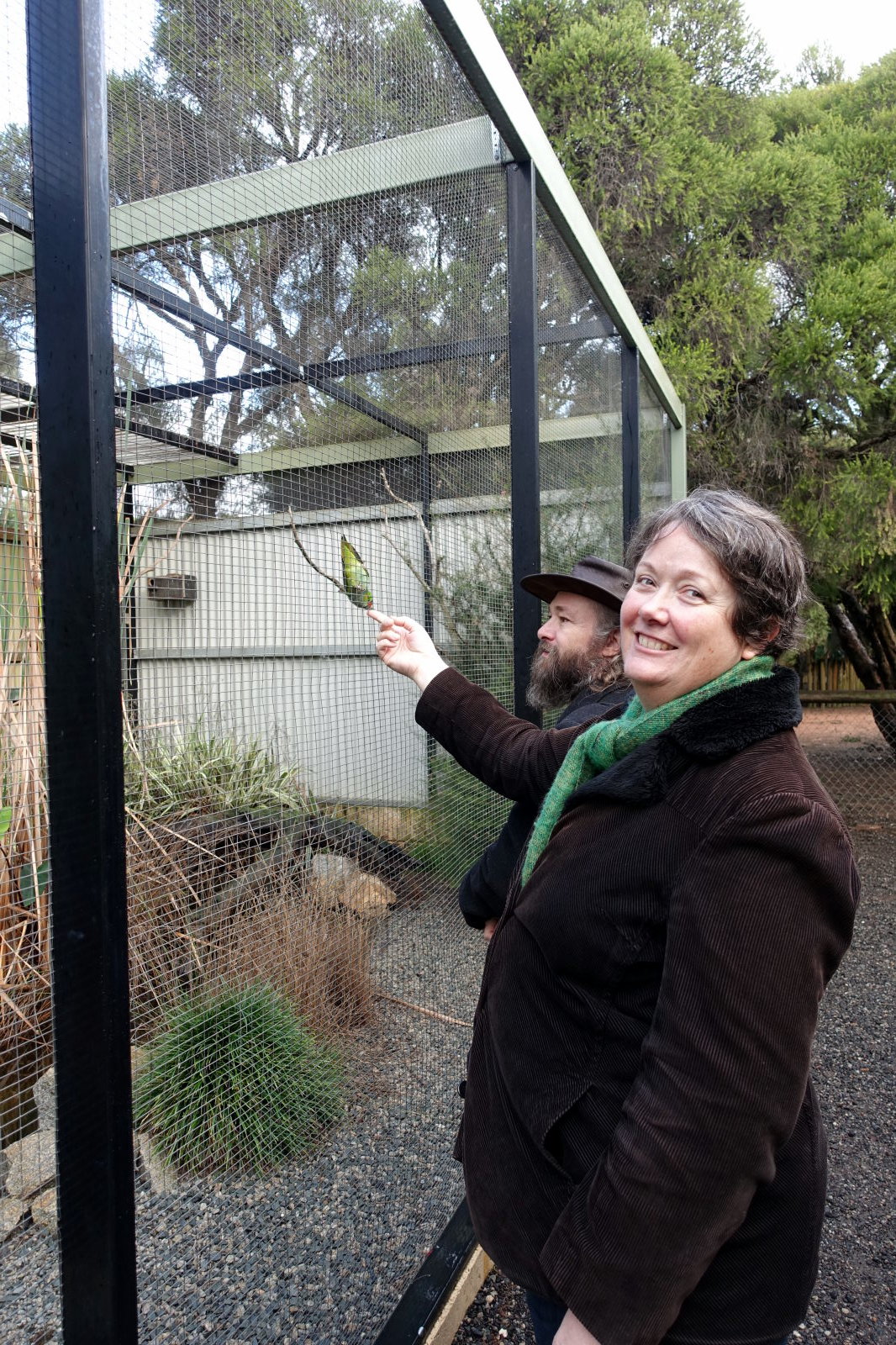 Karen and David were hosting me in Perth. Here we were in Caversham Wildlife Park.

I had some discussions with each of my hosts. We covered different topics; from books, through fandom and up to Polish pronunciation. They not only hosted me but also shared their time with me; sometimes more and sometimes less but each and every one of them gave me some time. So here I would like to thank all of them – Karen, David, Norman, Nick, Adrian, Gale, Ken, Trudi, Paul, Lucy and Julian. You were my hosts and my guides, and you are my friends.

But people who hosted me also helped me to meet other fans. In some cases those were bigger events and in other meetings with one or two people. We chatted, travelled around the cities and ate together. How should I describe it? It was like normal life but condensed. Usually I am meeting people around the year. In most cases these are just short meetings like a chat during a con. This way I get to know people all the time. Yet here I met all of you in such a short time and we had longer conversations. It was like condensing a year or two years of making new friendships in a little bit more than three weeks. A magical experience I treasure. 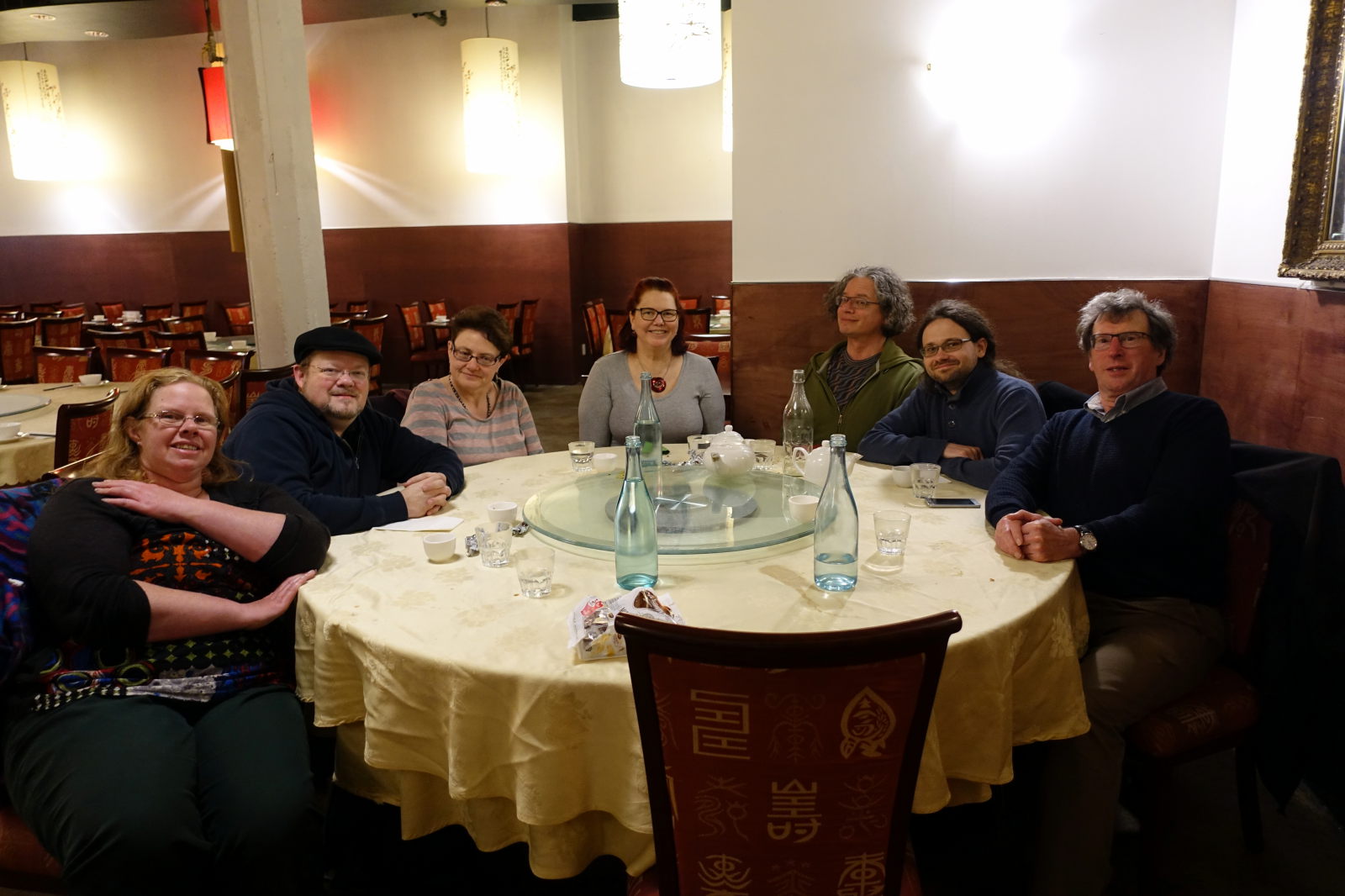 I also want to thank people who were not my hosts but who offered their time to show me around. It was lovely to meet you. So special thanks go to Glenda, Ross, Lynelle, Simon, Marilyn, Lewis, Gillian, Donna, Phil, Elizabeth, Wendy and Irwin. And last but not least I want to thank all the other fans I have met and had the chance to chat with.

I regret I had so limited time. I would love to spend many more days there. And now I want to go back. I want to exchange more opinions and eat chocolate together again. I know that some of you I will meet in Dublin and I am already looking forward to it. Lastly I hope that maybe some of you will visit Poland, so I can show you my country and Polish conventions. 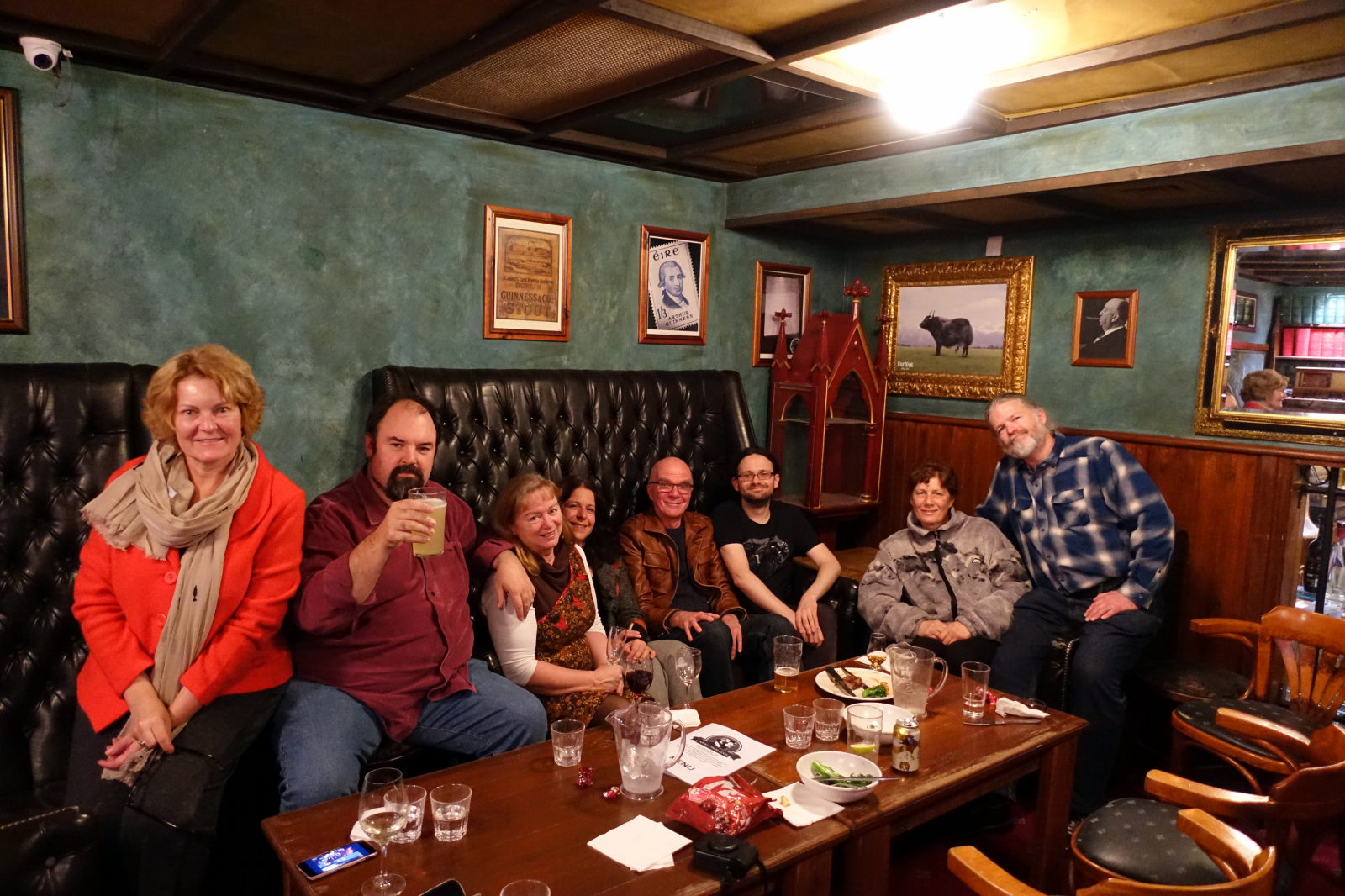 I spent my first evening in Canberra with Canberra Speculative Fiction Group and my hosts Gale and Ken (at the right end of the picture).

So I covered partially the social part of my trip. Previous paragraphs are just the tip of an iceberg but the post is not long enough to describe everything. Now it is the time to talk about things I have been doing. I already posted about Continuum convention I have attended. But this was one of the last things I did. And before?

Before the convention (and also after it) I was sightseeing. I wanted to visit some of the “geeky” places in all the cities. In most places I was able to visit some interesting shops. For example, being in SF bookshops where I met more fans. In those places I was able to exchange few words and talk about GUFF. There were also comic shops or pop culture shops with comics and great assortment of figures, keychains etc. Here I was more anonymous, I was just looking and inhaling the atmosphere. Well, in fact I was also crying deep inside that I do not have space in my suitcase to buy at least few of the things I would love to buy. Lastly there were also some games shops. The most notable one was in Sydney. The ground floor was not really interesting, but the first floor was so full of all kind of RPGs that I was astounded. 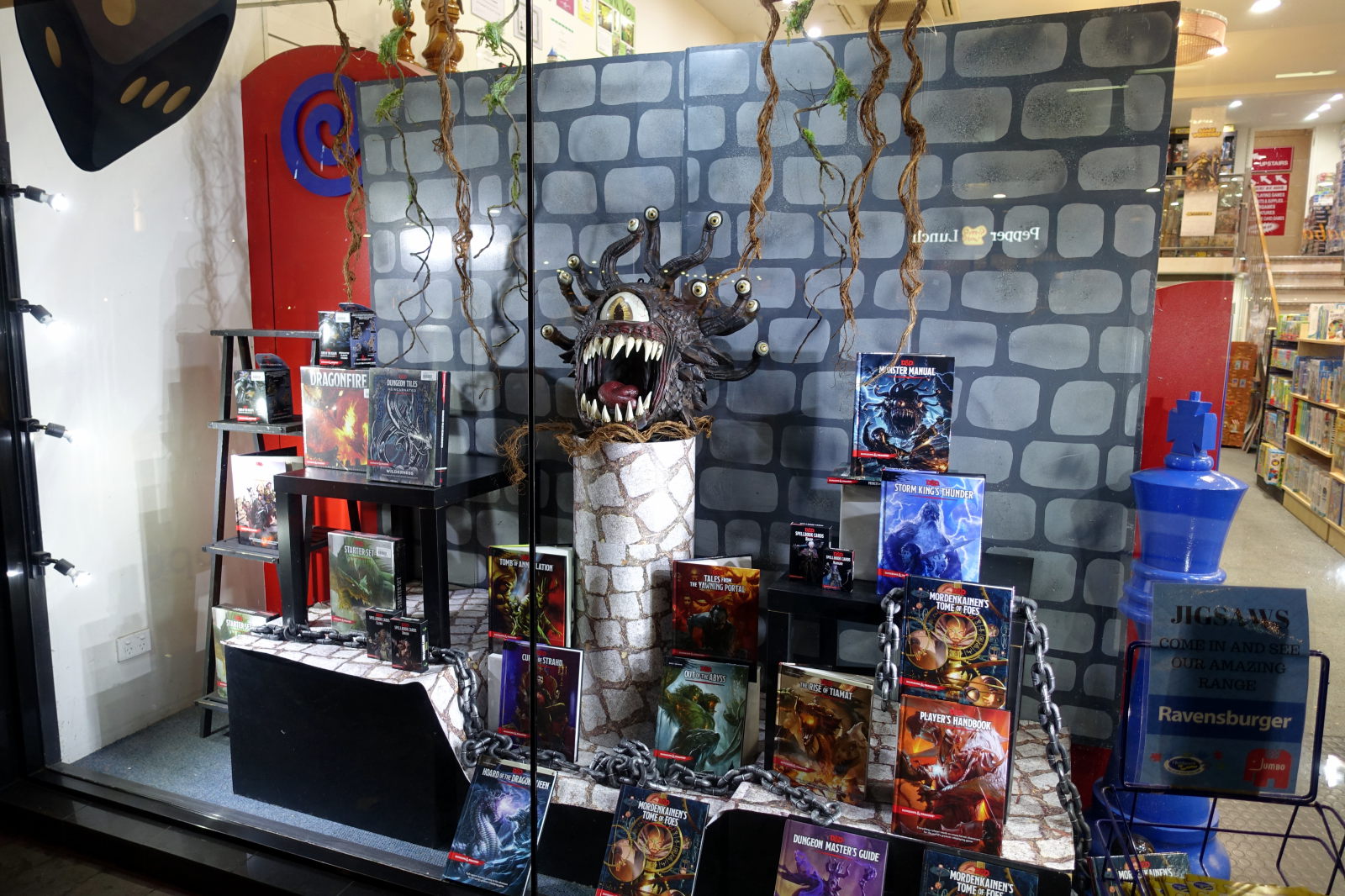 Display window of a gaming shop in Canberra.

One place to rule them all

The shops were awesome but there was something better. In Wellington I have visited Weta workshop. And here I must admit; I am not the “movie person”. Yes I do watch some movies or TV series from time to time but I do not do this too often. And Weta Workshop is almost exclusively for film industry fans. Yet it was really a terrific experience.

There are three parts of it. First one is available for free. It is a Weta cave; shop coupled with small museum (one room) and a film about Weta. I spent here over an hour. I know, shops are not usually so interesting but here… The amount of beautiful figures and copies of props from the movies. So many things from The Hobbit and The Lord of the Rings. How can I not enjoy it? Or the more important question is: how did I manage to not buy anything for myself (again the baggage problem :(). 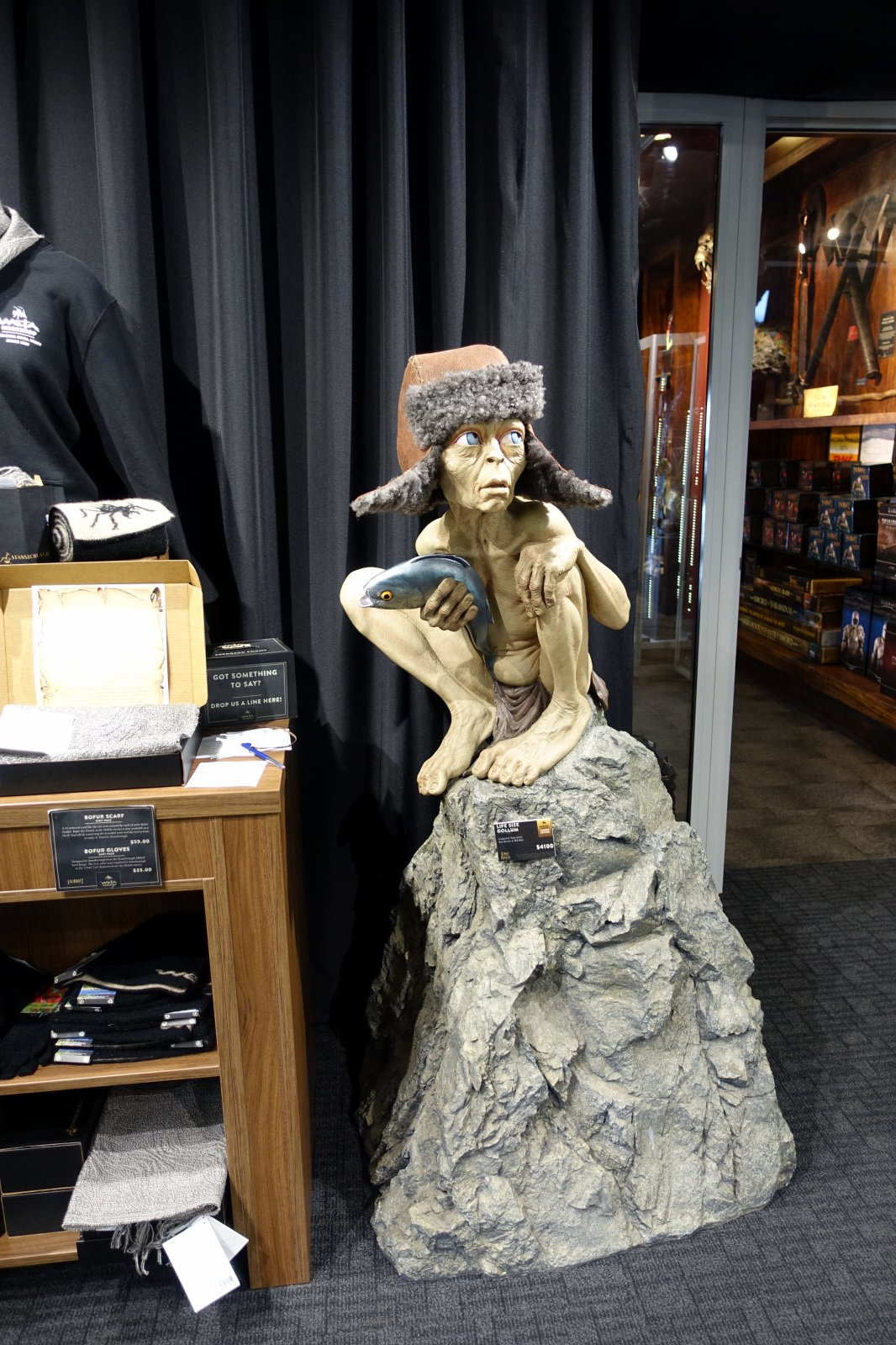 The shop, however, was just the beginning. After seeing the Weta cave, I headed for the tours. From the first one I have almost no pictures. We were going into the Weta workshop where we were able to see real film props. That was amazing and I regret I do not have pictures. Yet this makes my memories even more precious (my precioussss…). Things on the tour included some small props as well as a whole car (from the movie that in the end was never filmed…). Here I learned a lot about making props for the films. Some cool technologies and ways to connect “traditional” and “new” approach towards making the staff actors will be using.

The second tour was called Miniatures Stage Tour: Thunderbirds Are Go. I have not seen original Thunderbirds neither did I see the reboot done by Weta. I was not sure what to expect; and again I was amazed. The guide showed us how the movie sets for the series were made. He explained how creators use our own brains to do part of the job needed to enjoy the film. I suppose I learned here more about filming than I did during my whole previous life. But it was not only learning; it was enjoying the beautiful sets and admiring the ingenuity of the film makers. 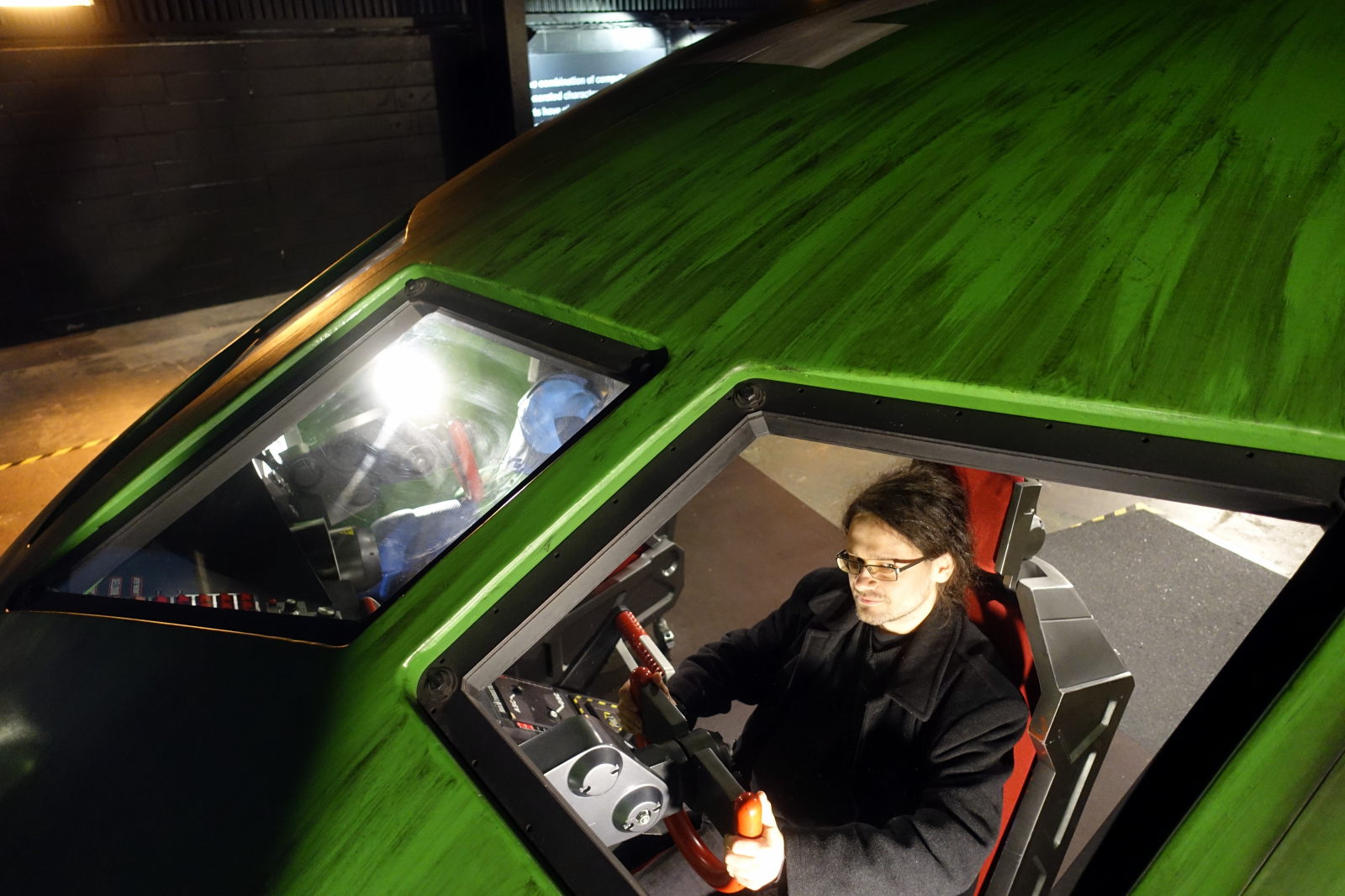 There are more pictures from Weta cave in my newer post.

Science is good for SF fans

I will not describe all of the museums I have visited. Large part of them was interesting but there will be my trip report where you can find some more data. Yet here I want to mention one special place. A place where there was a museum but it was something more than a mere museum. It is Canberra Deep Space Communication Complex: working ground station.

This was an awesome experience. I had a pleasure to be there with a small group of fans. Possibility to visit the place which is used to communicate with space. To see the antenna that received the famous words by Neil Armstrong: “That’s one small step for man, one giant leap for mankind.” The place was really inspiring. I want to read something more about space and the universe. I regret I do not look into the stars often enough… 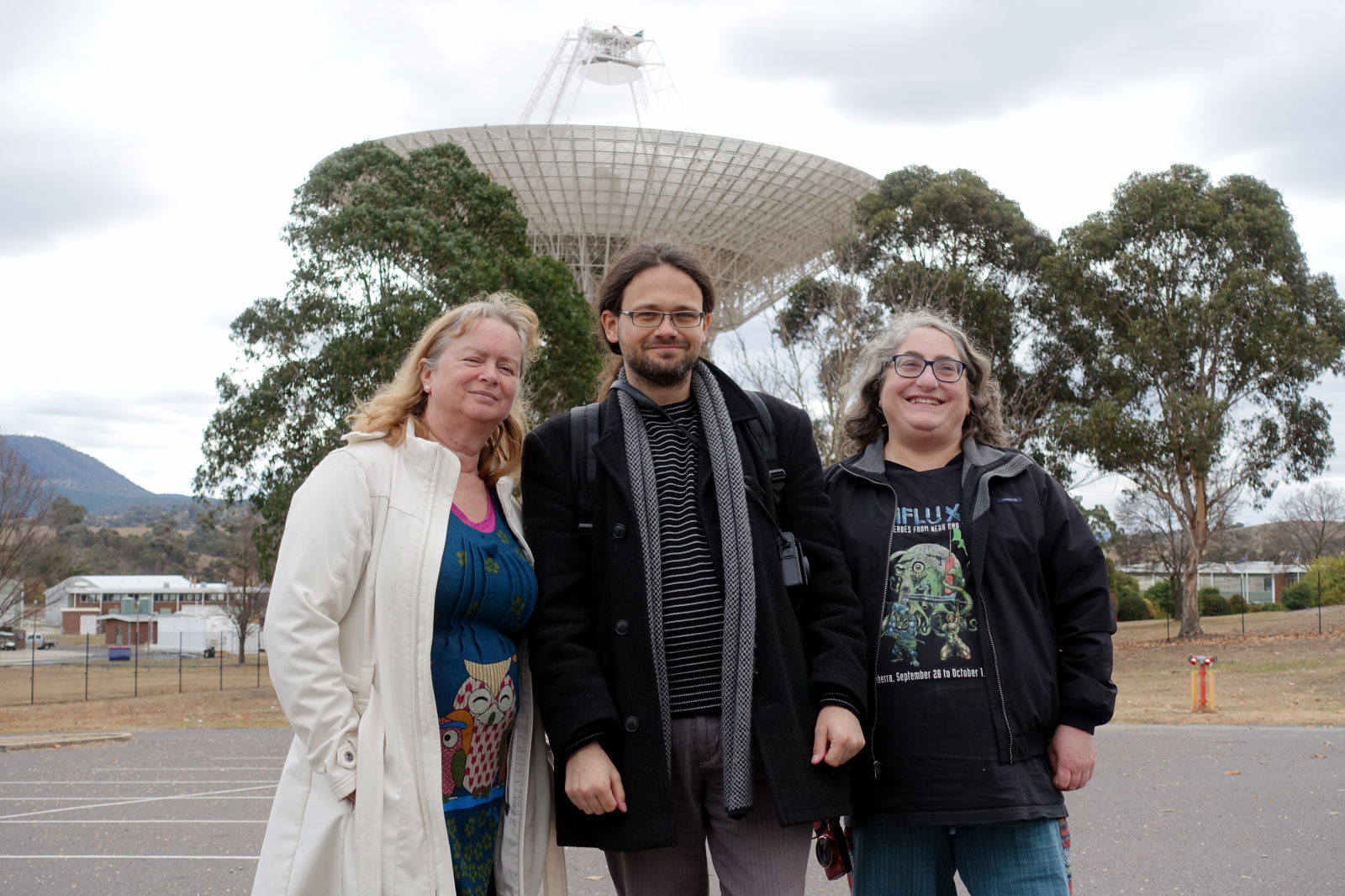 Donna (on the left), Gillian (on the right) and myself (in the middle) in front of Canberra Deep Space Communication Complex.

As mentioned before, apart from the antennas there is a museum. Although it is quite small, it is still an interesting one. I saw some space food and it seems that being an astronaut is not the best thing to do when it comes to enjoying meals. There were also some models of spacecrafts and parts of the historic spacecrafts. Lastly there was a small sample of the moon rock. It looks pretty ordinarily but you know, it is a rock from space.

There are more pictures from Weta cave in my newer post.

The trip is over and I am still excited. The post is way too short to write about everything but I hope that it gives you a glimpse of what I have experienced. I know that the GUFF trip was unique. If you are wondering whether you should try running for GUFF, the answer is short: yes.

My next post will treat about Magnificon and it will be published on 19th July.