You may ask what was so bad about Falkon this year that I could not write a nice report. Well, there were a lot of things that surprised me in a negative way. There were some bad symptoms before the con, but I had hoped it would not be bad anyway. Well, I was wrong. There were some minor issues at Falkon every year, but they had not spoiled the fun I previously had had at the event. It was unfortunately worse this year. 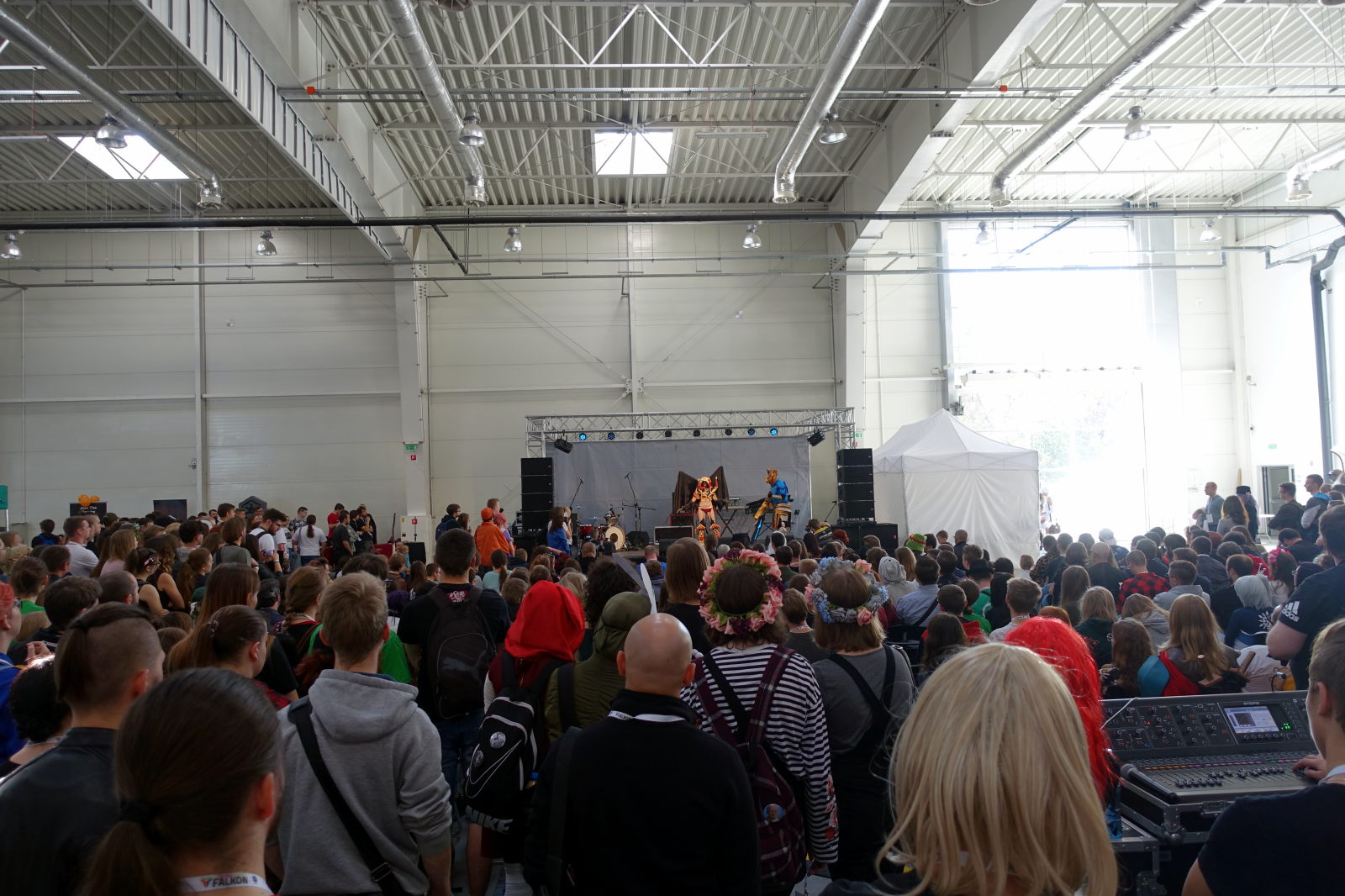 Falkon is a big event held in a fair-exhibition centre and nearby school. The stage was located in one of the big halls.

There was a small issue with my registration, but this is something that just happens sometimes. We solved it relatively easily by calling one of the area heads for programme who confirmed I am a programme participant. Normally, I would not write about it – this is a simple mistake that can happen. The problem is that the person before me as well as person after me also had the same issue. Maybe it was a stroke of bad luck and all three people with the issue were at the registration at the same time, but the impression I got was not the best.

I really love publications that the conventions prepare. I do collect the pre-con publications like Progress Reports and also t con publications available at the cons. Falkon usually gives two programme books. The thick one containing a description of the programme items and a lot of other information and the thinner one with programme tables, maps etc. There is a lot to complain about these publications. I will however mention just the two biggest issues. 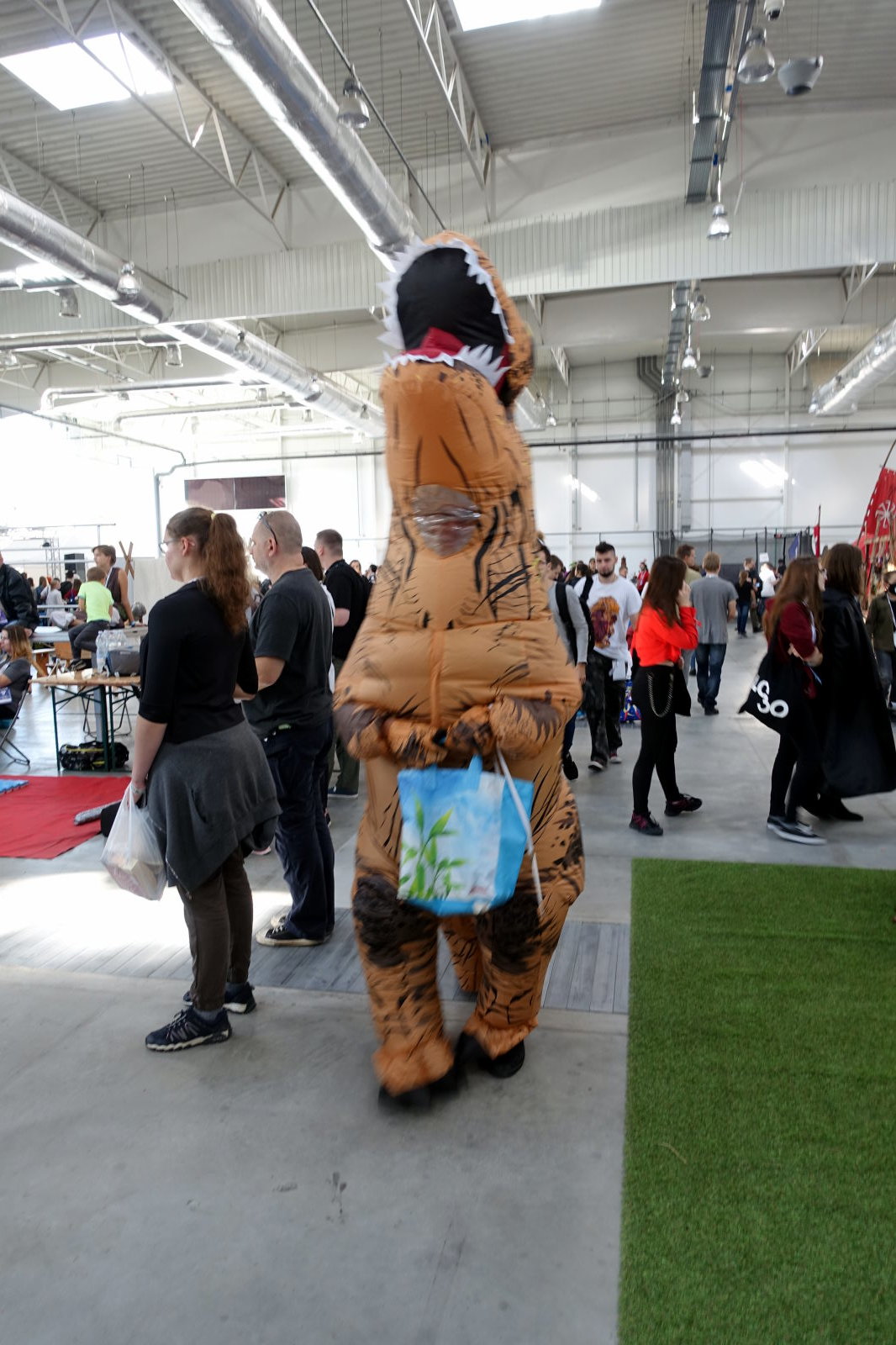 It seems that T-rex costume becomes quite popular at Polish conventions.

The programme tables were printed with such a small font, that it was difficult to read the text. The names of the weekdays were not present in the tables. And if that is not enough only the Friday one had column headers with room names. Yes, you are reading it right – for Saturday and Sunday you had to check which column the item is in and then check on the Friday table which programme room it is. The map of the dealers hall was even worse. The font that was used together with the colour of the background made it unreadable for me even in a good light.

The thick programme book was quite good with just one big mistake. It was published before the con on the web and it lacked descriptions for one programme room and for the Kids Zone. The good thing is that the missing descriptions were inserted into the booklet at the convention. 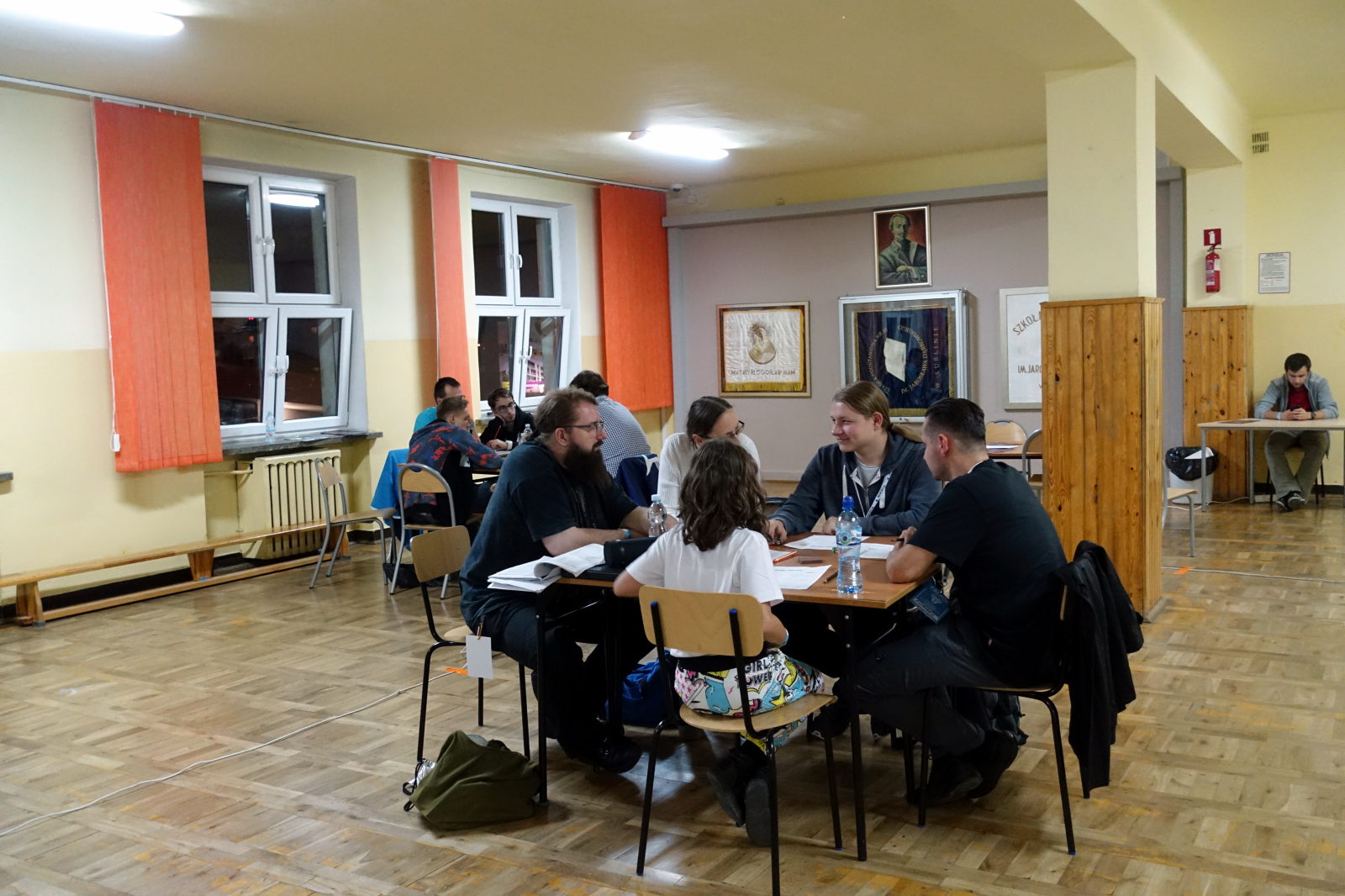 Was it really that bad?

It is time to stop complaining now. There were some other issues, but almost each and every convention has them. Now I would prefer to concentrate on the good sides of Falkon. And luckily, there were good sides to it.

For a few years now Falkon has rather been a social event for me. This year, I spent a lot of time with other friends than I usually do at Falkon, and I really enjoyed this time. Lublin is a beautiful city and evenings spent in bars/restaurants/pubs are lovely. The atmosphere of the old town is really great – I recommend you to visit Lublin some day. I know this is not something that depends on the con itself, but it somehow happens that each year Falkon is a really cool social event – and not all cons are like that. 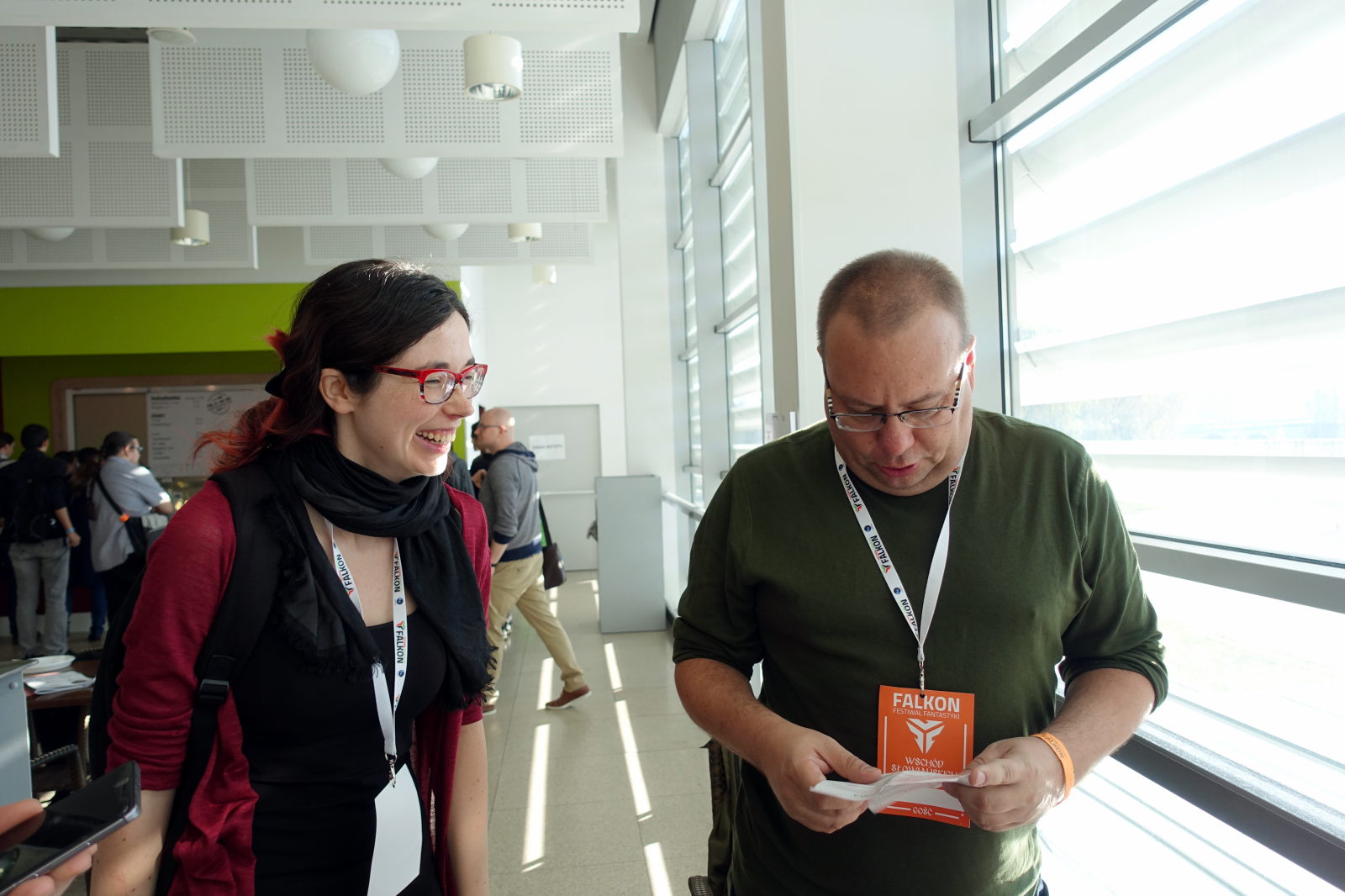 This is not a picture from a pub but it shows the great atmosphere that accompanies this convention all the time.

I also quite enjoyed the programme items I visited. There were not too many of those (and I must say I actively participated in/moderated three of them) but I had a good time and these events gave me food for thought. I had seen some more items I would have liked to attend, but I had a lot of other things to do (including manning the fantable of the Imladris convention).

It seems that this year I am going deeper into gaming as I especially enjoyed my time at two gaming items. The first one was a panel with the Polish RPG publishers. During this meeting, they revealed their plans for four big titles that will be published next year – D&D 5th edition, Call of Cthulhu 7th edition, Warhammer Fantasy Role Play 4th edition and The Witcher. I am not sure whether I would play any of those, but the next year would be quite interesting for the RPG community in Poland for sure. These games were announced some time ago, but it was the first time I was able to listen to the publishers actually speaking about their plans (I was not able to attend respective programme items at earlier conventions). 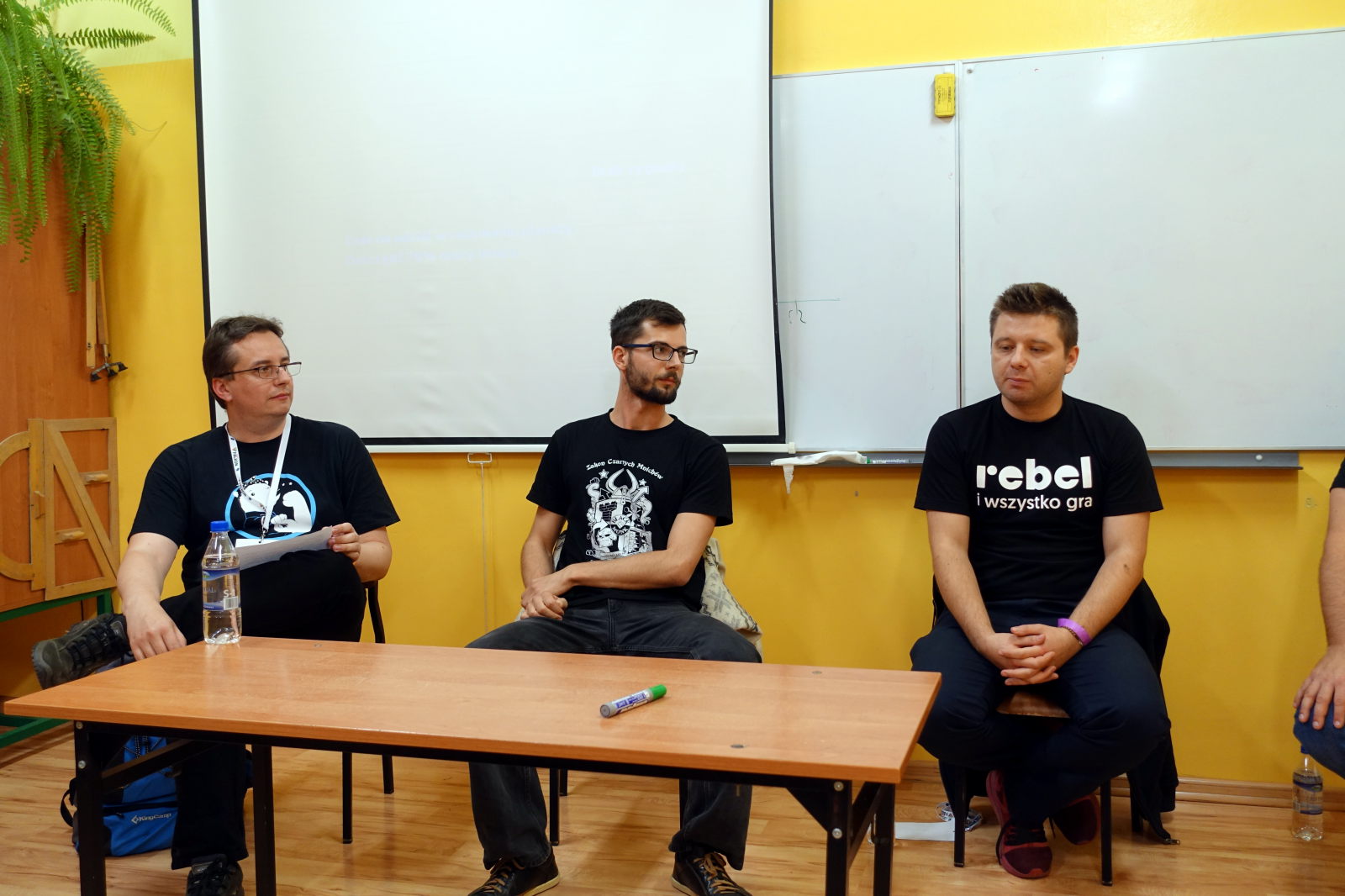 The second gaming programme item one was called “Let’s talk about RPG” and it was a nice discussion about everything surrounding our hobby. So we talked a little bit about the expectations the RPG players have when it comes to conventions. We spent much more time discussing what we could do to encourage others to start playing the tabletop role-playing games. 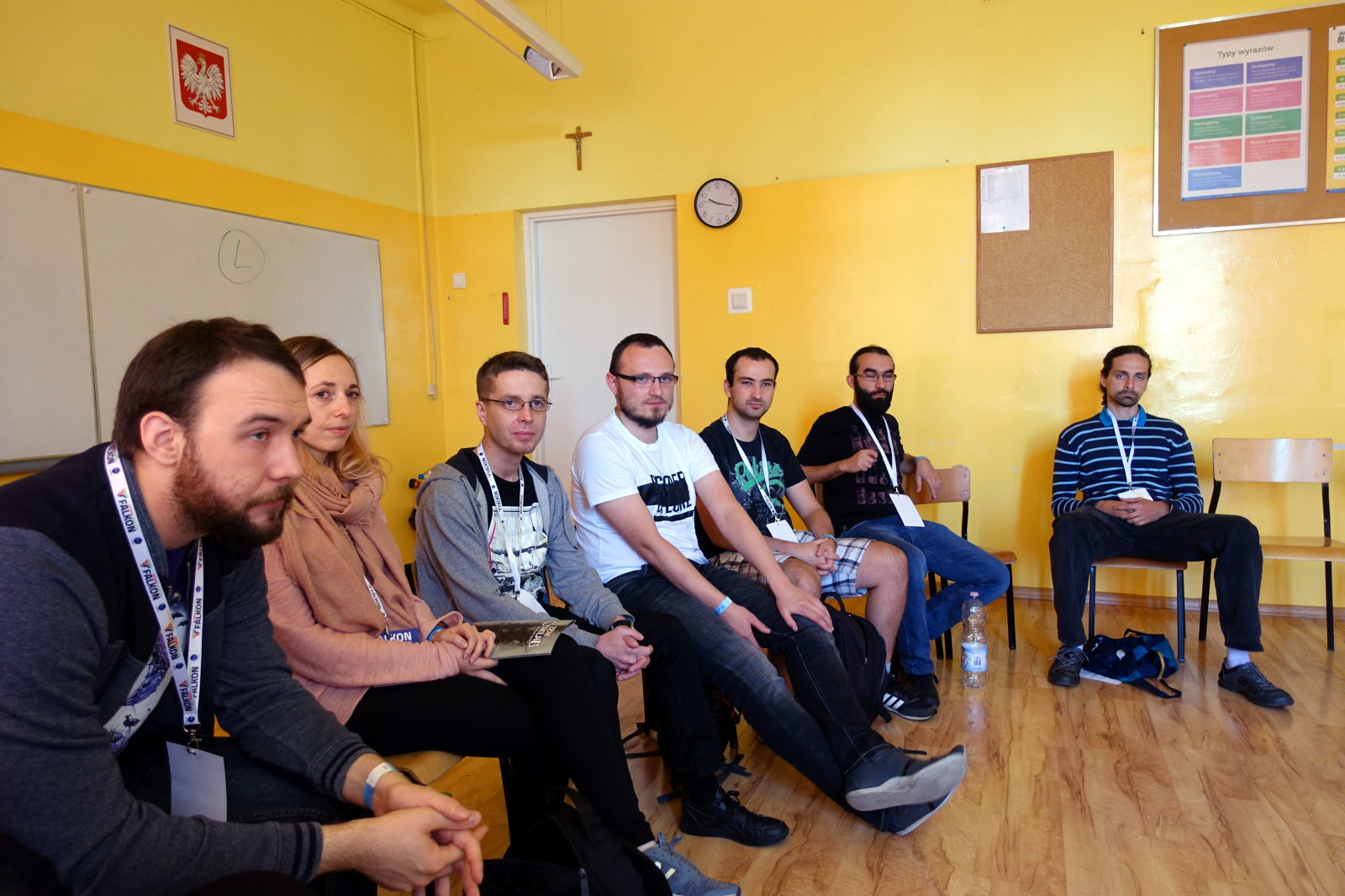 The theme of Falkon

This year Falkon’s theme was the rise of the Slavic myths. The theme had a nice impact on the visuals for the con and it was also reflected in the programme. Last but not least, some of the members were inspired by the theme and prepared appropriate costumes. I really like it when the convention has a theme and when it works well. The one chosen by Falkon this year was not the best I have seen, but it gave the con some very nice flavour. 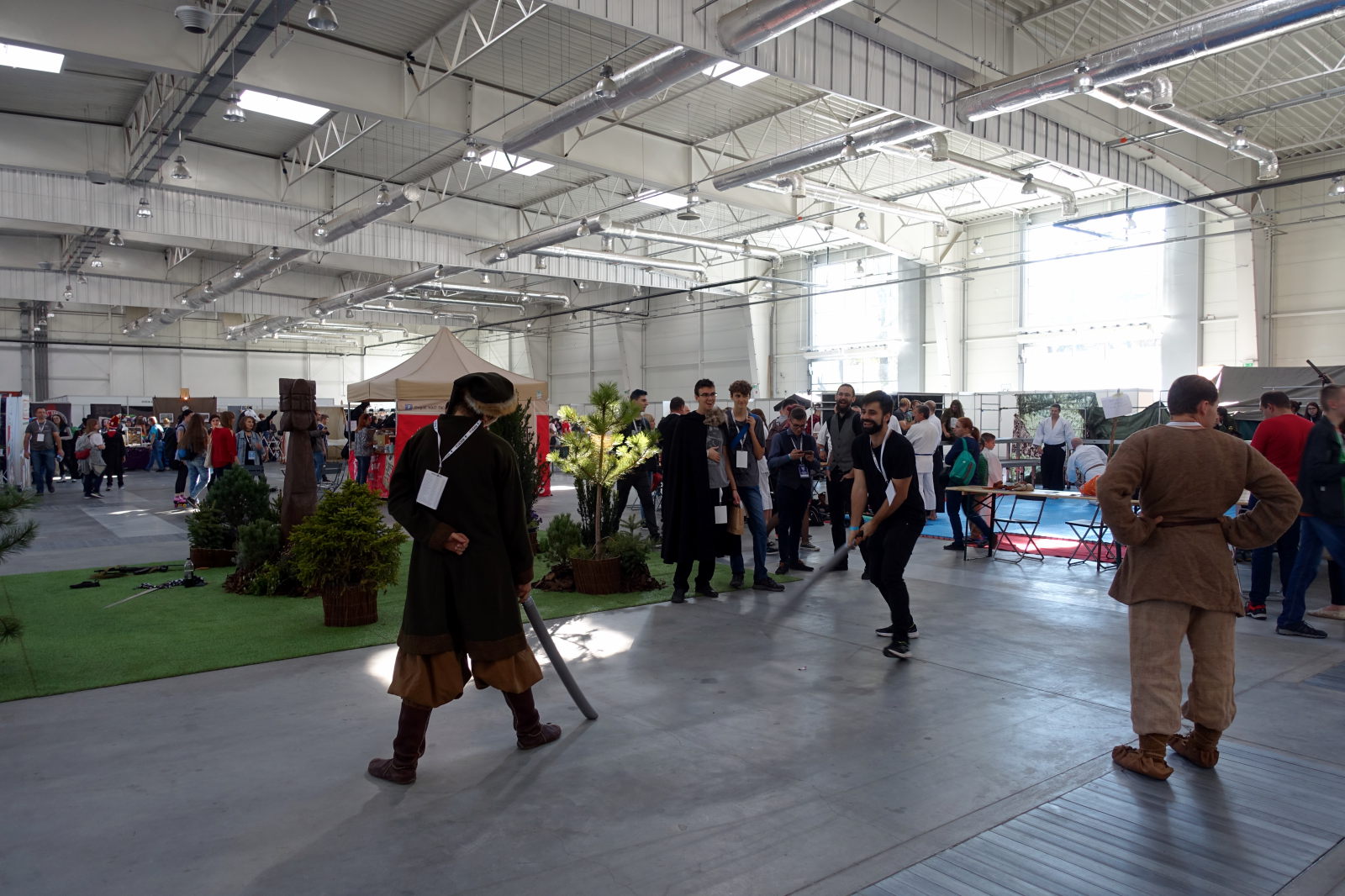 One of the fighters is in a costume that slightly relates to the theme.

Speaking about flavours – I have a sweet tooth and I must admit I satisfied it this year. There were a few places near the con that offered some sweets. I tried two of them and they had really delicious stuff. One bakery had muffins and cupcakes and the other, a café, had ice creams and waffles (unfortunately, it was too cold for ice creams for me).

Hope for the future

All in all, I had a good time at Falkon, but I came back quite disappointed. There were many mistakes present – both small and big. Fortunately, none of them was really catastrophic, but their amount left some distaste in my mouth (luckily, the sweet pastries I was able to taste partially made up for it). I know that the team who took care of the convention this year was inexperienced to a large extent, so we may hope that the next Falkon will be better. I would really like this to happen as it usually is a nice con and I like attending it.

My next post will treat about Imladris and will be Published on 17th November.