SFeraKORon took place on the second weekend of May the. It was organized by the SFera society from Zagreb. Although the convention was mainly in Croatian, I decided to visit it and see how it would go (and as it was online, the whole thing was much easier). I managed to participate just in a small part of the convention but I will give my thoughts about it nevertheless.

There and back again

One of the reasons why I did give it a try is the fact that Eurocon 2012, which was organized together with SFeraKon, was my first foreign convention. I really enjoyed my time there and it convinced me to travel to cons in other countries. Even after eight years I still remember how good the programme was and how nice the people were. 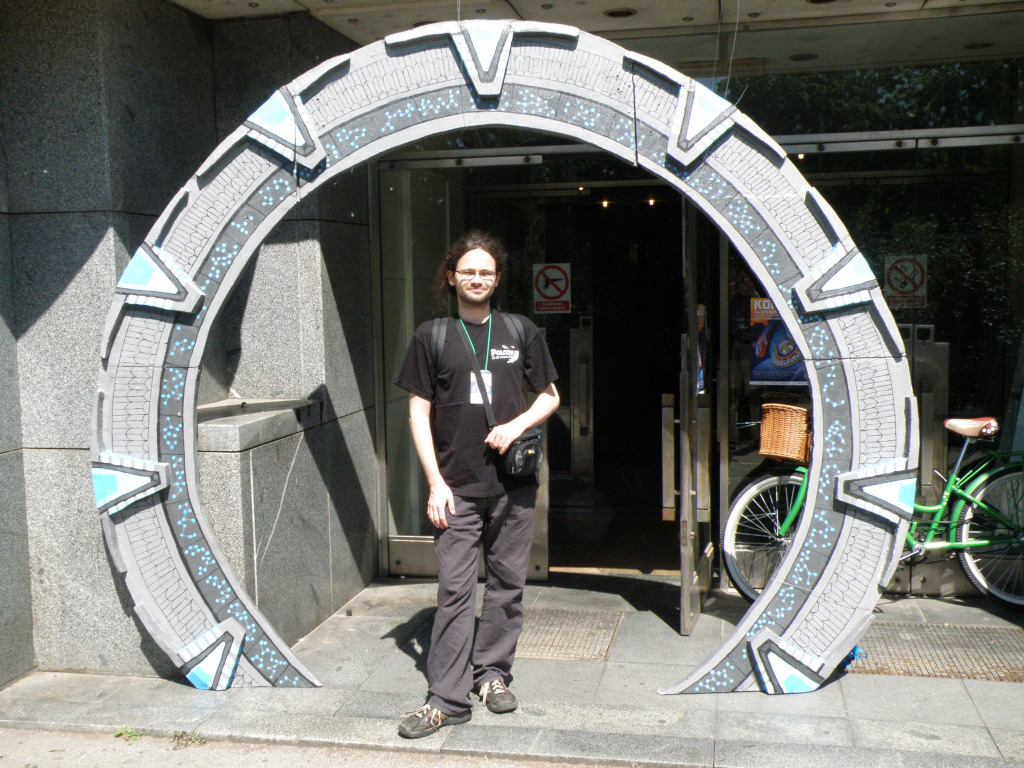 One of my favourite pictures from Eurocon 2012.

I have been planning to visit another Croatian convention for a few years now. Over the time, I met some fans from this country on international cons and on Pyrkon in Poland. I was really happy to see that Rijeka would be hosting Eurocon 2020. And yet, before the opportunity to visit Futuricon (Eurocon in Rijeka), it turned out that I would be able to join yet another convention in Croatia, so I really had to go :).

A different approach to programming

Most of the English items during SferaKORon were recorded and streamed on Facebook (I believe that the simultaneous streaming on YouTube was added later). There was also time for discussions with the speakers afterwards, on Discord. There are certain disadvantages of such approach – the feeling of listening to a recording is different than listening “live”, yet this way there is a smaller risk of cancelling the item due to any network issues. Most of the programme items are now available on YouTube.

The opening ceremony was held in Croatian, but I managed to understand a bit of it. Afterwards, it was posted on YT with English subtitles. I also managed to listen to part of one programme item in Croatian. Of course I didn’t understand it, but I found out that listening to Croatian is quite pleasant thing to do.

There were three items by Autun Purser – and it was amazing to watch them. Firstly, he spoke about his last scientific expedition to Antarctica. We had the chance to see some of his amazing movies (including the ones taken underwater). I was really surprised by the diversity of life there. I was sure that due to low temperatures it will be less intense – and it seems that I was quite wrong. The second of his talks I would like to mention was devoted to his new art project – Seed Pods. It is a slow paced game that will start soon (you can still join it). Autun presented the process of creating graphics for the game and it was astounding.

As for the other English items, there was an interesting talk “SF in Translation” by Francesco Verso. He presented the publishing house he runs. Francesco publishes SF literature from all over the world. I’ll need to buy some of these books to see how the genre is written in other countries. I missed the presentation about Futuricon. Fortunately I managed to watch it after the con. The very important message there was that decision whether Futuricon will be possible to run in person or on-line was going to be made no later than in the middle of June.

A few days before the con it was announced that there will be English part of the con. I proposed I’d make a presentation in English if needed and it was accepted. As soon as I got acceptance I translated my talk “Around the World in 80 conventions” to English. I cannot judge how well it went but, I had some audience. Now I hope they enjoyed the talk (as I did not have the time to record it, I was speaking live on Discord).

As I already mentioned, I really enjoyed time I’d spent with the Croatian fandom before, so I was looking forward to the social aspects of the con. It took place on Discord and I participated only in the text discussions. There was a separate channel for international visitors in English. It allowed me to learn a few things about the Croatian fandom including “the cabbage incident” (explained in details on this blog – you can use Google Translate to understand it). It was also here where I met another Polish fan – Mahiyana – with whom I haven’t met in Poland. The Discord channel was still relatively live on Monday and a few fans discussed the “post con sadness” there. 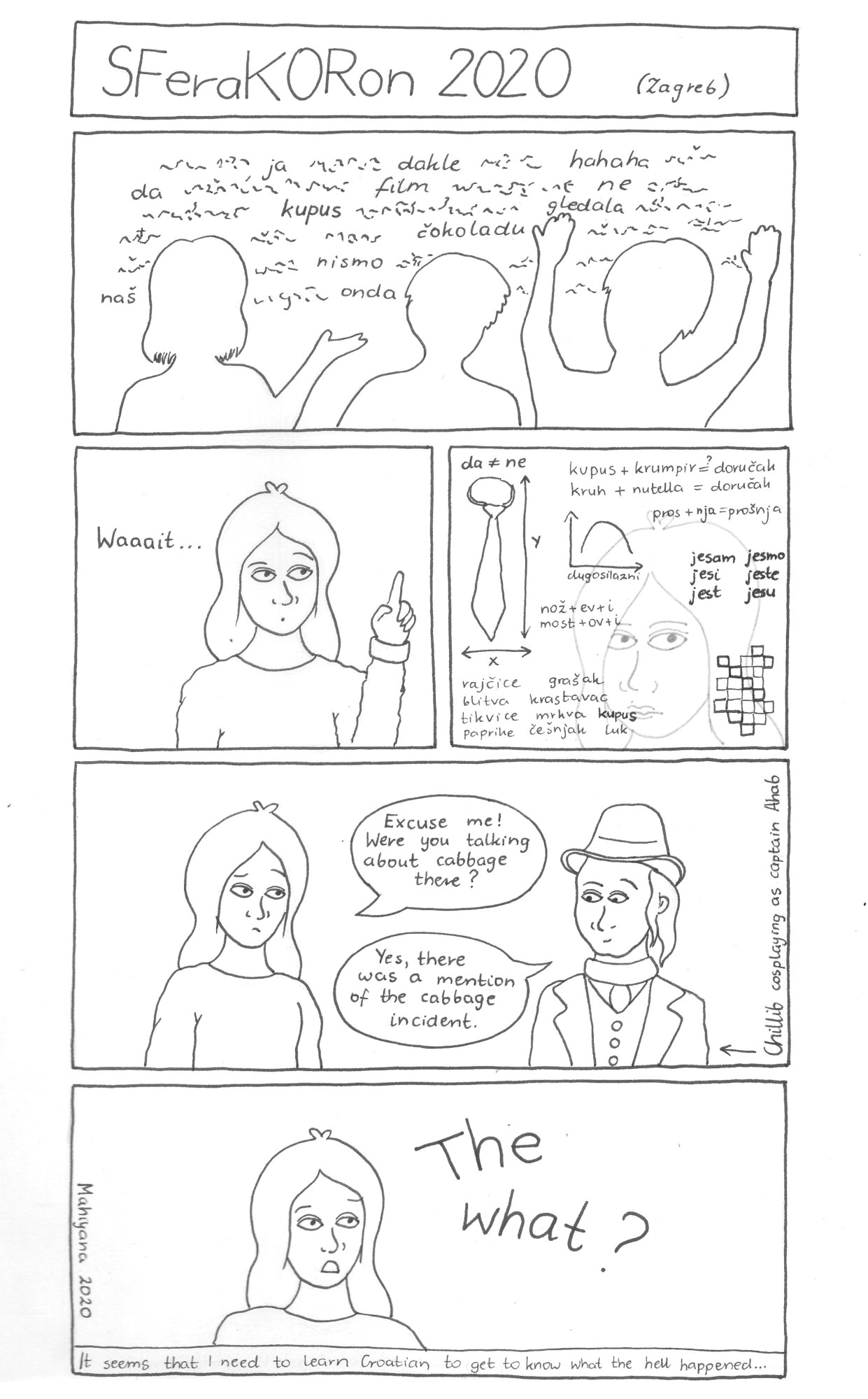 One of the two comic strips that Mahiyana shared during SFeraKORon.

All in all, I enjoyed my time at SFeraKORon. I was not able to enjoy the con fully, as a large part of it was in Croatian, yet I felt welcomed and I found a lot of things to do. Unfortunately I did not join the gaming (maybe next time). Still the programme and some Discord chats were enough to spend a nice weekend (even though I had to devote quite a lot of time to do other things at home). I am sure that if the Croatian fandom launches the next online event, I will try visiting it.