This Easter, I participated in ConFusion – 2021 Eastercon. My overall experience was positive but certain aspects of the con were a bit confusing (pun intended). There were also some issues spotted by me and others. Yet despite them, I had a good time.

Over the last twelve months I got used to virtual conventions. Even when they introduced new platforms the difference usually would not change the feel of the con. When it comes to this year’s Eastercon, the situation looked differently.

The social space was organized in Gather.town. The app was used for parties at NASFiC. Yet to my knowledge, ConFusion was the first SF convention that used it as a main social platform. The gaming feel of the tool was nice. The possibility to spot someone walking down the corridor was awesome. I had a good time. The issue that I noticed was related to performance. It seems that whenever I was approaching a group of more than ten people, my computer had some problems. I know a few others experienced similar issue. For me, it was not very troubling – I simply had to avoid too big gatherings. Another concern with regards to the app is related to its accessibility. As per my understanding, it did not allow for lip reading. It was also not accessible from mobile devices and that posed a problem to some of the members and potential members. 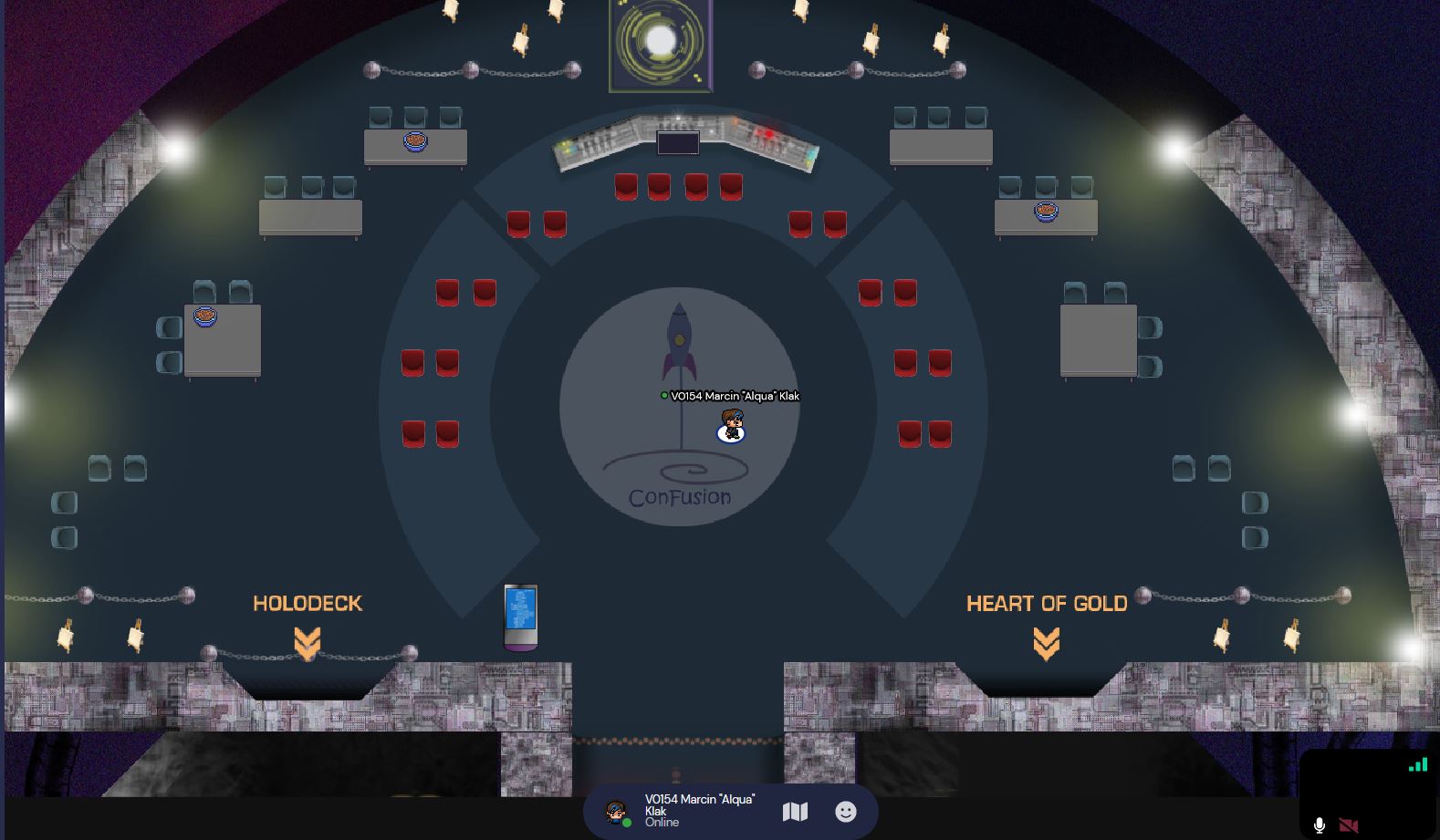 Picture taken in one of the Confusion spaces.

I liked a few things in this platform. First of all, the option to meet your friends in the corridor was great. It was getting a bit closer to the “look and feel” of a physical convention. I was afraid that walking around the venue in Gather would take too much time but I kind of enjoyed it. ConFusion had a great space created in the tool. The venue was a huge spaceship. Its map was visible in the app as well as in the programme book. The rooms and the corridors were designed to give a feeling of a spaceship. Of course, they had to be functional (and they were) but the feeling was there. The graphic design was prepared by Alex Storer/The Light Dreams and it was a great job.

I think that if all conventions were to use Gather it would be a bit too much. Yet experiencing it at Eastercon was a pleasure. I am troubled with the accessibility issues though. I hope that the application will improve soon. Maybe a solution for a convention that would like to use it will be to have both Gather and another platform in place. In fact, Confusion had also Discord but its use was very limited during the con. 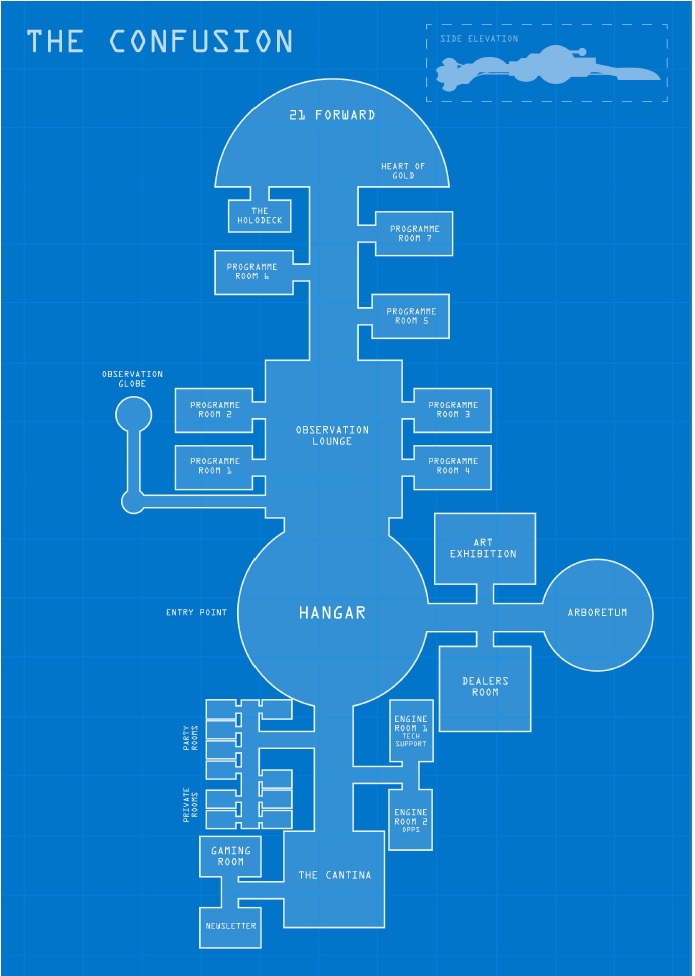 I loved the design of the space and the map that appeared in the ReadMe Book.

I Missed Most of the Programme

Because of a combination of a few factors, I missed most of the programme. On Friday and early on Saturday there were some technical problems with the programme streaming. Because of that most of the items I wanted to attend were not streamed*. Majority of them were recorded so members had the chance to view them after the con. Later I was busy with many things – meeting friends, taking care of the Glasgow in 2024 fantable and so on. I attended only a few programme items (including two where I was one of the speakers).

From the Programme Participant perspective, the used solution – vMixcall was not perfect. It was less intuitive than Zoom or Streamyard (or other platforms I used). I know that it gave more options but I would still prefer other solutions. The good side was that it allowed members to access programme both from browser and within the Gather platform. The biggest issue I observed was with the delay in the stream. It was about 30-120 seconds. It does not seem to be a lot but it was a significant problem during the Fan Funds auction. We managed to overcome it by using the platform for questions (sli.do). Here I want to thank everyone who helped us to make this auction happen. It was thanks to the effort from volunteers that we managed to host it. And thanks to donators and fans buying stuff we obtained over £1300. 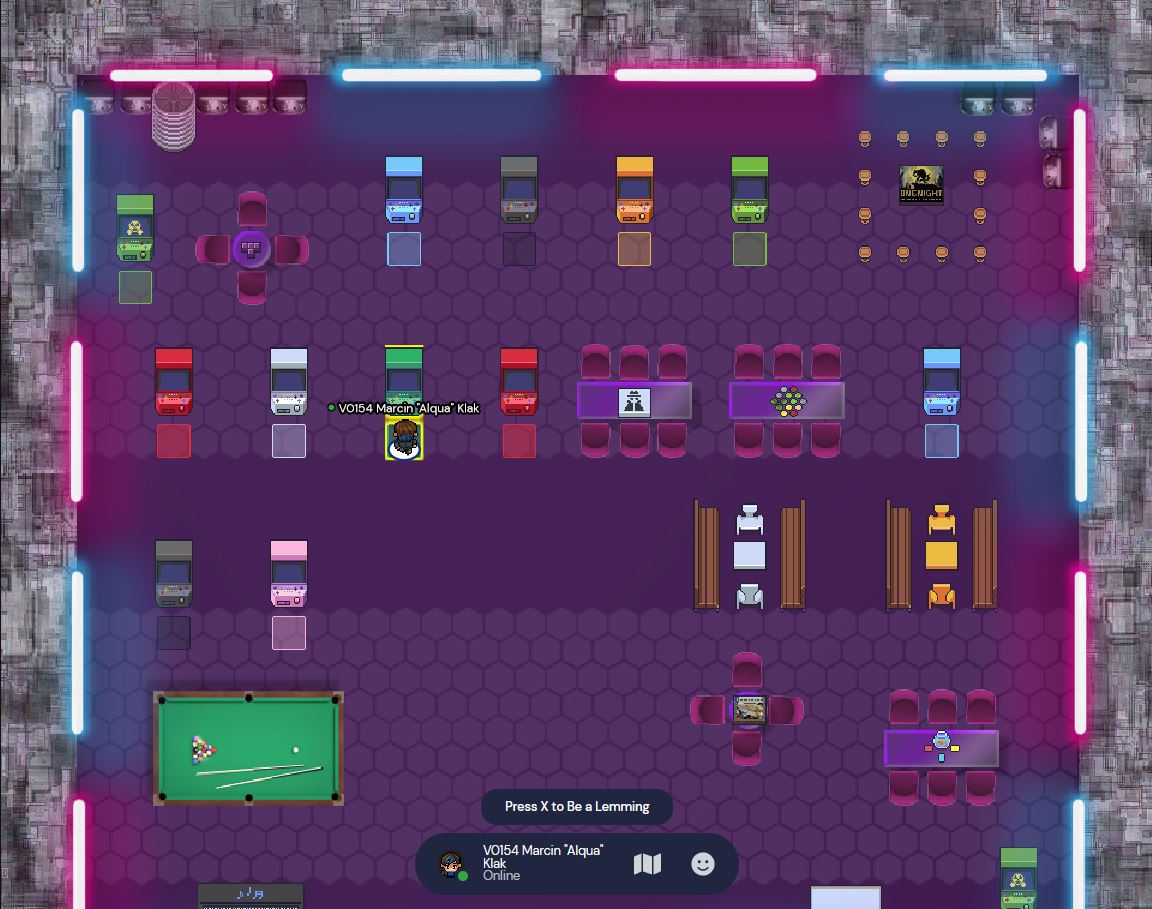 One of the spaces to meet othe rpeople or to play games.

The Way to Display Art Online

Many people complimented the ArtShow. I must say that the solution that was used worked great. When moving to the ArtShow in Gather, the user had the possibility of opening a website called Kunstmatrix. Within it, it was easy to navigate to separate rooms where works of the artists were presented. Kunstmatrix allows you to walk around a 3D model of a room and look at the items presented on the walls. It gives you a bit of a feeling of going around an Art Gallery. 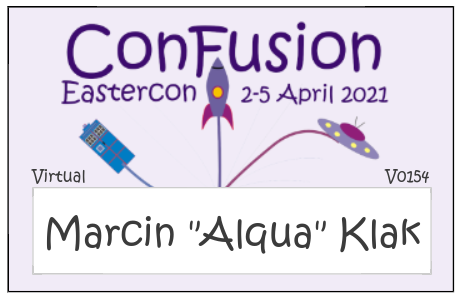 Even the best tool does not suffice if the art presented is bad. Fortunately, the selection at ConFusion was great. I will mention just two parts of the exhibition. Iain Clark presented multiple works including amazing pieces created for Dublin 2019 an Irish Worldcon. His Shipbuilding over the Clyde that won the BSFA Award this year was present as well. I enjoyed the An Alphabet of Armadillos exhibition prepared by the Glasgow in 2024 bid. I also relished the artwork exhibited by other artists. I’m not able to list them all here but I was happy that I had the opportunity to see them.

A Bit Confusing but Good Weekend

A few things were confusing at Confusion. I mentioned the issues I faced above. Yet all in all, I spent a lot of time with friends old and new and I enjoyed myself. I would love for the ConFusion to be perfect but even with the issues I managed to spend a quality time at the con. I only regret it was not possible for everyone. 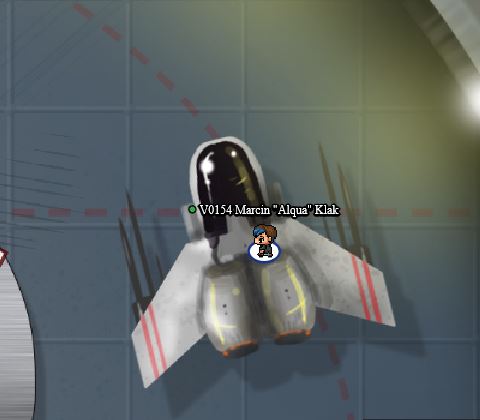 There were a few hidden things in Gather. One of the routes allowed to “get into” the X-Wing.

If I would be sensible I would use the days after the con to get some rest. Instead I attended a small local convention in Virginia – Griffincon X. I won’t be writing a separate report as truth to be told I only listened to a few programme items and talked a bit. In the future I should refrain from attending a con the day after previous one finishes.

My next post will be published on 6th May and will treat about Lajconik.