So here they are – my musings about the second category of works nominated for Hugo Awards – Novelettes. First of all I must mention that there will be some spoilers in this post. If you haven’t read the stories and you don’t like spoilers it may be best to refrain from continuing reading this.
The order in which I covered the stories is not the one I used on the ballot.

In the beginning I must say that I liked this category better than the Short Stories. Of course some works were better than the others but overall I had the positive experience. As I mentioned before Short Stories seemed a bit optimistic to me. This is not true for the Novelettes. They were moving, interesting, original but they did not evoke this optimism.

The first of the nominated stories I read was Burn or The Episodic Life of Sam Wells as a Super by A.T. Greenblatt. I had some mixed feelings. It is another approach to superheroes narrative. People with superpowers are not well received by the society and they need to earn their trust. This definitely sounds reasonable. Author also managed to portray how sudden development of strange powers may impact ones live and also self-esteem. It is not easy to control ones skills from their onset. Powers that characters have are not always allowing them to solve everything without any issues. Often there is other – darker aspect to some of the actions characters undertake. This all seems like a series of good reasons to enjoy the story yet despite all that I am not a big fan of it. The story simply didn’t click with me. It is well written but for me it somehow lacks the thing that would make it special in my eyes.

In contrary The Inaccessibility of Heaven by Aliette de Bodard has something almost magical. The world in which the story takes place is strange and dark. There is goodness in this world though. Main character is helping at the shelter for the Fallen angels. They need help once they land in Starhollow. There is also evil – bones of the Fallen are used as a drug, and as one may imagine some bad things are done to obtain them. On top of that someone is murdering the Fallen in a very nasty way – and this is the main part of the plot. I like the noir atmosphere of the story. I liked the characters – both positive and negative ones. They were all nicely crafted. The story not only made for a good reading but was also moving. 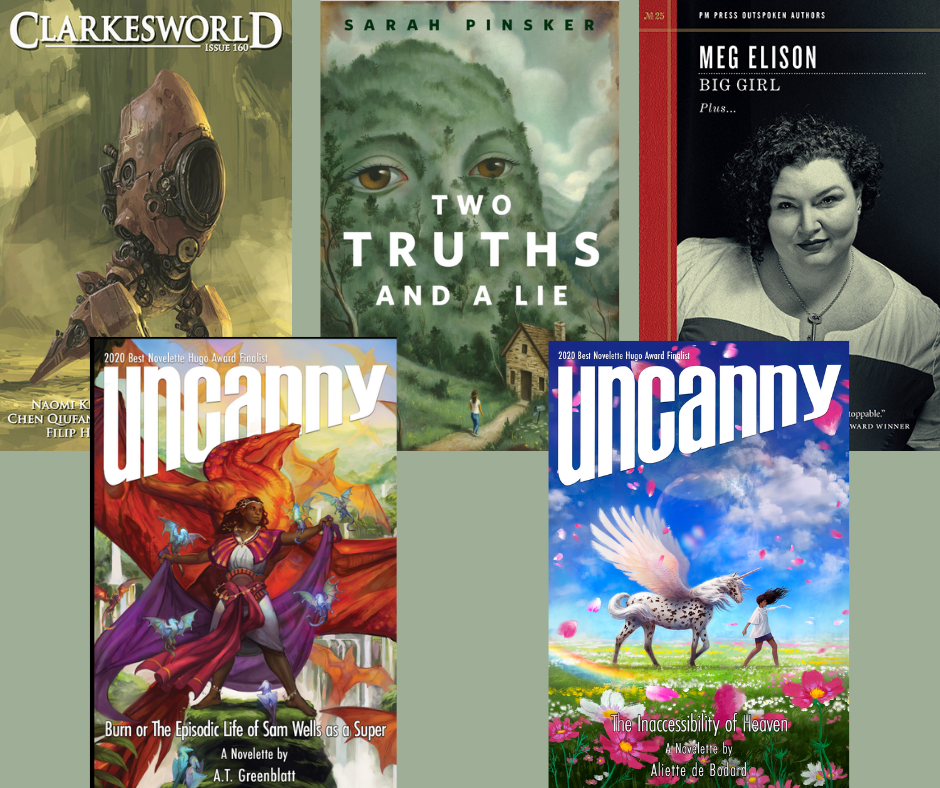 The Pill was published also as a The Big Girl

Another moving story was The Pill by Meg Elison. The whole idea for the story is that some company developed a pill that can treat obesity. One only needs to take it and will gain a perfect body. There is a price however – the mortality rate is 10%. Despite this drawback many people decide to use it. When I was reading this novelette I kept thinking about how obesity is approached in our society. I was afraid that the 10% chance to die would be accepted by some people to loose weight. And this is terrifying. I found this story as a way of criticism towards the current push for everyone to be fit. Even when people have good intentions the pressure they exert on others may be harmful.

I have some issues with Helicopter Story by Isabel Fall. I believe author wanted to overturn the stupid transphobic comments people make when discussing about gender identity. Unfortunately I was not able to enjoy the story. Maybe it is because I saw how painful such transphobic comments are? While I fully support overturning this dumb note I was not enjoying how it was done here. Apart from that this work was nice. The plot was good and the sole idea interesting.

Two Truths and a Lie by Sarah Pinsker may be considered a mild horror story. It was not terrifying it even didn’t give me goosebumps but I still found it a bit horrorish. Truth to be told it is also the one about which I have least to say. The idea is pretty interesting. A local TV had a show in which presenter was predicting childrens’ future. The only way in which one was able to escape his fate was through devoting most of his life to do so. Yet the main character and how she finds the truth is even more interesting. It is her case that makes this a horror to me.

Monster by Naomi Kritzer is a very good story. Main character needs to travel to China to help to find her ex colleague who may be the monster from the story title. He used her research and his own genius to create a serum that gave him some powers. They were not superpowers – rather higher strength etc. Yet in order to achieve his goal he killed many innocent people. The formula for the serum may be used to commit more evil things. The main character is perfectly aware of this and she needs to decide what will she do. There was no good decision for her to make. Whichever route she would take it would lead to a disaster yet she must do something and pay the price. It definitely is a powerful and fascinating story.