I promised a post about the Hugo ceremony (and my involvement in it) and here it is. Being able to participate in the ceremony was really a great experience and an honour. I knew before that it would be awesome, but I didn’t realize how much joy it will bring. This post is probably a little bit more emotional than the previous ones, but I hope you won’t mind and will still find it interesting.

Some time ago I was talking to my friend who mentioned that he had an opportunity to help with the Hugo ceremony on one of the previous European Worldcons. He was gophering and he was holding the trophy for some time. I was jealous and was imagining that maybe one day I will be able to do so. And one day I was told that the Worldocn 75 is looking for someone from my region to present the Hugo awards. I spread the word among a few of my friends and then we had interviews and we were chosen for the ceremony. 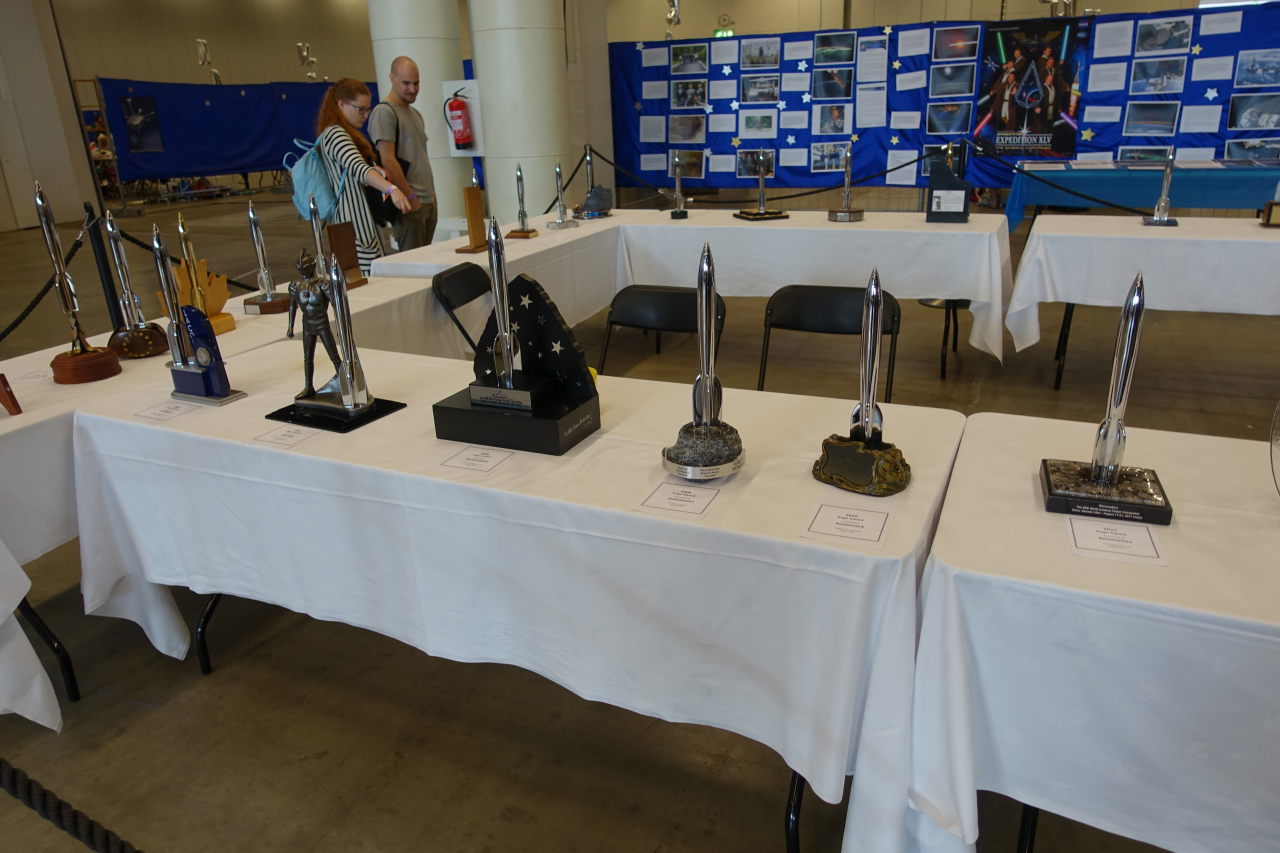 During the interview I had the pleasure to meet (virtually) the toastmistress – Karen Lord and the Hugo Award Ceremony Area Head – Joshua Beatty. I was stressed in the beginning. I really wanted to participate in the Hugo awards as it is really important to me. Together with Nebula, they are symbols of good SF. And when the interview started, I became calmer as both Karen and Joshua were so nice. It made me want to help with the ceremony even more. 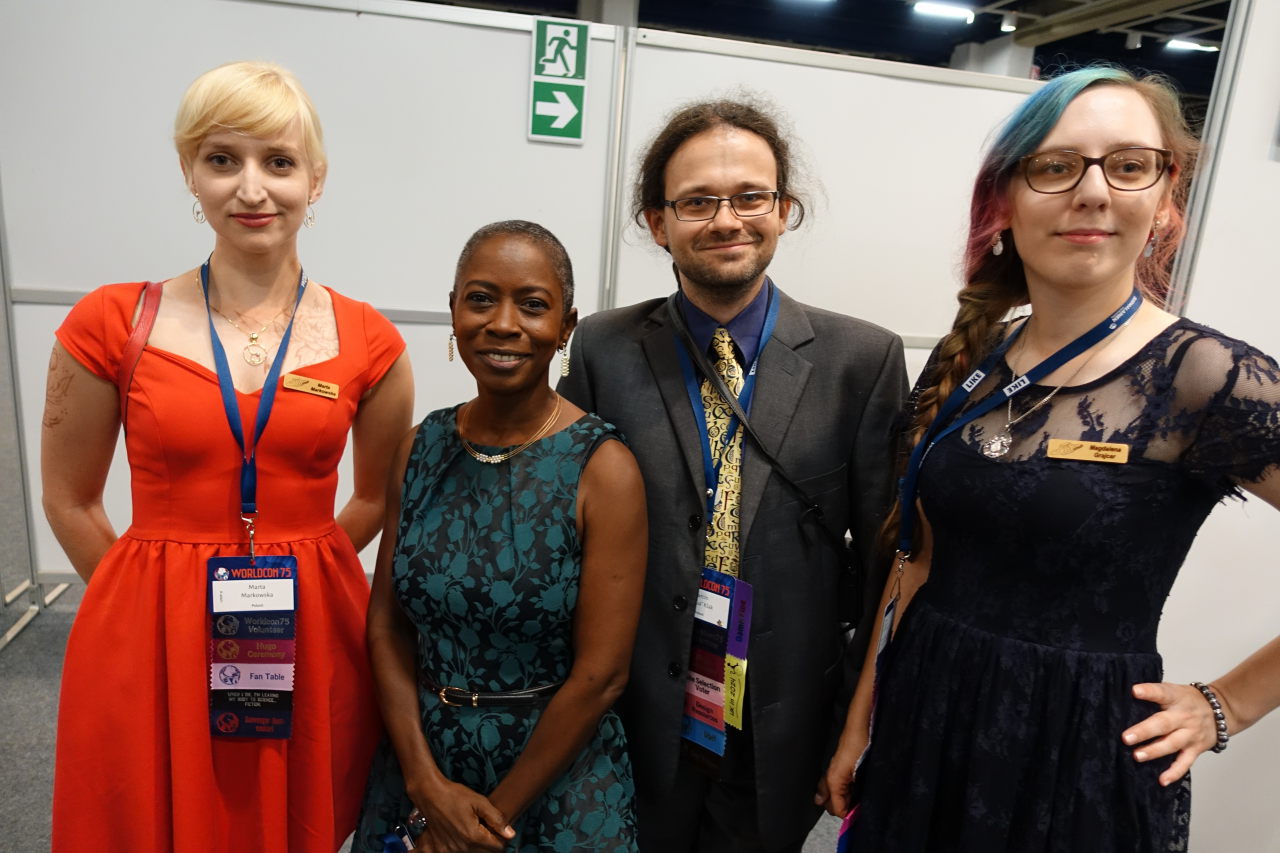 Marta, Karen, me and Magda during Pre-Hugo reception

And then the day came and we received information that instead of one person it would be nice if three of us (Marta Markowska, Magdalena „Serathe” Grajcar and myself) would participate in the Hugo ceremony. We were also asked if we could help with ushering people during the ceremony and we agreed.

During Worldcon 75 I received a beautiful Hugo ceremony ribbon as well as the script presenting mine participation in the event. I also received an invitation for Hugo reception taking place directly before the award evening. The bad news was that because we volunteered to be ushers we probably wouldn’t be able to come to the reception. And here again the fortune was on our side, as ushers head (sorry I don’t remember your name :() did his best to find someone else to do the job, so that we could attend the reception. 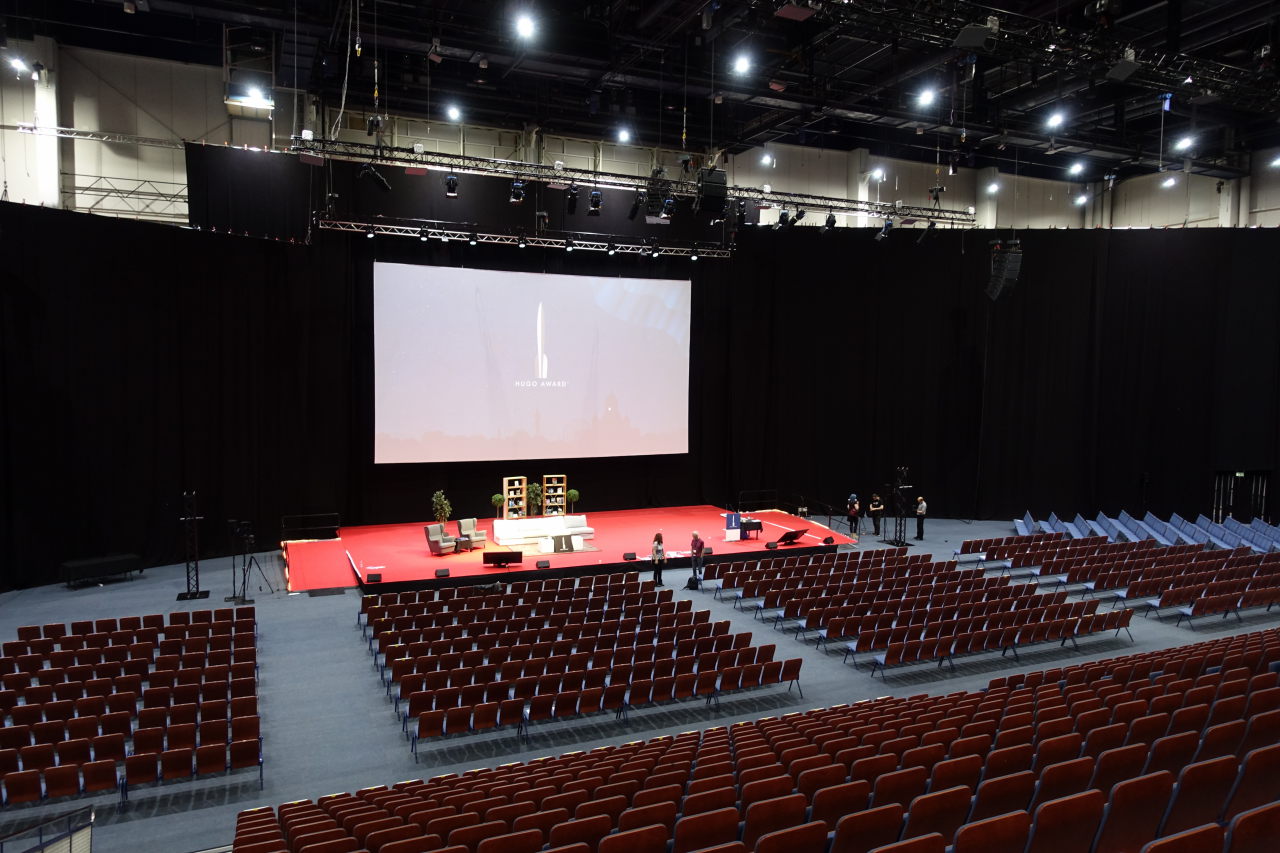 Still, before we got confirmation whether we would be needed for ushering, I received my first task. I had to get to the one of the hotel rooms and pack all of the Hugos to deliver them for the ceremony. So my dream of having Hugo awards in my hands was fulfilled (and I learned what the base looks like :D). 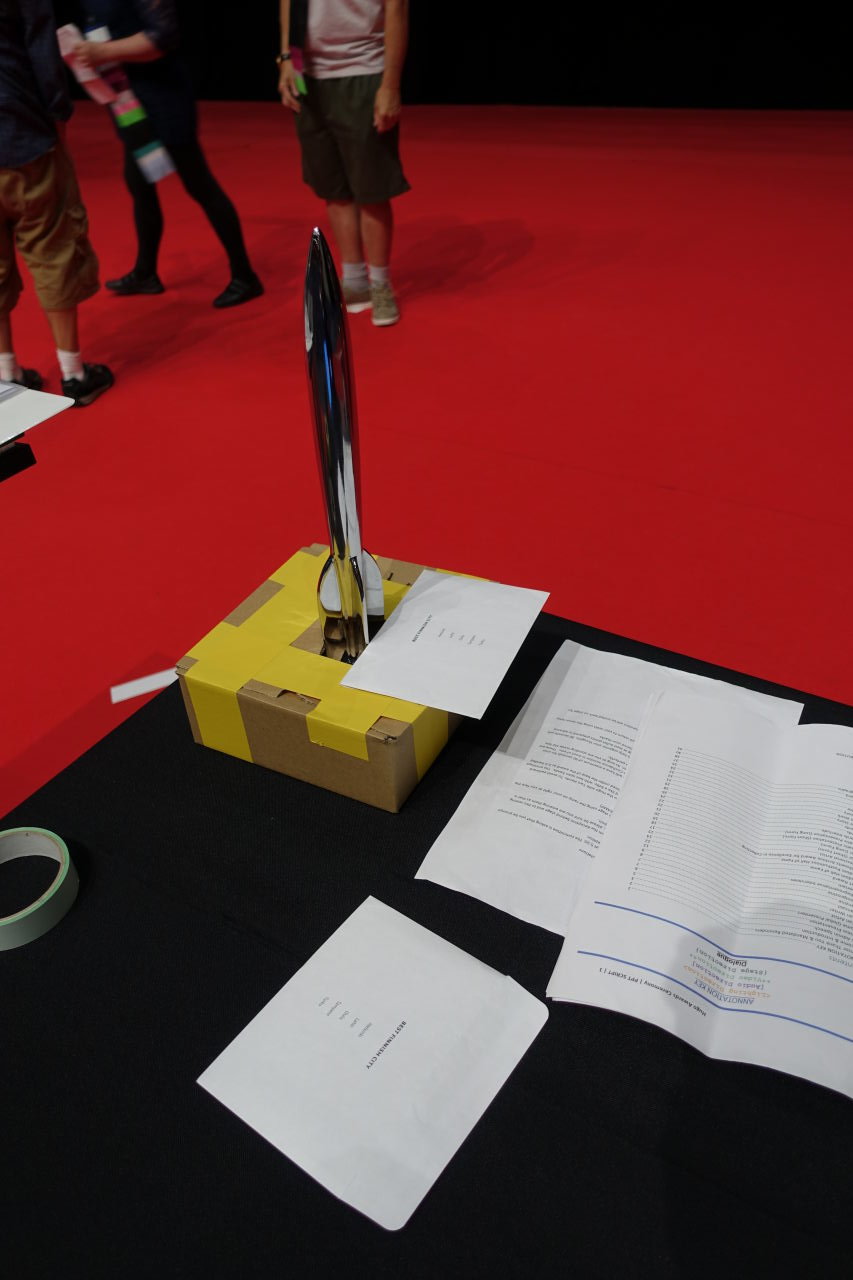 I cannot write a lot here. We came together for the Hugo reception and we spent some time talking to each other. We took the opportunity to take a few pictures (including the one with Karen) and meet some people. And of course I was looking forward for the ceremony itself. What I regret is that I did not spend enough time mingling with people, but maybe I will have another opportunity to do so one day. 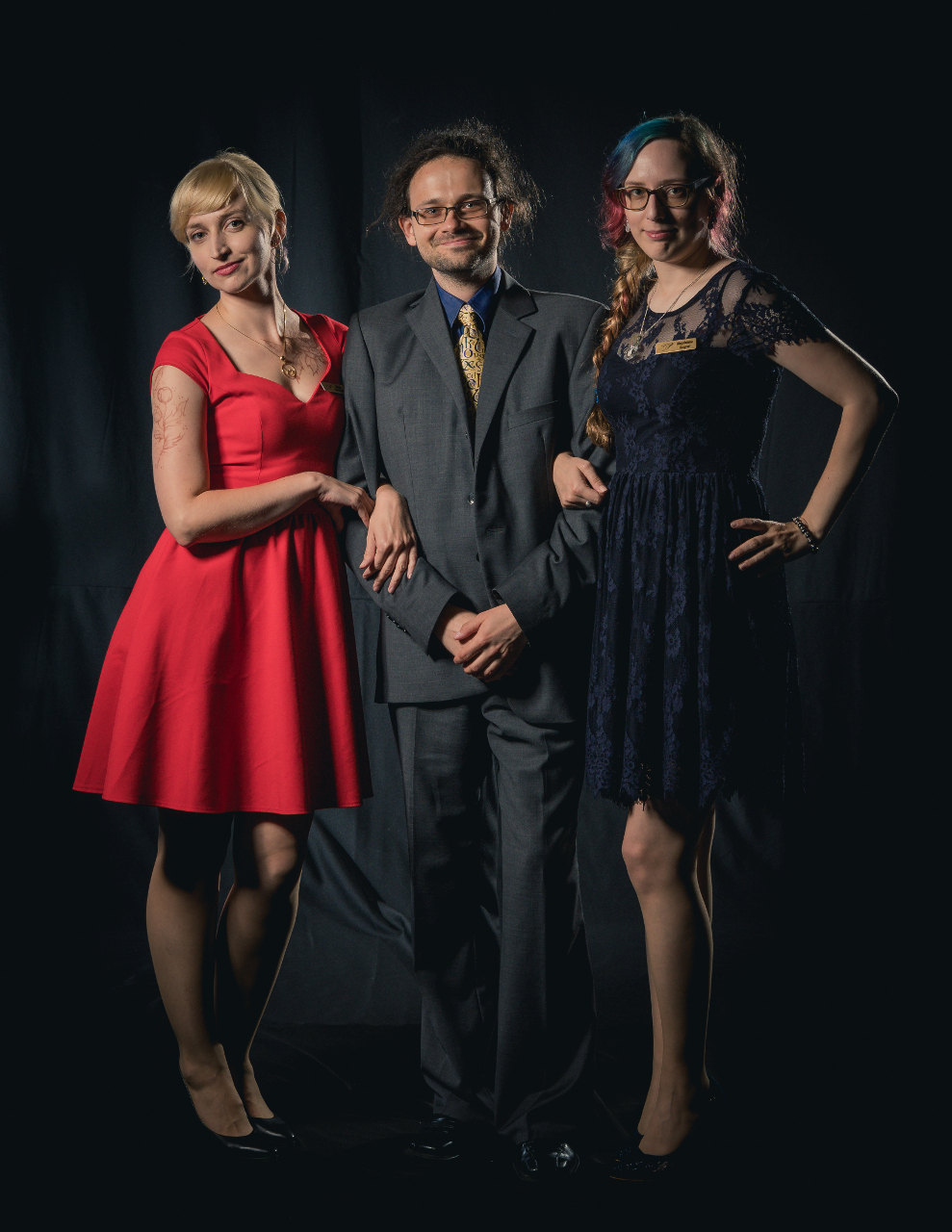 Picture taken during pre-Hugo reception. Picture was made by Henry Söderlund

It is funny but I do not remember too much of the ceremony itself. We were presenting the award for the Best Fancast. It was one of the first awards presented and we were on the stage almost from the beginning. Before announcing the winners Marta greeted her dad who was in the audience. „Our” winners were Emma Newman and Peter Newman for their Fancast – Tea and Jeopardy. It was Marta who was supposed to hand out the rocket but as there were two rockets, I handed the second one. 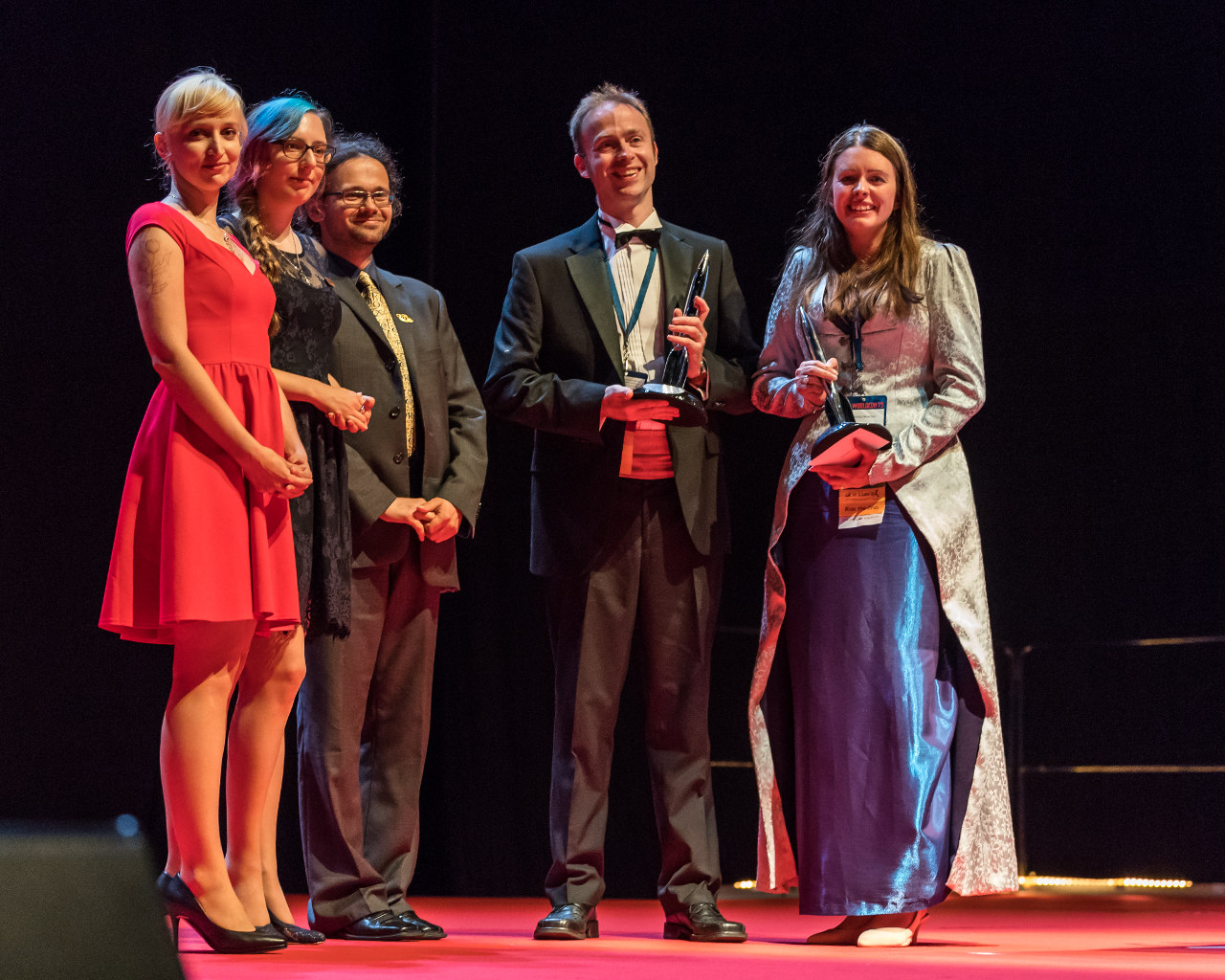 Hugo Award for the best Fancast went to Emma Newman and Peter Newman for Tea and Jeopardy. Picture was made by Henry Söderlund

Afterwards, other awards were presented and we were waiting to say few words about Slaski Klub Fantastyki (Silesian SF&F club), and just before leaving the stage, we had a pleasure to sing Happy Birthday (in Polish) to Magdalena, who celebrated her birthday during Worldcon 75. 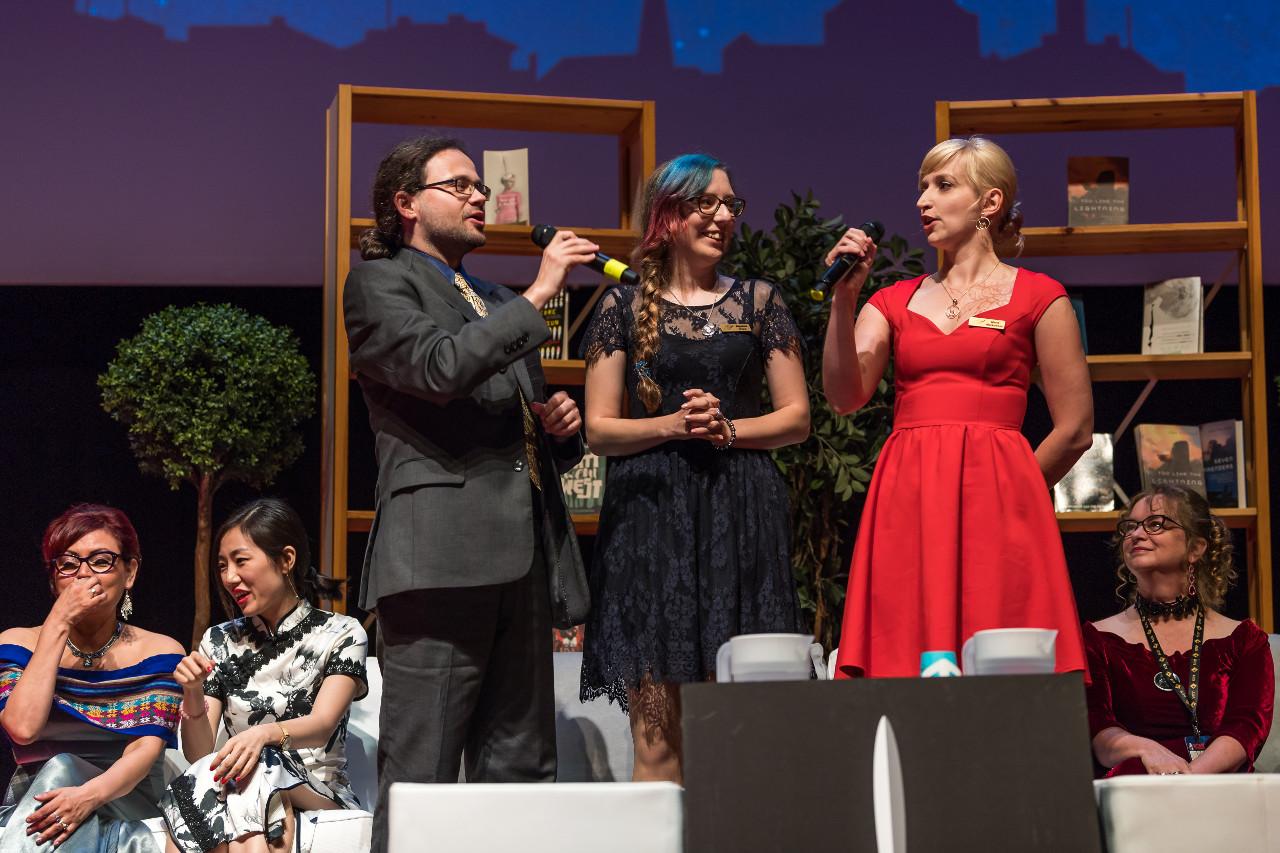 Marta and myself singing Happy Birthday to Magda. Picture was made by Henry Söderlund

The rest of the ceremony I have spent on the audience. There was a lot of emotions during that day. I was terrified, happy and excited – all at the same time. During the rest of the cermony I was taking pictures. I was extremely happy to see that Carolina Gómez Lagerlöf received the Big Heart Award. She totally deserves it and I’m happy that it happened the year I was in attendance. One of the other moments I remember was Ursula Vernon speaking about whale fall during her acceptance speech. She did it with so much charisma that I think most of us in the audience were impressed. 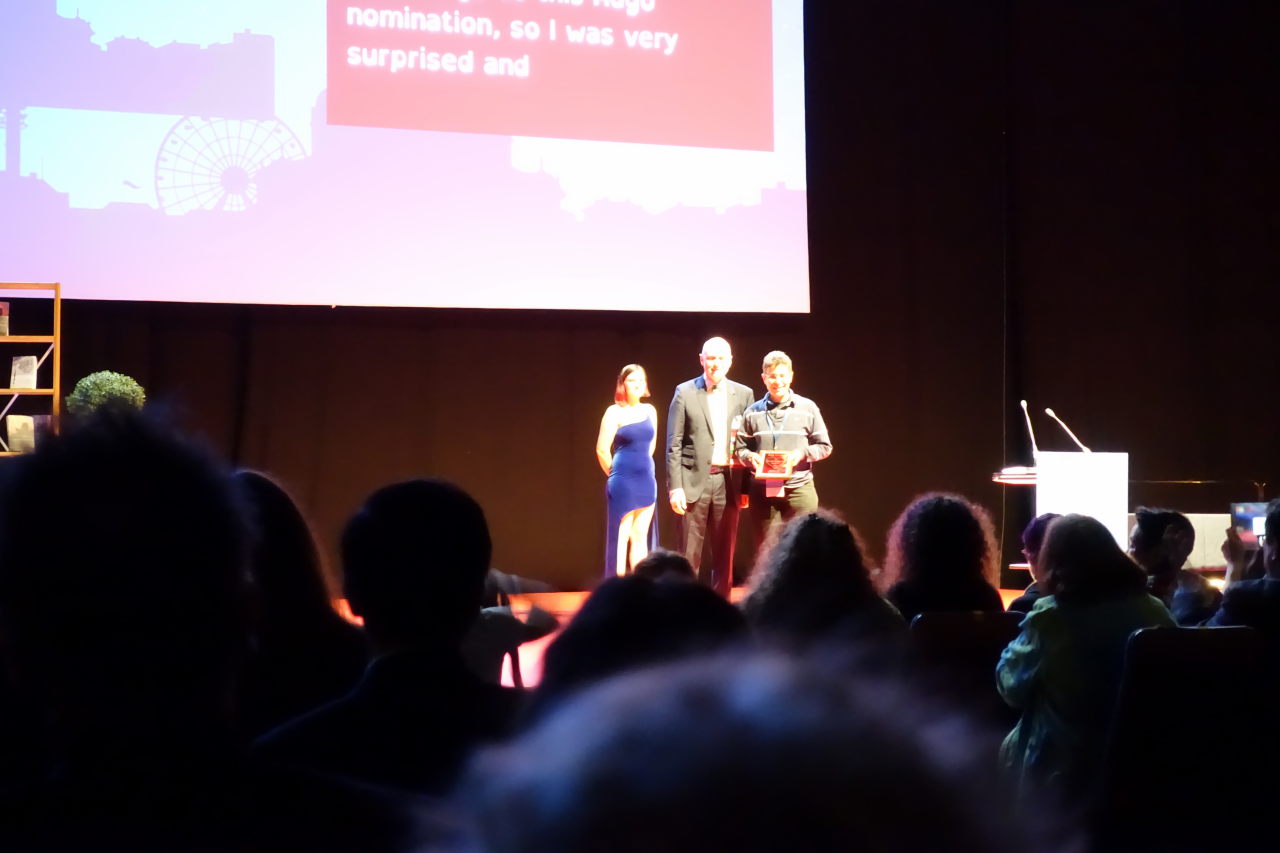 Just after the Hugo ceremony, my friends were asking me how it was. I was barely able to answer. All the emotions were still inside me. It was both marvelous and strange. Multiple times in my life I have seen people receiving awards and being barely able to speak or expressing extremely strong emotions. I was not really sure how it is possible to be so overwhelmed by emotions. And there it happened to me and I was not the one receiving the award – I was just presenting it. Still, this is the award I really care about and being able to somehow connect to it was really magical. Now I do understand all those people who are not able to speak calmly when giving their acceptance speeches.

And after the Hugo Award ceremony

During the rehearsal for the Hugo Award Ceremony I received an invitation for the Hugo Losers Party. Of course I was very happy. I was reading about the party several times yet I never imagined I could be there myself. And there I received the nicely printed postcard-like invitation. 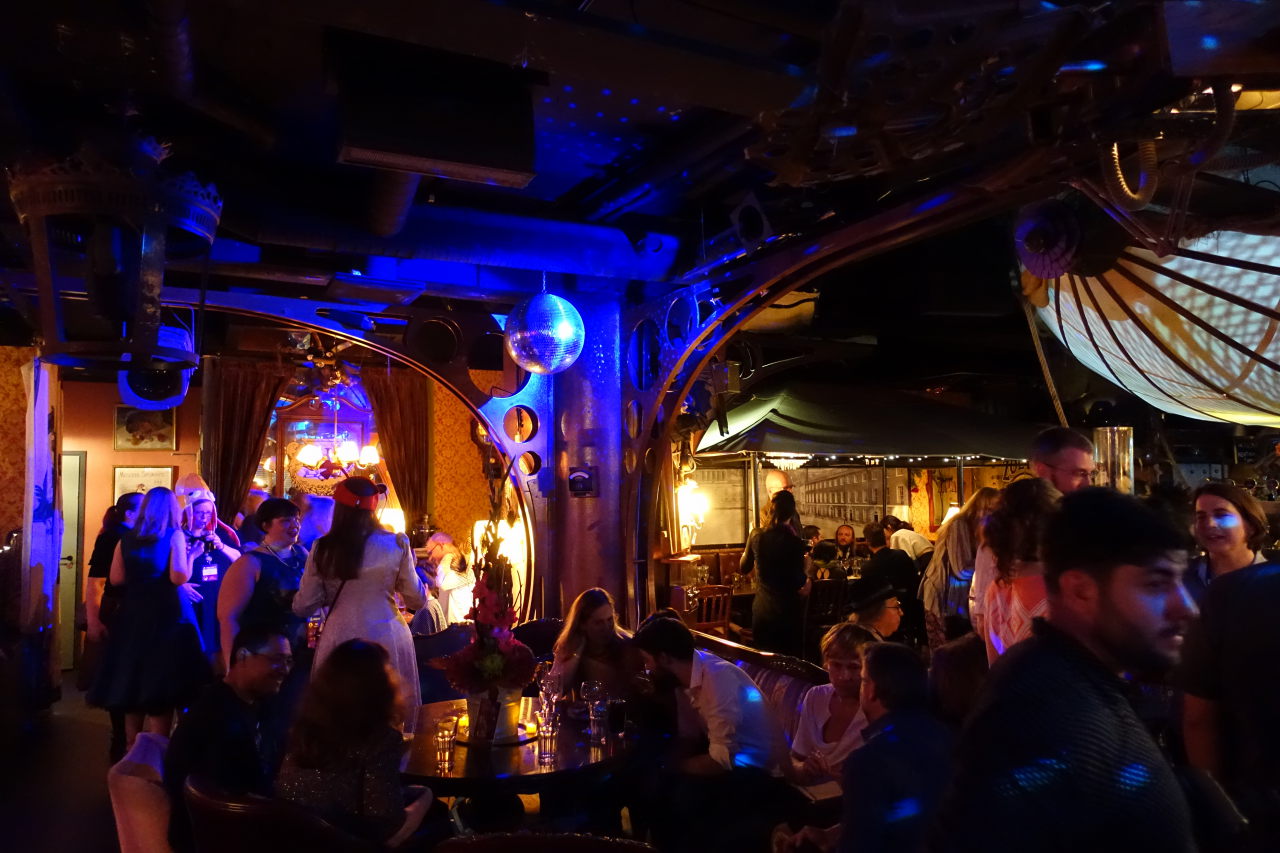 When the evening came, together with Marta (and her dad) and Magda (and her partner) we travelled to the city centre to get to the party. It was held in a Steam Helsinki bar, which is decorated in the steampunk style. When we arrived, the bar was already extremely crowded. I was really sure that the Hugo Losers Party is a small event and this one was maybe not huge, but it was definitely very, very crowded. 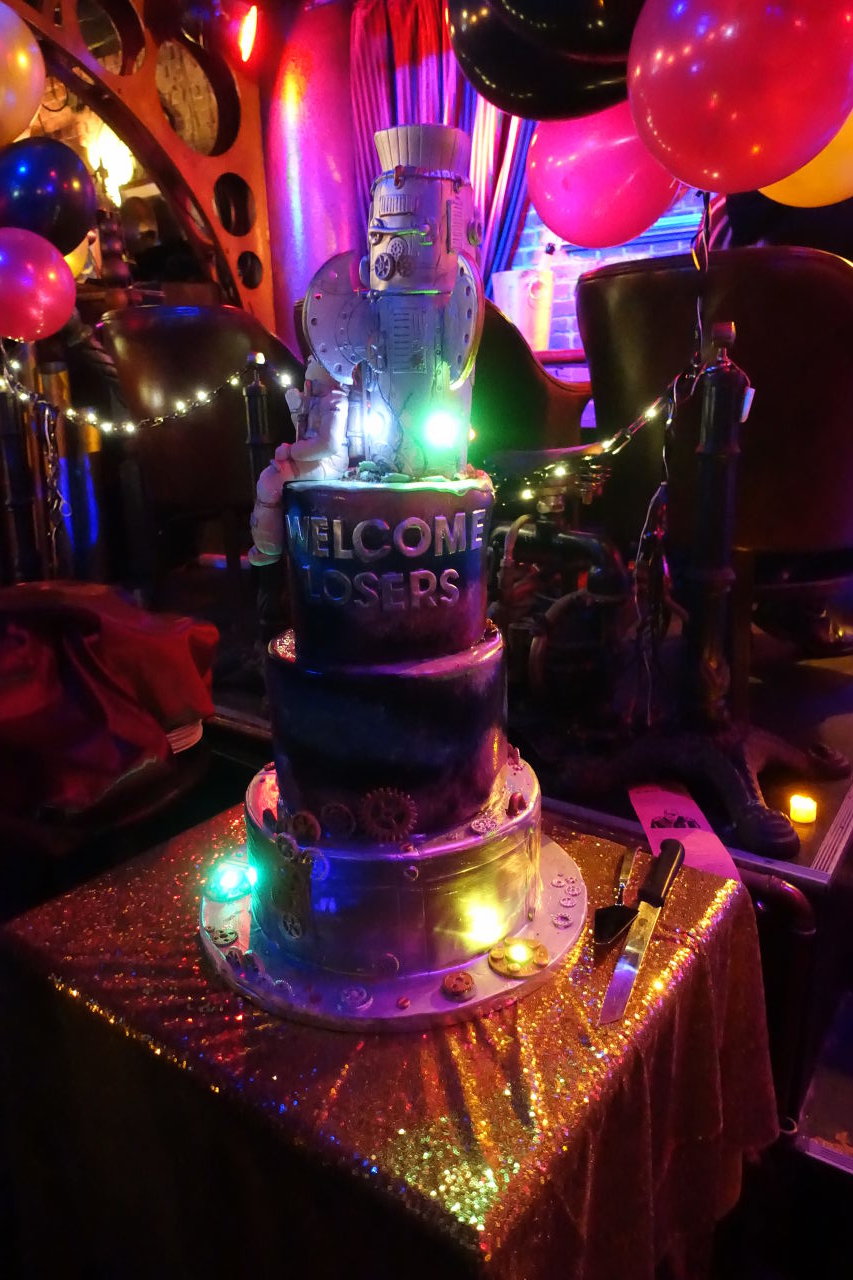 I didn’t stay the whole night at the party . Unfortunately, I am not a party animal and I prefer smaller events, where it is easier to talk to people. Still, what was cool was the atmosphere. It was nice and friendly and full of joy, I think.

So, the whole Hugo ceremony was like magic. I am extremely happy I was able to be a part of it.

My next post will be devoted to Tarcon it should be published on 26th September.