There are conventions which somehow appear as a “must visit” for me. This was the case for Arkhamer. It is a young event – the first one took place in 2015. It is not a very big con either, around 500 people visited it this year. Yet somehow, for a couple of years, I had this feeling that I needed to visit it. And this year, I finally did.

Decision to go to Arkhamer

Arkhamer is quite far away from Kraków, where I live. It does not take a full day to travel there, yet it takes a few hours to get to Kalisz, where the con is held. So, despite the fact that I wanted to go there, I had not done it last year. It would probably be similar this year, if not for one thing. At Polcon, I had my GUFF presentation just before the convention’s closing. The timing was not the best and I had just a few visitors at my presentation. My friend, who happens to be division head for Programme at Arkhamer, said that he can offer me a better timeslot there, providing I would like to come. And after some time I decided that I’ll manage to go. 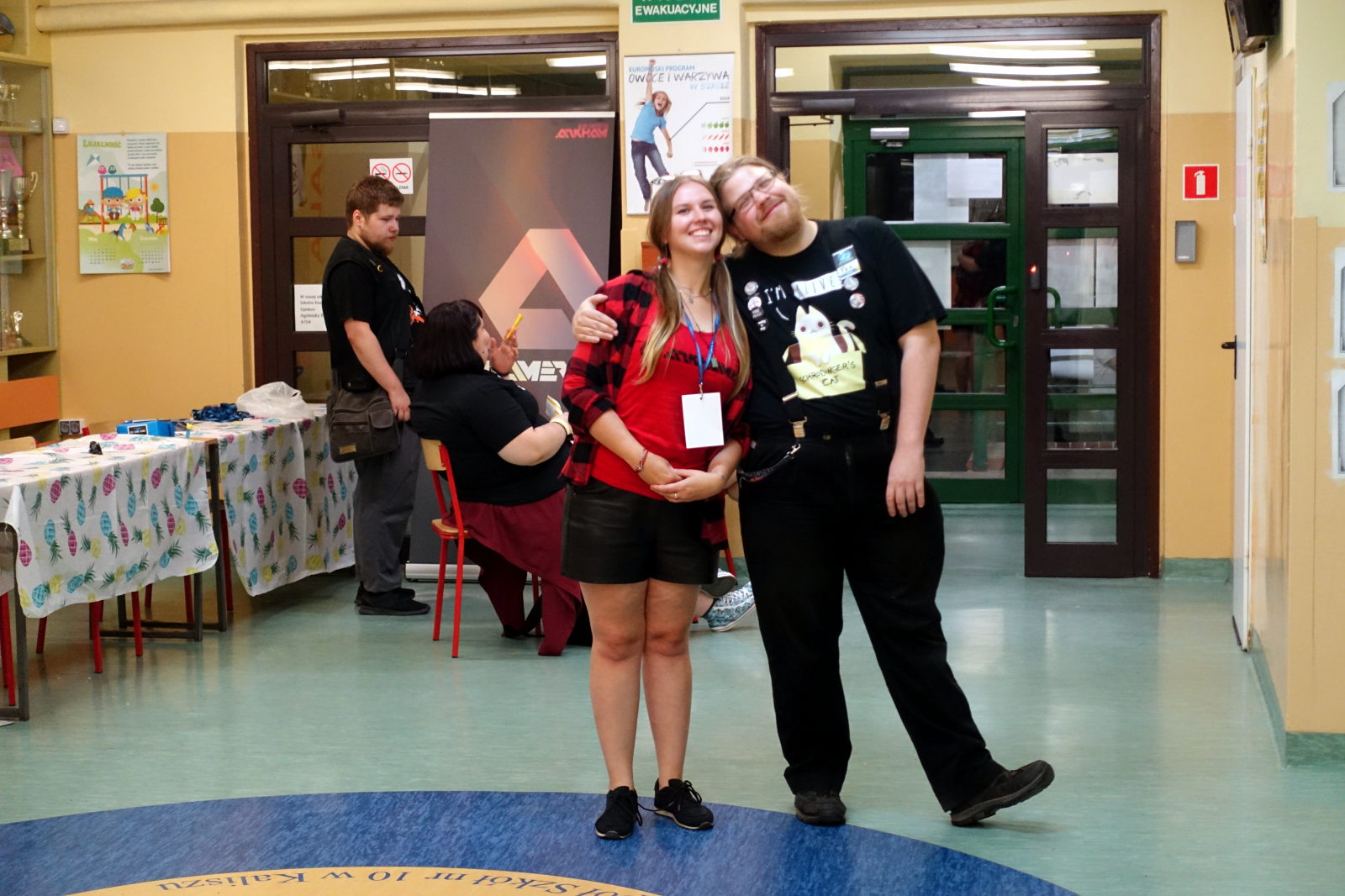 Convention chair posing to the picture with her friend.

A few loose thoughts on the programme

Arkhamer decided to borrow a little bit from TED talks. So there was one programme room devoted to short (30 minutes long) presentations on various topics. They called them “The Arkhamer Talks”. All in all, it turned out that there was not enough of such short talks, so other “standard” items were added there as well. Still, the idea of short talks is a good one. I had the chance to visit a few items there and it was really cool.

In fact, one of my items was an Arkhamer talk. I called it “Where, if not in Poland?”. I was talking about the reasons to visit conventions in different countries and whether it was worth your time. As you already know by now, if you are reading my blog, I have quite a strict opinion on this topic. Yet I tried to be objective and show that it might not be a good idea for everyone. 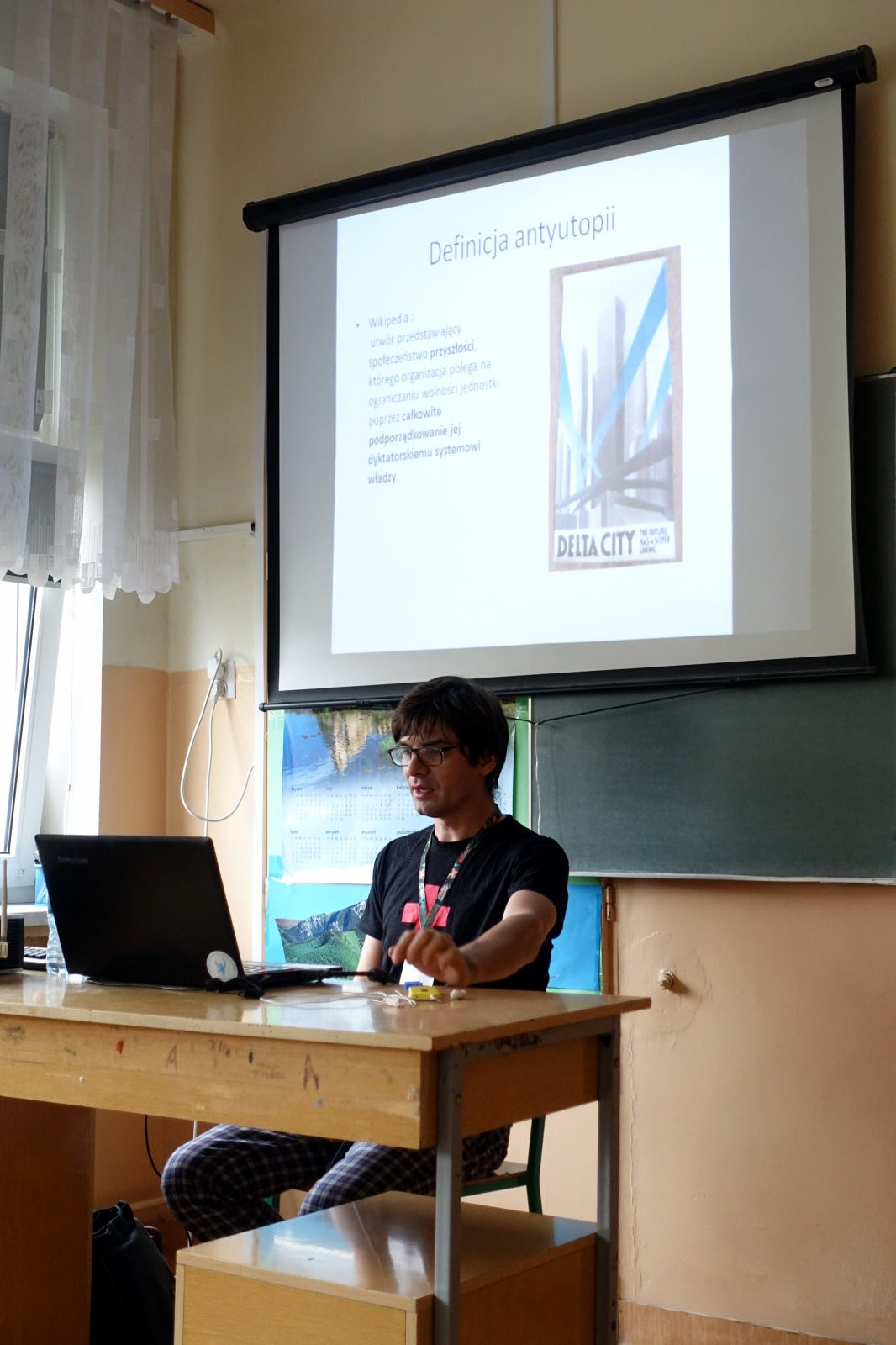 One of the Arkhamer talks

My second item was, as I already mentioned, devoted to my GUFF trip. One thing I really enjoy about it is that when I talk about the trip and when I show the pictures, all the memories come back to me. It is almost as if I was repeating the trip itself.

As I mentioned earlier, Arkhamer is a relatively small convention and international fandom is not the most interesting topic, so both my items were not very popular. Still, a few people came to listen what I had to tell. I think it is important to share my love to fandom “elsewhere” and to keep telling people about Fan Funds. Maybe I won’t have too many people visiting each of my items, but at least the idea is being spread. I hope that, in some time, we will see more Poles travelling to conventions all around Europe (or even around the world!). 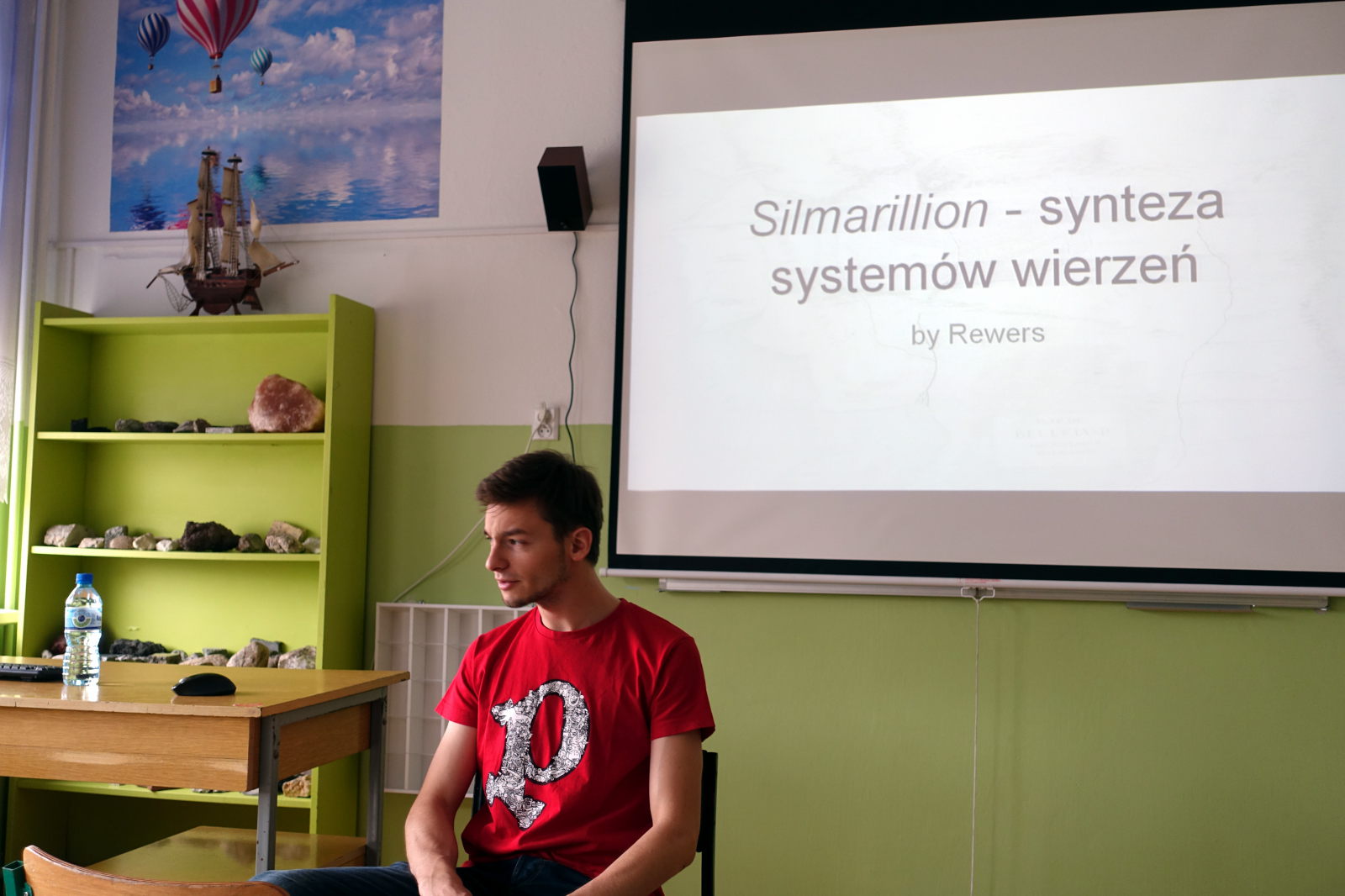 One of the programme items on Saturday morning.

One of my flaws is that I rarely read the whole programme book. I tend to look only at programme items and their descriptions (the latter even not always). This is why sometimes Irealize, much too late, that something cool is happening at the con. At Arkhamer, I missed the information about the convention game. Fortunately, when I was talking to someone at the Registration desk, the information was revealed to me and I was able to join it. 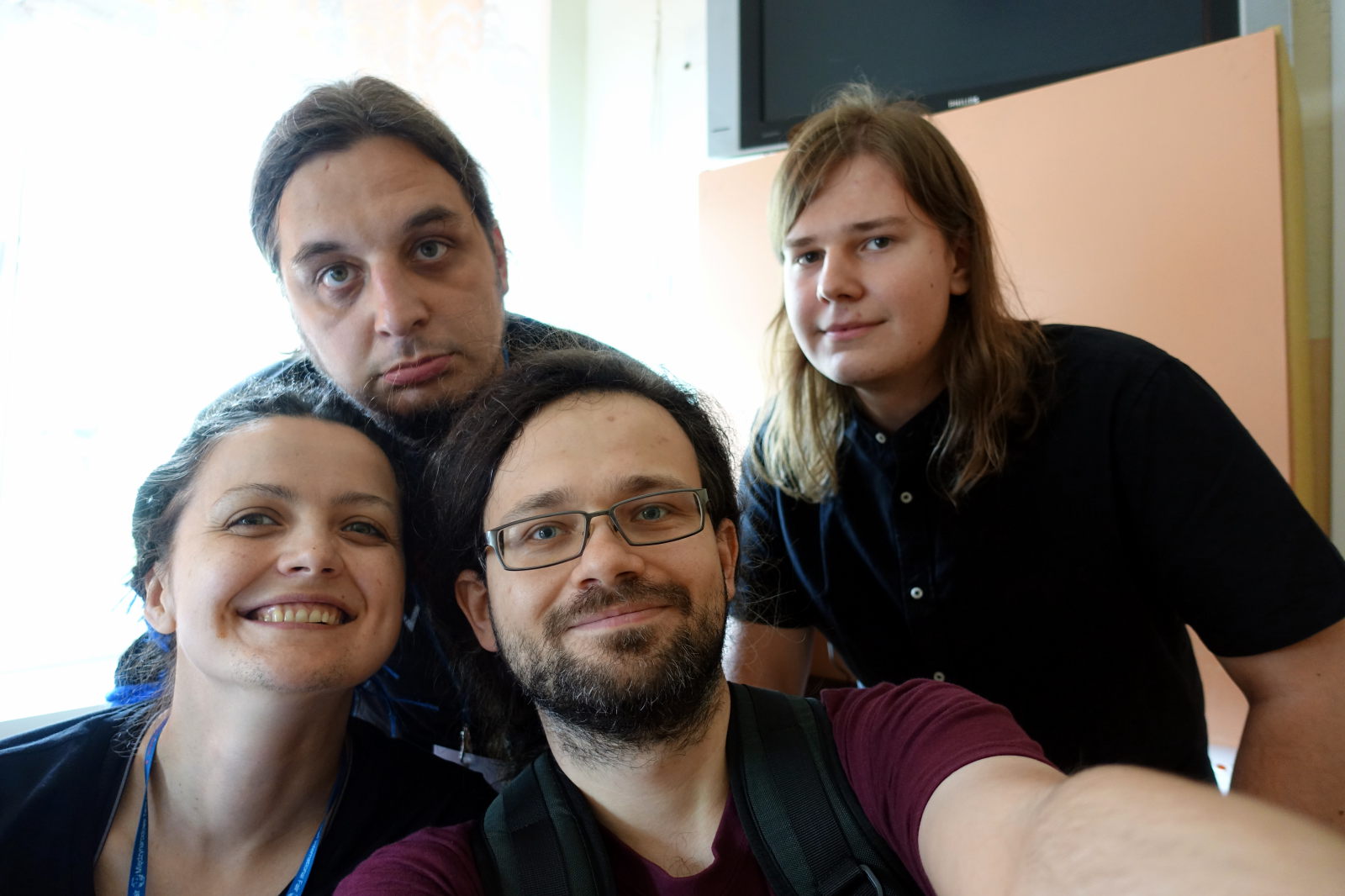 The game was really cool. It contained some riddles that one had to solve to be able to go to the next checkpoint, where he or she had another task to fulfil and then, there was the next riddle waiting… All in all the, idea was that you were kept in an asylum and you had to escape from there. The tasks basically required you to participate in the convention. I had to go to Games Room and play a game there, then I had to go to the Art Corner and create a disguise allowing me to leave the asylum. Then I had to perform some tasks that required me to participate in some programme items. This was really cool and I enjoyed my time immensely.

There were, however, some weaknesses in the game design. I talked about them to the organizer and I am confident those will be resolved next year. The main flaw was that the game was won by the person (or group) who would finish all the tasks in the shortest time. This means that depending on when you started, you were in better or worse position to win it. Yet, as I mentioned before, I really loved the game and I am happy I was told about it. 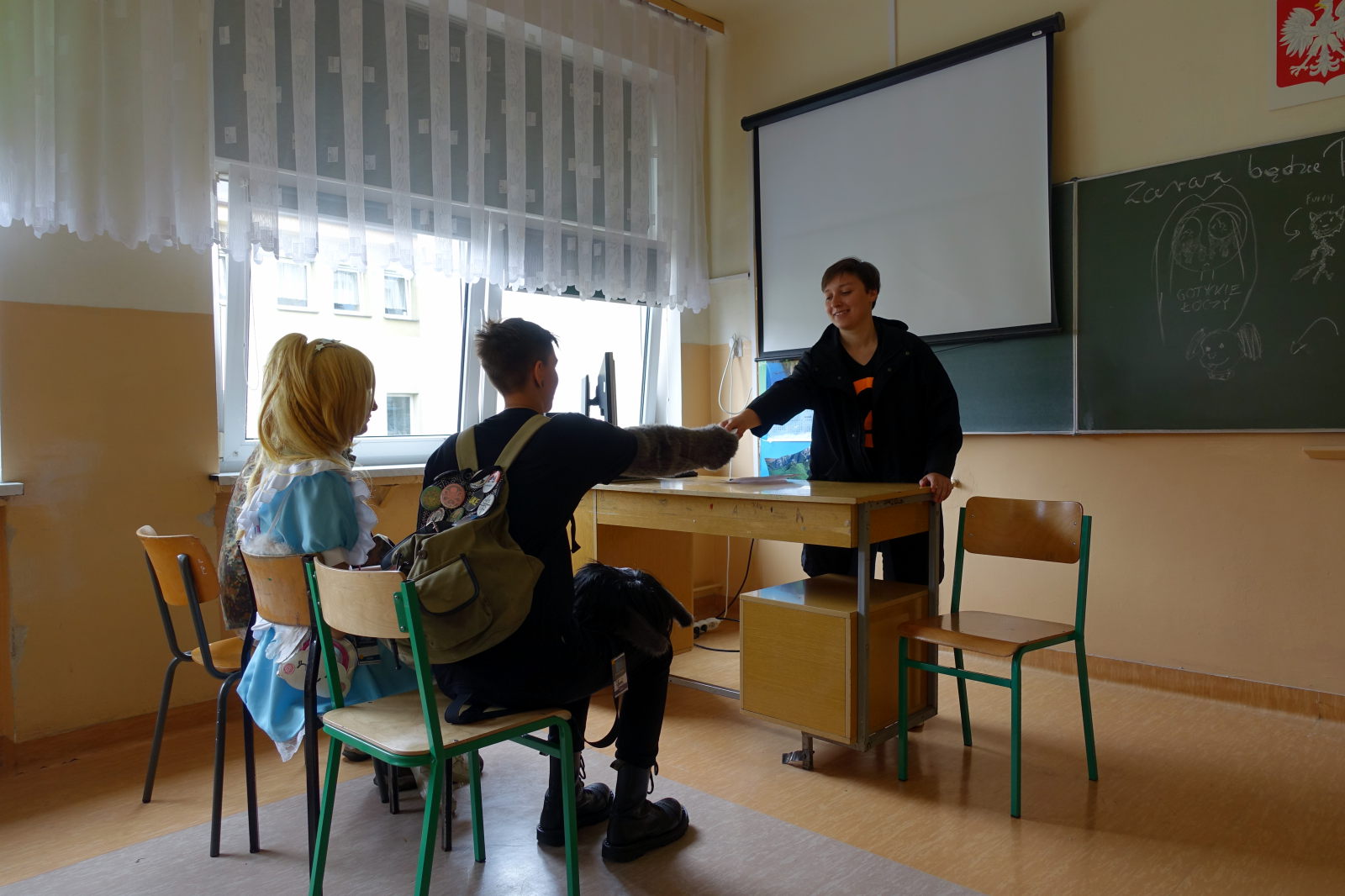 Convention game’s organiser presents the award to one of the winning teams.

A friend of mine, who was the division head for programme, really loves the RPG. One of the things he decided to have at Arkhamer, was the RPG Reading Room. He took a lot of his RPG books and organized other people to bring theirs and thanks to that we had a room full of RPGs. I didn’t have time to read them, but I decided to take a look on what was inside. 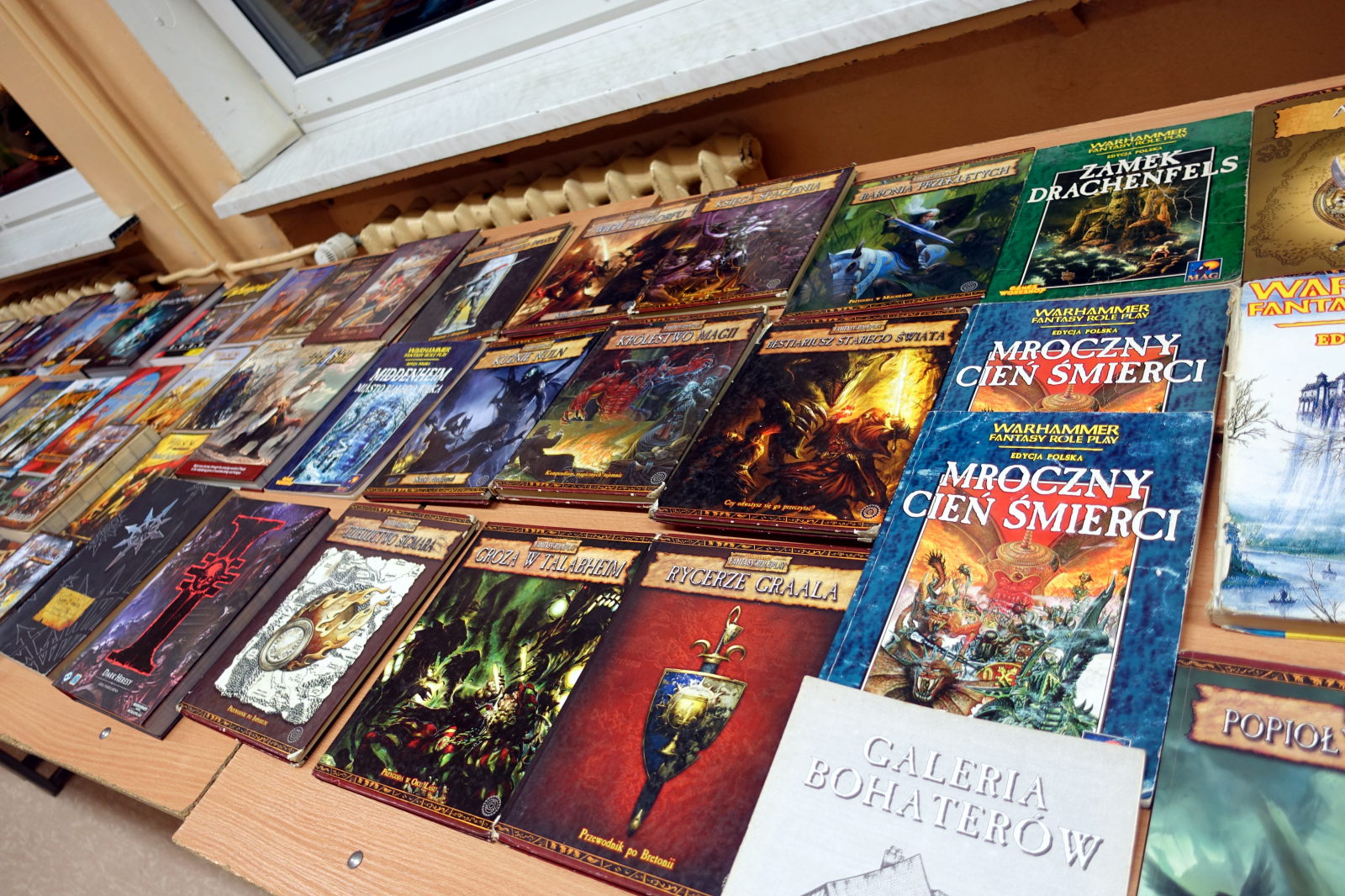 Part of the RPG reading room

There was a large variety of games. Starting with the second Polish RPG – Oko Yrrhedesa (Yrrhedes’ Eye) and going through WFRP (the 1st and 2nd edition) up to the relatively newer games. I saw some people reading the books there. I am not sure whether this was the optimal usage of space, but it was definitely an interesting thing. It is both a good reading place and an interesting exhibit. 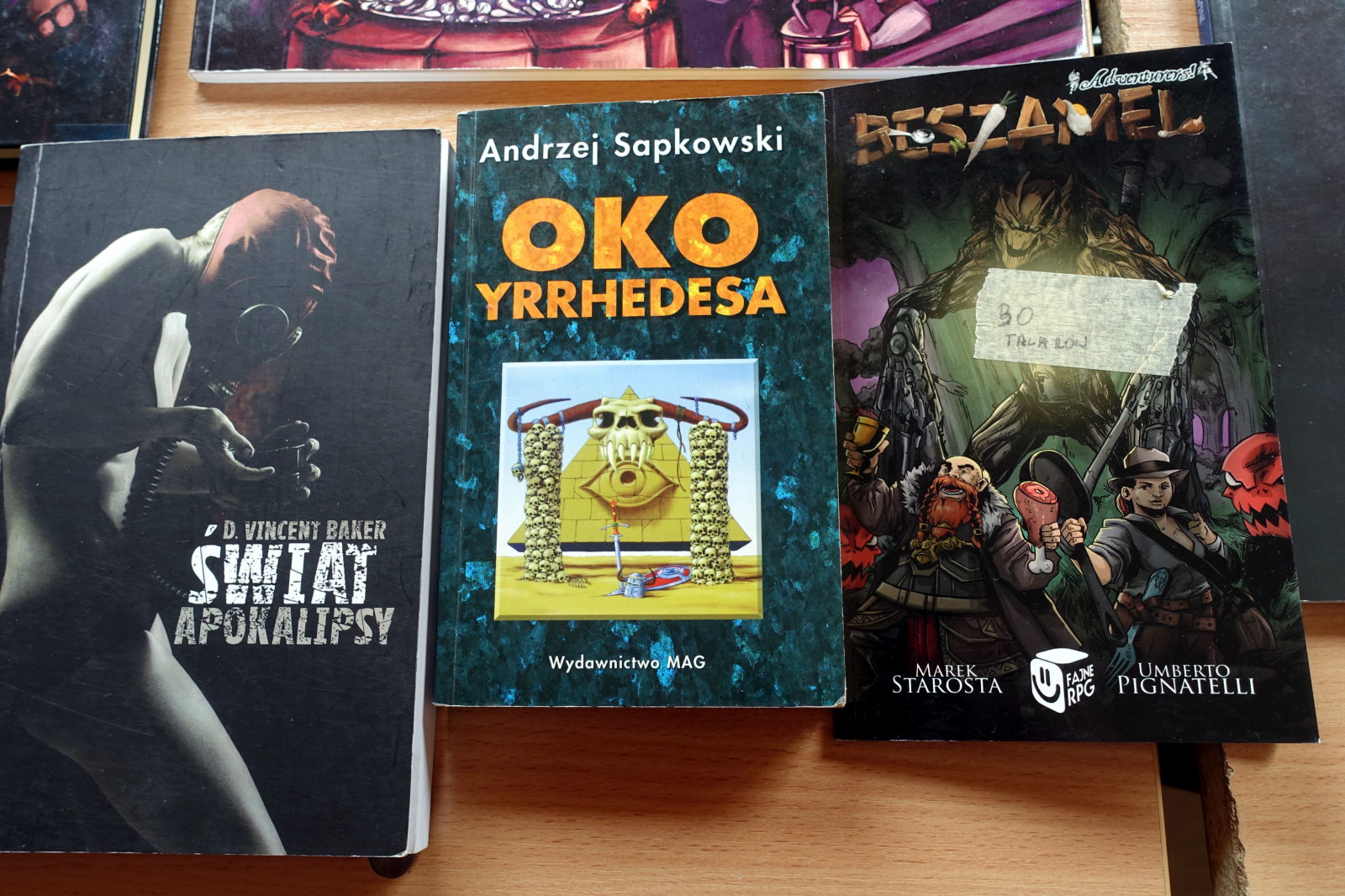 Oko Yrrhedesa by Andrzej Sapkowski was a second Polish RPG.

A local TV station visited the con. This is nice, as it gives possibility to promote our hobby. I am not sure if and when the recording would be published. After the chair gave an interview, she asked me whether I could also tell a few words from the member’s perspective. I agreed, and the interview started, and, well… it was a little bit awkward. It seems that the journalist had no real idea about what SFF is, so one of the first questions I received was whether SFF is a way of escaping from real world problems and right afterwards I was asked whether I am not mixing SFF with reality… This was really a shock for me. I really hoped that with SFF coming into mainstream those type of questions would disappear but – it seems sometimes they still happen. 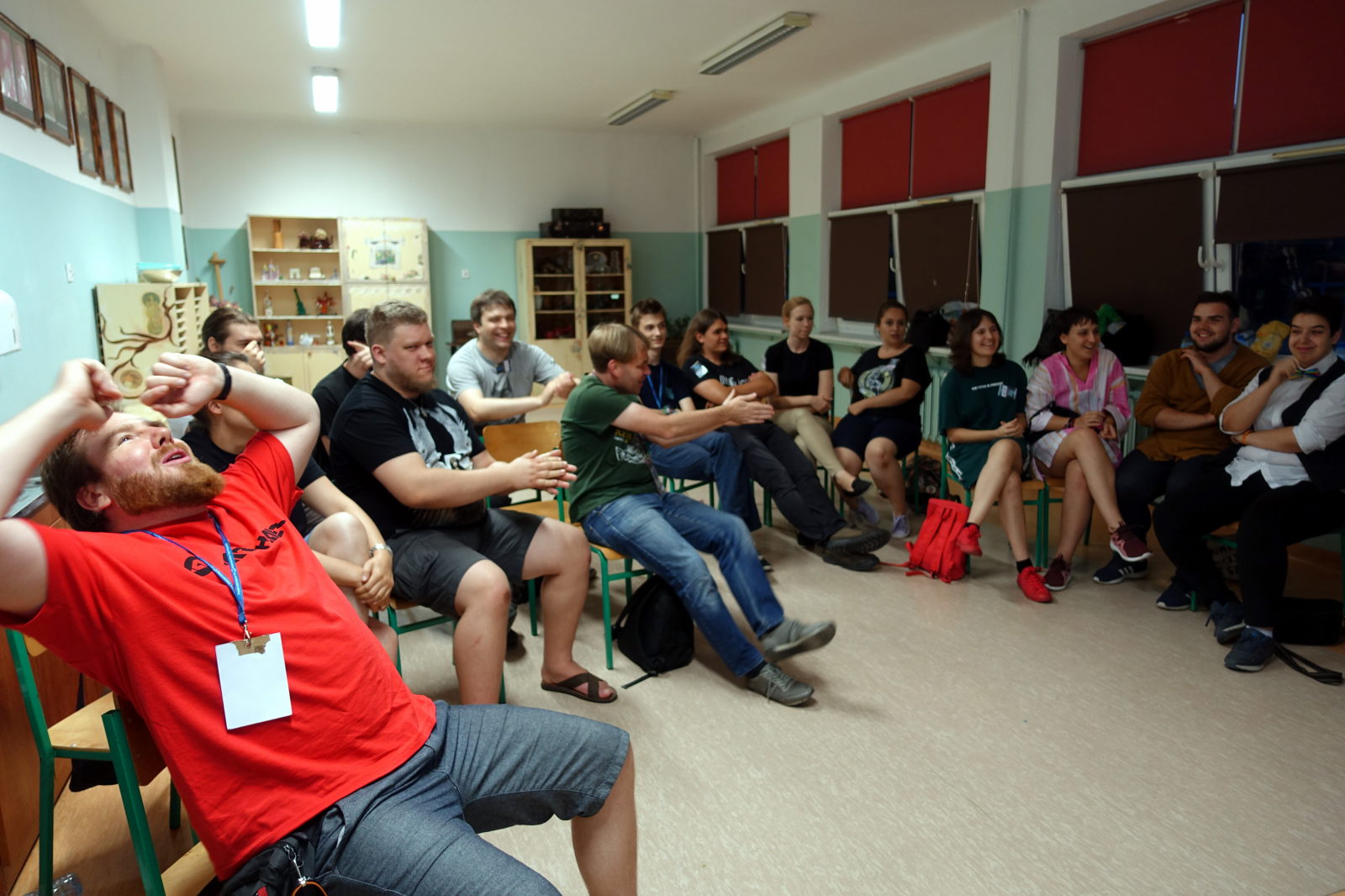 I don’t have any pictures from the interview so I am adding this one showing one of the competitions.

And then the convention was over

I spent my first night in a big sleeping room where it was a little bit too hot (weather was definitely too warm). The second night I spent in a smaller room and it was slightly better yet I didn’t get enough sleep on both nights. And therefore, I was quite sleepy on Sunday. Still I think that it was worth it. Apart from being able to spend nice time at the con, I’dwon some convention currency* that I used to buy books afterwards. I also wanted to obtain collector’s edition of The Battle of the Five Armies with a great Weta collectible statue, but to do this, I had to use all my remaining convention currency and pay the rest with real money. Yet I am so happy I managed to get the statue!

And this is all for Arkhamer. Now I need to think whether I’ll manage to visit it next year.

*Convention currency is used at Polish cons instead of older prizing method. Whenever you win a competition/tournament etc. instead of getting a book (or other prize) you receive some coupons. They can be exchanged at certain place for the prizes. This way you’ll not get a book you already have. Or you can participate in a few competitions and receive one bigger item.

My next post will be about Lemcon and will be published on September 18th.