Last year I haven’t been to whole Lemcon as I had another convention the same weekend. This year I promised myself I would be at the con organized by my club. And I kept my word. Yet, when I had been preparing it, I did not expect what would happen.

Why I cannot write the proper report

Usually, when writing a report, I am evaluating what went well and what didn’t. This time, I cannot do that, becauseI was chairing Lemcon. In the beginning, this was not a part of the plan. I was supposed to take care of a certain part of the con and, as it is a small and short event (less than 200 members, one day long), it usually does not include a lot of responsibilities. Still, it happened that the chair was not able to take care of the con and I had to step in. 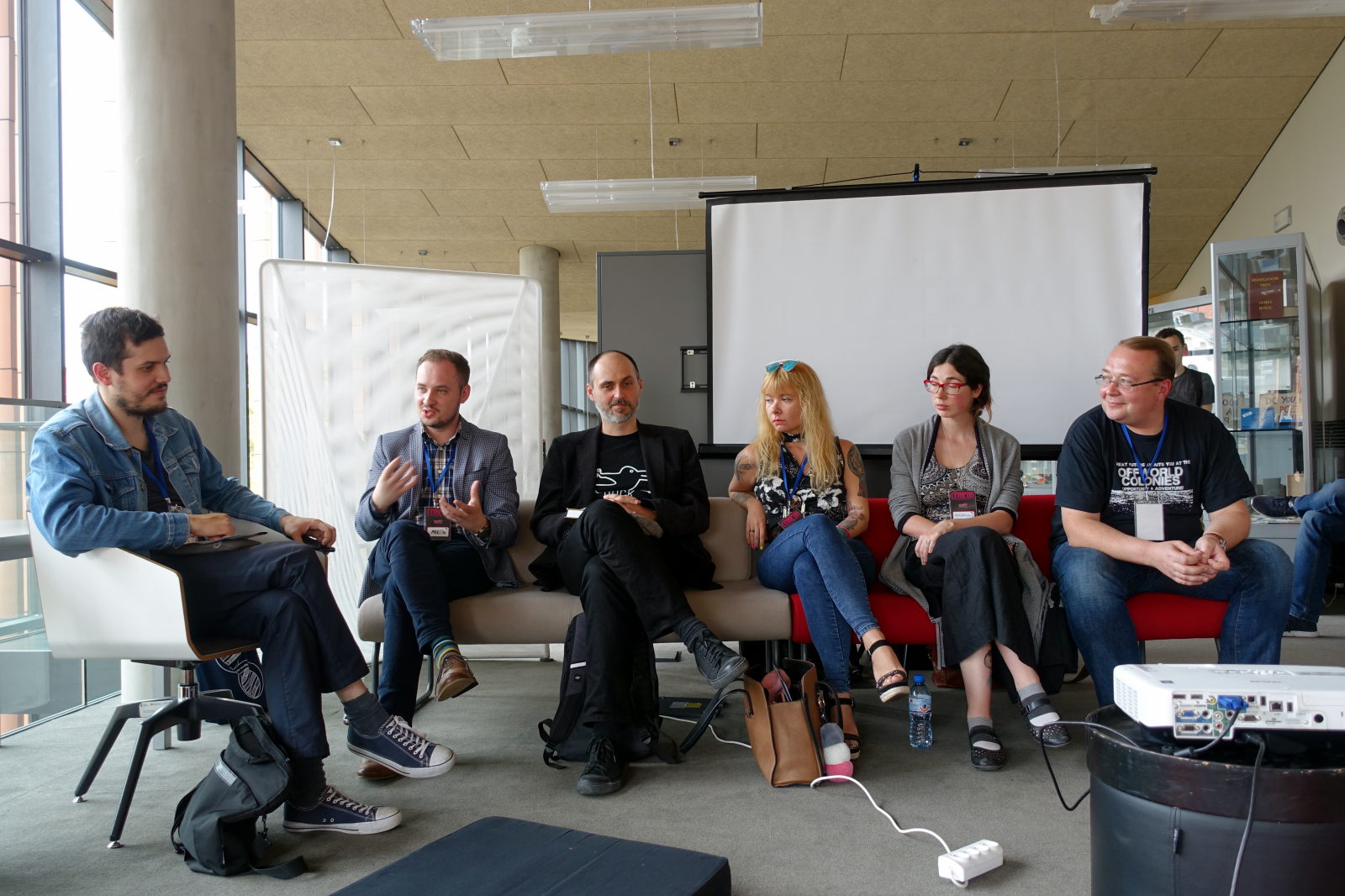 One of the panel discussions.

It was a difficult time as we were relatively close to the con and I had to take over from one day to another. It was quite stressful and I am sure that because of that I made some mistakes that I would probably not make (I hope), if I were chairing it from the beginning. Yet, thanks to the hard work of the team and my predecessor (including the work done last year), we managed to prepare the convention.

From the very beginning I knew that I would be responsible for the exhibition. A year ago, we had an art exhibition of works by an artist from Kraków who made a series of graphics inspired by Lem’s works. I knew we needed something new this year as I didn’t want to repeat what was presented before. Autun Purser’s works directed my thoughts towards book covers. And, all in all, I got the idea to present the covers of Lem’s books from different countries. 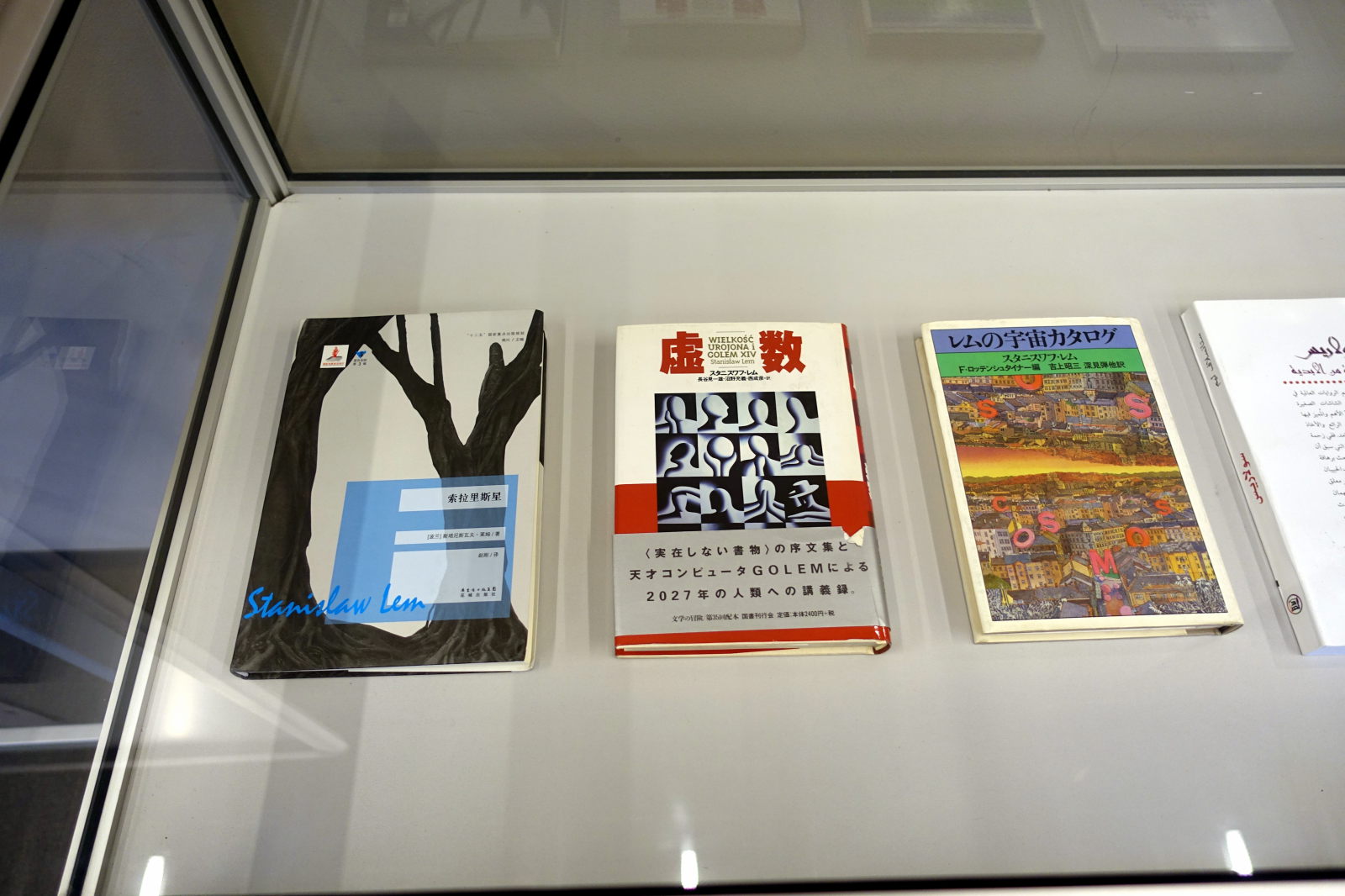 We had a book from China and two books from Japan.

It was quite late when I realized I forgot to have a name for the exhibition. I kept thinking about it as “foreign editions of Lem’s books” which explains quite well the contents of the exhibition, but it was not a catchy name. And, suddenly, I invented the name we finally used – “Translems” and then we added a subtitle – “Particles transporting memetic resources of Lem’s work into the world”. 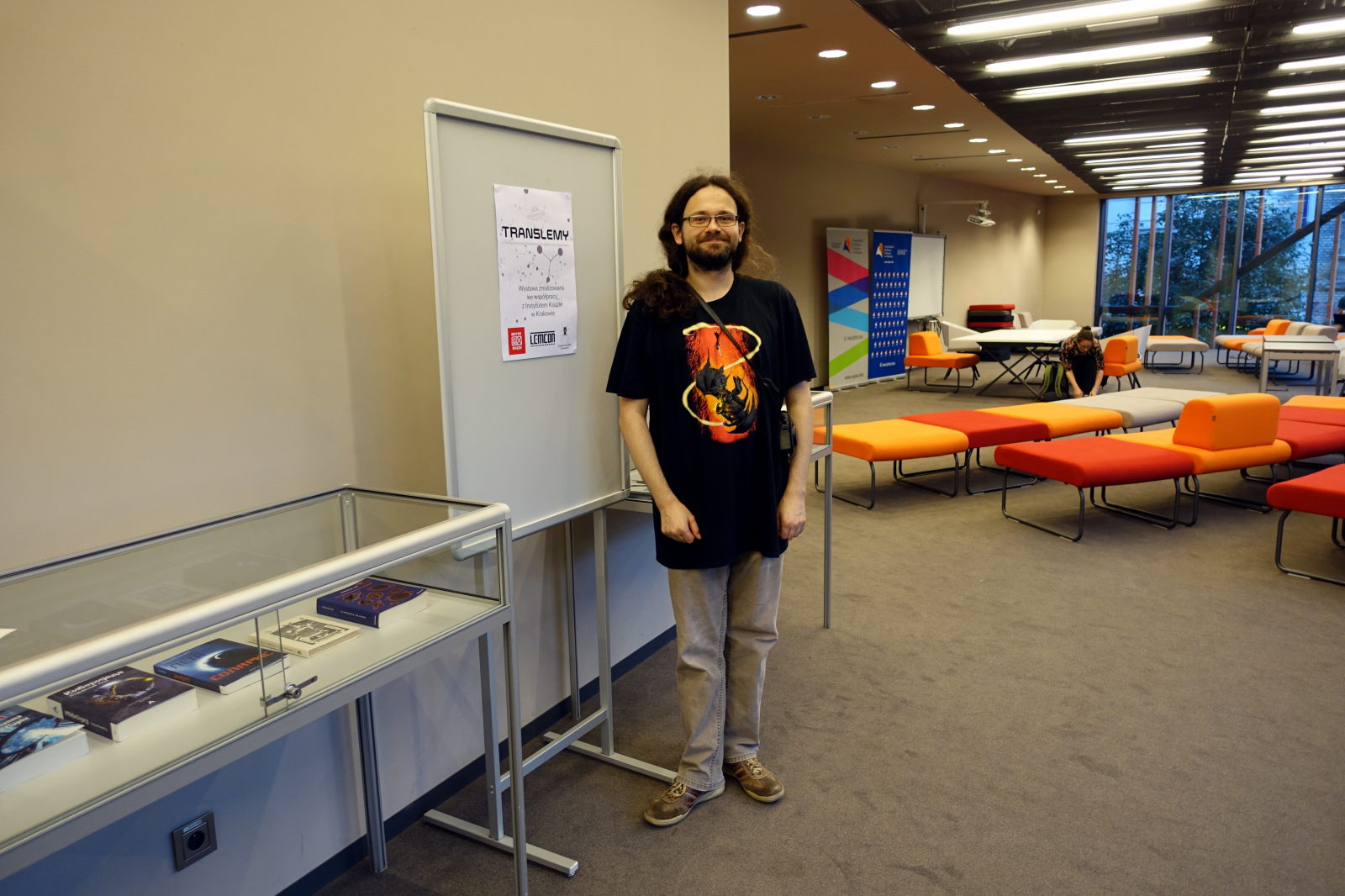 I was really happy that we managed to prepare the exhibition. Here I am posing a day before the con.

Thanks to Instytut Książki (The Book Institute, the Polish national institution for promoting books and reading as well as promoting Polish books all around the world) we managed to prepare the exhibition. They lent us twenty seven books in twenty three different languages. It was more than I expected. I had hoped for receiving a dozen of English books and maybe a few more books in other languages. And here we had editions from so many countries. Putting the books in the showcases and deciding how to arrange them was so much fun!

In the beginning, we had some issues with finding enough programme participants who would like to talk about Lem or SF in general. I am not sure why this is the case as usually there is more people willing to become programme participants. All in all, we managed to create a programme. I won’t try to judge it – I hope our members enjoyed it. What I can say is that it was maybe a little bit too academic to appeal to everyone. 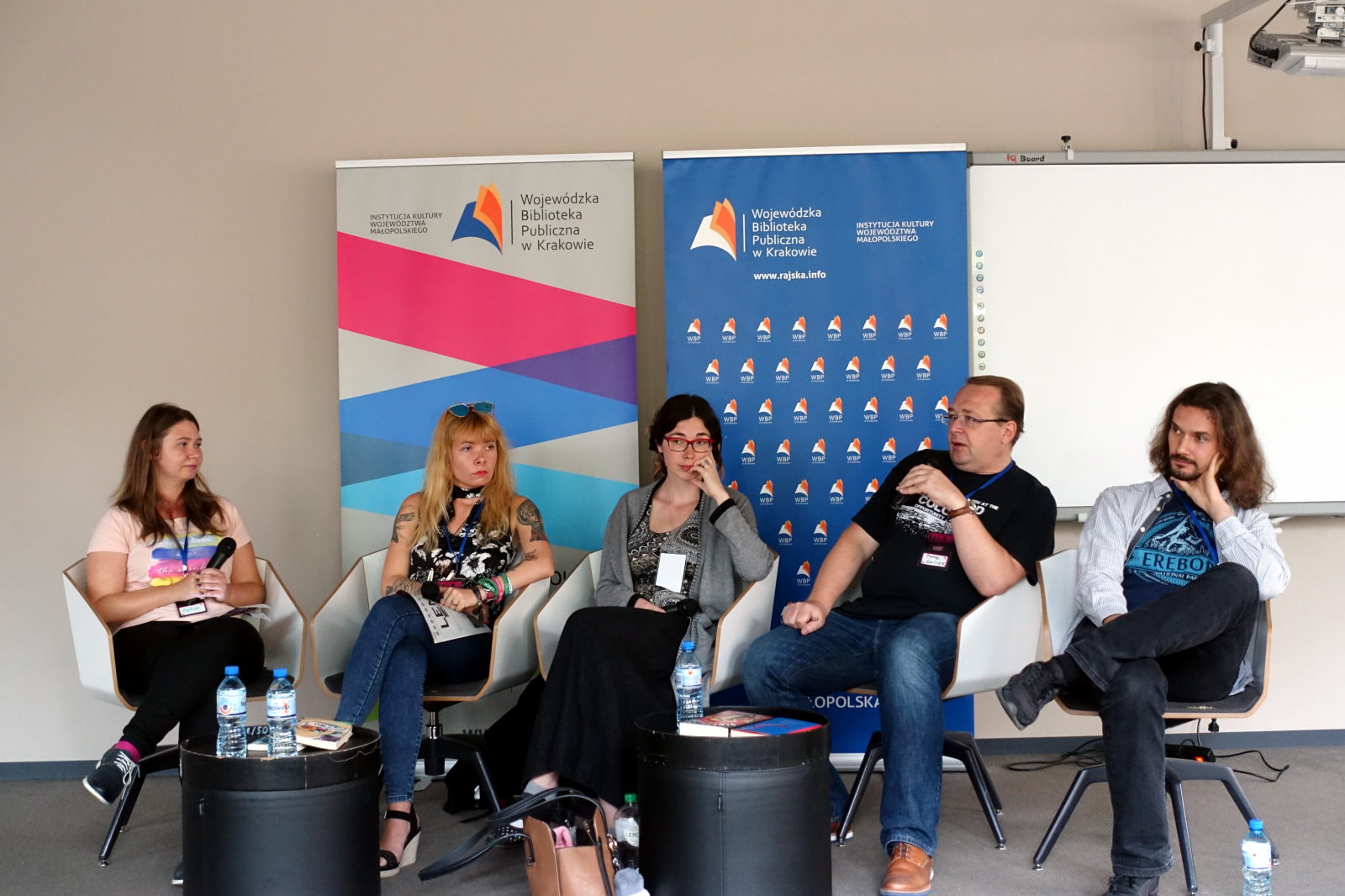 Another panel discussion with invited guests.

I have mixed feelings about the item I prepared myself. When I proposed it, I expected that this event may encourage new people to join the fandom. So I wanted to show them what it means to be a member of the fandom and what conventions are. I prepared a short presentation, around 30 minutes, for all the first-timers at the con. When the time came to give a talk, I was disappointed as there was no one there to listen to my presentation. Someone appeared after a few minutes, but this was not a big audience. I don’t have any issues when it comes to giving a talk for smaller audiences, even for one person. Yet, I am a little bit sad that most of the first time con visitors were not interested in learning the fandom way. I need to think if there is some other way I can present the fandom to people from outside of its circles. 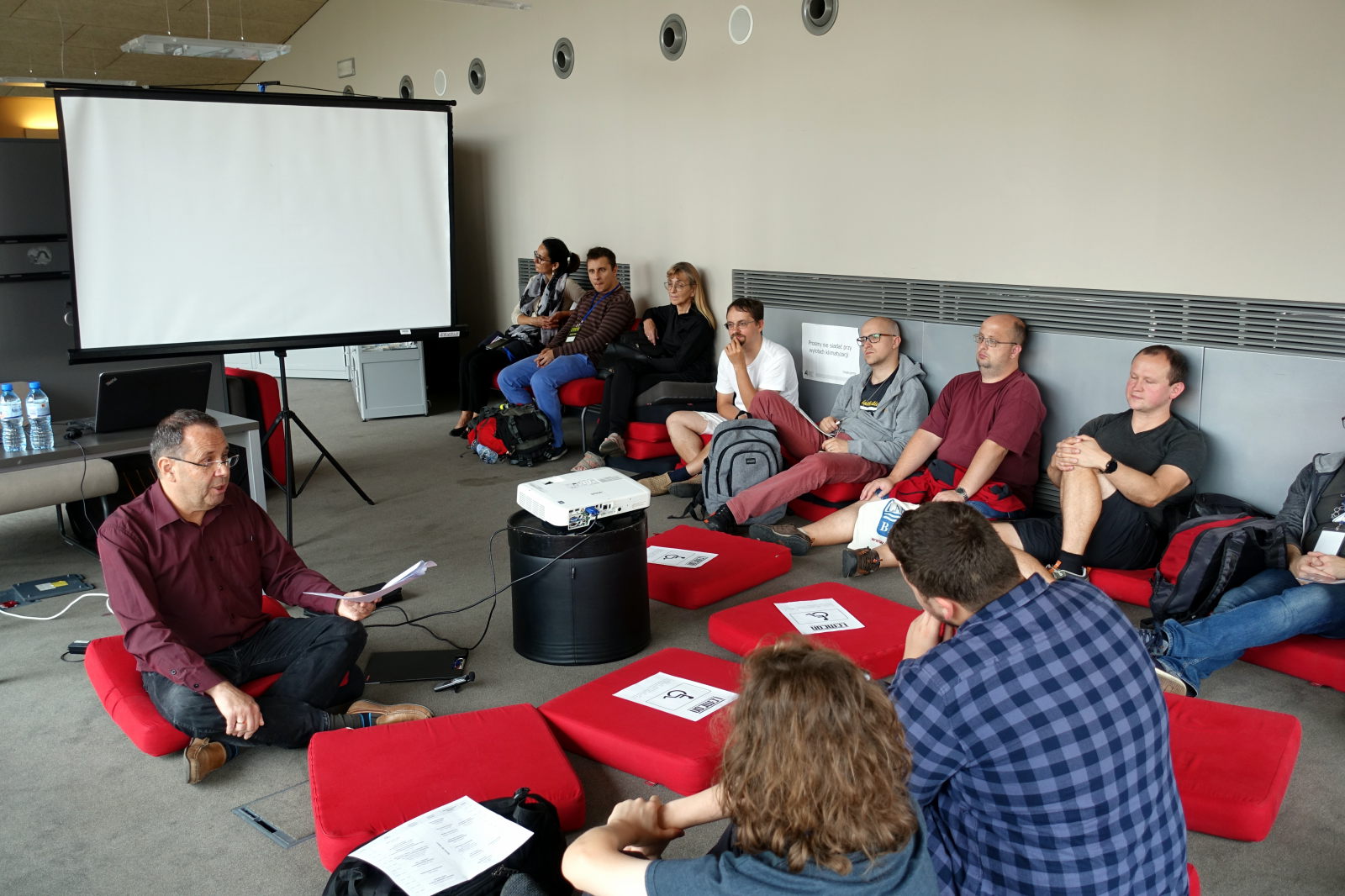 I won’t try to give a mark to convention that I happened to chair. I hope that it was interesting for the attendees (and I received a few kind words about it already). Looking at the event from the inside, I can see where we made some mistakes and I can only hope that they didn’t spoil the fun for the members. 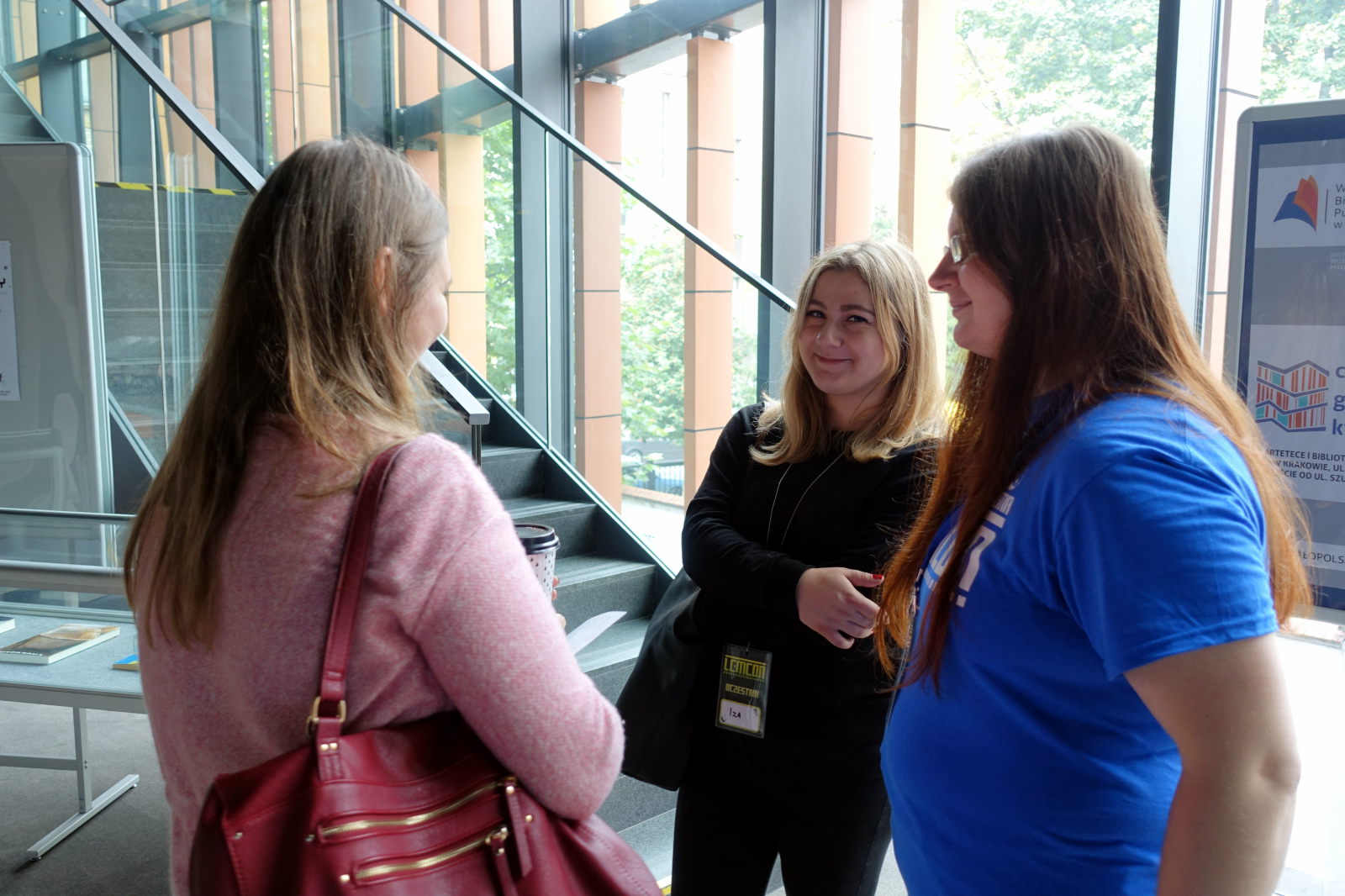 I hope this smile means that the con was good 🙂

My next post will be about Copernicon and will be published on September 27th.