It is hard to believe that ten years have already passed since the first Cafecon. It is (or was?) not a convention. Instead it was thought as a meeting for local manga & anime fans community in Kraków. In its time it was hugely popular and was held quite regularly. Over the course of years the cafes changed, but the atmosphere remained. In the last few years it disappeared and now it takes place quite rarely.

The remembrance of good old times

I do recall when the “young” M&A fans from Kraków decided they would do something new – and they invented Cafecon. I am not sure whether I attended the first one or not. Yet, the idea was great and people would come regularly to the Cafecons for a few years They were held multiple times a year and it was always a good occasion to meet with friends.

In the beginning, Cafecons were moving from one cafe/bar/pub to the other, but finally it was held in Kawiarnia Naukowa (loosely translated as Scientific Cafe). We held meetings there for, I believe, three years or so. When I think about Cafecon, I do think about Kawiarnia Naukowa and the extremely nice staff that worked there. I regret that this place is now closed. 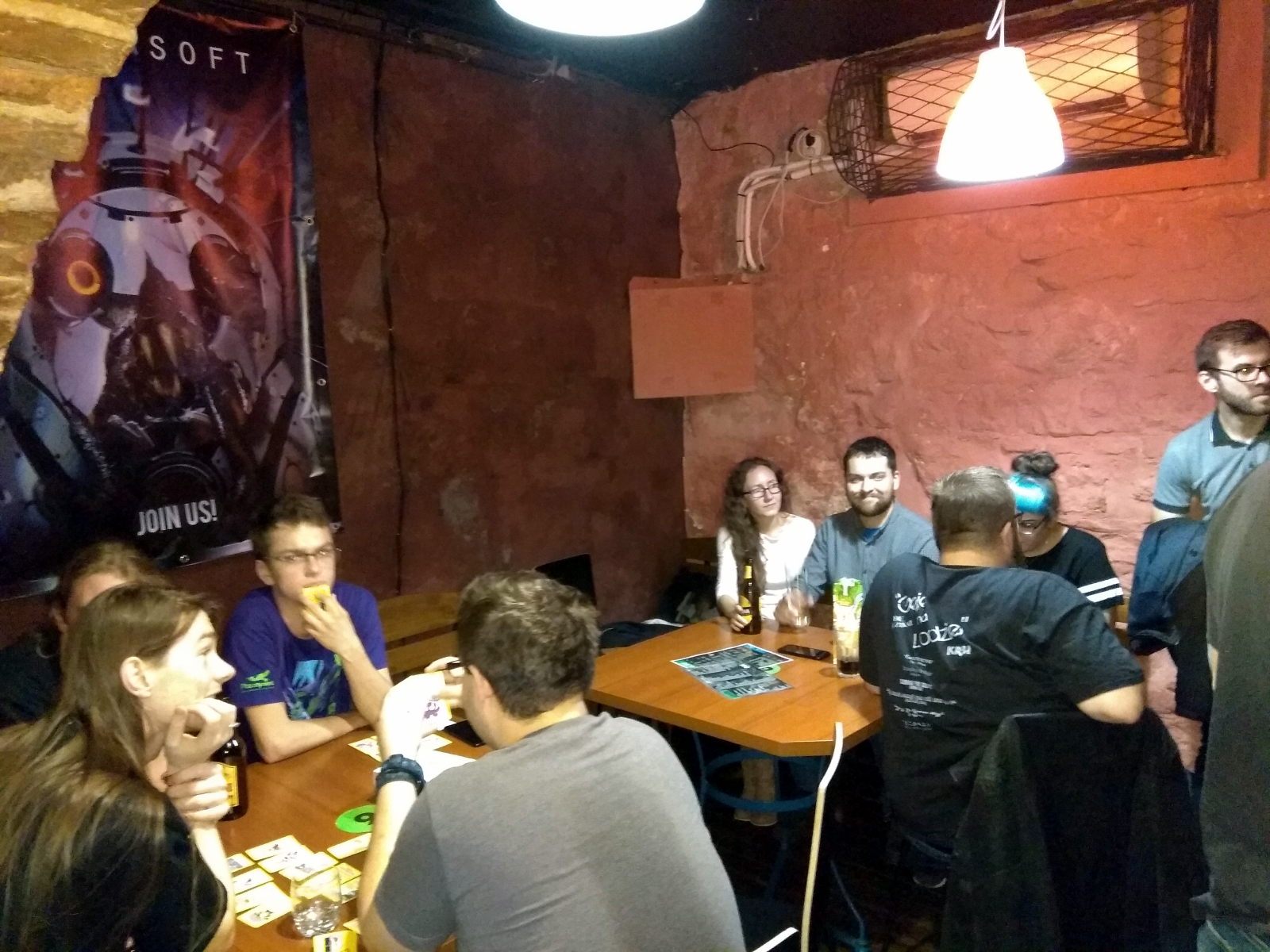 A picture showing a few of us.

In the last few years, Cafecons were organized quite rarely. I was really happy when Der (the spritius movens of the whole initiative) announced the one that took place on September 28th this year. It was the 10th anniversary of the first Cafecon. I decided I absolutely must attend it and so I did.

Was it the same old Cafecon or did it change? Well, it was as cool as I remember, but at the same time, it was quite different. Or maybe it is just me who changed over the course of the last few years? Whatever is the reason, my emotions were different than before. It was not a worse event than it used to be, it was just a little bit different. I did enjoy my time and although I did not stay long, I am quite happy that I attended it. 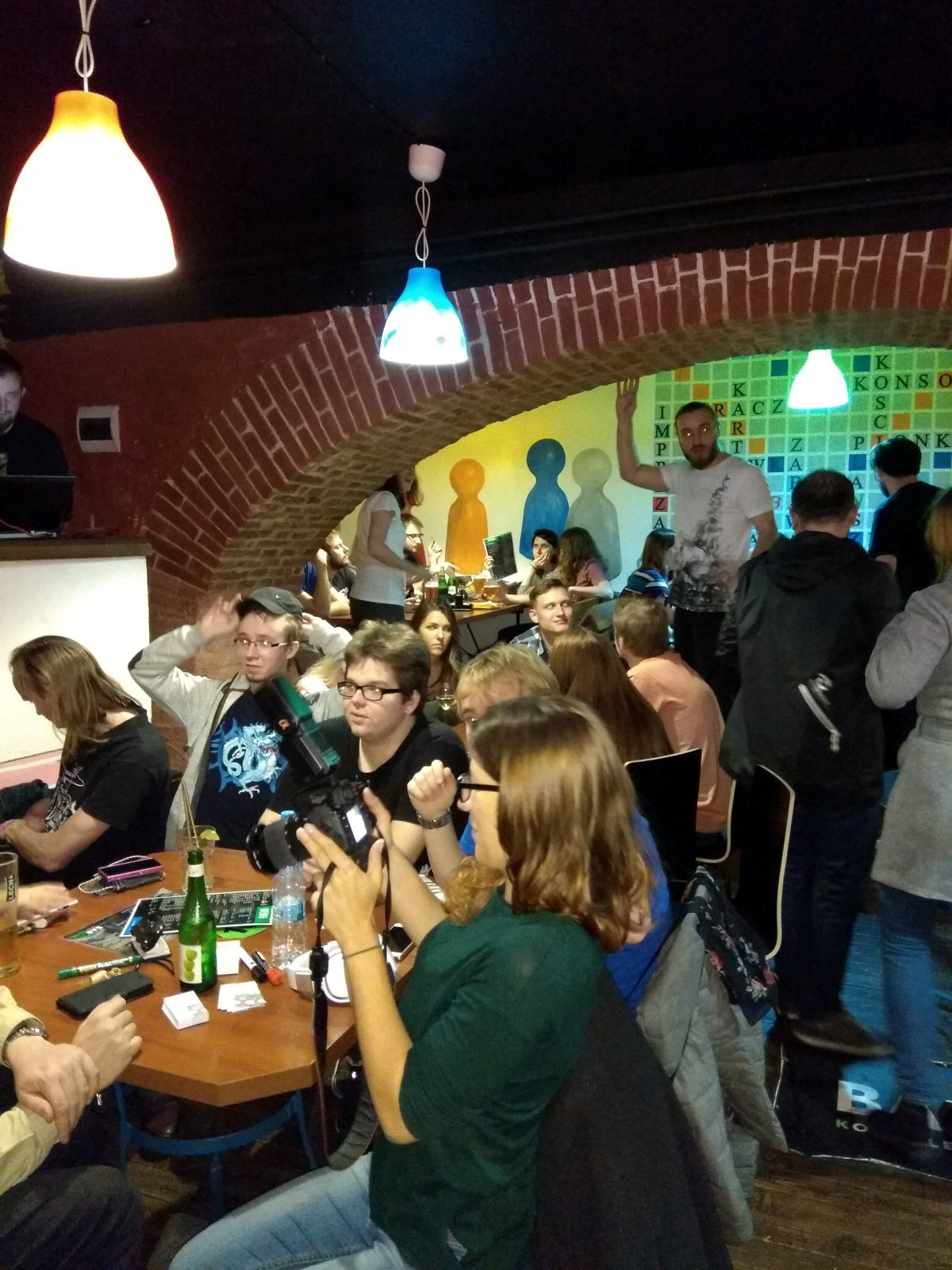 The later it was the more crowded our space was.

The big difference I spotted was the fact that there was a lot of people I didn’t know. Back in 2008, I was still deeply involved in the M&A fandom. I cannot say I knew everyone, but at least I was able to recognize most of the people. Now there were some of my old friends, there were some people I do remember from before, although we rarely spoke, but there were also people I saw for the first time. Well, the time is passing and the fandom changes. I am happy that there is a lot of new fans interested in M&A, even if I am not attending the M&A conventions any more (well, sometimes I do).

The tradition of Cafecons was its badges, at every meeting. This time it was also the case, but one thing changed. In the past we had to pay a small fee to enter. Now, the entry was free and therefore the badges were not used so widely (also, the lack of lanyards did not help people to wear them). What is cool however, is the fact that because of the 10th anniversary of Cafecons Der provided a list of 10 animes worth watching. The list is on the badge and he called it a homework. I am slightly ashamed to admit I have not seen any of those animes… 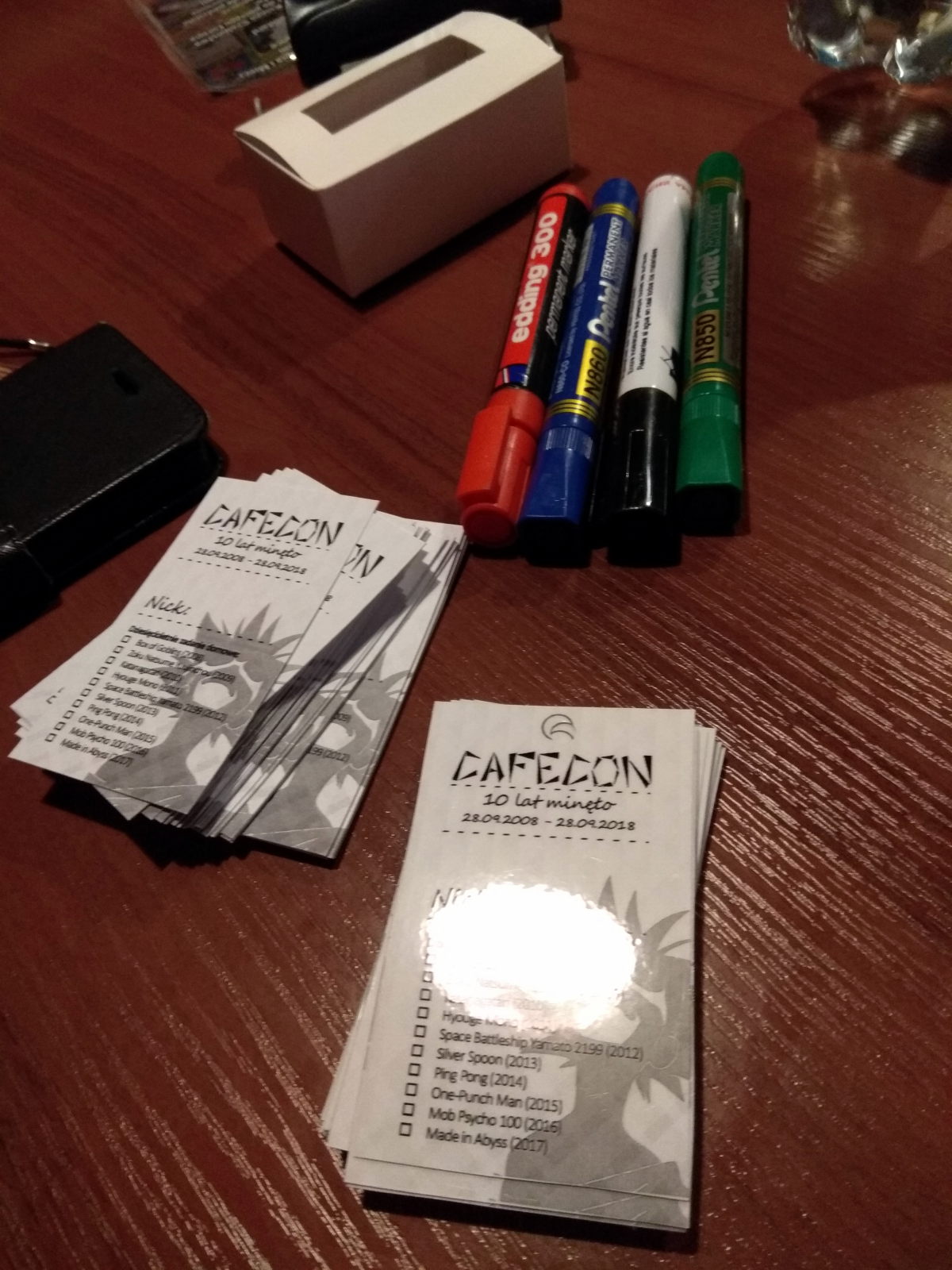 A couple of weeks have passed and now I do miss the Cafecon. I would like to repeat it and meet the old friends again. It was a great opportunity to talk as the way you can talk among old friends. It was also a great occasion to discuss some mangas and anime worth reading and watching. I am sure I will try to do at least a part of the homework Der gave to us all…

My next post will treat about Plansówki board game convention and it will be published on 30th October.