Nordcon is a relaxacon that takes place near the year’s end. I like it, and ever since my first one, a few years back, I try to visit it every year. The good thing about this con is that I have a lot of time to talk and I do not feel like missing some important programme items.

This was my second Nordcon in the year before the European Worldcon and for the second time the organizers were kind enough to include the Worldcon ad in the programme booklet. It was also the second time when I had the chance to talk about the upcoming Worldcon. Nordcon may be a small convention but it is a great audience to present Worldcon as a relatively large amount of members may be interested in the World Science Fiction Convention. 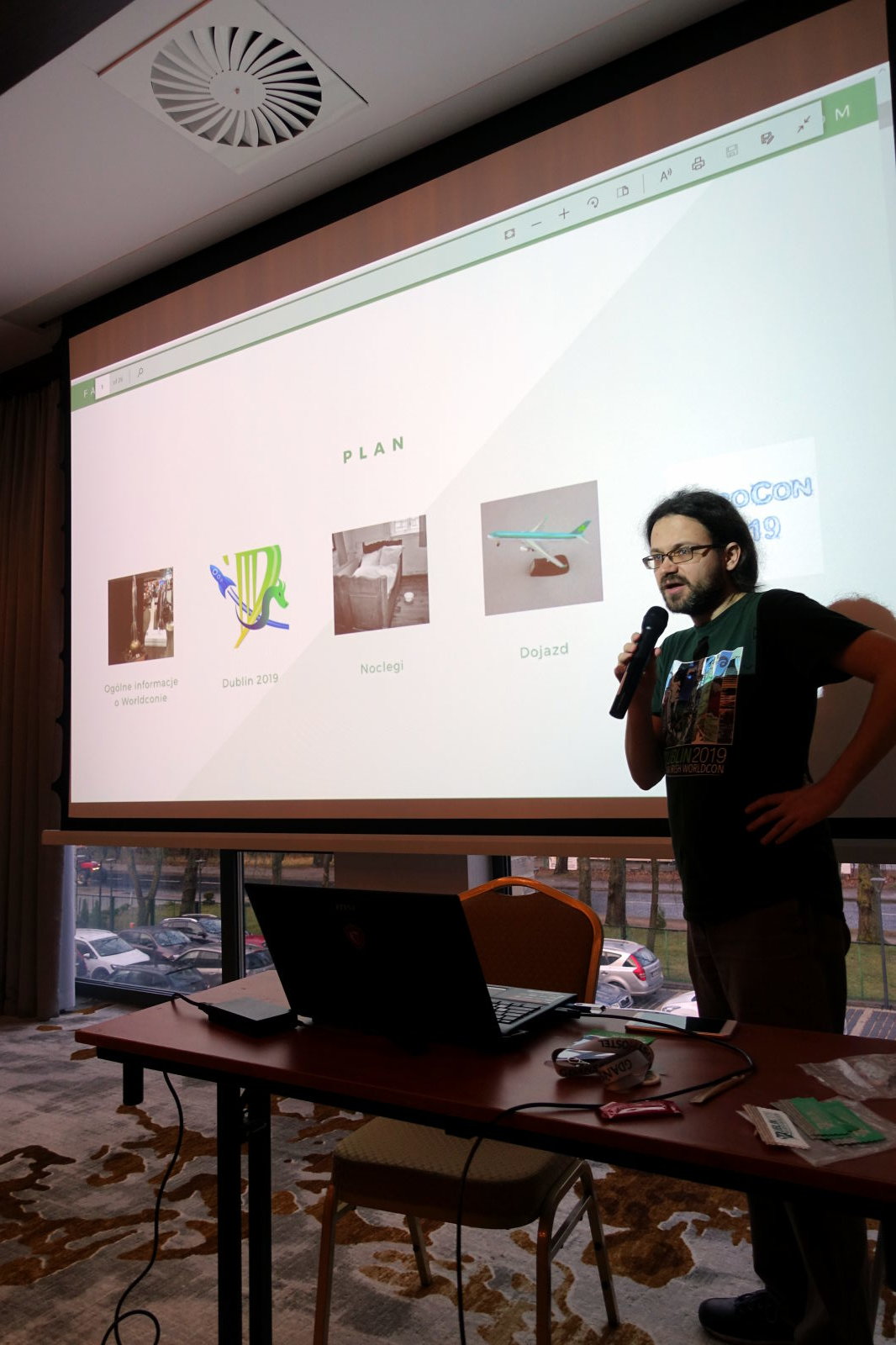 My presentation about Dublin Worldcon

This year, I talked more about both the international fandom and the fandom abroad, and at Nordcon I had my last speech on this topic this year. The audience was rather small (what is not surprising at this con at all). Yet I felt like doing the right thing. For a long time I wanted to integrate Polish fans with fans from different countries. I think that each step forward is a step in a good direction (event if it is a small step).

Programme is not the most important part of Nordcon

Although Nordcon has two programme streams and some major events, it is not the convention that one visits for its programme. Apart from the programme items I held, I participated in just a few more other events. The first one was a cabaret Pod Napięciem (the same one as last year) and the second was a closing ceremony (I will talk about it later). The cabaret was, to a certain extent, the repetition of the last year’s show. Fortunately, the second part of the spectacle was more interesting. In fact, I kept laughing so hard that I got a headache. 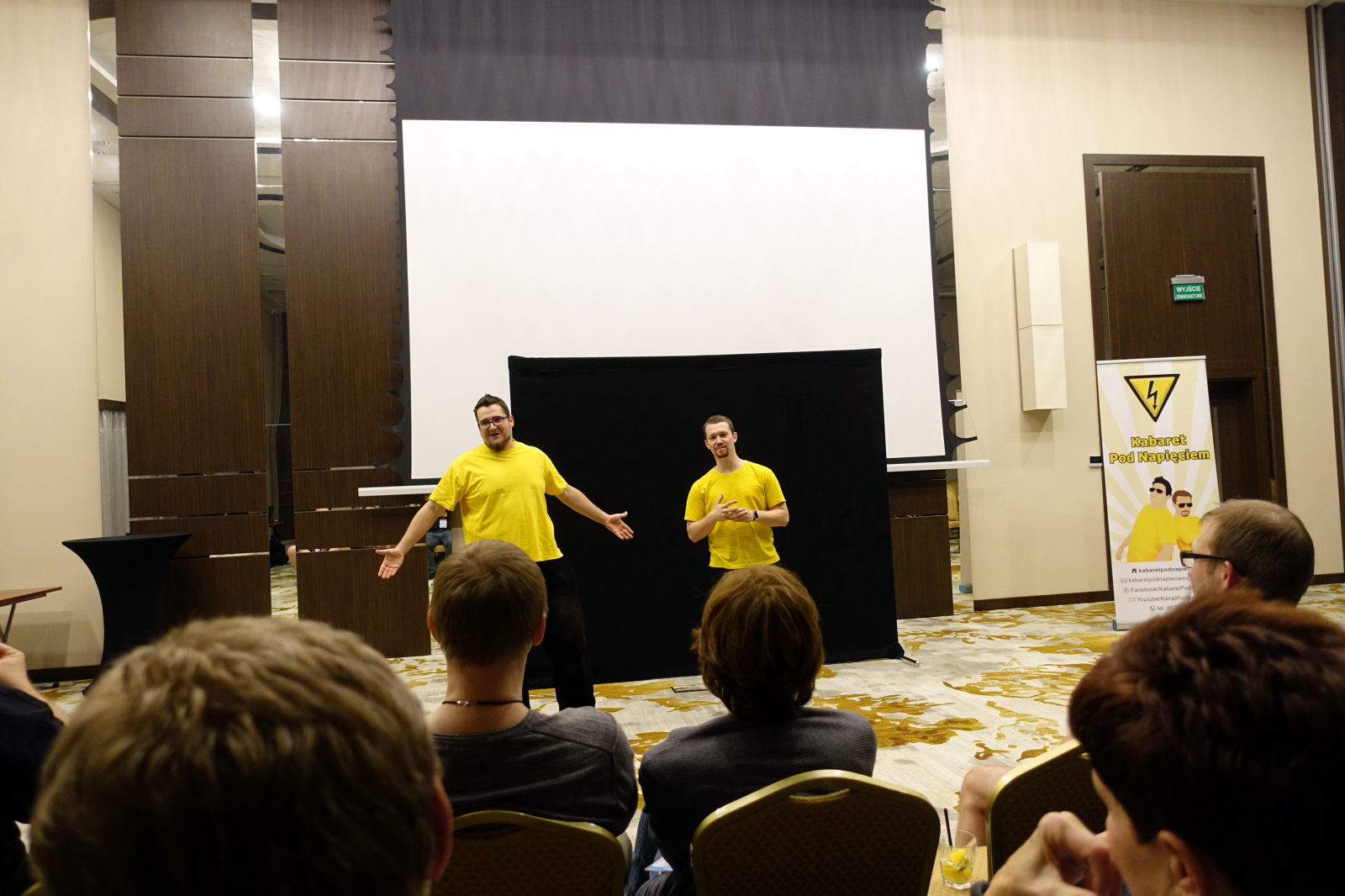 The beginning of the cabaret.

The other programme items I visited were Council of the Polish Fandom and the Polish Fandom Forum. The main topic discussed was Polcon (our natcon) 2020. It happened that no one would want to bid for 2020. There was one SFF club thinking about it, but just before the Nordcon they made decision that they are not able to host Polcon in two years’ time. They proposed to host just the Zajdel Awards but the decision was to give time to other SFF clubs to decide whether they would be willing to host the Awards only (as none of the clubs seems to be ready to host natcon). 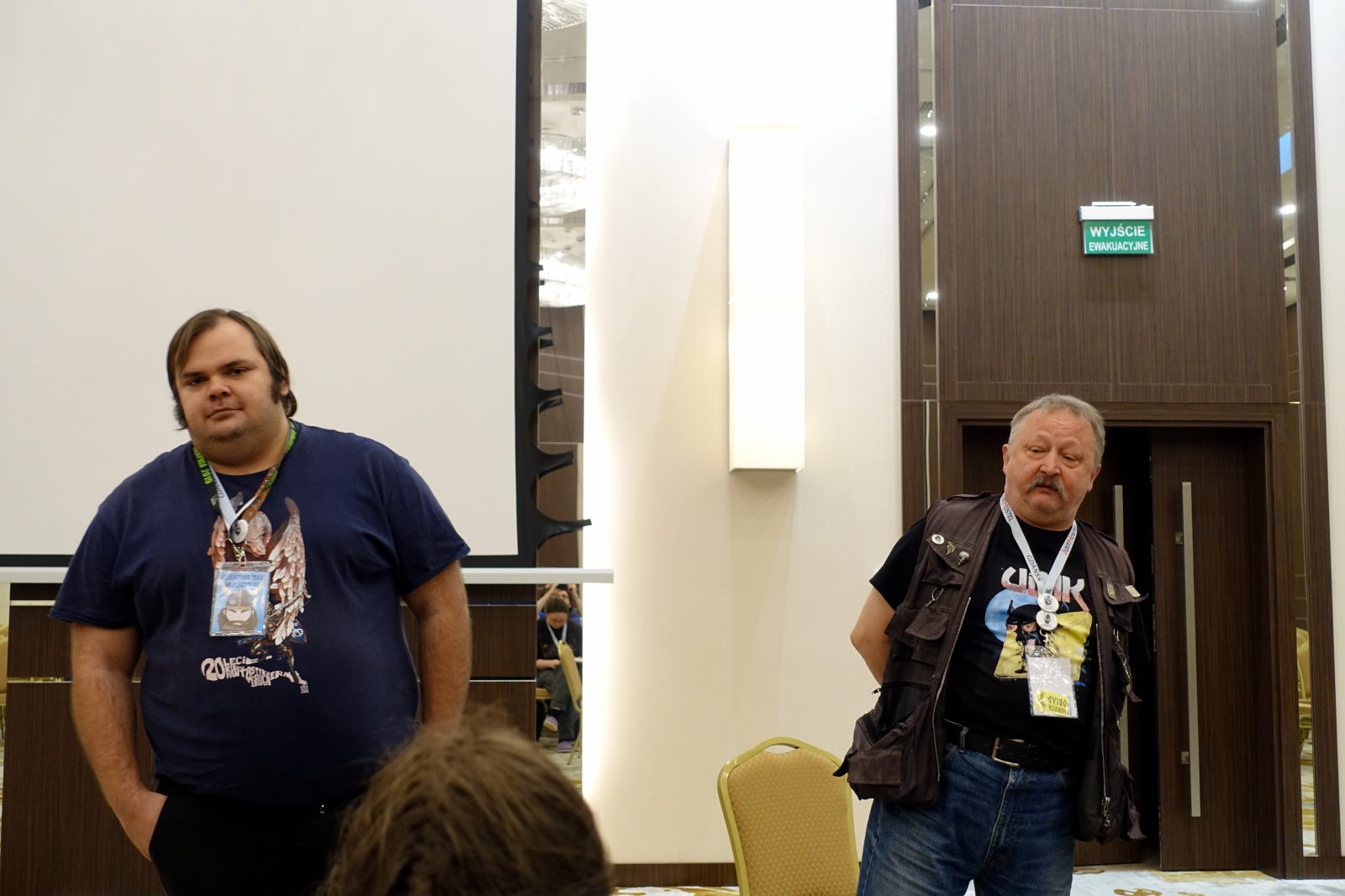 Nordcon takes place in Jastrzębia Góra at the Polish seaside. Our sea is not the warmest one and air temperature in the beginning of December varies between -10 and +5 Celsius. This year it was closer to the warmer part of the range, but whatever the temperature is, I love the beach in winter. It is almost empty and really beautiful. I believe that last weekend I visited it four times (including two evening visits, in almost total darkness). It is great to have a walk by the sea and talk with friends on convention matters (or any other topics) 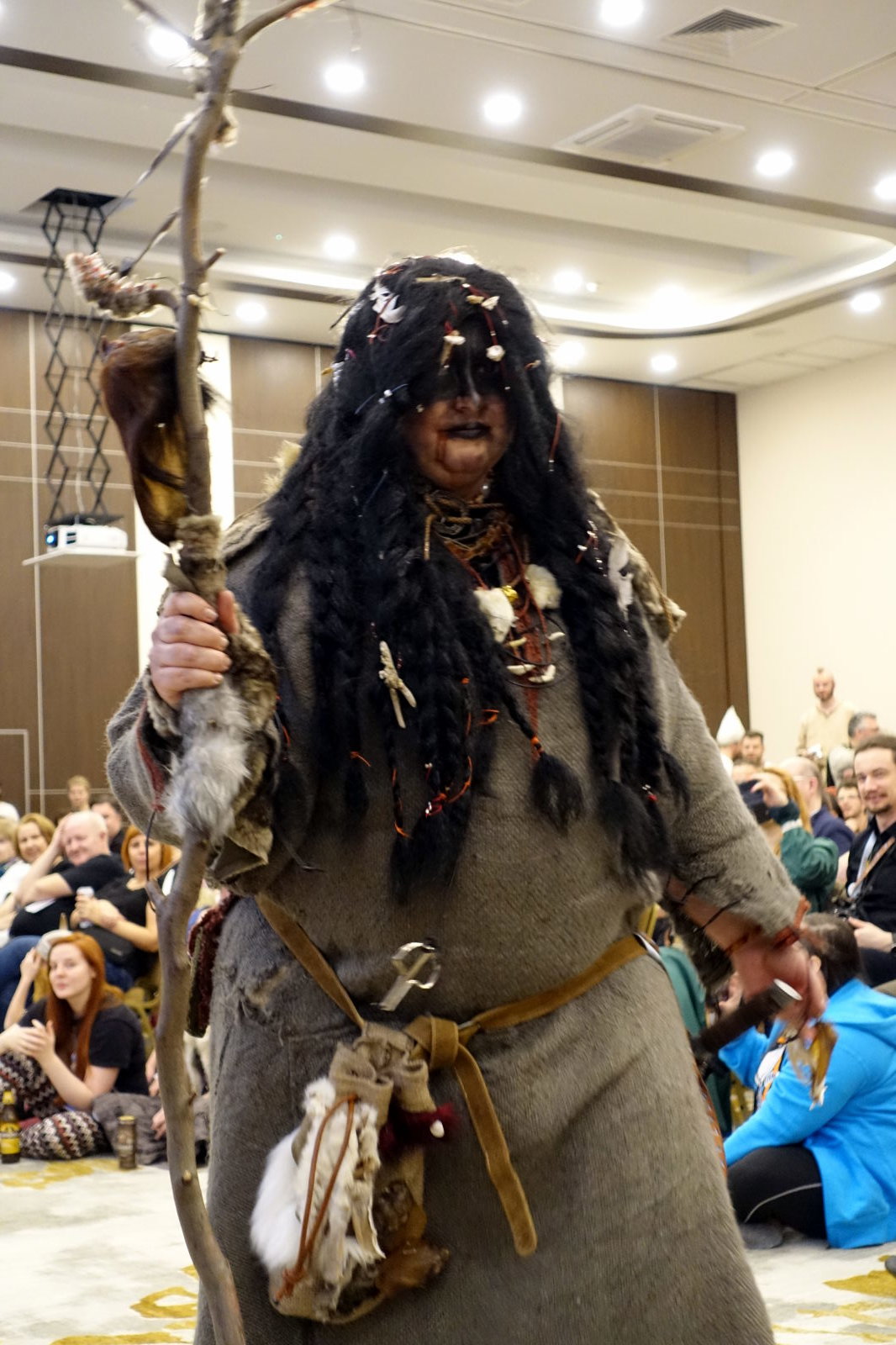 A lot of socializing takes place at the con and not by the sea, of course. I cannot measure the time spent on discussing various subjects – economy, politics, and, of course,the fandom and involvement in its matters. I really love this at any convention, and at Nordcon, it is one of the most important parts

Closing ceremony and the big surprise

There is a traditional Nordcon lottery. I was lucky enough to win the place in the jury for Masquerade Competition (which takes place at the closing ceremony) so I had a good seat to observe everything. I must admit that a few costumes were impressive and the one we awarded was really awesome. Before the official competition, there is a smaller one for children (all of the children receive a diploma). I believe that most (if not all) costumes are prepared by parents but it is cool to see how happy children are when showing off to the audience.

Tearing open the lottery bag with tickets for Friday.

One of the parts of the ceremony is the Krzysztof “Papier” Papierkowski Award for the most important, non commercial, activity in the Polish fandom in the passing year. I was really surprised when I realized that it was me who received the Award this year. It does not happen often to me but I was wordless. I was asked for a speech and the only few words I was able to muster was “thank you” and “I am speechless”. This was a complete surprise and I am still extremely happy. Here, I want to again say thank you to both the Award Jury and the person who nominated me. 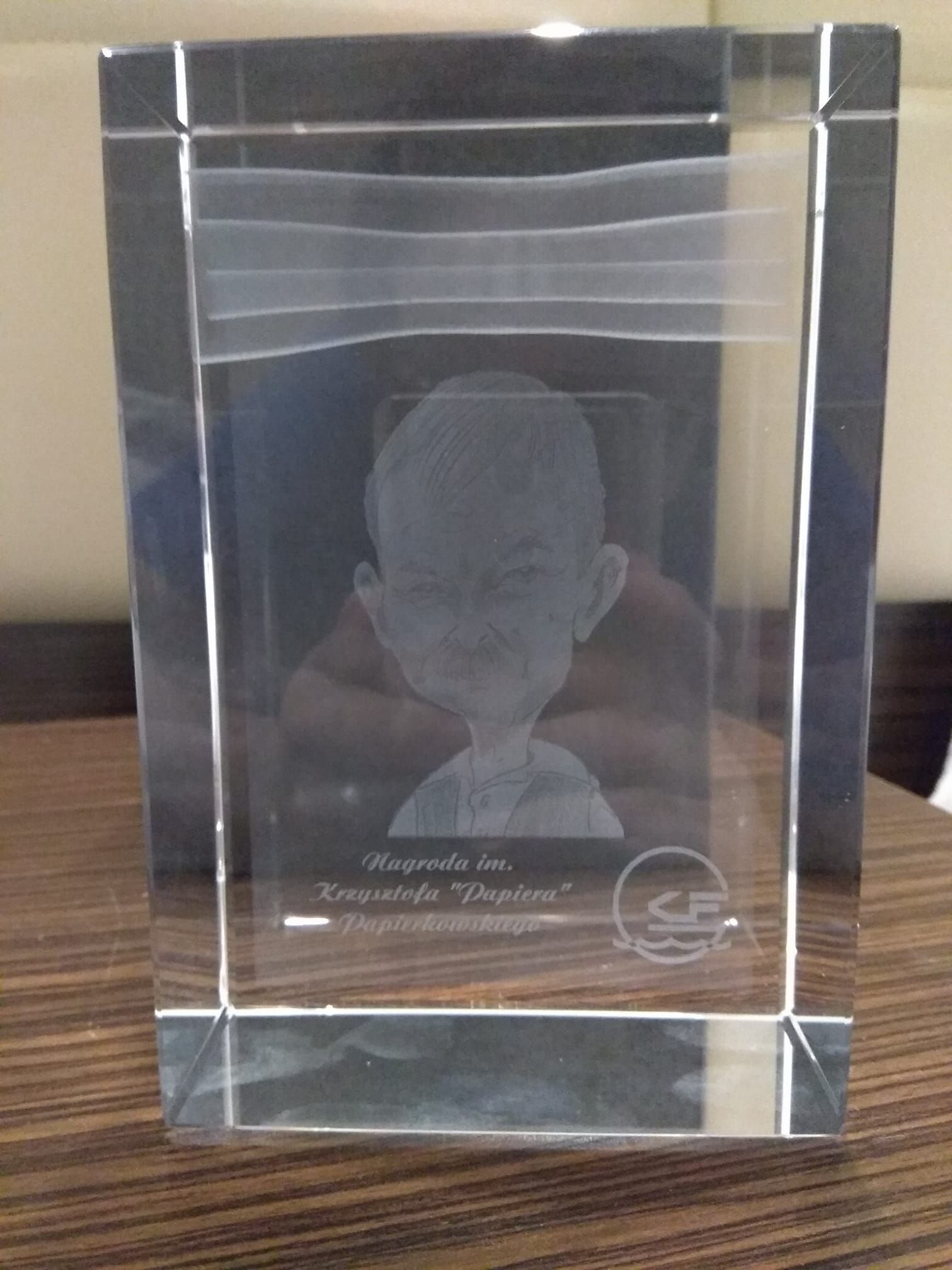 Unfortunately I don’t have a picture of myself receiving the award but here is the Award itself.

All good things must come to an end

Nordcon always ends too fast. In theory, it lasts four days, but in reality most of Thursday and Sunday I spend travelling on the train. The journey this year was very good as there were six of us travelling together. I hope that I will manage to visit Nordcon in 2019 and I am quite sad that I need to waitr a whole year for the next edition of this con.

P.S. Last year I promised that I will try to have a costume for Nordcon, but I failed 🙁 I’ll try to do better next year! 😉

My next post will be published close to the end of December.