This year marks the tenth anniversary of the ZjAva convention. I did not participate in all of the previous editions, but this one was not my first either. It is a con that concentrates on gaming (and, in my opinion, mainly on RPGs). With over 130 RPG sessions over the weekend it is currently, I believe, the biggest RPG event in Poland.

There is one good thing about RPG tournaments – you get the chance to play interesting games. This is why, despite some issues with all such competitions, I decided to participate in GRAMY! Express (LET’S PLAY! Express) during ZjAva. It is the shorter version of a bigger competition with a few years’ tradition. Its purpose is to select the best RPG player. Of course there is no such person as best player. The outcome of the competition depends on many factors and it rather rewards “the player that impressed the GM the most” but I believe you get the idea of it. 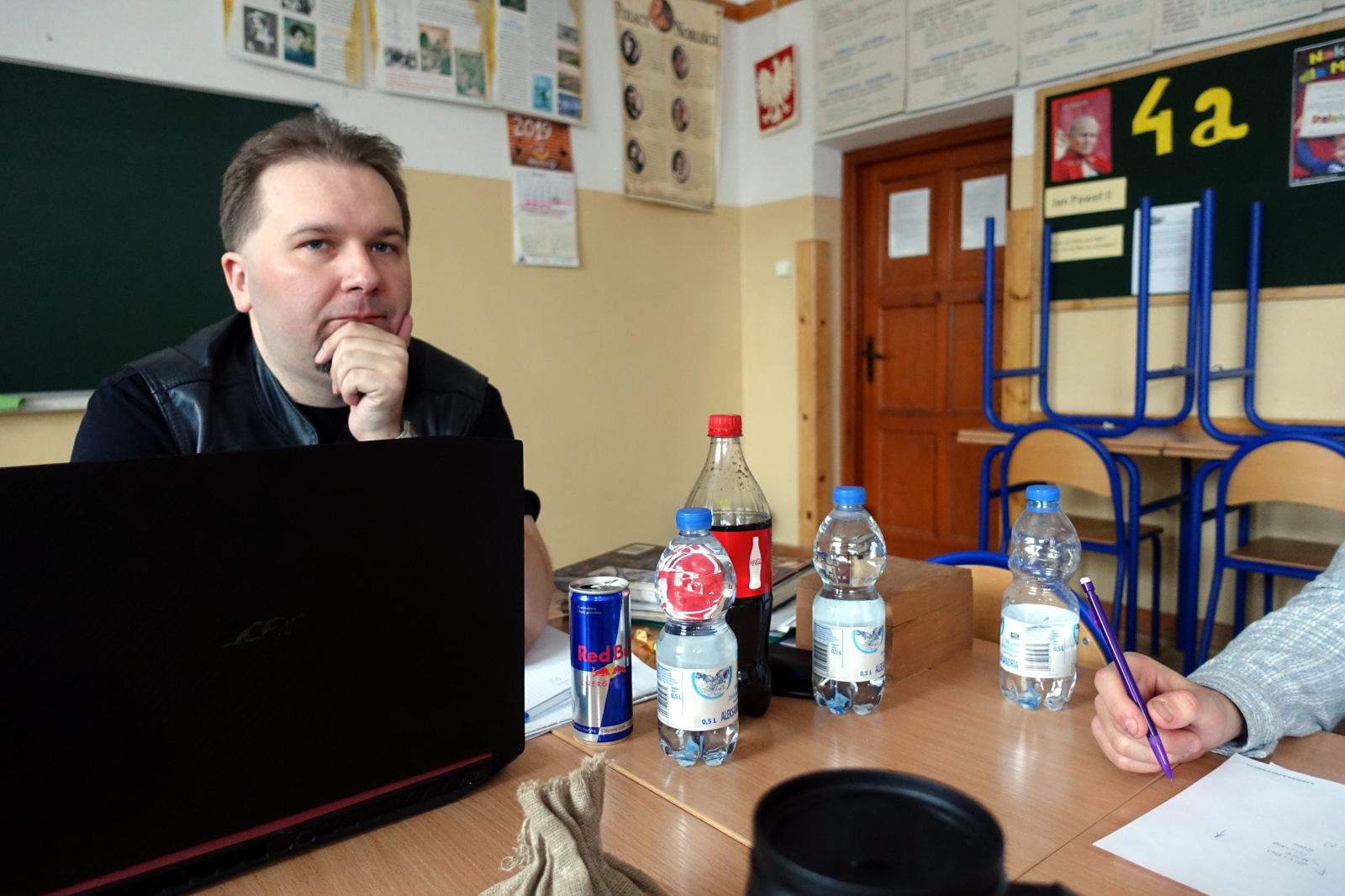 GM with whom I was playing.

I did not win GRAMY, but I am really happy that I participated in it. We had a great Earthdawn session (it was my second time playing this game) and I am really impressed by it. When one participates in such competition, all players are trying to give their best and GMs are also putting a lot of heart into making the game interesting. Because of this, it is really a pleasure to participate in it, and winning or losing is just an addition.

Three days and only two sessions

I had the chance to play only two sessions (and I spent three days on ZjAva 10). The first one was the Mouse Guard session on Friday evening. The game is really cool and I must play it again someday. The second one was the Earthdawn session mentioned above. The latter started around 10 AM and we finished around 4 PM. Within those six hours we were introduced to the tournament and so on, so we played around 5 hours in fact, but I was a little bit tired afterwards still, and I decided not to play another session on Saturday. On Sunday, I had to catch the train back home at such an early hour that I didn’t manage to play any sessions on that day. 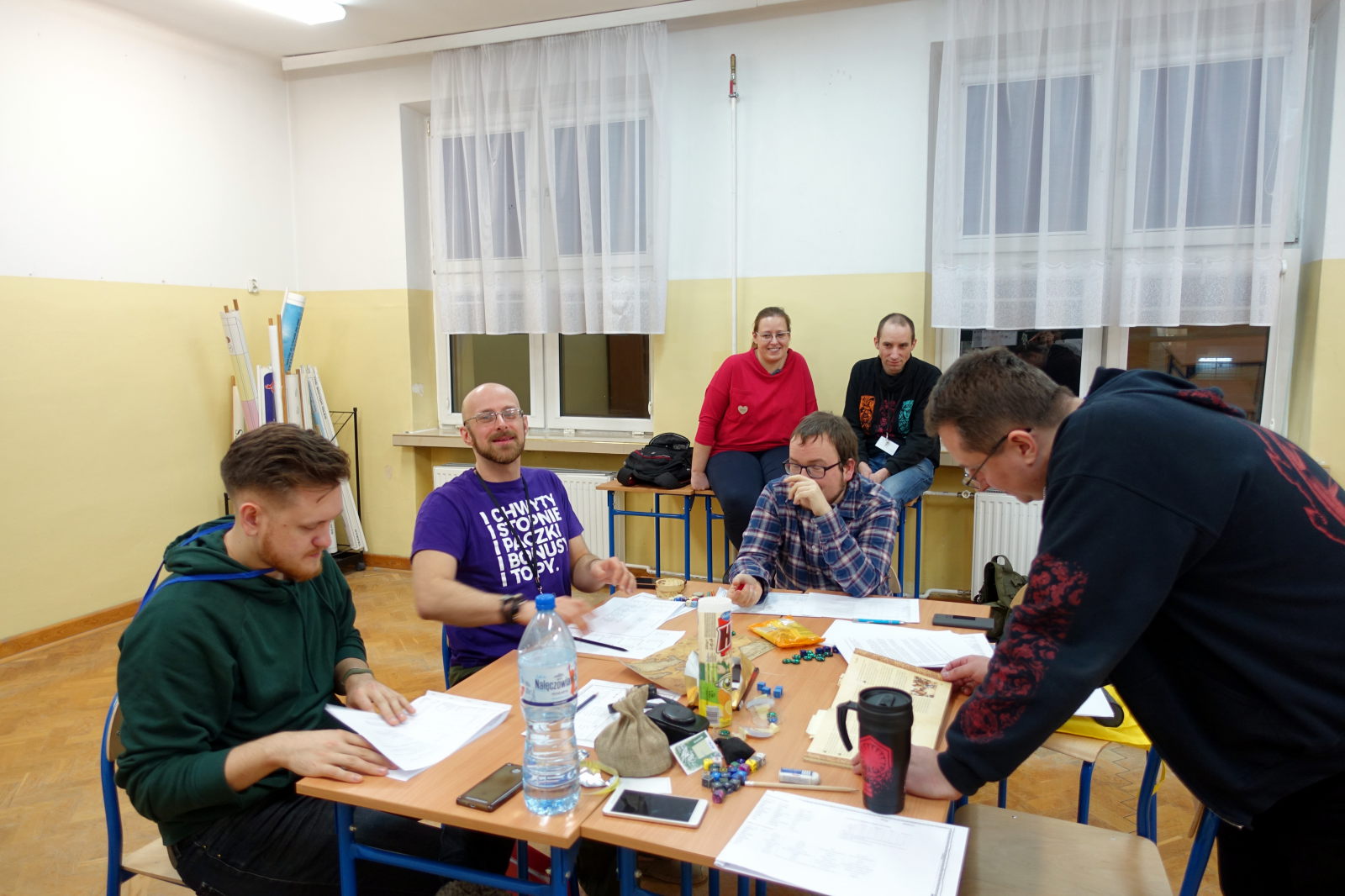 GM with whom I was playing.

I did not get bored during the rest of my time at ZjAva – I had the chance to play a board game and I spent a lot of time talking to my friends. There were a few occasions to talk, and I managed to cover quite a few different topics with different people. Some of them were related to fandom or gaming and some were really weird. I enjoyed this time and I would love to repeat late night conversations on another con.

One of the less typical events that took place during ZjAva 10 was the classic silent film show. The movies were accompanied by a music played live by Błarz from Gorektyw group. He used a guitar and a theremin. The effect was spectacular, but also quite a bit creepy. I watched only around half of the show as amount of strangeness was too high for me. The films were quite surrealistic themselves and, coupled with similarly surreal music, they were stunning. We watched The Astronomer’s Dream (1898), Bluebeard (1901) and the first film adaptation of Alice in Wonderland from 1903. 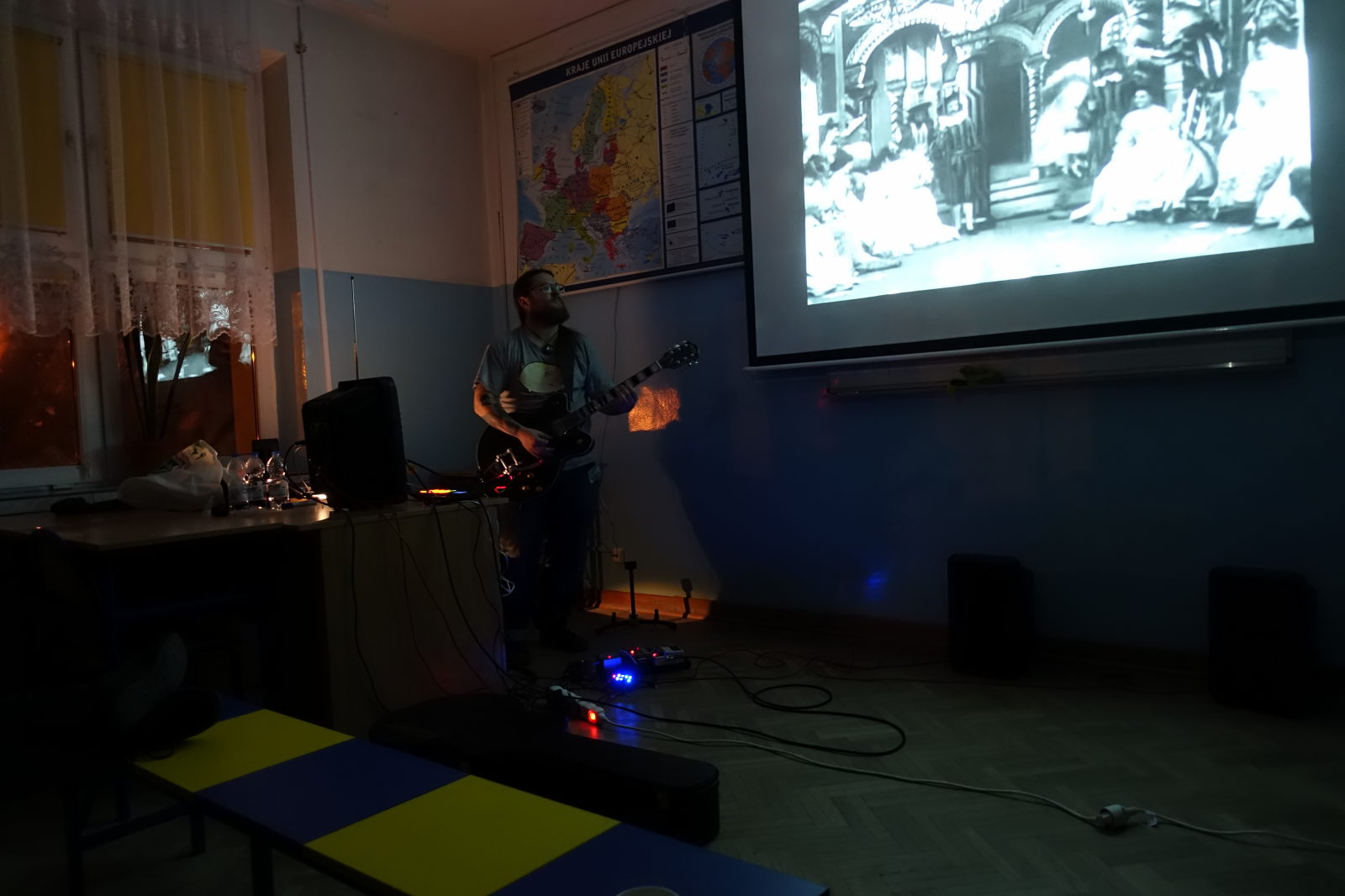 ZjAva is one of the very few cons in Poland that follows “everyone pays” system. There are a few people who receive the money back afterwards but tradition is that we all pay for it. Thanks to that the price is quite low. I really like it as it proves one can still have a good con following the old tradition. 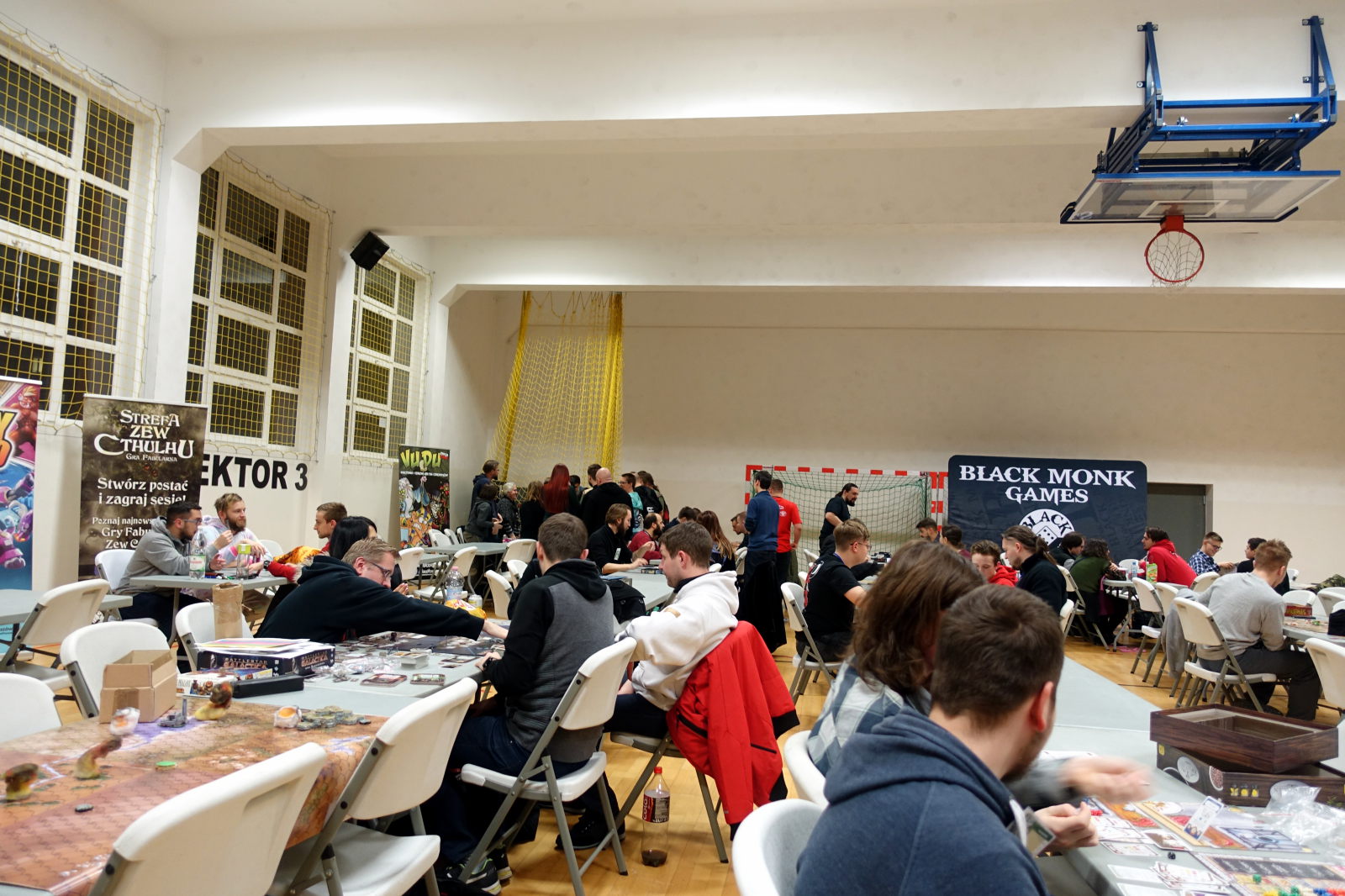 The interesting thing is that you need to change your shoes when entering the venue. It is one of the rules of the school where ZjAva is held and we all needed to change our shoes into slippers, sneakers or something similar. In order to sweeten this “burden” a little, there is a competition called Złoty Laczek (Golden Slipper), with a reward for the best/most interesting slippers…

What I really liked was the free tea that was available at the con. I am not sure whether it was prepared by the concom or whether this was all doing of one of the gophers but there was a possibility to receive free tea at the info desk. And the person running it made sure that there were different kind of teas available at different times. Yummy! 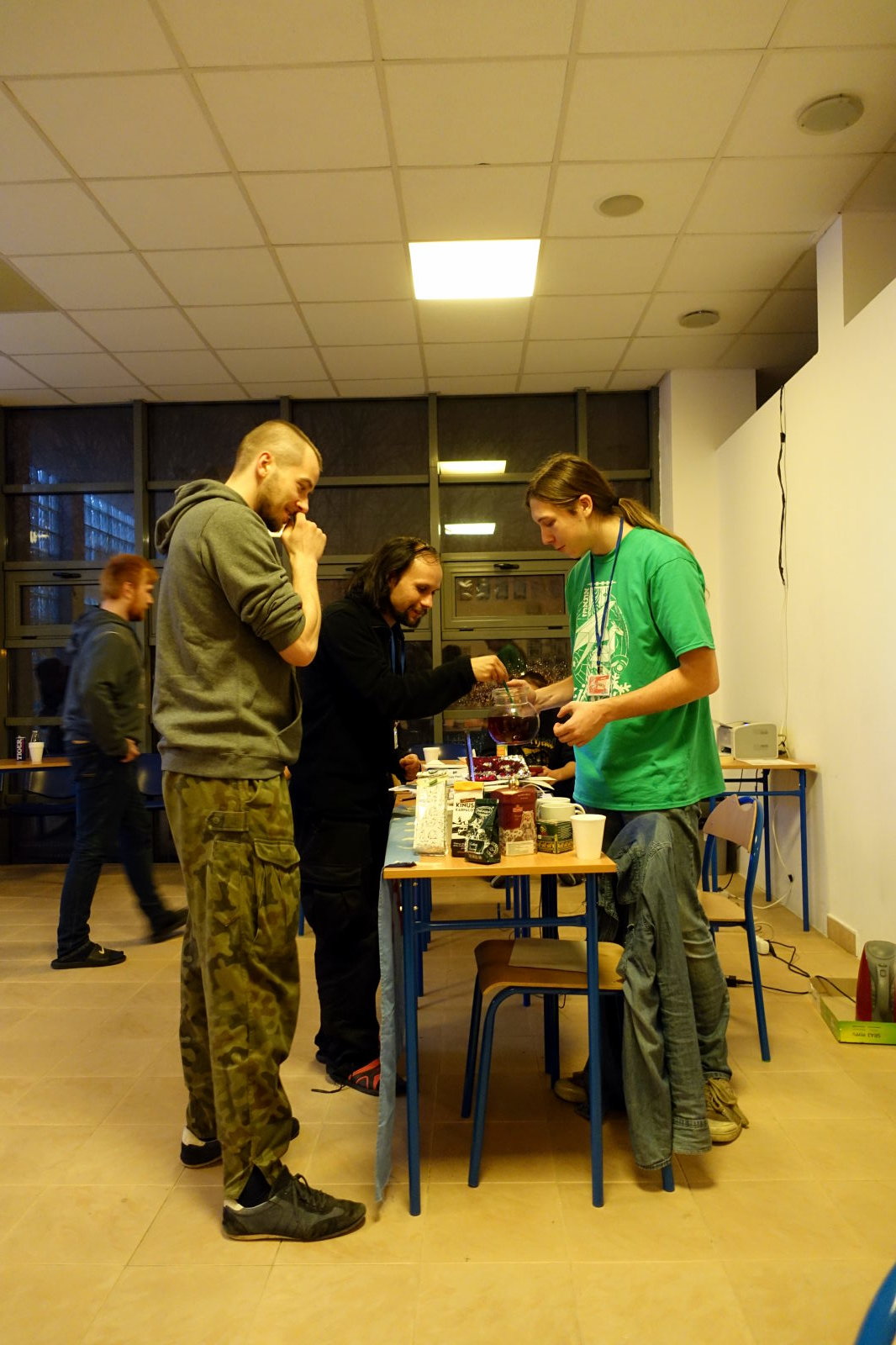 Gopher behind his “tea station”.

There were some minor issues at the con and not everything was perfect, but I really enjoyed my time at ZjAva. I hope I’ll manage to visit it next year and maybe play a little bit more (or spend more time chatting with friends).

My next post will be published in the beginning of March.