Last year, Śląski Klub Fantastyki (Silesian SFF club) launched a new convention – Śląskie Dni Fantastyki (The Silesian SFF days, ŚDF). This year ŚDF took place for the second time. I had the pleasure to visit the convention and see all the dragons that were there.

There was a theme to this year’s ŚDF, and it was related to dragons. The theme was implemented quite well, however I would probably add a little bit more of dragon-related programming. Still, in general, it was well done. First of all, both programme book and the badge had the convention’s dragon on it. The latter was quite simple but still the dragon was there. The programme book cover is magnificent – I am not sure who created it, but the art is really great. 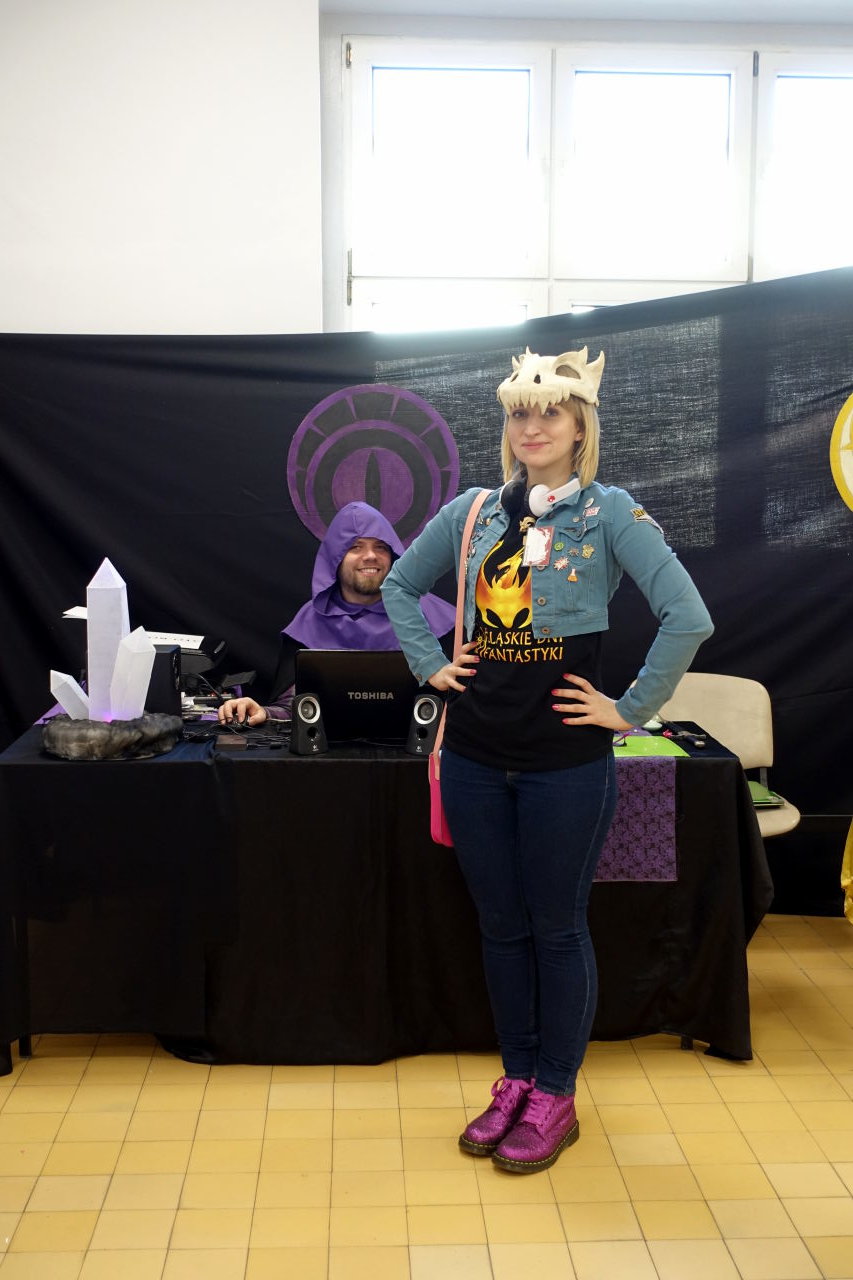 There was a small exhibition of works by Małgorzata “Smoczyca” Pudlik – most of the pictures presented there depicted the dragons. You can see a part of it on the picture below. I was there when the exhibition was being prepared and I had the chance to talk to Małgorzata and ask her about her creative techniques. 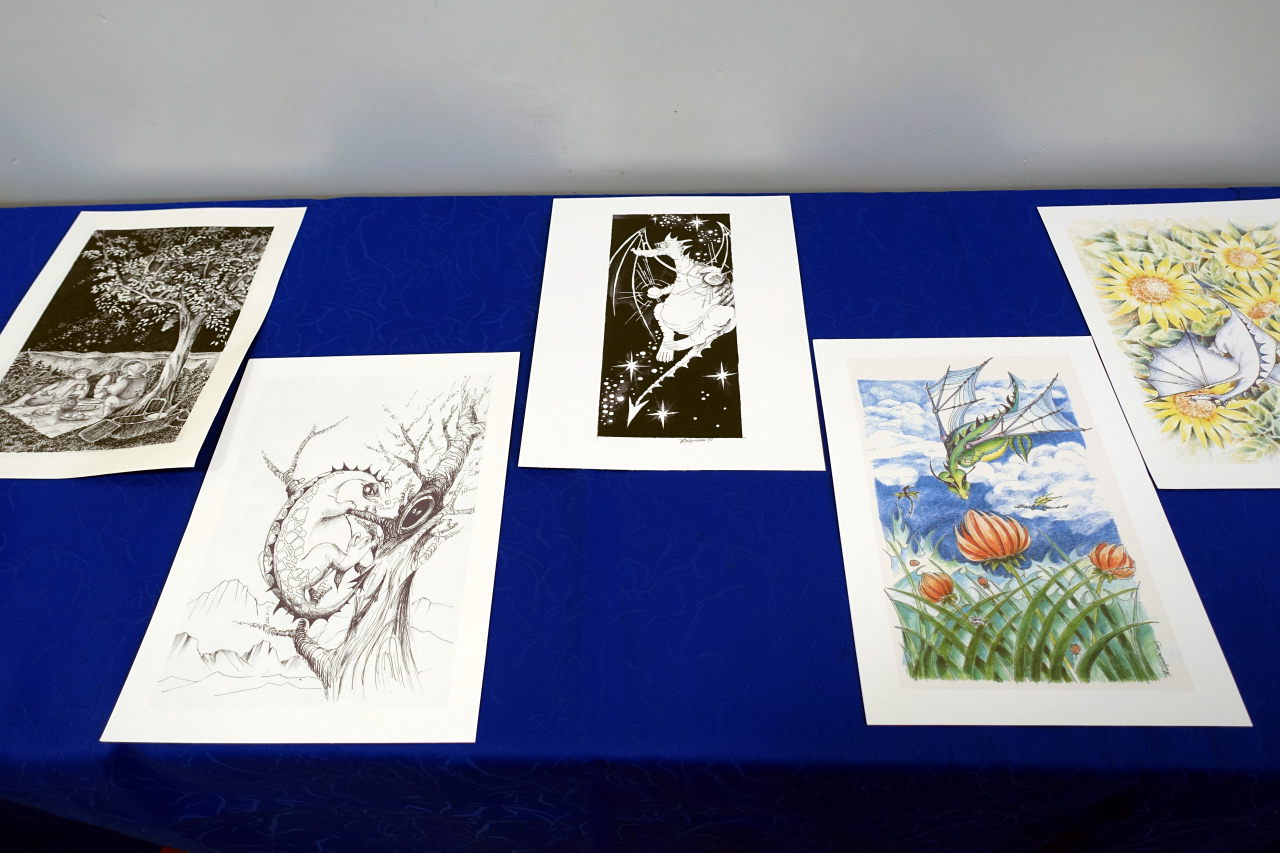 A special theme game was prepared in order to allow people to feel the theme. The purpose of the game was to identify one’s own inner dragon. The game was quite easy and possible to complete within 30 minutes, yet it was quite fun. There were four dragon temples that contained two opposing “elements” (nature and metal, water and fire, air and earth) each. Once you found the temple, you had to choose the element and perform the task for the temple’s guardian. When you managed to complete three quests, you had to go the fourth shrine where the representatives of the dawn and dusk dragons were waiting. Here, depending on your choices, you would discover your inner dragon and receive a pin as well as a dragon head plushie. 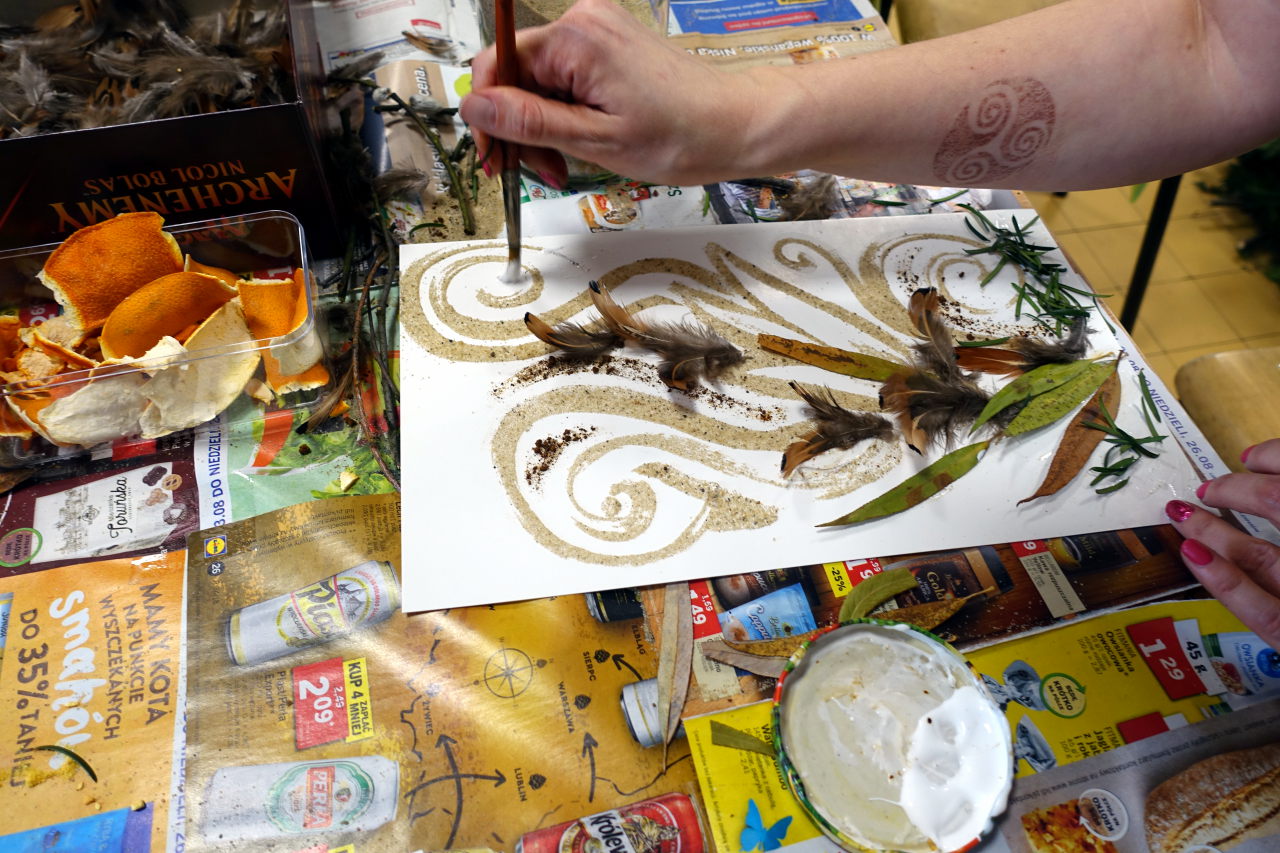 My friend made a beautiful collage.

The game was really cool and the tasks were quite diverse. I chose nature first, and had to prepare a collage using some natural elements (sand, orange peels, leaves, feathers etc.). When I had to choose between water and fire, it was easy – I went for water. I received three blue balls and had to throw them at a target. Lastly, when I saw some nice crystals, I decided that earth was closer to my heart than air. The task was to sing one Polish song in a heavy metal style. Unfortunately, when my inner dragon was revealed, it was a swamp dragon and I completely don’t feel like a swamp creature :(. I think I made a mistake with the earth vs air choice.

I missed the programme

Somehow I was not in a proper mood for attending programme items and I chose to talk with my friends instead. I saw only three items (and in case of two of them I was their participant so I had to be there). I really regret that I missed the harp concert of Barbara “Harfiarka” Karlik. I really like her music and it is a pity that this year I did not go to see her play. There were also a few other items that I found worth visiting, including a meeting with one of the authors – Robert M. Wegner (I wanted to go there but my panel was scheduled against it) and a confab about magical creatures and monsters hidden in the city. 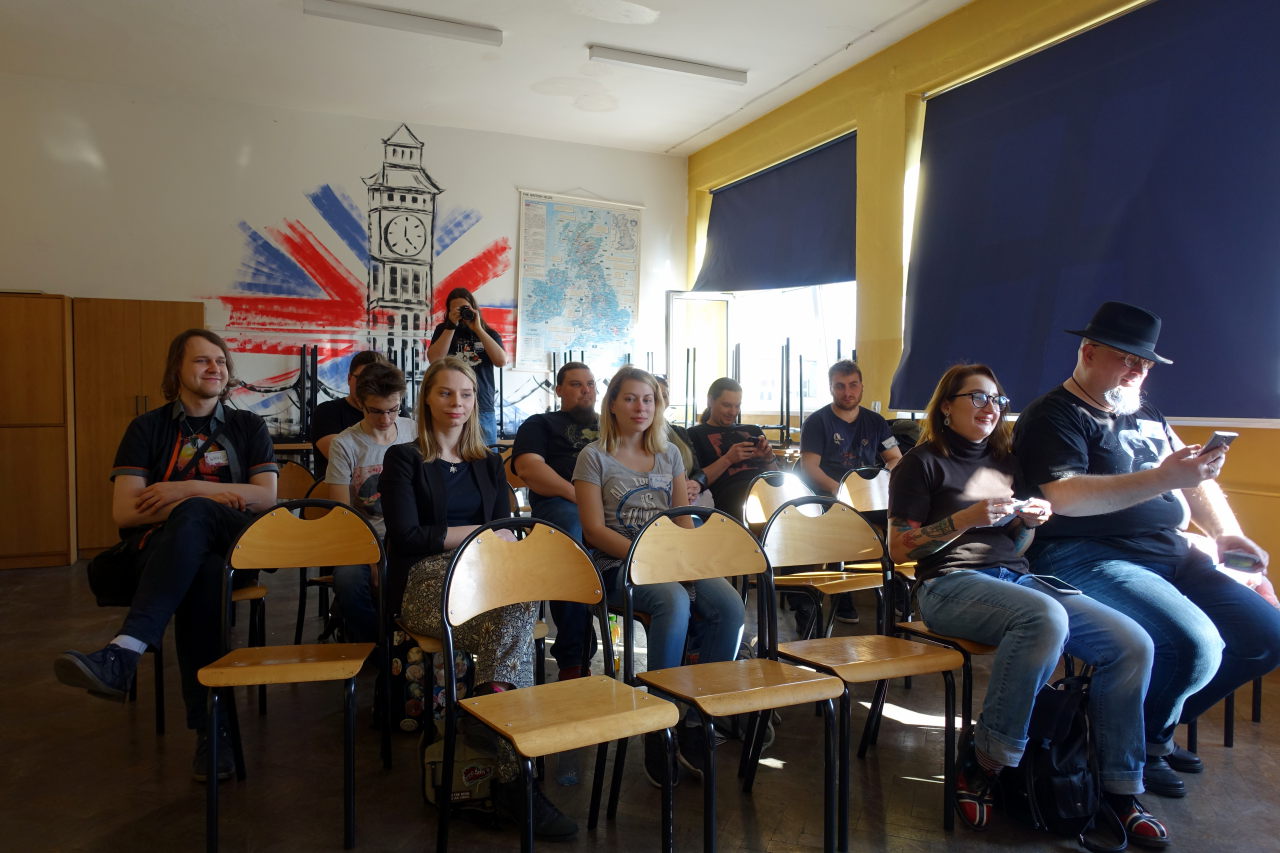 Audience ay one of the panels.

Apart from the standard programme, there was also an escape room prepared especially for the convention. I had to enter the dark cave that happened to be a mad scientist’s hideout and I had to recover a dragon egg from the inside. The time for completion of this quest was short (30 minutes), as the scientist could come back any minute. Together with two other fans we completed the quest within around 18 minutes, so I guess we did relatively well. 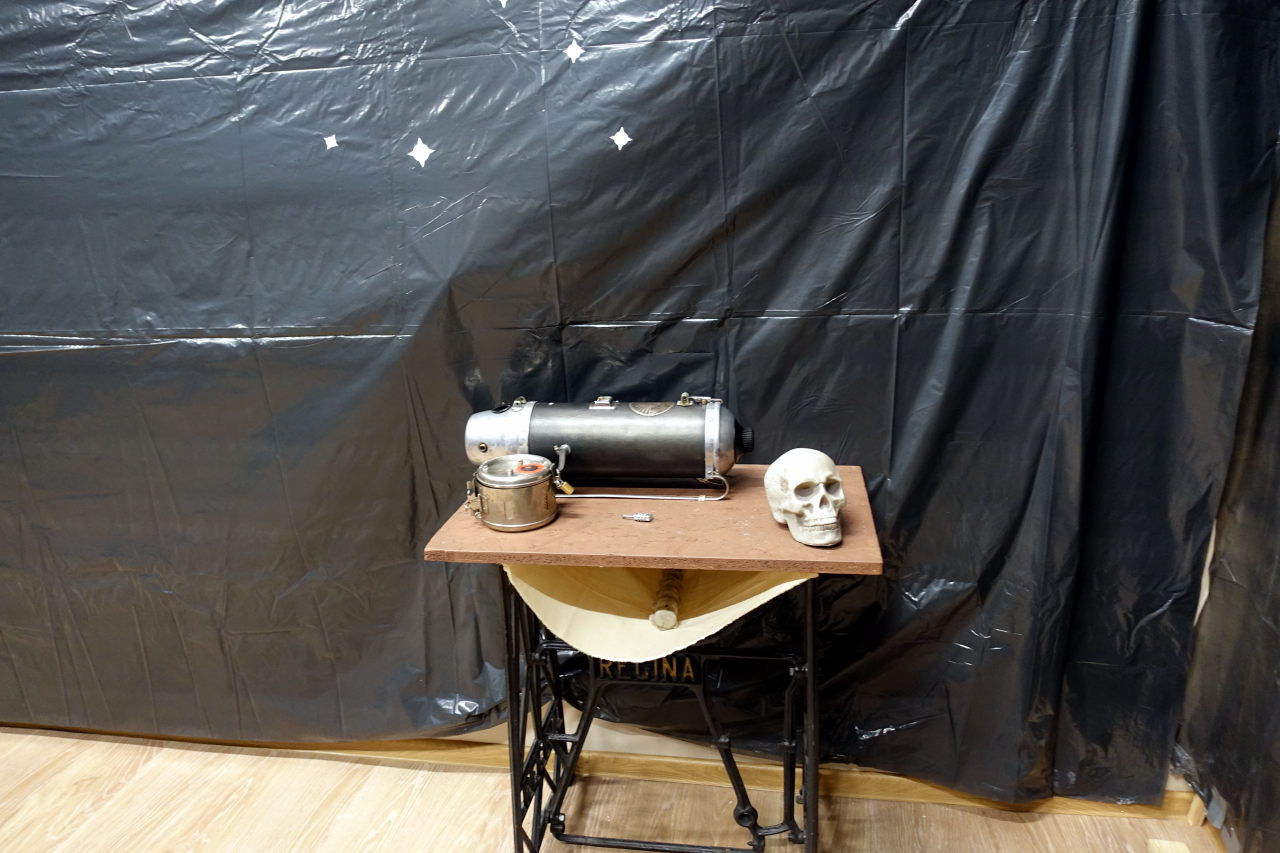 Escape room looked way bettwer when the only source of light were our torchlights.

Just like last year, the local bakery – Magorówka was present at ŚDF. And that means that I ate too much sweets again… They not only have nice cakes but their prices are unbelievably low. And since the choice of their baked goods was large enough, I had to try a few cakes (I think I tried four different things in two days…). 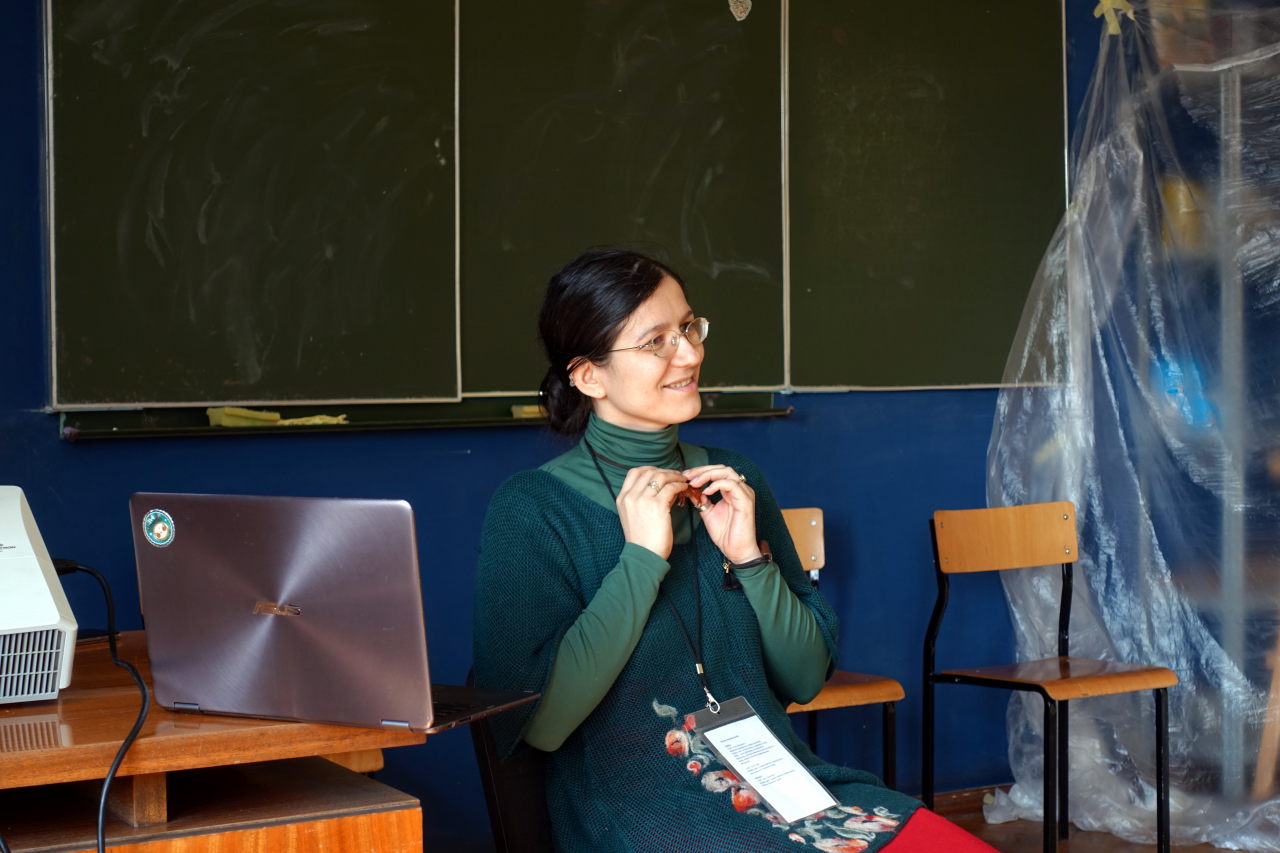 A talk about music in LARPs and RPGs.

The convention finished too early (as usual). I am really happy that I visited ŚDF this year. When I compare it to the one in 2018, I think that the convention developed and I am quite happy about that. Although I have not participated in the programme, I found quite a few interesting items. The atmosphere was as good as before, but it was also possible to see that the club got a better grasp on how everything should be done. I am already looking forward for the next ŚDF in 2020.