I love Worldcons. I have only been to three of them, but I have fallen in love with the very first one. With each Worldcon I attended I was more and more involved in them. In Dublin, I have not only been a gopher and not only helped in promotions, but I also had a chance to work in the Programme team. I cannot be fully objective when writing about this convention, but I will do my best to describe Dublin 2019 An Irish Worldcon as good as I can.

Part of the team worked on Dublin 2019 for many years. I had been helping before the convention (but not for such a long time) but it did not occupy my whole free time. The convention however started on Tuesday for me (two days before the con). I joined the MIMO team and spent my first two days on moving and sometimes assembling stuff. It was a great pleasure but also a very tiring experience. Yet on Thursday, when the convention had started, I felt like being already at the third day of the con and that is why the whole Worldcon felt like a week-long convention to me (instead of “just” five days). 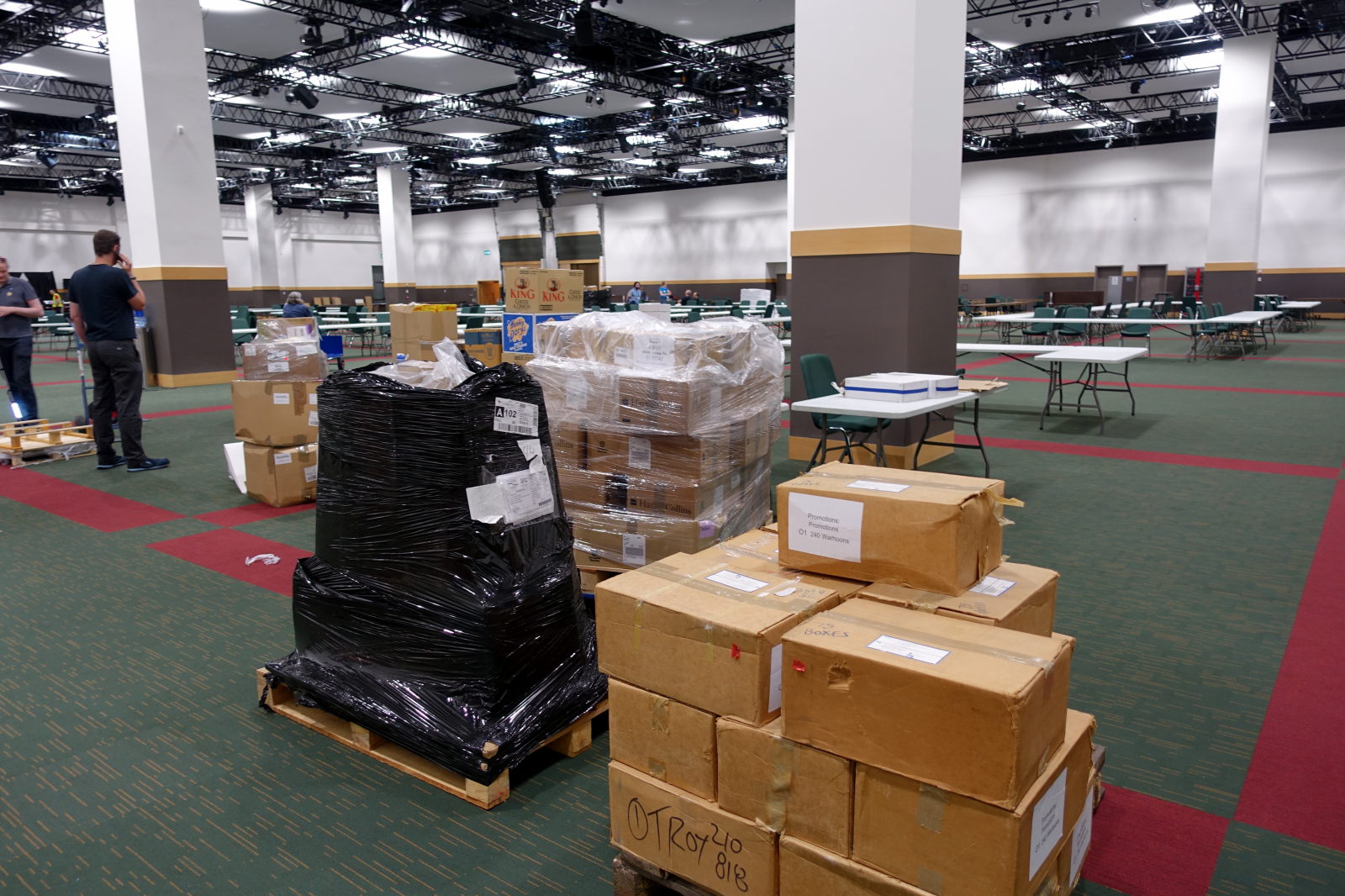 Move-In and tons of books.

This came with a price – I felt quite tired and because of that I was no able to fully enjoy the con, but even though it was a great event to me.

The music is all around me

As some of you probably know, I really like music at conventions. Dublin 2019 An Irish Worldcon had a lot of music and it made me happy. What made my unhappy, however, was the fact that I did not have a chance to participate in any filk circles. During the whole convention I had just one occasion to go to the filk circle and I barely spent half an hour there (but it was great!). This of course is not the fault of the convention – I had simply stayed in a place around an hour away from the con and because of that fact I had to finish relatively early. 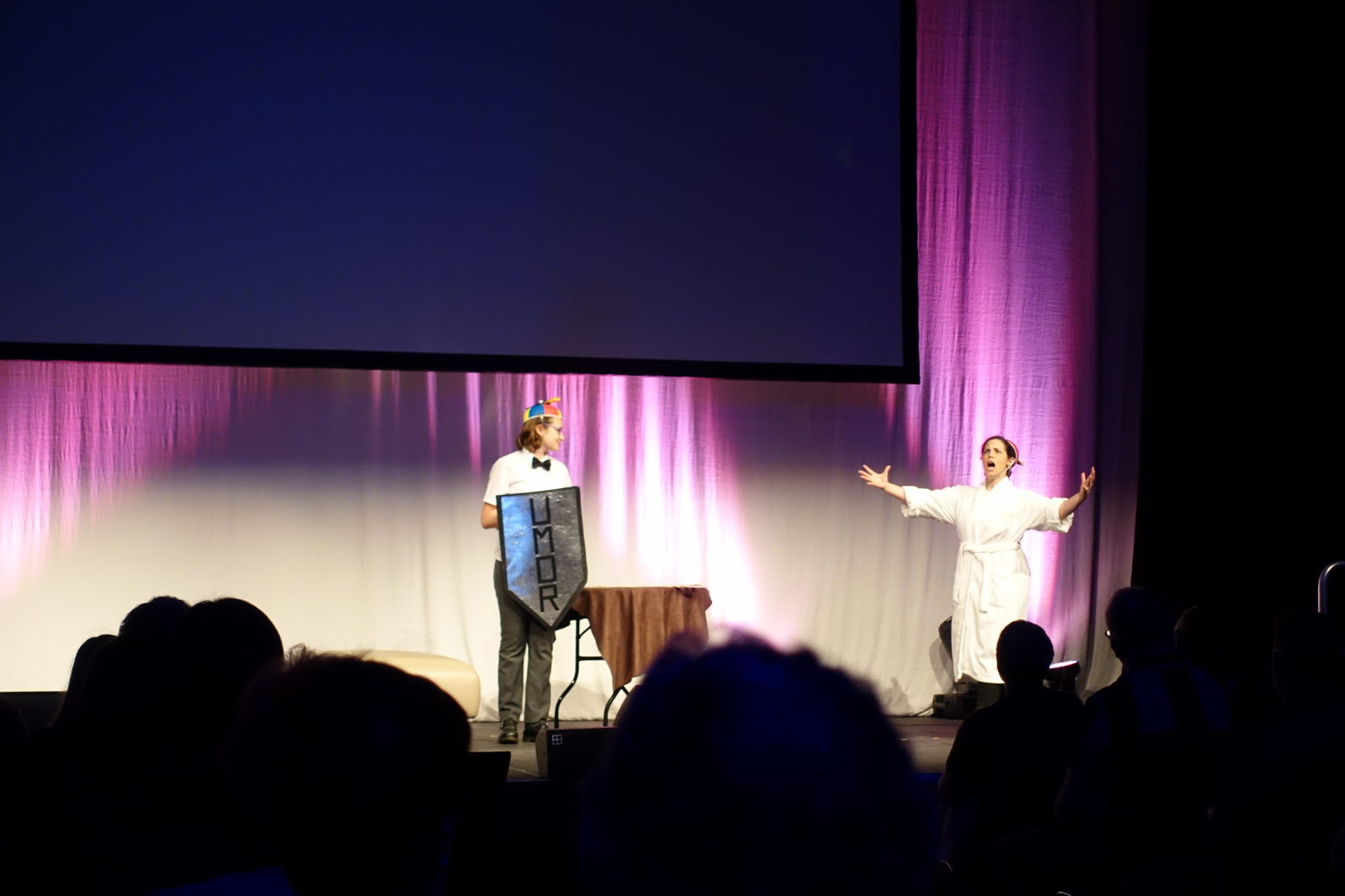 Spirit of Fandom talks to Jophan – Musical from The Enchanted Duplicator.

Fortunately, I was lucky enough to listen to the music on a few other occasions. I was really excited about The Enchanted Duplicator musical. This is a story I really treasure and watching it played and singed was absolutely awesome. I cannot forget about the chance to listen to a great artist for the first time – Alexander James Adams. I have been adoring his works for many years and although during the Canticle Productions concerts he didn’t play any of my favourite songs, I was enchanted. One concert of other artists was not such a great experience for me, but I have seen people enjoying it, so it may be just my taste and not the quality of the music itself. 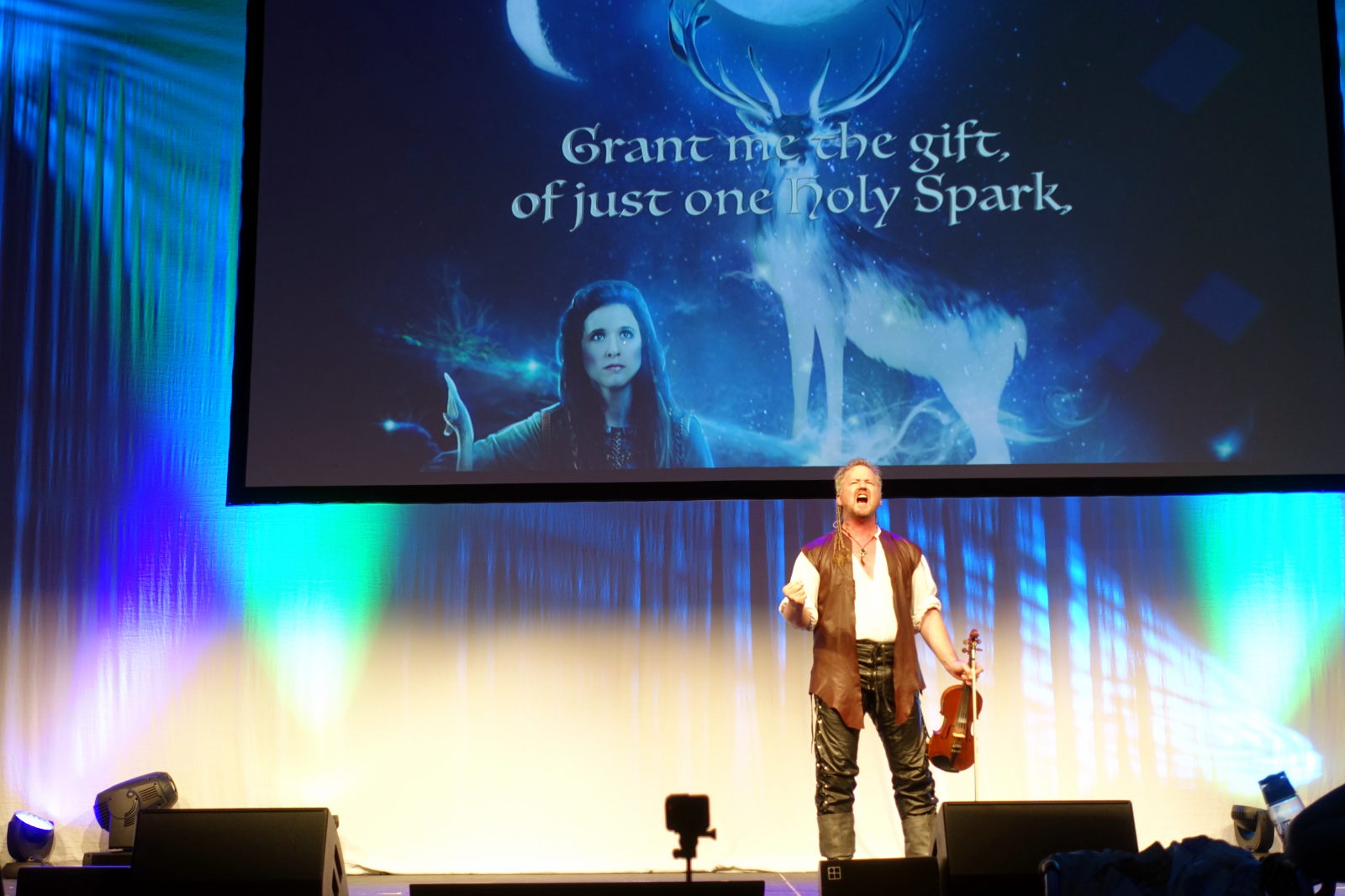 The Worldcon Philharmonic Concert – Dublin was an interesting experience of a different kind. All in all, I believe that I prefer filk, but listening to a well-known (or not so well known) SFF-related musical pieces performed by an orchestra is mesmerizing. I had a similar opportunity during Loncon 3 and I gladly attended the concert in Dublin as well – definitely worth the time.

Lastly, I have to mention the musical parts during the Opening Ceremony and Hugo Ceremony – they were a great addition to the events.

I am totally not objective here, but I liked the programme of Dublin 2019 An Irish Worldcon. Some of the items caught my attention during the early phases of programme creation (and I don’t mean the ones I was working on). Some I have spotted while being at the convention. I made it to a few panels and some of them were extremely enjoyable while others not as good as I had hoped. 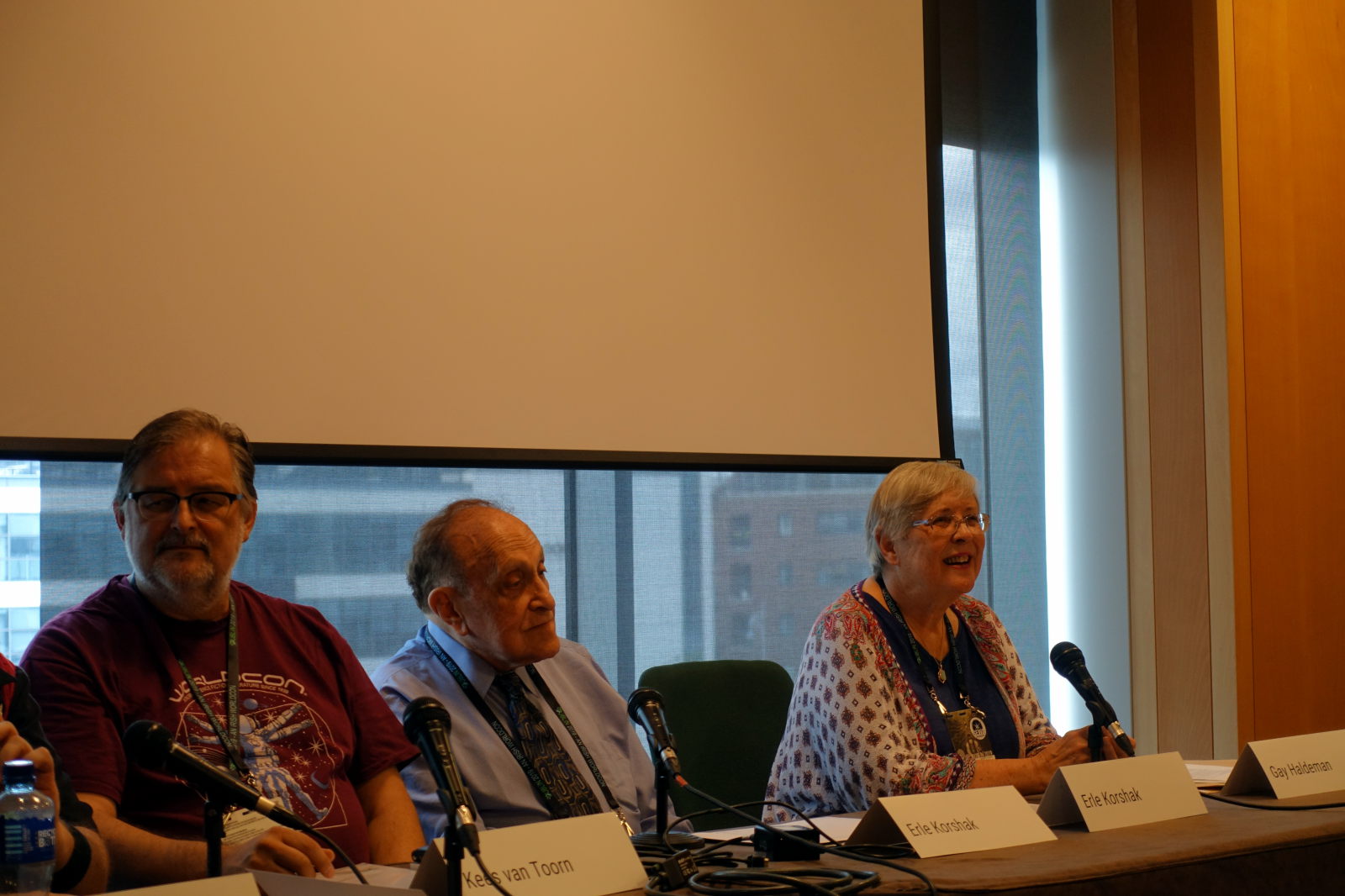 One of the panels I attended.

The big problem was the space availability. The items I was interested in took place both in CCD and in Odeon Cinema (a relatively short walk from the CCD). Unfortunately, queues were sometimes too long to make it possible to attend the item. At one occasion I simply resigned from participation when I saw the queue. On a few other occasions, I was able to enter the room without any issues (and sometimes empty seats were available until the end of some items). In Odeon, after the item I attended had finished, I had to go out to the end of the queue. I was angry at first, but after giving it a thought I decided it was a good idea – this way more people can enjoy the programme instead of one person occupying the room for a whole day. 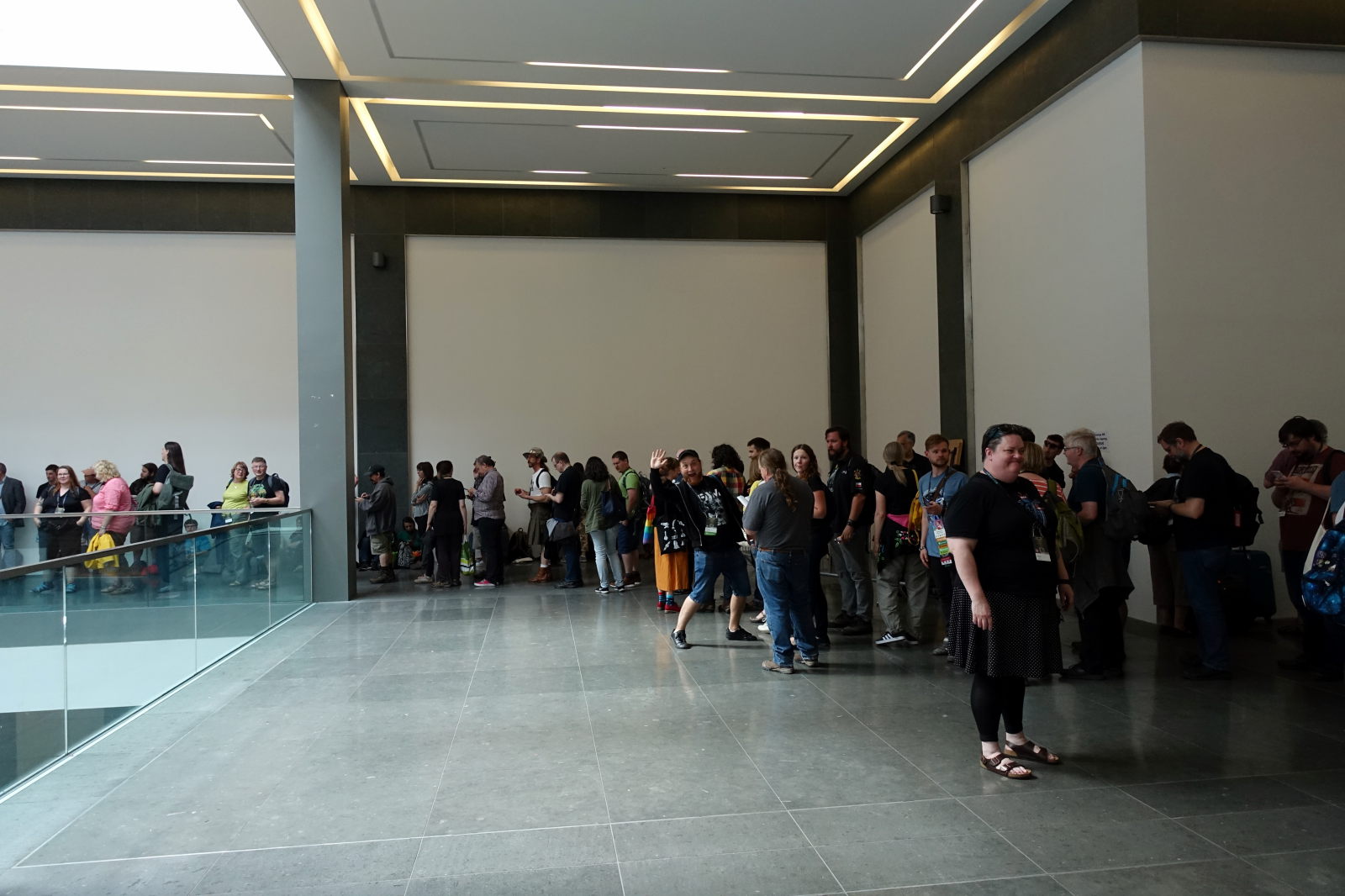 After seeing this queue in odeon I decided I will skip my next planned panel.

Starting on a second day of Worldcon, I have seen improved system of queueing. Of course it did not increase the number of space in programme rooms, but at least provided more comfort for people moving around the building.

I participate in kaffeeklatsches way to rarely

Somehow I don’t have too many occasions to participate in kaffeeklatsches. Probably it is related to the fact that most cons I attend don’t do them and during the the others I usually don’t feel confident enough to participate. I know it doesn’t make sense but well – here I am. The meeting with Paolo Bacigalupi was however something I didn’t want to miss. He is a great author I really enjoy reading and who is able to touch me with his works. 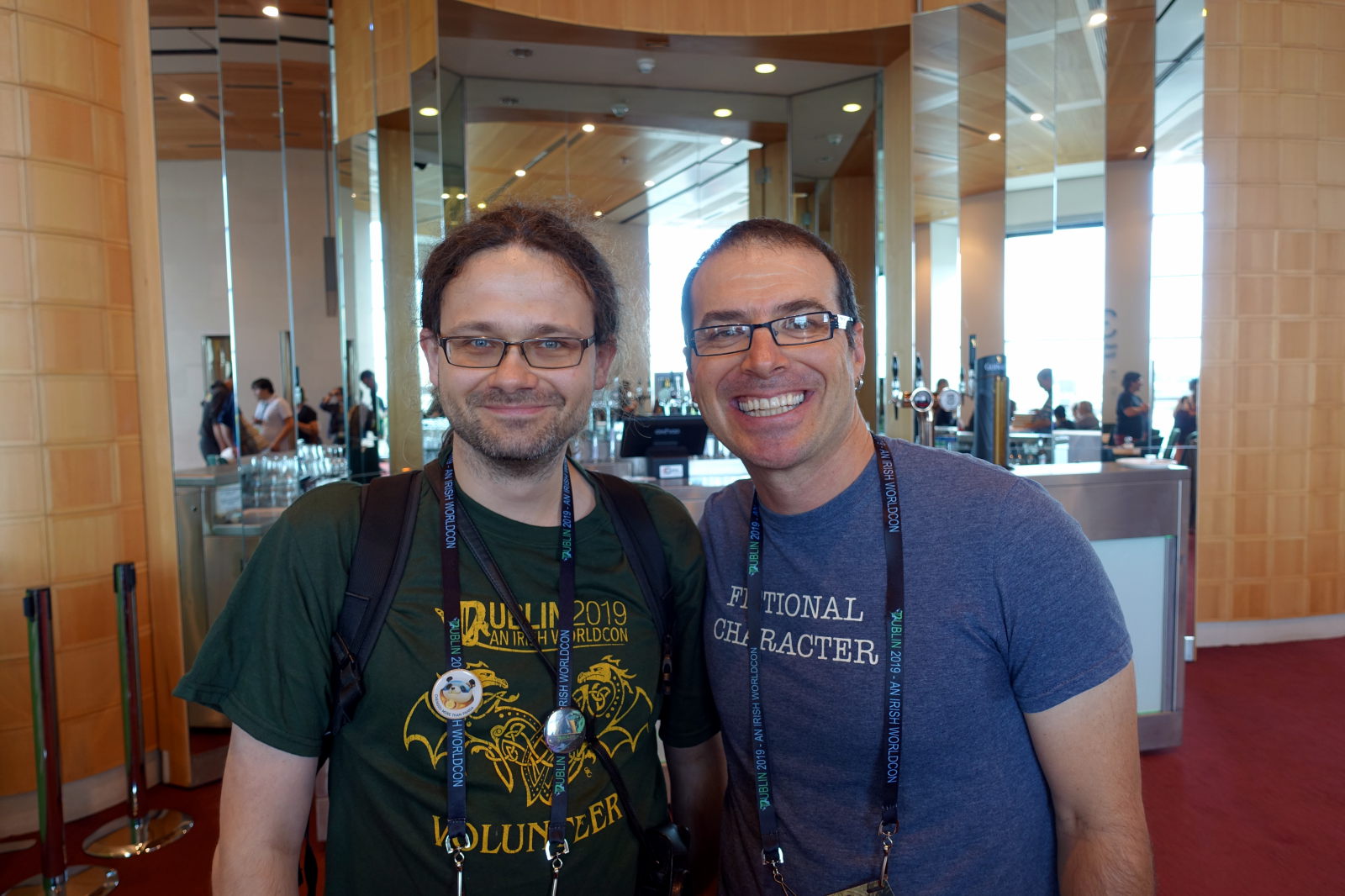 Picture with Paolo Bacigalupi taken just after the kaffeeklatsch.

The kaffeklatsch had been dominated by a few participants, but still the answers Paolo gave were really interesting. I even took my courage to ask some questions and I got the replies. I am still excited about it and this suggests that there is still a true fanboy somewhere deep inside me ;).

I have the impression that this year I attended way fewer programme items than in London or Helsinki. It is, however, only partially related to the queues and more to the number of things I was involved in and to the fact that I was quite tired after Moving In and I wanted also to get some rest.

In a few days from now you will be able to read the second part of my memories from Dublin 2019 An Irish Worldcon.