In my previous post I covered some topics about Dublin 2019 An Irish Worldcon. Today, I am going to write more about Events, Hugos and Fan Funds. I already miss this convention and would like to come back to Dublin.

I really enjoyed how the Opening and Closing Ceremonies were organized. Both (but especially the Closing Ceremony) were really loosey-goosey. When I compare them to Worldcon 75 and Loncon 3, there was more humour in Dublin. I don’t mean that previous European Worldcons did not include humorous parts, but I have a feeling that Dublin 2019 decided to add way more of this particular spice. 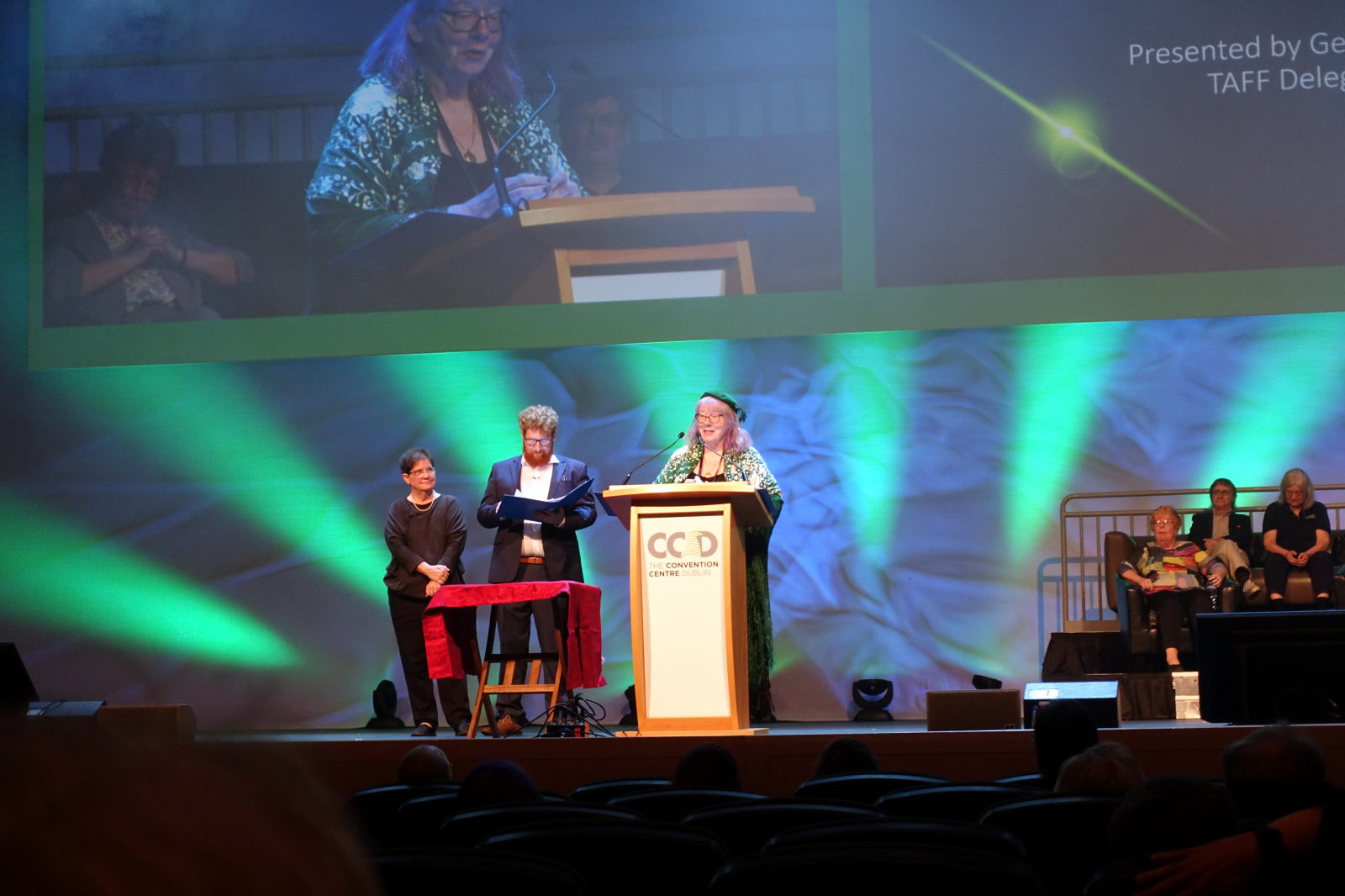 At the same time, I must mention that although Retro Hugo (a part of the Opening Ceremony in Dublin) was really nice it was not as good as Retro Hugo Ceremony during Loncon 3 which is still the best one I attended.

One thing caused some confusion among some of the fans (including me) – in order to get to the biggest events one had to collect a wristband which determined the seating place (balconies or lower level) and entry time (1 hour or 30 minutes before the event). The convention staff prepared a written information about it, but I did not read it and learned about it quite late (still, I got the wristband for every event I wanted). Some people were really disappointed by this practice (and I can understand it), but on the other hand it allowed for a better crowd management so I think it had been a good decision. 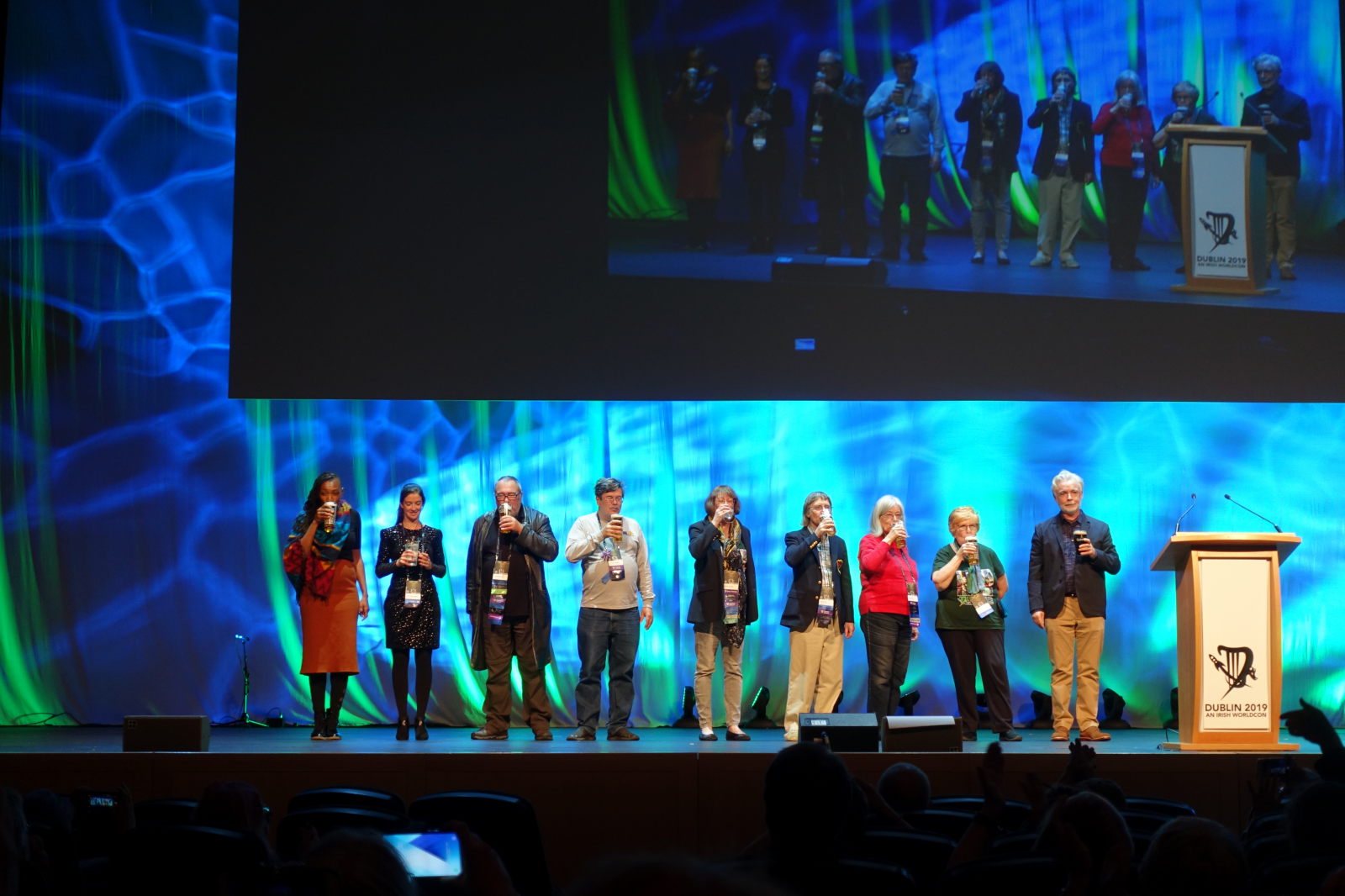 In Helsinki, I had the honour to present one of the Hugo Awards and then I had the chance to enjoy the rest of the ceremony. In Dublin, I was backstage and because of that I missed quite a large part of it. My responsibility was to take care of the winners after they accepted the award and then escort them back to their seats. Being backstage, I was not able to fully follow the ceremony and since I was busy escorting the winners around the auditorium, I completely lost a part of it. Even though, it was worth it! 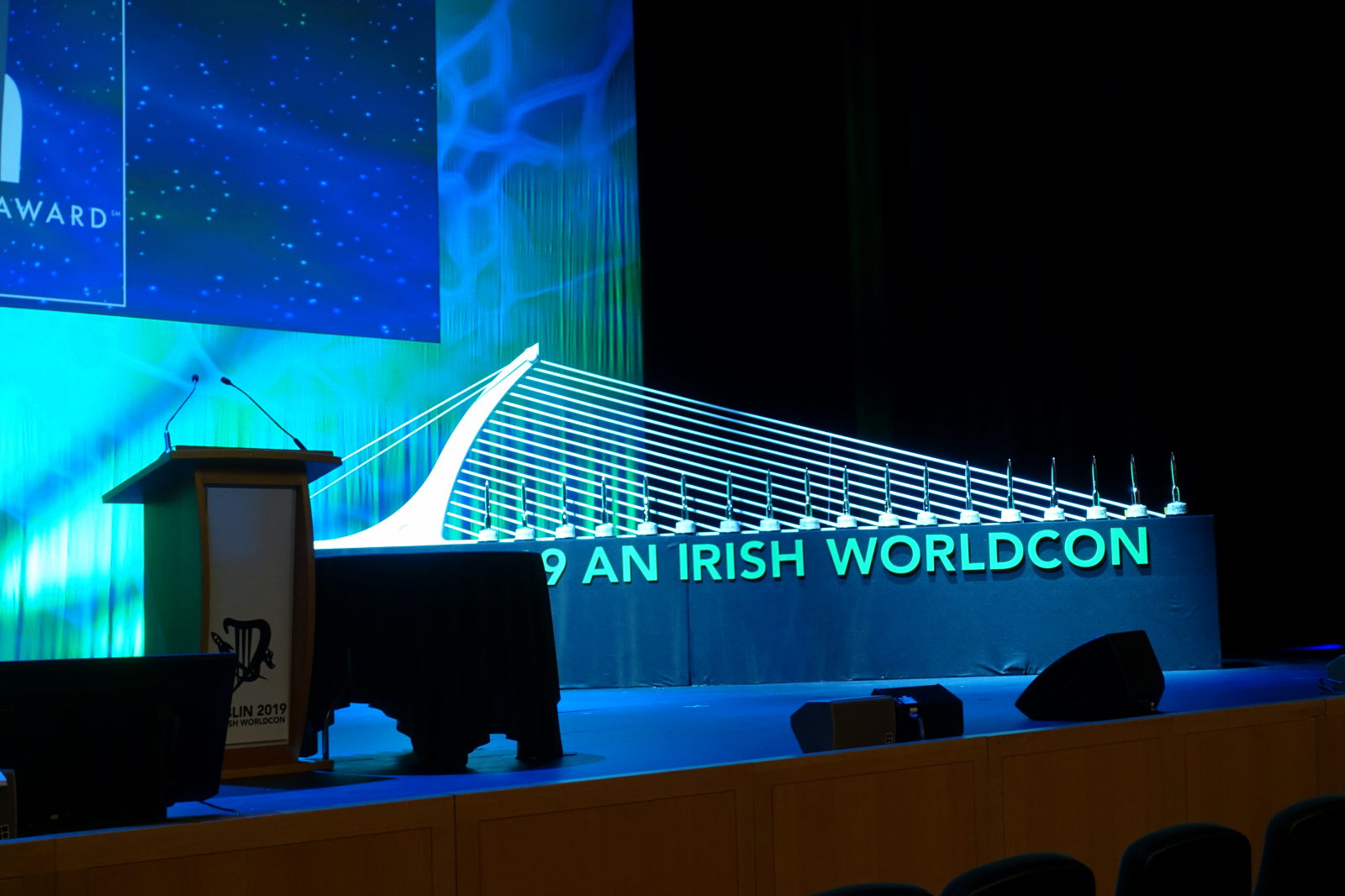 Hugo rockets on a display just before the Hugo ceremony

The joy of looking at people who just received the most important award in our genre is something I cannot describe. Some of them reacted calmly some were really showing emotion. Being able to look at them and to witness their joy was magic.

During rehearsals and during the ceremony I had the chance to watch the In Memoriam. This is a really moving Worldcon tradition. Remembering our friends who passed away is moving. This year, a part of the Irish Video Games Orchestra made a beautiful background with their music for this event (they played “The best is yet to come” from Metal Gear Solid game). 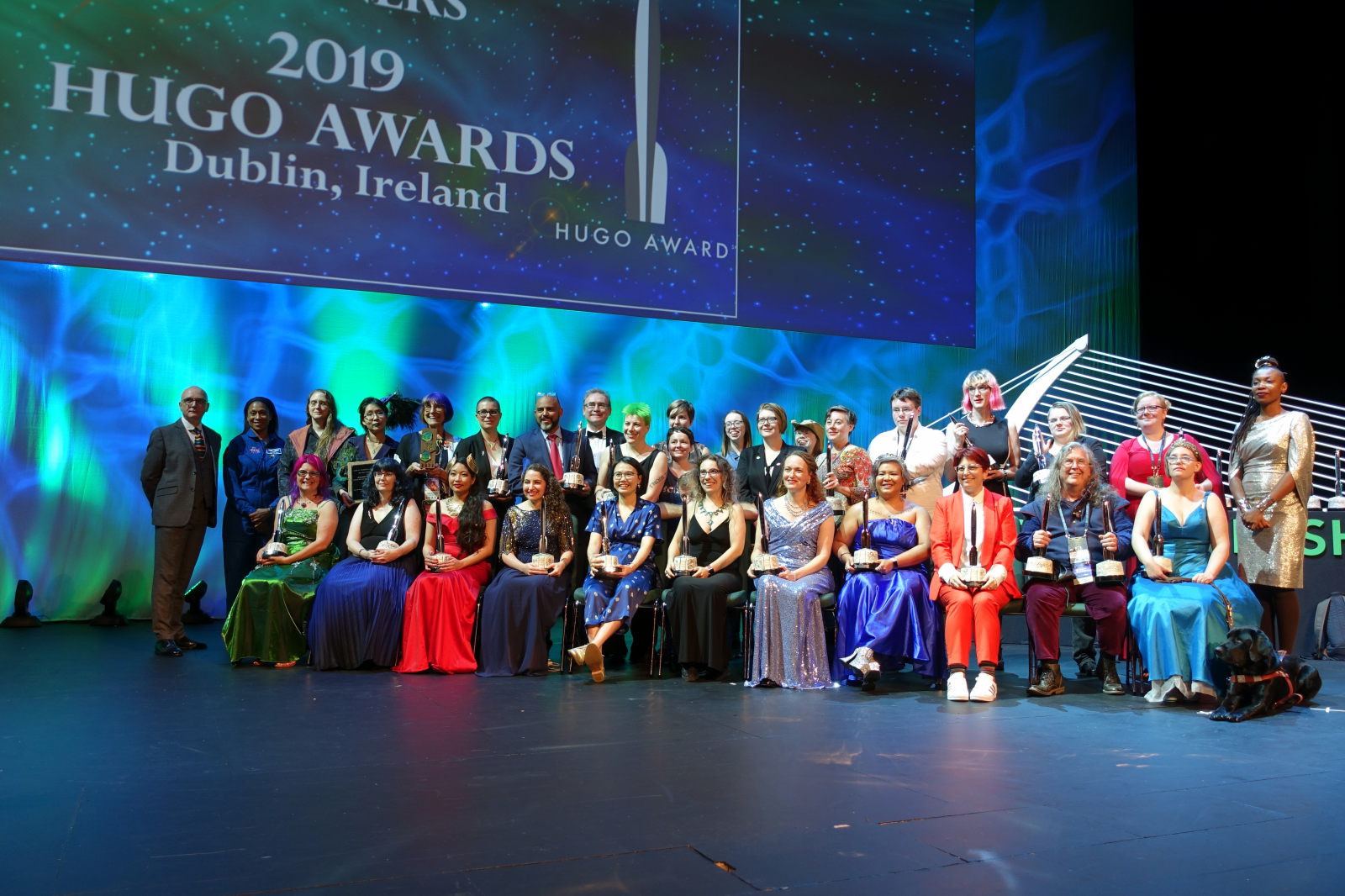 Fan Funds around the world!

I can’t write about Worldcon and not mention the Fan Funds. Thanks to Claire’s enormous help I did not get fully flooded with administrative tasks for the GUFF. Claire did a tremendous amount of work to coordinate the Fan Funds presence in Dublin 2019. Of course, I did a few things but she did way more than me.

I started with the panel called “Fan Funds around the world” where I talked not only about GUFF, but also about the emerging European Fan Fund (EFF). Later on, during the auction, we managed to sell a few items particularly for EFF and I hope we will gather enough money to send someone to Futuricon in Rijeka (Eurocon 2020). 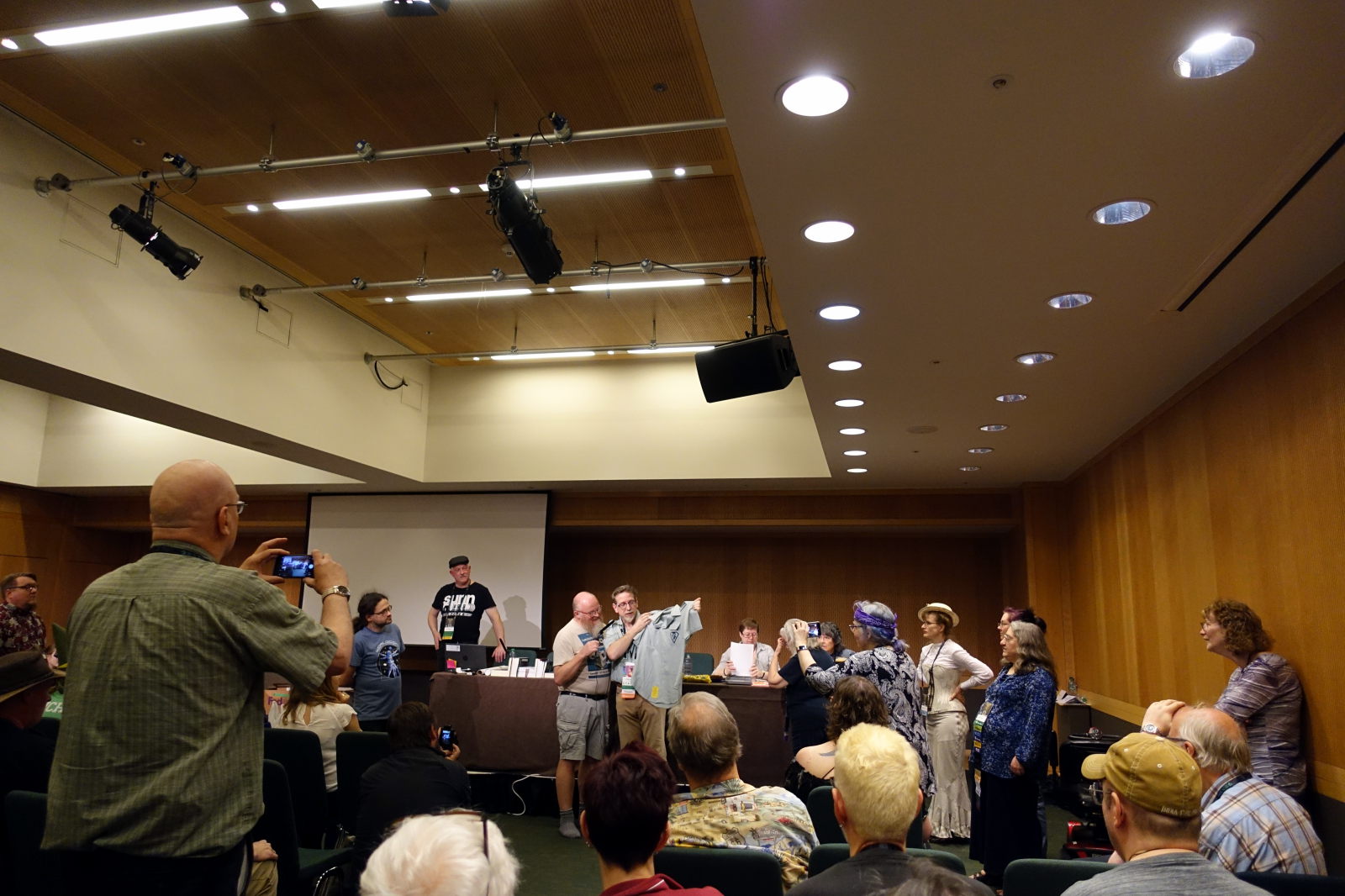 James Bacon presenting his donations to the Fan Fund auction.

The Fan Fund auction itself was nice. It finished quite quickly (well, it lasted as long as it should – the time simply flew by very fast). We managed to gather over 2,300 Euros and this is an excellent result! After the auction (on Sunday and Monday), we had a table with remaining items (and some trip reports including mine), where we gathered additional 1,000 Euros. It is always great to see that the fannish generosity help new fans to travel to another parts of the world to meet the fans there.

What I regret is that I didn’t have enough time to chat with the GUFF (Simon Litten) and TAFF (Geri Sullivan) delegates. We managed to exchange a few words, but I regret it was so brief. 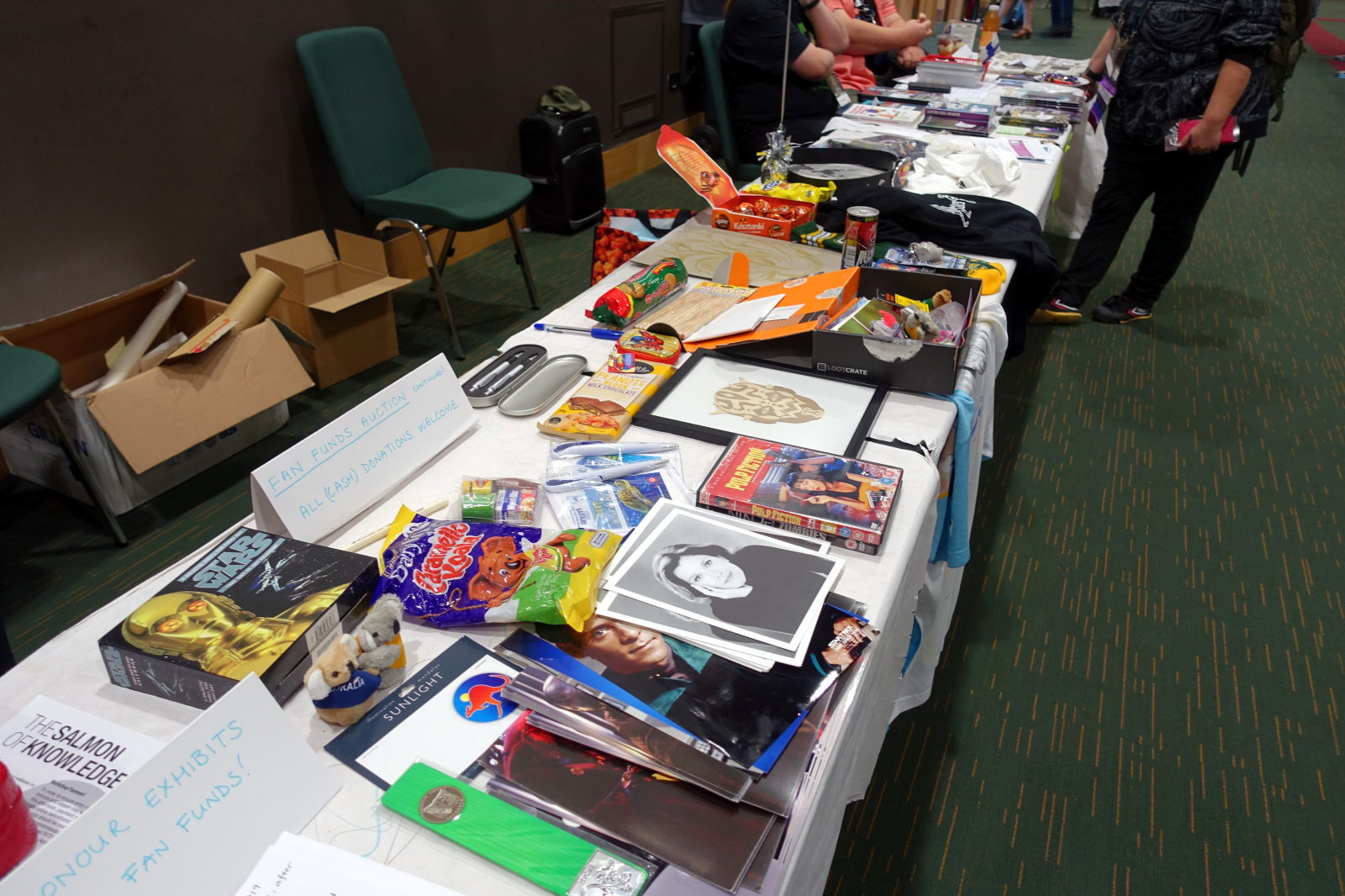 Fan Funds’ table allowe us to sell what we did not manage to auction the day before.

So how was the Dublin 2019 An Irish Worldcon? It was really great! I enjoyed myself immensely during the programme and before the con, when chatting with people or working with them. This report is way too short to include everything, so I would like to ask you to believe me when I say that I had a great time. I probably won’t make it to CoNZealand next year, but I hope that either in 2021 or 2022 I will manage to visit the next Worldcon.

The next post will be published on 19th September.