A few years ago, I somehow learned about The Enchanted Duplicator. I found this book of extreme relevance even to nowadays fandom and I really enjoyed reading it. Knowing this, it may be no surprise for you to hear that when Geri Sullivan, the TAFF delegate, announced a trip backtracking the history of Irish Fandom (or parts of it), I had to participate in it. The tour took place on Thursday just before the Eurocon TitanCon (in fact, we had to miss first hours of the con).

Our first stop on the trip was the Oblique House in Belfast (170 Upper Newtownards Road). This is the house where Walt Willis lived with his wife until 1965 and where the meetings of Irish Fandom took place. The house is now owned by a non-fannish person but he agreed to meet us in his front yard. I can only try to imagine how you may feel when someone contacts you asking for permission to get a tour to your front yard… Yet the current owner was kind enough to allow us to visit his place. We had the opportunity to watch it from the front yard and to make pictures at the entrance. Geri provided our host with some presents including a copy of Warhoon 28 where the Oblique House is portrayed on a picture by Bob Shaw (page 24). 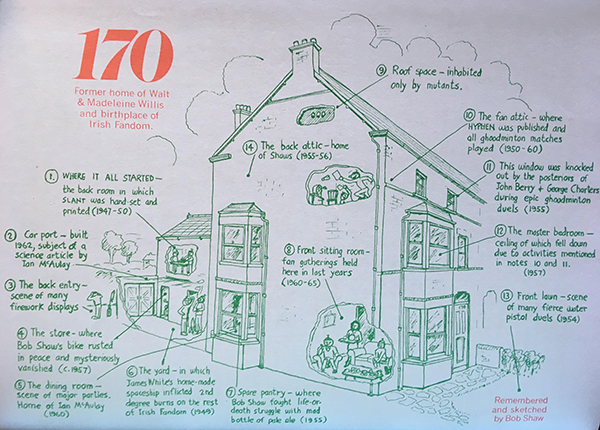 The Oblique House as portrayed in Warhoon. Picture is taken from Dublin 2019 blog.

One of the interesting things I learned about it was the story of a time capsule. During the house cooling party in May 1965 the members of Irish Fandom put a time capsule somewhere among the roots of a cherry tree in the front yard. The capsule was made of glass and it contained the 1st edition of The Enchanted Duplicator and some other fannish memorabilia from the period. As far as we know, the capsule was never dug out and considering it was made of glass, it may have survived the conditions underground. 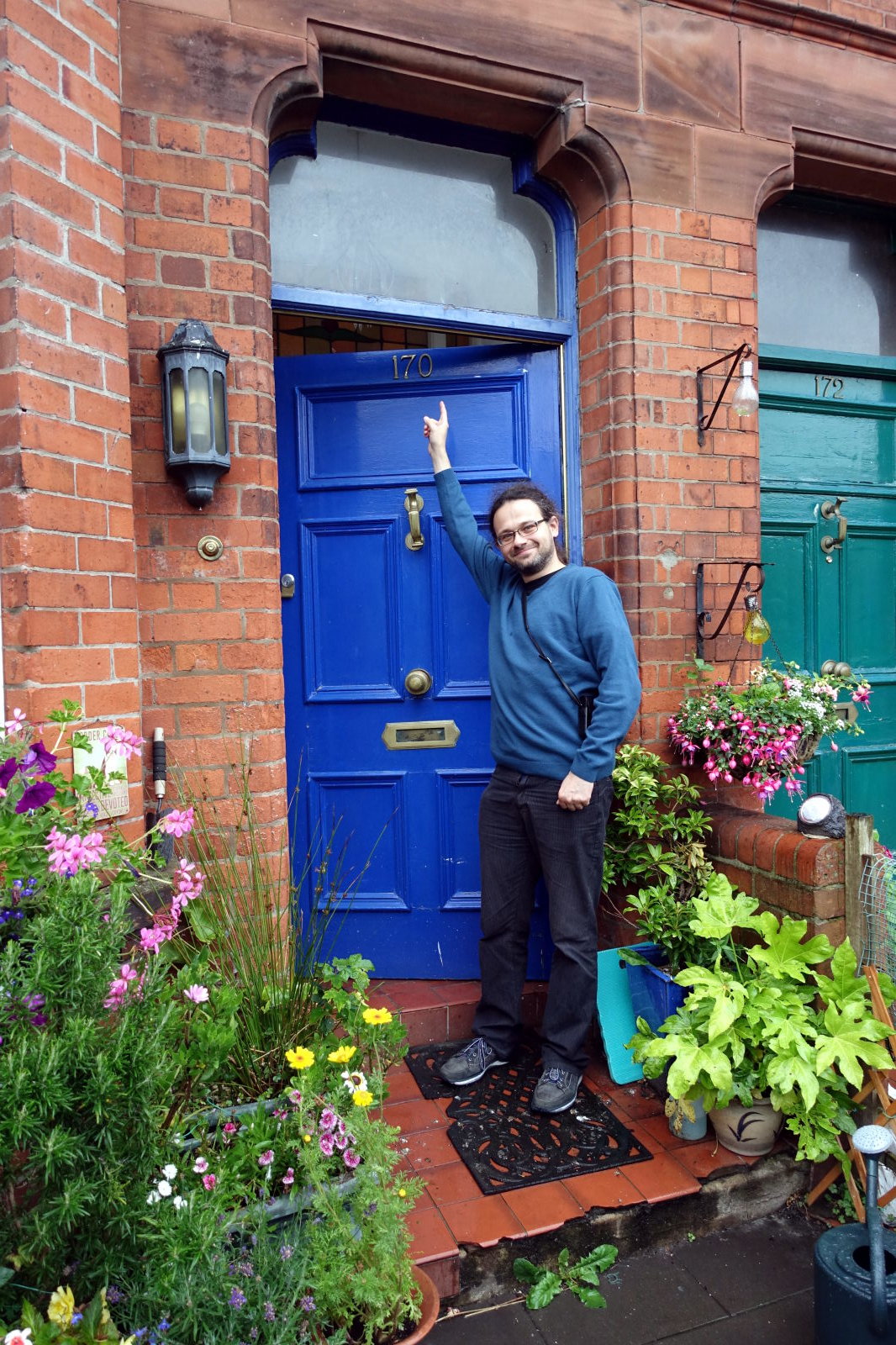 Myself in fron of the Oblique House.

The Scrabo Tower aka Tower of Trufandom

After our visit to the Oblique House we moved forward to see the Scrabo Tower which was the inspiration for the Tower of Trufandom that appears in The Enchanted Duplicator. We had to get from the parking place to the tower itself (it is a relatively short, but steep road). On the way, Geri talked about her previous visit there. When we got to see the tower, the view was magnificent. On our way up, there was a fog surrounding the tower that gave it a really unreal, dreamy atmosphere. Afterwards, when we took enough pictures and were heading back, the fog disappeared giving us a better view of the tower and its surroundings. 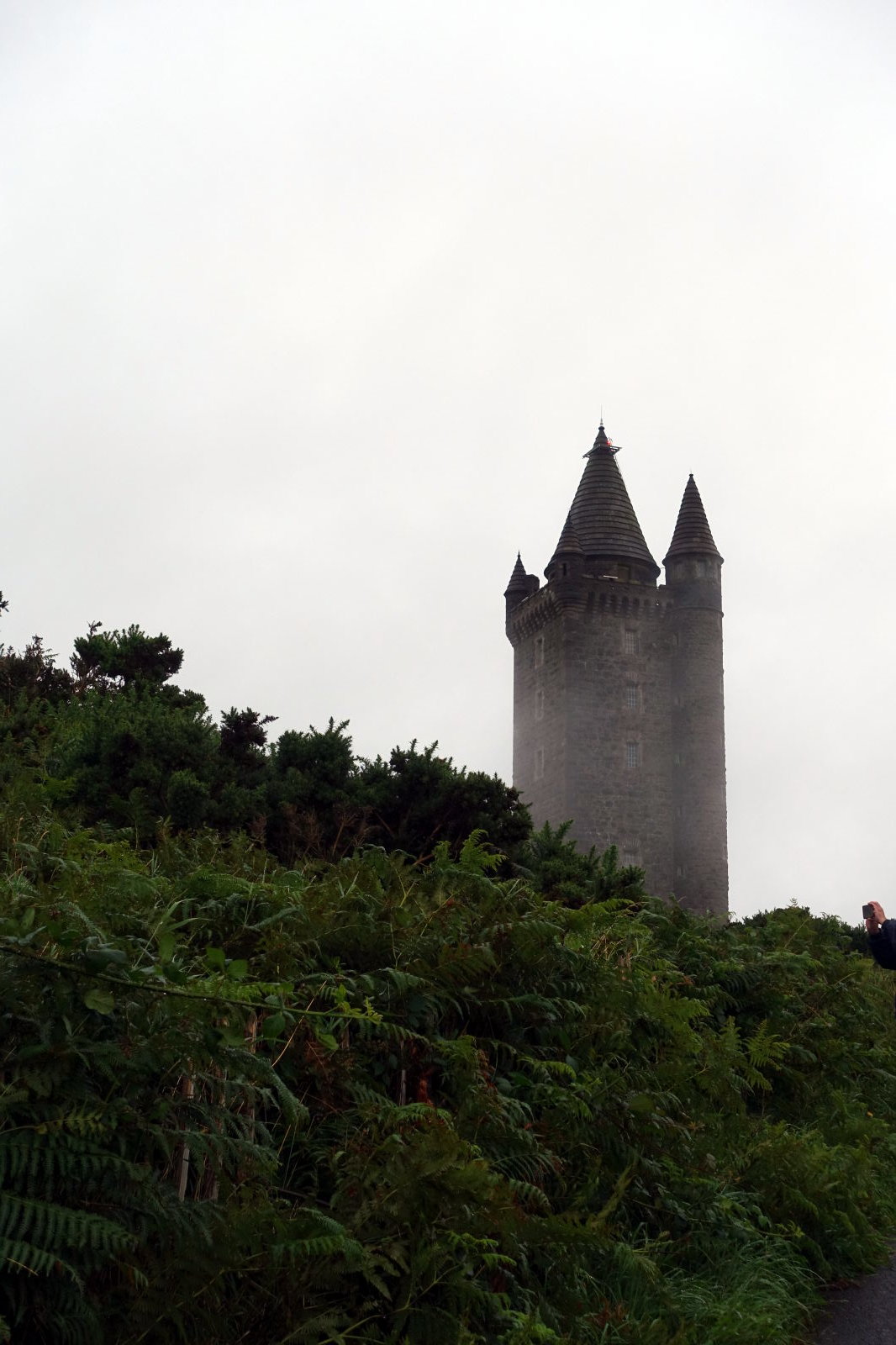 I can recommend a trip to this place for both fans and non-fans – the view is really nice. I did not get the chance to go into the tower (it is closed on Thursdays. It is a pity, I imagine that the view from the top must be really breathtaking.

After the visit to the Scrabo Tower we headed to our last stop – Donaghadee – where Walt and Madelaine Willis moved to after leaving the Oblique House. Here, we did not have the chance to meet the new owner of the house, so we just watched it from outside while listening to Geri explaining about her previous visits here. 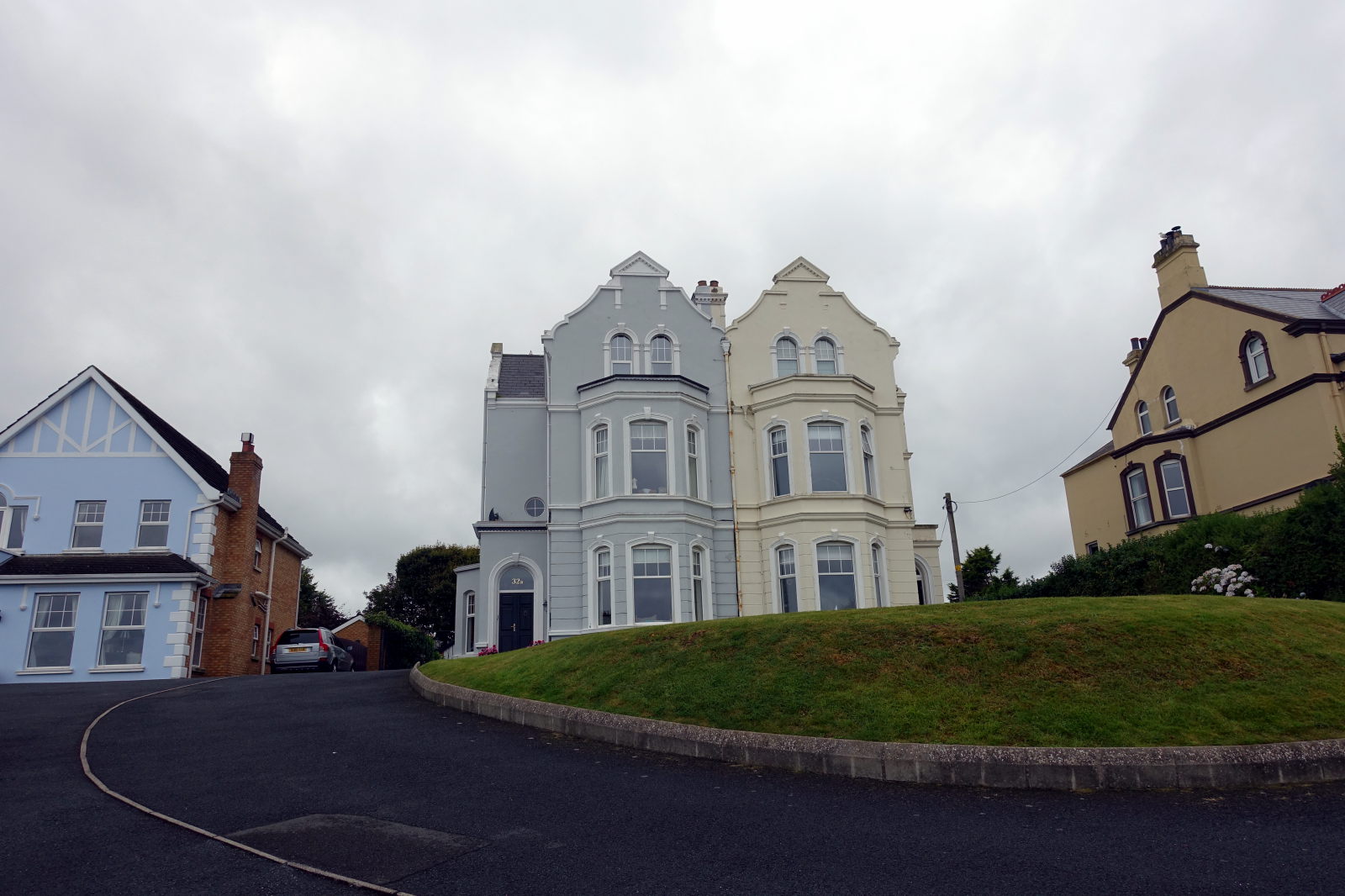 The blueish house in the center is where Walt and Madelaine Willis lived.

After seeing the house, we had free time and somehow a large part of our group landed in Grace Neill’s Bar – one of the oldest pubs in Ireland (est. 1611). Here we ate lunch talking about our trip and other fannish (and not only) matters. Lastly, we had some time to do a sightseeing in Donaghadee, so I took the time to visit the harbour with its lighthouse. On my way there I found a local small bakery where I tasted a caramel slice with home made caramel – it was delicious ;). 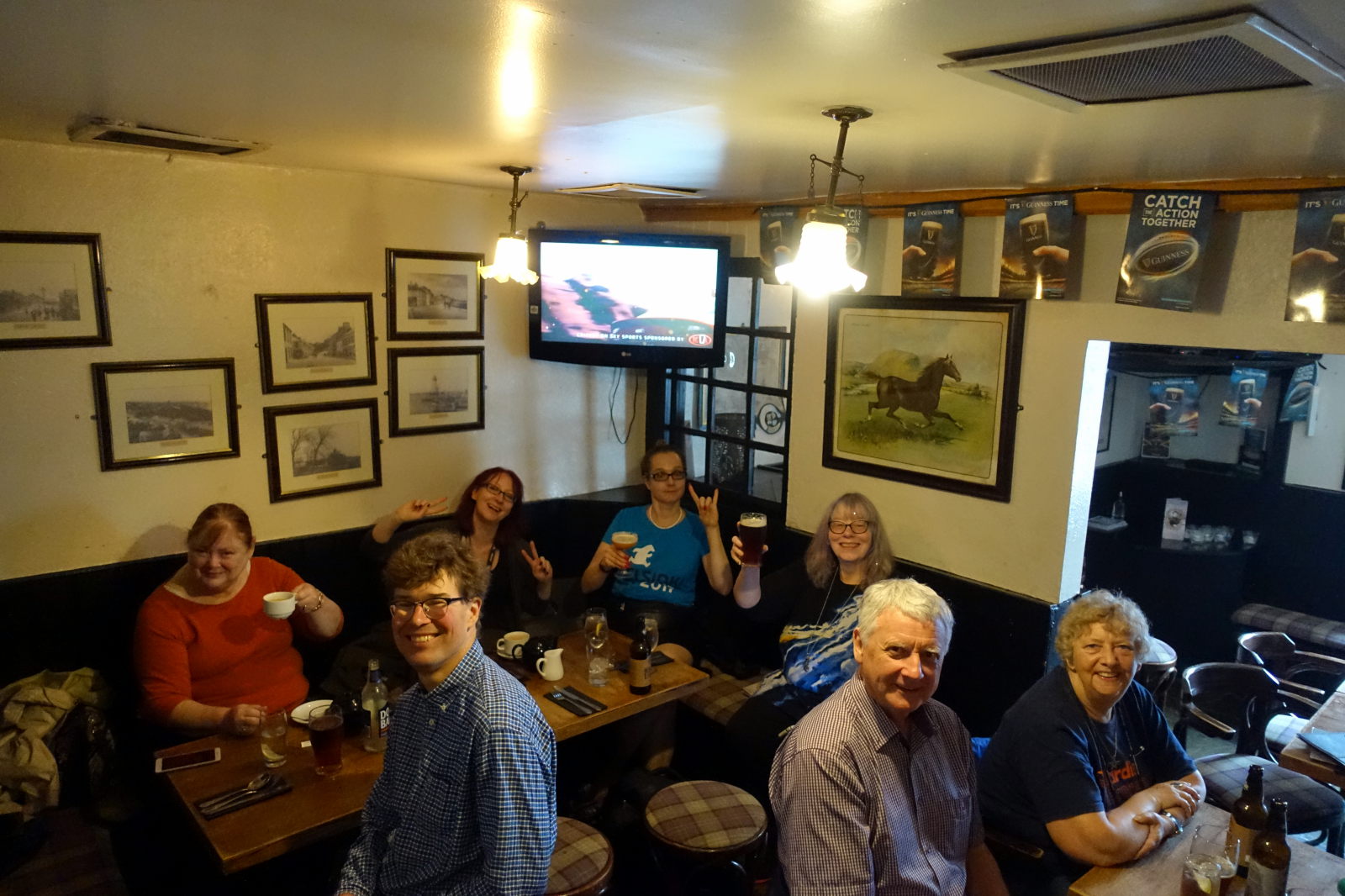 Our group in Grace Neill’s Bar.

We had two very short stops on our way back (we did not even get out of the coach). The first stop was to see the last house of Walt Willis and the second one to see a house where C.S. Lewis spent his honeymoon.

I believe it was Geri who printed out the copies of a short fannish story – the Exorcists of IF by James White. I received one copy close to the end of the tour and I read it – a simple and wonderful story about… fans. 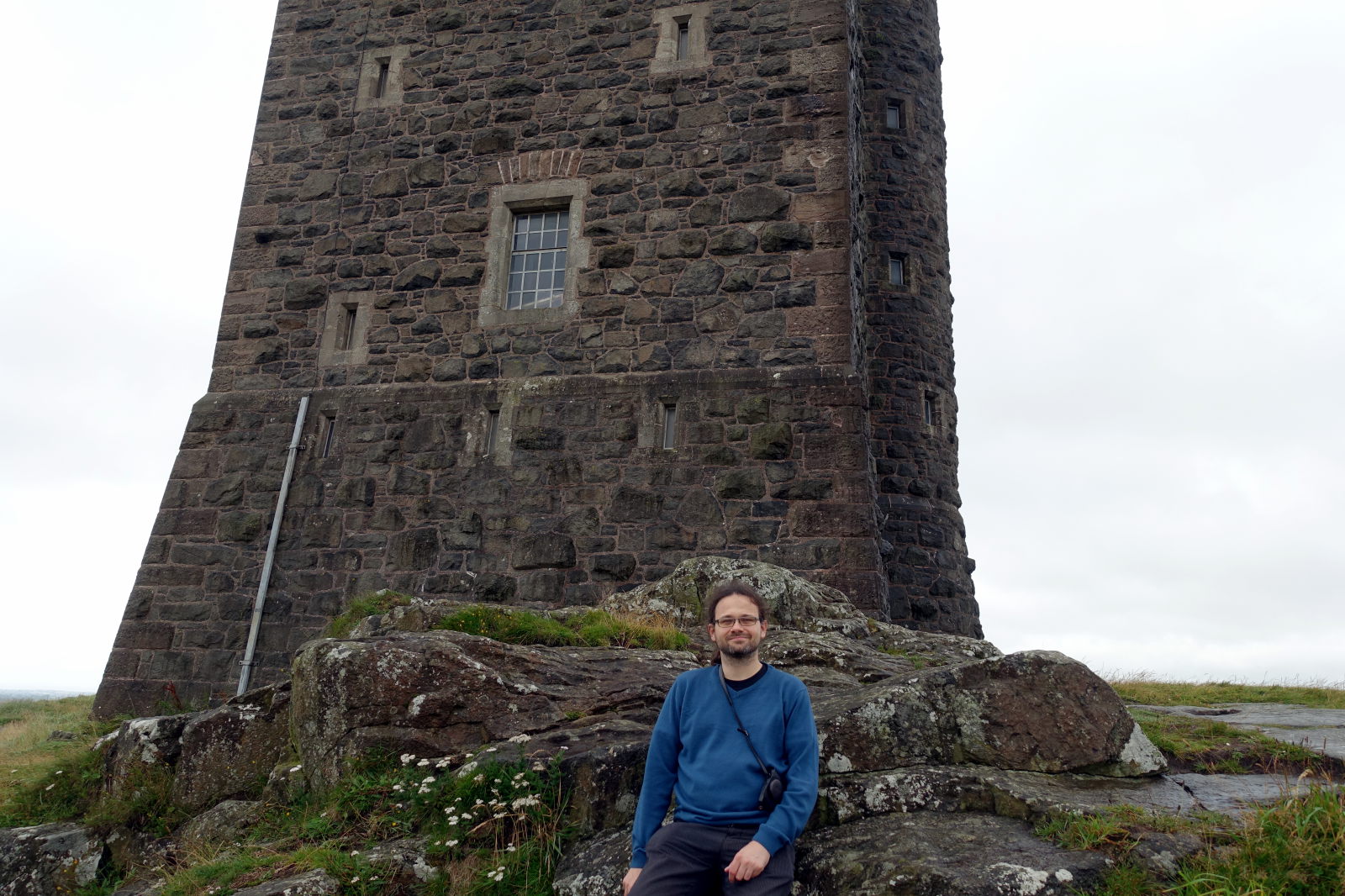 Fandom Rover in front of the Tower of Trufandom

Of course, there were a lot of conversations in the coach. I participated in some of them, I listened to others and close to the end of the tour I fell asleep, missed the rest. I would like to thank Geri for organizing this tour – it was really interesting and I know that I would not be able to visit those places on my own.

The next post will be published on 26th September.