The best thing about Eurocon happening after Worldcon is the fact that you can have a convention marathon, but at the same time this is the worst thing as marathons in general are exhausting. This years’ Eurocon took place one week after and around 170 km north from Dublin 2019 Worldcon and it had both the advantages and disadvantages of happening just after Worldcon.

Late start for me

Although Eurocon started on Thursday around 3 PM, I had to wait for it a little bit longer. This is because Thursday was the day reserved for the trip backtracking Irish Fandom I described in my previous post. I managed to arrive to the Hilton (where TitanCon Eurocon was held) closer to 4 or 5 PM. I was really hoping to attend Filk Session but… Unfortunately I was simply too tired and before it started, I decided to go back to the place I stayed at to get some rest. 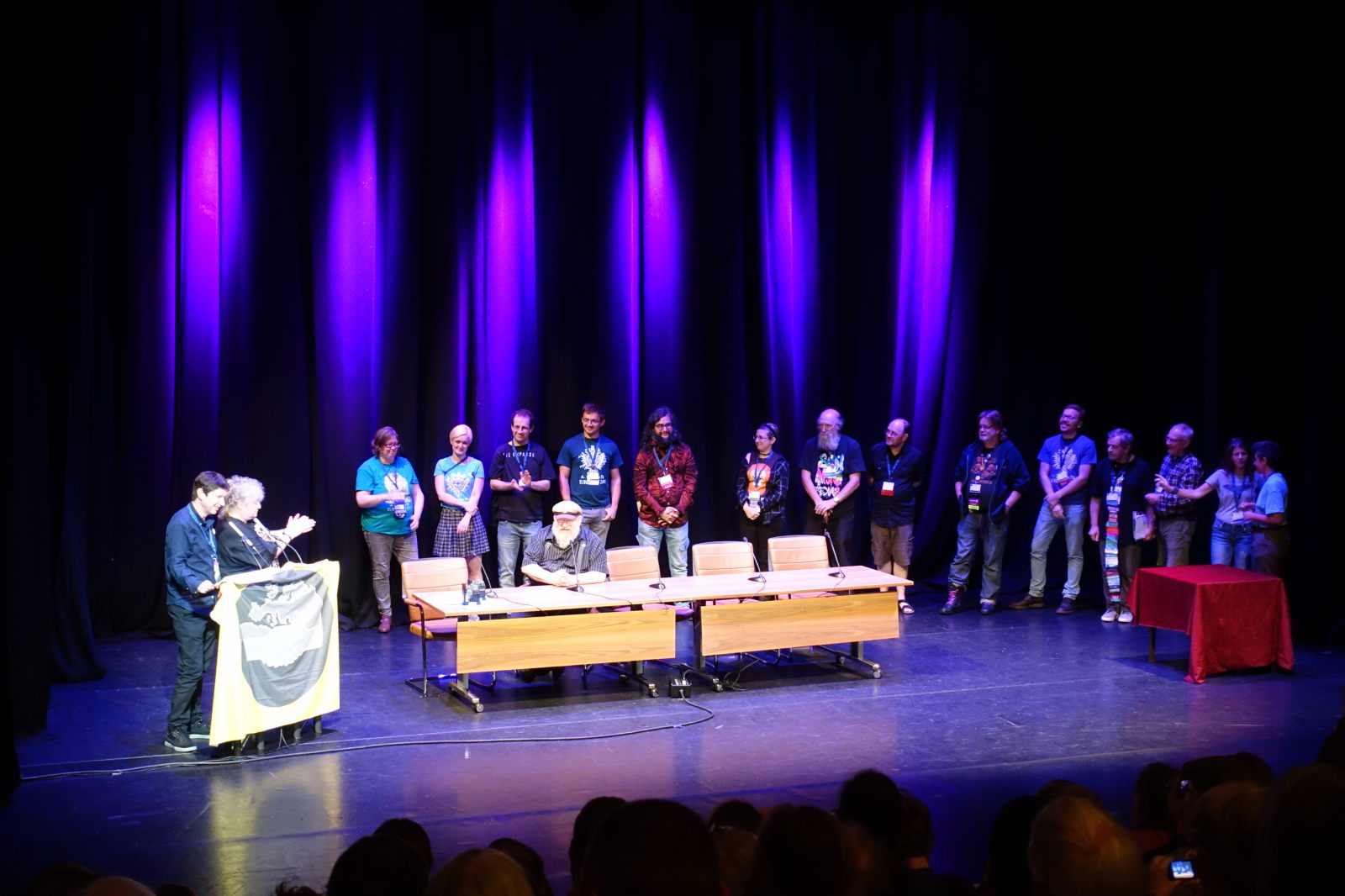 I did not make it to the Opening Ceremony but here is the picture form the Closing Ceremony.

To my excuse I may add that the day before I visited Hilton for a short meeting of the committee and later on I went to a pub meeting that local fandom held with the TAFF delegate – Geri Sullivan. The pub evening was nice even if it was a little bit short. I also got to meet some people who, like me, went for the Irish fandom trip the next day.

At Eastercon this year I talked with Carolina (Eurocon’s chairperson) and Pebble (taking care of a few things including merchandise) and somehow we agreed that I would help with organizing the t-shirts for TitanCon. The decision was made that they would be printed in Poland. Arranging everything took some time, but I am happy I was able to help. Because of my help I am listed as a committee member, yet I have the feeling I didn’t do enough to deserve this title – I just helped a little bit. 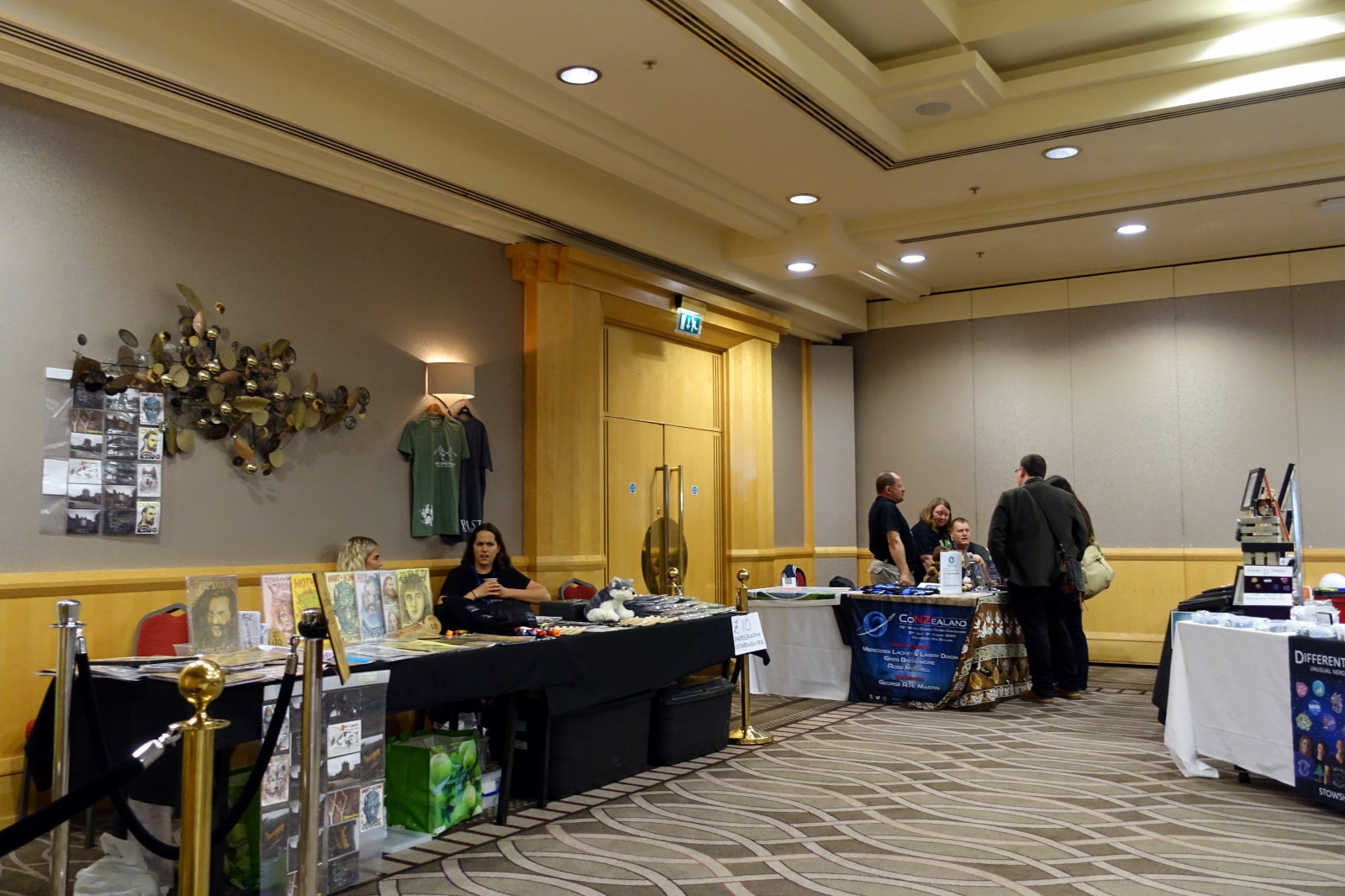 Our merchandise table was located just next to the table of Odin and Thor and their caretakers – here to the left.

Yet this helping was somehow important to me. TitanCon was looking for people who can be involved with it in the future and although I live far away from Belfast, I was really tempted to sign in and help again…

Not too much programme for me

As a person responsible for t-shirts I have helped to man the table with convention merchandise and it consumed a part of my time. I was also generally tired after Dublin and the convention was relatively short as the scheduled programme ended on Saturday evening. All those circumstances resulted in me not attending too much of the programme.

When I am looking now at my plan it seems that I listened to items mainly related to fandom – first ESFS Business Meeting, panel on Northern Irish Fandom, Comparative Conventioneering talk, Eurosmof panel (I was a panellist here) and presentation of the next two Eurocons. On top of that I managed to visit Dramatic Readings from the Ig Nobel Prizes, the concert and the Closing Ceremony as well. 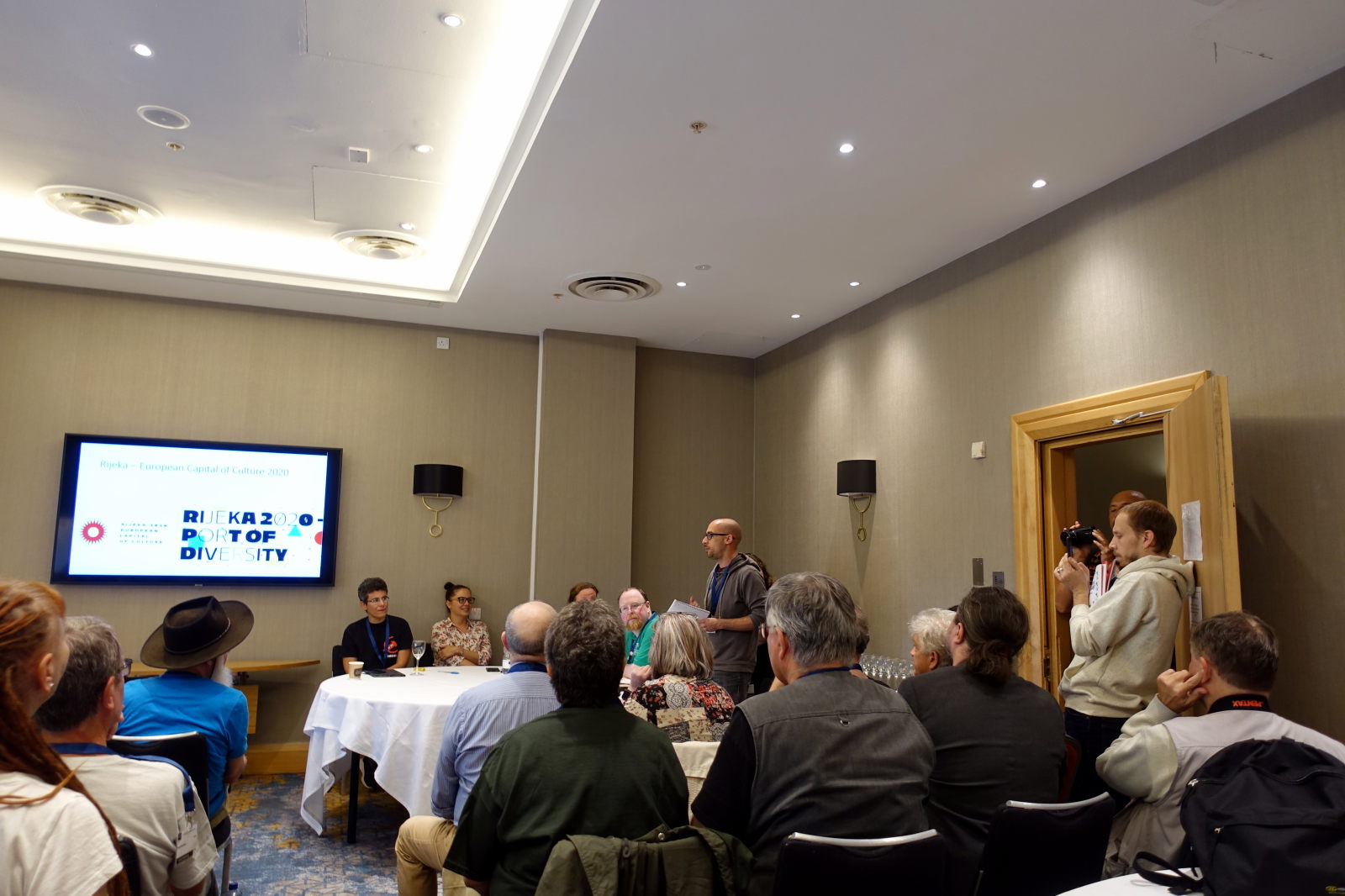 The concert performed by the Irish Video Game Orchestra was amazing. They played both some well-known musical pieces and some that I have heard for the first time. Initially, I planned to be thereuntil the break and then would leave, yet after the first half I was really impressed and decided to stay for the whole concert. This way I missed the DisCon III Worldcon party.

One does not simply leave dealers’ room empty-handed

Although TitanCon Eurocon was relatively small, there were excellent dealers present. I really enjoyed two of them and if not for limited space in my luggage, I would probably buy more than only one piece. 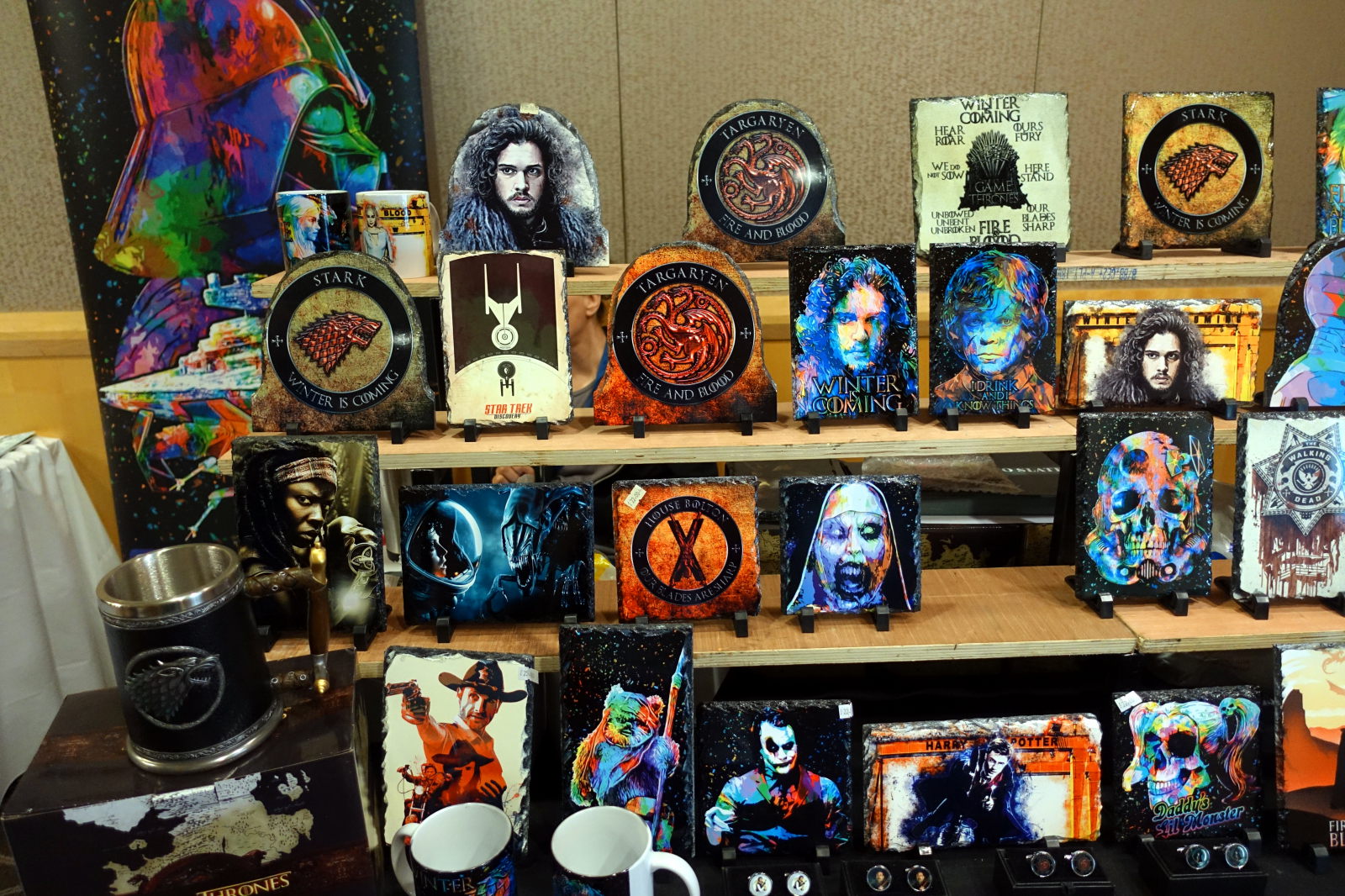 I bought a BB-8 portrait printed on a rock slate. It was available from the Black Halo Design table and they had really amazing works. I walked past their table many times (it was conveniently located just next to the entrance) and each time I spent some time looking at all the amazing works they offered.

The second dealer whose merchandise was really tempting, was Component Crafts. Unfortunately, after looking at all the displayed art, I decided it would be too fragile to pack it in my suitcase that already barely closed. This artist reuses some old electronic components in order to make geeky art. Here I must mention that it was also this artist who created the astounding Eurocon Awards. 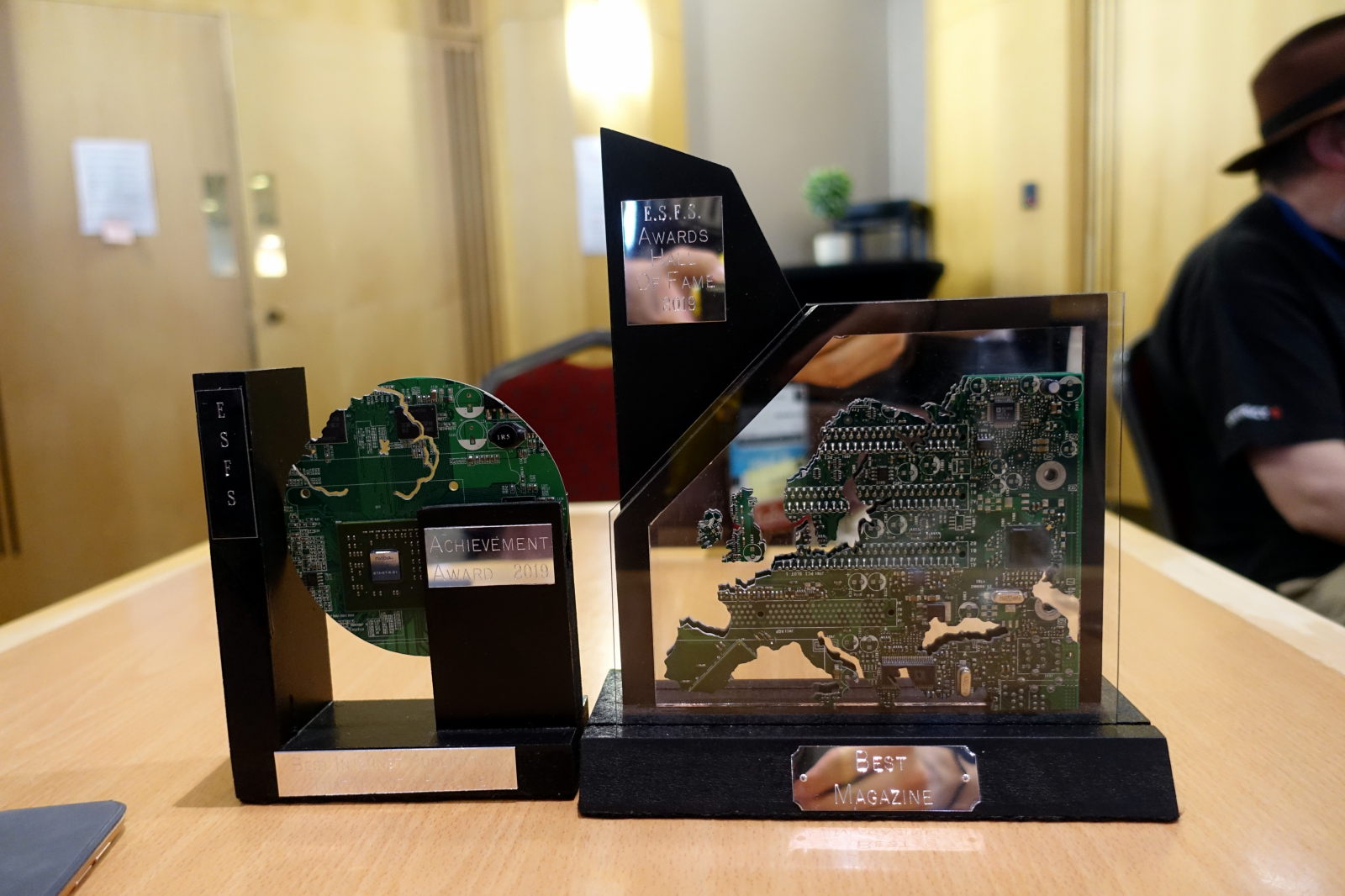 It was the Dealers’ room where the two direwolves from Game of Thrones were spending their time. The dogs, Odin and Thor, better known as Summer and Greywind form the HBO TV series were at Titancon. Together with their caretakers they spent large part of the convention in this room. Everyone was able to either take a picture with them or buy some GOT items offered by their caretakers. All in all, I decided that I won’t take picture myself as I was afraid that the whole day at the con with people constantly petting them may be too tiring and stressful for the dogs.

Although the TitanCon Eurocon ended on Saturday, the next day was full of things offered by the con. In the morning, there was a Coach Tour and in the evening the feast. Unfortunately, I was not able to participate in the latter. The tour can be described with one word – amazing. 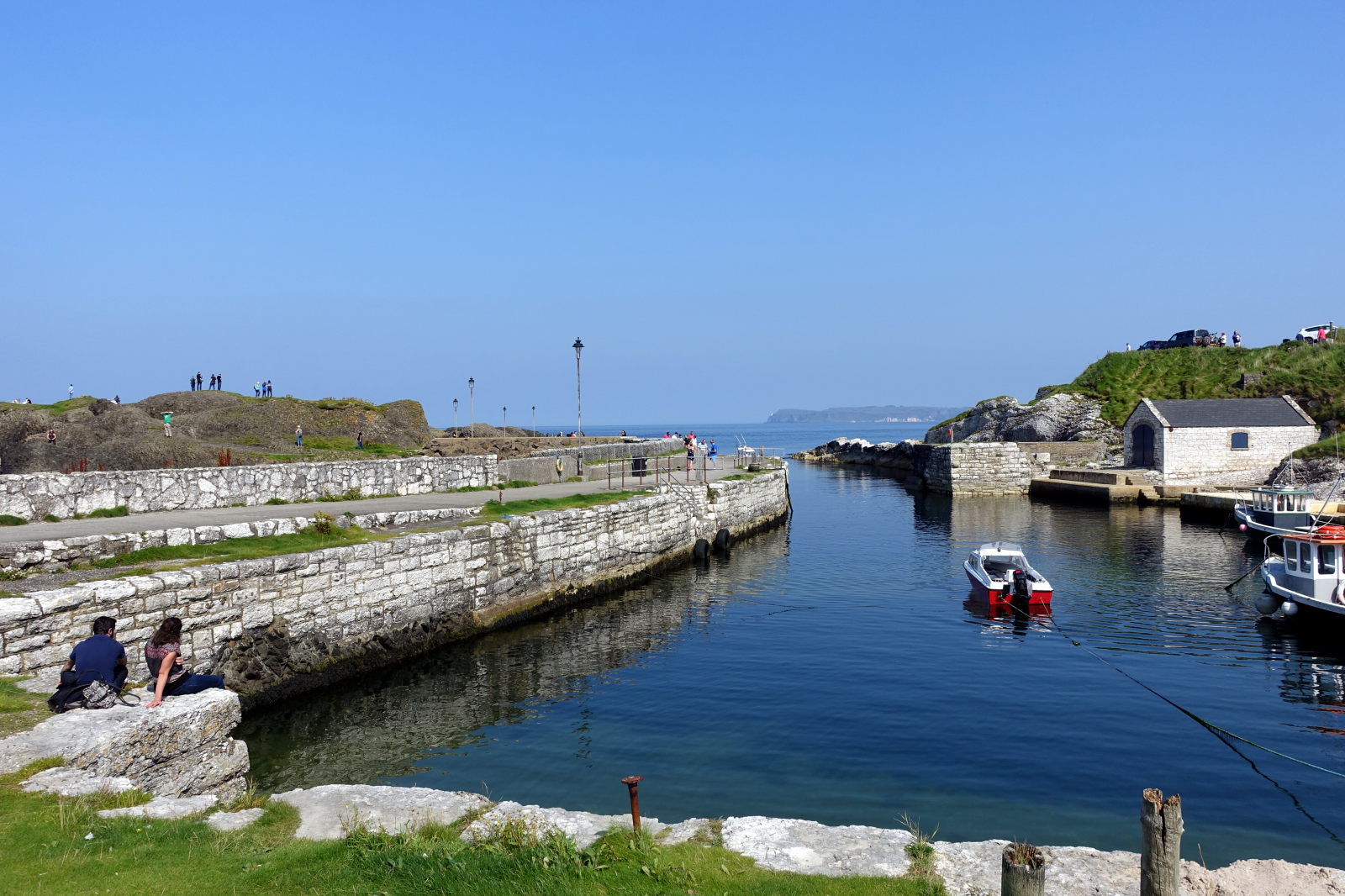 We started with Giant’s Causeway. The weather was perfect and the views magnificent – only this stop was enough to make this a memorable experience. After seeing those fantastic rock formations, we moved forward to the next stop – this time it was a place featured in the Game of Thrones TV series – Ballintoy Harbour. This place was nice, but not as great as the first stop. Next, we planned to go to Larrybane Quarry, but for some reason it was closed on that day so instead we had a very short stop to see Dunluce Castle (it functioned as Castle Greyjoy in the GOT TV series). The castle looked interesting, but unfortunately we watched it only from a distance (and for a very short time).

If Eurocon hadn’t happened just after Worldcon, I would probably do more things at the convention. I had to rest a little after all the previous events and therefore I missed most evening activities. Still, even taking this into account, I had a good time. I met some people and learned of new artists and lastly – I enjoyed myself. Now I am thinking whether it would be possible to attend the regular TitanCon sometime in future…

The next post will be published early in October.