Ytterbium was my second Eastercon and this time the convention was completely different experience to me. Last year, when I attended Follycon, I had had the feeling that I knew almost no one. I had been a candidate in the GUFF race and I was trying to find my place at the con. This year I knew more people and I was crazy busy with doing a lot of things.

P stands for “Probably there was a programme”

I exaggerated a bit, but I didn’t have too much time for attending programme at Ytterbium. I managed to visit Opening Ceremony and a few panels (including the one where I was a participant) but that was (almost) all. The panel I will remember for the long time was called “Sexism in SF/STEM, Equality, and Diversity”. I was sure I was prepared for it. I knew there are a lot of problems yet the histories shared by panellists left me devastated. It is beyond my comprehension how come that so high in the academia there are so many sexual predators. 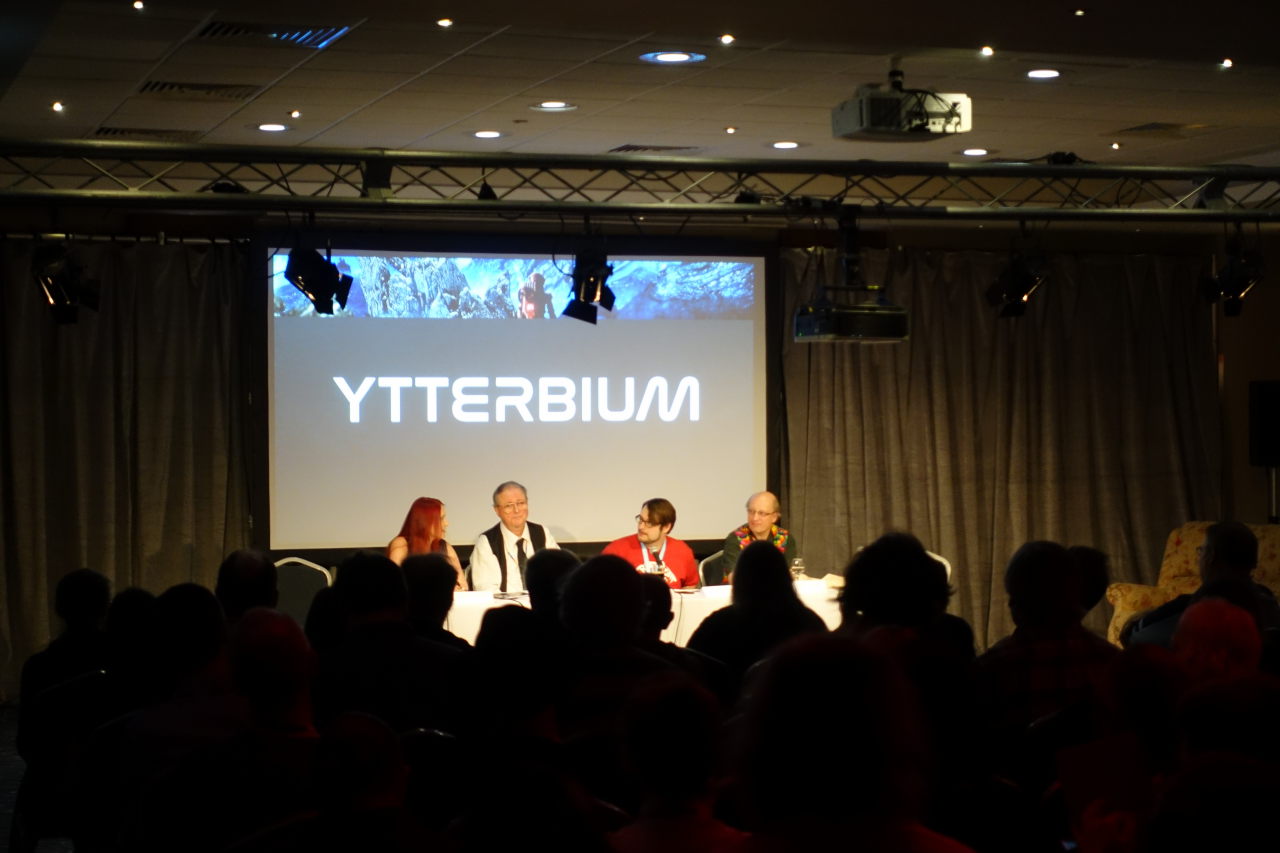 One of a few panels I have attended.

There were some items other than panels that I had the chance to participate every day. Those were filk circles. Even on Friday when I was exhausted after waking up at 3:45 AM I managed to come to the circle for a dozen minutes or so. I did not stay long but at least I got to listen to some filk. On Saturday I decided that I would sing my only filk. I was stressed – it was my first time singing my own song in a filk circle. I had the impression that it was received well. This is one thing I really love about filk circles – you feel welcome there, you can feel safe and people attending them share their love of the genre and music. I know I am not a good singer, but here it is ok for me to perform – thank you for that, fellow filkers! 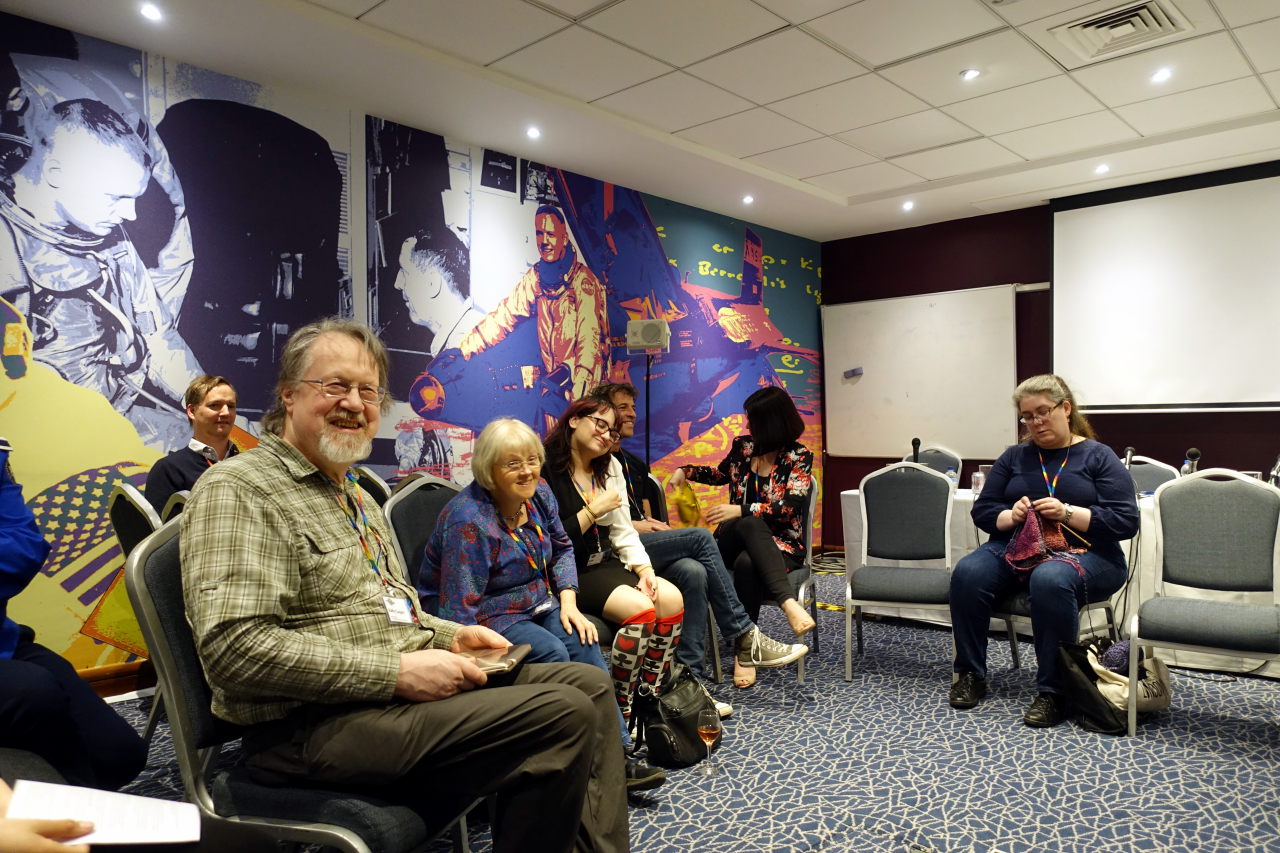 As stated above – last year I was a GUFF candidate, but this year I attended Eastercon as the GUFF administrator. This means I had more responsibilities. Thankfully, Claire was kind enough to help with GUFF and TAFF activities again. If it wasn’t for her, I would have no idea how to manage all my GUFF duties. Claire took care of voting organization, among many other things. 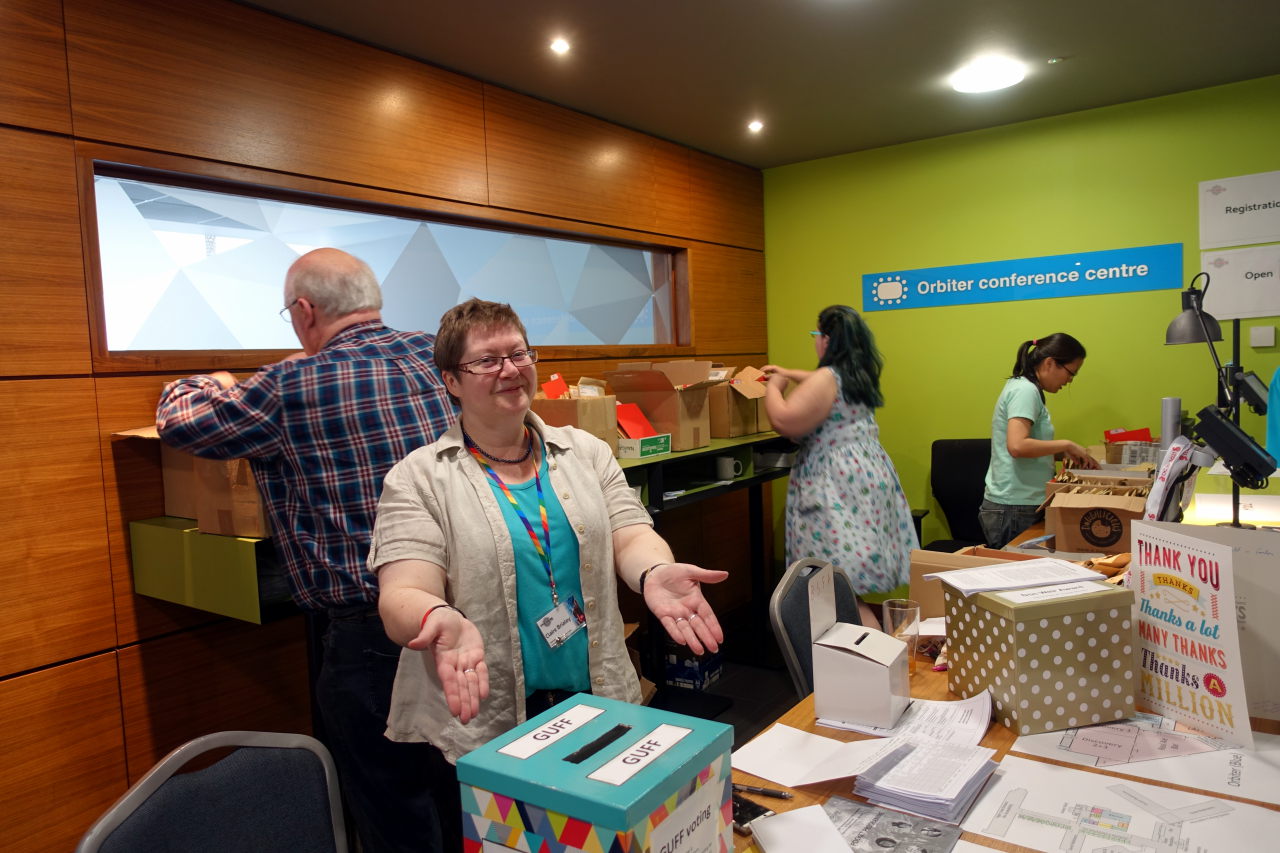 The Fan Fund auction was a collective effort. Johan, Kylie, John, Jim, Mary and Claire put a lot of work into organizing the auction, but it was a success thanks to the fannish generosity – both in terms of items’ donation and auctioning itself. All in all, we raised over £1,000 during the auction. It is pretty amazing!

On Sunday and Monday we ran the Fan Fund table and here again we managed to gather some money for the next GUFF and TAFF trips. Manning this table was one of the things that dragged me away from participating in the programme. Here I must mention that my trip report from last year was available at Ytterbium and it was being sold at the table. I hope it will make a good read for everyone who purchased it. 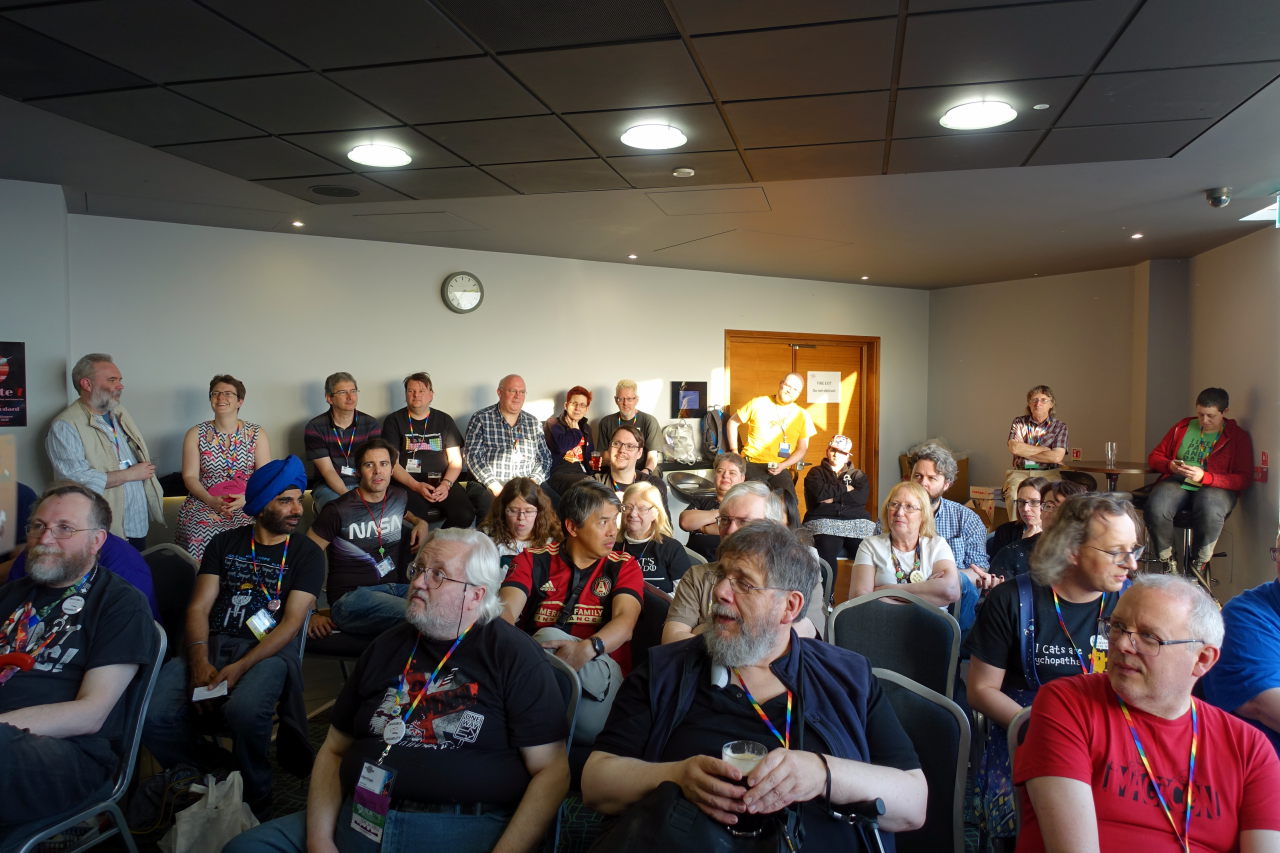 I was too busy during the Fan Funds Auction to take pictures so this is one taken just before it started.

And speaking about Fan Funds, once again I want to thank all the fans who supported us. Those who donated items, who bought them and of course also those who donated money to the funds.

Lastly, I managed to speak a little bit about the European Fan Fund concept and a few fans already decided it is a good idea and we got some donations – this means now I have no choice but to make EFF happen 🙂

I have a feeling that I overdid a little with the things I did at the con. Next time I need to make better decisions on what I can help with. As mentioned already, Fan Funds took me a lot of time and they were so much fun! Yet it was not everything I devoted my time to. I also helped a little bit at Dublin 2019 and Glasgow in 2024 tables. As usual, manning a table was a good occasion to chat with other fans either taking care of nearby tables or coming to ask about the con. 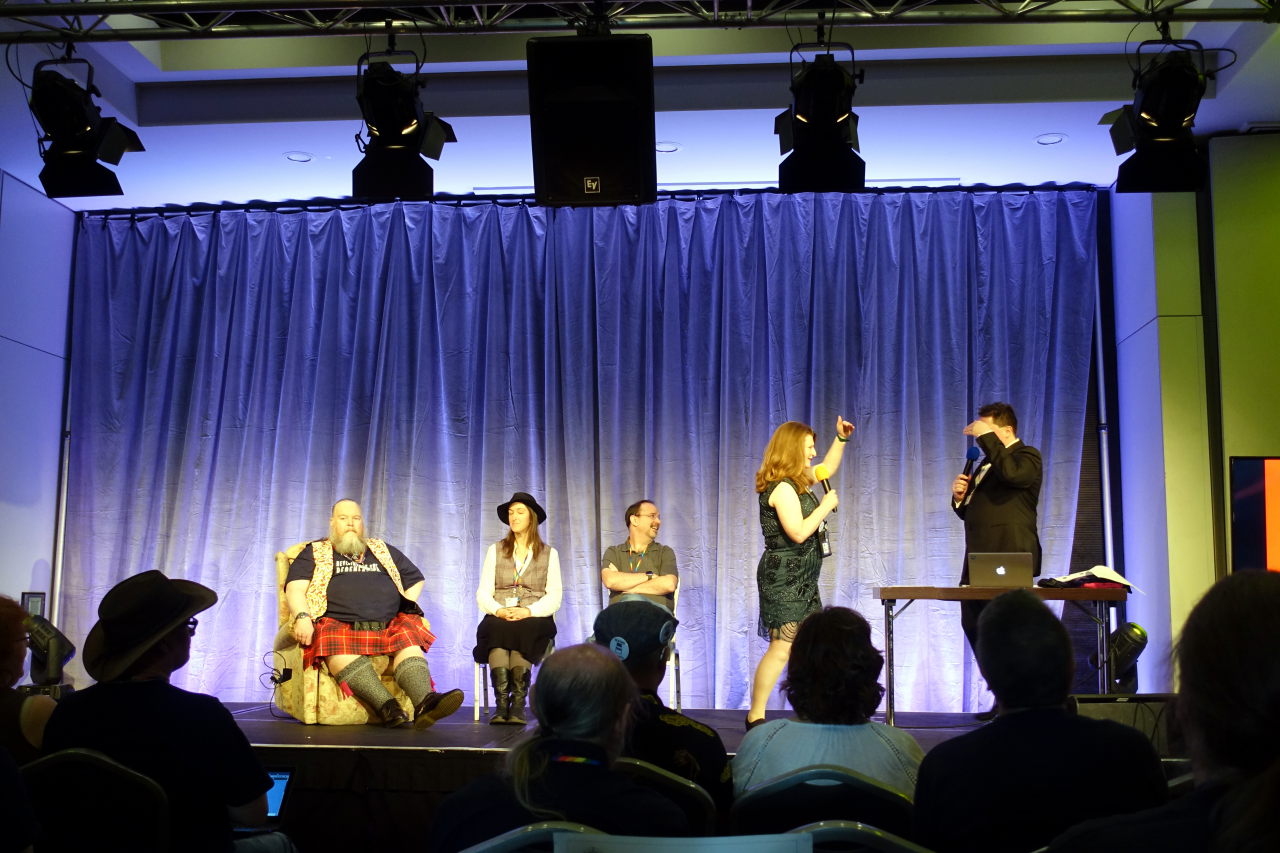 I also wanted to help the convention so I agreed to do a little bit of gophering and do a little for Ops. Here I didn’t have enough time, so apart from the introduction talk on how to behave and react at the con I managed to cover only three hours of duty. It was quite ok and I am more inclined to try more work for Ops in the future.

I have been to many conventions but I think that Ytterbium was the first one where I had the chance to participate in the wedding ceremony. Kylie and Robin decided to hold their ceremony at Eastercon and all members were invited. Ceremony was really lovely – it was not too long and not too short. The mistress of the ceremony took care to be serious where necessary and more casual when it was the proper time. After the ceremony Kylie and Robin shared their wedding cake with us (it was great, I assure you!). 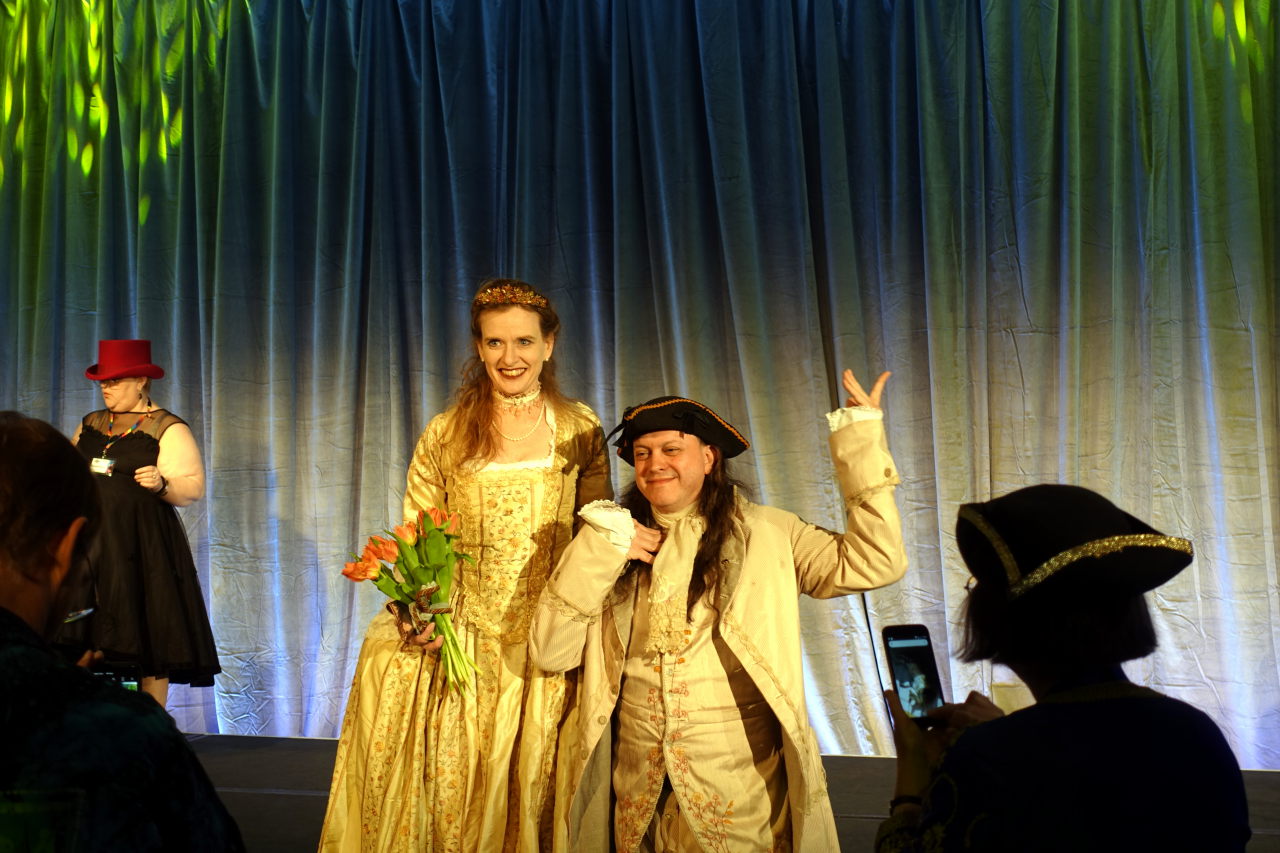 Kylie and Robin posing for pictures before Their wedding ceremony.

During the ceremony also one more thing happened – Ayaka’s and Woj’s engagement was announced publicly. I think it is really great to see people sharing their love with the extended family that fandom really is. 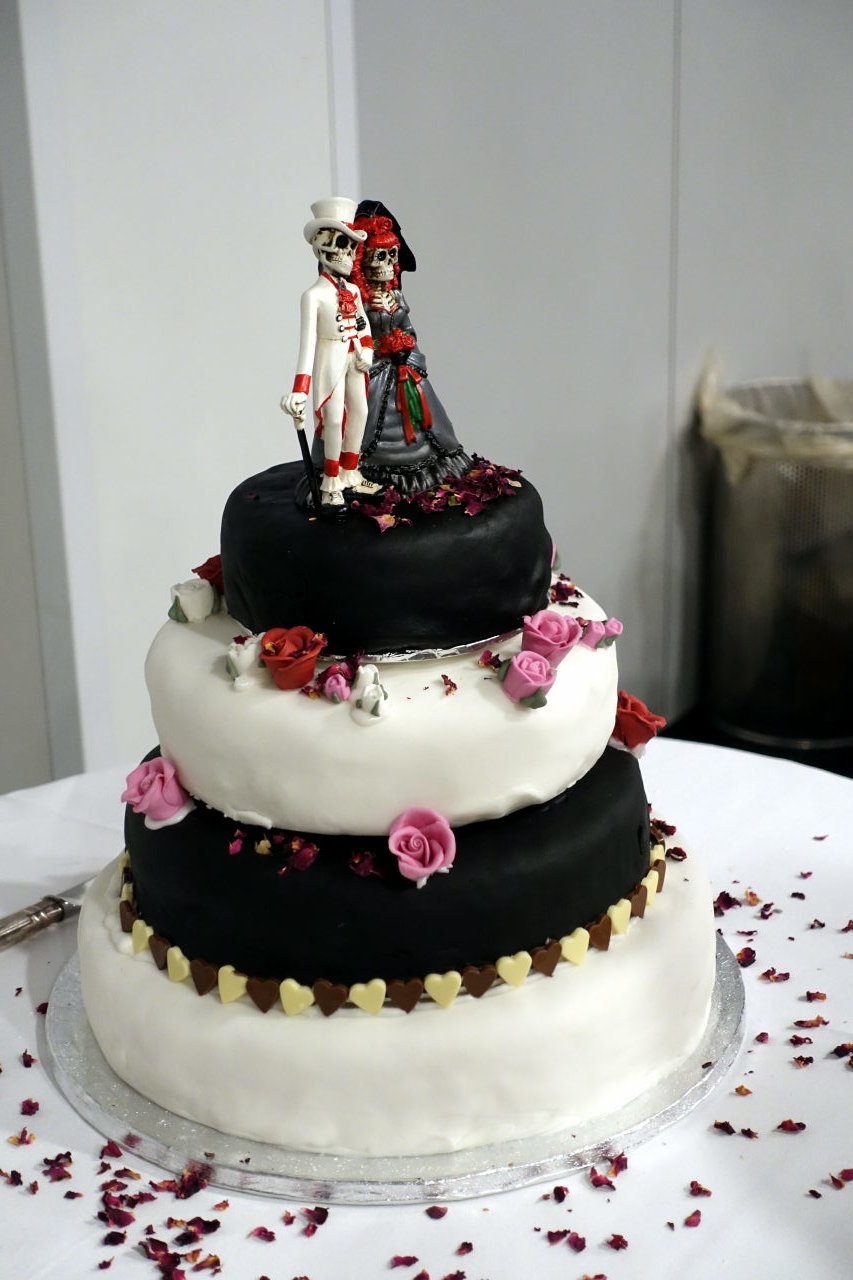 The con was a crazy four days for me and now I am back home and I already miss it. I regret missing some points (especially the Playing Rapunzel concert) but I am really happy for what I had the time to do. What saddens me is the fact that I won’t manage to come to the next Eastercon – Concentric in Birmingham.

My next post will be published in two weeks and will treat about Pyrkon – the biggest Polish convention.