During the last few years Pyrkon has become an important convention for me (and for thousands other SFF fans in Poland). With the convention growing bigger and bigger my approach towards it have shifted, but it was – and still is – a convention I keepdoing my best to attend every year. Still, when writing about it now, I have to mention one issue. Pyrkon is too big for me to be able to grasp everything that goes on during this convention. My report below is not really a Pyrkon 2019 report. It is merely a report on a small part of the con.

When I arrived on Friday, I had the impression that Pyrkon shrinked somehow. There was a lot of people, but I had the feeling it was not as crowded as it used to be. It turned out that I was quite wrong. It seems that this year’s Pyrkon broke the last year’s record and it was visited by 52,120 people. Yes – you are reading it right – over 50,000 members in three days! The organizers also revealed another number – measured using the method used at fairs:  120,170 visitors (when someone had a badge for three days, their attendance was counted three times in this number). Using my mathematical skills and adding some assumptions, it seems to me that slightly over 34,000 members attended the full convention – WOW! 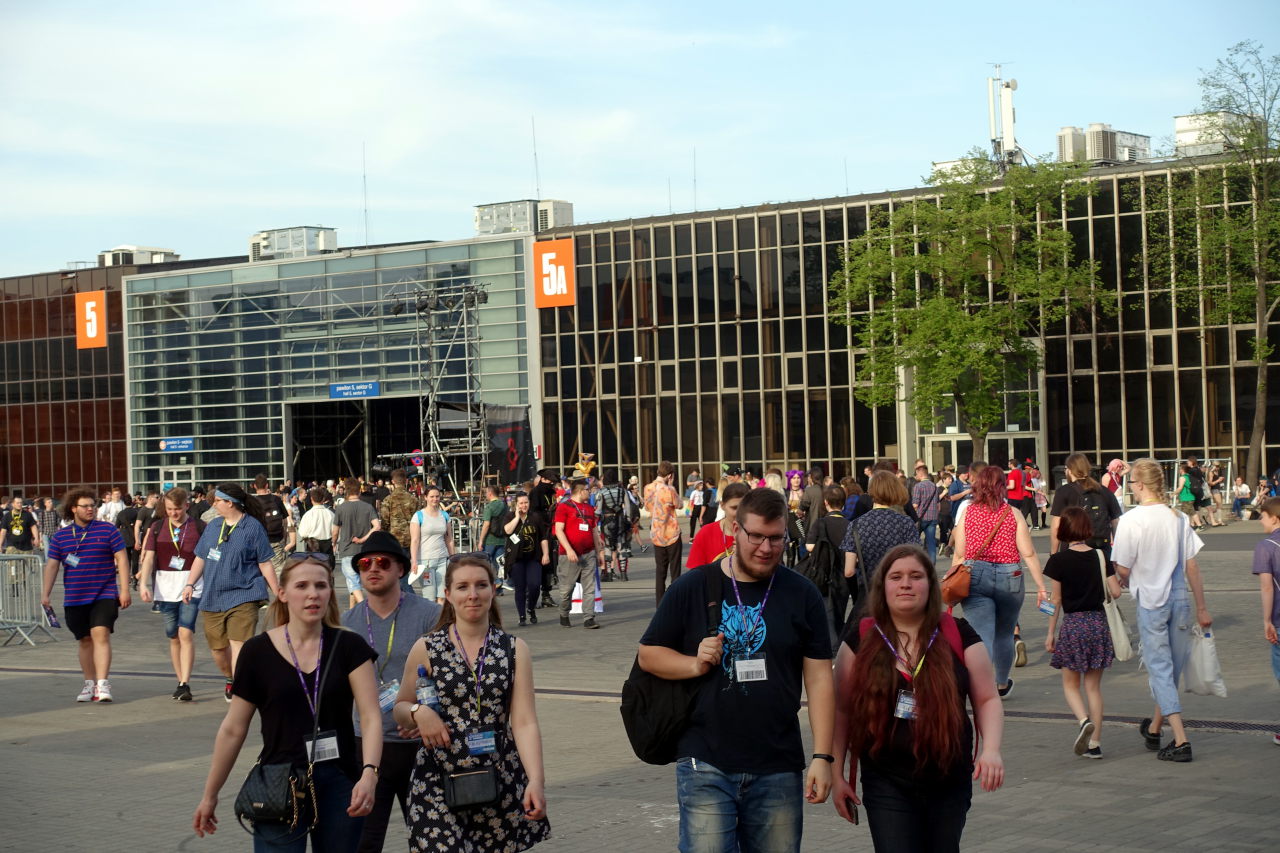 Space between some of the Pyrkon’s buildings.

During the last two or so years I almost stopped attending programme items at Pyrkon. When I had been sure I would fit into the room, I attended the item, but all the long queues were too discouraging. This year I was told to come to one item with my friend. I was sceptical, but queueing with someone is better than doing it alone, so I gave it a try. To my surprise we managed to get into the room and there were also some free chairs after everybody was seated. I tried again during the day and I managed to get into each of the items I tried. It seems more people were discouraged and it is again relatively easy to get into the items one wants – a good observation for next year. 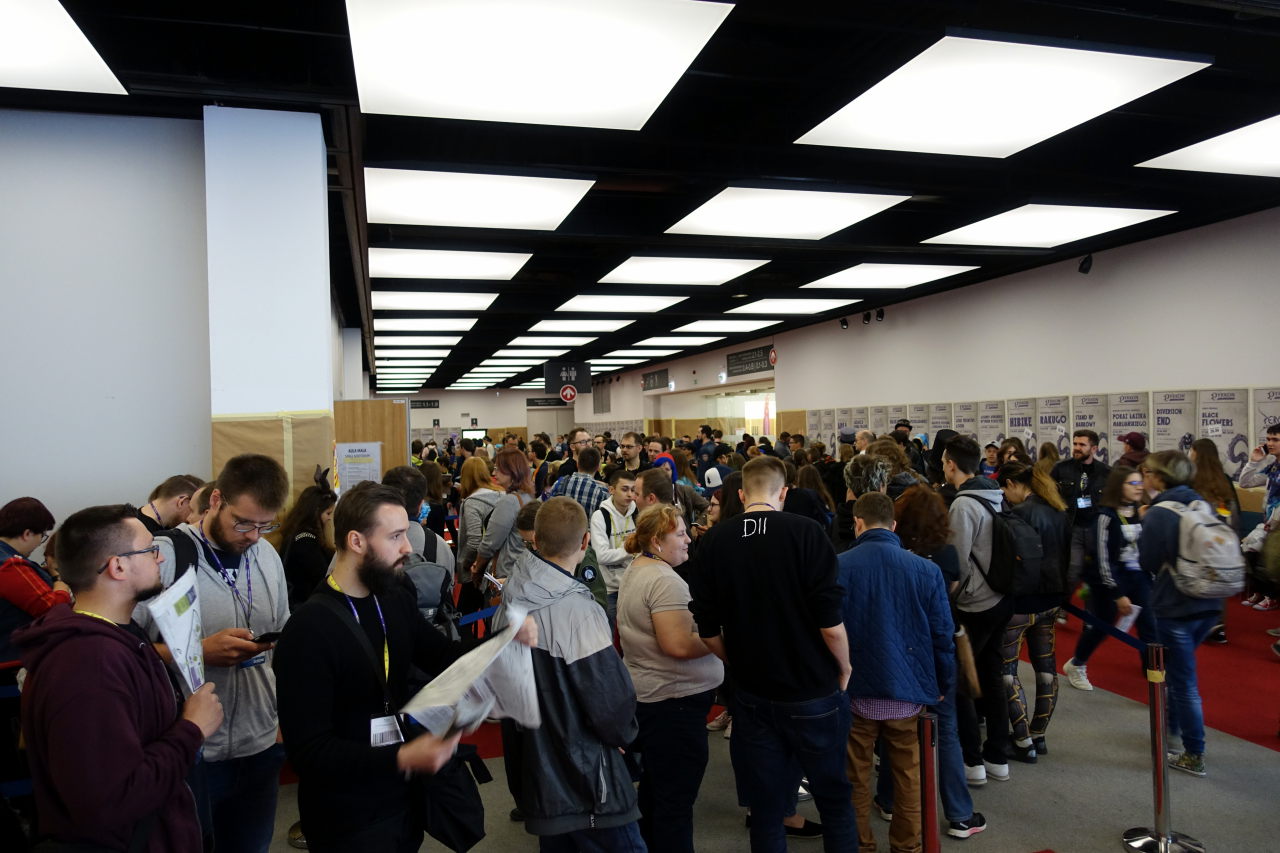 Queue to one of the programme rooms.

You can buy anything you want

Every year at Pyrkon there are literally hundreds of sales stalls (or at least it seems so). You can see almost anything there. Books, comics, games, t-shirts, figures, jewellery, hand made soaps, art, sweets, soda, merch… I don’t recall any geeky category of items that I was not able to spot at Pyrkon. The convention is big enough to attract not only dealers from Poland, but also ones from nearby countries – I have seen two stalls from Czech Republic and one more where the staff spoke English. 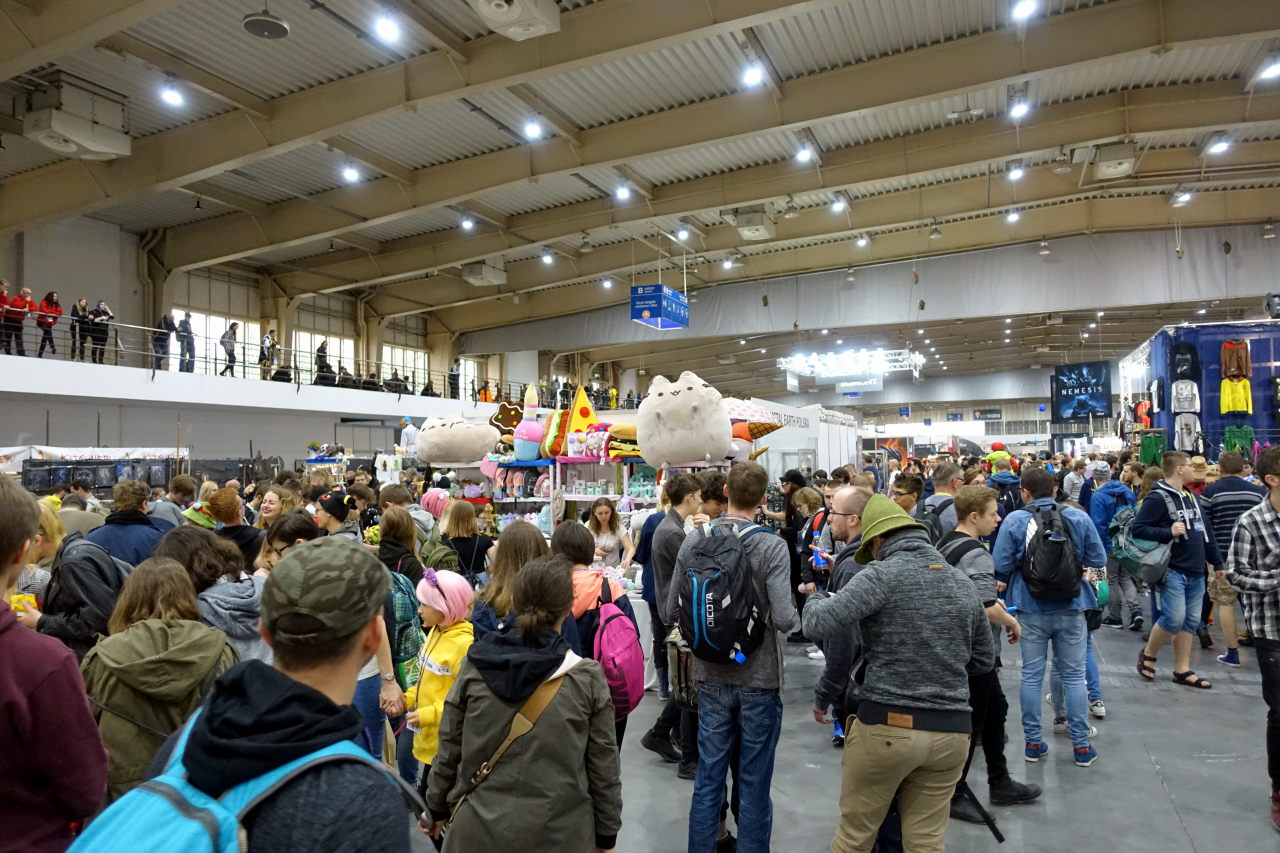 Inside the dealers hall.

It is way too easy to spend a lot of money in the dealers hall. I tend to avoid making too much shopping at Pyrkon but usually I find something tempting enough for me to buy it. It was the case this year with a POP vinyl figure from the Fairy Tail anime…

Most fan run conventions tend to provide visitors with a badge and programme book. It was no different with Pyrkon. On top of that, I received a lanyard (also quite common). What surprised me, however, was the programme book. I have seen dozens of such books, but this one was something new to me. It was printed as a newspaper – both in terms of size and the paper used. It means it is too big for the box where I keep the programme books, but looks quite cool. 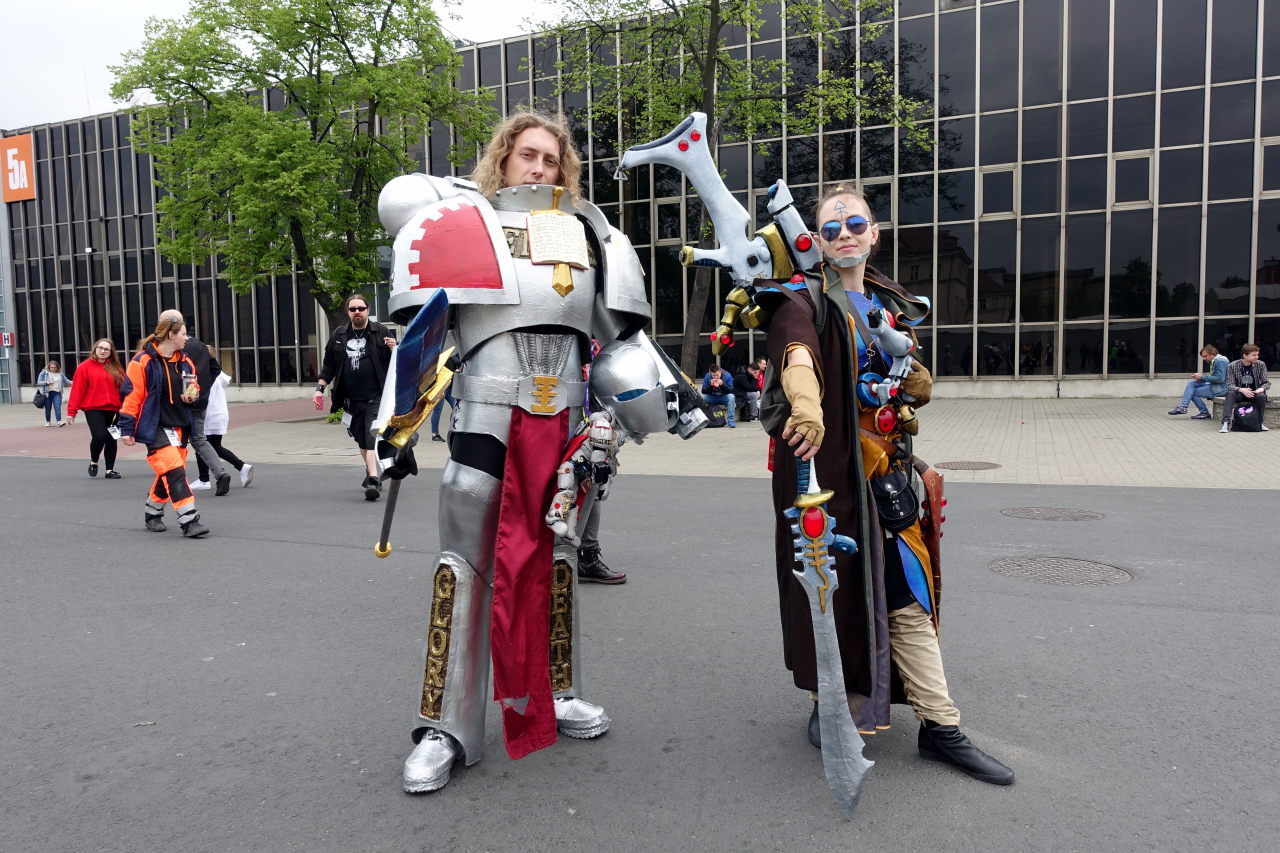 There were many cosplayers at Pyrkon.

As I was a programme participant I was asked to visit the convention office to sign the volunteer agreement and receive the last part of the welcome packet. I had to choose between tickets to some events during Pyrkon (including Percival Schuttenbach concert) and a die. As I love dice, I chose it immediately and I was surprised. In the recent years, Pyrkon used to give away some special dice to its members, but those were standard ones. The one I got this year was bigger – jumbo size.

Manning the table and doing other stuff at Pyrkon 2019

Similarly to last year I manned a table of Śląski Klub Fantastyki (Silesian SFF Club). Apart from the club, we were also promoting Dublin 2019 an Irish Worldcon. I spent just a few hours at the table and therefore I was able to enjoy the convention more than last year. 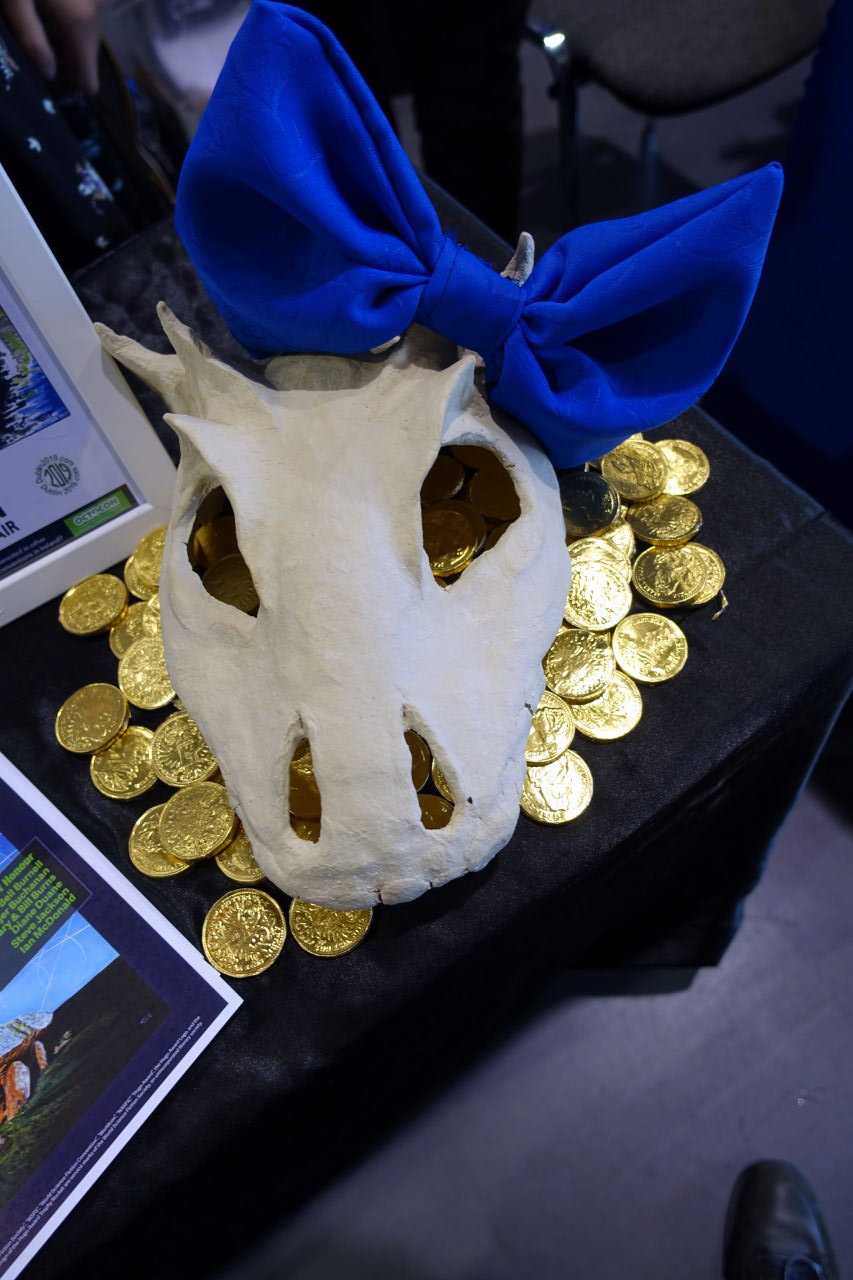 There were some exhibitions at Pyrkon 2019. I am not sure whether I have seen all of them, but I recall seeing some awesome things. There was an exhibition (and I think also a competition) of painted miniature figures. Some of them were astounding. There were some paintings as well as an exhibition of paper made Pokemons. I recall also seeing a big table with miniature space ships. I am sure that right now I don’t recall everything I have seen.

There was also a huge hall full of attractions for video game players. I had been there for just a few minutes, but I saw that it was full of both people and stalls. Of course, there was also a huge room for board game players and another one for RPG players – again, I just got the chance to see how it looked like but, I didn’t play. 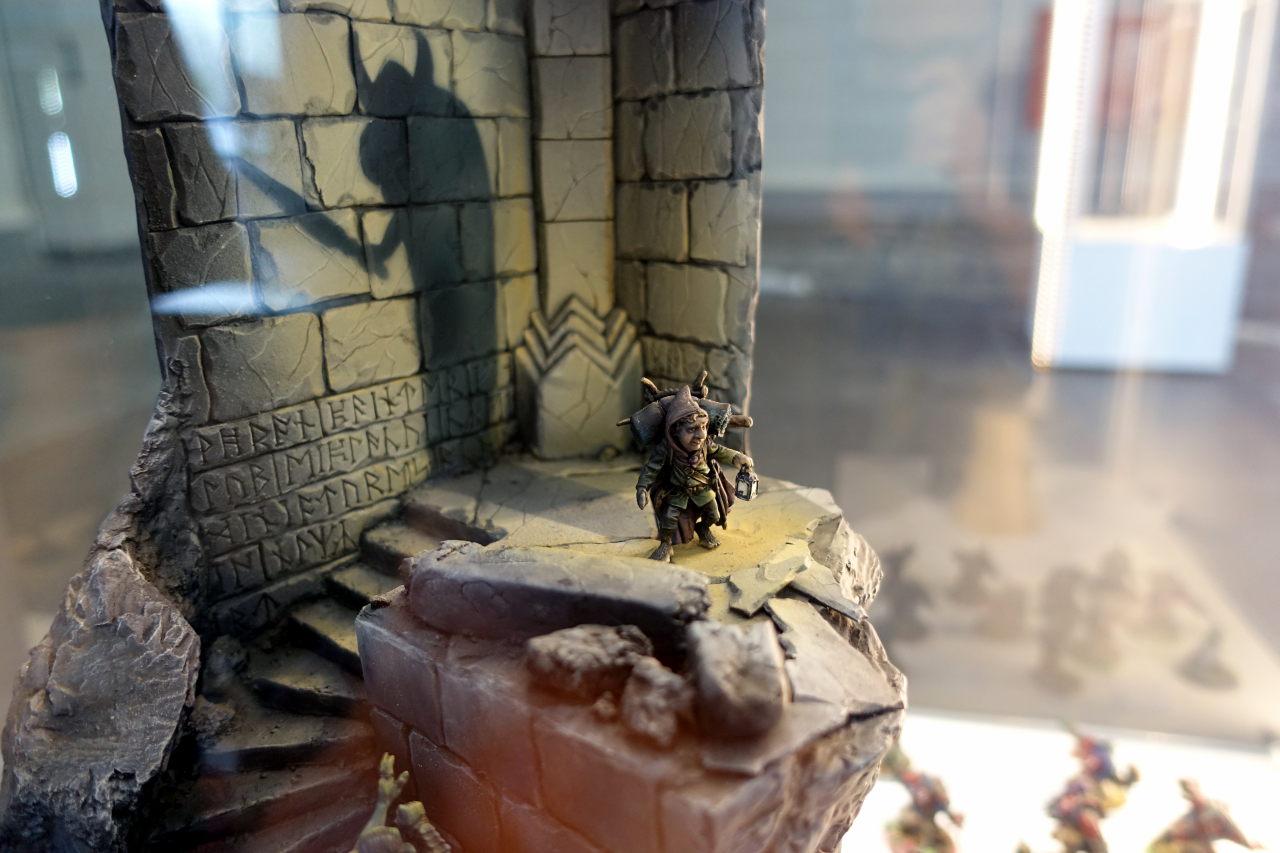 I really love this diorama.

So how can I even try to give a mark to Pyrkon? I haven’t seen even 10% of the con, so am I really able to tell whether it was good or bad? I don’t think so. What I have is just some impressions on how well I was feeling, but it is not even close to being an objective estimation of the con quality. On Friday, I was overwhelmed by the con and felt it was not a place for me anymore. On Saturday, I enjoyed it and was really happy to be there. Finally on Sunday I regretted I had to leave it already. Now I know I must do my best again to visit Pyrkon 2020.

My next post will be published in the middle oj June.