Wirtualkon was a very short manga and anime convention. It was an experiment for organizers (and I also treated it as such). The whole event was much too short for me to write a longer report but I have a few thoughts to share. Also, I decided to concentrate more on the platform that had been used to make this con.

Why we can call it an experiment?

I believe that most conventions that went online decided to use existing platforms. Different options were used, but certainly Discord and Zoom were quite popular. The Animatsuri association (the organizers of Wirtualkon) decided otherwise. One of the members of the association decided to develop a tool dedicated to online conventions and using it was certainly an experiment. I will write more about the tool a bit later.

Logo of the con as presented on the facebook event.

Wirtualkon was also a kind of experiment for me. Although I started with manga and anime cons back in 2002, in the last few years I’d visited such events very rarely. In fact, the only event I recall attending was Magnificon two years ago. Although I still like manga and anime, I somehow cannot find my place on M&A events any more. So attending Wirtualkon was a kind of experiment for me.

The tool that was used for Wirtualkon is called NERVGear. In general, I must say that it was quite neat. It had some flaws but all in all it worked pretty well. The main idea (as I understood from the creator’s explanation) was for the tool to imitate the feeling of being at a convention. First of all, there was a map that you could use to move from room to room. The tool was also supposed to be easily accessible without the need to registering or downloading an app. NERVGear functioned as a web page where one could create an account but it was not required to attend the con.

Upon entering the convention, I saw its website as presented below. The map was interactive and after clicking on any of the rooms certain frames were reloaded and brought you to the desired room. Below the Patronite link/widget, there was general chat where one could post and read. Even without registering you were able to type in your name or pseudonym. What you cannot see on the screenshot is the programme table (containing links to proper rooms). 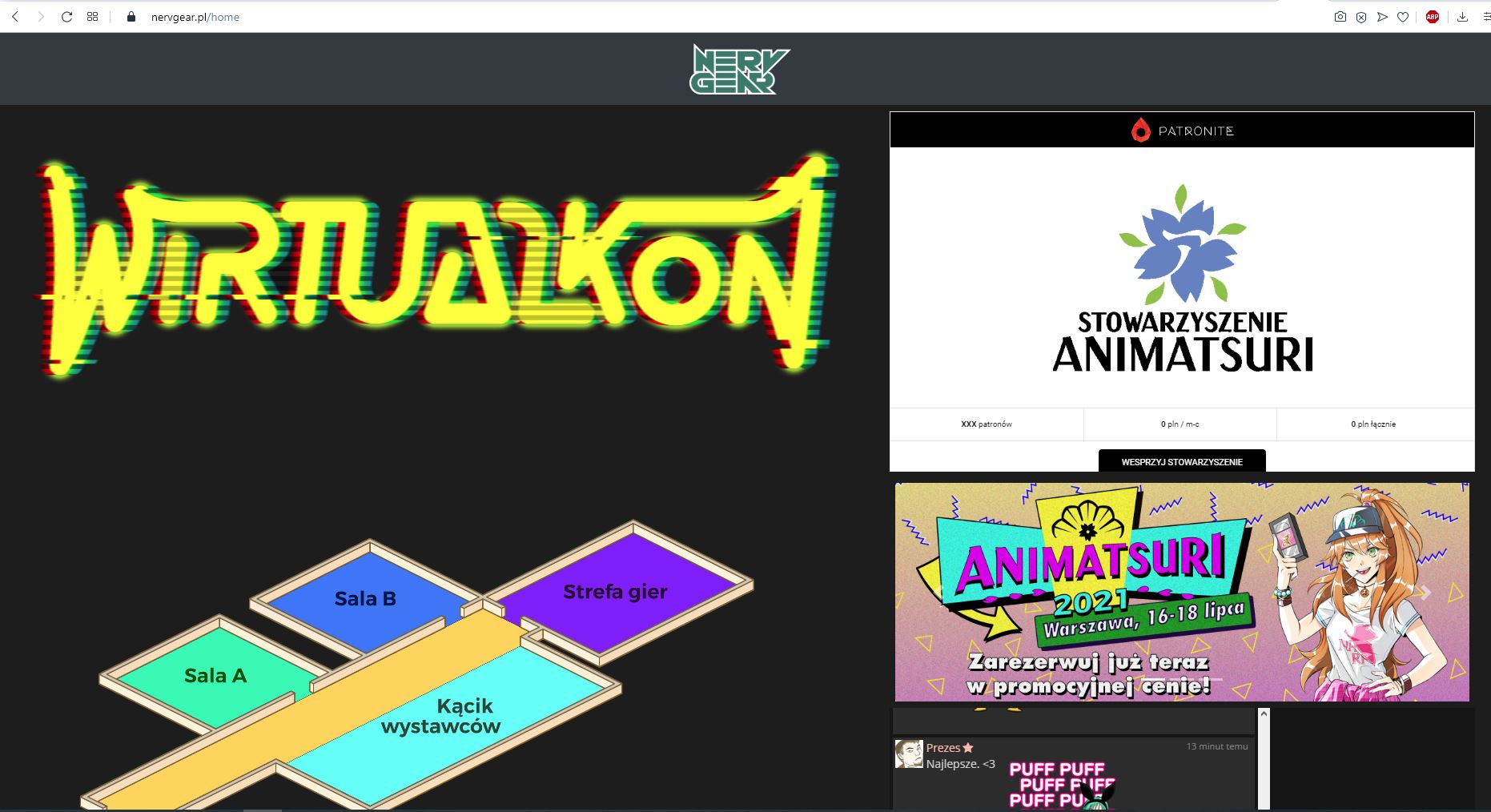 This is what I saw upon ntering the convention venue.

The programme itself was loaded in the frame. Instead of developing a new streaming platform, NERVGear is simply connecting to a YouTube or Twitch stream of the presenter. There were some technical difficulties here – sometimes the stream was doubled and therefore there was an echo but all in all it was working quite well. Upon entering the programme room there was a separate chat available for discussing the current item.

I quite liked the dealers’ hall. After clicking it on the map (“Kącik wystawców”), you were transported to a page with names of all the dealers and their sample pictures. If you were interested in buying something, you could click on the link to the e-shop of a given dealer. I am not sure how efficient it was for selling and advertising products but it looked nicely. 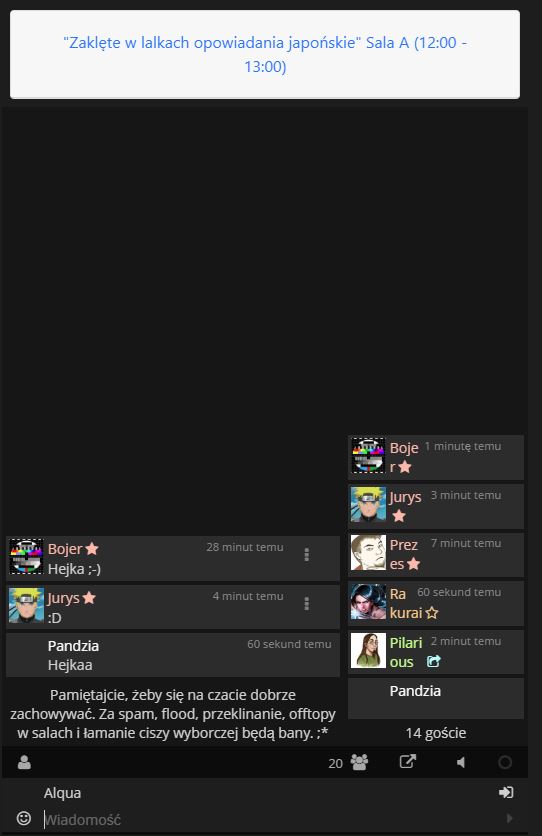 Main chat where anyone could talk.

In the particular case of this convention, certain aspects were missing. First of all, it was much too short. It started on 12:00 and ended at 18:00. Six hours of convention time is not enough for me. Moreover, the programme was only partially to my taste so I had two hours where nothing interesting was happening. I also missed having the convention badge. It is not a crucial aspect of the convention but it always gives me a feeling of being a member (even if everything happens online).

As for the tool, it worked well, but I found Discord much better for socializing. A possibility to have multiple separated discussions on different topics is really good. Also the fact that as a user I have much better control on the chat window size is important. Finally, Discord allows to have voice or voice & video chat and NERVGear doesn’t include such a feature. 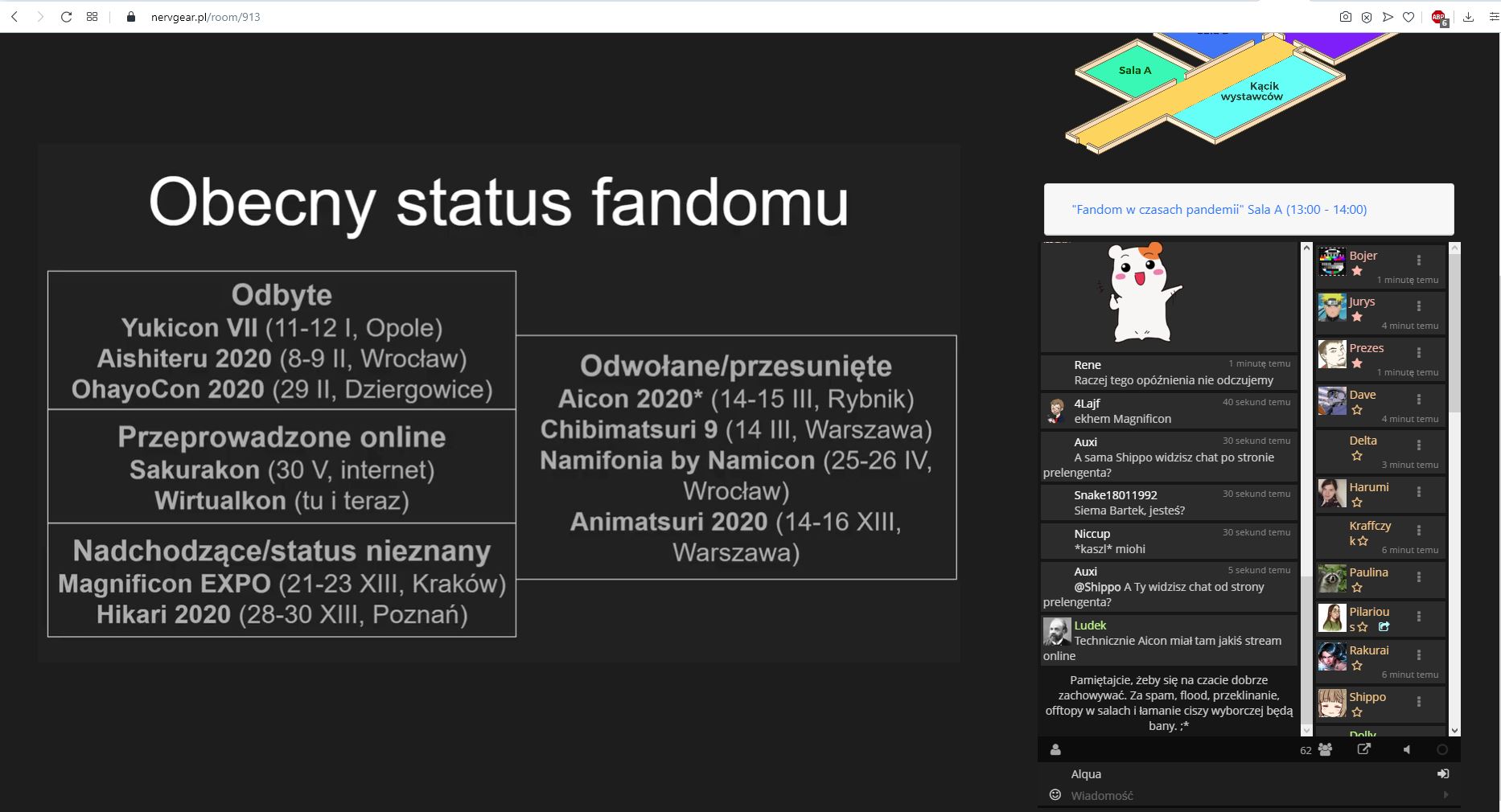 Slide form the presentation about current state of Manga&Anime fandom in Poland. To the right you can see the chat that was used during presentations.

Where it comes to participation in programme items, it worked pretty well on the listening part but interactions with the presenters were limited just to chat with no possibility to ask voice questions. It is not that bad but I prefer to have the option to ask/listen other people’s questions. Still the chat worked really well for discussions with other participants.

As stated before, only part of the programme was interesting to me. I wanted to listen to two items – the first one was about Japanese dolls and legends related to them. The second was a talk about the situation of Polish M&A fandom during pandemic. After listening to those items, I can say that they were really interesting.

As for the evening, there was nothing I really wanted to see but I decided to give the typography workshops a try. In fact, instead of workshops per se it was rather a talk with a presentation. The item covered only the basics but as this is terra incognita to me I found it quite interesting. I am 99% sure I will not create my own font but I had a great time throughout this 2-hour workshop.

It is hard for me to give a clear mark to Wirtualkon. There were very good aspects to it but the event was much too short. I was positively surprised by the tool as I hadn’t expected it to work so well (and I will gladly see if and what changes will be introduced in the future). I have mixed feelings about the programme but as I usually not attend M&A events any more, it is hard for me to say whether it is comparable with other cons. Time I spent at Wirtualkon was fun and I do not regret it alas I have the feeling that something was missing.