I don’t remember when I heard about Boskone for the first time but since then I wanted to visit it. It was not an easy thing because of the distance between Krakow and Boston. This year’s situation was different as the convention had to move online. I am happy that it allowed me to participate. At the same time, I regret that it was impossible to hold it in its original format, as an in-person convention.

Last year when I was sure I’d manage to join the con I volunteered to be on programme. Very soon after, I received a reply informing me that they could share the programme survey with me but cannot guarantee a place in the programme as it would be limited. All in all, I was invited to take part in two panels. On top of that, I was one of the auctioneers at the Fan Funds auction. The approach to programme participants was awesome. I received all the information on time and the manner in which I was contacted was nice. On top of that, there were some Zoom training sessions before the convention to let us know how to use the tool.

The beutiful picture I saw after filling in the Program Survey.

When we talk about programme I must say a few words about it. In general, there were many interesting panels and talks. I enjoyed the two topics for the panels I took part in (Building online communities and Post-Pandemic SFF Conventions). Apart from them, I visited a few other items – not as many as I would like but the six hours’ time difference was a limitation. The ones I liked the most were Cyborgs Are People Too and Harvesting Space for a Greener Earth. The first was an interesting panel while the second was a talk. They were both educational and made as a good food for thought.

What I regret are the breaks between the items. In most cases, there were 30 minutes breaks after each panel/talk. In a way, it is great as it allows one to either talk with people or prepare something to eat. Yet it also meant that there were fewer items to see for the European members during the day. I understand the decision to schedule convention like that – I just regret it came with a price.

Partying and Getting Social

Just after the Boskone Opening Ceremony we had a Glasgow in 2024 party in the consuite. It went pretty nice with interesting conversations ongoing all the time. I planned to stay only for an hour but as I hosted the collaborative jigsaw puzzle, I had to wait until we finished. It took us almost two hours to complete the puzzle I chose. They say that sleep is for the weak and I would repeat this party with no regrets ;). 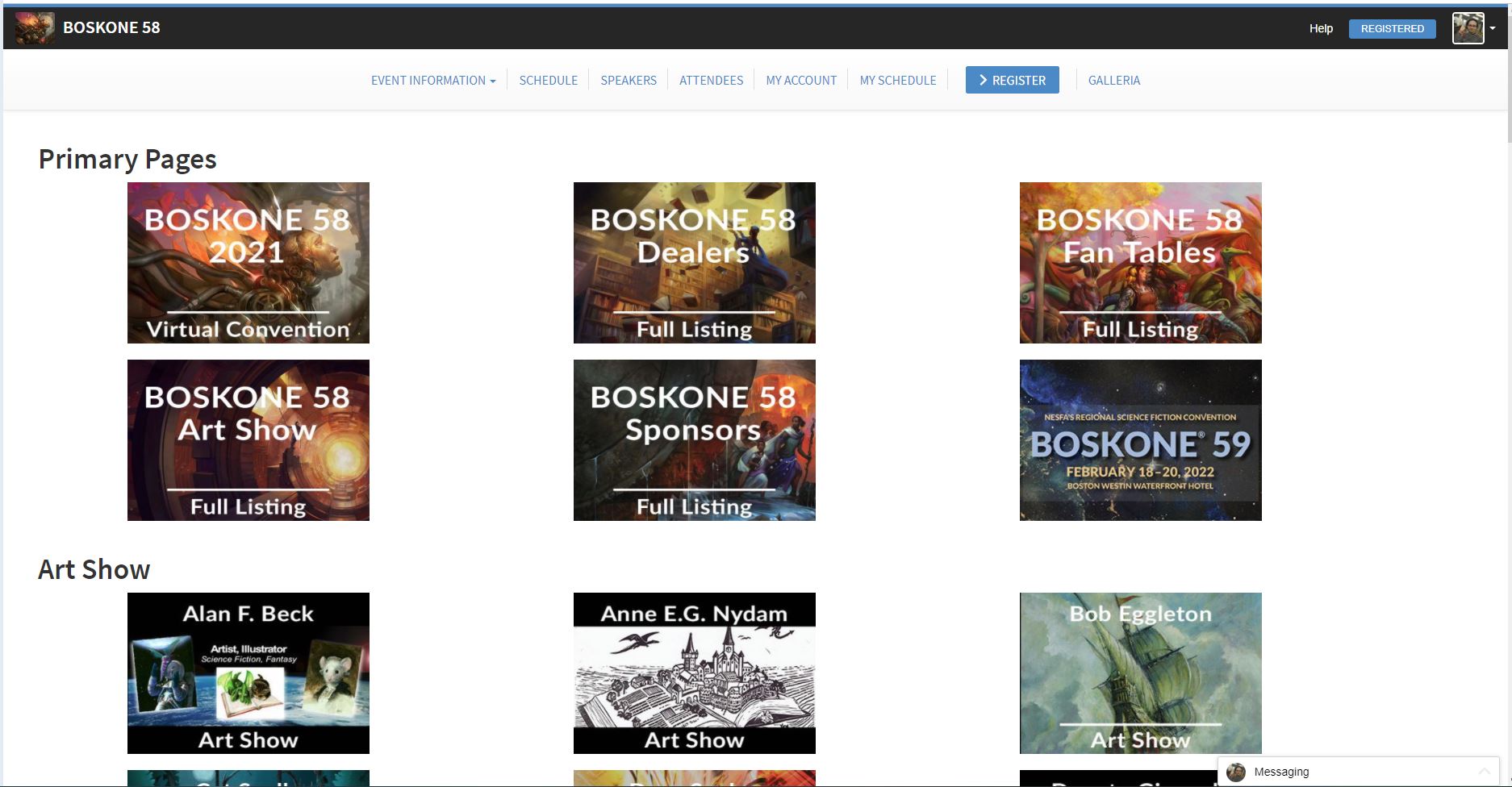 It is not part of the con socialising but here you can see how members were able to access ArtShow and other parts of the con like fantables, dealers etc.

The Dead Dog Party was a different story. It was a lot of fun too but I had to remind myself that the next day I needed to go to work. So despite my willingness to stay I had to go to sleep early. The next day when I started my workday I received the information that the party was still continuing. I was and still am impressed by the stamina of the fans who were there.

I visited Consuite a few times during the con. It gave me some opportunities to talk to people or even to listen to them talking. On top of that, I also had the opportunity to enjoy some chatting at the Glasgow in 2024 fantable.

The New Approach to the Virtual Venue

Unlike many virtual cons Boskone 58 decided to limit the number of platforms. All programming was on Zoom and everything else was hosted on Grenadine. I was quite impressed by how neat the chat and the fantable worked in Grenadine. I believe Boskone was the first convention to use this functionality. I experienced some delays in page loading (probably because of my location) but all in all, it worked well. Such setup required members only to log into Grenadine. All the links to Zoom meetings and everything else was there. It is definitely a nice solution. I still prefer Discord but I do believe that with some tweaks Grenadine can become a great platform for conrunning that could replace it. 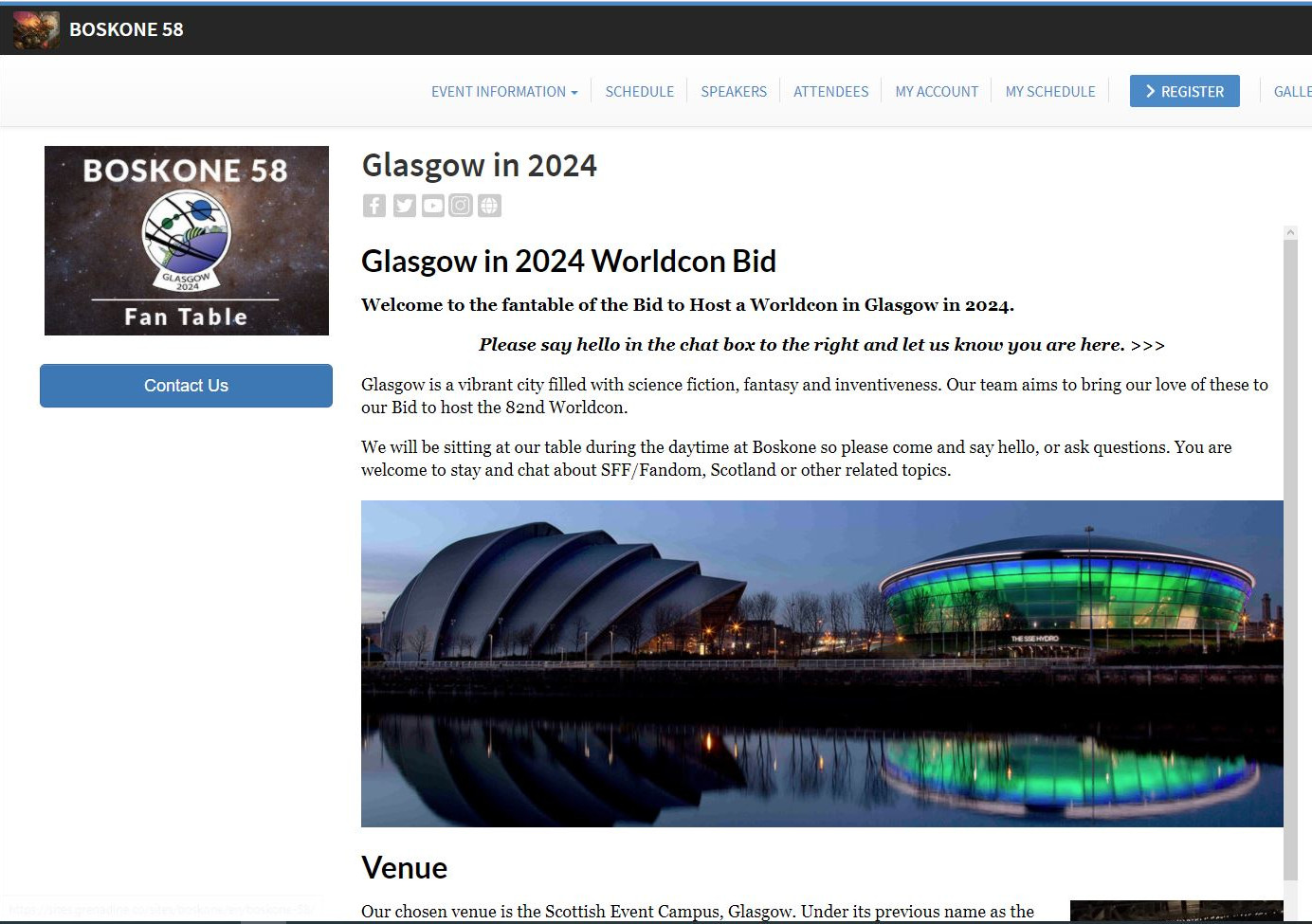 Glasgow in 2024 fantable at Boskone. The chat was placed to the right from what you see. I cropped it here in order not to show participants’ names.

Fantables on Grenadine already work better than on Discord. Chat functioned only as an addition. It may require some extra work to make it better. Yet the possibility to see some information about the initiative was extremely useful. Definitely it looks much more professional than a simple text channel on Discord. The same setup worked pretty well for the Art Show. I am not sure whether it boosted the sales but from the member perspective, it worked well.

I was quite happy that there was a Souvenir Book available. The stunning cover art was made by the Artist Guest – Julie Dillon. Inside the book, more of her great artwork was presented. So far I hadn’t have the time to read the Souvenir Book but I saved it for future reading. 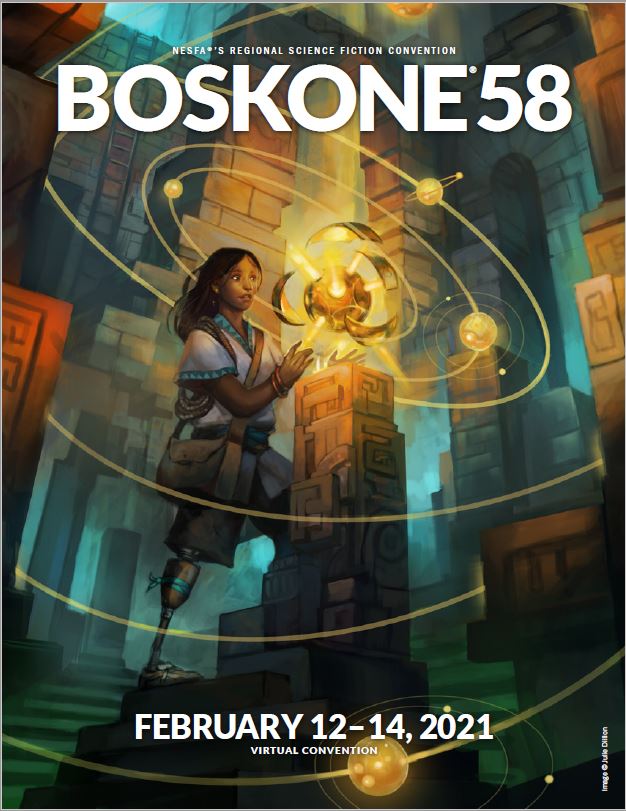 The Souvenir book with a stunning artwork by Julie Dillon.

As stated above, for a few years I’ve been wanting to visit Boskone. Now, after attending it, I can say that I still want to visit it again. I hope that in the years to come I will be able to make a February trip to Boston.

My next post will treat about Contribution and will be published on 10th of March.