You may remember that there was an earthquake in Croatia in December 2020. If haven’t heard of it, the Croatians fans do. And they wanted to help the victims of this natural disaster. They decided to raise some money using their fannish ways – by organizing a convention. It was called Contribution.

At first, I expected that there will be a convention fee to help the victims. Instead, Contribution was free but donating to the cause was encouraged. I am not sure how much money they raised but I hope that it was enough to help some people. In case you missed the con but you would still like to help, here is the link to the charity foundation they suggested to donate to.

Apart from the donations during the convention, two RPG bundles were organized a few weeks before the con. One of them was available on DriveThru RPG and the other on the Itch.io platform (It was the first time I learned about the latter). I am not sure what the final numbers were. Yet, at the end of January, a sum of over 5000 USD was collected with the help of these bundles. 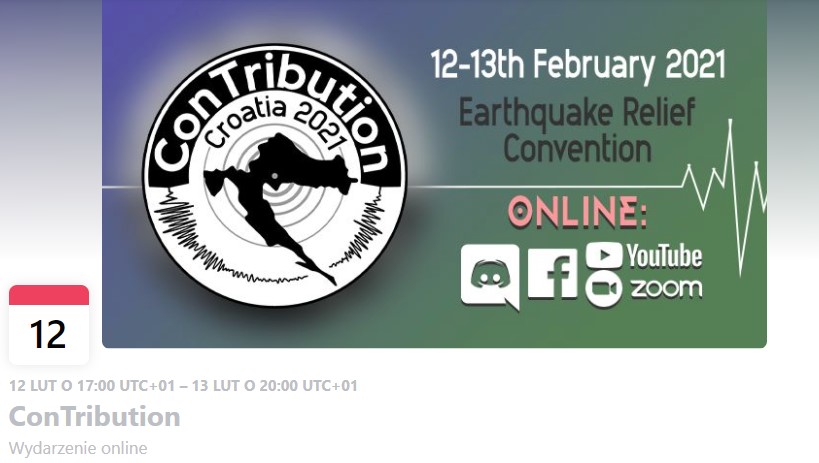 Programming and Interacting with People

Contribution had programme items in both English and Croatian. Because of my language skills I was able to participate only in those that were held in English. As the same weekend Boskone was taking place I didn’t manage to attend too many items. Still I am happy I had the chance to listen to interview with GoHs – Adrian Tchaikovsky and Juliet E McKenna. Later I listened to the presentation of Croatian RPG in production – Rise of the Sovereignless. On the second day I managed to take part only in one item. It was my presentation called Travelling to conventions abroad – yea or nay? I think it went quite well. Maybe I’ll write an article about it for my fanzine. Unfortunately another item I wanted to listen to was cancelled.

The social part of the con took place on Discord. I was discussing with people at two channels there. The first was Glasgow in 2024 fantable. The second one had a beautiful name #blabberorium-1. As you may expect it was devoted to random talks. It was nice to talk to Croatian fans. I was even asked an interesting question about Polish publishing market. It seems that one Croatian writer had a book published in Poland in the 80s. The book was in Croatian and the fan asking was not able to find any traces of it. I also wasn’t able to do so. We are wondering whether it was just author boasting about it 30 years ago or it was cancelled and no one cared to let the author know…

The Third Croatian Convention in 12 Months

When the pandemic started I did not expect that I would attend three conventions in Croatia over a twelve months’ period. Yet here I am – after SferaKORon and Futuricon Eurocon, I attended Contribution. Although I didn’t have a lot of time to enjoy the con I am quite satisfied with how it went. I would love to be able to attend Croatian conventions in person again. Yet I don’t expect it to happen this year but maybe in the future… Who knows?

My next post will treat about Konline 2021 and will be published within two weeks.