Kontakt (Eurocon 2012) in Zagreb was my first convention abroad so I was really looking forward to Futuricon in Rijeka (Eurocon 2020). I had plans – I checked what are the options to travel, what can I see there and nearby. And then, the March came and I had to stop planning. When it was announced that Futuricon will be held online, I was able to start planning again. And, of course, I planned to attend it.

I quite enjoyed how the virtual venues were organized. The whole programme (apart from ESFS Business Meetings) took place in one of the three rooms. They were streamed to the dedicated website available after logging in. I believe participants used Zoom meetings and the events were streamed using OBS. Below the programme window, there was a small chat box. It was not perfect but whoever wanted to discuss more was able to do so in the dedicated Discord server. This server was used for programme discussions, socializing, and ESFS meetings. There were some technical glitches with the streaming but in general it worked pretty fine. Of course the chat option is not as good as the possibility to ask questions directly but it worked well enough. 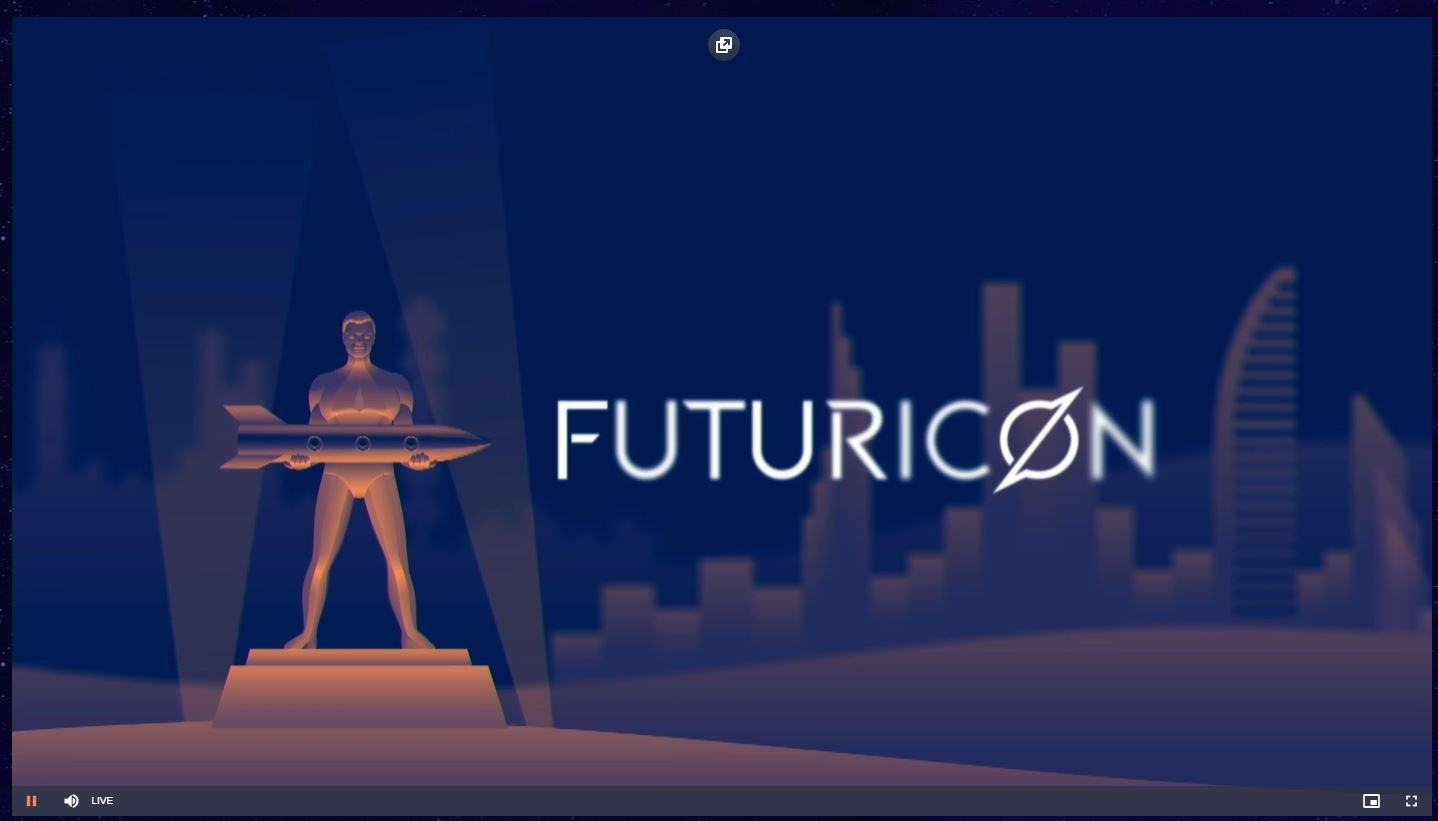 The streaming worked pretty well. here is the graphic that was showing before Opening Ceremony at Futuricon.

Apart from the virtual venue, there was also a physical venue where the organizers and some of the programme participants (and I believe also attendees) were. Certain programme items were in-person panels recorded there on the stage and streamed worldwide. It made me sad that I was not able to join but it was also like a breeze of fresh air coming and giving hope that we will be able to come back to the in-person conventions. I am sure I am not the only one missing them.

As usually at Eurocon, there were two European Science Fiction Society (ESFS) Business Meetings. I assume that these are not the most interesting items for most of the congoers but they are quite important to me. In general, it is the place where some decisions are made (e.g. where the Eurocon in two years will be held). It was also during the first meeting where Eurocon 20121 (Fiuggi, Italy) announced that they have the possibility to move onward (the current date is set to March). No decision was made so far but I believe it would be good to move it to autumn next year when, I hope, we will all be able to attend it.

The online ballot to vote for ESFS Awards.

This year, I finally managed to make the Polish nominations to ESFS Awards. I had to record a short presentation about them and then hope that they would be selected to receive awards. We decided to nominate in four Hall of Fame Categories – Tomasz Maroński for Best Artist, Anna Kańtoch for Best Writer, Wydawnictwo Mag for Best Publisher and Esensja for Best Magazine. On top of that, the Russian delegates nominated Paweł Laudański for Best Translator which made me really happy. All in all, Esensja won the Award. One of the things I really like about the awards is that each year the statuette looks differently and I am happy that after quite a few years one of them will come to Poland. Here you can check how it looked last year.

There were a few interesting items to watch during Futuricon. I managed to visit some of them and I missed some others… The ones I was especially happy to attend were Alison’s Virtual GUFF Trip talk treating about this year’s GUFF delegate’s (Alison Scott) virtual foray to Australia and New Zealand. I was also fascinated by the great talk by Cheryl Morgan – Worldbuilding with Sex and Gender. It was a short introduction to how sex and gender look in nature. It was so interesting that I decided to buy one of the recommended books to read more about the topic. 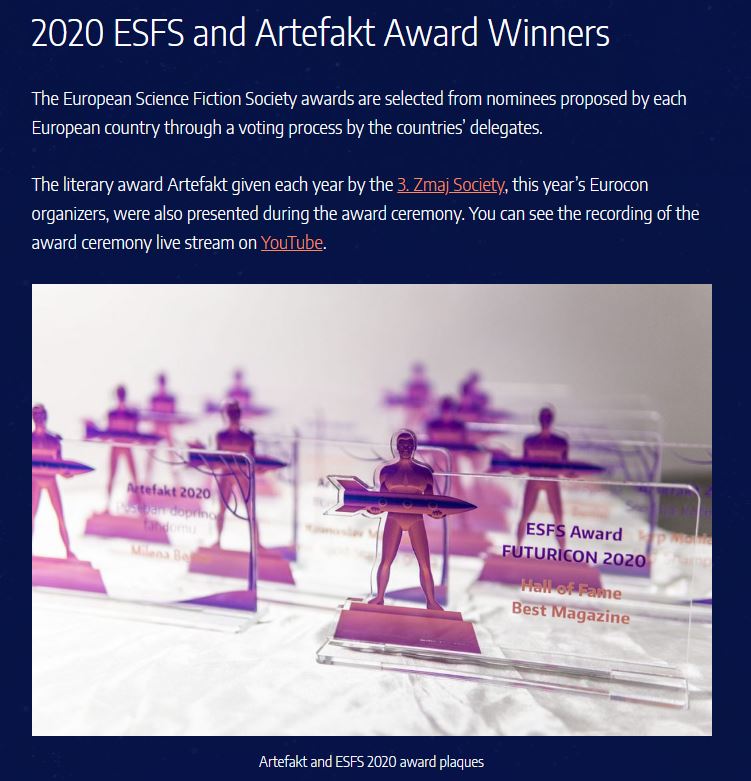 The ESFS Awards were presented during a ceremony. Here you can see a picture from Futuricon’s website.

I also listened to a few talks/presentations about conventions. The talk about Archipelacon 2 was really short, lasting only around 10 minutes. Others like Fan-Run Conventions in the American Midwest and SFera and SferaKon were longer. I was really happy to listen to Gillian Polack presenting the 2009 virtual convention – FlyCon. It was great to see how the con had been organized and how it succeeded in the times when internet was not as fast as it is now.

When it comes to socializing, Futuricon’s Discord was relatively quiet. Most chats took place around the programme items. As usually, I somehow regret it but one cannot have everything. Alison Scott organized an unofficial party on Saturday evening. I did not manage to stay long but I enjoyed it. It was not big but it was really pleasant and gave opportunities to have nice conversations.

The future is now

I do believe that what we saw this year shows that the we are living in the future. Beginning with March, I managed to attend fourteen online cons taking place in Poland, USA, New Zealand, and Croatia. I talked at a panel where one of the panellists was in US and the two others – in Poland. I listened to panels where panellists were in many different locations. We were able to not only listen to ourselves but also easily see each other. It is worth mentioning that the technology allows us to have virtual parties. This is all pretty amazing.

Futuricon was really nice and I am happy it went online instead of being cancelled. I really hope that it will be possible to safely attend the next Eurocons in Italy in 2021 and in Luxembourg in 2022. For now, I have good memories from Rijeka and I know I need to visit it in person :).

My next post will treat about Octocon and it will go online on 11th November.