I really like to travel to Ireland. I was even hoping to do so this year but the world had different plans for me. Still, thanks to Octocon going virtual, I was able to visit the green island in some way. It was my second time at The National Irish Science Fiction Convention and I enjoyed my time – again.

Octocon used such virtual venues as Twitch, Zoom and Discord. The last one was used for socializing. What I must mention is that it had a great set of personalized icons with little cute octopuses (basing on convention logo/mascot). I really like personalized emojis. Octocon had the pretty big set of those – 28 octopuses and many other icons.

I did not make the screenshot of dedicated emojis but their looked similar to the Octopus visible here.

In the beginning I had mixed feelings about Twitch. I knew it is a good and efficient way to stream the programme. It does not have such limits in terms of number of visitors as Zoom has. What I was concerned with is that I feel more “separated” from the speakers than in Zoom. Somehow, most of the programme items I wanted to visit during Octocon were streamed on Twitch and I started to like the platform. It still feels a little bit remote but it is not as bad as I was afraid. Additionally, the option to have conversation in chat (although I did not use it) seems to be a partial solution to my concerns (and it makes it almost the same as Zoom webinar solution). I think I’ll need to try the chat feature at the next con that will use it.

I am not really a party person. I like to go to sleep early so although I try to attend parties at cons (both online and in person) I rarely manage to spend a lot of time there. It was not different here. I really enjoyed the parties I visited. The party on Friday evening was hosted by PunctuationCon and on Saturday, Glasgow in 2024 made sure we will have a good place to chat and drink (water in my case). 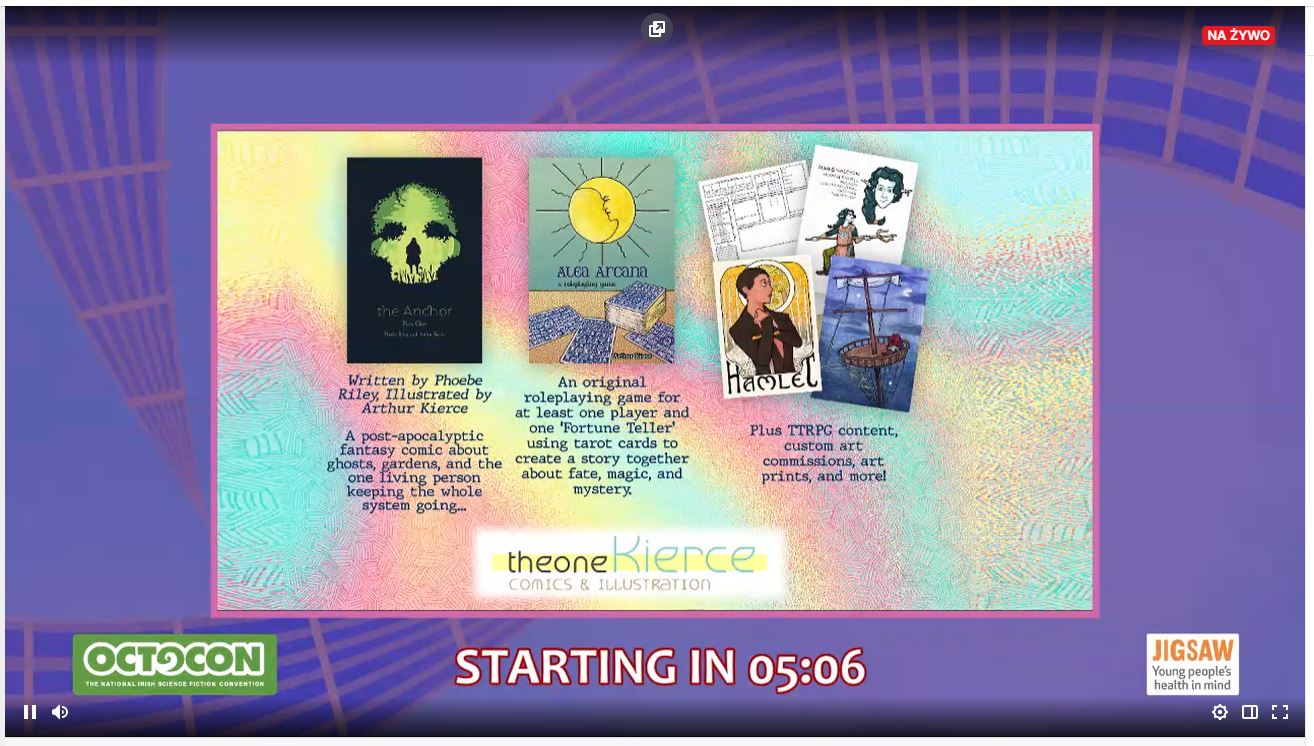 When we waitied for the panels to start there were some nice information and ads from delaers presented. I think it is a very good idea.

During the in-person cons, the parties are really cool but I think that to a certain extent they are even more important at the online cons. The social aspect online is way more difficult and having a party (or consuite – which I enjoyed during Necronomicon 2020) allows fans to have proper amount of chatting. Thanks to Zoom that finally enabled the possibility for attendees to move freely between breakout rooms partying on this platform is easier and does not require so much work from the hosts.

Octocon was celebrating its 30 years’ anniversary. It was a great occasion to celebrate. On the website, one can find a bunch of memories written by people who visited Octocon over the years. There is also a list of all previous Octocons with some details and a few photos. Lastly, the website hosts a gallery of pictures from the years that passed by. The number of pictures and memories is not very large but they are good to see and read. 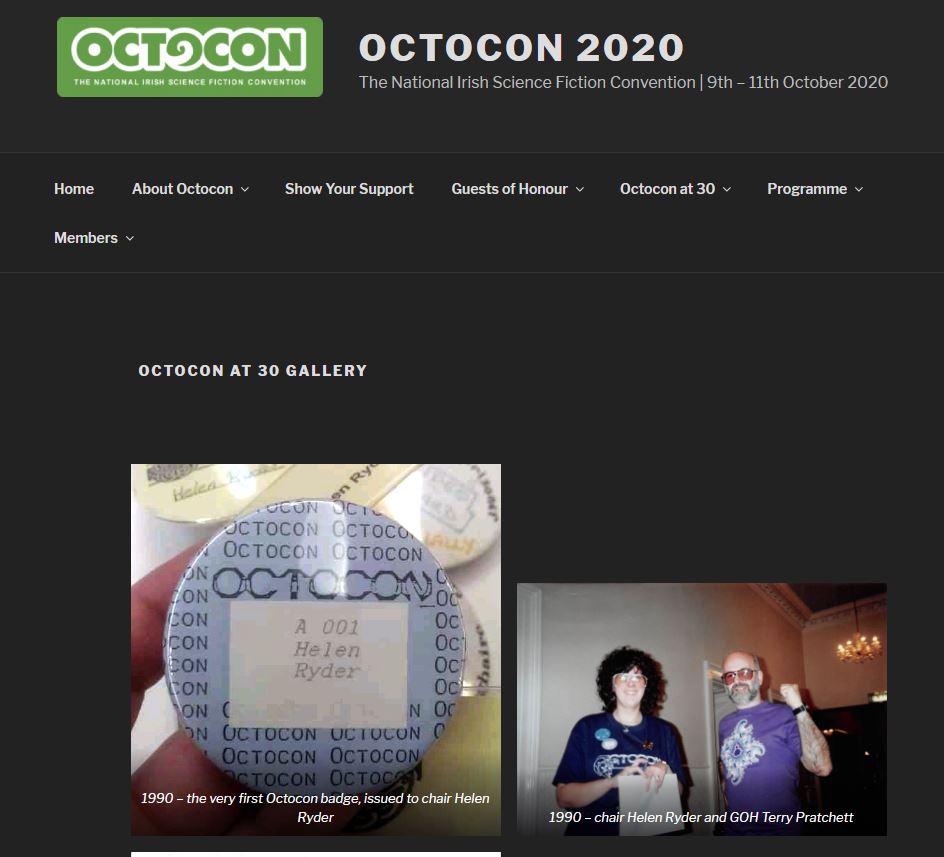 The screenshot of the Octocon at 30 gallery from Octocon’s website.

The Fan Guests of Honour this year were Helen and Philippa Ryder. They were both on the concom for the first Octocon in 1990 – in fact, Helen was chairing the con. I found it really nice that the first chair was asked to be a GOH 30 years later. It was also great to listen to both of them speaking both about their history and the history of the con.

The writer Guest of Honour was Michael Carroll. He was also a great guests with many interesting things to say. I must mention that all GOHs knew each other and I found it really cool to watch how they talk together.

So many items to watch

Most of the time, between one and three programme items were broadcasted. Occasionally, a fourth item would take place but it was rare. Still, there were many interesting talks and panels. Interviews with the Guests of Honour are a good example but not the only one. I managed to listen to a very good talk by Gillian Polack – Understanding Cultural Bias in Our Fiction. It was an interesting description of how we create and understand the fiction. Also the panel titled 4th Wave Feminism in Sci-fi and Fantasy was a good food for thought. In case you want to see some of the items that took place during Octocon you can do it on Twitch.

Waiting for the Zoom talk to begin.

For some reason, the goose or to be more precise the goose from Untitled Goose Game became a thing during the con. It was visible on some panels and the convention chair took the opportunity to play a bit and stream it. Now I know that I definitely need to try playing the game…

I really miss Ireland and I want to visit it again. I have many great memories from this country (both related and not related to conventions) and I am sure I’ll do my best to have more. The virtual Octocon was not only a good and fun convention but also a way to glimpse a bit at Ireland in 2020. I really regret it was impossible for me to be there in person. It would be great for the con to celebrate the anniversary with a huge in-person party. Yet I am happy it was possible to have it hosted online. From what we were told during the closing ceremony, there were visitors from 23 countries! I believe it is a much larger number than usually appears at Octocon. In terms of number of attendees – over 300 people used the Discord server and over 400 visited Twitch. I think those numbers are pretty cool!

I had a great time at Octocon and I know that when I’ll get a chance, I will attend it again. 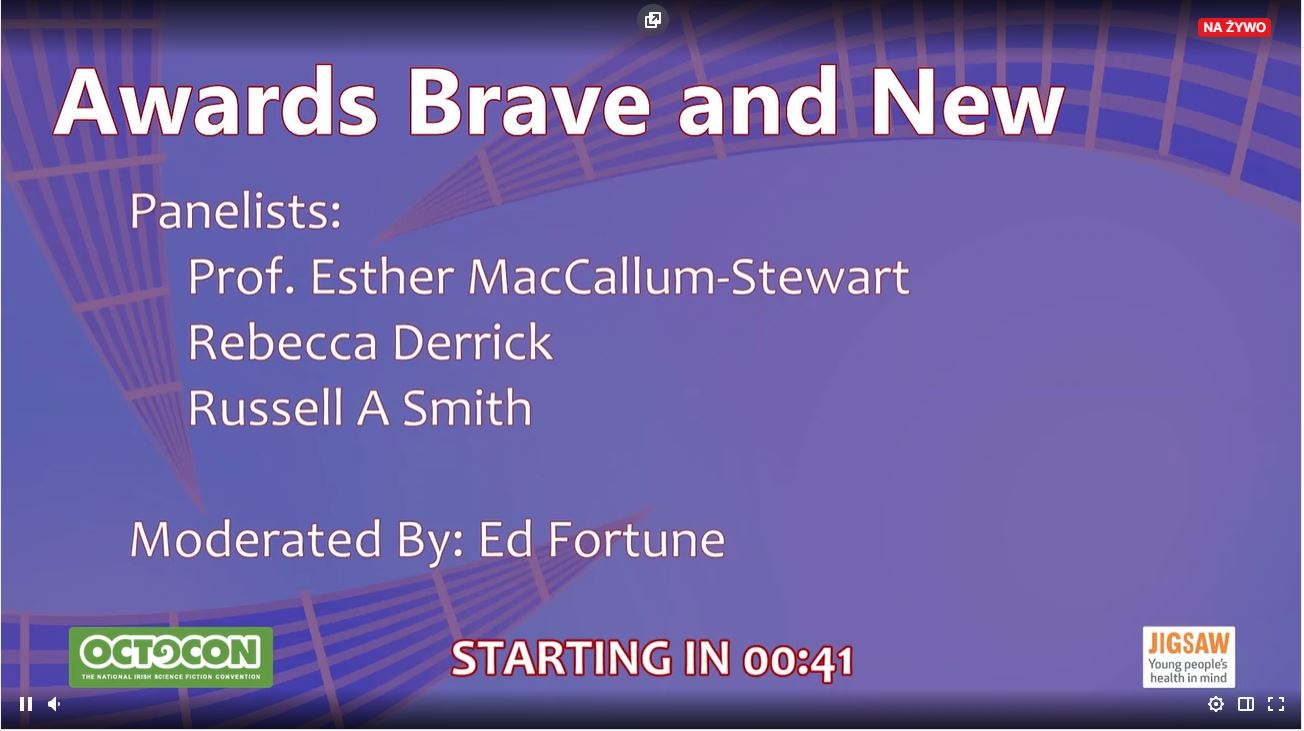 And to finish my post I am pasting the first screenshot I took during the con :).

My next post will be posted within two weeks.