I like novellas. They are long enough to tell a more complicated story but are relatively short and thus allow us to read them fast. Some of my favourite SF works fall into this category. I was looking forward to read nominated novellas.

Please be aware that the post below may contain some spoilers.
The order in which I covered the stories is not the one I used on the ballot.

The Empress of Salt and Fortune by Nghi Vo was a nice read but it missed something in my eyes. The characters were crafted well. The world was interesting and so was the plot. Yet when I finished reading I had the feeling this is just a part of the bigger story. I didn’t like this feeling. Don’t understand me wrong – the book was nice. I enjoyed my time reading it. The problem is that it didn’t exactly feel like a stand-alone piece that I would nominate for the award.

Looking from this perspective I should complain about Come Tumbling Down by Seanan McGuire. This story is definitely a part of the cycle yet I was not feeling that it misses something. It was a full story that made a perfect sense for me. I ready the first text from this series – Every Heart a Doorway a few years ago and I enjoyed it immensely. The work nominated this year is the fifth volume and despite not reading volumes two to four I did not had issues understanding it. Yes there were some references I didn’t catch. The other I recalled from the beginning of the cycle. Yet even without reading a single piece before it would make sense to me. What made me enjoy it so much? First of all the worldbuilding. I love the idea of doors that can bring people to other worlds. I like how those worlds work and also the fact that not all of them are fully logical. The Moors where this story takes place are interesting. Their internal logic is a bit fairy-tale like but it is way gloomier that most of such lands. The world where different types of “monsters” keep the equilibrium between themselves. The world where mad scientists fight with vampires but both of them need to obey certain rules. It was fascinating to observe this. It is also important to point out that the style Seanan McGuire uses is very good and it emphasizes the story. 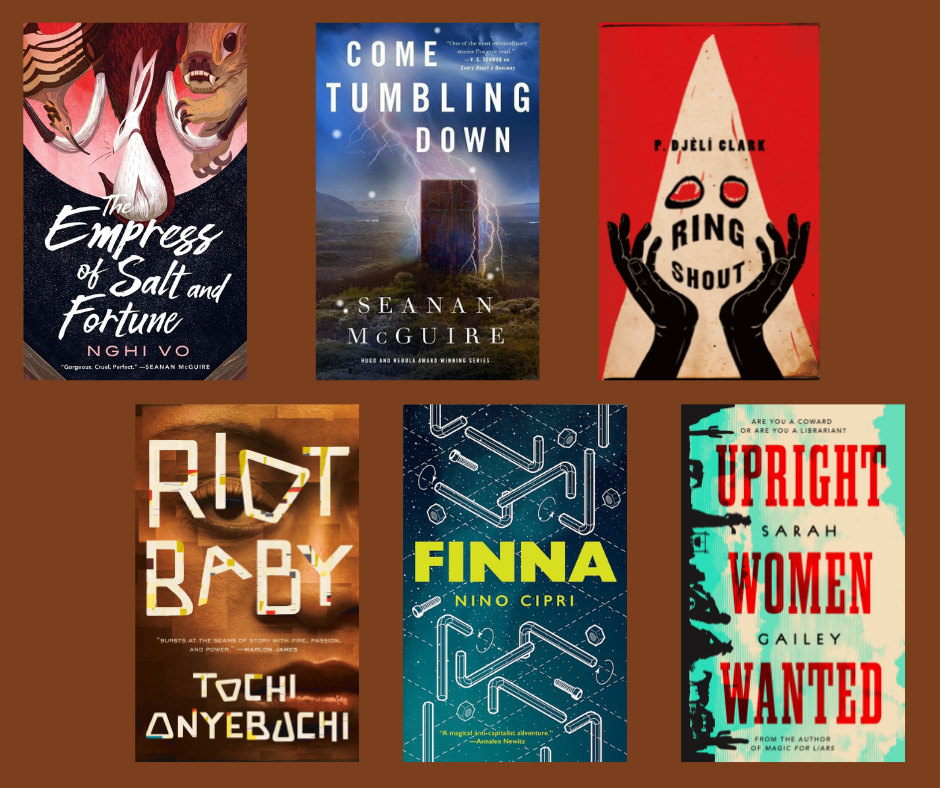 The covers of nominated Novellas.

Two of the nominated works concentrate on the problems caused by racism. The first is Ring Shout by P. Djeli Clark and the second one Riot Baby by Tochi Onyebuchi. The first one made a great read for me. I may point out some things that I didn’t like but overall it was a fascinating book. Author created an interesting world, well-crafted characters and engaging story. Yes it was brutal and terrifying. Yet this was not changing the fact that it made and interesting reading and that it presented some important social issues. Riot Baby was not so good. In a way it worked better as a presentation of racism. It allowed me to better understand the issues of police brutality and racial prejudice. Yet it was not as interesting as Ring Shout. This may be related to language used. As a non native speaker I had some difficulties while reading Riot Baby. They were not as serious as to prevent me from reading. Still they made it harder for me to concentrate on the story as I had to think about meaning of certain words and phrases.

I liked the anti-capitalistic novella Finna by Nino Cipri. In the story characters learn that their world is a part of the multiverse. Some of the other worlds are very dangerous while others seem to be a bit more peaceful. Protagonists work in a big chain of furniture shops. When a portal to the other world opens and one customer is lost there they need to go for the rescue. The company once had special teams to perform such actions. Unfortunately because of the budget cuts now ordinary employees needs to do the job. The job which is life threatening but why should the company care? One of them is a volunteer, the other is forced to go on a rescue mission. I will not go into details of the plot – you may read the story yourself. What I liked apart from the story itself is how naturally the non binary character was introduced. I also liked all the references to the Ikea company – I just hope that they are not as bad as the LitenVärld pictured in Finna.

Upright Women Wanted by Sarah Gailey was another great reading. I liked it as it shown that there is a hope even in dystopian world. The post apocalypse world portrayed here is a bad one. Due to scarce natural resources humanity had to go back to using horses and so the world became bigger once again. We may say it is optimistic that despite the global warming and huge impact on our civilization we managed to survive. Yet there was a price – the new government is extremely conservative and intolerant. It is also willing to overuse capital punishment. The control government exerts over all of the information including books is terrifying. Yet even in this world there is a hope for change. Many will die before the world will change but there are true heroes there.