Another year and another Eastercon. Reclamation 2022 was the first Eastercon that went hybrid. Although organizers stated that the virtual part will be small I dare to say it was rather big. It missed a bit of the social aspect but from the programming perspective it was great!

I was enchanted with the Reclamation programme. It was a good mixture of different topics and great set of participants. I didn’t manage to listen to everything I wanted but most of what I attended was superb. It is not so easy to choose my favourite item. Too many of them presented excellent quality. Yet there are a few I must mention – I consider them too good to try ranking them. The list is in order in which they took place. Peeing in Space was a masterpiece. Extremely fascinating and possibly also a bit disgusting for some. A lot of knowledge and some jokes – all in all a good mixture. The BSFA Lecture: Science Fiction Communities in the Rainbow Age – a lecture given by Farah Mendlesohn was a great to listen to. Very interesting comments on the SF research and fandom. I am awaiting for the paper to be published to read it whole. It certainly will be fascinating. And then another lecture – The Hay Lecture: Witnessing The Dawn Of Galaxies given by Rachael Livermore. A great talk about the new space telescope we have and what we hope to be able to learn about universe thanks to it. The speaker knew how to pass a lot of knowledge and add a bit of humour to it.

I also enjoyed two of the interviews with GOHs that I managed to listen to. One with Mary Robinette Kowal and the other with Nicholas Whyte. Both guests had a lot of fascinating things to say and they both had great interviewers. I regret I didn’t watch the interviews with remaining GOHs – Tasha Suri and Philip Reeve. The last item I want to mention is Lecture: How Fiction Affects Your Brain by F. D. Lee. It was very interesting. The presenter had a great knowledge of the subject and the topic was fascinating. I had no idea to what extent what we read may change who we really are and what actions we will undertake. 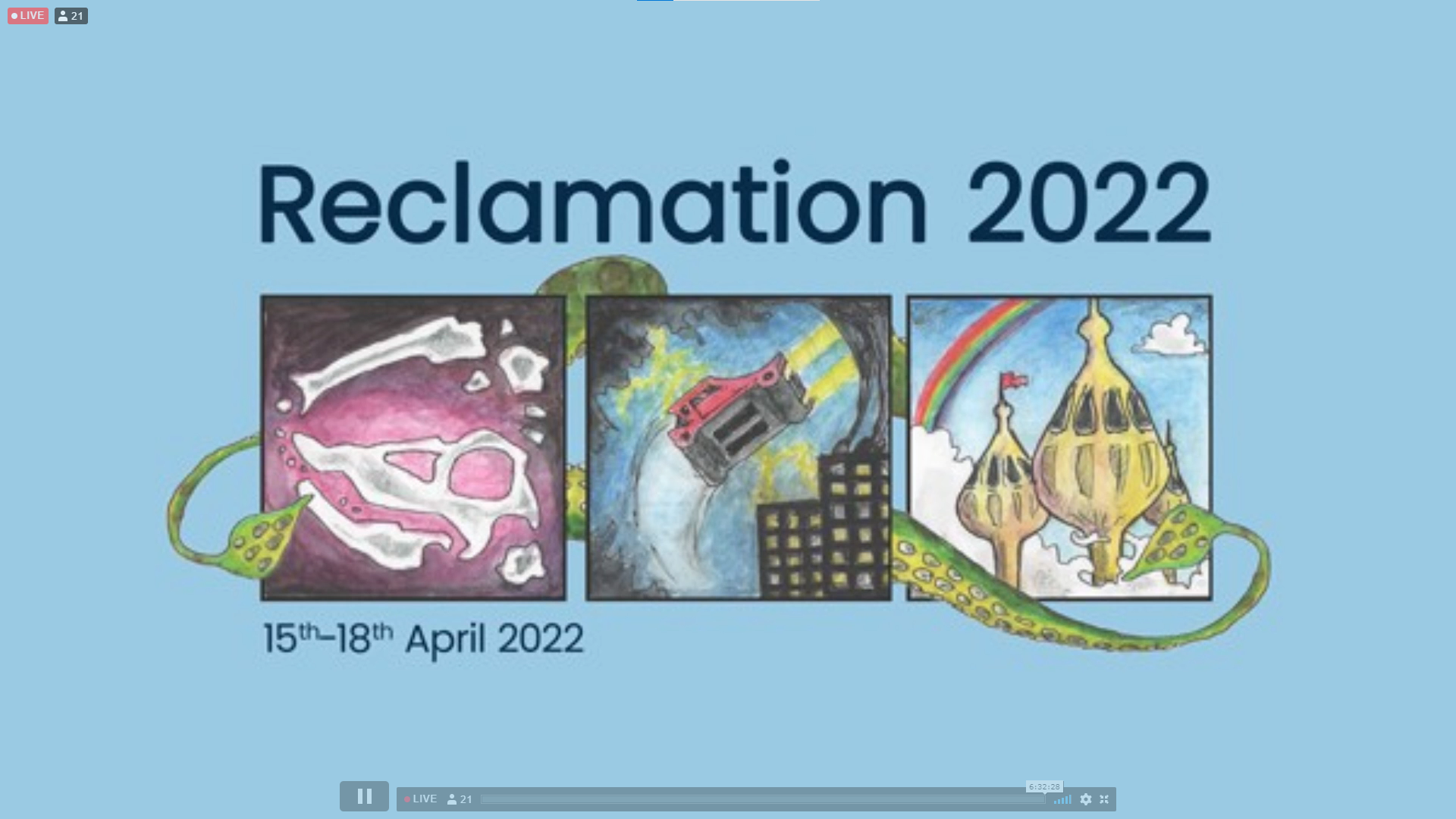 The screen that was shown during panel breaks at Reclamation 2022.

I would not be myself should I not pay attention to how the con is made. I wasn’t helping so I don’t know the details but I saw the final effect and I must admit it was pretty good. Of course there were some issues. On Saturday streaming started a bit late. On Friday there were some issues with the sound level from one of the rooms (two mics were loud the rest very quiet). I am sure there were more things one could complain about. Yet all in all the quality of the audio and video was very good. People who were responsible for streaming did a terrific job. They had to juggle between the presentations and speakers. In some rooms there were more than one camera and they were switching the view multiple times during a single programme item. My feeling was that instead of simple stream from the room I received a well directed material.

I didn’t have enough socialising. Reclamation was to great extent a “programming con” for me. Discord was not very active and I was rather in a mood for face to face conversations and not to text chat. My main social event was Glasgow in 2024 party. We did two parties at the same time – one on site (and it looked quite crowded!) and the other on-line (it was way smaller). Thanks to the blessings of modern technology we – online people – managed to see what was happening in the room. I was told that our Zoom was streamed on a big screen in the room. It was nice party to attend. We had some pretty interesting conversations and very nice atmosphere.

I said I was in no mood for Discord but of course it doesn’t mean I didn’t use it. First of all I was monitoring Glasgow in 2024 virtual fan table. It was not very busy though. The busier part was in another channel. Once someone asked for virtual bar it was mentioned that there were not enough volunteers to be able to moderate it. As a reply to that one of the members created a thread for the bar. It was like a MUD game and I loved it. There were not too many posts inside but people who made it running did a terrific job. With some nice running jokes and great ideas. It was a pleasure to read through it – thank you!

I lost part of the convention as I participated in the Easter celebration with my family. Still what I was able to see went very good. Reclamation team did a very good job in delivering online part of the convention. I can only suppose that on-site participants had a great time too. I am wondering whether I will be able to make it to Conversation – the Eastercon in 2023. Time will tell.