Over two years ago I attended ZjAva – my last convention before the pandemic started. Since then I managed to participate in many cons but I always did it online. Yet Luxcon Eurocon 2022 was the first from a new era for me. I am back to attending in person. Of course I plan to be at some more virtual/hybrid events but I hope to visit some more in-person ones too!

It was so good to see the people. I haven’t seen some friends for two and more years. Being able to greet them differently than on Zoom was great. Meeting some new people was also awesome. And last, but not least I had the opportunity to meet in person people whom I met online but haven’t yet seen in the real world – this was so cool. I had no idea how strongly I missed all of that. Don’t understand me wrong – virtual conventions are awesome. I appreciate them and think they were a blessing for those of us who attended them. Yet getting back to in-person conventioning was magical. 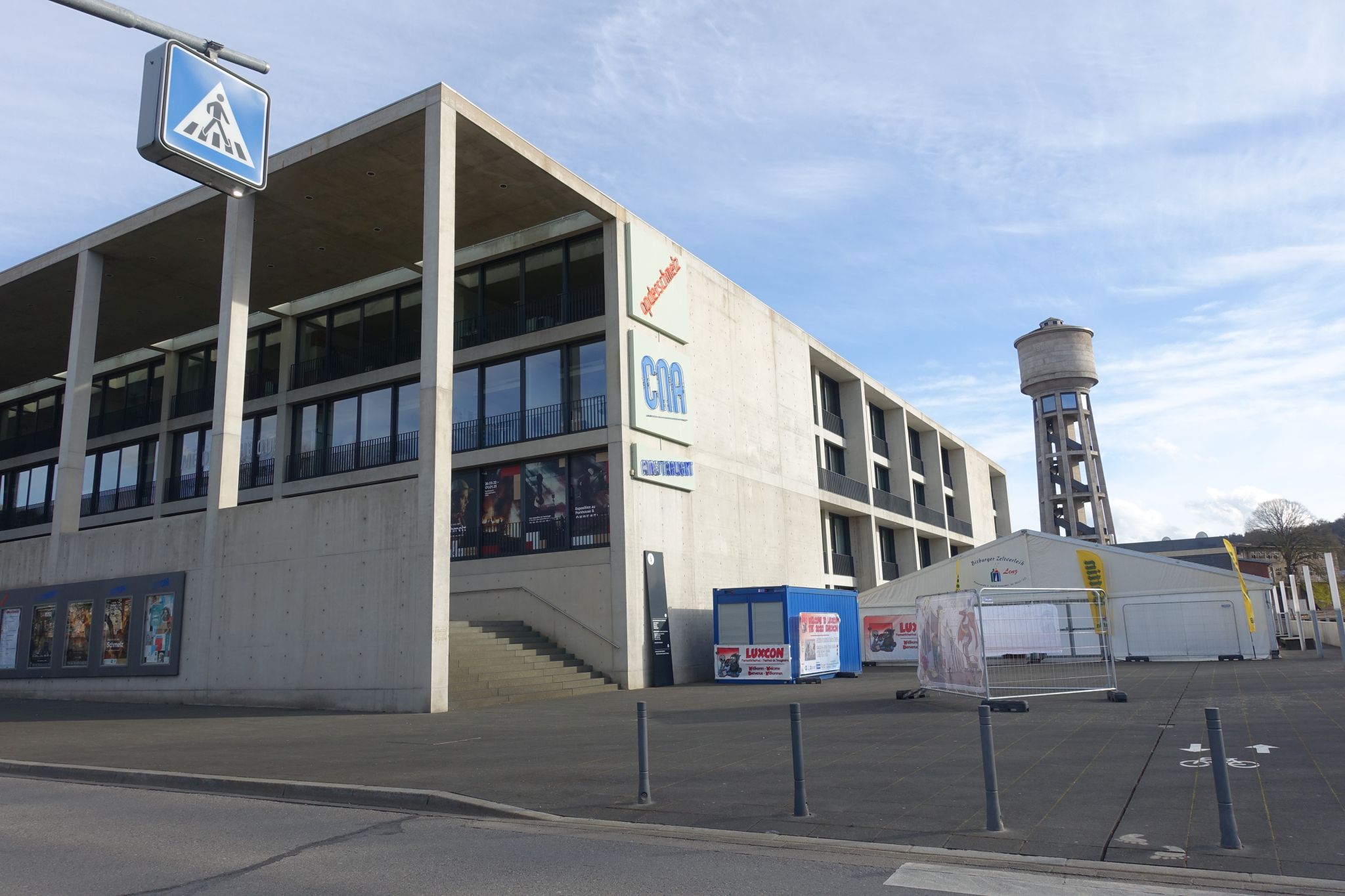 Luxcon Eurocon 2022 with one of the two dealers’ tents being visible.

I regret a bit that Luxembourg cancelled the need to wear masks. Most of the people at the con didn’t have them as they were not required. I decided to keep wearing mine and was a bit concerned about such big gathering (in total there were over 4000 members and visitors to Luxcon Eurocon). Still the rules were as they were.

I didn’t socialize as much as I would do in pre-pandemic times. Yet I managed to talk to people and enjoy it. On the first day – after the opening ceremony there was a walking dinner. Convention organized some catering with drinks and easy to eat food. It was a good starter for the conversations and greeting friends not seen for a long time. Later they offered desserts – I was delighted. I am not saying I ate too much. But I definitely ate a lot ;). 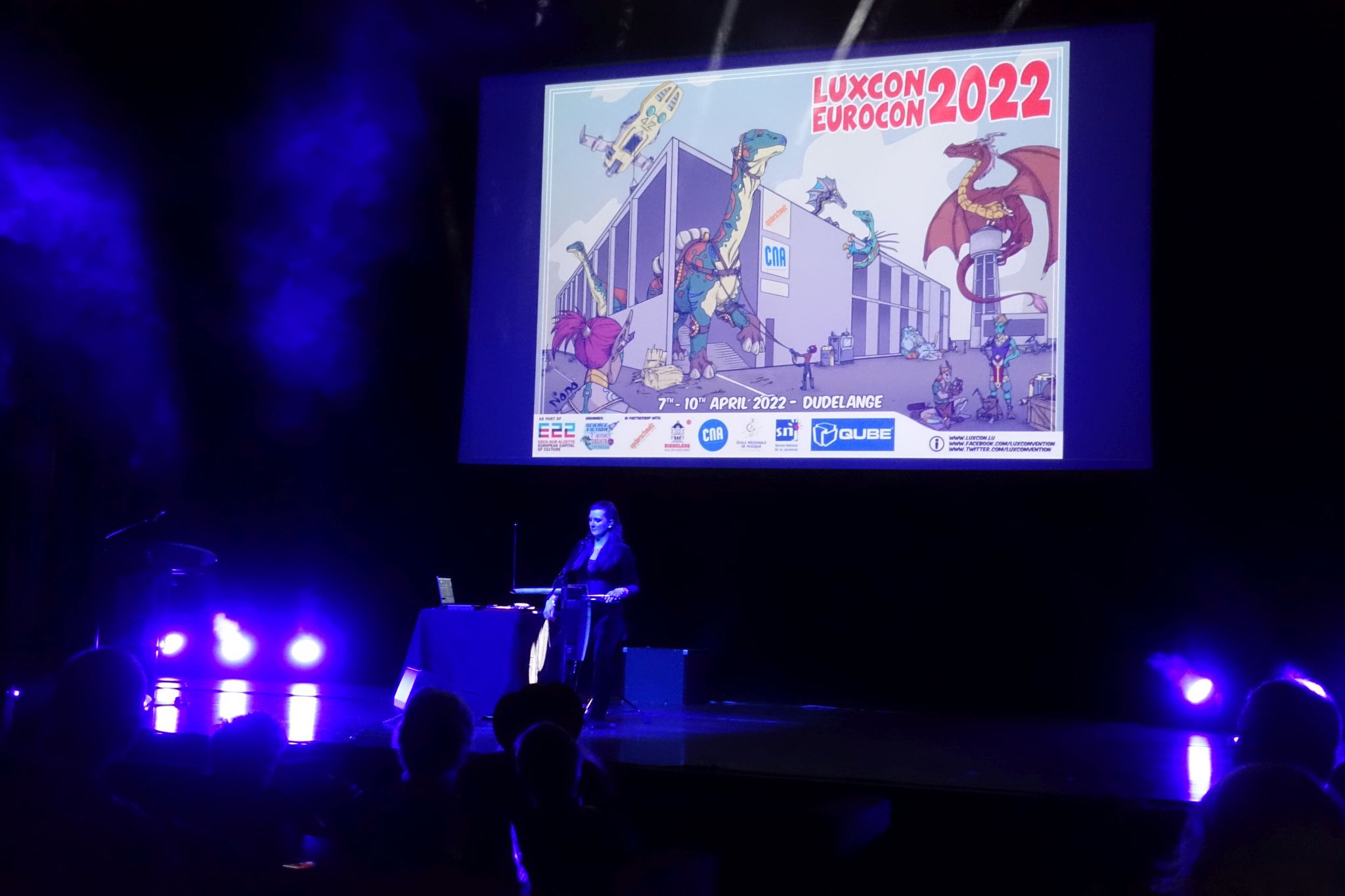 During the opening ceremony there was artistic programme played on theremin.

The next evening I went to a bar/restaurant in the culture centre where the convention was held. I didn’t spend too much time there but again it was a good opportunity to spend time with people. The same happened at the Glasgow in 2024 Fan Table. I talked here with the team and fans from other Fan Tables. I would like to thank everyone who staffed our table – this is appreciated a lot. Here I also met Pam who was kind enough to bring me my set of little Mexican pottery that I bought remotely at Fan Fund auction during DisCon III. I missed the long night conversations in the hotel room. I decided to go to bed early on most nights and so I didn’t experience this aspect of the con. Still regret it a bit… Maybe next time I will manage to stay longer.

On Friday and Saturday I attended two ESFS Business Meetings as a Polish delegate. They consumed five hours of the precious convention time. Still I regret nothing. We had many important topics to cover. Firstly the situation in the Ukraine was discussed and meeting decided on certain actions. Other important matters were related to changes in the statute, presenting ESFS Awards nominations, and elections for ESFS Board. I want to congratulate members of the elected board – Carolina, Saija, Anouk, Fionna and Mikołaj. I am happy that Polish representative sits in the Board. 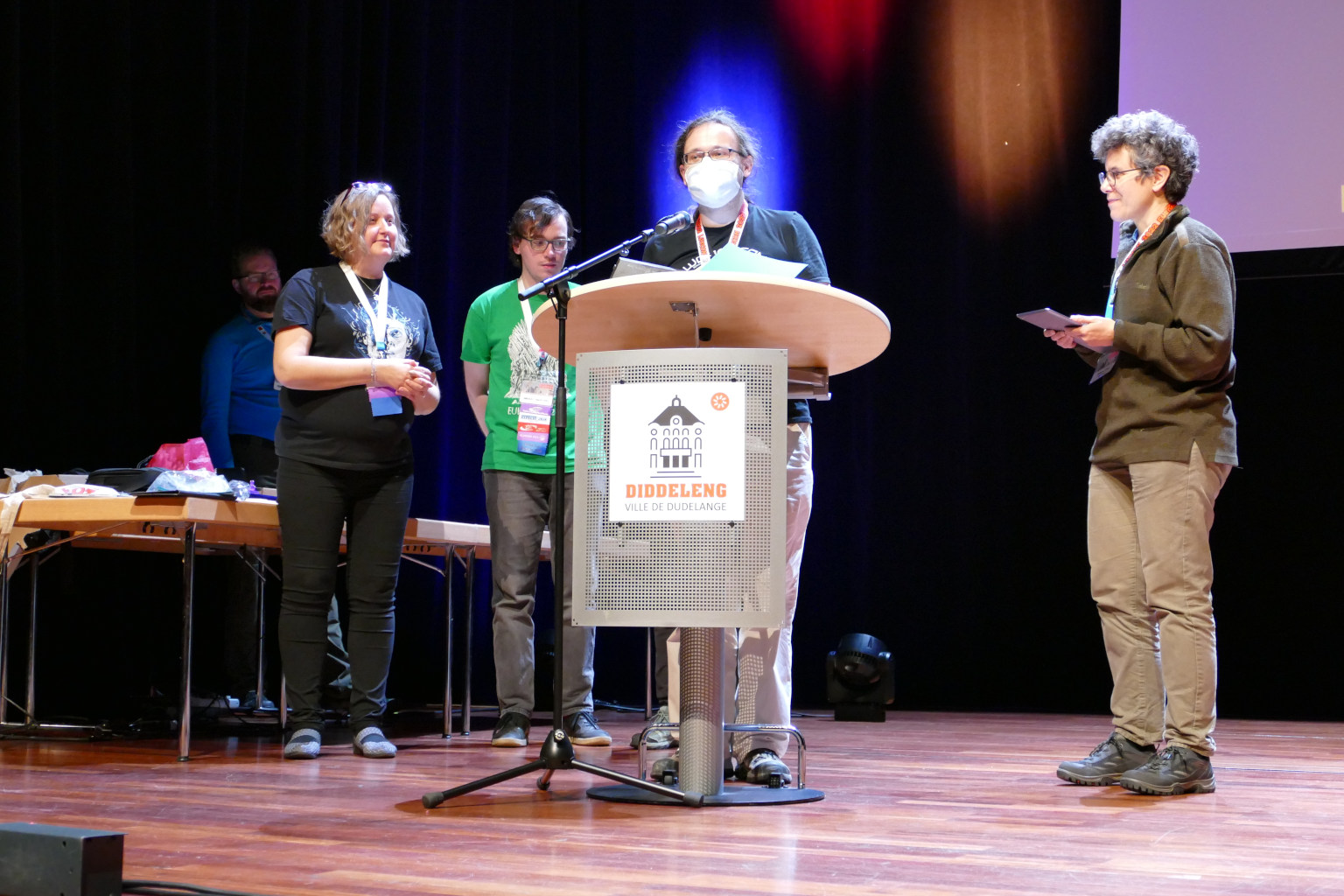 Here I am accepting the ESFS Award in the name of Copernicus Corporation. Picture was taken by PWC.

Together with other Polish fans we discussed the nominations and voted for them. Later we were waiting for the results. I kept my fingers crossed for all Polish nominees but especially in one category. During Award ceremony it occurred that all three Polish nominees won. Best Book for Children was Świat Lema by Marta Ignerska. Best Artist was Roch Urbaniak ex aequo with Igor Kordej from Croatia. And lastly Best Publisher title went to Copernicus Corporation who won ex aequo with Hangar 7 from Croatia. I cannot express how joyful this was for me. One more Award had Polish accent – Best Fanzine issue title went to French fanzine – “Présences d’esprit” 105. This issue was devoted to Poland – I have copy at home – now I only need to learn French.

Speaking about the Awards I must mention how they looked this year. And they were awesome! They had the form of plaque/relief that was casted from metal (not sure whether it was steel or something else). The picture was clearly related to the industrial heritage of the Dudelange area. They were pretty heavy! I had the honour to accept two of them in the name of the winners and I can say that one can feel their weight! 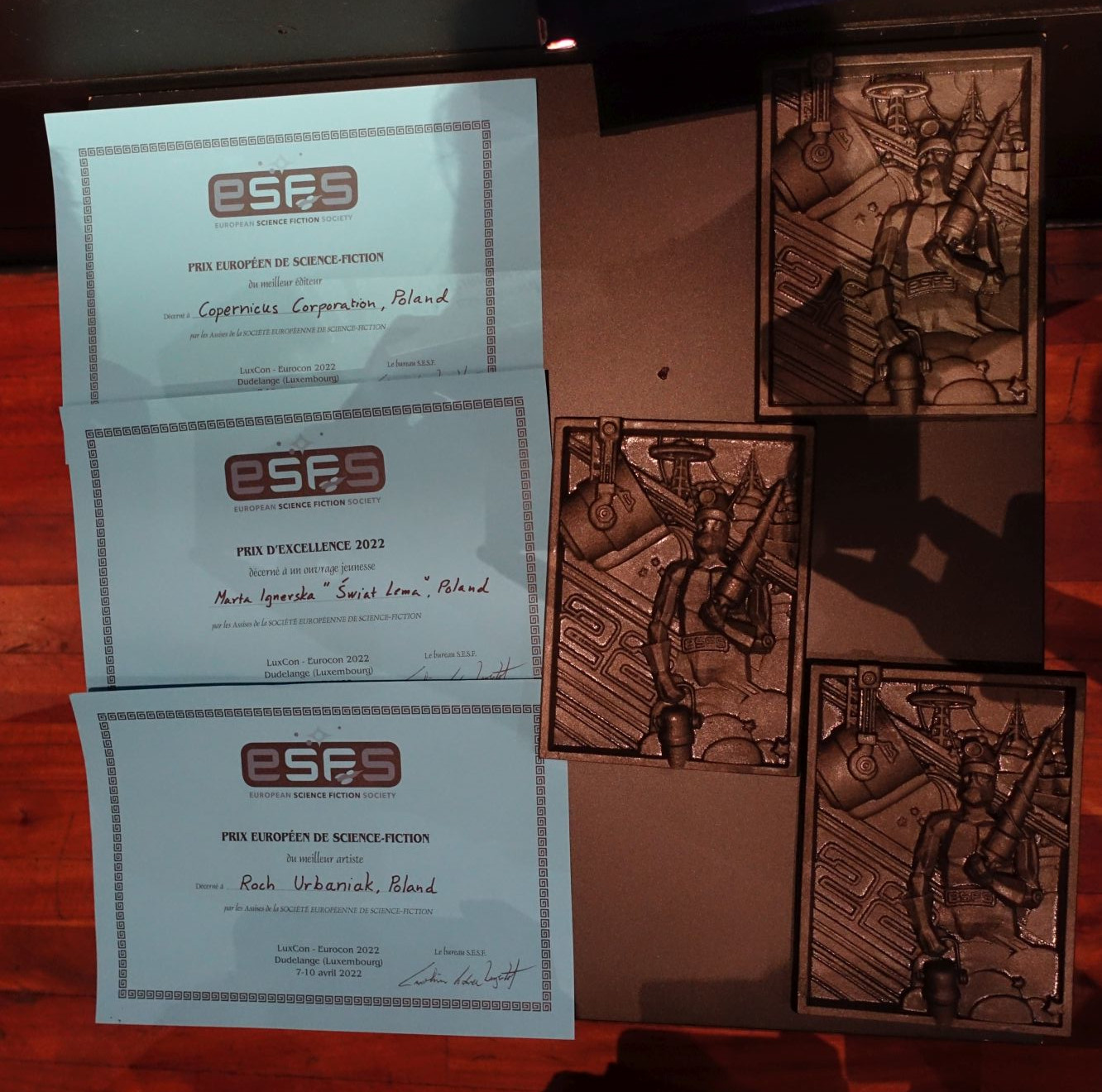 The Awards and diplomas for Polish winners.

When I was observing Luxcon Eurocon announcing the guests I was happy. Great Polish writer – Agnieszka Hałas was among. I was also to learn about invitation of Aliette de Bodard and Arkady Martine. I planned to attend their programme and collect autographs. Yet the reality was different. I managed to visit two items where Agnieszka was the speaker but did not get the chance to listen to Aliette nor Arkady. I regret this and I must look for occasion to meet them at another con. Looking back at the con it seems I attended only two “standard” programme items. Apart from them I visited opening ceremony, ESFS Business meetings, Awards ceremony, and a bit of pub quiz. On top of that I was asked to participate in three panels. Of course I attended those but not as a spectator. 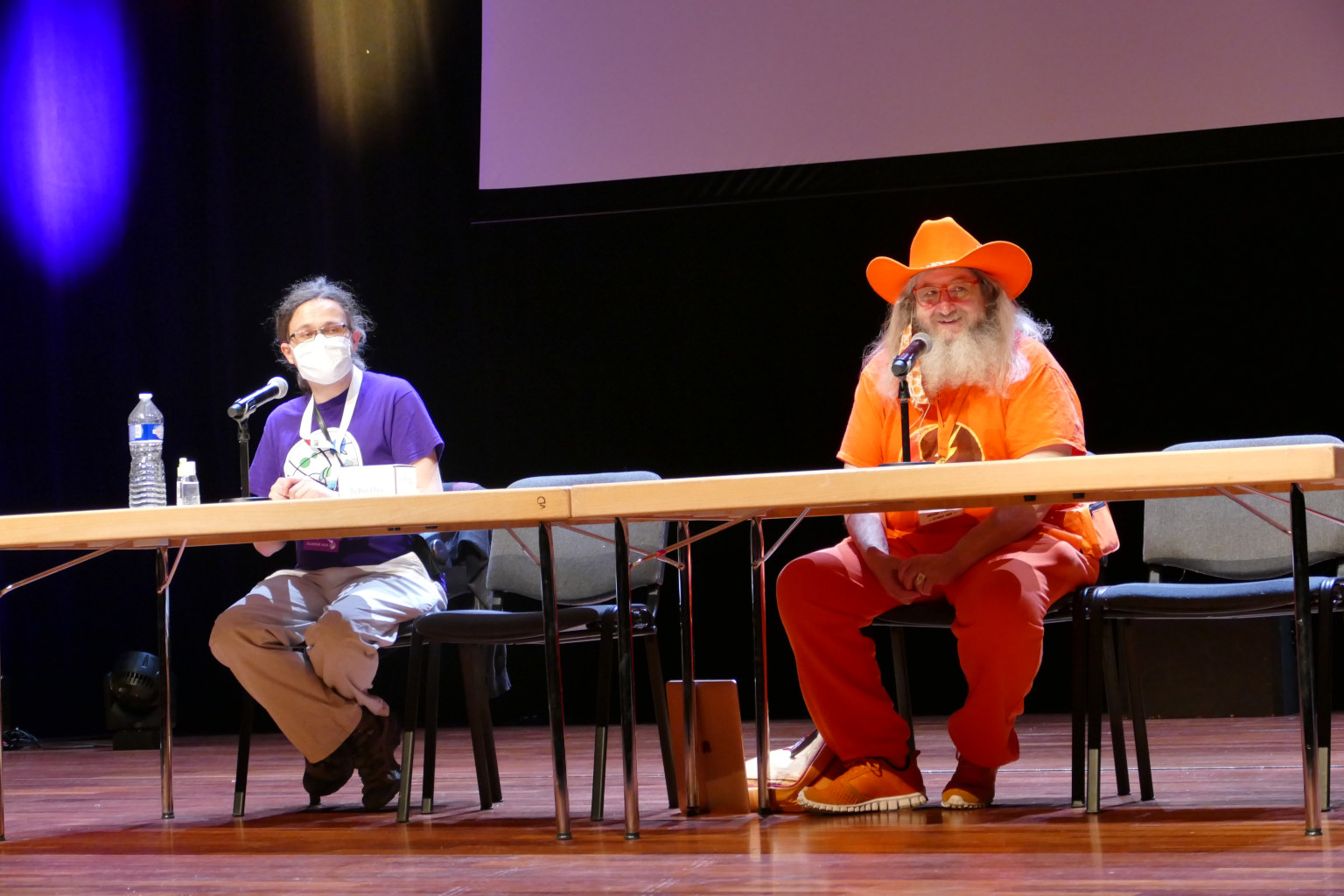 Similarly to my visit at 2017 Luxcon I observed that the programme items were not very popular among the members of the con. Pub Quiz brought many people and it filled in the biggest room but other items had rather small audience (sometimes even very small). It seems to be the way how the Luxembourg natcon works. 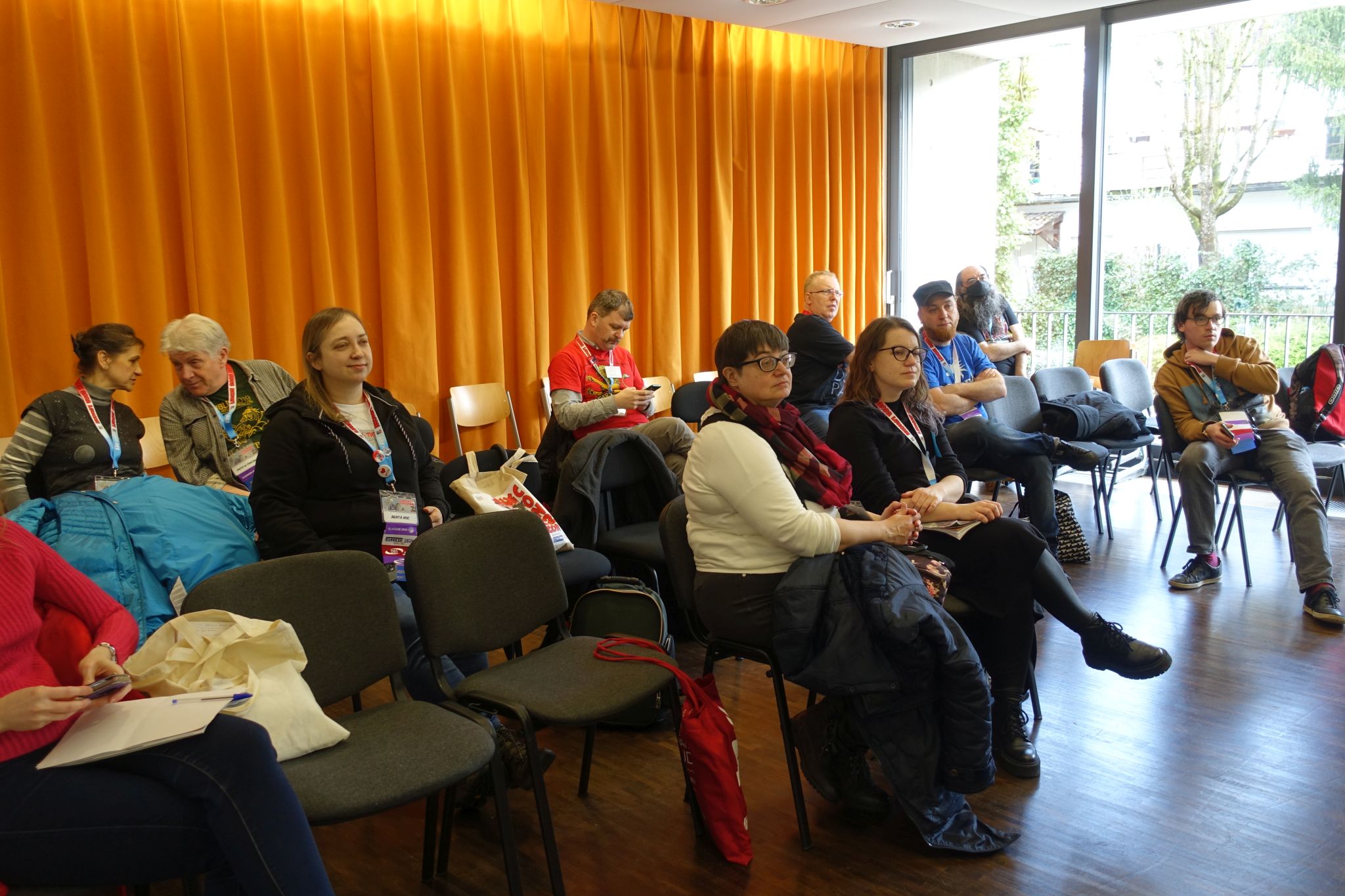 This presentation had high number of participants.

The one thing that didn’t work at Luxcon Eurocon was weather. On Friday we had the possibility to experience rain and snow. I was told that there was even hail but I missed it. Maybe it was only in Luxembourg City and not in Dudelange? Yet even when nothing was falling from the sky weather was suboptimal. On many occasions it was warm enough o make you feel hot in the jacket but without a jacket it was too cold. Of course this is not organizers fault but having part of the con in the tents didn’t help. Fortunately Glasgow Fan Table was next to the heater in the tent so it was not too bad there. Yet ordering food from Food Trucks and eating it was a challenge. 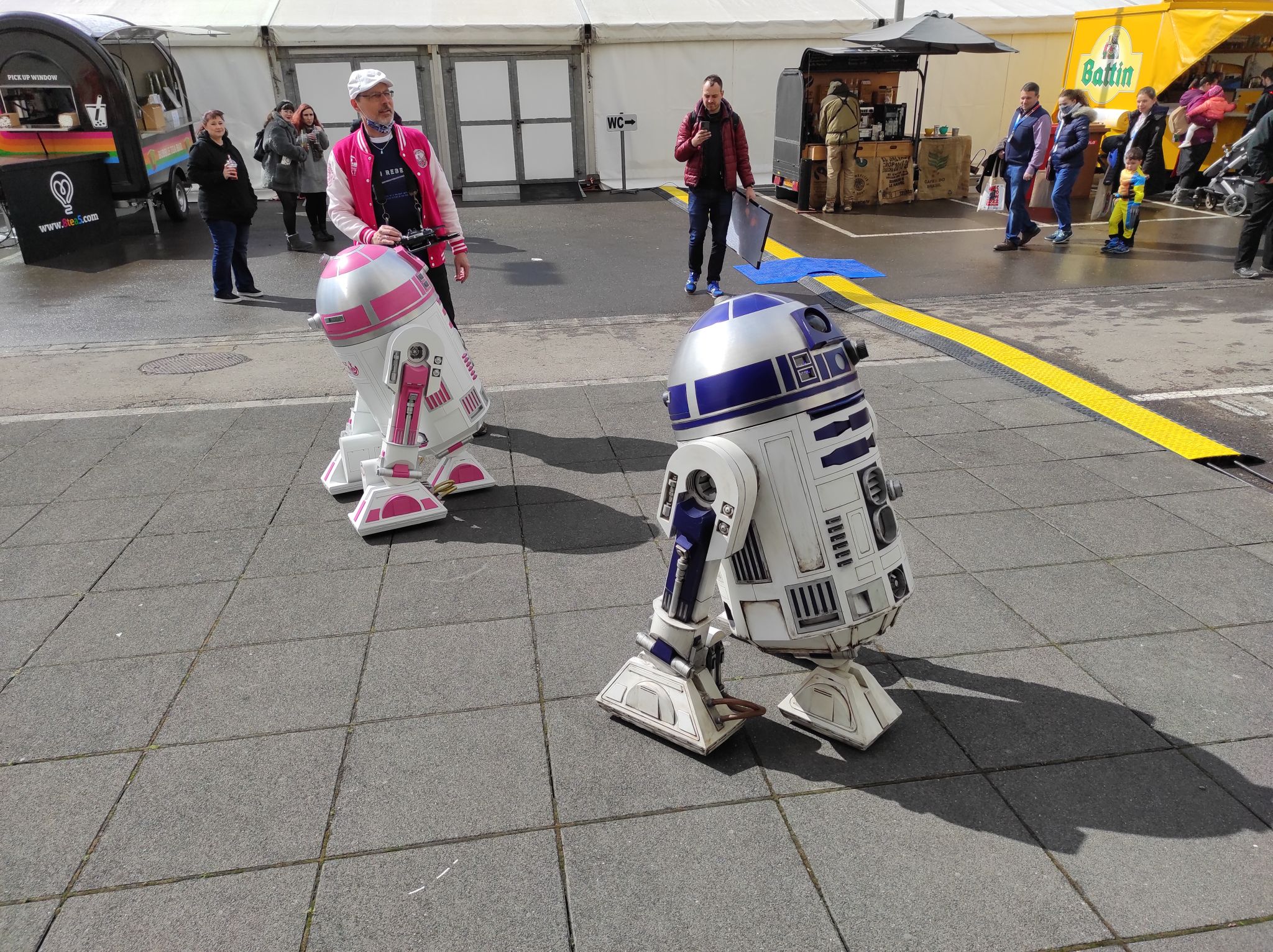 Were they the droids I was looking for?

Saturday and Sunday had way better weather. On Friday there were few local visitors but over the next two days large number of people appeared. W lot of fans had cosplay – they made the crowd look in a uniquely fannish way. At one point in time I met remote controlled R2D2 and other SW droid. I didn’t ask whether they were made by the owners or if they were bought. Still they moved and beeped and it was awesome!

Interior of one of the dealers’ tents.

Unfortunately because of the flight I had to leave convention early on Sunday. The feelings that accompanied me on the way to airport were good ones. I was sad, but in a good way. The sadness was related to missing rest of the con and to the usual post-con blues. But I was also filled with joy. It came from the great time I had at the con. 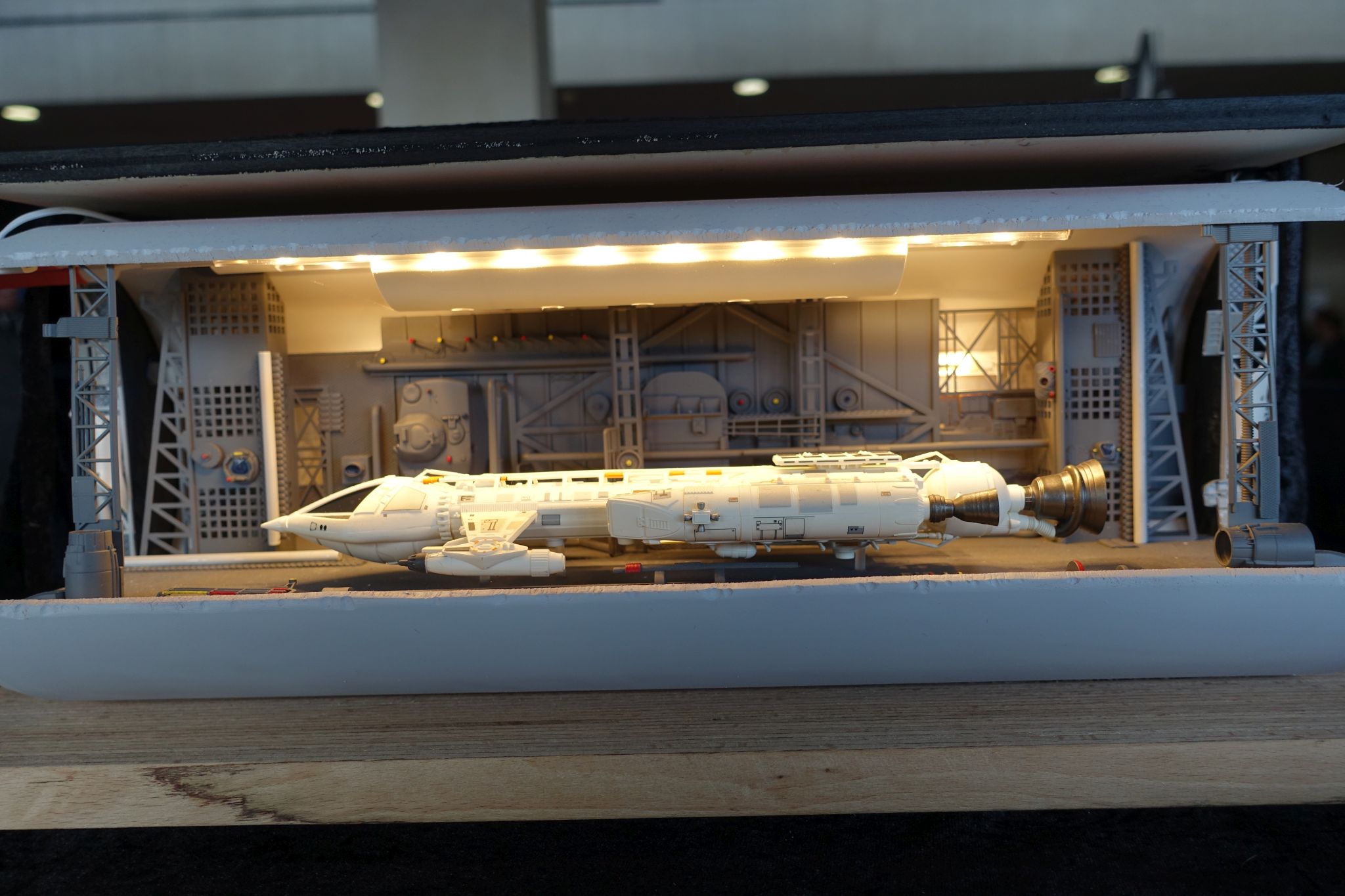 There was a small exhibition of models made by the Model Hobby Club Du Sud Luxembourg.

Coming back to in-person convention life was better than I expected. I was concerned that it will be extremely stressful. And of course the stress accompanied me – I had the mask all the time and I used a lot of disinfecting gel. Yet in general the main emotion was happiness. Seeing all the freerides and discussing stuff with them was amazing. I did a bit of smoffing too and it was delightful. I came back home and I know that I want to go to the next con. Which one will it be I am not sure but I know that more will come.

The next post should be published within two weeks.