I was supposed to visit Pyrkon in 2020 – and as it was the case with most cons that year I didn’t get the chance. The team decided not to go into online form (although they made some other online events, as well as in person fairs during the pandemic). All in all the Pyrkon 2022 was the first that took place after three years that passed since 2019.

Although the con lasted for traditional three days it was in a way longer for me. A week before the con my friend and one of Pyrkon’s guests – Liz Danforth came to Kraków. I took a few days off and together with Seji and some other friends we were showing Liz around the city and it’s vicinity. Those few days would make for a separate post. We saw some cool stuff – including places I have never been despite living here for my whole life. We also experienced some great hospitality and received some chocolate. This was a busy week and a great starter before the Pyrkon itself. 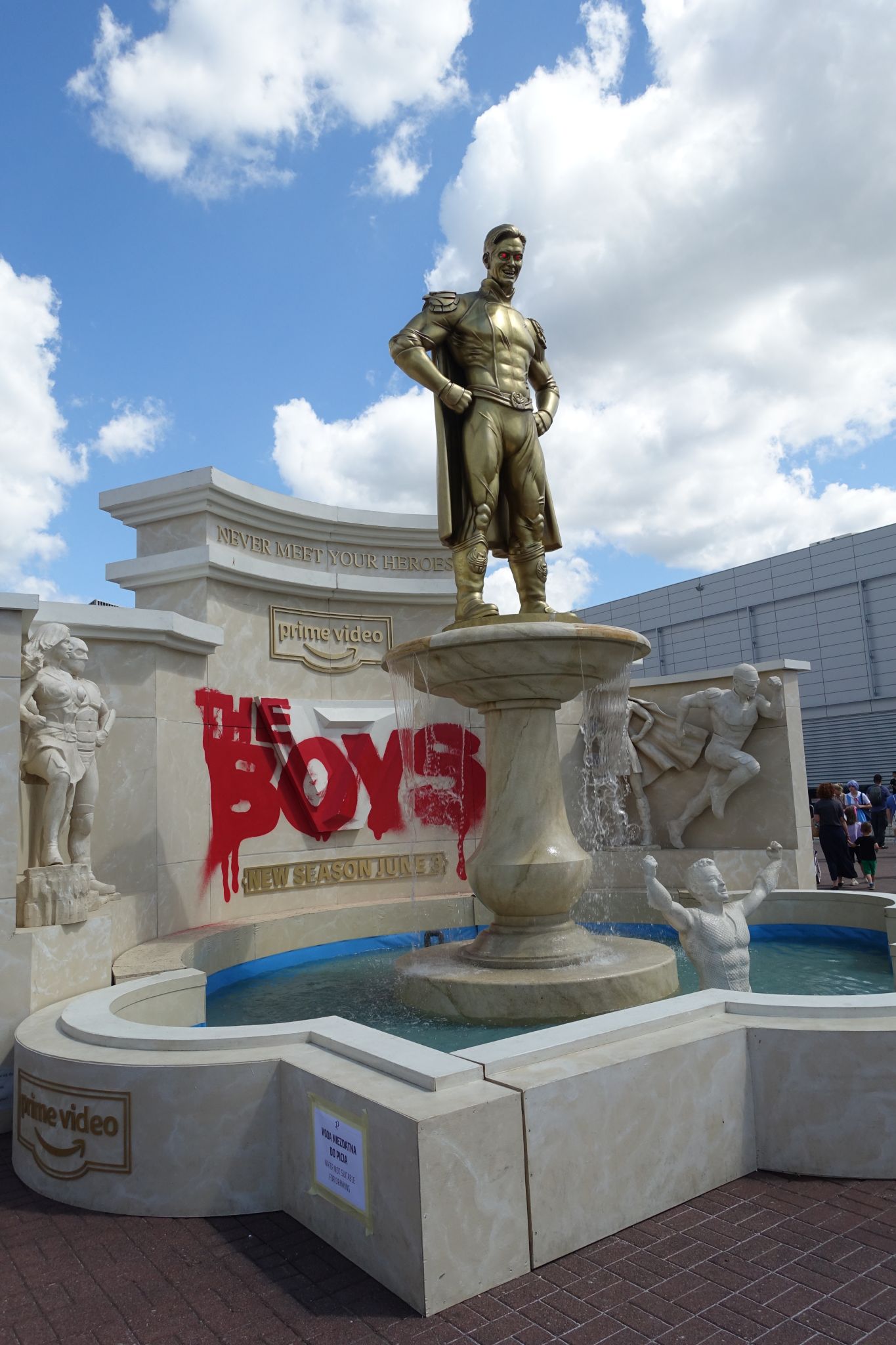 Pyrkon 2022 offered some outdoors attractions too.

And then Thursday came and we took a train to Poznań to attend the con itself. Although it was starting the next day we managed to register on Thursday. Then moved to meet with fellow fans for a dinner.

Pyrkon is a very big convention. I was not sure what to expect this year. On one hand after three years break many fans wanted to come back. On the other hand though the pandemic is still ongoing and many people might made the decision to stay home. Pyrkon also decided not to have sleep rooms. This strongly increased the price to attend as the accomodation was quite expensive. All in all the convention was bigger than the previous one (although not by a large margin). Over 56 000 fans decided to visit Pyrkon 2022. 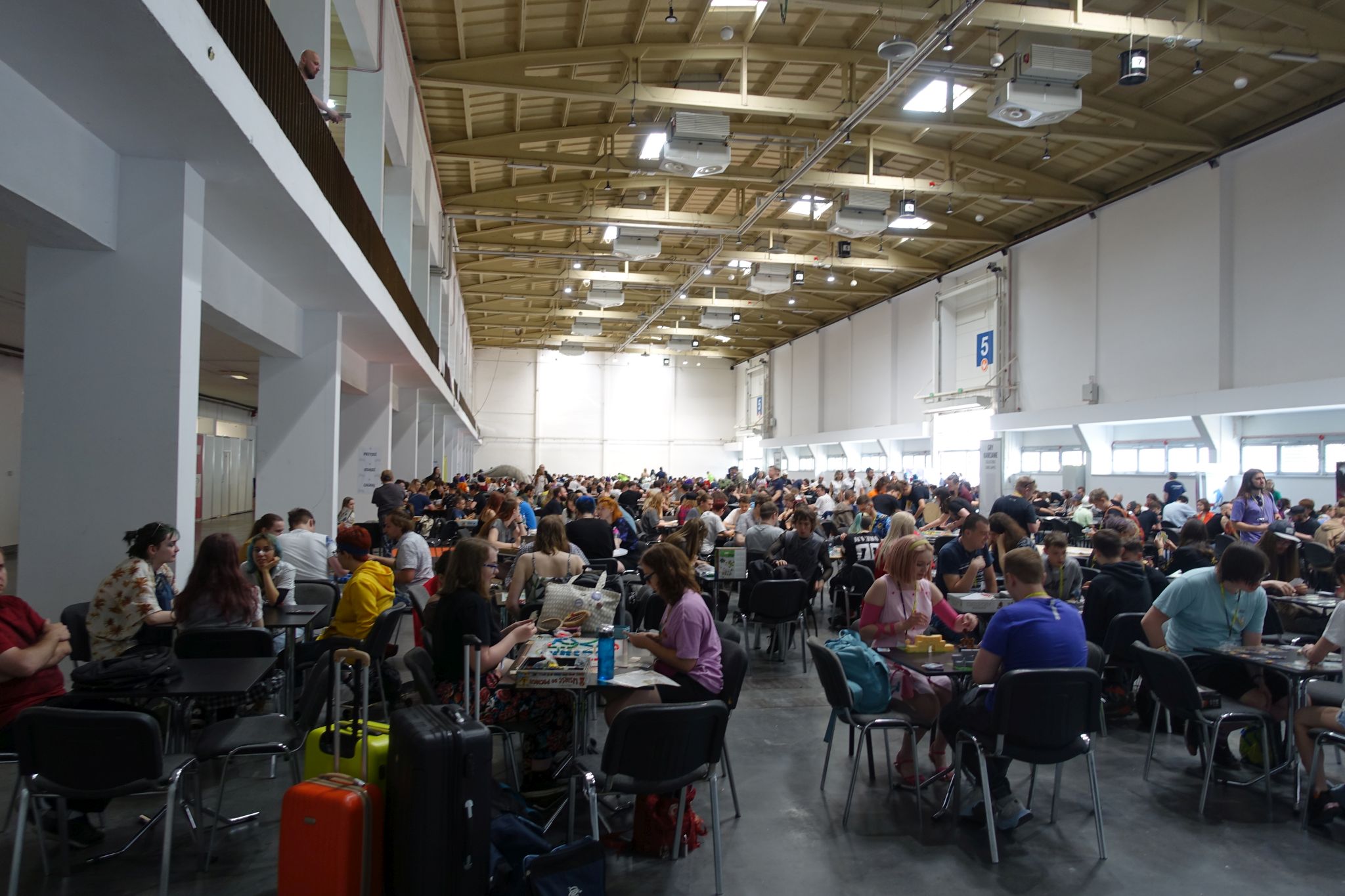 I was quite concerned that there was no policy regarding masks. I was not the only person in mask but I doubt I have seen more than 3-5 more people wearing them. In such crowd it means almost no one had it. I am happy that we are one week after the con and I haven’t heard about too many people who got infected. I was concerned situation would look worse.

Before Pyrkon we learned about one serious issue with accommodation. It seems that some hotels decided to cancel reservations and offer them again for a way bigger price. When Pyrkon learned about it they suggested to report all such cases to booking.com (if this is where the reservation was made) and to local tourism office. I hope that at least the latter will make sure such situations won’t repeat in the future. I was not one of the unlucky ones and my accommodation didn’t do anything like that. It was not perfect but I already made a booking for the next year. When I checked booking.com the day after the dates for 2023 were announced most places that had the bookings open so early were already full. 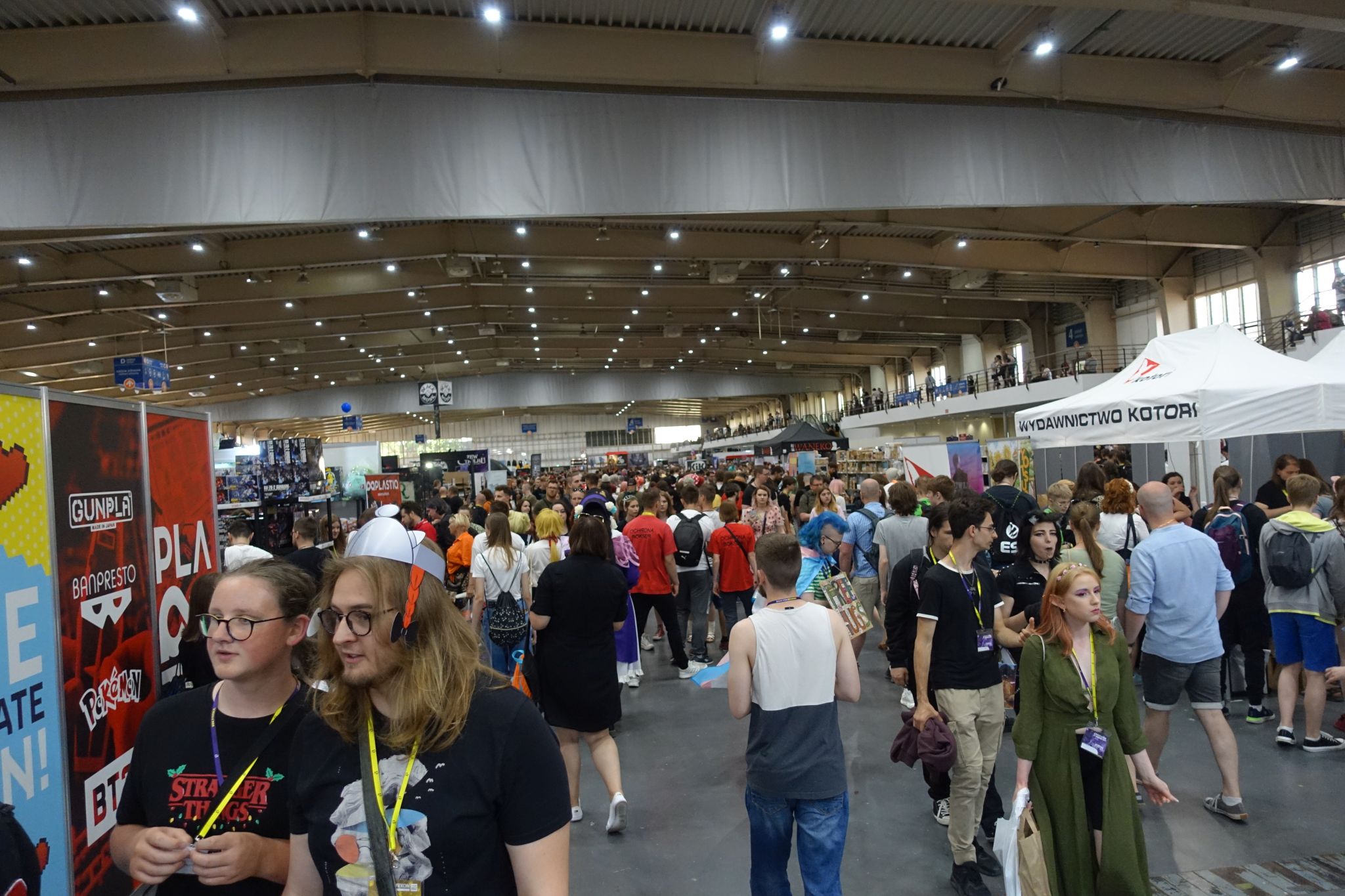 Dealer’s hall was full of dealers and visitors.

Attending Programme is not always easy

Pyrkon is known for huge queues to attend programme items. It is especially true for literature and scientific programme. In previous years it was not unheard of people to go into the queue and wait. They were not sure which item they’ll manage to get into but at least they were able to see something. Because of that and the pandemic I decided I won’t be even trying to attend items in most popular tracks. It means I missed some very interesting talks/panels. Still the chance is I wouldn’t manage to get inside either way. 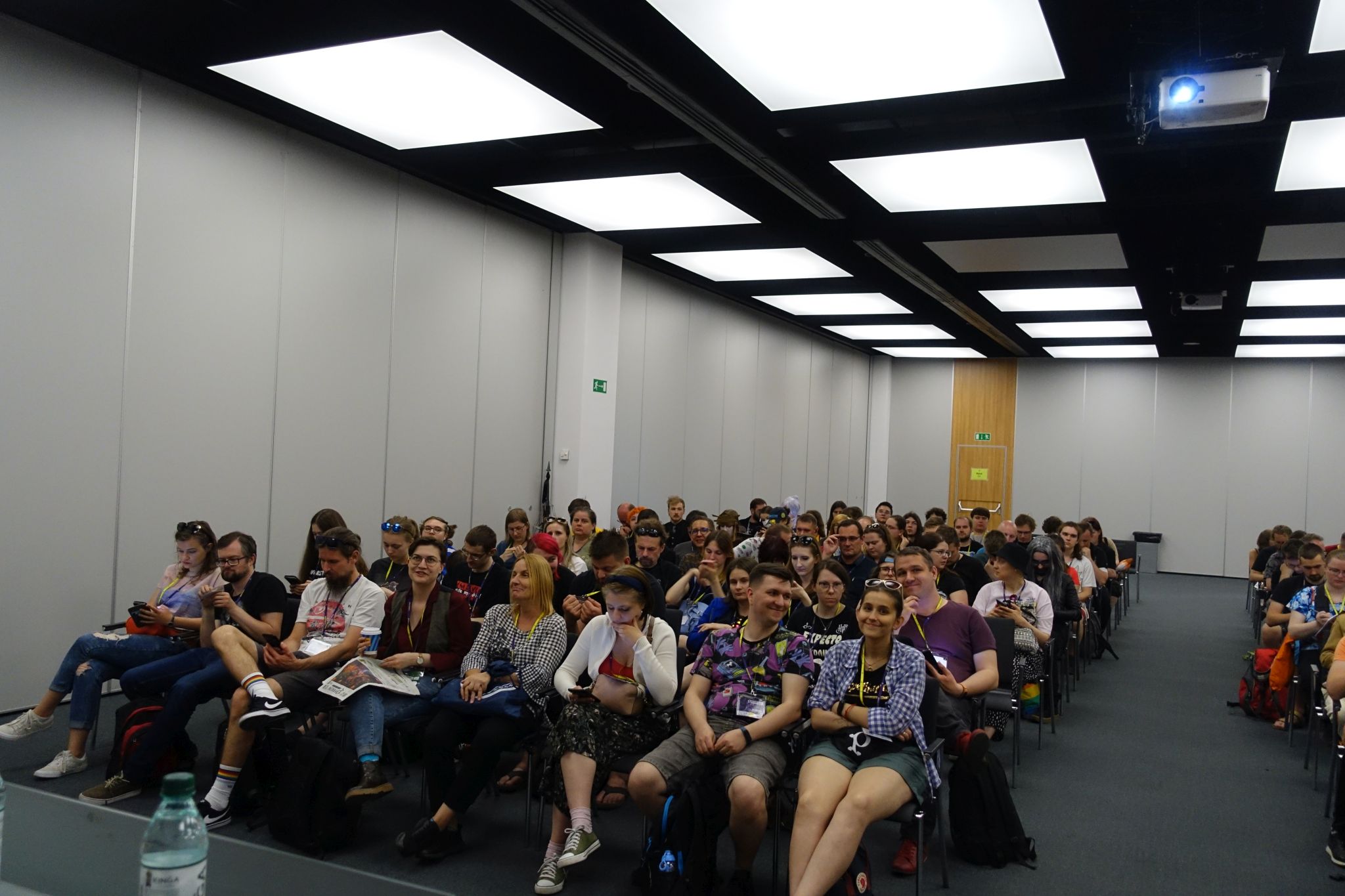 Full room at one of the panels.

I was moderating three panels (two in literature track and one in RPG track). Truth to be told I expected I won’t make it to any other programme item. Yet to my surprise it came out that the programme in RPG track is not as popular. I managed to listen to a talk given by Liz Danforth on RPG Pioneers and to some panels. Probably there were also seats left on other items but I was occupied with other stuff. I was also lucky to attend the workshop Liz gave on drawing/painting. I was there rather to help when needed and I didn’t work on my own picture. What I did however was listening to the presentation and it was fascinating. 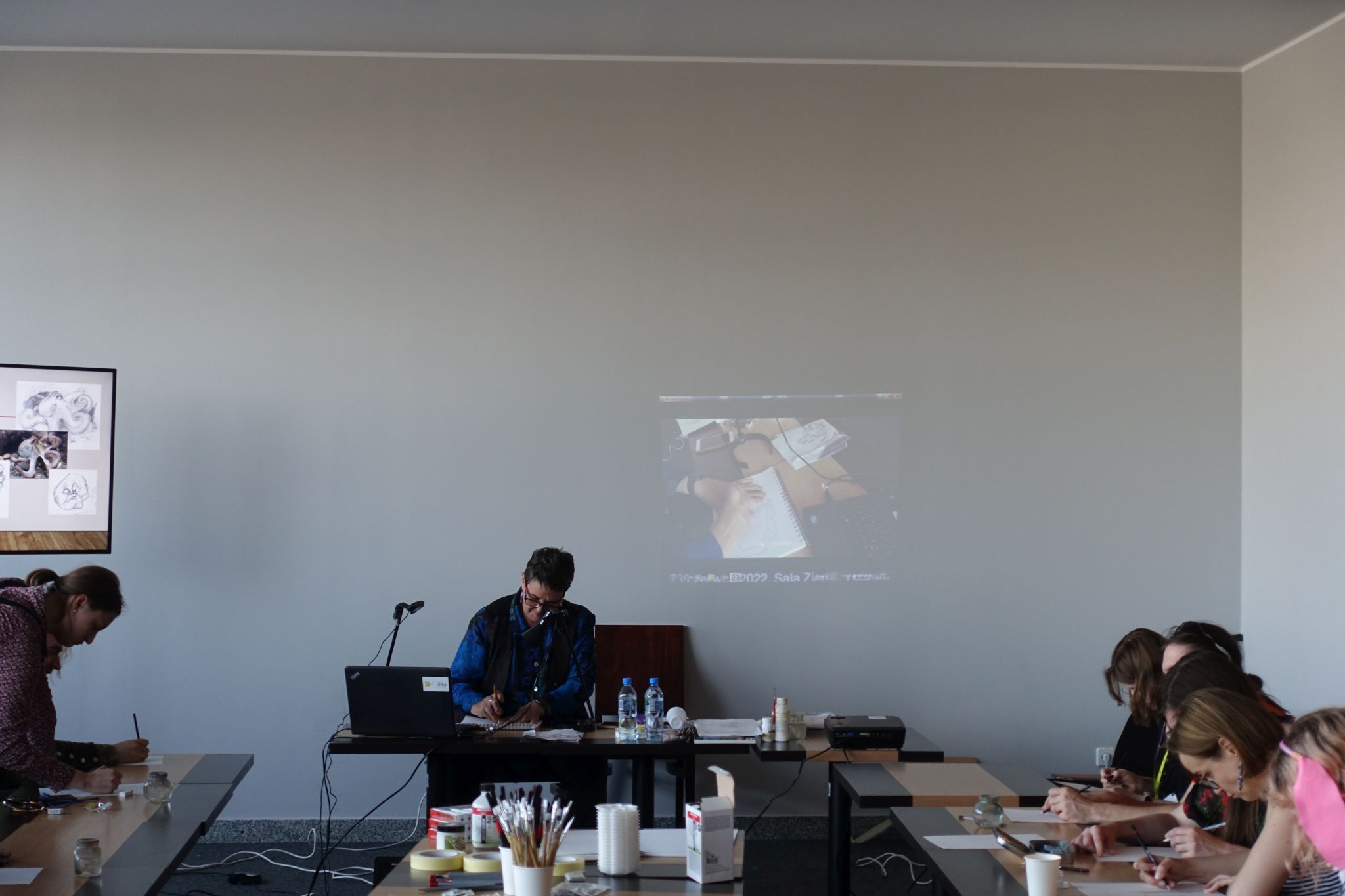 I loved Liz’s workshop and the setup with camera streaming how she is creating art.

On Sunday I was very lucky. I expected that queues to attend signings of Edward James Olmos would be very long and therefore I didn’t even plan to try to get autograph. Yet when I was around the signings area I was told that the signing will start in 30 minutes and there were only a few people in the line. So I decided to give it a try and I have the autograph. It may be a small thing but it is so cool. The reason why so few people where there was because it was the third autograph session for the actor. 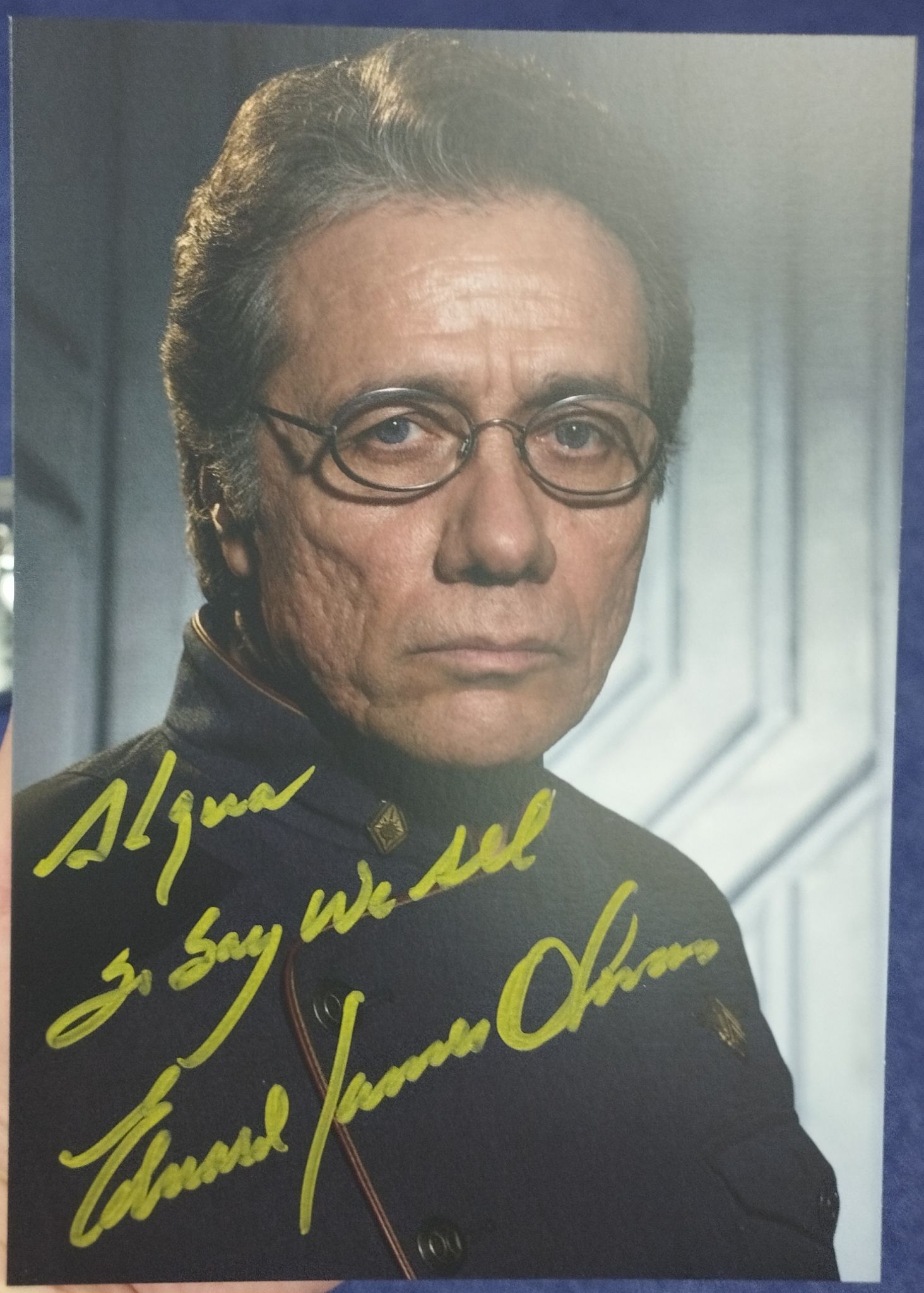 Meeting people is always important. Doing it after a break lasting for so long is even more important. Pyrkon 2022 was busy – with over 56 000 people it was for sure impossible to meet everyone I know. Not to mention to have enough time to properly talk with them! Some of my friends had booths in dealer’s hall and it meant that in a few only had time to wave back (or not even that). With others – I managed to spend some time talking, or playing Dominion (and talking), or eating together (and of course talking). It was so good to be with people. Even though I felt strange being the only masked one (and wearing FFP3 mask in 36 Celsius is not comfortable at all…). Some of the meetings were brief, some longer but still too short. Yet all in all I am happy. 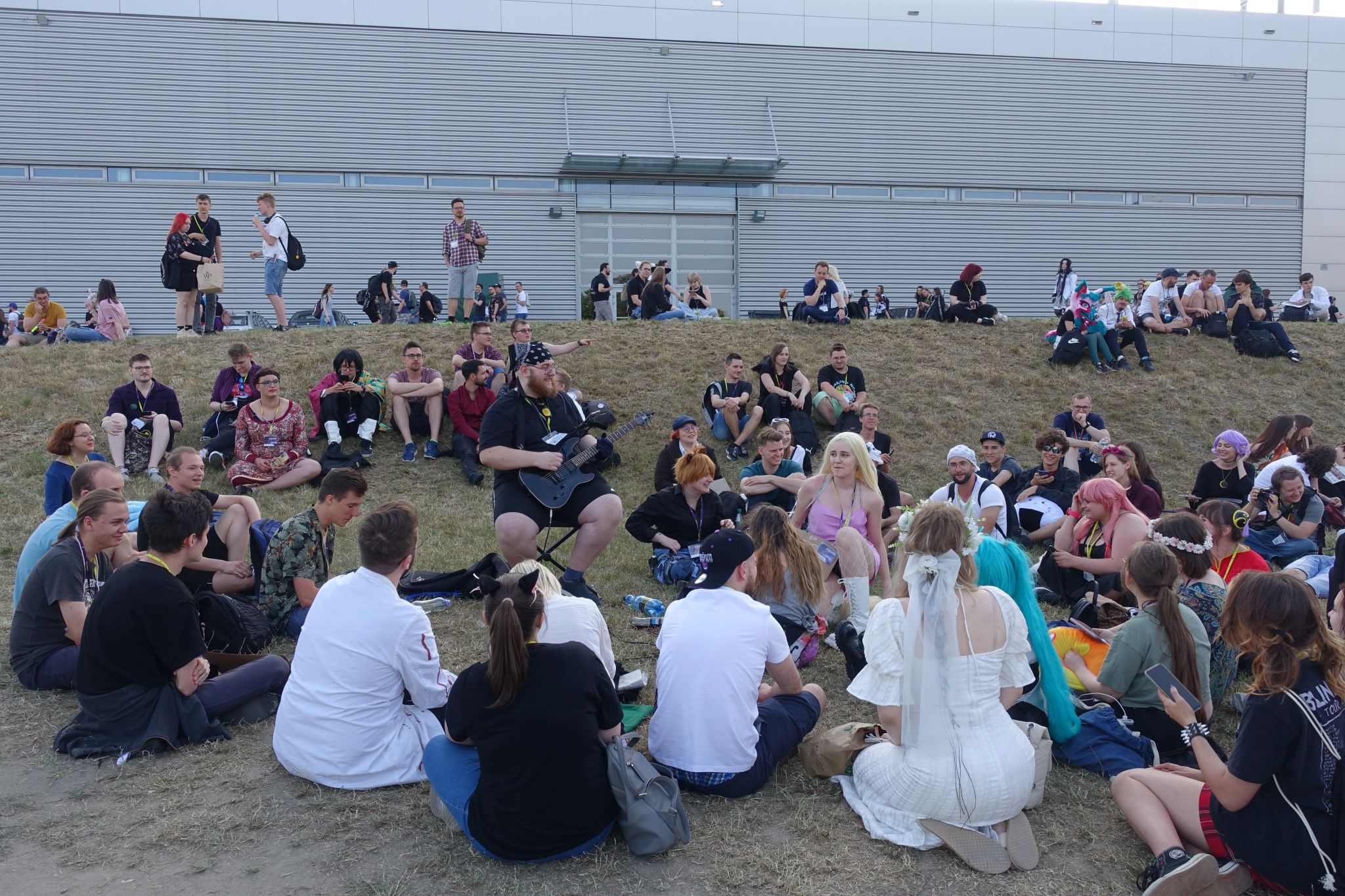 I believe this was spontaneous meeting and people started to sing together well-known (although vulgar) song ‘Chryzantemy złociste’.

Thanks to accompanying Liz and attending her programme items I managed to meet a few Polish fans. It seems that we will have some more chances to talk in the future – both in person and online. On top of that I was lucky enough to be recognized by Mahiyana whom I met online at SFeraKORon. It was so cool to meet her in person too (even if only for a brief moment).

There were some issues with Pyrkon 2022. The biggest one – extremely long (600-700 metres) queue for people who bought the tickets online. I was lucky that as a programme participant I didn’t have to wait in line. The problems that affected me me a bit were communication issues. The maps provided were not clear and gophers were not able to help with finding certain places. There were also some minor communication issues. Don’t understand me wrong – those problems were not terrible – just a bit visible from the outside. I had the impression that because of the long break some avoidable mistakes were made. 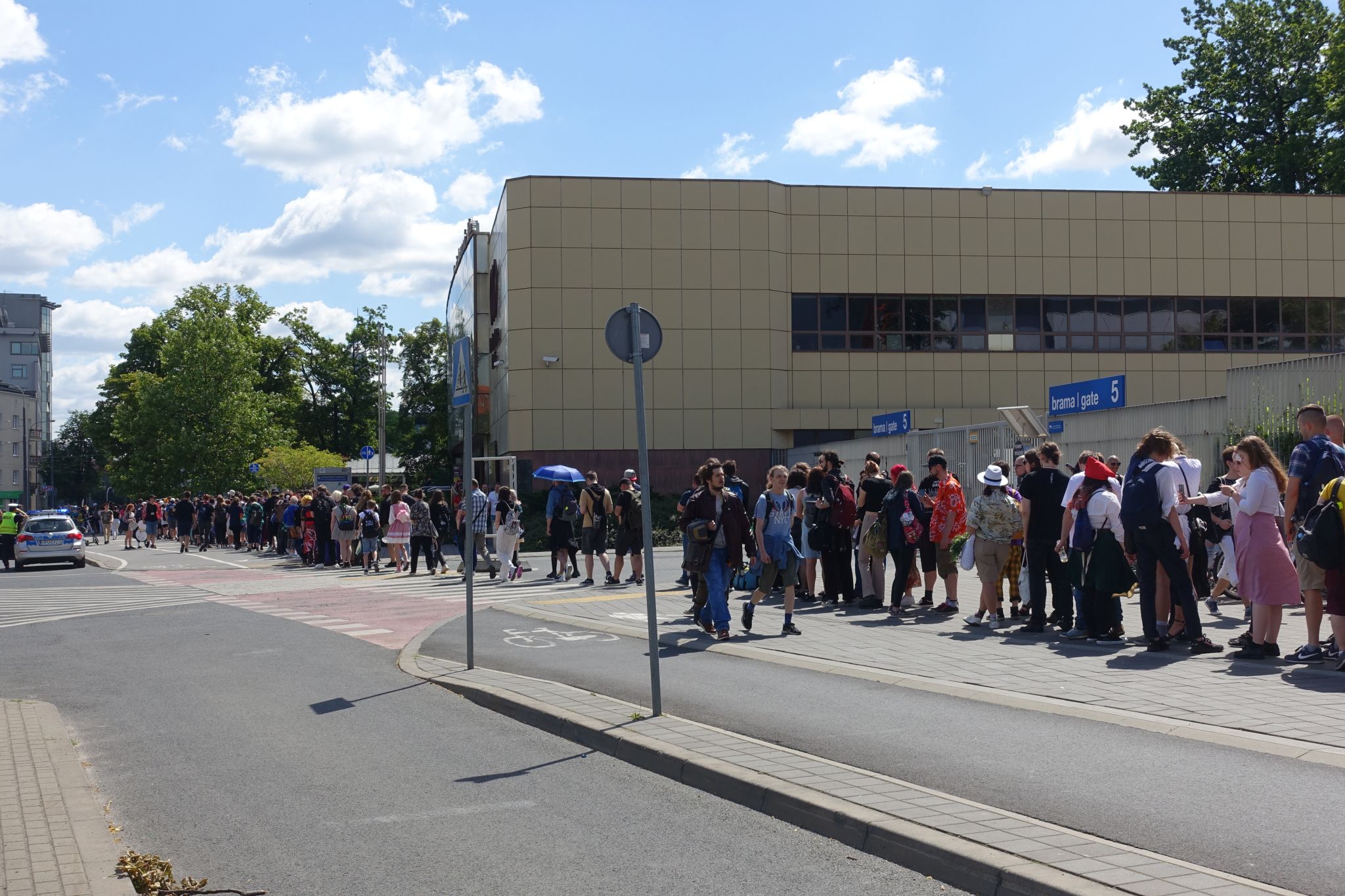 The queue as spotted on Friday morning.

Now I am trying to grasp one more thing. I have the feeling that I enjoyed my time in 2019 more. I saw some similar opinions coming from other attendees too. Yet when I try to pinpoint the cause I am not able to do so. There were some issues (as mentioned above) but there were other problems before too. Maybe the reason is the current state of the world? It is hard to immerse in the convention with the ongoing pandemic and war. I am not sure whether this was the reason but something was not right.

And Some Great Stuff

Not being perfect doesn’t mean that Pyrkon 2022 was bad. I enjoyed my time there. I am happy I got a nice die (which became Pyrkon’s tradition). Should I complain about convention materials I must mention that there was no programme book. An aleternative was a newspaper with basic information but that is not the same. 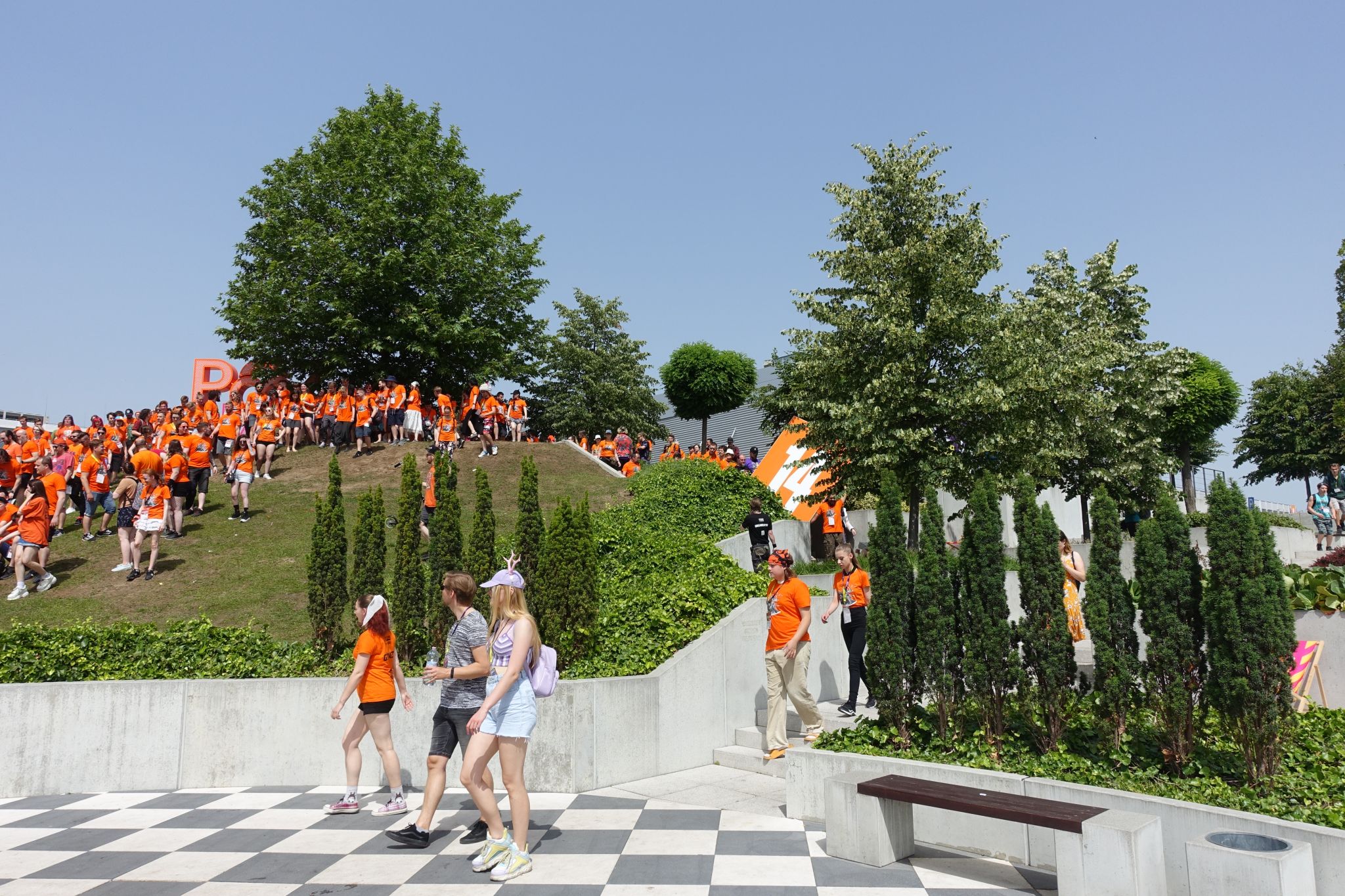 Gopher at the hillside.

I enjoyed some programme items and was enchanted by many guests. Pyrkon did a great job in managing to invite so many great professionals. I regret I didn’t have teh chance to attend the programme items of them all.

There were some great exhibitions in one of the buildings. I especially enjoyed the one that was made to celebrate the fact it was 20th Pyrkon. There were many pictures, a bit of information and some physical artefacts of the history. I gladly read about the convention and took a look at how it changed over the years. Another interesting exhibition was featuring the art of one of the guests – Wojciech Siudmak. I was always impressed by his works and being able to see them here was awesome. Apart from those two there were others – presenting art, collectible figures, Gundam models and so on. 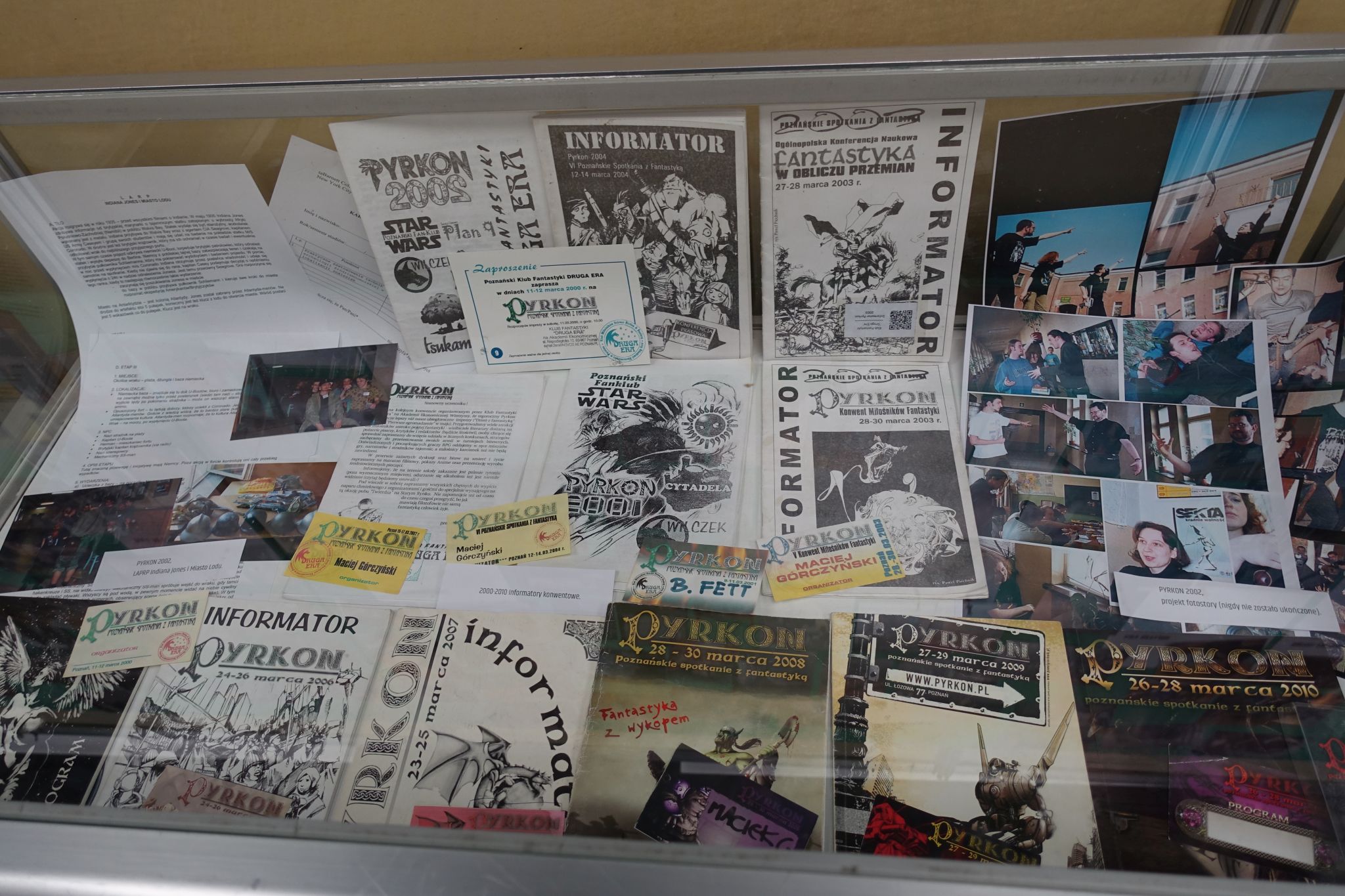 Part of the Pyrkon’s histoy exhibition.

I was also impressed by the great community of gophers Pyrkon has. The team seem to be very devoted. I was nearby when they were taking the group picture. Everyone were in their “official” orange t-shirts. Suddenly the big plate with number 14 (from the venue’s pavilion that was torn down during the pandemic) was brought. Looking at the enthusiastic reaction of everyone was awesome.

I am happy that I attended the convention. There were some issues but overall I had a great time. Possibility to meet so many friends and find new ones was awesome. Enjoying the atmosphere and even buying a bit at dealer’s hall was valuable. I am happy that as a programme participant I helped the event a bit. I know that next year I would gladly attend Pyrkon again and hopefully will be able to help too.

The next posts should be available in 2-3 weeks.