So there is an SFF club in Poland that reached 40 years. A good age and they are still pretty active. Their flagship convention is called Bachanalia Fantastyczne and I decided to join their anniversary celebration! It was a bit tough week for me as on Wednesday night I cam back from a business trip just to travel to the con the next day after work.

Galaxy (not anymore) far far away

I have been to Bachanalia Fantastyczne before in 2015. It was a long way from Kraków. I don’t remember how long exactly but I recall the feeling of it being “at the end of the world”. Now the situation is better as there are direct train connections going for about 5.5 – 6.5 hours. Not so bad. Yet the feeling of travelling far away stayed with me nonetheless.

I’m glad that the convention lasted for four days. Travelling on Friday to arrive late in the evening/at night and leaving on Sunday morning would not be as fun. And although I missed Thursday programme (and evening in a pub) I was at the con since Friday morning. That gave me a solid full two days of conventioning in exchange for twelve hours in the train. 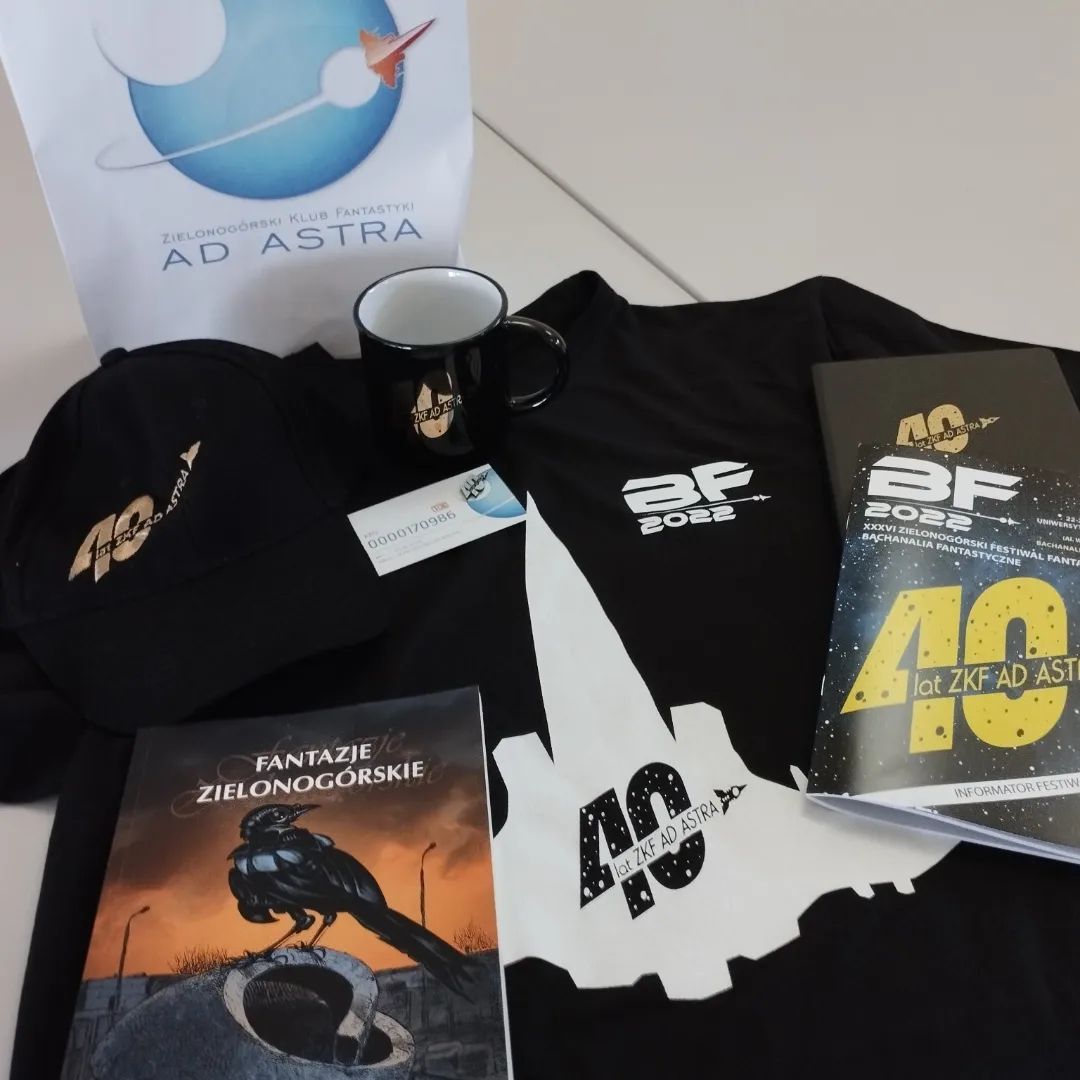 I am not sure whether the amount of produced swag was related to the 40th anniversary or it is usual for them to make as many things. Yet the truth is I decided to buy a golden ticket which came with a lot of stuff. Now I can have a full attire of 40 years of Ad Astra. What I got is: t-shirt, baseball cap, commemorative pin, mug, notebook (paper one of course!), and the twelfth edition of their yearly short story anthology. I love convention swag but now I need to find enough space to keep it at home.

I attended surprisingly large number of programme items. I was at a total of eleven talks and panels over the course of two days. Yet I had to leave two before an end. One was a fascinating panel about the current state of Polish SFF. It lasted for two hours and I needed to leave after seventy or eighty minutes. Still regret I didn’t stay till an end. The other one was a different situation. It was supposed to be abut the currents in Polish SF. When the lecturer came (a bit late) instead of starting the talk he said that he thought we may ask him questions. Within few minutes it changed into “I wrote my first SF novel and…”. I hate leaving programme items before their end. Yet I decided to do it – I was hoping for an interesting analysis of the SF in Poland (and there is plenty to analyse – trust me!). Instead I got some loose conversation about the book I haven’t read. 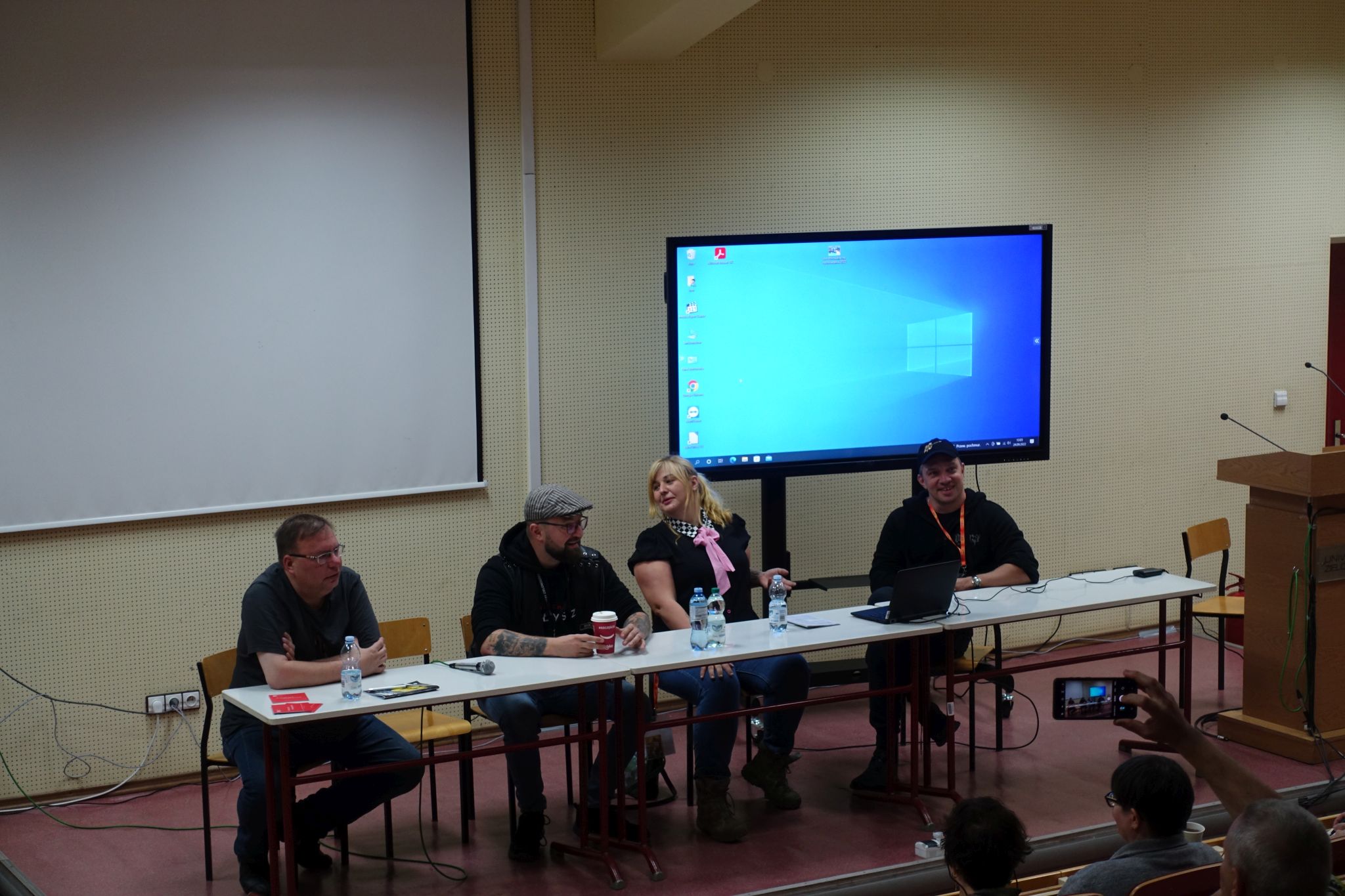 One of the panels I attended. What surpised me a bit is how few people were attending programme.

Yet I don’t want to complaint too much about the programme. Most of the items I attended were pretty interesting. One panel made me angry – one of the panellists had a very strange idea about the current fans/fandom. Still it was a good panel – inspiring food for thought (and conversations in the evening). I missed some of the programme items I was interested in but one cannot be everywhere all the time. I regret that a talk “Make your zine” didn’t have enough people in the audience. It was an interesting item and I would love to see more people listening to it (and it was just presenter, me, and one more fan).

When a club is celebrating an important anniversary it is usually visible at a con. It was not different at Bachanalia Fantastyczne. I saw some pictures presenting exhibition that was at the main square of Zielona Góra (where the club and the con are located). This was even before the con. When I arrived at the conplace I found that the exhibition was moved there so it was even easier for me to see it. In general it was a set of posters describing history of the club, conventions, fanzine, divisions and so on. Of course the text was accompanied by multiple photos. 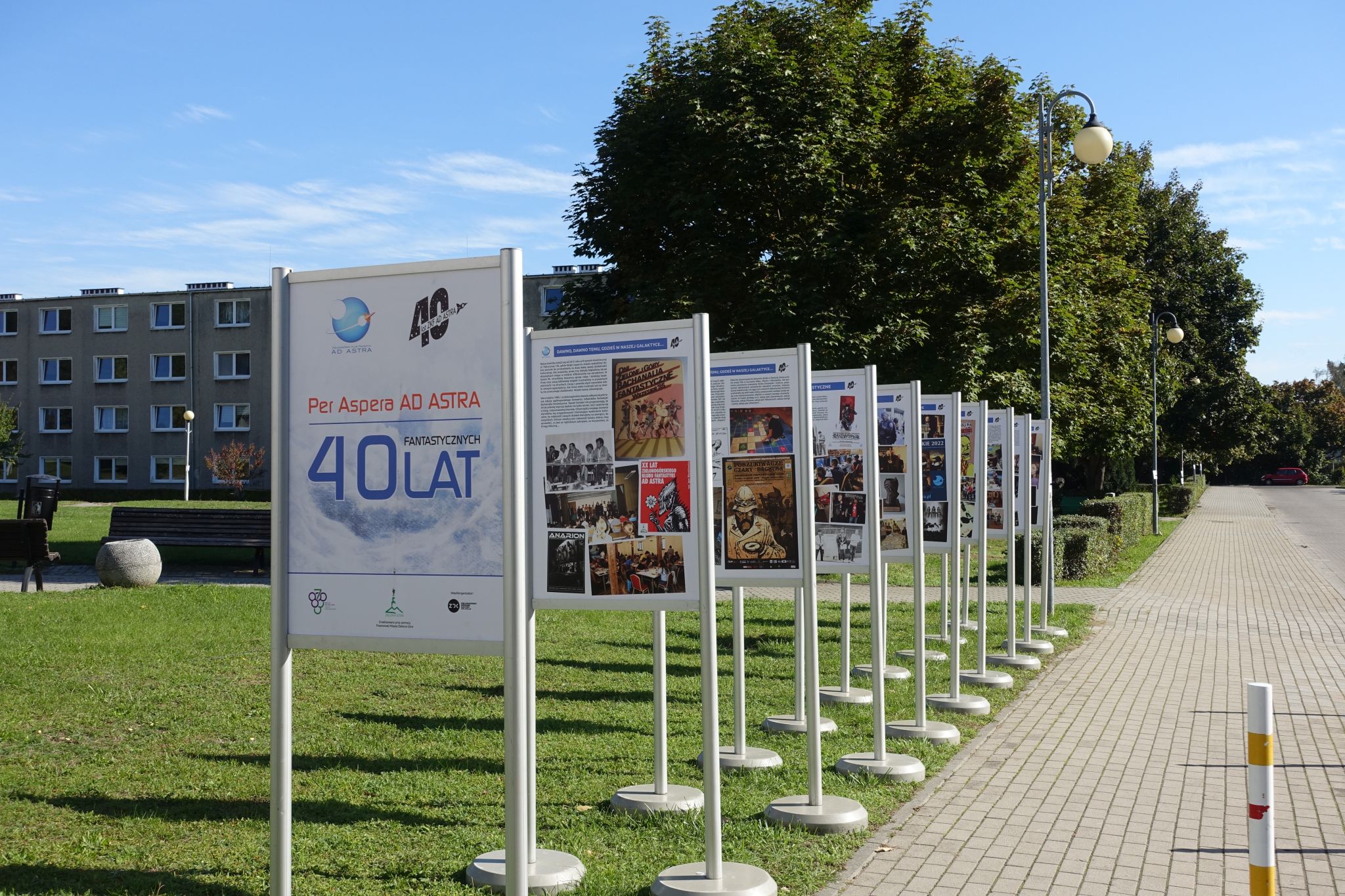 The exhibition in fron of the Bachanalia Fantastyczne venue.

Anniversary is like a birthday and when there is a birthday there must be a cake! (In fact cake is not a must but many people have them). Bachanalia Fantastyczne was not an exception. In fact there were some cakes on both Friday and Saturday night at a convention pub. Friday evening was busy with announcing the awards in the short story competition. After the awards ceremony the club handed out their waistcoats to some of their members. I am not sure how it exactly works but after certain number of years they are handed a branded leather waistcoat. After this happened another Polish club – Druga Era (who are running Pyrkon) game to the stage. They gave a present to Ad Astra for their 40th anniversary, and they shared croissants with everyone in the pub. The next evening – Ad Astra had their birthday cake. I didn’t try it but heard it was good although very sweet. I can only say that it looked nice! 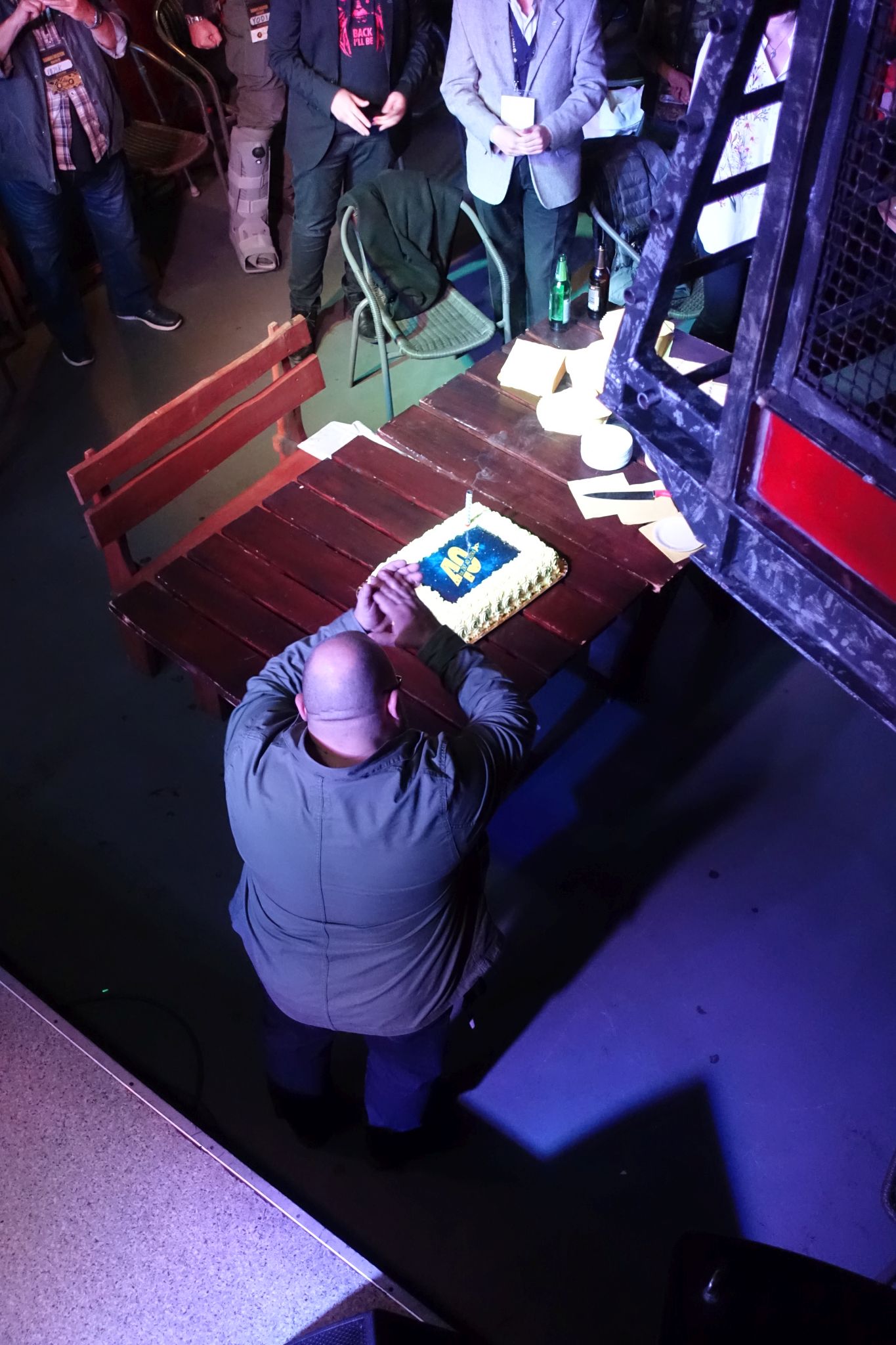 Just before cutting of the birthday cake.

Convention atmosphere is as important (if not more) as programme. And Bachanalia Fantatsyczne do have a spirit. It is clearly visible in how people interact with each other. Fans enjoy the con and enjoy making it happen. It is a great thing to see. What I regret is that somehow I didn’t feel I belong there. And it is not a fault of organizers – I simply think that the “vibe” of the event is different than what I usually feel. This doesn’t mean that I didn’t have a good time! I met my friends, had some great conversations, and spent two evenings in the pub. I also met new people and had some great chats with them. 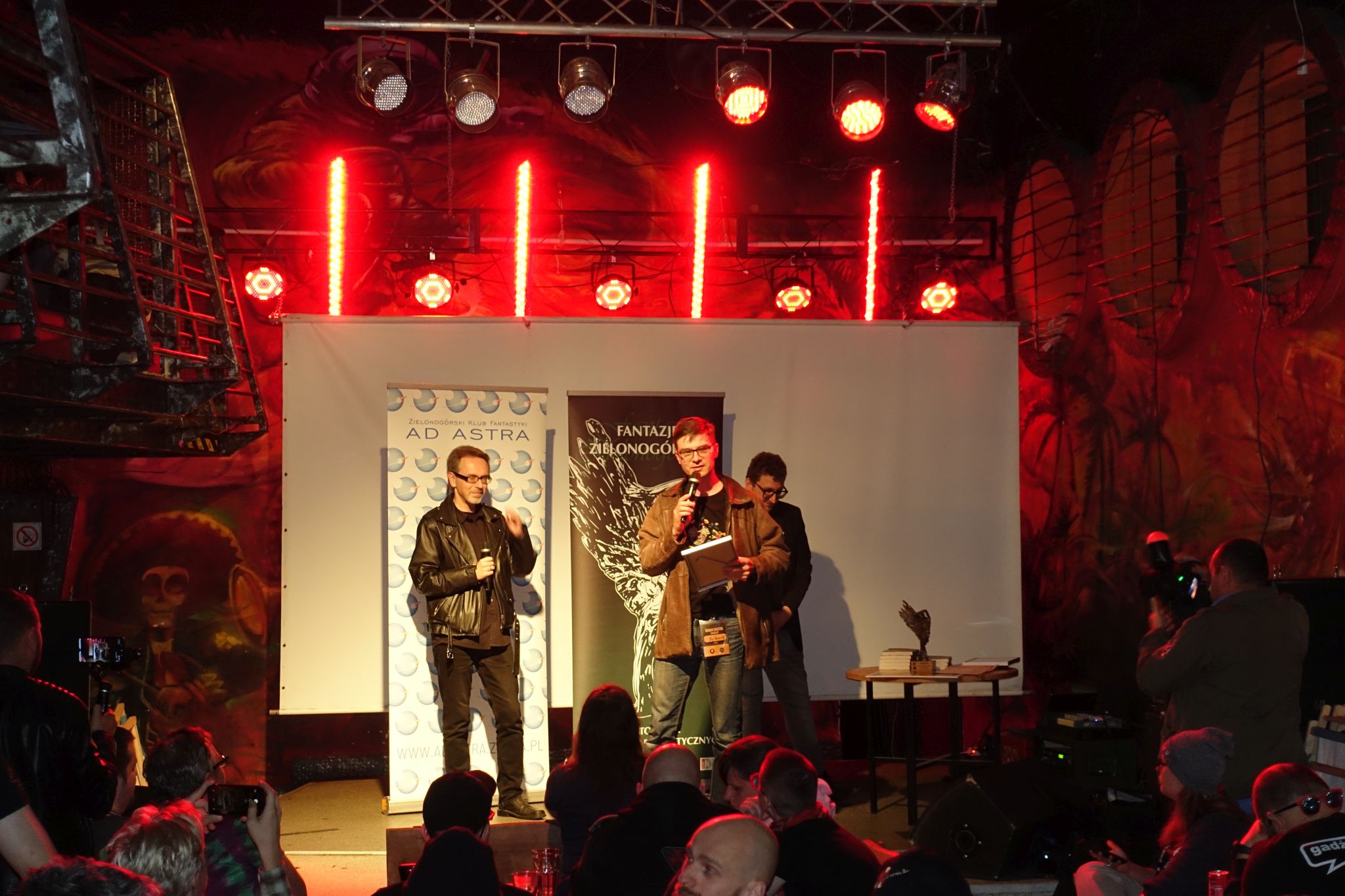 The award ceremony was held in a convention pub.Pyrkon 2022 – a Long Expected Convention

All in all I am happy that I managed to go to the con. I was curious how the 40th anniversary would look like and it was good. Apart from the con I managed to see my friend who lives in Zielona Góra and it was a good meeting after a few years. I won’t be able to attend Bachanalia Fantastyczne every year but for sure I will try to get back every now and then.