For many years I had been thinking that Eurocon is a very important convention. Still for quite long time I had the incorrect impression of why it is so. Its importance is not related to the size of the con – nor to prestige it gives. The strength of Eurocon lies in the very centre of its idea – to share the „fandom way” with fans from other European countries. Although U-con (Eurocon 2017) was quite small, it allowed for the fans to meet and share their interests.

As mentioned, U-con was quite small. It had about 370 attendees. I was slightly surprised by this number as I have seen the team actively promoting on few European conventions including Swecon, Barcelona Eurocon and Pyrkon. I am not sure how promoting was handled in the Germany, but I was expecting a much larger event. Maybe this is related to the fact that convention website was not the best and easiest to navigate, or maybe because in general, conventions of SFCD (Science Fiction Club Deutschland) are not very popular among members of the club. 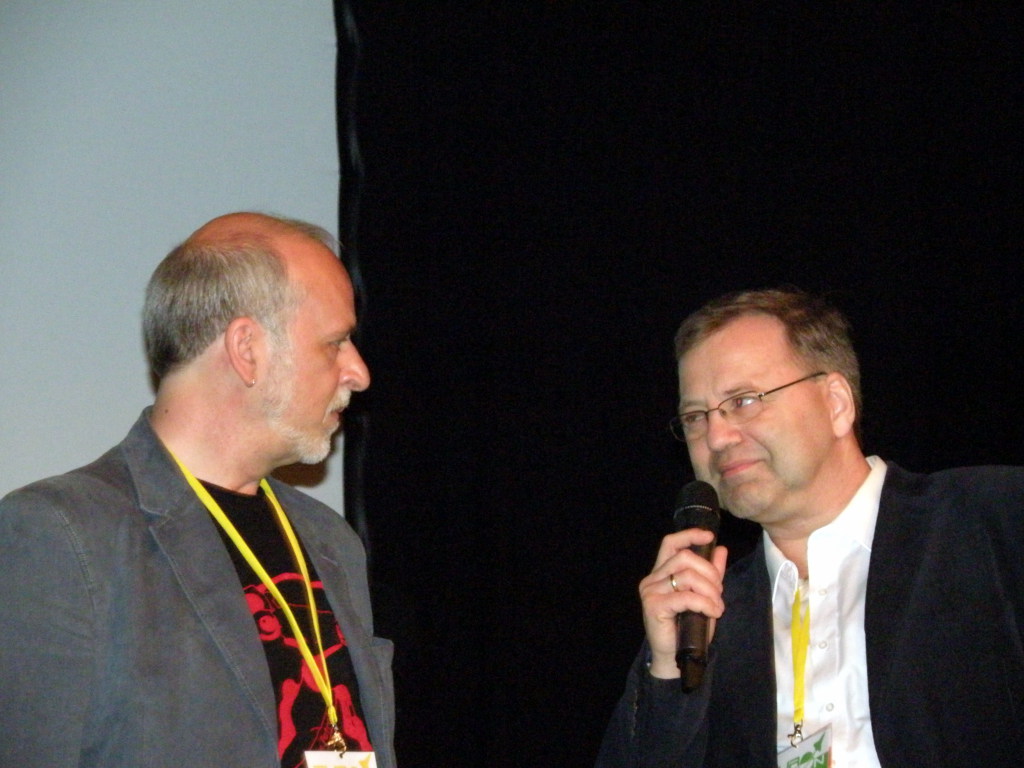 Still the size of the convention is definitely not the most important factor determining its quality. Of course unless event is either extremely small or strongly overcrowded. It is then way more important what was the programme and the atmosphere.

The U-con team made a very good convention when it comes to the atmosphere. They have firstly won my heart with great Lubeck marzipan that they had on their fantables around Europe ;). Every member of the team I was meeting in other countries was very kind and they made me look forward to the convention. It is important that the care was applied to attract potential members since the very first contact they had with the organizing team. 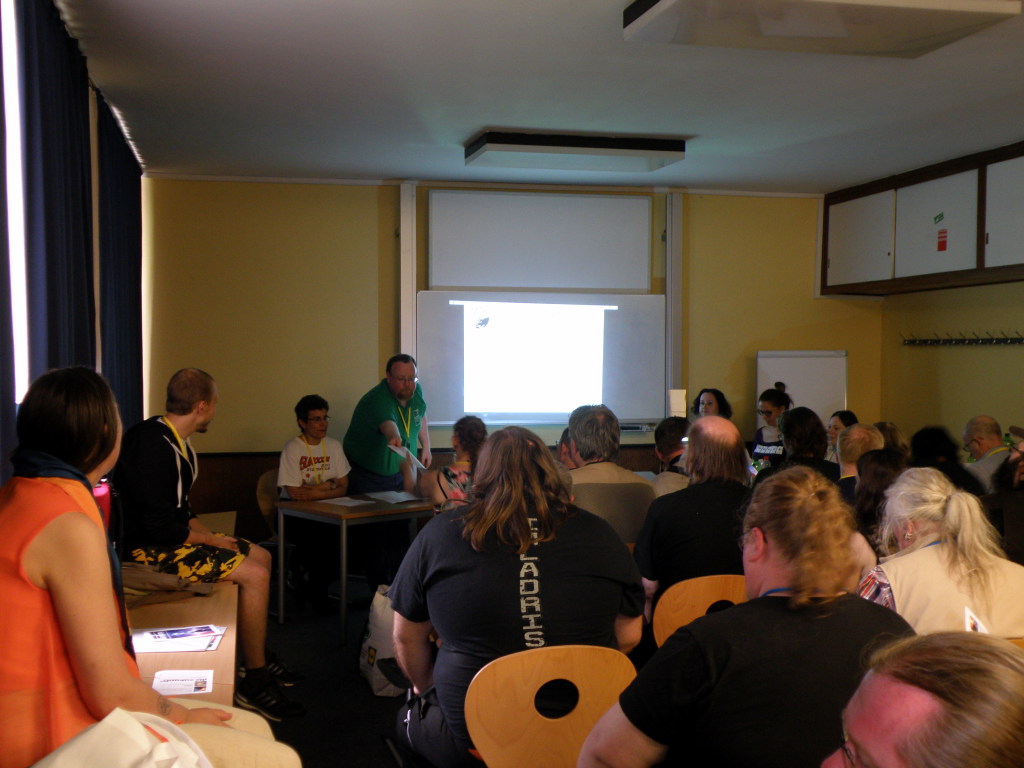 The organized pre-con party was a nice idea. It was held in the restaurant in the centre of Dortmund in the evening before the convention started. Party was a good occasion to meet the people and to start feeling the con atmosphere. Because of this, Eurocon had a feeling of a four day long convention even if it lasted just three days.

I had the pleasure to be invited to participate in one panel and this is how I met Gabriele, who was the head of programme. We had few occasions to speak to each other before U-con and during it and each time she was giving me the feeling that I am really welcome. It was really very nice and I want to thank her for that. 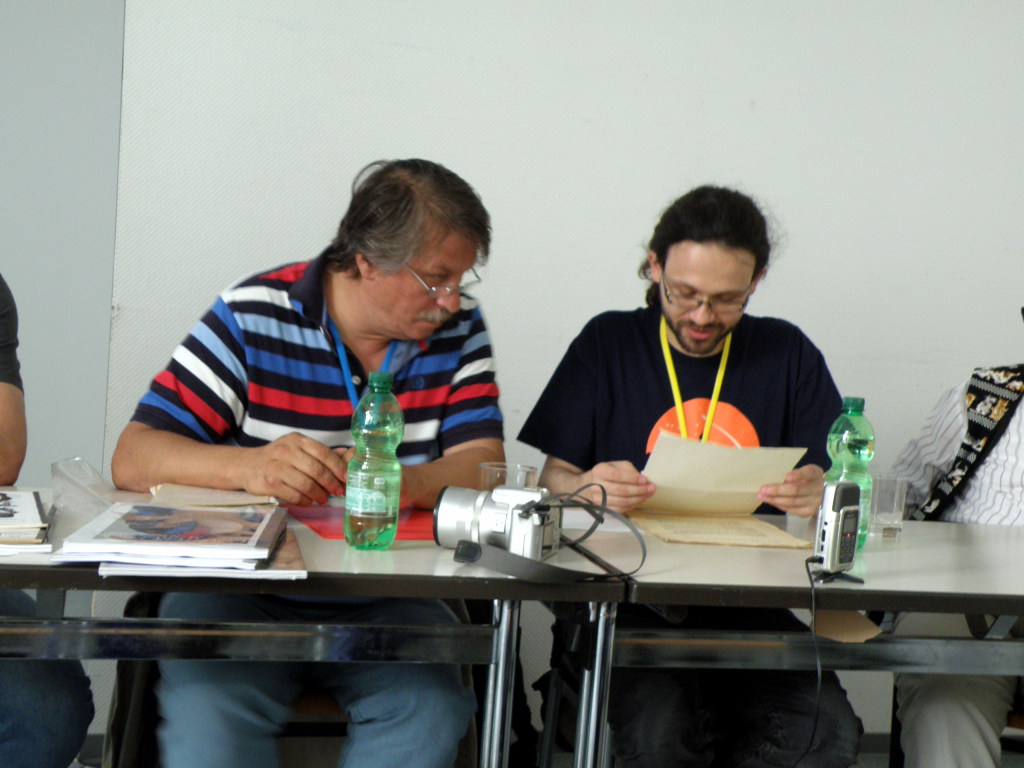 Once again I did not have enough time for programme. I was manning Worldcon 75 fantable, and I also helped a little bit on Dublin in 2019 bid table. On top of that I wanted to participate in ESFS Business Meetings. If I would sum this all up it comes out I didn’t have too much time to visit programme rooms.

One of the first impressions I had about the programme was that it was shortlasting. Standard lectures and panels were finishing at 19:00 on both Friday and Saturday. Later on there was a concert between 20:00 and 22:00. I am rather used to having programme items running for few hours longer. Still this solution allowed me to eat dinner on Friday evening and spend a lot of time talking on Saturday so I cannot complain.

Opening ceremony was a nice event with some jokes and very good translation between German and English. There were interpreters who were helping on few programme items and their skill in translation and ability to remember even longer statements is worth mentioning. Closing ceremony was much simpler but it is good that the chair found time to thank everyone who was involved in running this Eurocon. It was also the closing ceremony when Wolf von Witting has given Counterclock award for fans involved in European fandom. It was awarded for the first time and Wolf decided to mark few organizers who were involved in both this years and 1999 Dortmund Eurocons. 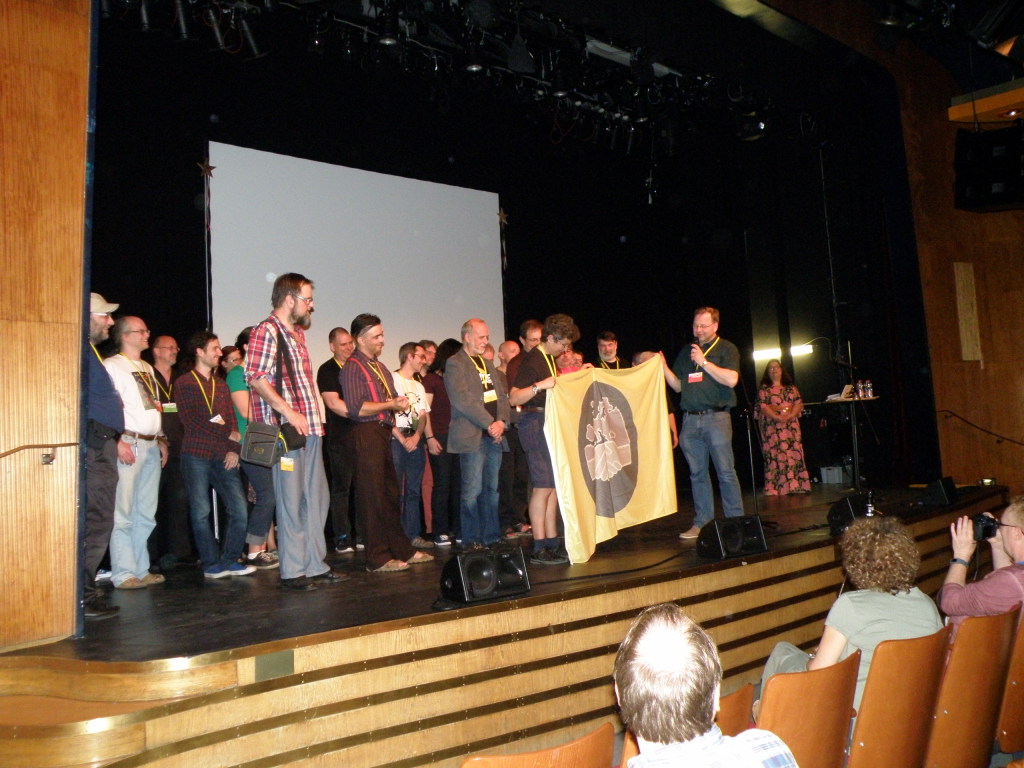 Closing ceremony – ESFS flag is being returned to president of ESFS

The evening concert on Friday was called A night to remember. I was a little bit sceptical if it would be really a night I will remember for long, but I was wrong. There were few artists presenting their pieces. We were able to hear people playing guitar and theremin, reciting poetry or “interpreting alien poetry”. But the best pieces of this evening were songs played by Dimitra Fleissner on her harp and the ATS show by Gata. Music and dance were quite different but they both left me astonished and I will be looking forward for another possibility to see one of these artists performing. 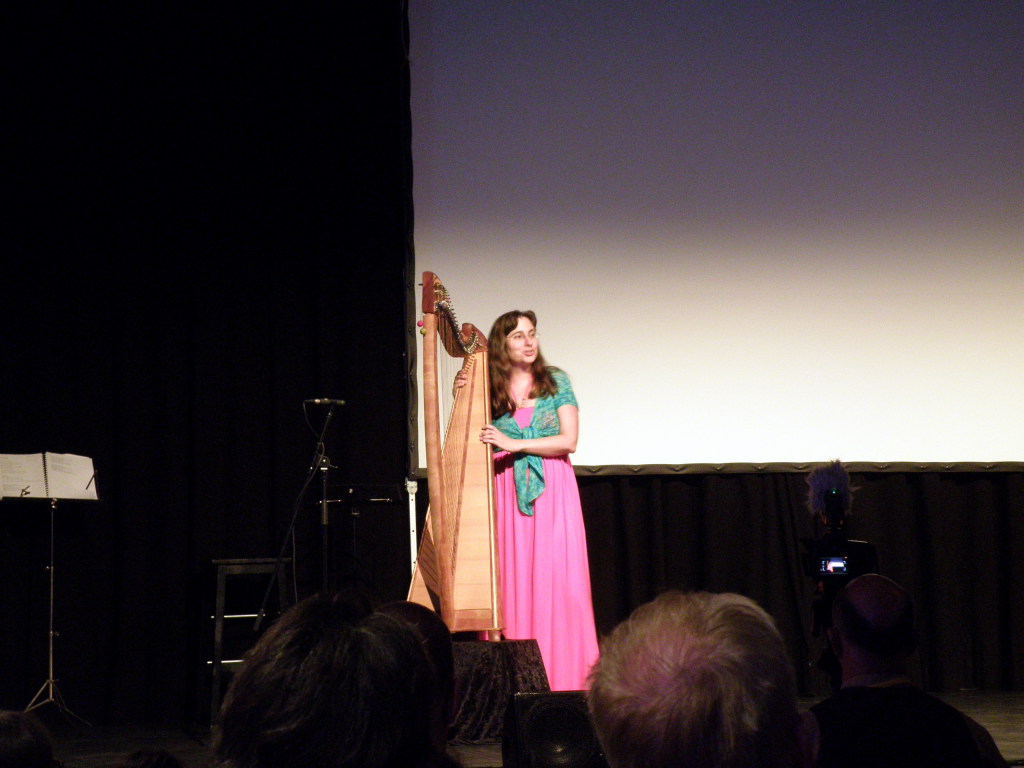 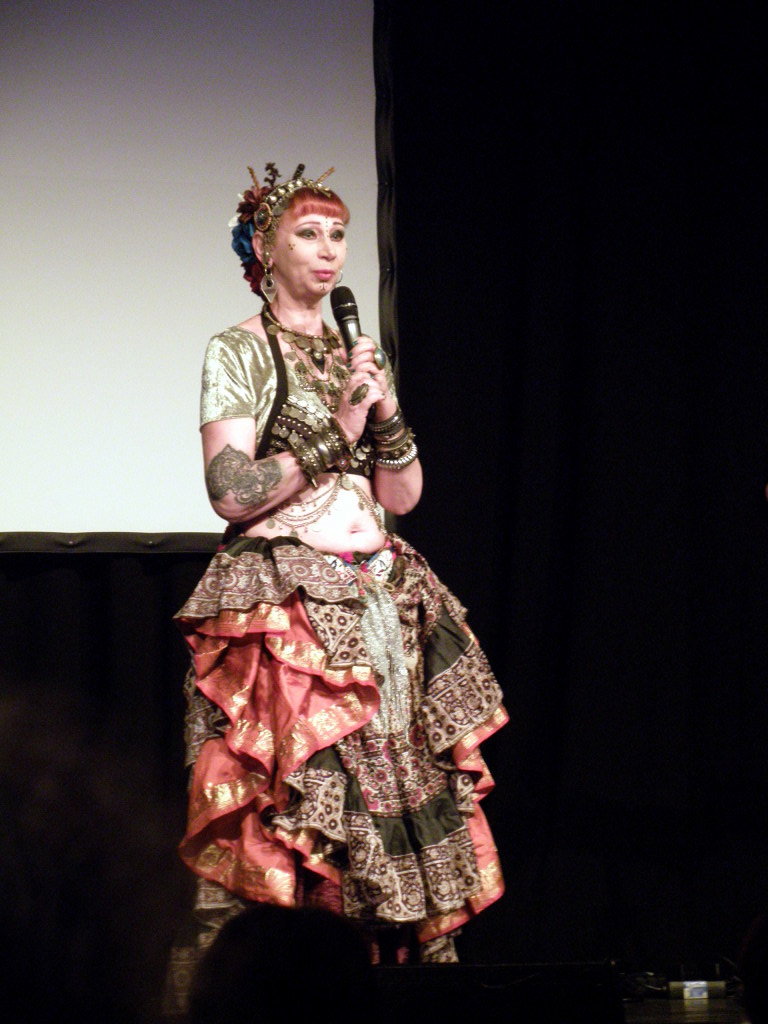 As for the rest of programme, I was able to find some time for few items. One of them being TAFF presentation by Nina Horvath (very interesting) and some science lectures. On top of that I was able to visit two items with convention GoHs. 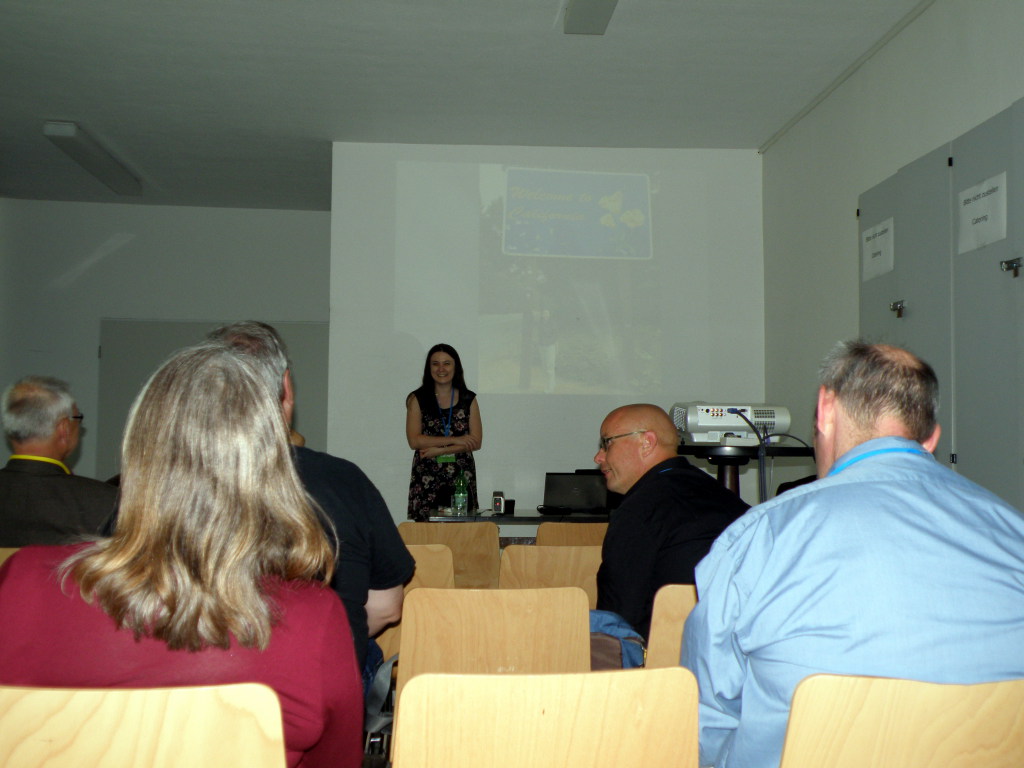 Nina talking about her TAFF experience

Speaking about GoHs I am really glad that U-con concom made such decision. It was really interesting to listen what they had to say during programme items and it was even more interesting to chat with Autun Purser and Dave Hutchinson. I also think that all GoHs have really participated in the convention what is quite important. 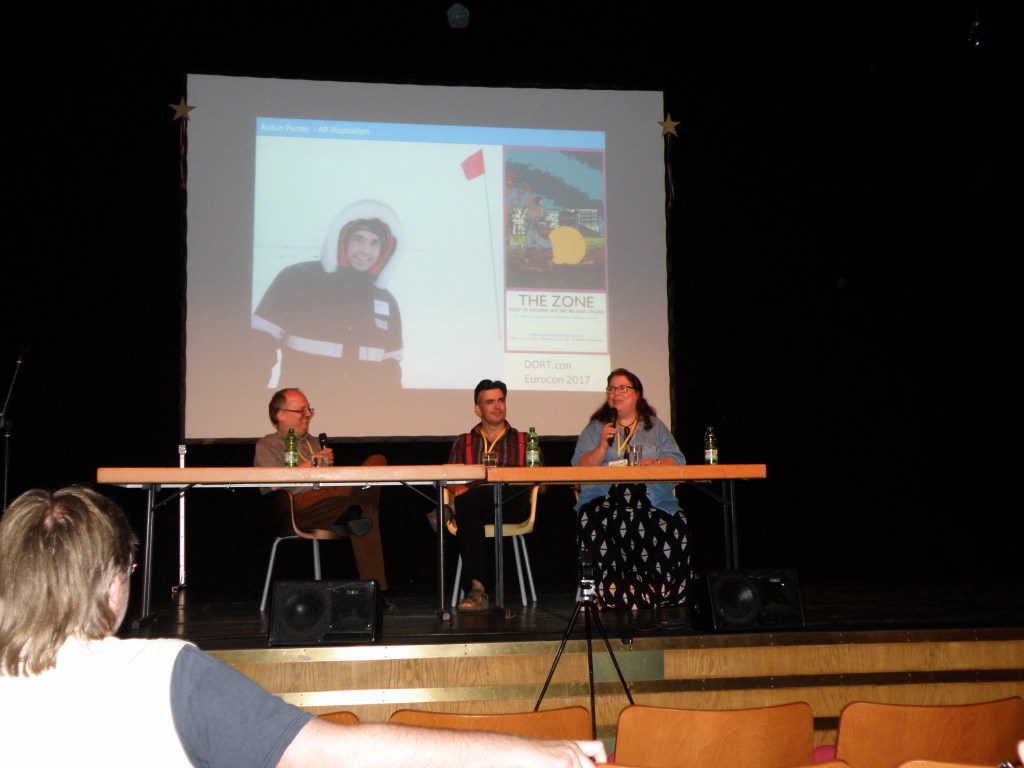 There was no official convention hotel and I was expecting to be the only one at the one I have chosen. But when I arrived, it became clear that a lot of people have chosen the same venue. Thanks to that, each breakfast was changed into an hour long conversation about fandom matters. Usually I am not staying at official con hotels and it was a very nice change. 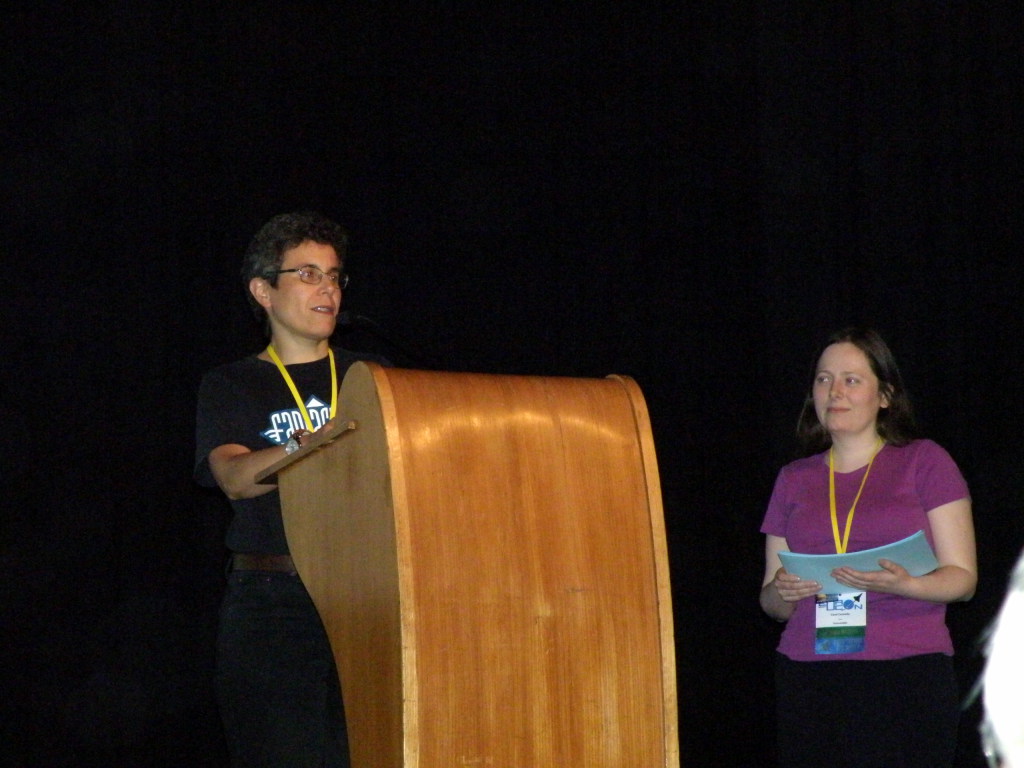 It was my first encounter with German convention. I can see some differences in how fandoms in Germany and Poland work. Thanks to the Andromeda SFMagazin 155 that was available for free during U-con, I will be able to read a little bit more about German fandom and compare it to my real life experience.

All in all Eurocon in Dortmund was nice. It was not my favorite Eurocon but there were few moments I will remember and cherish deep in my fandom heart. Now I am looking forward to Eurocon in Amiens next year and in Belfast in 2019. 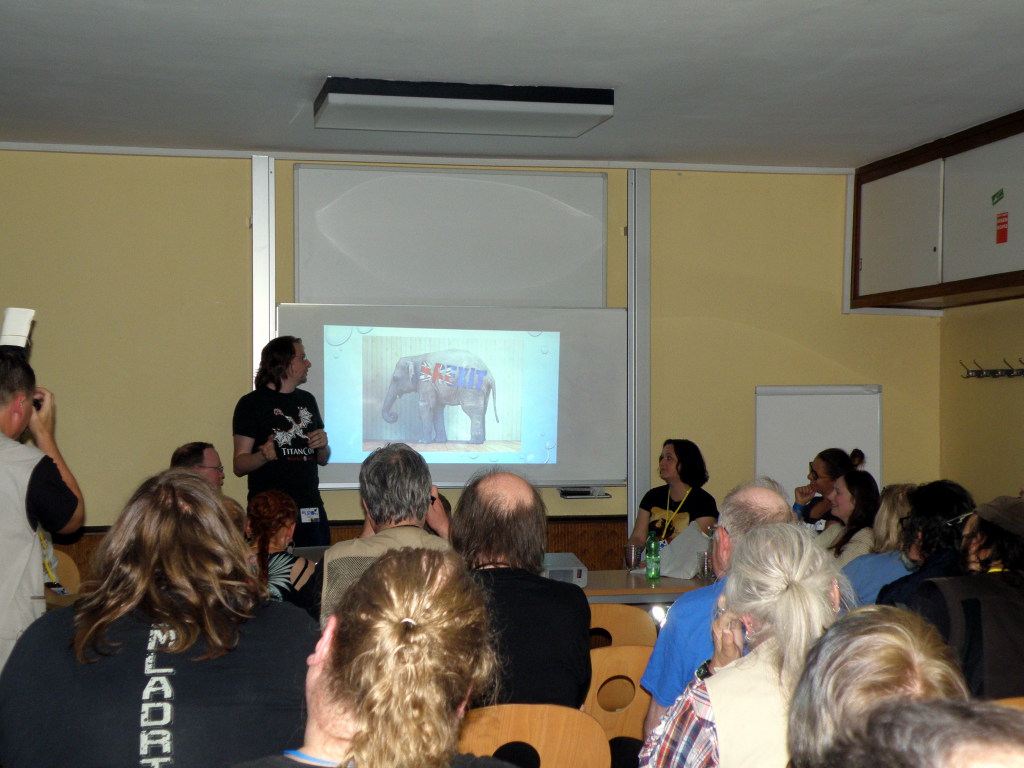 Phil mentioning Brexit as potential issue for Eurocon 2019 in Belfast

The next post will treat about Warsaw Comic Con will be published on 10th July.