The majority of Polish conventions are made by fans for fans and they aren’t run for profit. Still, with fandom being relatively big, it was only a matter of time when commercial cons would appear. Warsaw Comic Con that took place in the first four days of June was the first to happen, but not the first that had been planned.

Europe Comic Con was announced last year and was supposed to take place in 2016 in Kielce. Unfortunately concom made some mistakes and the convention was cancelled, then moved to 2017, and then cancelled altogether. Quite soon after that, a German company decided to run Comic Con Warszawa in the second week of June 2017, and not a long time afterwards, Ptak Warsaw Expo announced their plans to organize Warsaw Comic Con in the first weekend of June. I don’t want to comment on the decision of the organizers of the latter to choose a date one week before the convention that was announced before.

People were constantly mixing the two Comic Cons – Warsaw Comic Con and Comic Con Warszawa. Both were supposed to take place in June in Warsaw (please read the information below) and both were promising a lot. Their fanpages had different colouring on facebook and thus Comic Con Warszawa, the one organized by a German company, was called „the yellow one” and the event run by Ptak Warsaw Expo became „the blue one”. 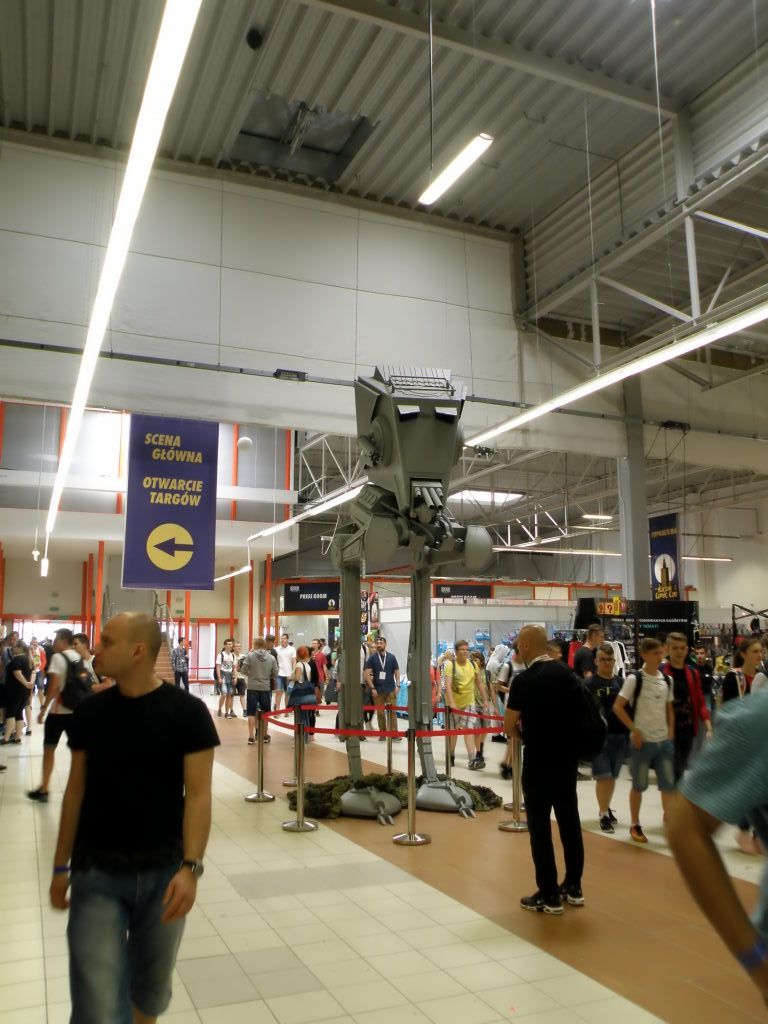 Interior of one of the halls

The Yellow Comic Con did not start too well. News on their fanpage seemed to be translated by Google translate and people were not so eager to attend it. Although content for the Blue one was prepared in Polish, a lot of us were also sceptical. Their fanpage was growing very slowly and at the same time they said they are the best and the biggest convention in Poland. This was definitely quite a bold statement, considering it was the first occurrence of Comic Con and we already have Pyrkon that has over 40 000 members. Still, a person from organization stated that they have organized 700 coaches to bring children from schools in multiple locations in Poland.

In the end, less than a month before the Yellow one, it was announced that Yellow and Blue Comic Cons are joining forces and therefore the Yellow one will be cancelled, but the Blue one will accept their tickets. To spice things up, the news was first demented by the fanpage of the Blue Comic Con, but later on the comment was removed and they confirmed the fact that they would accept tickets, but not a word was said about joining forces. What ultimately happened was that out of the three announced comic cons only one took place… 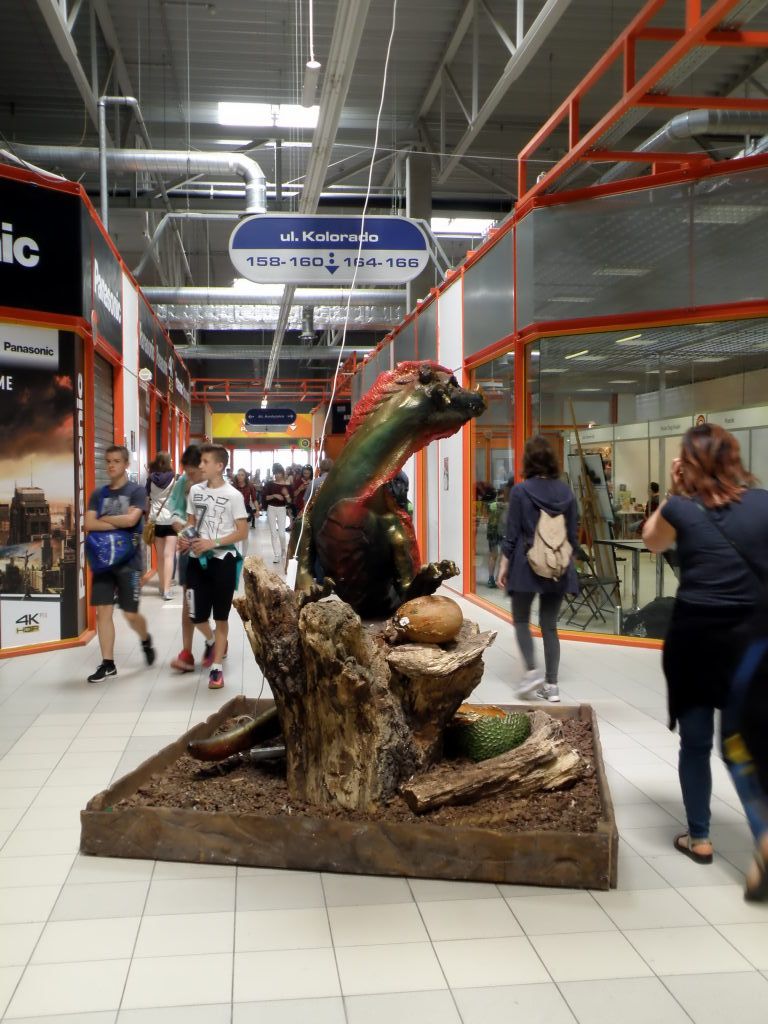 Dragon in one of the halls

My decision to go to a Comic Con

From the very first moment Comic Con in Poland was announced, I knew I would not go there. I am not really interested in TV series nor too strongly in comics. I also love fan-run conventions but am not into for profit events. Still, when I started this blog, I decided it might be good to go, if only to describe what the first such event looked like. Unfortunately, the chosen weekend was not a good time for me and I was able to come only for one day, so my report does not cover the whole convention. 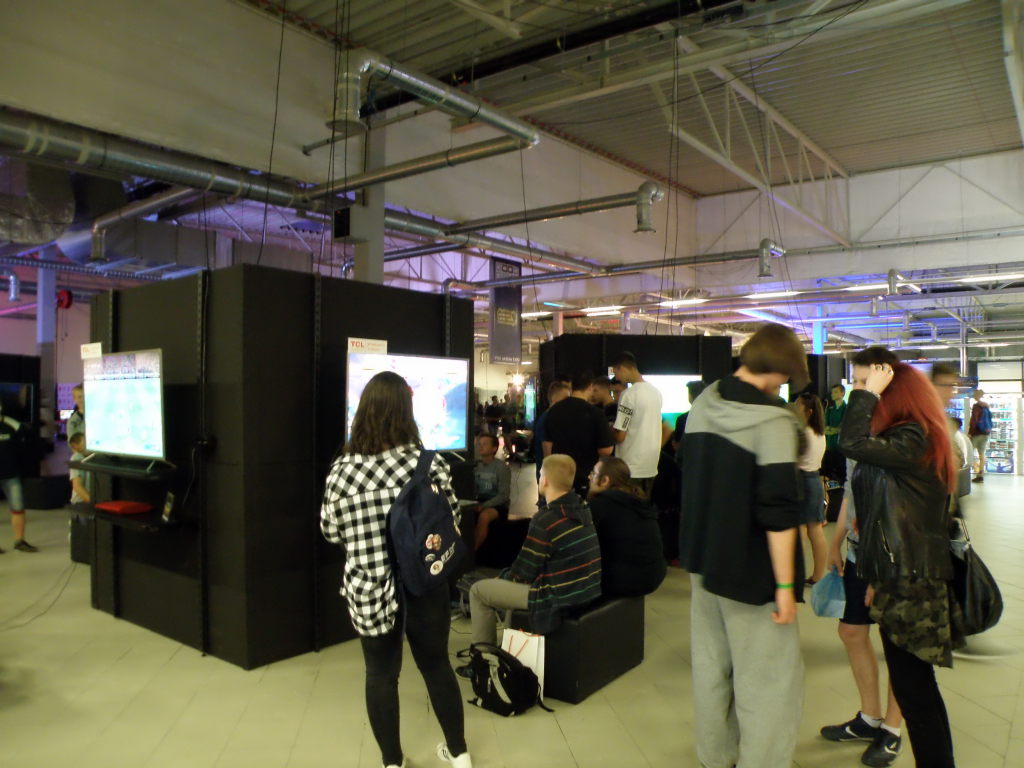 As I mentioned before, the organizers wanted to have “hype” around their event. In their ads, they used statements that were rather not true. They were also accused by some fans of trying to suggest they are somehow related to SDCC. 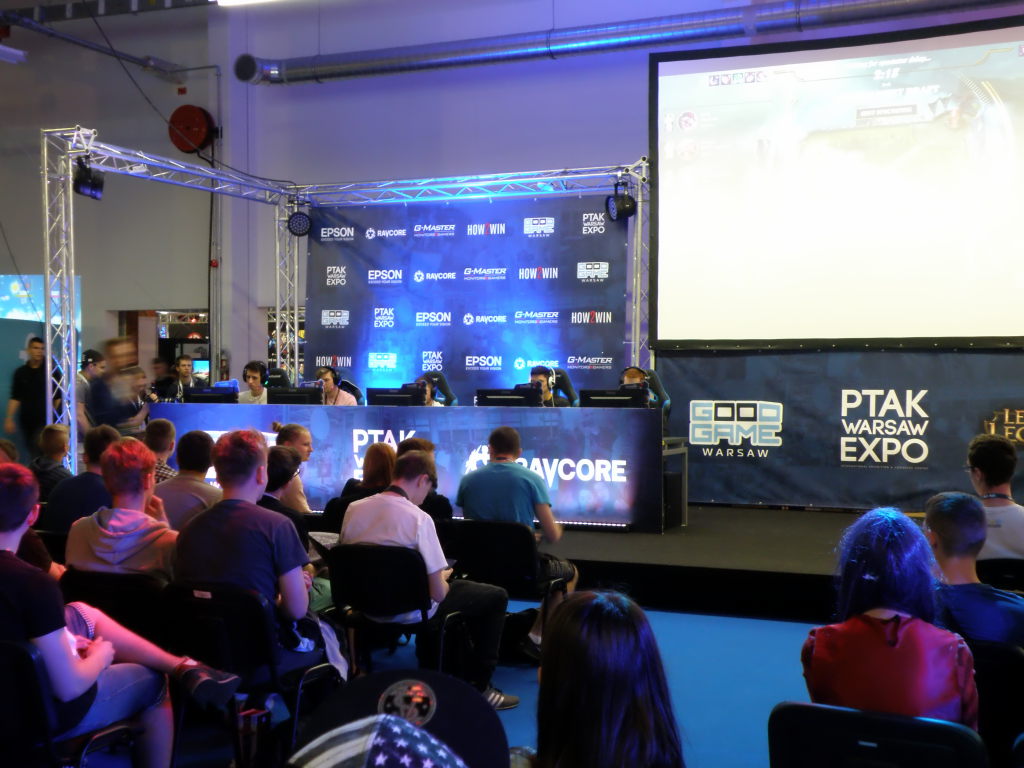 Stage with players. Logo of Good Game is visible

I am not sure how the selling of tickets went, but for some reason Warsaw Comic Con gave away a lot of tickets for free. Next to their statement of arranging 700 school coaches, they were quite willing to give out tickets for Thursday and Friday for free. In fact I got mine on Pyrkon and I have seen the team giving it out in quite large quantities.

Getting to Warsaw Comic Con

It is important to mention that despite of its name Warsaw Comic Con did not take place in Warsaw. Convention was held in a building of Ptak Warsaw Expo in Nadarzyn – a small village 22 km away from the Warsaw city center. It was possible to get there by public transport but it would take over an hour and the buses were going there only once per hour… Fortunately, the team announced that there will be free buses taking people from three stops in Warsaw directly to the convention. It was scheduled to run once per hour on Thursday and Friday and every 15 minutes on Saturday and Sunday. I was surprised by the fact that it was supposed to run once in an hour for an event that was aiming to host over 40 000 people, but on the Friday morning I went to the third stop anyway. 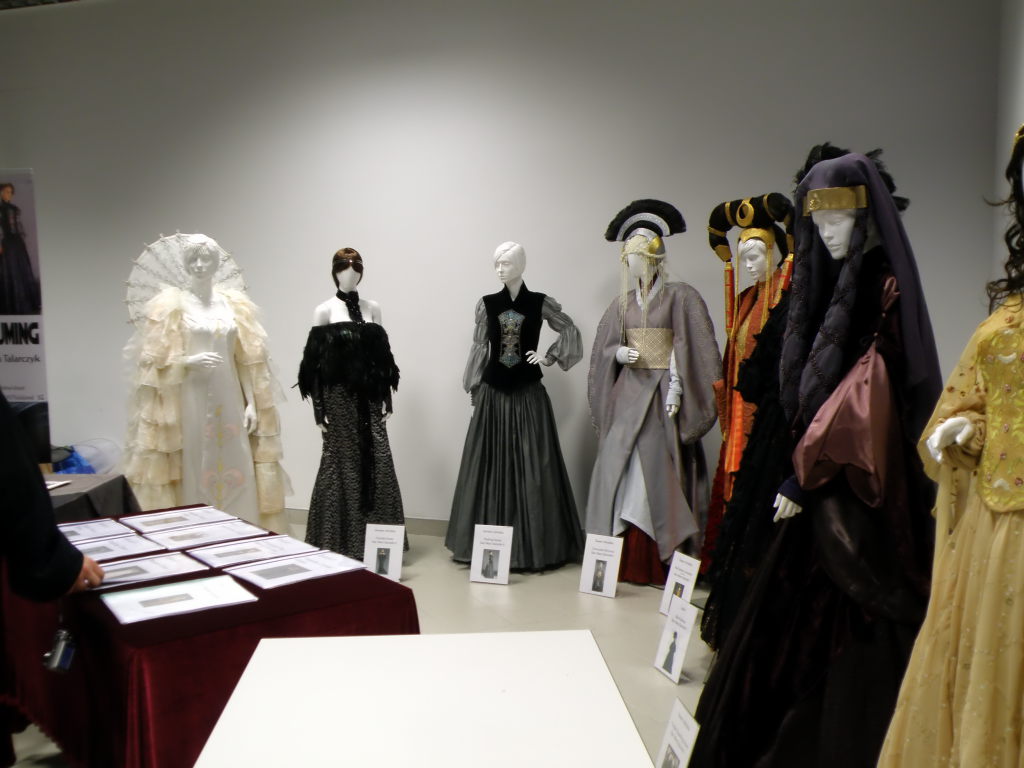 One of the exhibitions

When I saw the bus coming I was really happy despite it being slightly late. I was definitely unhappy when it didn’t stop as people inside it were already squeezed way over the limit of the bus. I made a quick decision to try with the next bus on its first stop. When I arrived, there was already a large crowd of people waiting. They mentioned that the organizers announced that bus will be running every 30 minutes. Finally the next bus came and I barely got inside. Again, we did not stop on any other stop as the doors to the bus barely closed. I could rant about the journey all day long, but I will stop at saying that it was all but comfortable.

The convention venue was really huge and built to host expo events, so there was plenty of space for dealers. I saw a lot of companies that were well known to me as well as few I didn’t know. The second big hall housed dealers/presenters from the video gaming industry. According to the map I received upon entrance, there should have been three halls, but it seemed that the third one was closed… I spoke to a few of my friends who were dealers and they were not really satisfied when it comes to people buying stuff. I can only hope that it went better on Saturday and Sunday. 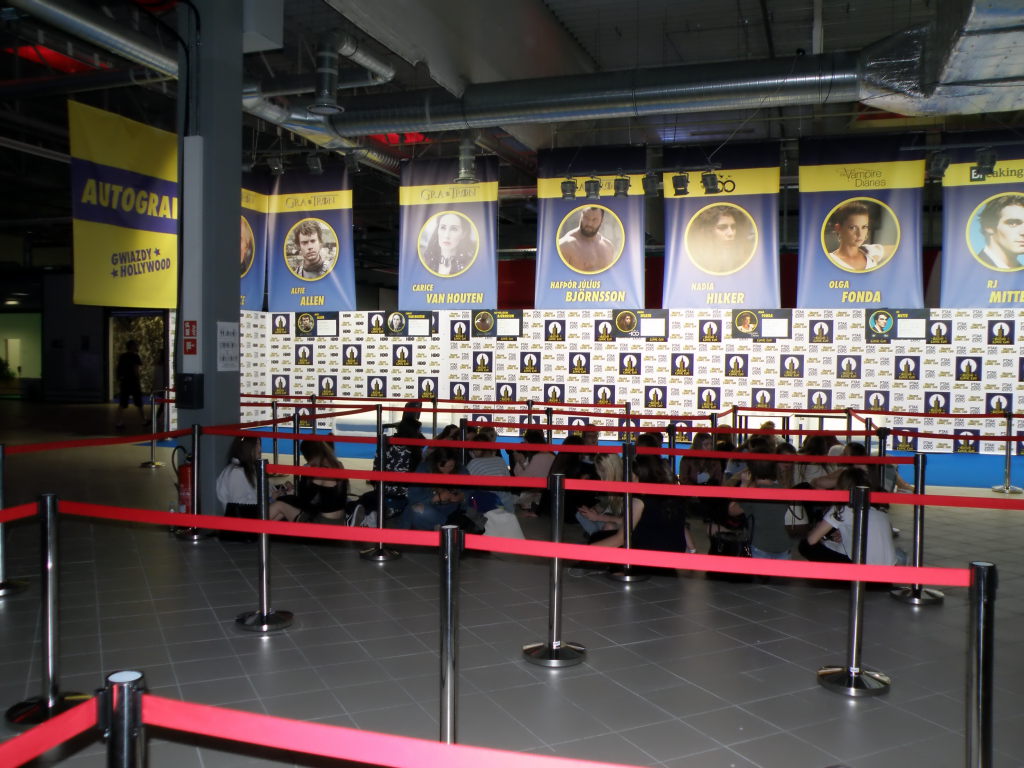 Fans waiting in queue to get Dawid Kwiatkowski’s autograph

The halls were filled not only by dealers and visitors but there were also two or three stages, some space left for the queue for autographs, and a scene where some e-sport players were having a tournament, there were also exhibitions (including the throne from GoT, where you were able to take a picture of yourself) and so on.

There was a space with foodtrucks between the halls, offering a variety of meals, including chocolate kebab. The weather was nice so it turned out that I spent some time there with my friends. 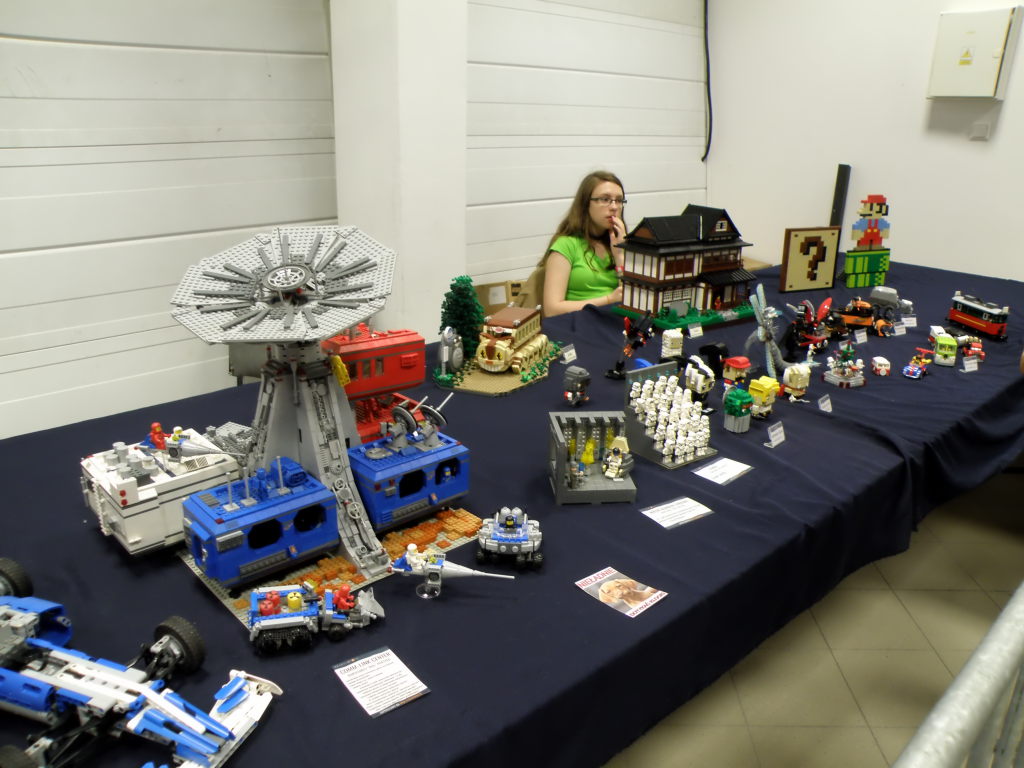 In the halls there were few programme rooms. The main disadvantage was lack of doors. Because of that, the noise from the dealers’ hall (and from other programme rooms) was coming in. It would not be such a big problem if a proper sound system was in place in all the rooms. This was unfortunately not the case. In some of them, the sound carried very well. And in others… Well in the others it was best if you could sit in the front row and do your best to listen to the speaker. 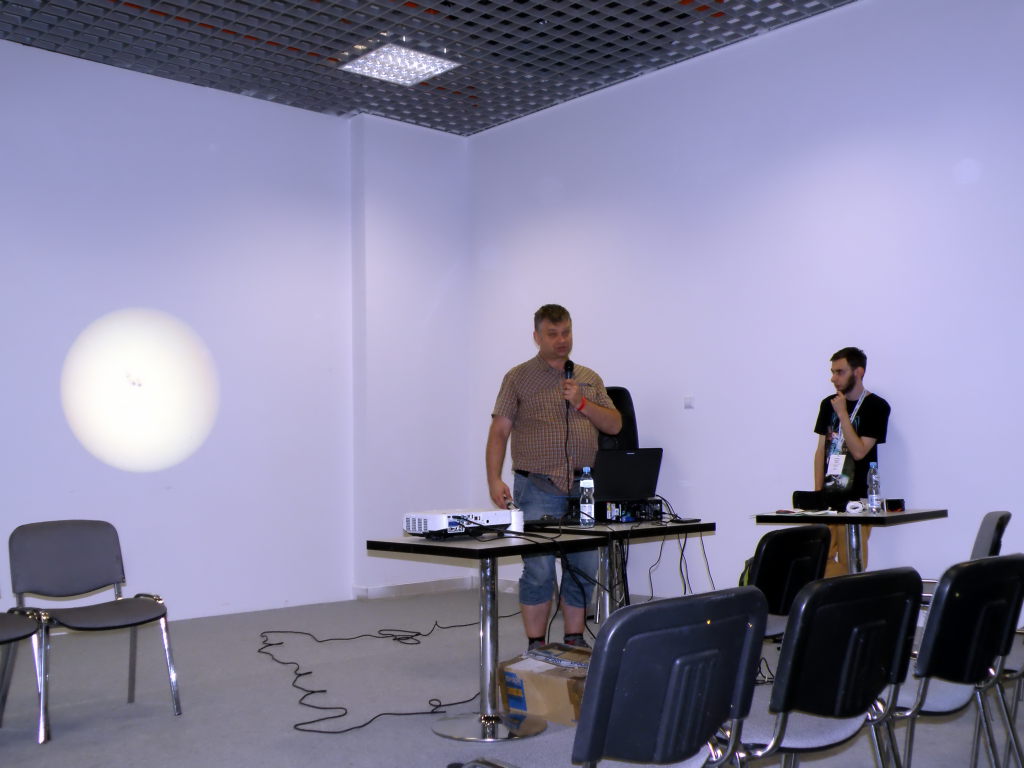 Programme item where I was barely able to hear the speaker

I was interested in a few items that took place in the Pop culture room and in the science room. I really regret that I did not attend all of them but as my time was limited and I really wanted to spend part of it talking to friends I had to choose something. A part of the programme was held on the stages. Out of all events held there, I only saw the alternative fashion show, which was quite nice.

The list of invited guests included a few actors known from popular TV series like Carice van Houten playing Melisandre in GoT or RJ Mite who played in Breaking Bad. I also observed the autograph session scheduled for Dawid Kwiatkowski – a Polish pop singer. Charles Dance was one of the best known actors who was to attend the convention. On the third day of the convention (Dance’s appearance was scheduled for the fourth day) it was announced that he would not make it. There were also some Polish SF/F writers invited, including Marcin Przybyłek, Robert Szmidt, Andrzej Pilipiuk, and others. 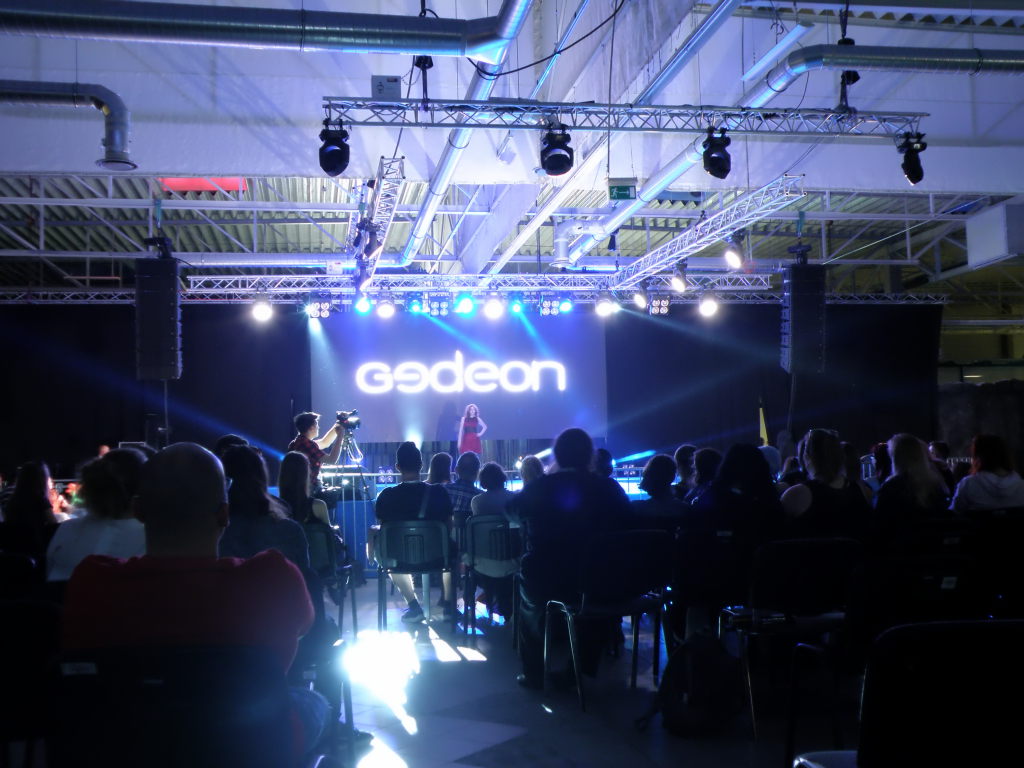 The atmosphere of the Comic Con

Unfortunately, I did not feel great during the one day I spent at Warsaw Comic Con. I felt a little bit lost and out of place. I cannot blame the organizers for that – maybe it was just me and my expectations for CC. Still, me and some of my friends had the feeling that this is not the type of event for us.

There were a lot of people who seemed happy. I believe that Warsaw Comic Con was the first convention for many of them and I hope they enjoyed it. I do hope some of them will take to visiting fan-run events. For sure some of the visitors will come again, as the next edition of Warsaw Comic Con is scheduled for this fall – late in November. 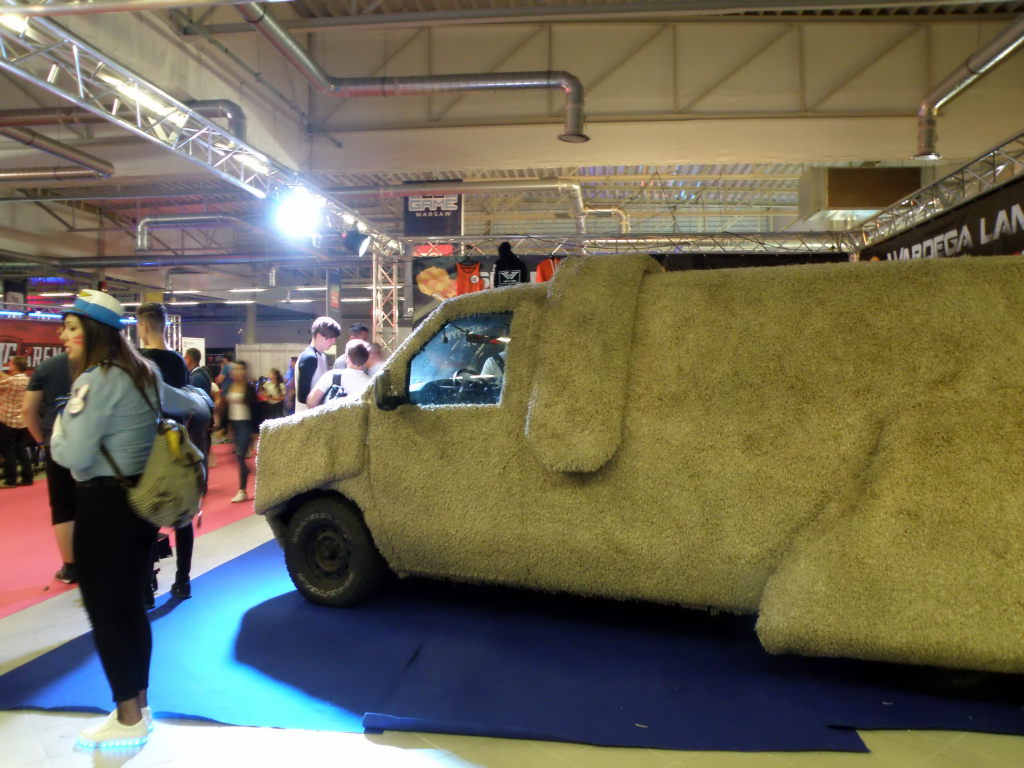 One of the halls

Most probably I will not visit the second Warsaw Comic Con but I hope it will be better organized next time. I think that the first Polish Comic Con wasn’t good, but it wasn’t a total disaster either. In my opinion, there is a place for a commercial event like Comic Con on the Polish con scene and I’d like to wish all pop culture fan an event that will offer them an opportunity to enjoy their hobby.

The next post will treat about Medalikon will be published on 19th July.