Oh dear, Imladris 2019 was my 200th convention (this number deserves another post that will follow relatively soon). I had such a great time and I am extremely happy about the con. It was magical in many ways it was definitely one of my best cons this year.

I will start with the interesting innovation that was introduced this year – the convention game. One had to register via internet and then use the QR code scanner to scan codes that were everywhere. Each member had one QR code on their badge (a great way to start the conversation), there were codes at given places (e.g. dealers stands and in social media channels) and lastly from time to time one time codes were left around the venue. 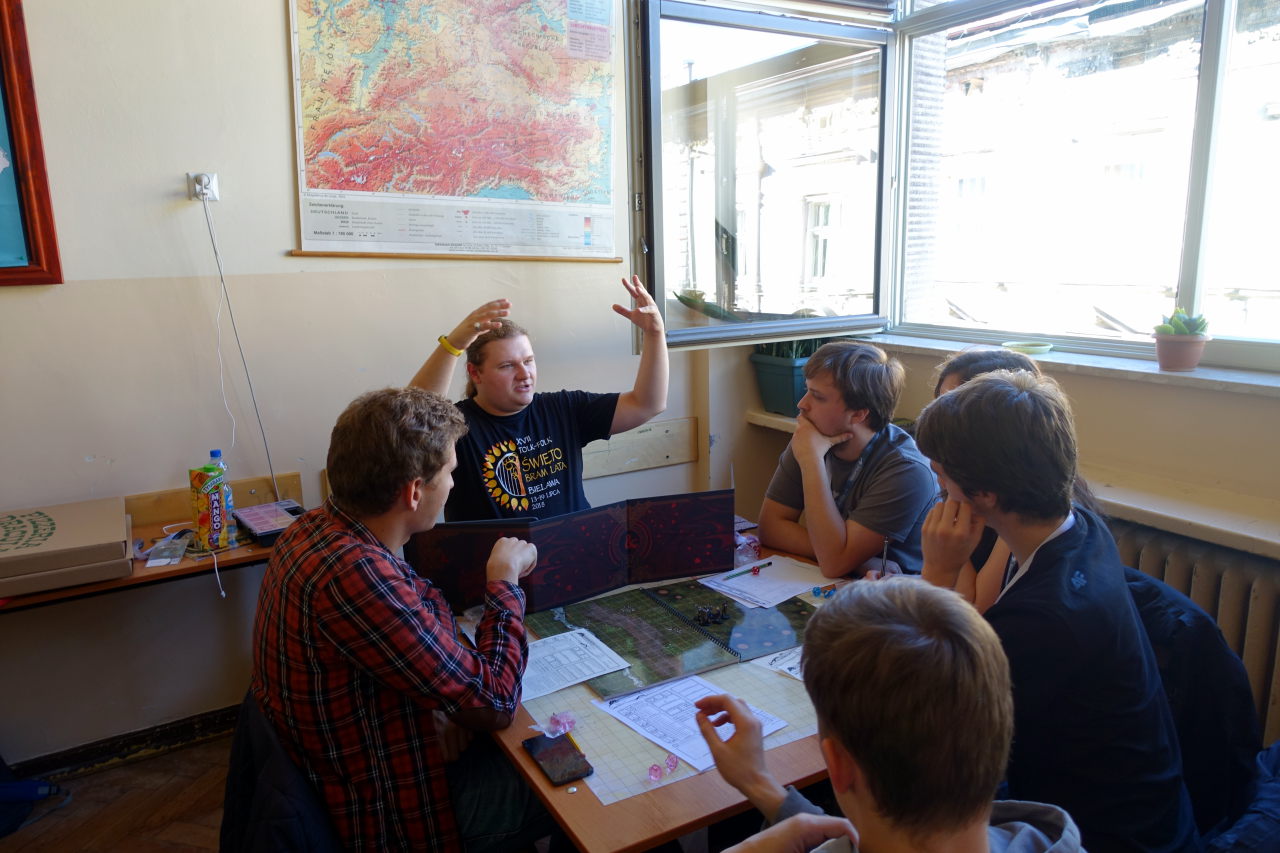 I don’t have any picture to illustrate convention game at Imladris 2019 so I will illusrate it with an RPG session organized as part of D&D Adventurers League in Kraków.

I will not go into details of scoring points but, in general, playing was fun. I like events that are actively helping to mingle with people, because somehow it is often difficult for me to initiate a conversation. The game was great for this purpose – it helped me to approach people and ask them about the game. Some of those occasions resulted in shorter or longer conversations. Unfortunately there is a downside to such system. I heard about people who were not polite enough when asking for/scanning codes. I believe this should be somehow improved in the future.

All in all, I managed to score both in phase one (second place) and in general ranking (fifth place). I must admit that the winners had enormous amount of points and it seems that they must have spent a large part of the con on scanning all the codes. 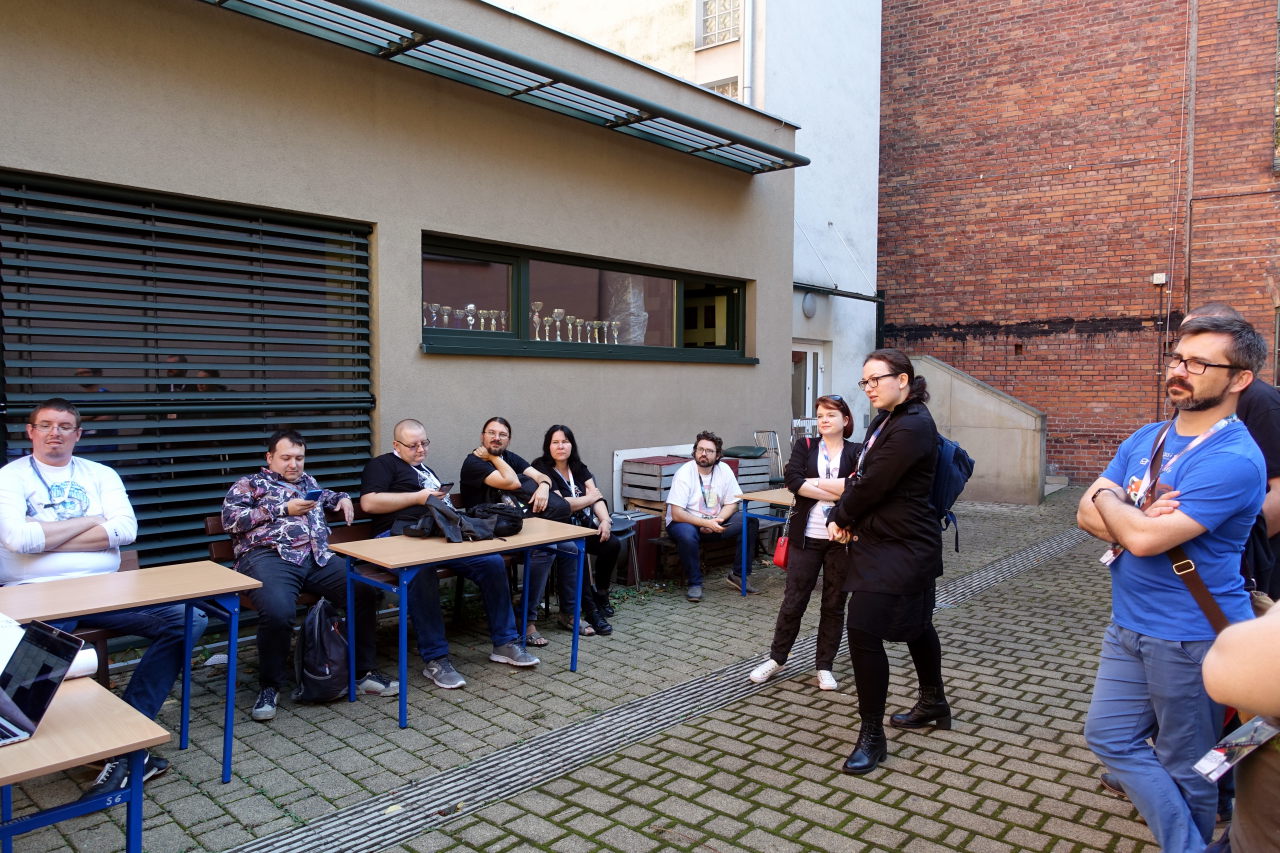 Feedback session about Imladris 2019 took place in the venue courtyard.

One of the most important programme items for me was the talk about Dublin 2019 an Irish Worldcon. It may be silly as I had visited it, so there was no real point in listening what others had to say about it, but somehow I really wanted to attend. The item was definitely too short (just one hour) and the topic was quite broad. It was not enough to just mention the convention itself, but it was also important to talk about Worldcons in general. For two of the presenters Dublin was the first Worldcon they attended and I was really happy to see how impressed they were with it. Attending this item was definitely a good idea. 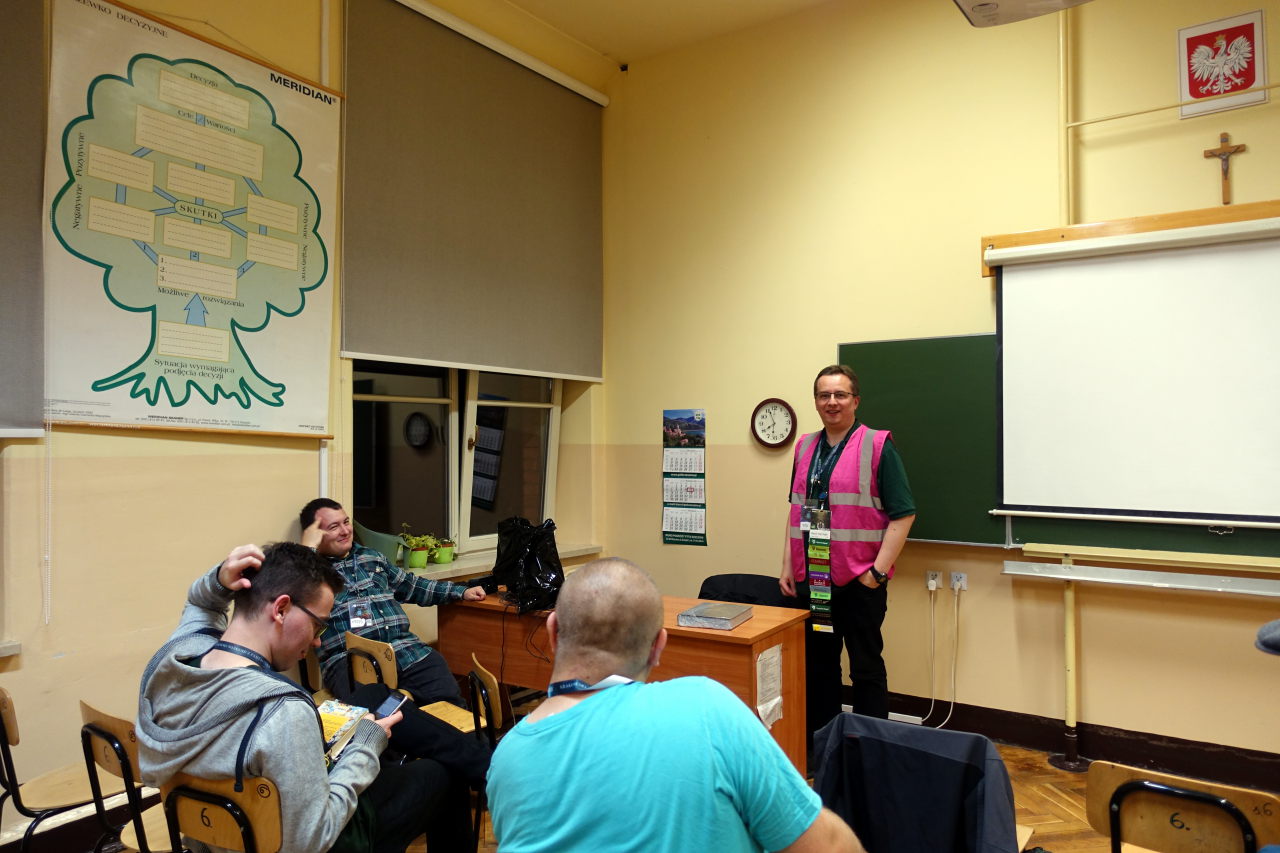 Seji just before the Worldcon 2019 panel. He took his Worldcon Hi-vis vest and badge with him.

During Imladris 2019 I attended some more talks and I even participated in one panel. In general, the level of programming was not even. Some items I found very interesting while some were disappointing. One of the items that was quite interesting was a discussion on the future of Imladris. The organizers wanted to understand if and what kind of changes would be appreciated by the members. As expected, the item was not really crowded but there were quite a few people and I hope we managed to help the concom in making some decisions for the future.

I enjoy the nice graphics

Similarly to last years’ Imladris, the 2019 edition had one picture that was used as a base for most of the graphics. This year it was a dragon magician and it was featured everywhere – on all the posters, website, badges, programme books, t-shirts… The picture is really astounding and I give all the respect to the author. 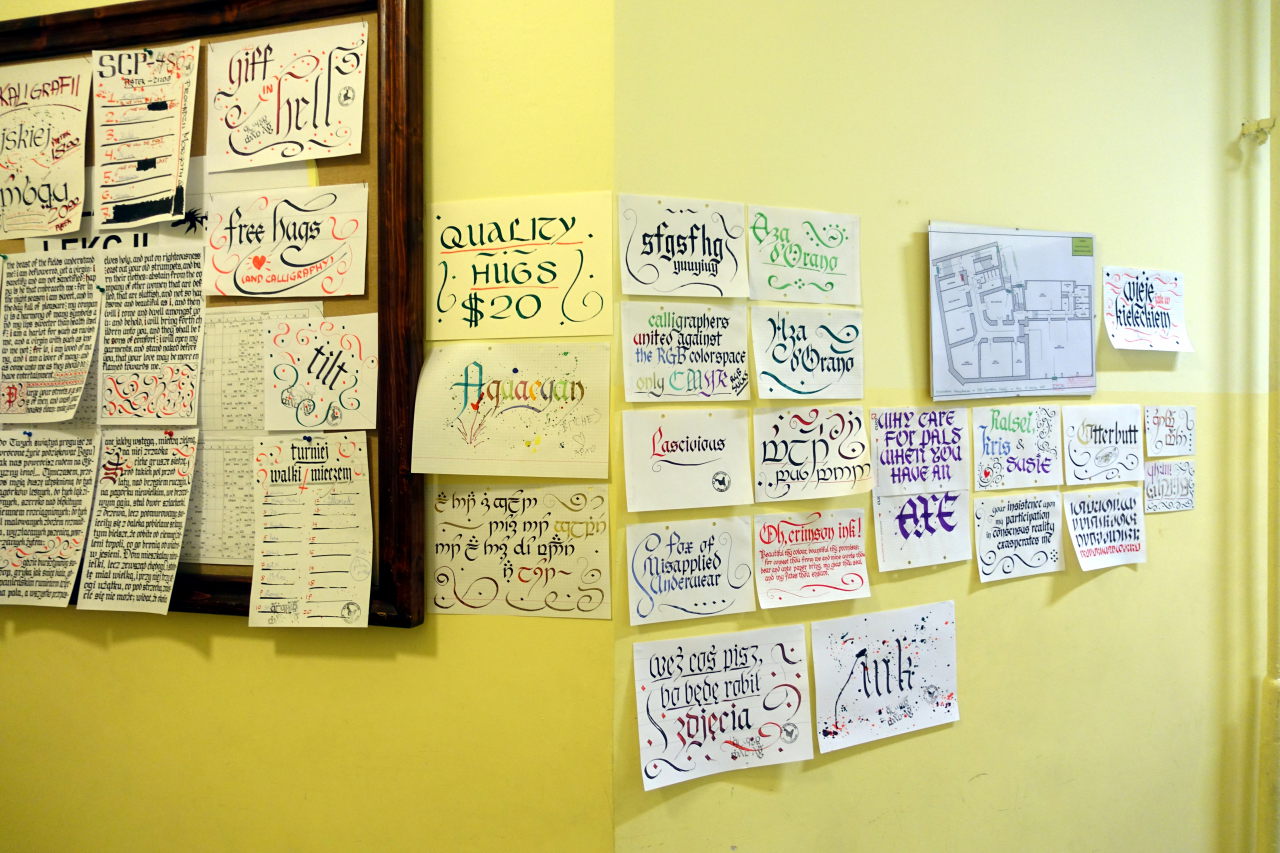 One of fans had a table where he was working on calligraphy. The results of his work were sticked to the walls around.

There is one more thing worth mentioning. It is a relatively common practise to have convention currency given away during contests, so that people can choose their own rewards from what convention has to offer. The last years’ currency was nice, but pretty standard. This year it was simply marvellous. Instead of using the regular printing technique, the currency had the form of laser engraved wooden coins. The good thing is that when you spent them they were just marked as used and returned to you.

There is one more thing that I want to mention. Since I have seen convention newsletters at Worldcons I missed something like that in Poland. It seems it was not alone, because the organizers of Imladris who had visited Dublin 2019 decided to create a newsletter that was published during the con. It consisted of three issues and I was really happy to see it. 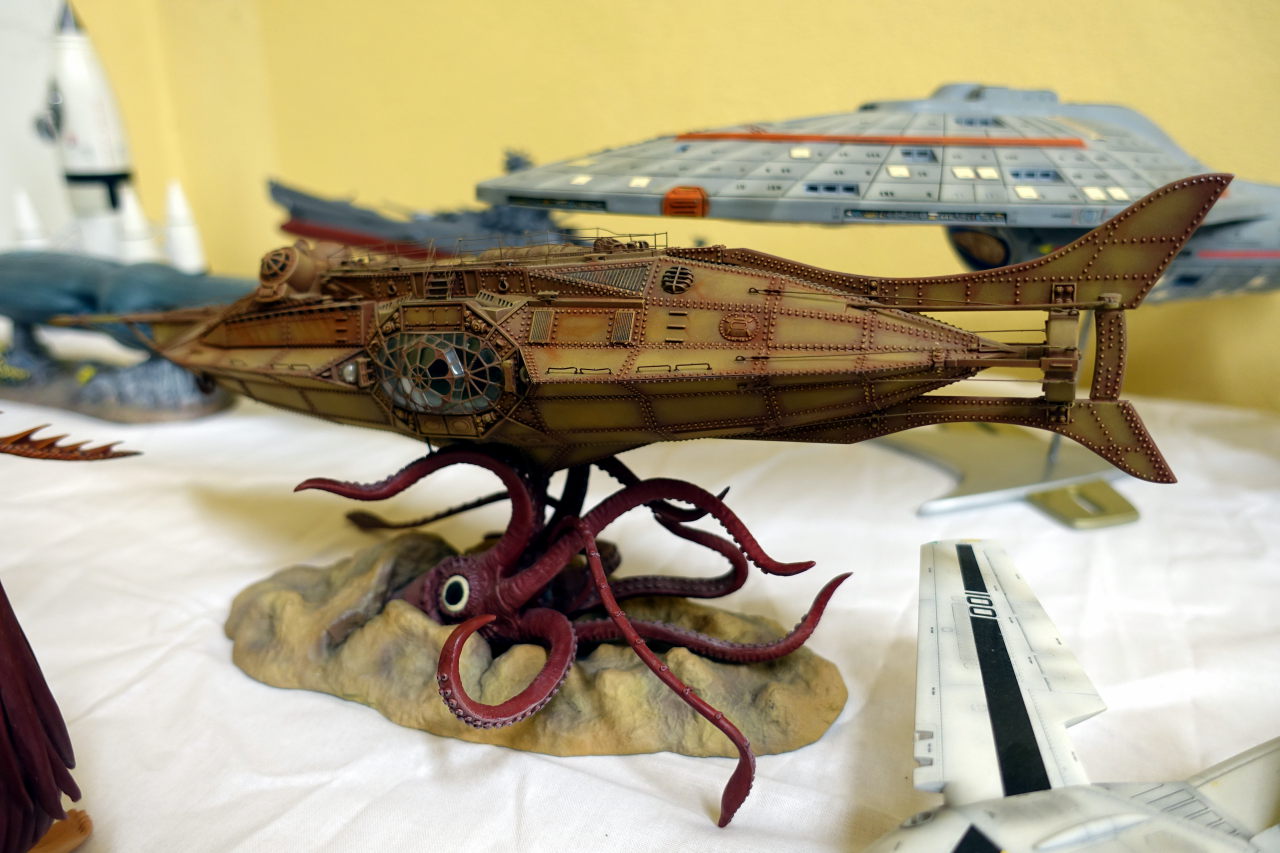 Part of the figure exhibition that was in the basement.

It was during Plansówki when I realized that Imladris would be my 200th convention. I was on the way to the Plansówki venue together with my friends (one of them being in the Imladris concom) and I decided that I would have to celebrate. This is why I baked a brownie for Saturday. I just wanted to spend the time with my friends and share some of my joy with them. And I did it but…

… during the evening at a pub I was asked to go some event (I expected the Karaoke beginning or something similar). One of my friends asked me to sit and started asking strange questions and I still was blissfully unaware of what was going on. Then I realized that the concom gave me a huge diploma for my 200th convention and a special enamel pin that was given only to organizers this year. I was so extremely happy and thankful (well, I was also feeling awkward but that’s a different story). I was simply speechless and was barely able to thank them. So here I want to take the opportunity to thank my friends again. You made a great convention that was really magical to me. Somehow somewhere between your duties you found the time and will to make this present for me – I am honoured and so very, very grateful for that. 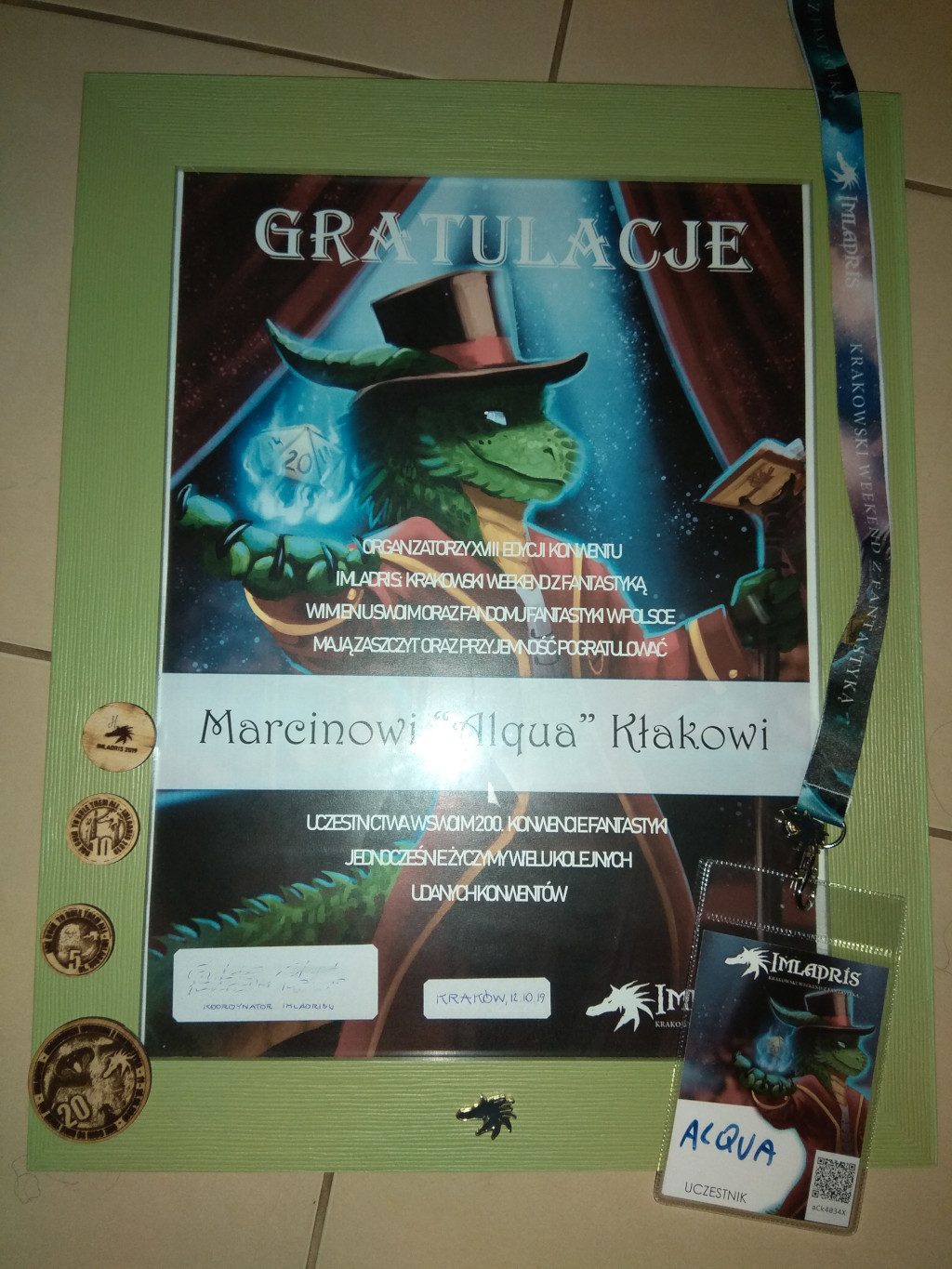 Diplomma I received during Imladris. It features convention drahon magician. To the left you can see wooden coins I mentione din section above.

I must mention here that Imladris conventions are very dear to my heart. I attended my first in 2003 and it was my first SF convention (before it I visited only eight manga and anime cons). Since them, I have seen some good and some not so good editions. I cherished each one of them and I felt attached to them. After the convention had ceased to exist some years ago, I was really sad and then when it came back to live – I was happy. Many times I helped to make Imladris happen – either through gophering or by being in concom or by participating in the programme. Now I am really happy that my celebration took place during Imladris.

Long evenings and the atmosphere

I already mentioned that I spent evenings in convention pub. It is not uncommon for me yet usually I do not stay for too long. This year I somehow ended staying longer than usually. I was so immersed in enjoying the con it was difficult for me to leave the place. The only reason why I did was the awareness that I had to wake up the next day. 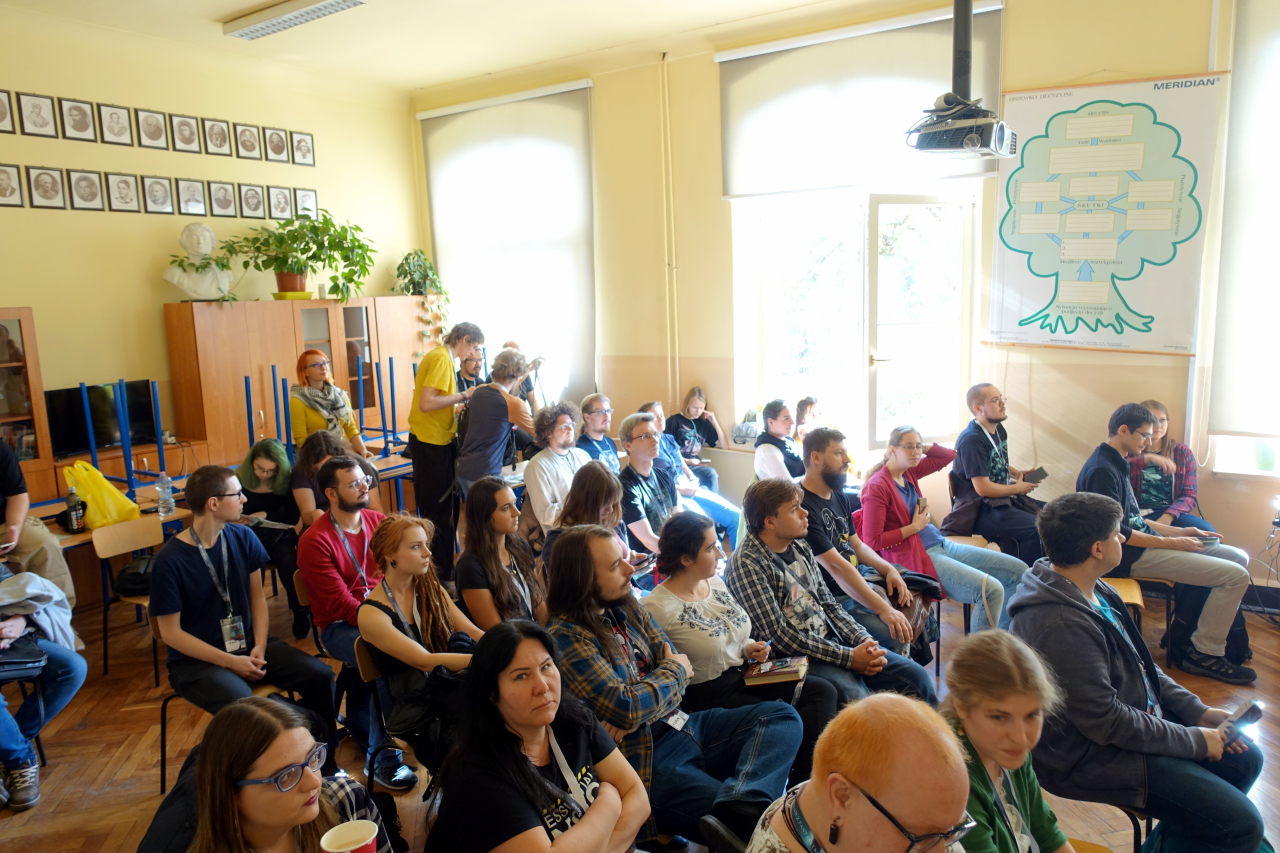 Despite pub being full in the evenings programme rooms were quite full duuring days.

The atmosphere that I felt at Imladris 2019 was somehow similar to the one I remembered from my first Imladris in 2003. Many things changed for me over those years and I usually approach conventions differently than before (yet still with great love). I cannot distinguish how much this atmosphere depended on how Imladris had been made and to what extent it was related to my awareness of the number of cons I visited. I am sure both factors contributed. The fact is that what I felt was similar to the “good, old times” and also refreshing at the same time.

The post turned out to be longer than I expected but this corresponds well with Imladris 2019. I enjoyed myself immensely and the con will stay with me for a long time. I know I told this before when describing previous Imladrises but I really need to come back to the concom and do something more for this amazing convention. It may not be the biggest and the programme is not the richest but the atmosphere is definitely one of the best.

The next post will be published on 11th November.