Last month I attended Imladris 2019 – my 200th convention. It was a great jubilee and I am so happy it happened to be at Imladris. Since then, I spent quite some time thinking about my time spent with fandom and how much I enjoy it.

I remember pretty well how it all started for me. It was really a coincidence that changed my life. I read Lord of the Rings when I was twelve and I enjoyed SFF ever since. However, it took me many years until I learned about fandom. Somehow during summer of 2001 I started to watch anime Slayers that aired on TV. And in autumn I met some new people at school, including Kifle, who explained to me a lot about manga & anime and fandom. She told me about conventions and all the fun people are having there. She also introduced me to her friends and somehow, in March 2002, I not only attended my first convention, but also helped with it. It was DOJIcon 2.

Second Polish edition of The lord of the Rings – the one I read being twelve. Uears later I bought it to have in my colletcion.

DOJIcon 2 was a small, one-day convention for manga and anime fans. I believe there were around 150 members including me. The two things I remember the most were working in the cloakroom and watching one anime series. It was called Ayashi no ceres and I enjoyed the first three episodes that were aired. I remember I promised myself to watch the full series (and I never did!).

I don’t remember the moment when I realized “this is my place on earth” but this moment probably was then and there. What I remember though, is that I was happy and willing to participate in more conventions yet I had to wait for six more months until we held DOJIcon 3… 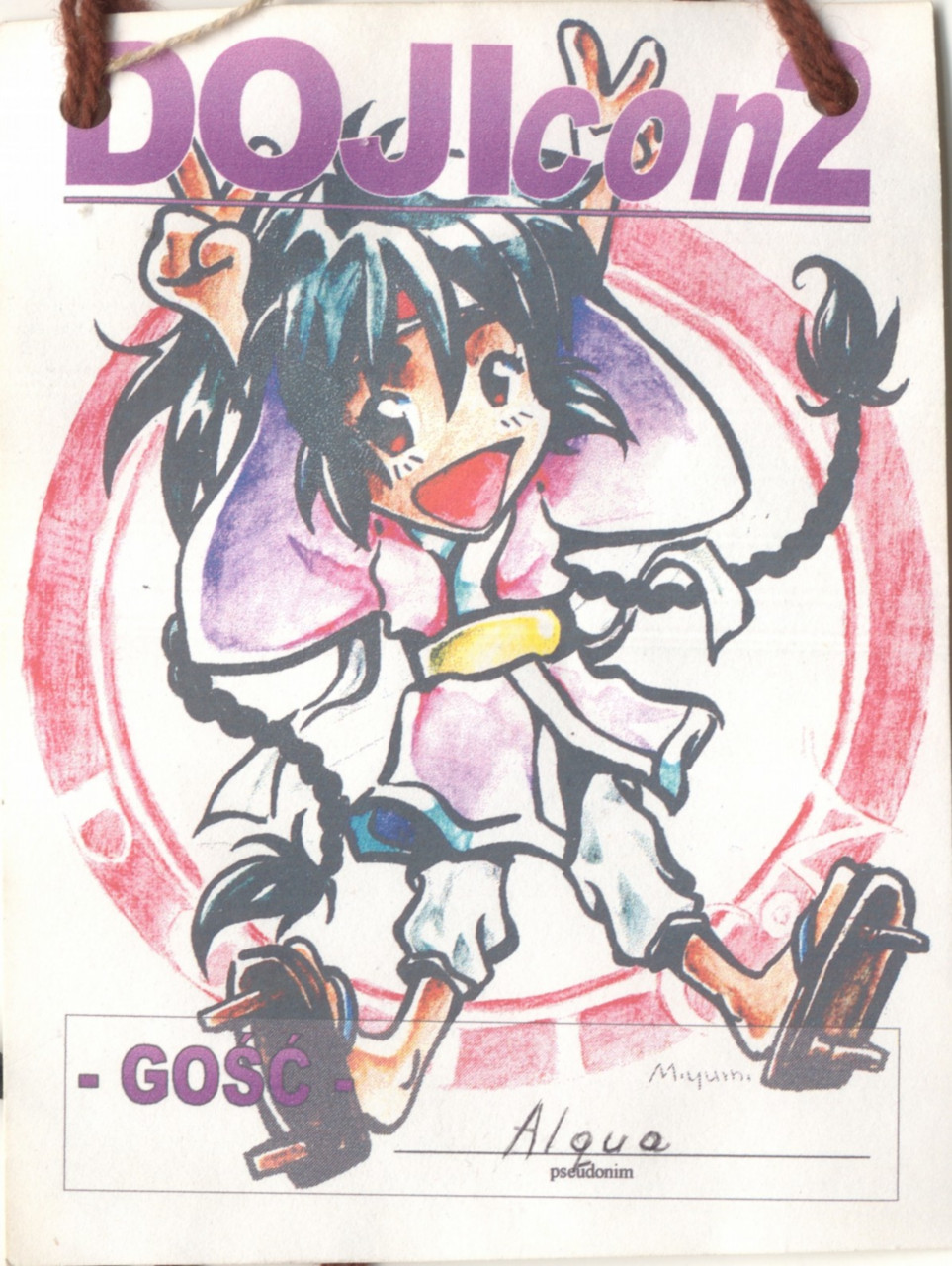 My very first convrention badge – the first step on my journey.

As I mentioned before, I helped a little bit at DOJIcon 2. Half a year later, at DOJIcon 3, I was a part of the concom. This time the convention lasted for two days and was held in another venue. We prepared a special issue of our fanzine (called DOJI) that was given out to all the members. The roles and responsibilities at this con were not well defined. And truth to be told, preparing a manga convention in Poland in those times was not such a big deal. Multiple mistakes were made, but again I had a great time at the con. 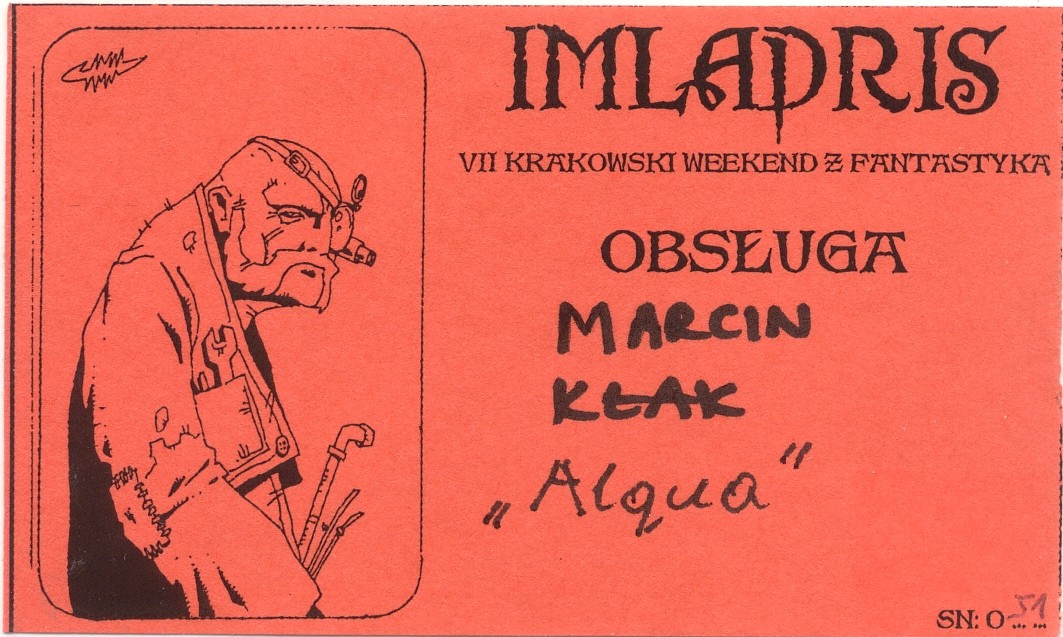 Later on, there were some conventions where I participated as a member (or dealer, as we had to distribute our fanzine) and then I was dragged in “deeper”. When I look at my convention list, I can see that I was a gopher at Imladris VII (autumn 2003) and since then for quite some time I started doing more things. At most conventions, I was either a gopher, a programme participant or a part of the staff. In 2004, I chaired my first convention – DOJIcon 4.

As a comparison – the badge from this year’s Imladris.

In fact, DOJIcon 4 would be a financial disaster if not for one m&a forum where we advertised. It was a forum of manga publisher – Waneko. Its members decided to have their meet-up at our convention and it allowed us to break even (or be quite close to it).

Somehow after DOJIcon 3 our chairman decided to leave both the convention and the fanzine (and he was also its chief editor). I tried to continue both, but I failed with the fanzine (we had one or maybe two more issues). The situation was better with the convention. After I chaired DOJIcon 4, I knew I wanted more (and it seems that the rest of the concom felt comfortable with that). For the next few years, we held another DOJIcon each summer. Although I was officially a chair of the con, it was my friend – Mózg who did a tremendous amount of work and I think it is fair to say that we co-chaired it. 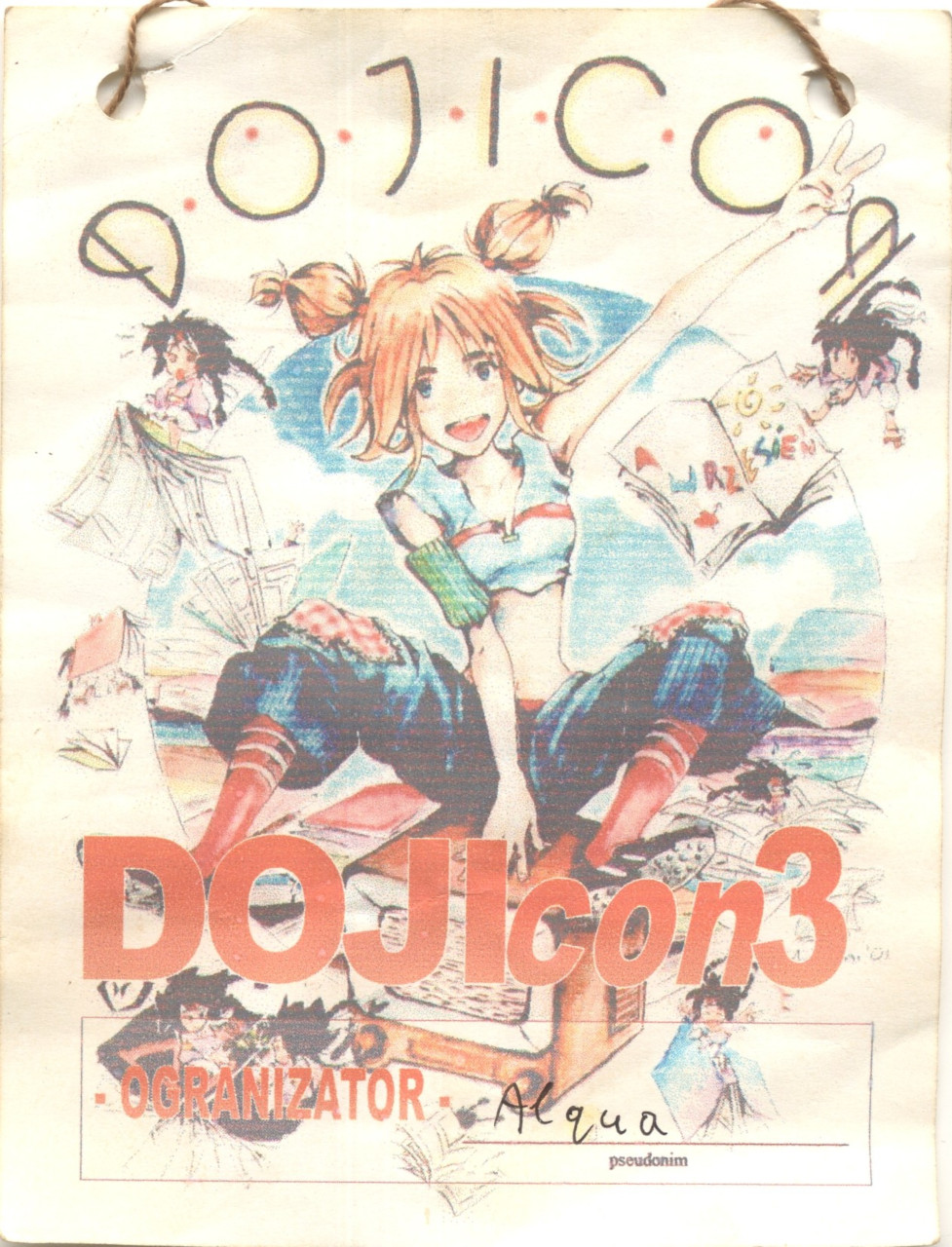 DOJIcon 3 badge. Similarlry to the badge from DOJIcon 2 the graphic was created by Miyumi. She was also artist who made a few covers for DOJI fanzine.

It is slightly funny as each “official” review or report from DOJIcons was neutral at best. Yet somehow people enjoyed the con. The fourth edition was around 150 members and then for a few years, we were almost doubling the membership numbers.

The convention was very popular. Members were really willing to help with the con and I must say it here: I am quite proud of what we achieved. Yet not everything was perfect and we made some mistakes. Although we had a concom, we were not prepared for me and Mózg to leave. There was no one fully prepared to take the convention further when I stepped down. We were also too strongly attached to it to leave it to someone else. When I was finishing my studies at the university, we made a decision to hold the last DOJIcon – it was DOJIcon 8. Due to the lack of time, we limited the number of memberships to around 300 and they were sold within 24 hours.

Opening Ceremony at DOJIcon 8 in 2008. Picture was taken by Kwak and was used with permission.

One of the things I really treasure from those years were people with whom I had the pleasure to work with. DOJIcon was somehow a small “family” convention. Even when attendance reached 1000 members I had the feeling I am doing it with “my family”. After DOJIcon 8 for quite a few years both me and Mózg were asked when will be the next DOJIcon. For a few years people were offering us their help should we held the next one. I still treasure those memories.

All are similar and all differ

I got a little bit sentimental in the paragraphs above, but the DOJIcons were really important to me. Yet during those years, I attended many more conventions – both m&a and SFF ones. I will not describe all of them here. Even if I would like to, I don’t remember everything well enough. 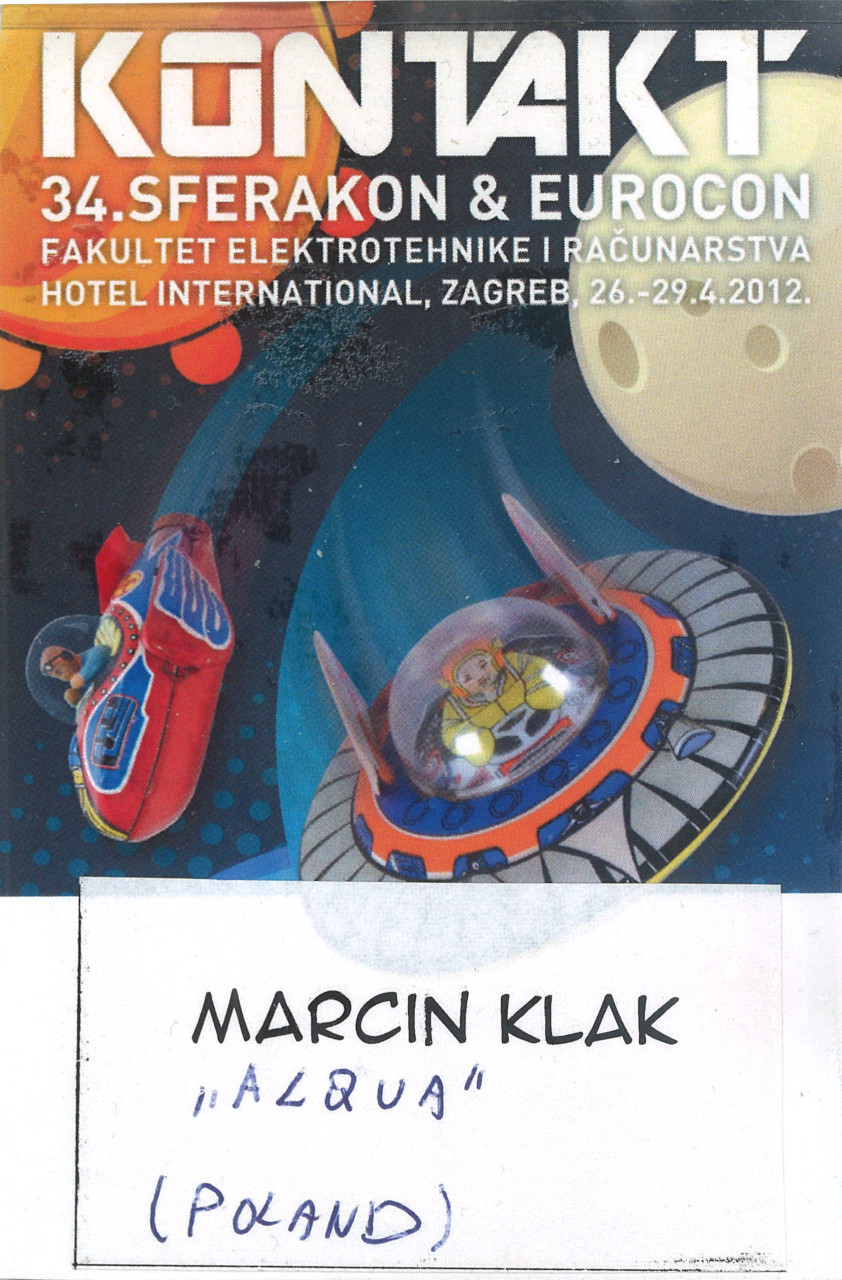 Kontakt Eurocon in Zagreb (2012) was my first convention abroad.

With each convention I attended, I was feeling more and more attached to fandom. Somehow over the years fandom became one of the most important things in my life. I have memories of so many conventions. Yet I don’t remember each and every single one of them. The problem is especially with the cons that I attended regularly. Quite a few of them were held in the same venue for many years and it is difficult for me to recall what happened which year.

All around me are familiar faces

When I attended DOJIcon 2, I only knew six people there. Over the years, I met hundreds or even thousands of fans. I exchanged just a sentence or two with some of you. With others – we became friends for many years (and still are!). I believe that my teenage self would be surprised to learn that most of the people who are around me right now are friends I met at conventions or through common friends I met at conventions.

There is something magical about meeting other fans. We may see each other for the first time, but quite often we feel as old friends. For many years people I met offered me their time and minds. When I went for my GUFF trip a year ago, I didn’t know most of my hosts yet everyone was willing to host me and share their time with me. I still feel very grateful for that. And when this year I had the chance to host Geri during her TAFF trip, I was so happy that I could give the same in return. I think that the strength of fandom lies in giving – we all want to give something to each other. 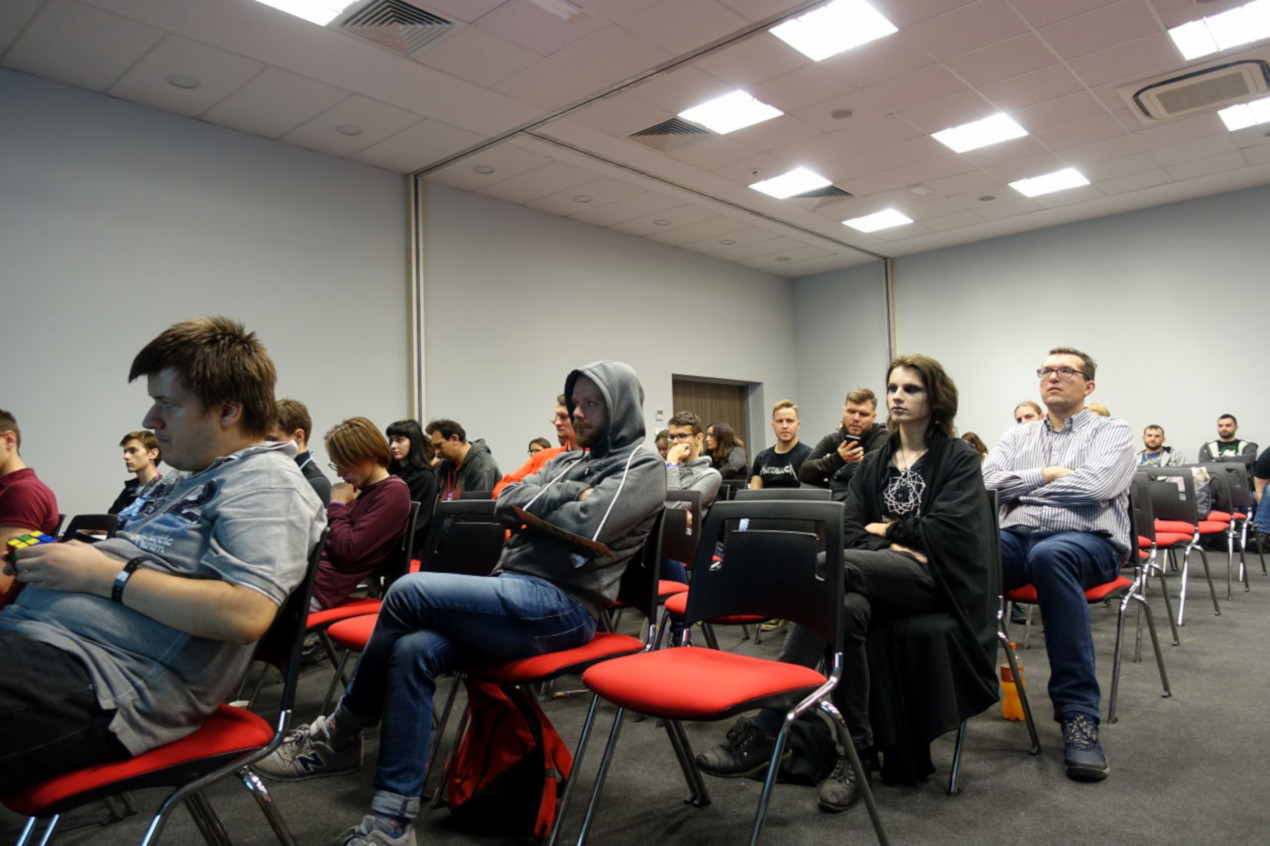 I have been attending conventions for almost eighteen years – around half of my whole life. During this time I have seen many great events and some that were not so superb. I know that I want to attend many more. When I am not able to go to conventions for some time, I start missing them. So for now, I know that I will keep going and I really, really hope that this passion will last for many more years.

So let’s meet at some con and talk 🙂

The next post will be published in December and will treat about Falkon 20.