The previous Falkon had not been such a great experience so I had slightly mixed feelings about attending it this year. Yet somehow, going to Lublin for Falkon has been my tradition so I decided to give it a try. I must admit that I was also tempted by the name, Falkon 2.0, suggesting it won’t be just a 20th Falkon but also one with some new quality to it.

When compared to the previous year, Falkon 2.0 was better. I think that I observed some improvement in most dimensions and this is definitely a good thing. There was one major exception though (and a few smaller ones). The exception was the RPG part. Last year, there were 2 RPG programme rooms and this year there was only one room prepared. Moreover, the Saturday programme in this room ended at 4 PM. Still, the majority of issues I faced last year where solved and I am happy about that. 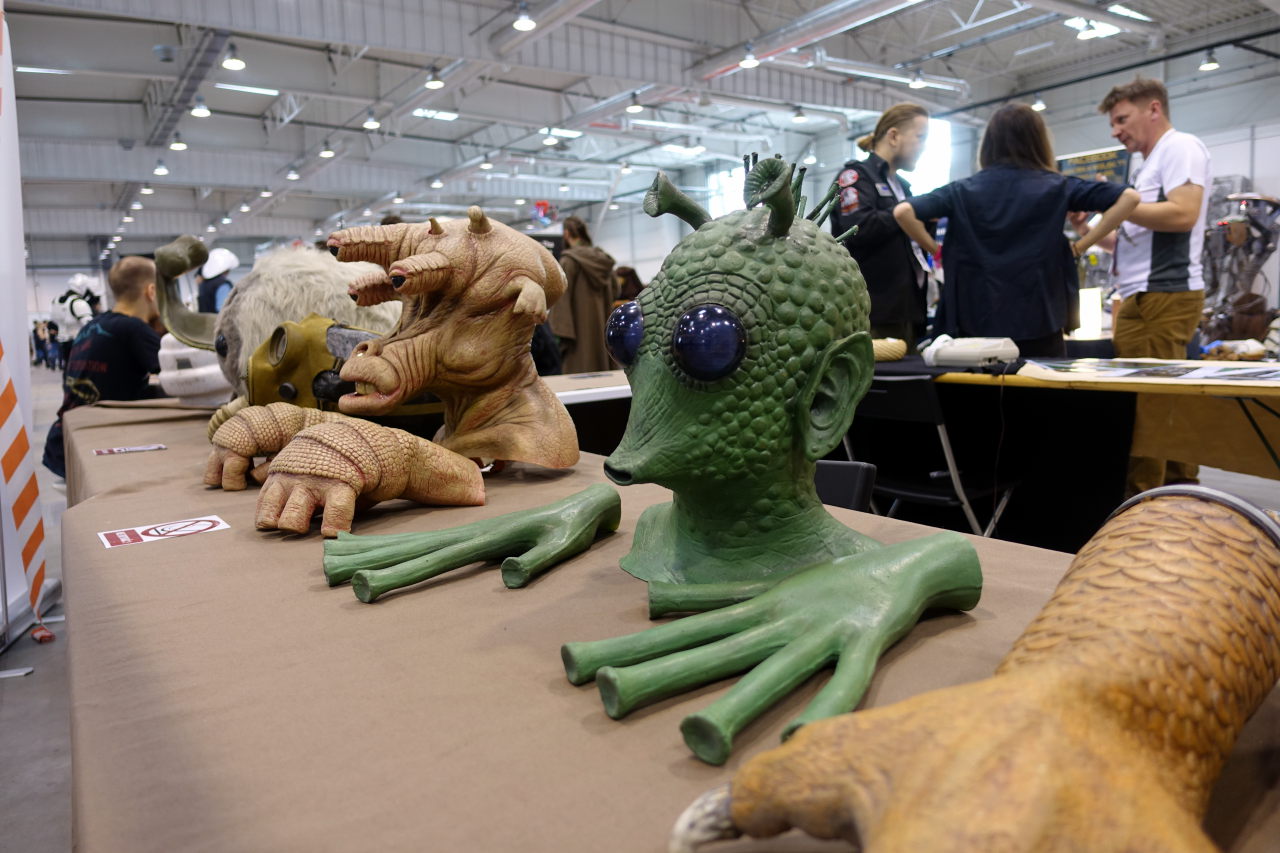 Part of the Star Wars exhibition located in Dealers’ Hall during Falkon 2.0

All in all, I am really happy I attended the 20th Falkon. I had a great time with my friends – some of whom I haven’t seen in a long while. As long as I can remember, Falkon has been a great social occasion and it was the case this year as well. Both in the convention venue and outside of it, there were plenty of occasions to mingle with people. Unfortunately, I had a headache on Saturday and because of that I missed the evening pub meeting that day… 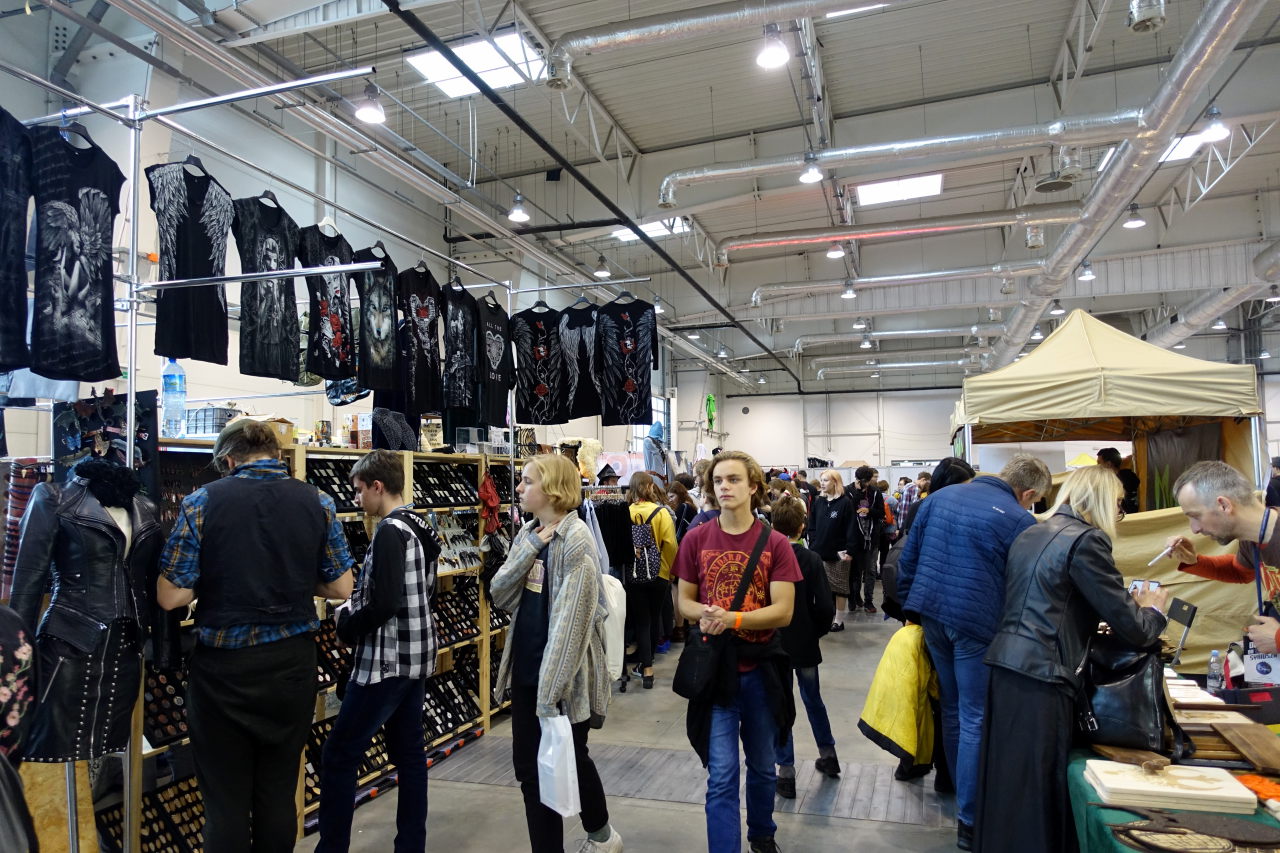 Although I arrived late on Friday (I had to finish work first), it was still possible to spend some time at the convention. I did not have the opportunity to attend programme that day, but I went to dealers’ hall to on one hand see what was there and on the other hand to meet my friends (a few of them were dealers). On Saturday and Sunday, I had much more time for both programming and meeting with people.

Programme was not fully to my taste

When I took a look at the programme, I was slightly disappointed. And it was not because of the programme quality, but rather because of how it missed my taste. There were quite a few items that seemed promising in general, but they were not meeting my interests/mood at the time. All in all, I found a few that were interesting to me and I must say I enjoyed them.

I really need to mention two of the programme items. The first one was about the genesis of humanities. The topic was interesting and the lecturer was really knowledgeable. Some kind of summary was missing at the end, but nevertheless it was a really interesting and eye opening talk. The second one was a comparison of Chernobyl and Fukushima Daichi disasters. Really nice talk with some interesting food for thought at the end. 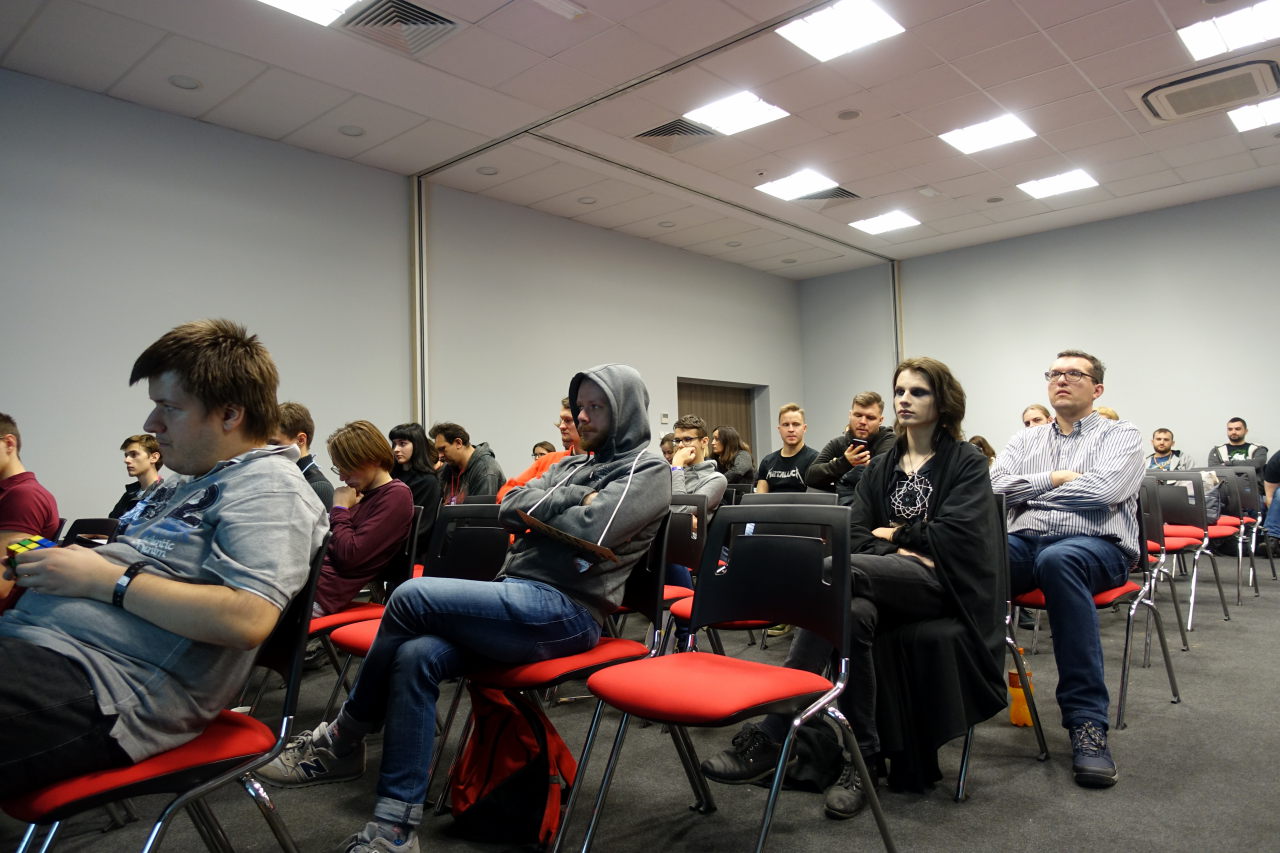 Audience during talk on history of humanities.

I had the pleasure to participate in two items. The first one was my talk about Fan Funds. Unfortunately, very few people attended it. The other one in contrary had a full room – it was a panel discussion called “Human cloning, gene editing and other aspects of near future”. I had the pleasure to moderate this one and I had four panellists. The discussion was really fascinating and my concerns proved right – one hour was definitely not enough time. I do believe we should repeat this topic at another convention. 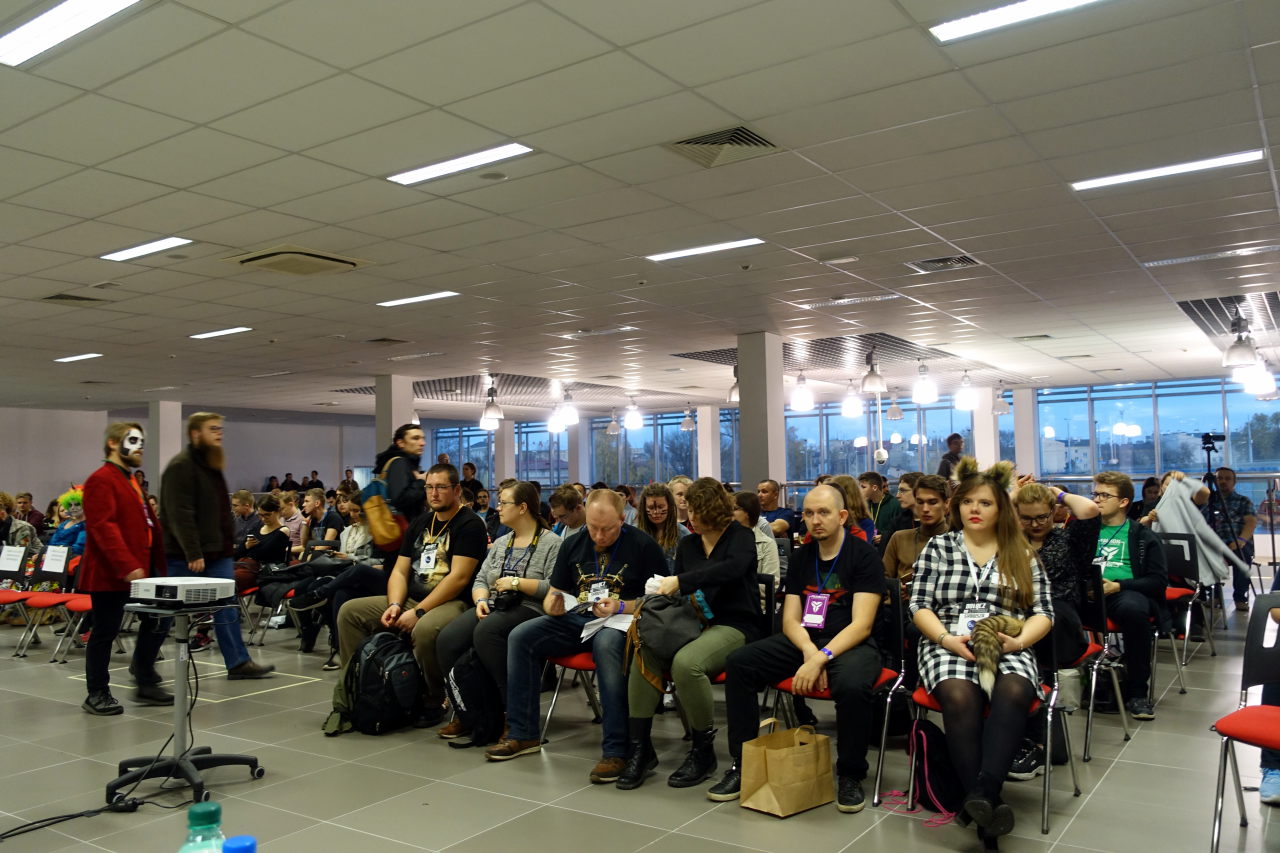 Just before Human cloning, gene editing and other aspects of near future started.

Before the convention, I had some expectations ignited by the naming. Falkon 2.0 suggested we can expect some novelty and a new approach towards many things. Unfortunately this was not the case and I was really disappointed by that.

Queue to the registration.

Falkon this year was really similar to what I experienced in last few years. Of course certain things were improved (at least upon comparison with 2018) but all in all, it was exactly the same event. It was not a bad thing, but the name seemed to promise something different.

Both the fact that it was the 20th Falkon and the name “2.0” made me wonder about this particular convention’s history and my experience with it. I attended my first Falkon in 2010. At this time, Falkon was a different convention – firstly it was held in a university and not at Lublin Trade Fair. It was also much smaller, but in my opinion the programme was significantly better. I recall that I was really amazed by the programme in my first years – before the venue changed. 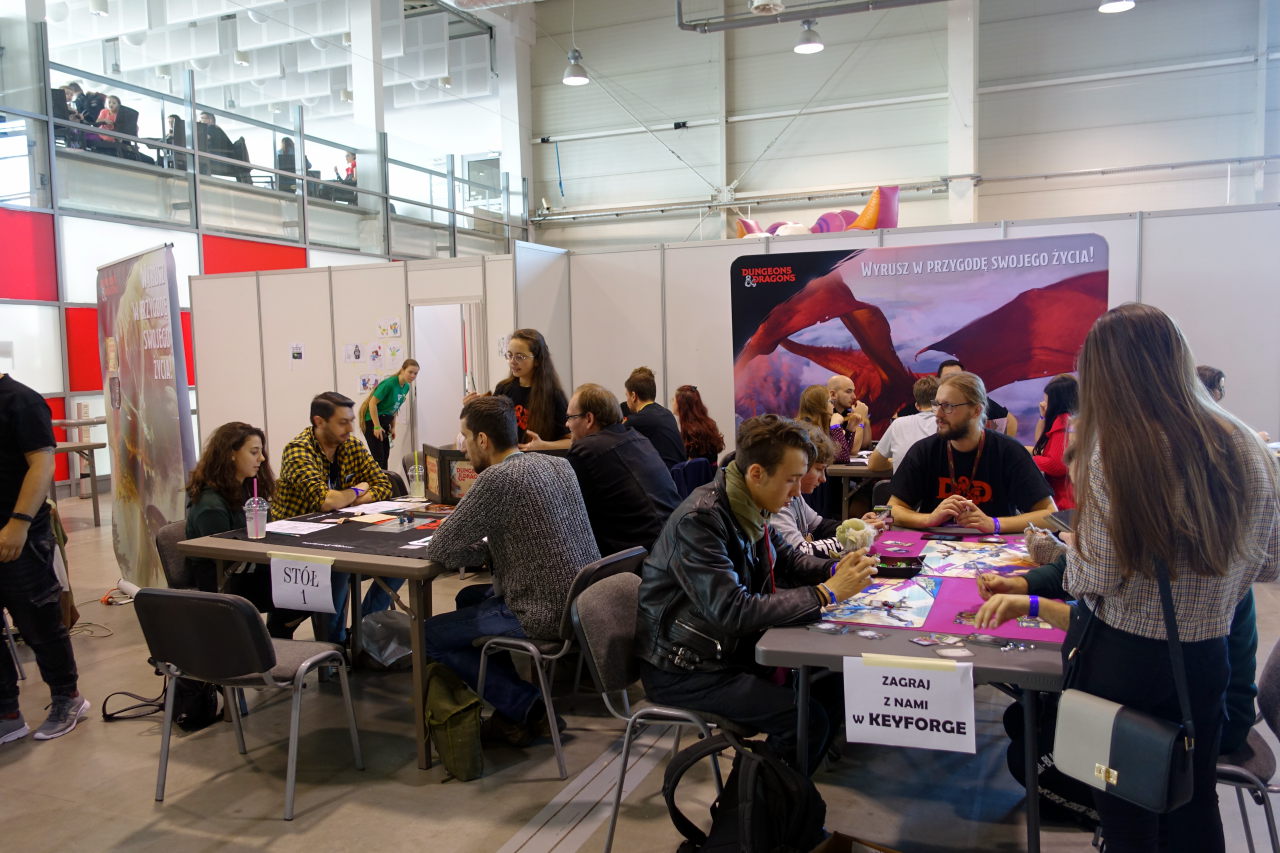 What I missed this year were the foreign guests. I don’t remember how often Falkon was able to invite writers from abroad, but I really treasure my memories from the year when Peter Watts attended it. This year, there were over 40 guests but none of them from abroad. Considering the size of the con (over 12,000 visitors) it would be really cool to see some international guests each year.

So how good was it?

When looking back at 20th Falkon, I am somehow disappointed. I had a good time, but to a large extent it was not due to how well the con was organized. The main issues from previous year were sorted out, but in general, I have to rate the convention as below average. Considering it is the second biggest fan convention in Poland, I have relatively high expectations and they were simply not met. 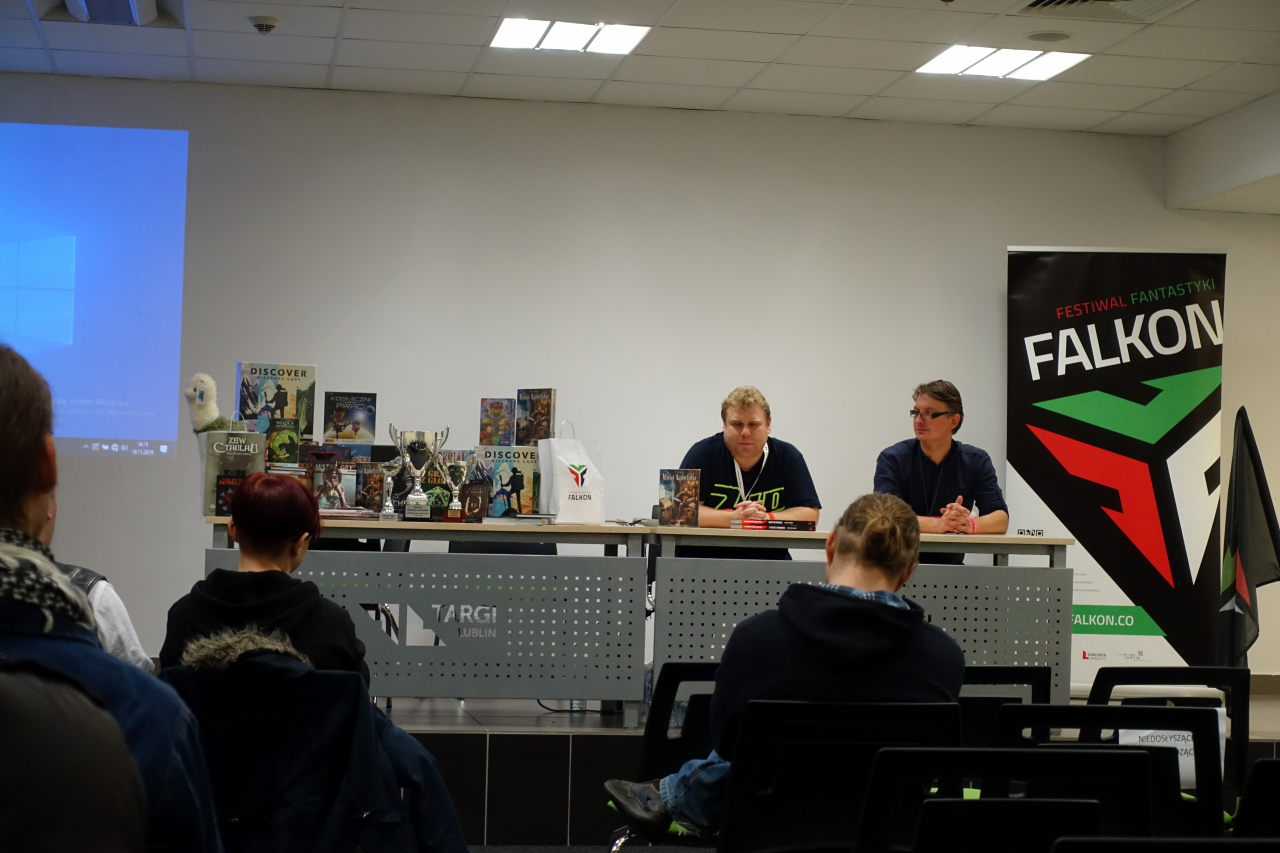 I am not sure about attending next Falkon in a year from now. On one hand, I really like this convention, on the other – it is not meeting my expectations. If it would not be for the people I met at the con, I would probably regret coming. I really hope that organizers will show some new ideas the next year so that I will be tempted to go again.

The next post will be published on 18th December.