I have been reading some Australian fanzines recently. I checked mainly Wild Goose by Roman Orszanski and iOTA by Leigh Edmonds. The 15th issue of the latter somehow reminded me of the fanzines I used to contribute to. Well, it is a good inspiration, I believe, especially since fanzines appeared as topic worth discussing during my GUFF trip.

The group which dragged me into the fandom was called DOJI. It was a group of manga and anime enthusiasts that published DOJI fanzine (the name was inspired by a Japanese term dōjinshi, meaning “fan magazine” or “unofficially published mangas”). They used to organize a convention that was called DOJIcon. It was back in 2001 when I became a big fan of anime Slayers (that aired in the Polish TV). And at the same time I met Kifle, who was a member of the DOJI team. In late 2001 and early 2002 she told me about fandom, fanzines, conventions, fanarts, fanfiction and so on. 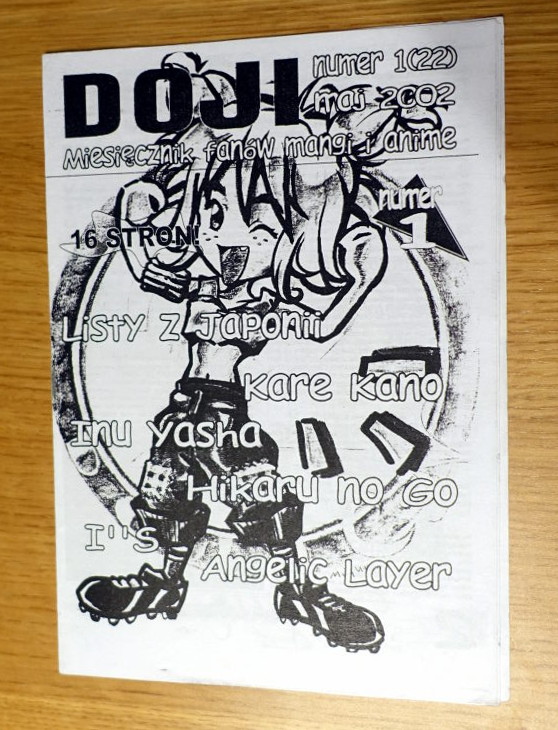 22nd issue of DOJI fanzine – one of the oldest one I have.

The moment I learned about all the fannish stuff, I somehow started to actively participate in it. That was such an awesome time. I had to learn everything. Each word was completely new to me and each of them opened a whole new world in front of me. But I did not get dragged into all fannish activities. I tried fanfiction, but it was not my thing (maybe because I read bad fanfiction?). I enjoyed fanarts but as I am not an artist myself, I did not create them. But then there was something I was able to enjoy actively – conventions and fanzines. I never became very active in the fields of fanzine creation and collecting, yet I had a few adventures with them and I am really happy about that. 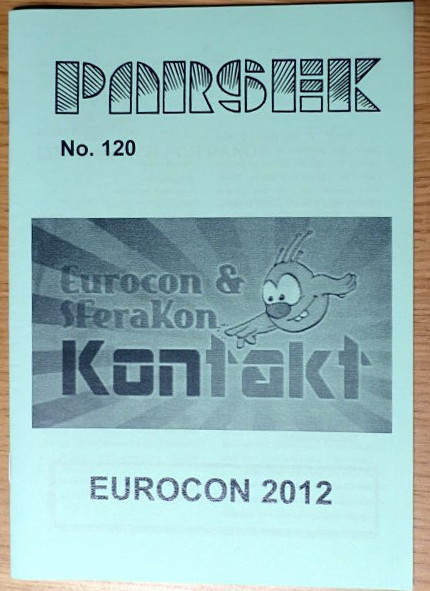 One does not simply staple zines

One of my contributions to DOJI was a series of articles in which I connected my two great passions – the love of manga and the love of SFF. I wrote a couple of texts titled “Tolkien vs Slayers” where I compared certain elements of the worldbuilding between those universes. I looked at magic, dragons and a few other aspects. Those were pretty naive texts, yet it was fun to write them. And it was fun to have them published and shared with people. 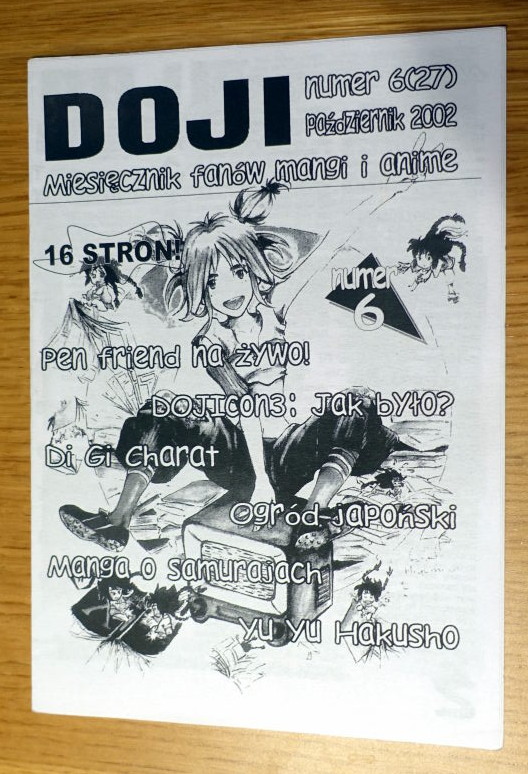 27th issue of DOJI – you can see that the copying quality was improved.

The really difficult part of the fanzine creation process was already gone by then. We didn’t have to use duplicators – we were able to prepare DOJI on PC, print it and then go to the copying facility to have as many copies as we wanted (usually not so many, in fact). Yet, there was one important thing we were missing – a long reach stapler. We had standard staplers, but as DOJI’s format was A5, we were not able to staple it properly. I recall that one day we had the new issue ready and we had a “stapling” meeting. First, we had to collate the copied pages and then bend them and, finally, use the stapler. The first steps are quite easy and fun but the last… We did some experimenting, I think, and we came to the conclusion that the best option was to open the stapler and use a pouf. The open stapler was used to insert a staple into the paper spread on the pouf and then we had to manually bend the staple “legs”. I remember only one such day so I suppose that maybe sometimes we actually had access to a long reach stapler… 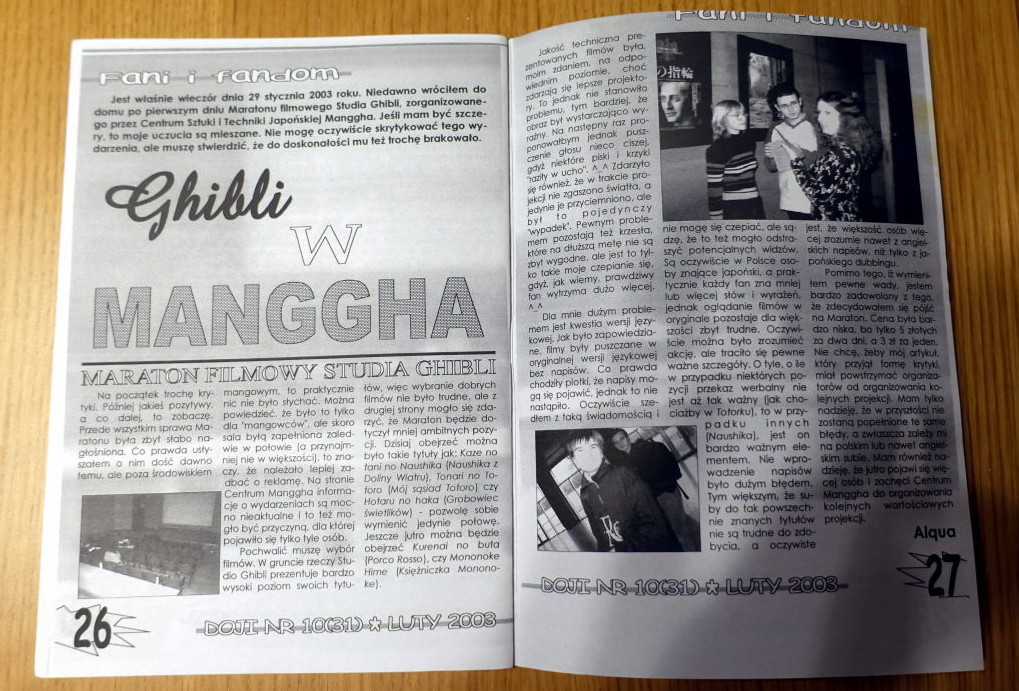 One of my articles published in DOJI. The text is about screening of multiple Ghibli movies in Manggha museum in Kraków.

The road goes ever on and on

At one point, DOJI simply disappeared. The chief editor resigned and I tried to take over his responsibilities it, but I think I managed to prepare only one or two issues. The next issue is almost ready and has been waiting on my PC drive for the last 10+ years… Part of them were used to create special issue a few years ago when the “old style” manga convention called Doubleback took place. Those were not the best times for printed fanzines in Poland. I think that all those that appeared when I was working for DOJI disappeared within a few years. Probably we should blame internet for that. Many years have passed before I started to contribute to another fanzine. In 2015, we established Smokopolitan, an SFF fanzine that was published both in print and on-line (as pdf, epub and mobi). This was completely different experience than DOJI. It was much closer to a professional magazine with the big difference that no one earned anything on it. Smokopolitan was much thicker than DOJI (reaching even over 100 pages). It contained not just a few articles, but also a few short stories in each issue. We had professional editors and proofreaders (as well as the non-professional ones) working with texts. Lastly, it was printed at a printing house and published in a similar form to a softcover book and not like a pamphlet (as DOJI was). Yet the one important thing remained similar – we made this fanzine for the joy of sharing our love of the hobby. I think that this is the most crucial part of fanzine creation. 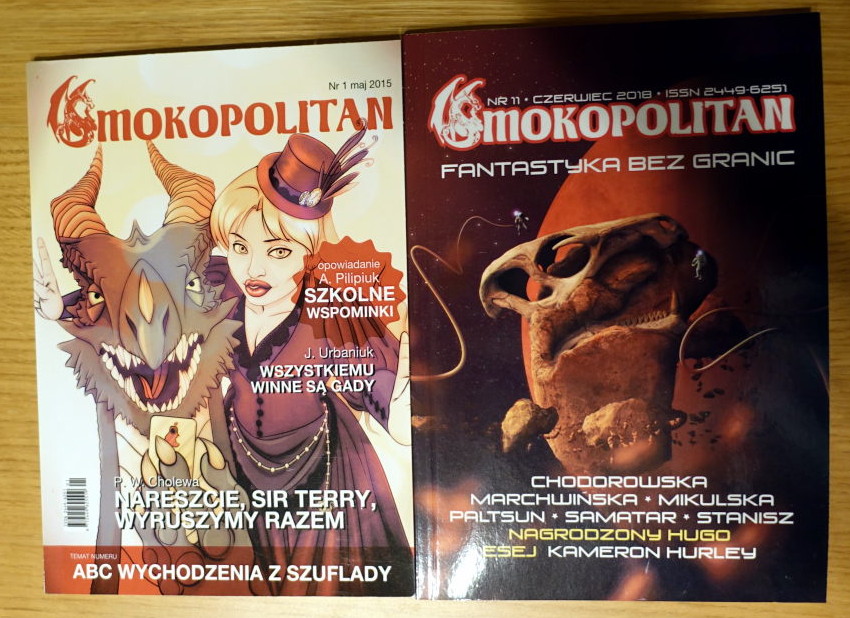 First and eleventh issue of ‘Smokopolitan’.

The circulation of Smokopolitan was much higher than DOJI. The latter was published in a two or three dozen copies. One issue of DOJI had over 300 copies, but this was the one we distributed for free at DOJIcon 3. The other issues had to be bought for a price that was equal to the printing price. The first issue of Smokopolitan had, including reprints, a few hundred copies and it has been downloaded almost 5,000 times until today. We had one issue in English that we handed out during Eurocon 2016 and Worldcon 75 (and it is available for download in PDF, EPUB and MOBI). Unfortunately, at some point in 2018 I had to leave the team due to a few reasons, including the fact that Ialmost had not contributed to the last two or three issues. And now, it has been quite a while since the last issue so I am not sure about the Smokopolitan’s future. However, before I left, I knew that one English issue was almost ready, so I hope that at least this one will be published in future. 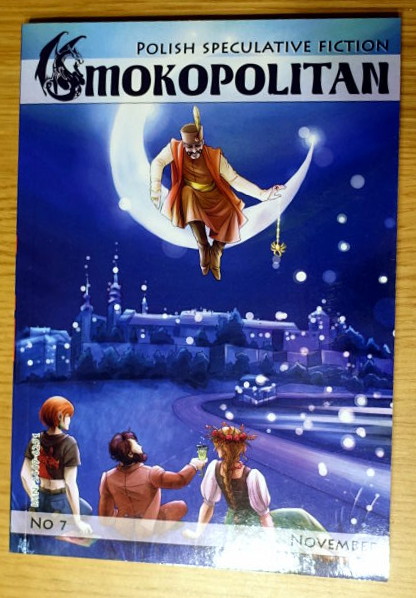 These are the highlights in my fanzine adventure. I had some other “appearances” in a few fanzines as well. One of my blog posts was included in Concatenation and I keep sharing news from Poland with the team on a regular basis. Also Wolf von Witting added my Luxcon post to his Counterclock #29. Lastly, I published an article in Spotkania losowe (Polish RPG fanzine). These are however only minor contributions, since I am not really deeply involved with the fanzines. I hope that I will start contributing to a fanzine in future again, as it is simply a good thing to do.

My next post will be published on 27th March.