Imladris is a very special convention to me. It was my first SFF con back in 2003. It was also Imladris that was was my 200th convention two years ago. This is why I was sad that last year we didn’t have it. Instead there were regular meetings spread over the few months – yet it is not the same. This year however the team decided to held a virtual convention. The plans were to have an event smaller than usual.

Last year I was involved in making Imladris but it didn’t take place. This year I was not able to devote enough time and although I was there to provide some comments/advices I was not an organizer. Still I was quite close to the concom. Because of that and the points mentioned above I may not be objective.

The convention was not planned as a big event so the number of programme items was lower than usual. There was one programme track running for both days of the con. Additionally there three programme items that took place in the “second track”. Not a lot. But hey – it is not about the quantity but quality.

I must admit that I liked the programme. Not all of the items were to my taste (so I had the time for lunch) but in general I was satisfied with what was offered. The mix was interesting – a bit for many groups in fandom. There were some items related to literature, comics, RPG, pop-science and fandom. This was good. I do understand that people looking mainly for one topic may be disappointed but I liked this.

What did I enjoy? I must mention two items lead by the literary group of the SFF club I chair. The first was about the anthology they created (with help of people who are not group members). The second was about working together in a literary group. I liked what they said. I was proud about how this idea evolved over time and how active they became. It was good to be able to come as a spectator and listen about their achievements. 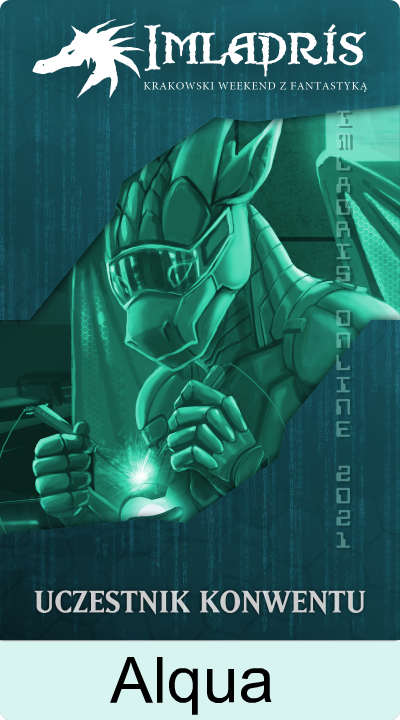 Imladris 2021 had a Discord bot that was generating a badge once one clicked on the convention role.

There were two extremely interesting items related to food. It is definitely not my specialization but I enjoyed how the presenter – Cypis led them. The first one was a look at the history of food. As it was possible to extend the item without blocking the room we stayed longer. In the end it lasted around two hours instead one – but we liked it. The second one was a live cooking experience combined with a talk about history of the dish. I learned something about Yorkshire pudding and I am willing to try it myself.

There were also other interesting items. I want to mention about Michał Kozubs presenting his research about online conventions. I hope that the two talks I gave (one alone and the other with Seji) were interesting to others. It is worth to mention that most of the items had relatively large audience. Of course not hundreds of people but twenty to forty fans is not bad for a small con.

The Venue and the Space for Socializing

For some years Imladris has a living Discord server so it was decided to hold the event there. It worked pretty well but there was one issue. Discord has the limitation that if anyone uses a camera only twenty five people can be in a voice chat. Because of that all cameras had to be turned off. It was unfortunate and I would love to see another system allowing us to not only listen to but also see each other.

The social aspect of the con was a bit problematic. Although there were some open spaces – both voice and text ones they were not heavily utilized. There were plans for evening socializing on both days and it worked though. People appeared (this time we could use our cameras) and we had some discussions. Part of them were related to history of the con. We even browsed through the pictures from the Imladris history. Everything was done I a way that we rather grouped in one room instead of splitting into smaller groups. It was not perfect but I enjoyed both evenings. I only regret people were not so socially active during the days but one cannot have everything.

So I am not objective – but I had a good time. I t wasn’t the best con of this year but it was visible that organizers put heart into it. The programme was strong and although social aspects were not as good I managed to spend a happy weekend with my fannish friends.

My next post treats about Hugo Award nominees in Fan Artist category.